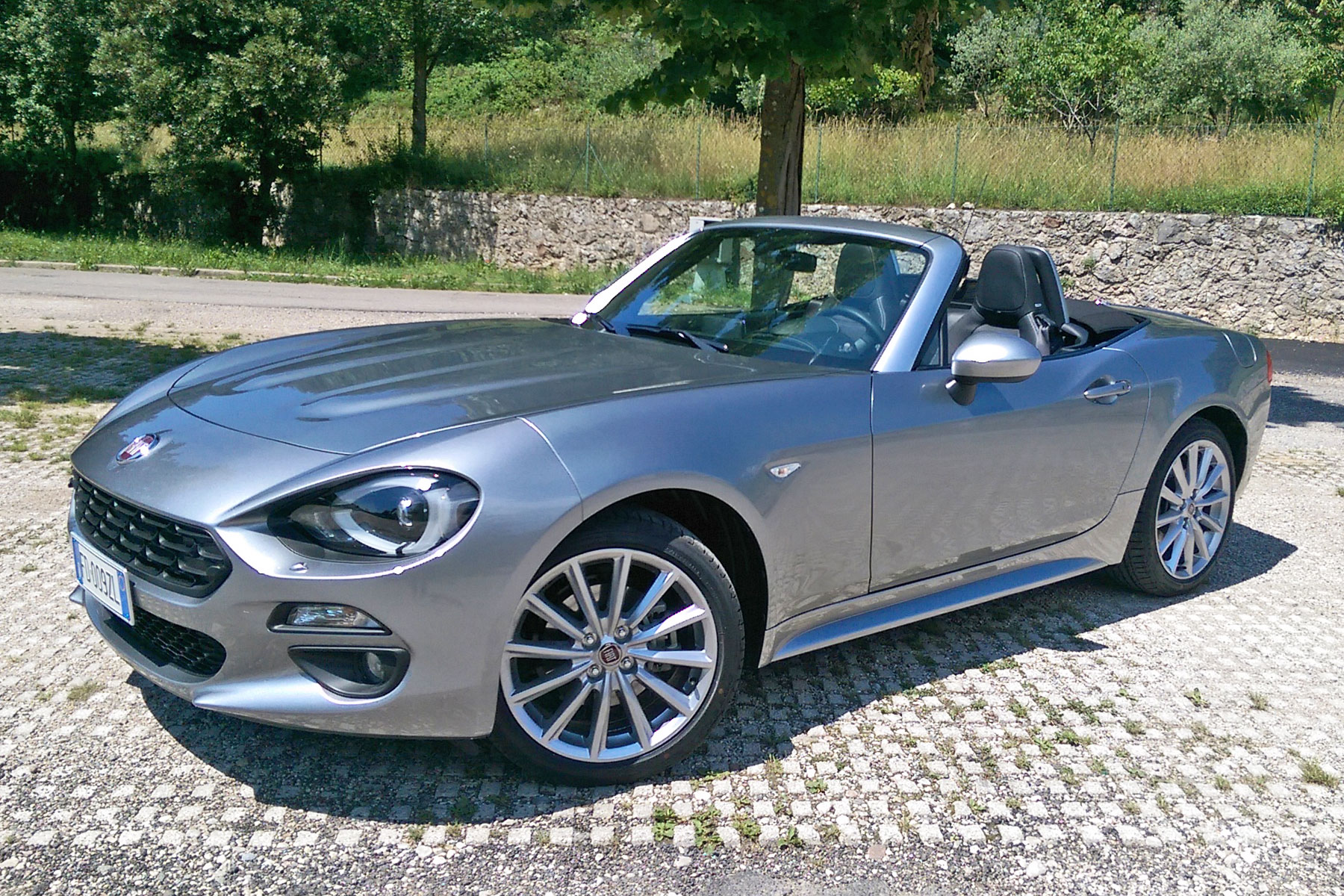 Before the days of overweight faux-SUVs and customisable city cars, if we’d said the words ‘Fiat 500’, you’d have pictured a cute little Cinquecento from the 1960s. The sort you’d expect to see in pictures of Italian restaurants – less than three metres long and powered by a two-cylinder air-cooled engine.

Then Fiat cashed in and introduced the new 500, and its subsequent offshoots the 500L and 500X. And what a success that has been for a company responsible for the less-than-aspirational Fiat Punto.

Retro works for Fiat. Which is why it’s bringing back the 124 Spider. That’s its sexy, Pininfarina-designed 2+2 sports car, which was built between 1966 and 1980. However, we do wonder whether the Fiat 124 Spider quite works as well in marketing terms as the 500. How many non-enthusiast Brits remember the original?

Like the Fiat 500, which shares a platform with the Ford Ka, Fiat went elsewhere to find a base for its reincarnated 124. Hoping to compete directly with the ever-popular Mazda MX-5, who better to work with than the experts? A deal was done, and it was decided that the two firms would work together to create the fourth-generation MX-5 and its Italian cousin.

Only it wasn’t that simple. The Fiat 124 Spider was originally mooted as an Alfa Romeo – but then Fiat boss Sergio Marchionne piped up something about Alfa Romeos only being created in Italy. And the deal precluded that the Mazda/FCA sports car would be built at Mazda’s Hiroshima plant in Japan.

So, like it or not, it’s a Japanese-built Fiat. But has the Italian manufacturer done enough to give the 124 some Italian flair? We headed to Lake Garda to find out just how Italian this sporty little number actually is.

It’s very similar to the Mazda inside 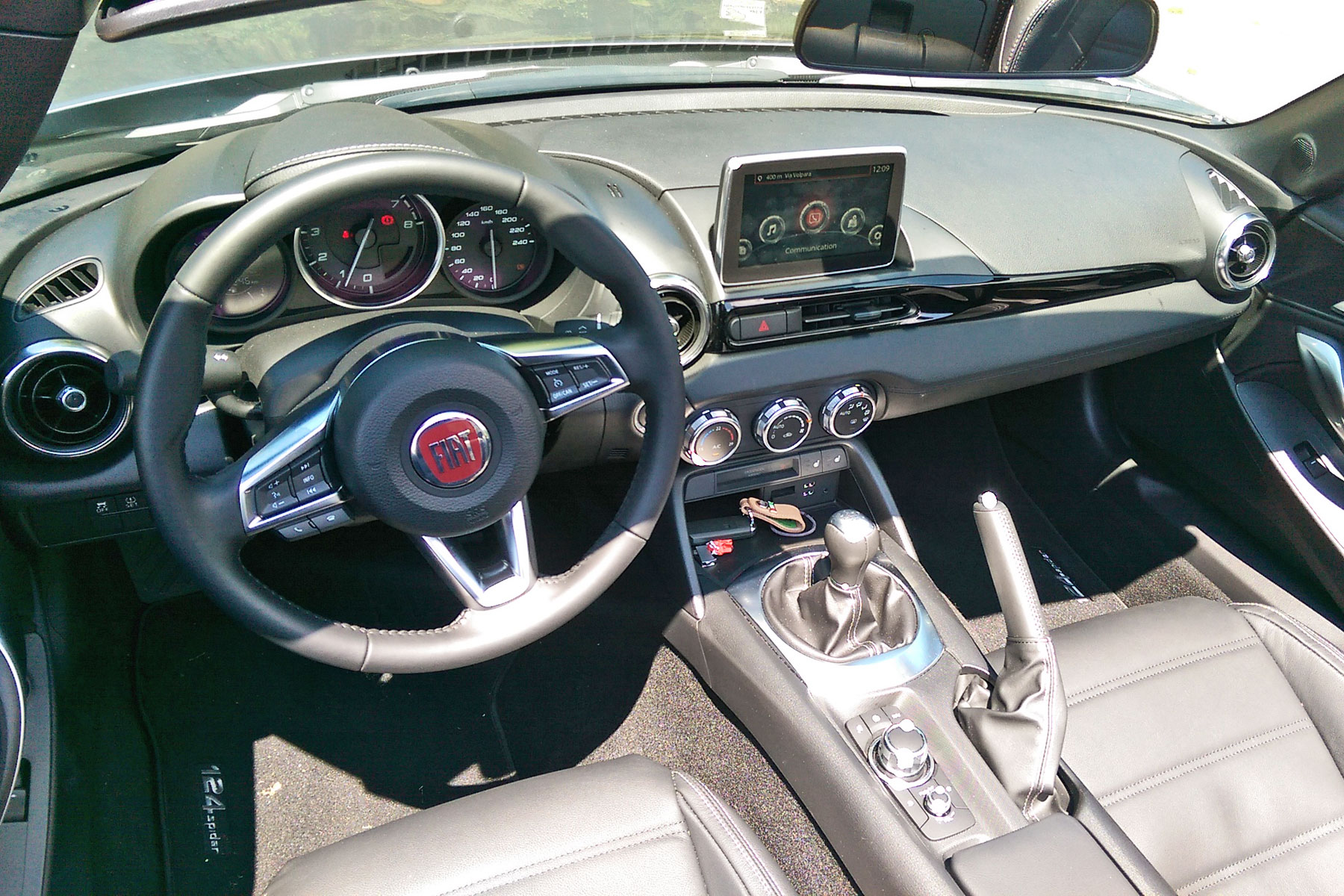 Fiat hasn’t done a lot to the 124’s cabin to differentiate it from its Japanese relation. The dashboard is the same, the infotainment screen is the same… only the steering wheel and some of the materials are different.

They didn’t want to be pushed into saying it, but the team behind the 124 were suggesting on its launch that they felt the 124 was ever-so-slightly more upmarket in terms of finish compared to the MX-5. The difference is negligible, but there is something about the Fiat 124 that feels more like a boulevard cruiser than the very focused MX-5.

Materials inside, it’s no more suited to a long journey than the Mazda. Despite being 139mm longer, the 124’s cabin feels just as cramped. This isn’t helped by a large bulge in the floor of the left-hand-drive model tested here. This is to do with the gearbox, says Fiat, and unavoidable.

It hasn’t got any more storage space than the Mazda, either. The Fiat 124 very definitely isn’t a Lotus Elise – buyers will expect a glove box and various storage spaces for, at the very least, a day at the beach. They’re going to be disappointed – although, at 140-litres, the 124’s boot space is marginally up on the Mazda’s.

…But it drives differently to the MX-5 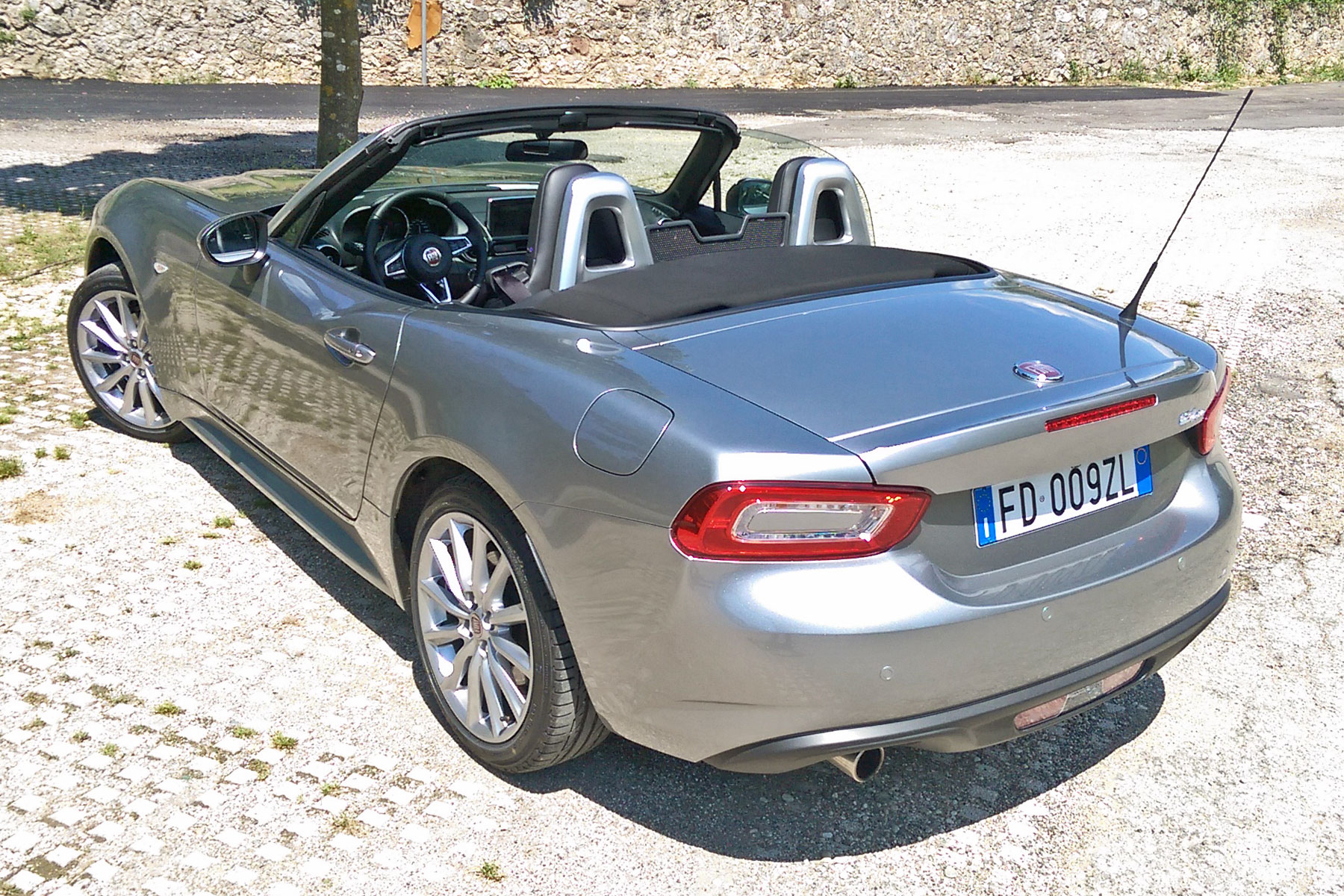 Unlike MX-5 buyers, who get a choice of a 1.5 or 2.0-litre engine, Fiat 124 buyers only get a 1.4-litre turbo engine (those wanting a little more performance can opt for the Abarth version, revealed at the Geneva Motor Show and on its way to the UK soon).

On paper, the 1.4 engine slots neatly between Mazda’s two powertrains. It produces 140hp, compared to the 1.5-litre MX-5’s 131hp and 2.0-litre’s 160hp. It’s a typical turbocharged unit – with 177 lb ft of torque at 2,250rpm. That’s much lower than the Mazda’s naturally-aspirated unit, meaning you don’t have to work it as hard, but it is quite a narrow band. It’s easy to bog the engine down at low revs – you have to be willing to use the gearbox often to keep the turbo spooled up.

It doesn’t sound particularly good, either – those who want to be heard will need to invest in an aftermarket exhaust system. We’re not saying sports cars such as the 124 need to be loud, but a bit more of a rasp would make the 124 feel more special.

Congested roads on the Fiat 124’s launch event in Italy meant we’d like a little longer with the car before coming to a full conclusion about how well it handles. Fiat’s done its own thing to the suspension, using its own springs and dampers, as well as the steering ratios.

The result? It’s not quite as focussed as the MX-5, but it does provide fun while, we suspect, not becoming quite as wearing on longer journeys. The steering is lighter than we’d like, and doesn’t transmit quite the same amount of information through to the driver as the Mazda. But as we recently criticised the MX-5 for being overly communicative (bordering edgy), this isn’t necessarily a bad thing.

The gearbox, although originally the same ‘box as that used in the MX-5, has been heavily adapted to take the extra torque, and it doesn’t seem quite as slick to use. The throw feels longer, from our brief drive, and we didn’t find ourselves changing up and down quite as eagerly as we did with the MX-5 Sport Recaro we recently had on test. 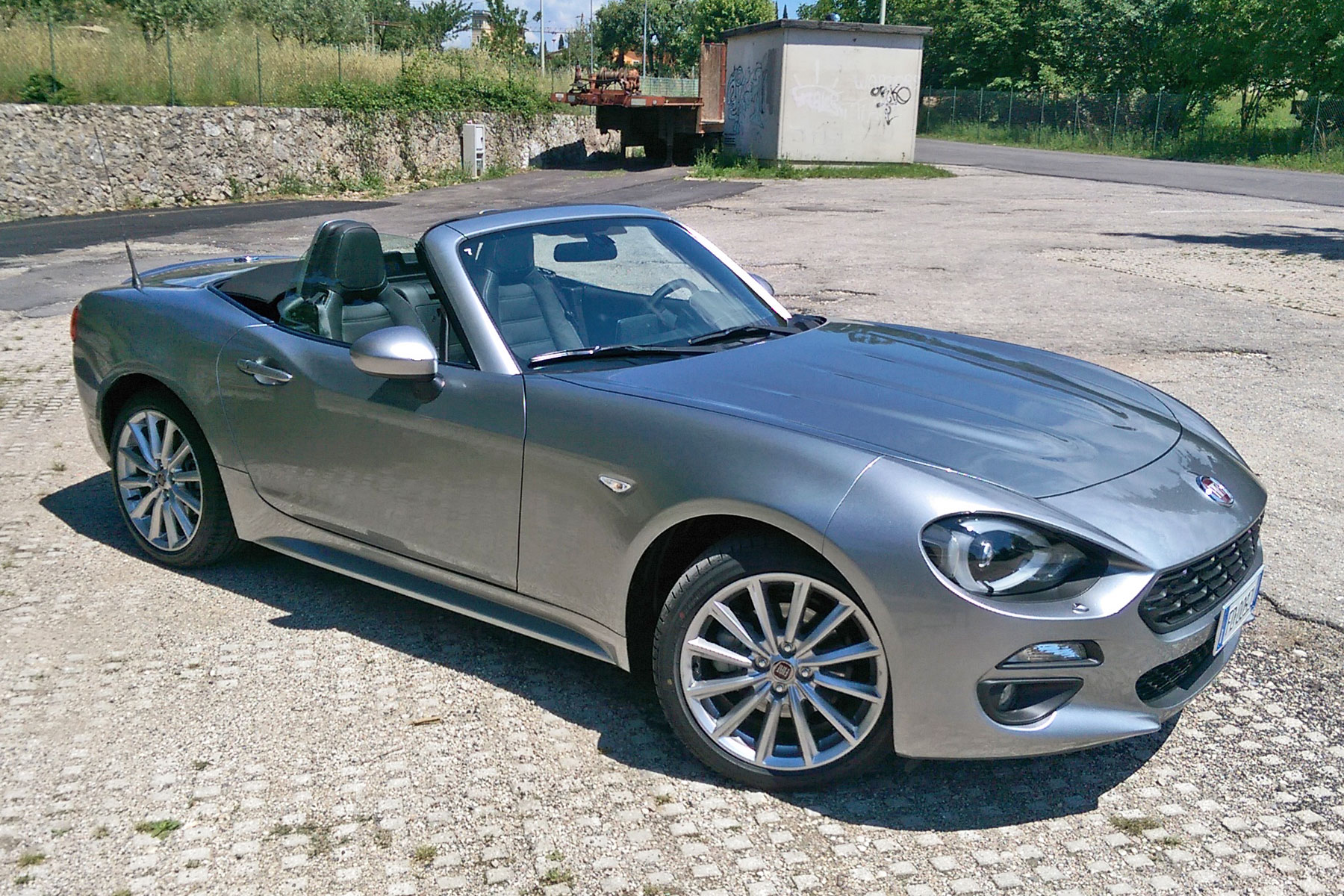 It’s difficult not to treat this as a twin test with the Mazda MX-5. The truth is, neither the Mazda MX-5 or Fiat 124 is the better car. They’re both obviously very similar, with negligible differences.

But the differences are there, if you look closely. OK, the engine is the most noticeable. It’s clear from the launch that this could be divisive – some journalists, as you may well read in other reviews, prefer the punchy turbocharged Fiat unit to Mazda’s offerings. But we love ragging the naturally-aspirated Mazda units – and they sound better than the Fiat four-cylinder.

The Fiat 124 is less sharp than the Mazda, but that results in a less frantic drive. Will 99.9% of buyers miss the Mazda’s limited-slip diff? We suspect not – and those who do can opt for the Abarth instead.

That could partly explain why the Fiat isn’t as hardcore as the Mazda. By increasing refinement in the regular model, it leaves room for the Abarth – which will have more power, an LSD and a sports driving mode.

As we’ve previously questioned whether most MX-5 customers will find the Mazda a little bit over-the-top for their needs, we wonder whether Fiat’s strategy of offering a softer, more refined model, then a more hardcore model above it, might be the way forward.