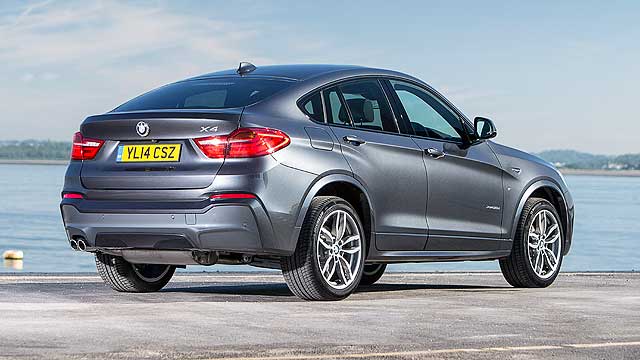 Nearly 1 in 5 British BMW sale is an X-badged SUV, the firm has revealed, as it prepares to launch its fifth X model, the X4.

While the X4 won’t significantly drive UK X sales much further – even in its best year, BMW will only sell 2000, due to limited supplies – a mid-life facelift for its more practical and strong-selling sister car, the X3, could theoretically see that 20% barrier broken. The refreshed X3 gets BMW’s new-generation 2.0-litre diesel engine, a front end restyle and £1700 extra equipment that more than offsets a £1000 price increase.

However, there is one significant limiting factor…

BMW X in the UK: we demand more than we get

Newman said the X3 will outsell the X4 three to one, just as the X5 outsells the X6 three times over. None of them is BMW’s best-selling X car of all though; the junior X1 takes that honour, accounting for… um, one in three UK BMW X sale. The X3 and X5 take around a quarter each, leaving the two flash X coupes to take the rest.

Newman would never admit to frustration at supply, though, but one stat was telling: there’s more than a six-month waiting list for the X3. This is helping keep retained values high – the X3 retains as much as 50% after three years – but such impressive RVs is also helping feed further demand because of the favourable PCP rates they help generate. A positive virtuous circle… unless you’re on the waiting list for an X3.

The BMW X3 still managed to outsell the Audi Q5 in 2015, but the firm almost certainly wishes it could further extend its sales lead to reduce such extended lead times and help the X models capitalise on market demand. The admission that it will not be able to sell more than 2000 X4 in a peak year because it can’t get stocks suggests the limiting factor in more Brits buying X cars is not demand, but supply.

Brits like their X and, it seems, would gladly have more of it; BMW’s challenge is in ensuring patient anticipation doesn’t turn into frustrated exits to one of the growing group of premium SUV rivals. The diplomatic skills of dealers will be crucial.