W Series 2019 season finale: ALL the details and how to watch in the UK 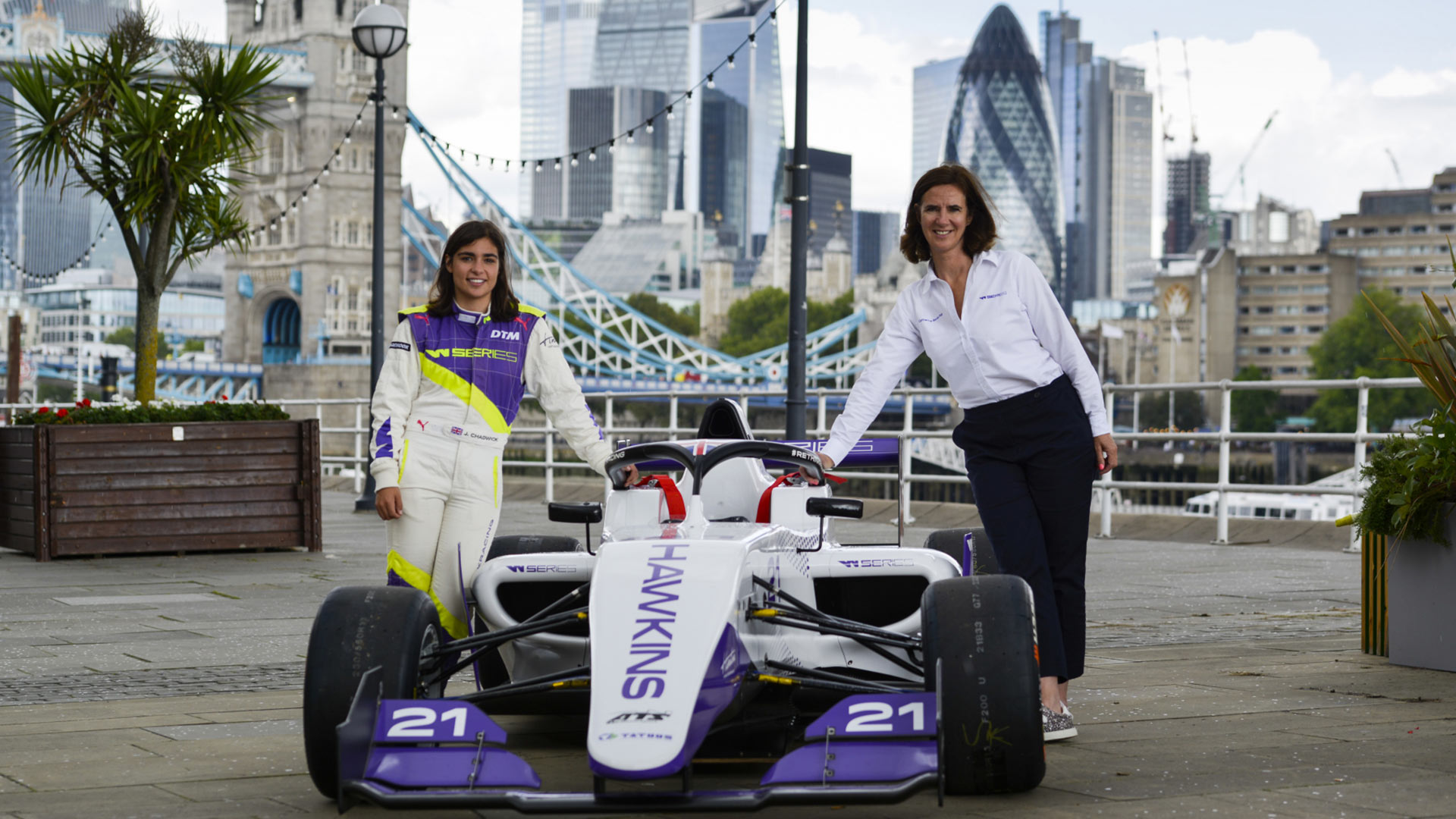 The season finale for the all-female W Series single-seater championship takes place this weekend, and is happening here in the UK.

Brands Hatch will host the battle which will see the inaugural W Series champion decided, with a British driver the favourite.

There’s one more race to go.

One more nail-biting, heart-pounding race to go.
One more chance to fight for that all-important place in the championship.

But what came before this epic finale? This is the story of the #WSeries season so far… https://t.co/hlxoYTE2MN

We have a full guide to everything you need to know about the W Series, what you can expect this weekend, and how to watch it all.

So just what is W Series? 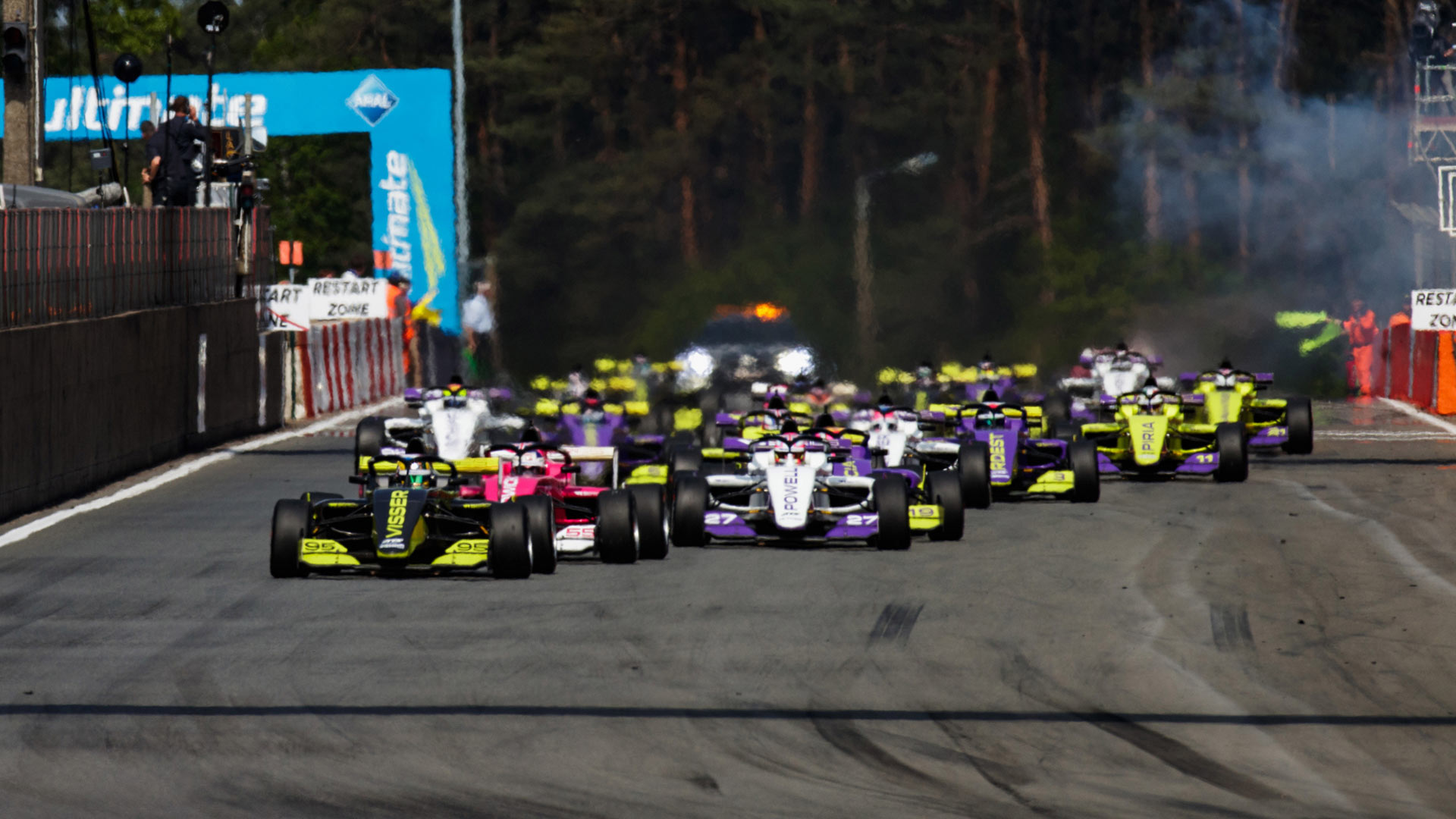 W Series is the first all-female single-seater motorsport competition in the world. It has been created to promote the best women drivers in motorsport, with the ultimate aim of delivering the first female Formula 1 World Champion.

A substantial $1.5 million prize fund is on offer, whilst the championship itself is free to enter.

Does motorsport really need an all-female championship in 2019? 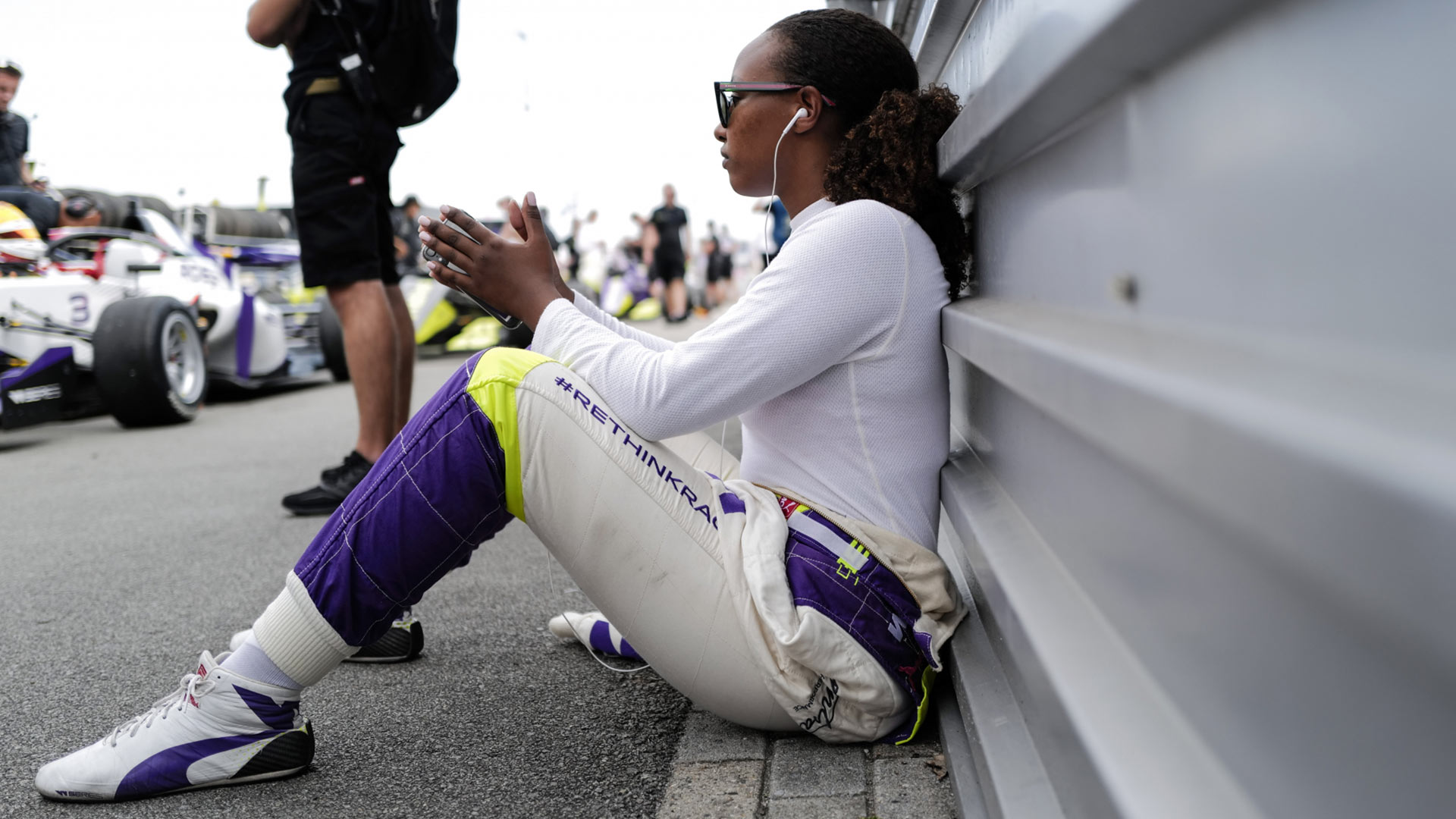 The organisers of the W Series believe an all-female competition is needed to help fast-track the best women drivers to Formula 1, and that a gender-specific championship is the most effective way to do so.

Whatever your opinion, what cannot be denied is that female drivers are underrepresented in top-level motorsport. For example, only five women have entered Formula 1 races, since the championship began in 1950. The last female to actually start a Grand Prix was Lella Lombardi – in 1976!

Although other series such as IndyCar and NASCAR have seen more recent, and regular, female entrants there is still a rather clear gender imbalance in motorsport.

The hope is also that a high-profile competition like the W Series will encourage girls to consider careers in engineering and science subjects linked to racing.

How were the 2019 W Series drivers chosen? 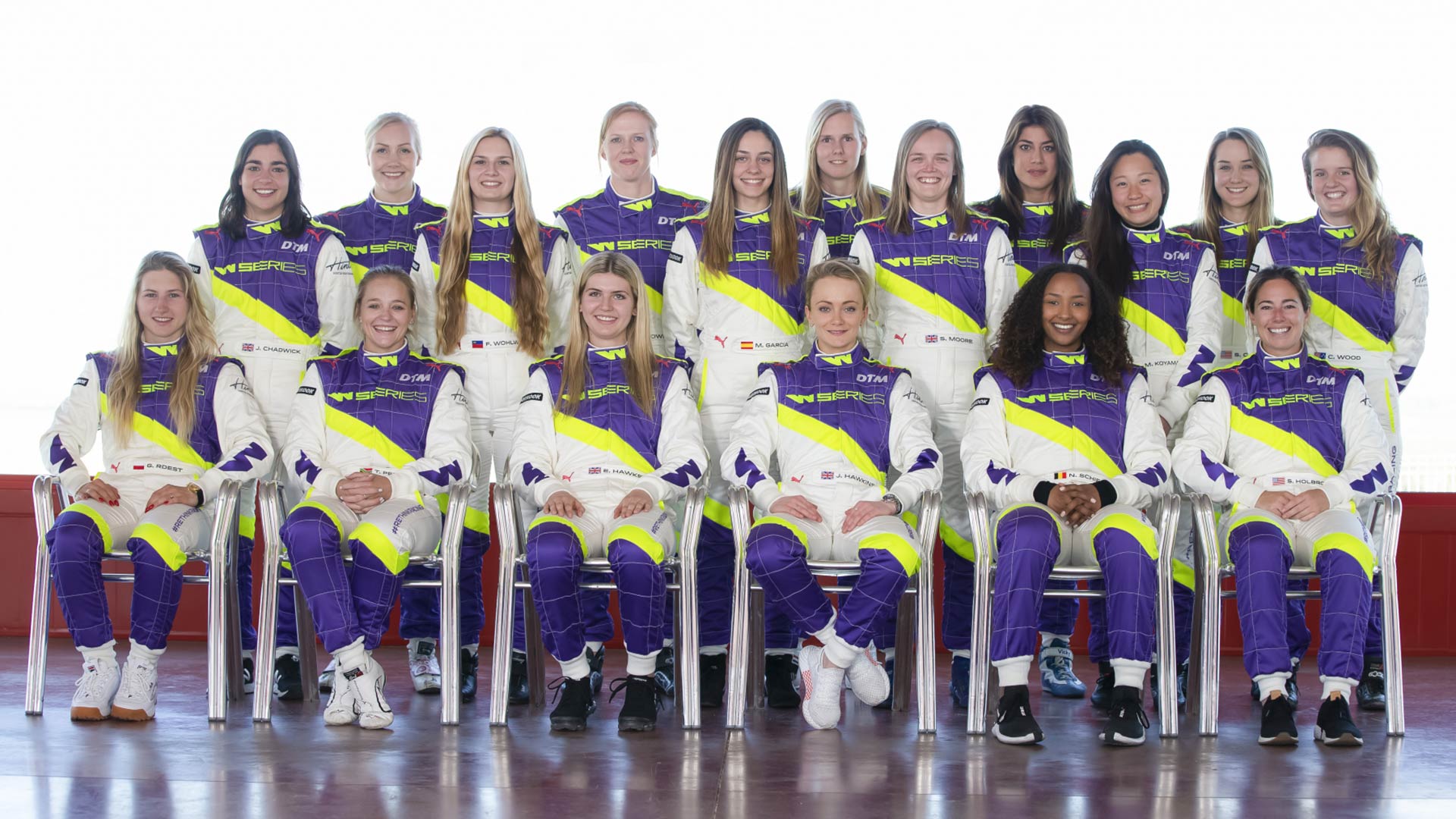 More than 100 drivers applied to enter the 2019 W Series, with these whittled down to 18 by a comprehensive selection process. Unlike other forms of motorsport, personal financial backing has been taken out of the equation.

54 contenders were invited to an extensive series of on- and-off-track challenges to gain a place. This included tests of driving skills, fitness appraisals, and even psychometric evaluations.

The overall series winner will collect $500,000, with all other competitors taking home smaller cash prizes to help further their careers.

What format does the W Series finale take? 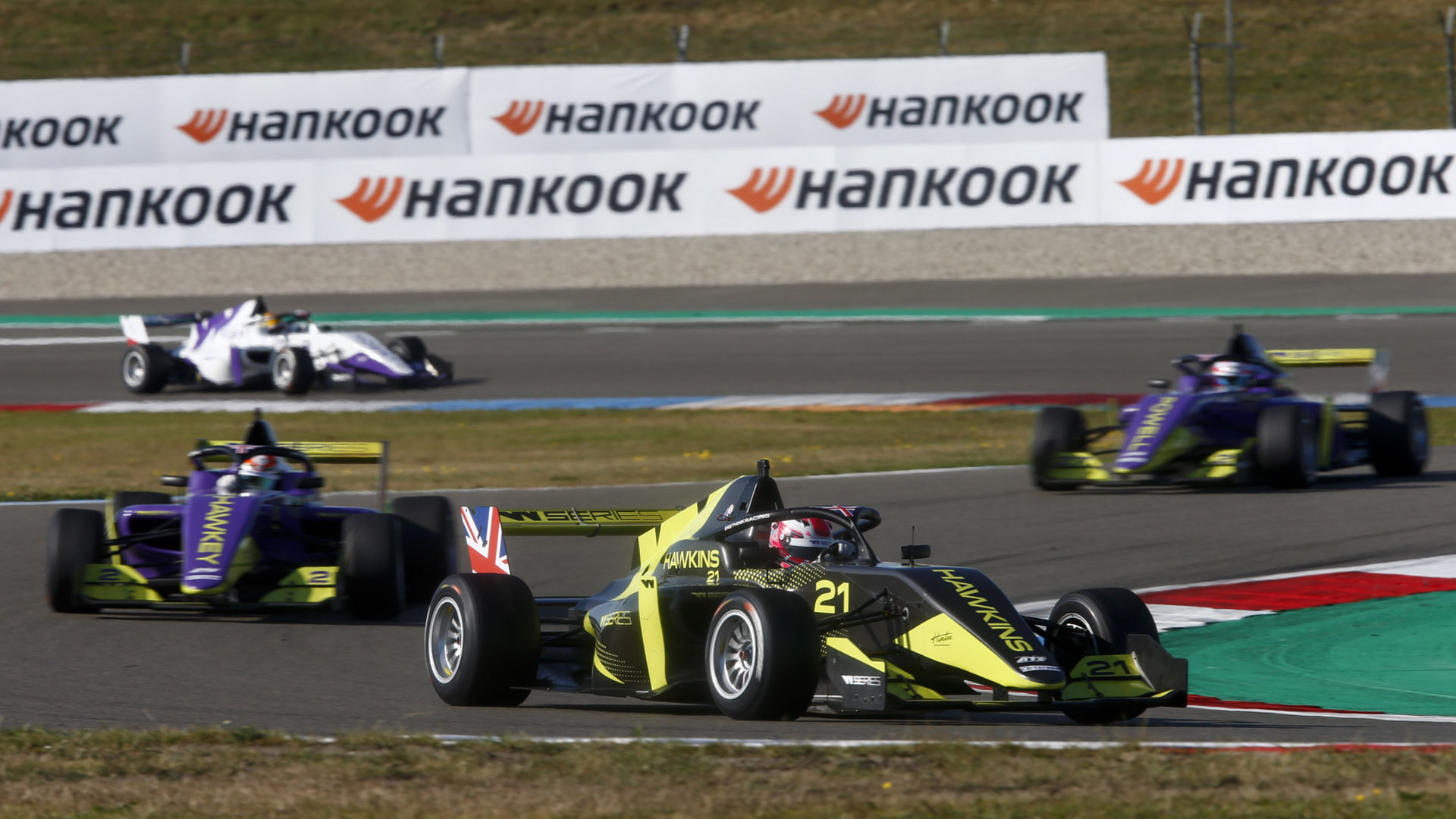 Drivers undertake two practice sessions, followed by a qualifying session. Free practice this weekend takes place on Saturday, with sessions at 10:00 and 16:15 BST.

Qualifying happens on Sunday morning at 10:30 BST, followed by the race itself at 15:10 BST.

Like in Formula 1, the top ten finishers each score championship points, with the winner collecting 25 points.

What cars do they use in W Series? 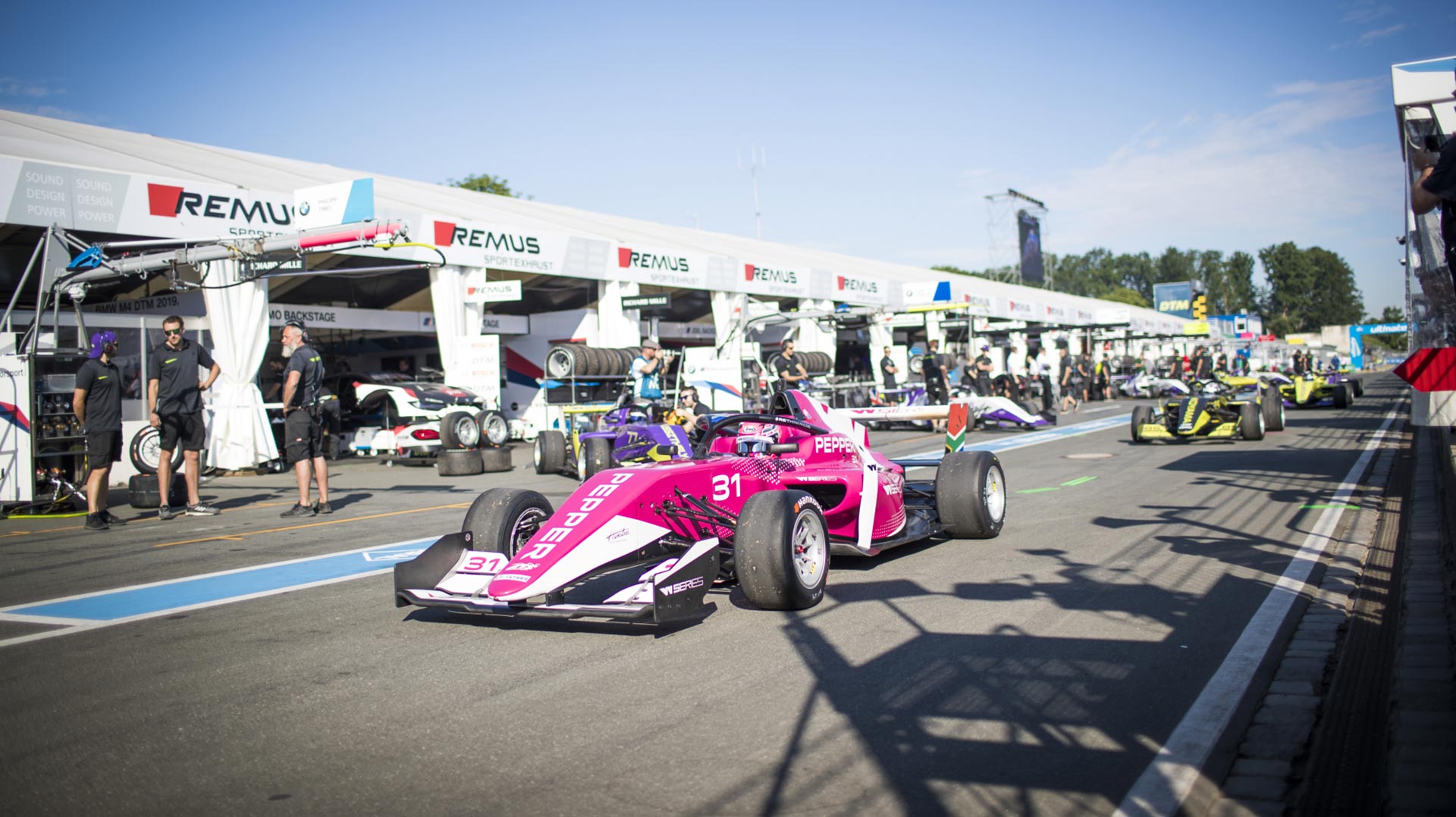 Slick tyres are used, with cars also featuring adjustable aerodynamic wings and spoilers. Just like in Formula 1, a HALO safety device is fitted over the open cockpit.

Drivers change cars and mechanics for each race weekend, hoping to avoid one driver getting an unfair advantage.

Who are the British drivers in the 2019 W Series? 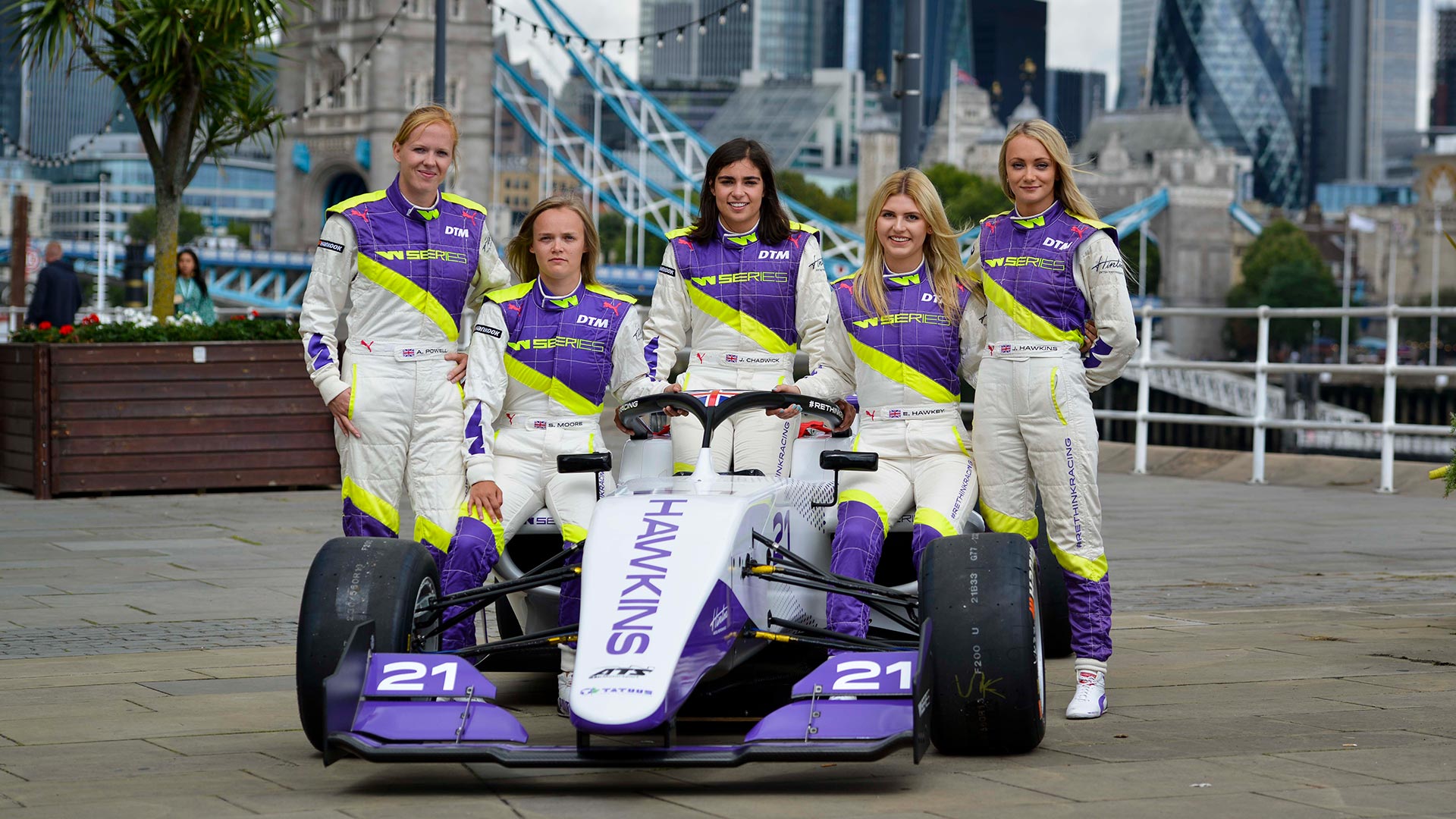 Although 13 nationalities are represented in the 2019 W Series, British drivers account for five of the coveted 18 seats.

Esmee Hawkey has raced Porsches in the UK GT Cup, and also competes in the Porsche Carrera Cup Great Britain.

Undertaking stunt driving duties for the Fast and Furious Live stadium show is just one career highlight for Jessica Hawkins, along with racing in the Mini Challenge UK.

Yorkshire-based Sarah Moore has already competed in 132 races, and won the 2009 Ginetta Junior Championship – becoming the first woman to do so.

Who could win the W Series championship this weekend? 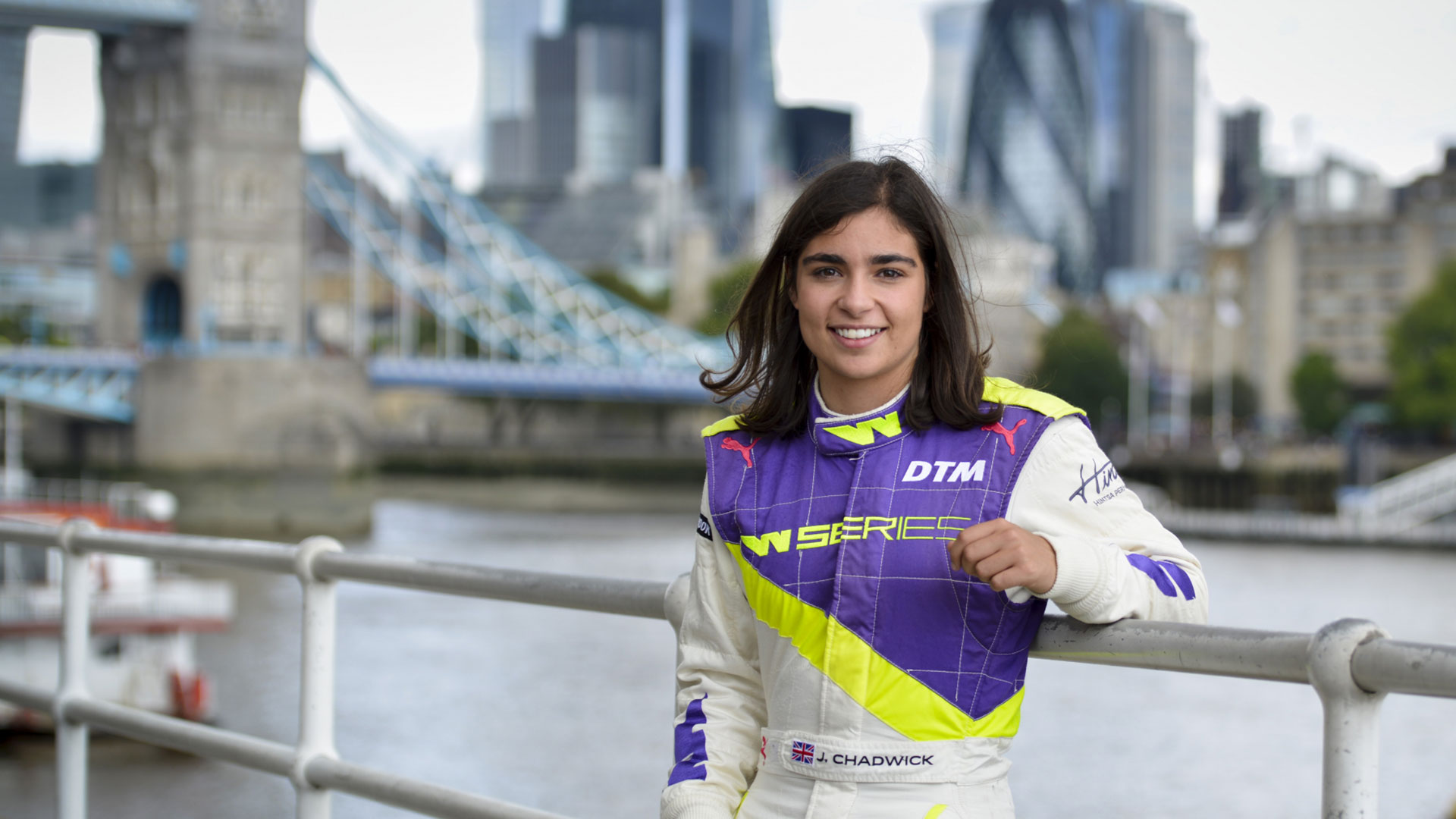 The title fight comes down to just two contenders. Britain’s Jamie Chadwick currently leads the championship with 98 points, having won two of the five point-scoring races.

Dutch driver Beitske Visser holds second place in the title hunt, and is 13 points behind Chadwick.

Providing Chadwick finishes above Visser, the Brit driver will be champion. However, numerous other permutations come into play if the Dutch driver takes the lead, meaning it should be a nail-biting finale!

How can I watch the W Series at Brands Hatch this weekend? 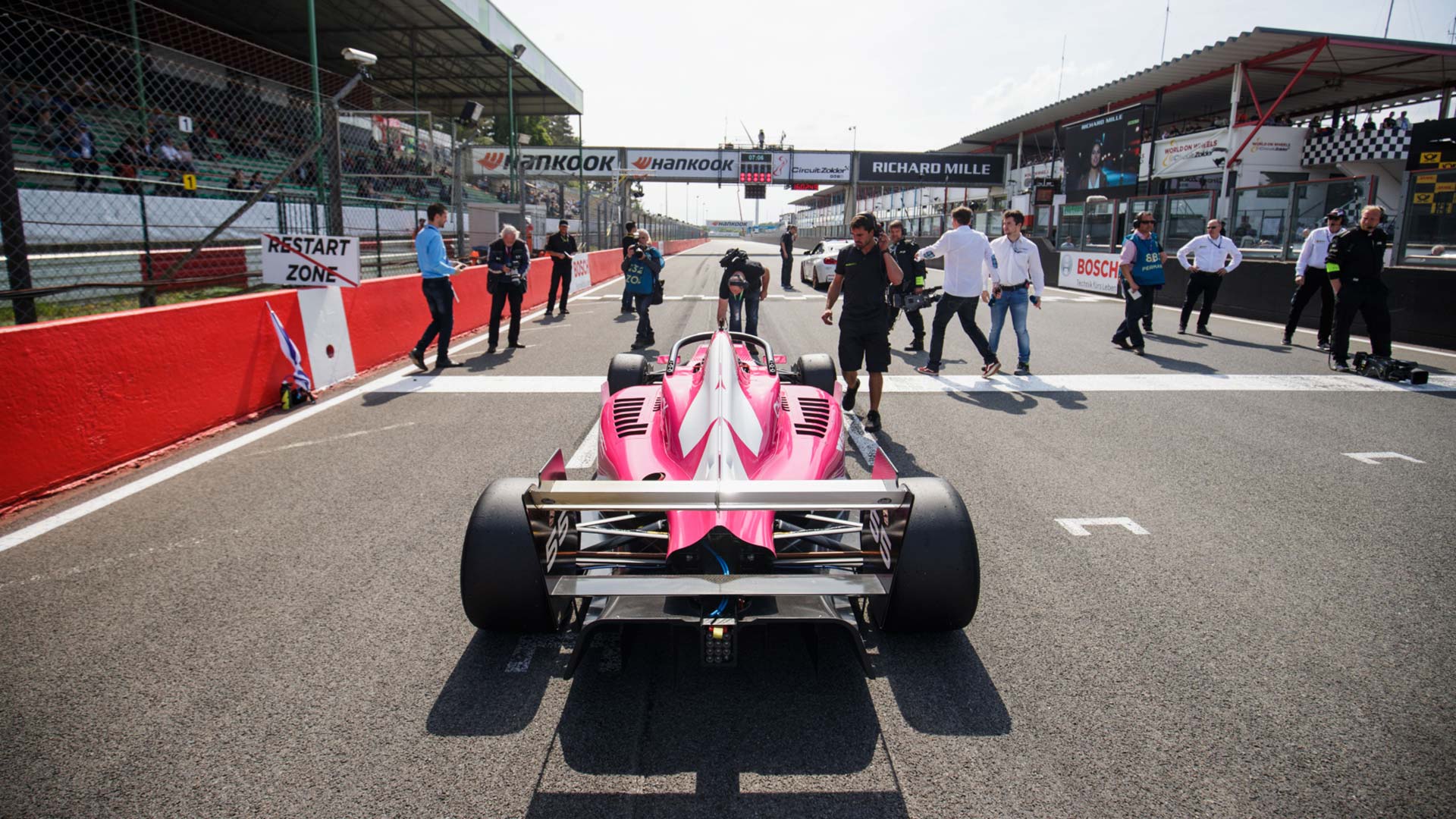 Brands Hatch is still selling admission tickets for this weekend, which also includes the chance to watch the DTM touring car races.

For those just wanting to watch the race on Sunday, adult entry costs £30, with teenagers paying £18.

How can I watch the W Series on TV this weekend? 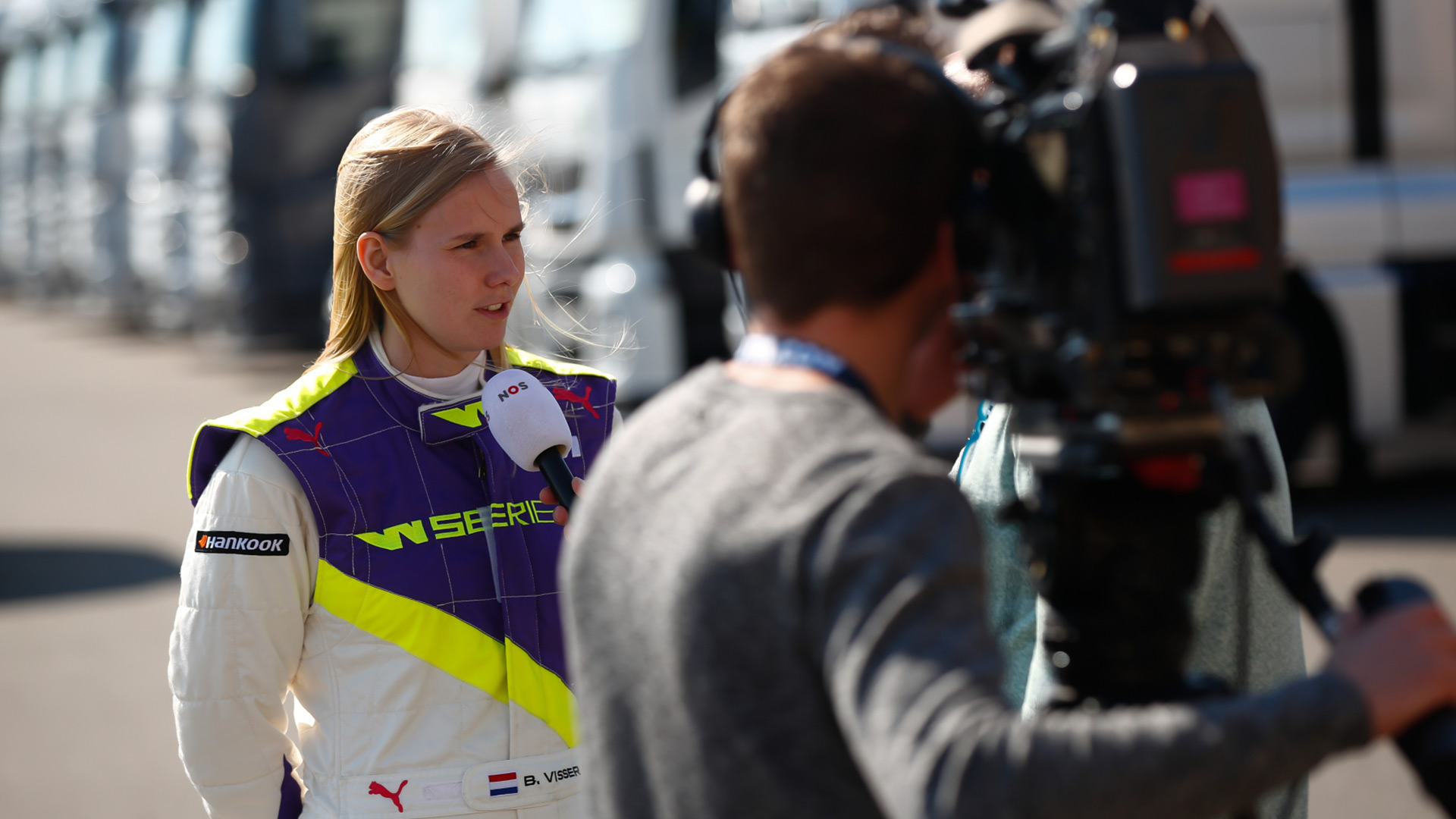 Securing free-to-air TV coverage has been key to the W Series, and UK fans can watch Sunday’s race LIVE on Channel 4. Coverage starts at 14:45 BST, with all the buildup the race at 15:10 BST.

Lee McKenzie acts as lead anchor for Channel 4, with Ted Kravitz undertaking his familiar pit lane reporting.  Commentary is provided by Claire Cottingham, whilst David Coulthard and Allan McNish have acted as co-commentators.

Numerous other TV broadcasters cover the W Series, whilst live streaming is also offered for areas without broadcast deals. 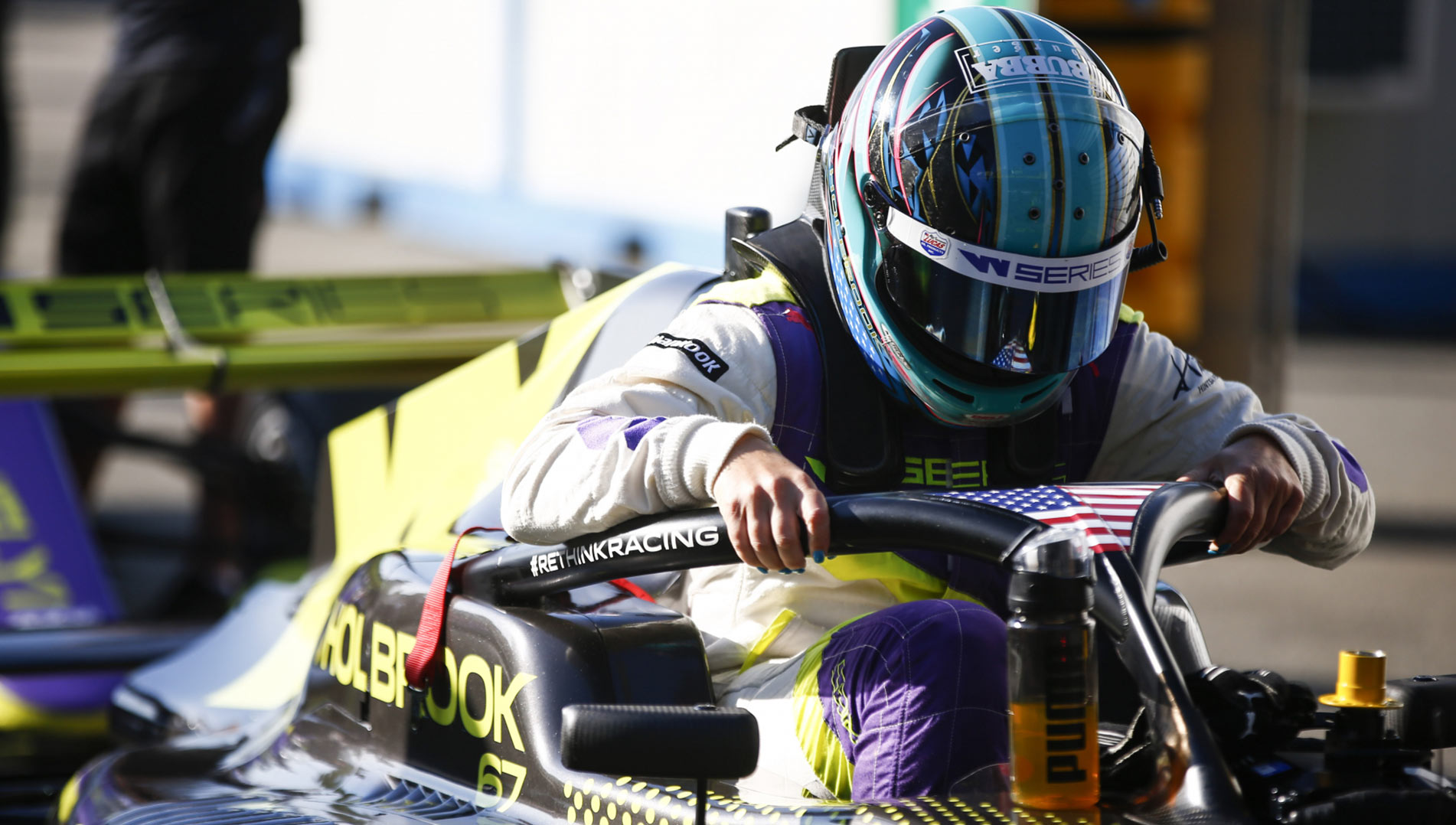 Yes indeed. The championship organisers have already confirmed a second season will take place in 2020. All drivers who finish in the top 12 for the 2019 season will be invited back, whilst those below 12th place can enter the selection programme again.

Most significant is that 2020 W Series competitors will be eligible to score FIA Super Licence points. Obtaining a Super Licence is part of the requirements for drivers to race in Formula One.

HondaJet in public flight debut – and it’s coming to Britain

From the Alfa Romeo 4C to the Volkswagen e-Golf, we list some of the cars that won’t be around to see in the new year
Read more