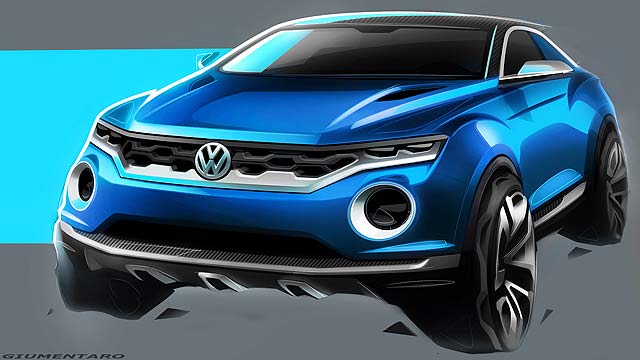 A two-door four-seat high-rise machine, it’s said to over “a glimpse at future Volkswagen SUVs” – and a possible Volkswagen entrant into the booming small crossover segment currently dominated by the Juke, Vauxhall Mokka and Skoda Yeti.

Its rival sell so many of these cars, Volkswagen really can’t afford to ignore the sector, particularly as it wants to become the world’s biggest car maker of all by 2018.

Designed under the watch of Walter da Silva and Kalus Bischoff, the T-ROC apparently has VW ‘SUV DNA’. The firm points to the 3D radiator grille, LED headlights and bold LED taillamps with pride. Apparently the round front lights “hark back to the Harmann Ghia Type 34”… agree?

Inside, it becomes the first mainstream Volkswagen to get a full set of digital dials, and there’s an additional 12-3-inch colour touchscreen tabled in the centre of the dash that reacts to finger gestures. Pinch and swipe away.

Volkswagen has installed the Golf GTD engine to the T-ROC: 184hp which, when linked to the seven-speed DSG and 4MOTION all-wheel drive traction, helps it do 62mph in 6.9 seconds. Decidedly hot hatch-like.

Volkswagen is banking on 57.6mpg combined economy and CO2 emissions of 129g/km.

The roof is novel: the middle section is made from carbon composite and can be removed in two halves, for a sort of SUV Targa car. They remove manually though, and although there’s a space in the boot for them, we imagine potential compact SUV owners would much prefer electric operation and autonomy…

What’s the story of the name? Well, the ‘T’ bit links it to Volkswagen’s other SUVs, such as Tiguan and Taigun. ROC… well, that’s because “the all-wheel-drive car is at home on ‘rocky’ trails as on tarmac”. Groan.

At this stage, T-ROC is purely a concept; Volkswagen admits it needs to get the Taigun out first, a model currently in the development phase. That works in T-ROC’s favour though: if that car can do the practical stuff, this model can be made more coupe-like and stylish.

We’ll see the real concept at the 2014 Geneva show next week… for now, tell us: do you like what you see so far?