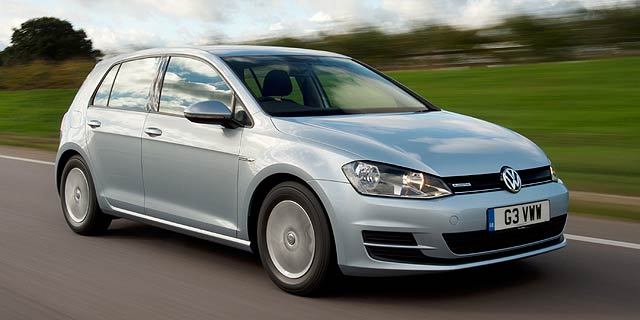 Volkswagen has, to date, ignored the hybrid trend favoured by world-giant arch-rival Toyota. As a European company, it believes TDI diesels currently return better real-world fuel economy than petrol-electric hybrids. And aims to prove this with the latest ultra-eco model in the new VW Golf range, the Bluemotion

With one eye on the Toyota Prius and Auris Hybrid, the firm has trimmed its CO2 down to just 85g/km. This pushes fuel economy up to an amazing 88.3mpg. The smaller VW Polo Bluemotion emits 90g/km and only just cracks 80mpg. That’s how green the new Golf Bluemotion is.

As with older Bluemotions, this has been achieved through detail enhancements, largely to the bodywork. It sits 15mm lower, there’s a roof spoiler, tiny winglets at the back, more underbody panelling and, yes, low rolling resistance tyres.

The 1.6 TDI turbodiesel goes one better over regular 1.6-litre diesel Golfs too – it produces 110hp instead of 105hp. With a faster warm up, less internal friction and an exhaust packed with oxidation catalyst, diesel particulate filter and NOx trap, there really has never been a greener or more efficient Golf. The best green Bluemotion yet? 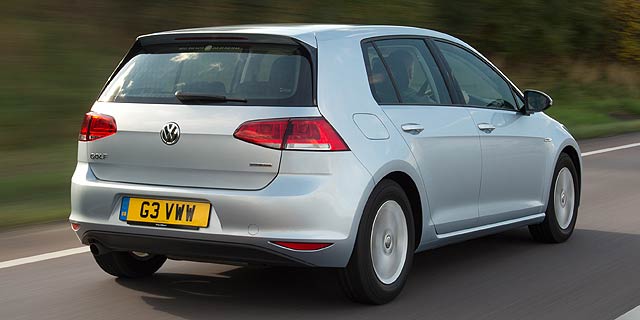 What is the 2013 VW Golf Bluemotion like to drive?

The secret to the Golf Bluemotion appeal is that it’s just like any other Golf diesel. No special tricks are needed to drive it: simply turn the key and let its 10% slipperier body, lower-friction drivetrain and longer gearing do the work.

It does feel different though: the ride is stiffer. Oddly sporty-feeling at first, in fact, due to the lowered and tightened suspension. This is noticeable around town, jiggling passengers that bit more, although it does translate into rock-solid stability at speed. This is a great long-distance car.

Super-tall gearing helps there, and the fact this Golf Bluemotion is the first one to come with a six-speed gearbox means it is more fluid and linear in normal use: you’re less aware of the turbo boost dropping out due to a big rev drop between gears. Having 184lb ft of torque spread flat between 1500-3000rpm further enhances the elasticity (and overcomes the fact it does nearly 40mph per 1000rpm in top).

It’s the sheer classiness of driving a Golf that stands out though. The controls have a smooth, well-engineered feel. The engine is crisp. The gearchange feels delectable and handling is accurate. It feels a premium product that’s a step above the mainstream and, while you can sometimes feel the compromise of VW’s decision to use cheaper twist-beam rear suspension on lower-powered Golfs, it’s intrequent enough not to be an issue. 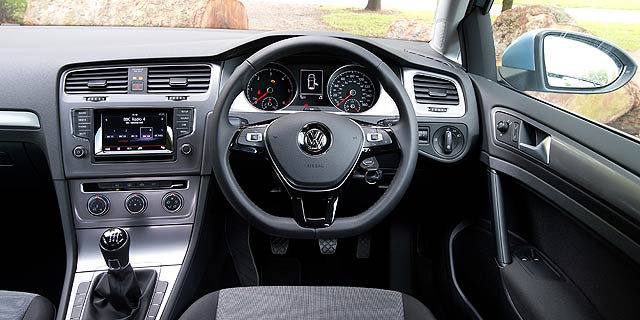 Does the VW Golf Bluemotion make you suffer for going green?

The first Golf Bluemotions were a little bit austere. You could tell where they’d been cut back – unnecessarily so in places, you thought. Why delete the felt lining for the front door bins, for example?

The reason for this was that to keep the weight low, Bluemotions were based on poverty spec Golfs. They still are – this is based on the S – but things have moved on sufficiently to make this car much less of a compromise. You can even get sat nav and other such luxuries.

This 2013 Golf Bluemotion has those other enhancements too – the six-speed gearbox, the extra bit of power, the fact VW seems to have designed it as a core part of the range from day one, rather than taking out content from an existing car to meet defined parameters. It’s the most cohesive and penalty-free Golf Bluemotion yet.

Indeed, the only fly could be the pattery ride quality. It’s not a sports car – the normal-spec, bolstering-free seats and relatively skinny 16-inch wheels prove that – so the fact it has a hot hatch ride is a bit surprising at first.

Real world economy makes it all worthwhile. We took things reasonably sensibly on a 50-mile motorway run. We got 83mpg on the trip computer. We sped up: it still showed 74mpg. This is an economy car that delivers.

The Volkswagen Golf Bluemotion works, without compromise. It is a highly fuel efficient car both on paper (with all the tax benefits) and in real-world conditions (with all the money-saving at the pumps). The ride is a bit firm and you can’t quite have all the options you can on posher Golf, but the promise of approach 88.3mpg may outweigh this.

Which just leaves the price hurdle: £1000 more than a regular Golf TDI S. £500 more than a Toyota Auris Hybrid. A staggering £2500 more than a Ford Focus Econetic 88g. It’s not cheap. But it works. And it’s a Golf – the world’s most economical Golf, ever. That’ll be enough for some.