If you’ve given up hope of ever finding a genuine ‘barn-find’, may we suggest taking a look at your nearest castle? A collection of 12 classic cars has been unearthed in a Swiss castle and will be offered for sale, without reserve, at the Bonhams Spa Classic sale in May.

We’ll bring you more details on the cars when we have the info, but for now enjoy the photos of the cars discovered in the castle. 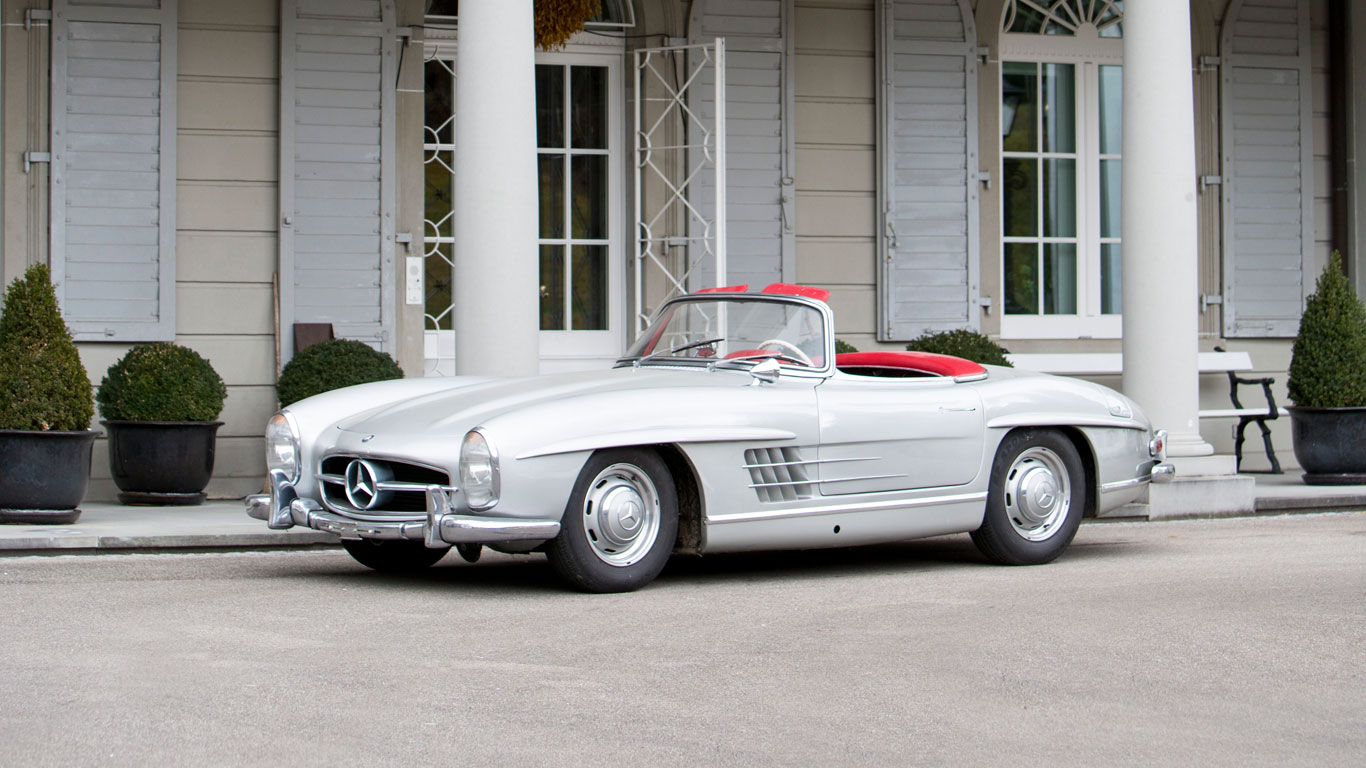 If ever a car was befitting of a Swiss castle it would be a Mercedes-Benz 300 SL Roadster. It was launched in 1957 when Mercedes-Benz decided to capitalise on the popularity of open-top two-seaters by converting the 300 SL ‘Gullwing’ to create a topless icon.

The 300 SL Roadster isn’t in concours condition, which might explain the relatively low pre-auction estimate. In 2015, an unrestored 1960 example sold for just under a million at the Mercedes-Benz sale in Stuttgart. 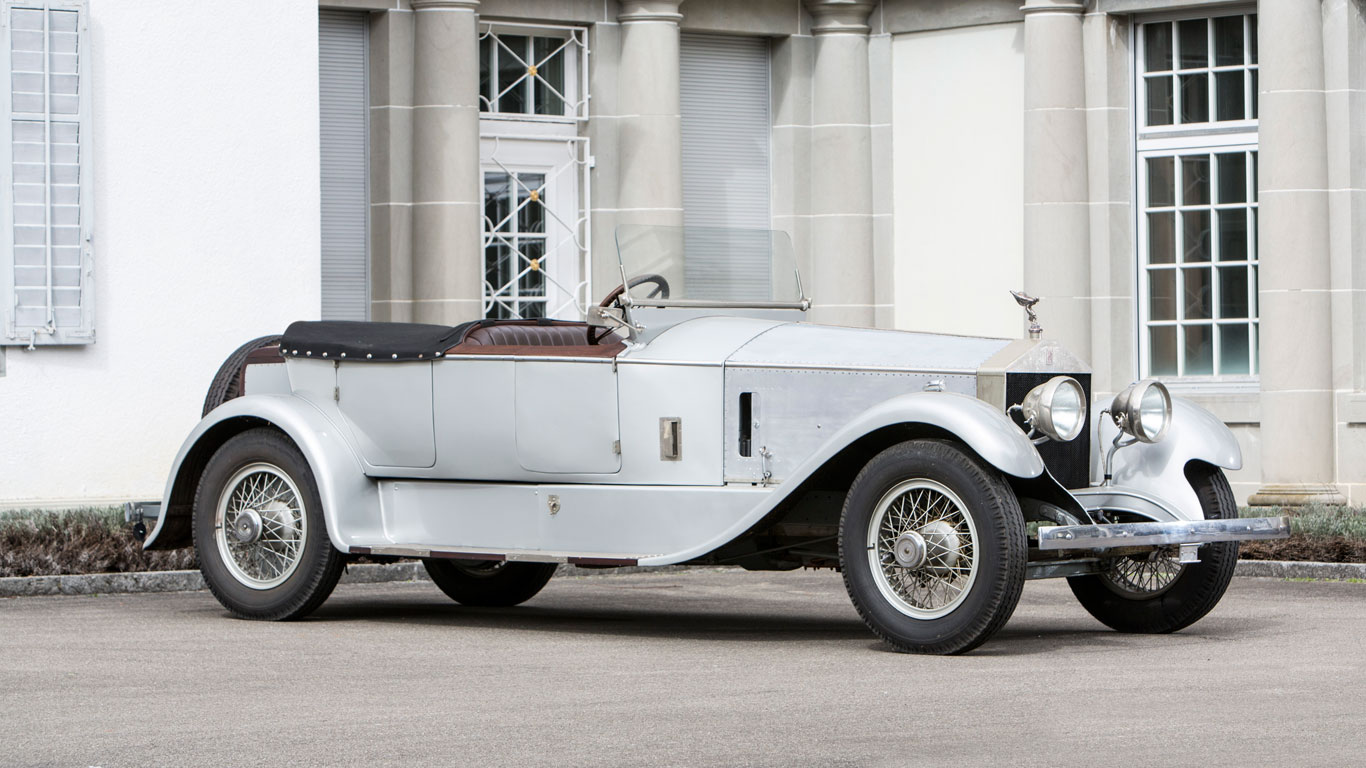 Bonhams is expecting this Rolls-Royce 40/50hp Silver Ghost to sell for upwards of £500,000 when it goes under the hammer in Belgium. “It is the last word in motoring luxury and perhaps the most influential automobile from the early days of motoring,” said Bonhams. 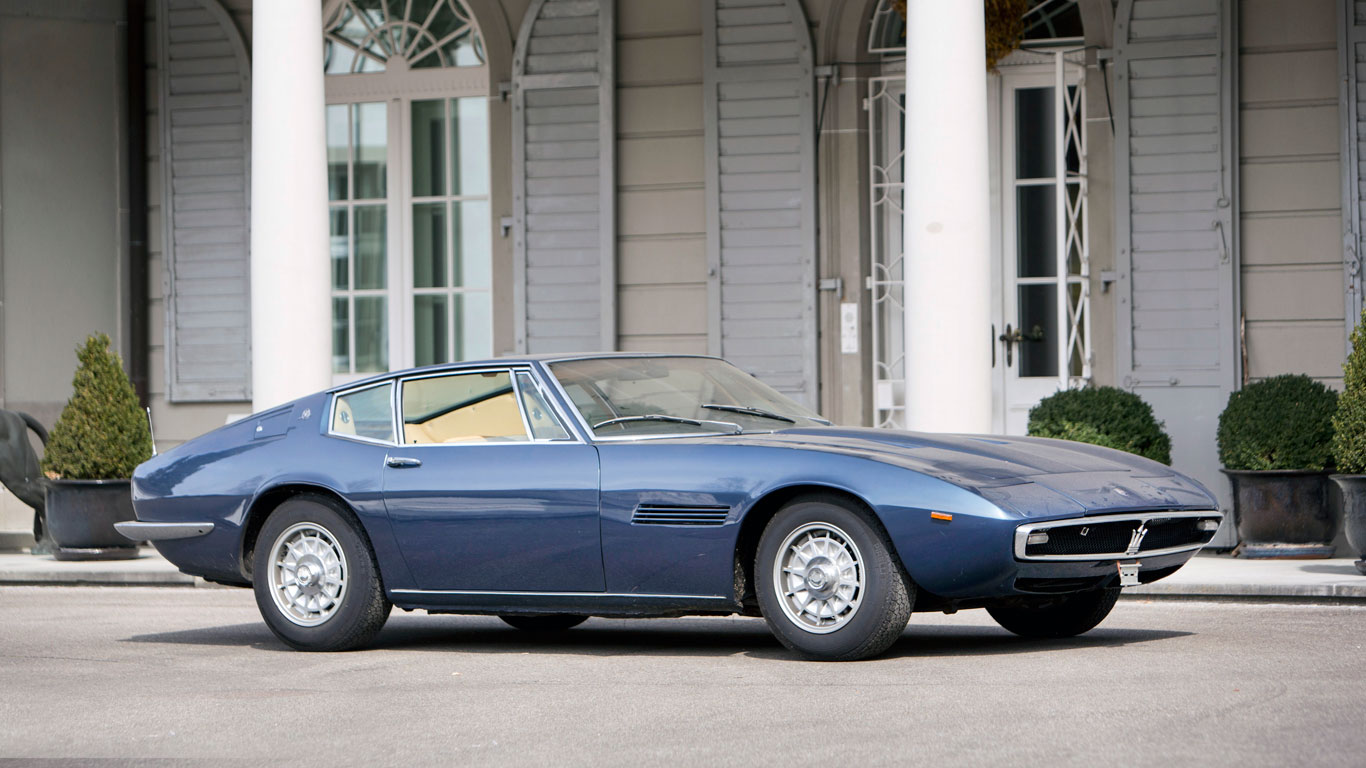 The owner of the Swiss castle must have had a thing for Maseratis, as this Ghibli SS is one of three such cars in the collection. First shown at the 1966 Turin Motor Show, the Ghibli was Maserati’s first genuine supercar and a credible rival to anything offered by Ferrari or Lamborghini at the time.

It was styled by Giorgetto Giugiaro during his time at Ghia, with the coupe version later joined by a stunning Spyder. The SS model benefited from a larger 4.9-litre V8 engine, up from 4.7-litre, giving it a top speed of 170mph. In 2016, a concours-winning Ghibli SS sold for £203,100 at the Bond Street sale.

In 1978, Aston Martin finally saw sense and created a convertible version of the AMV8. It featured the new burr walnut trim, blanked-off bonnet scoop and sculpted spoiler of the ‘Oscar India’ hardtop model, but the highlight was the power-operated, fully-lined hood. 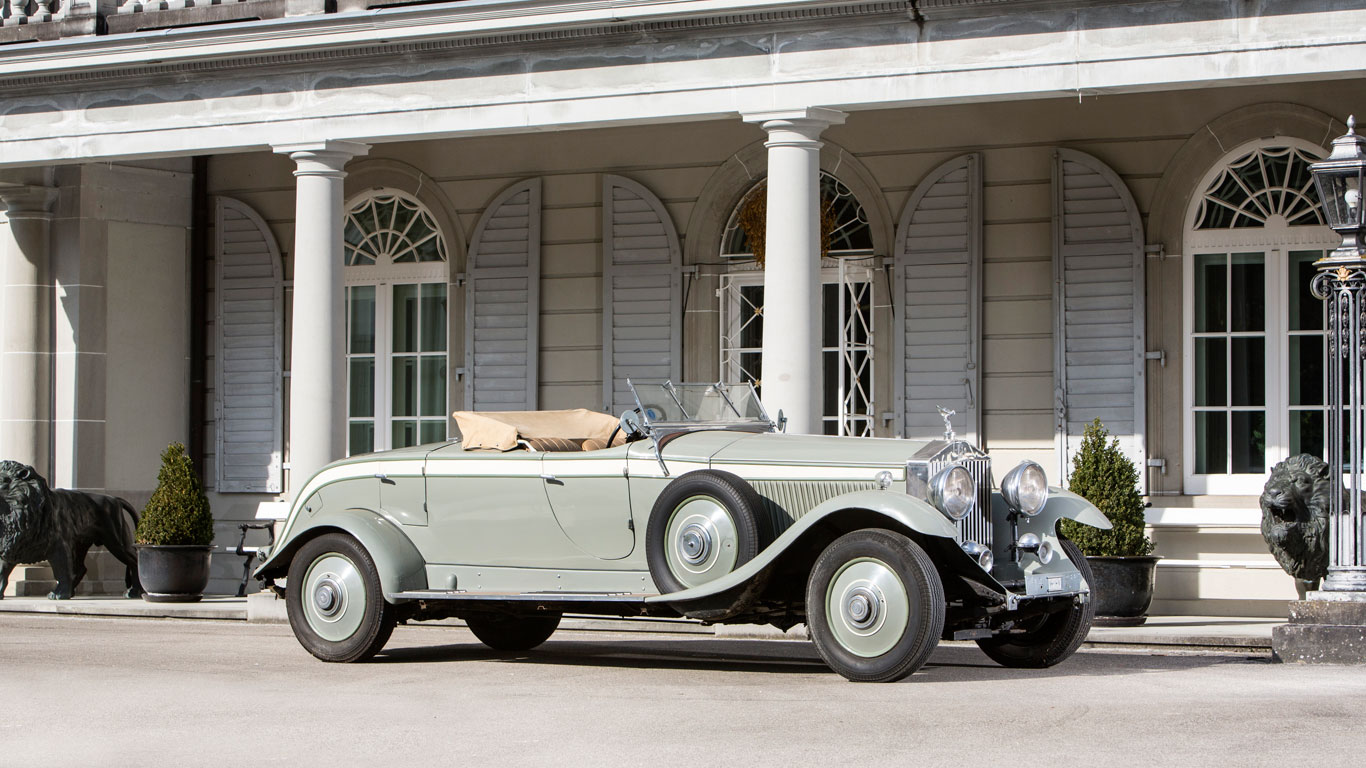 The Rolls-Royce Phantom II was the last of the marque’s 40/50hp models and was essentially a development of the earlier Phantom. Improvements included a new chassis design and added synchromesh on the higher gears.

Only the chassis and mechanicals were built by Rolls-Royce, with the owner free to select the coachbuilder for the body. In the case of this ‘castle-find’ Phantom II, the body was finished by Mulliner in West London, a company which, by the 1930s, worked almost entirely on Rolls-Royce and Bentley projects. 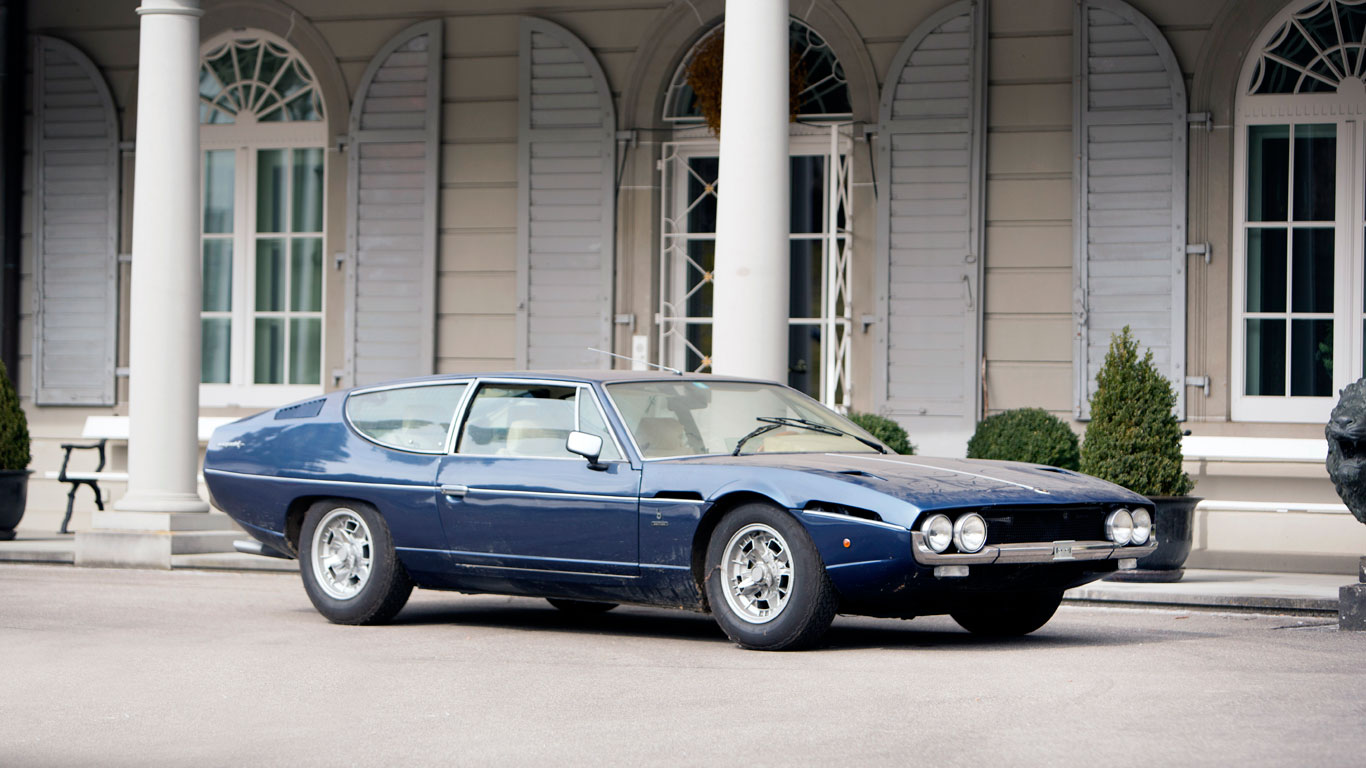 At the time, the Espada was Lamborghini’s most successful model, with 1,227 units sold during a decade of production. The brief to Marcello Gandini was simple: design a genuine four-seater supercar in order to expand the company’s product line-up. It was unveiled at the 1968 Geneva Motor Show and proved to be incredibly popular.

This is a Series II model, distinguishable from the outside by the deletion of the grille which covered the vertical glass tail panel. More significantly, the interior was overhauled, while power from its 3.9-litre V12 engine was increased to 350hp. A total of 575 units were produced, making the Series II – or 400 GTE – the most common Espada. 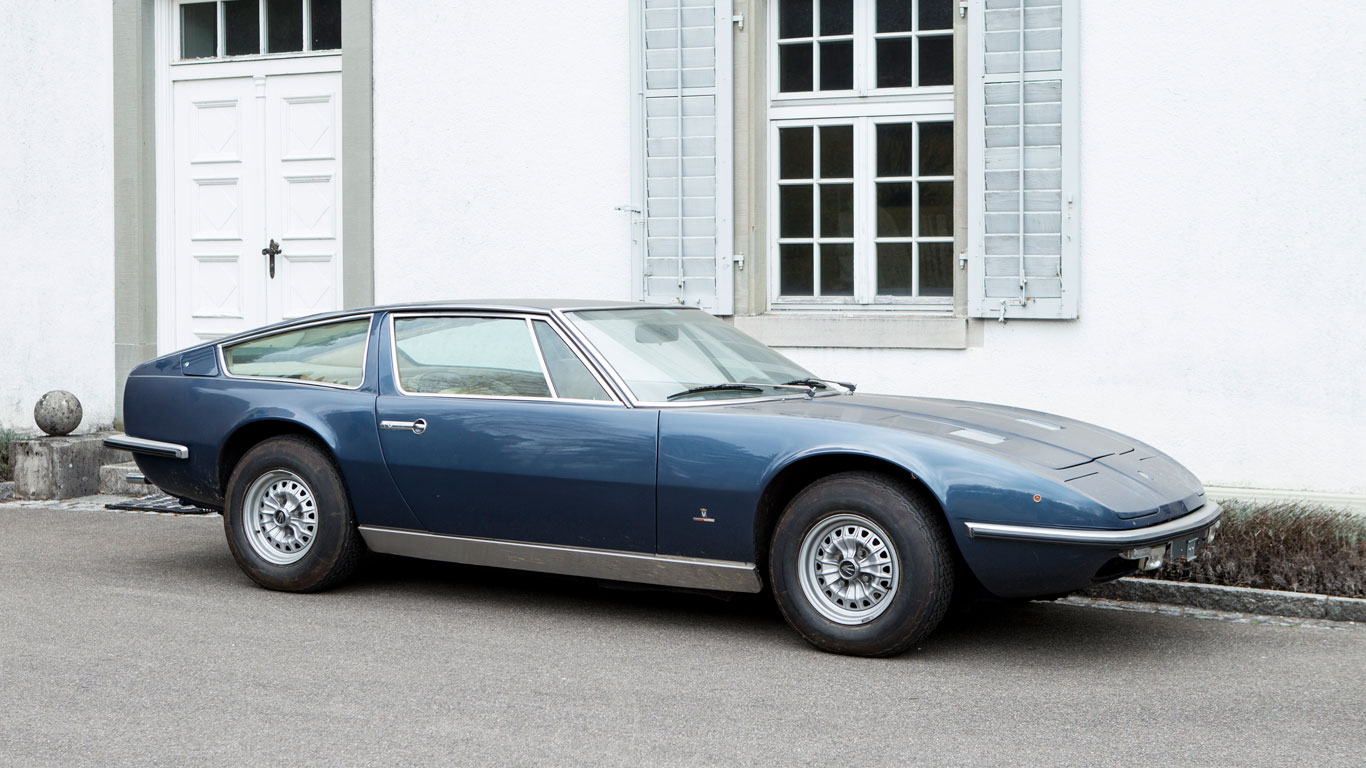 Practicality was clearly the order at the day at the Swiss Schloss, because here’s another four-seater GT from Italy. The Indy was first shown at the 1968 Turin Motor Show on the Vignale stand, but a year later it appeared under the Maserati banner in Geneva. The name was chosen to commemorate Maserati’s success at the Indianapolis 500.

As a 1971 car, this Indy is powered by the 4.7-litre engine, giving it a top speed of 160mph, which, at the time, made it one of the fastest four-seater cars in the world. In all forms, a total of 1,136 units were produced, making the Indy a successful if underappreciated GT car. 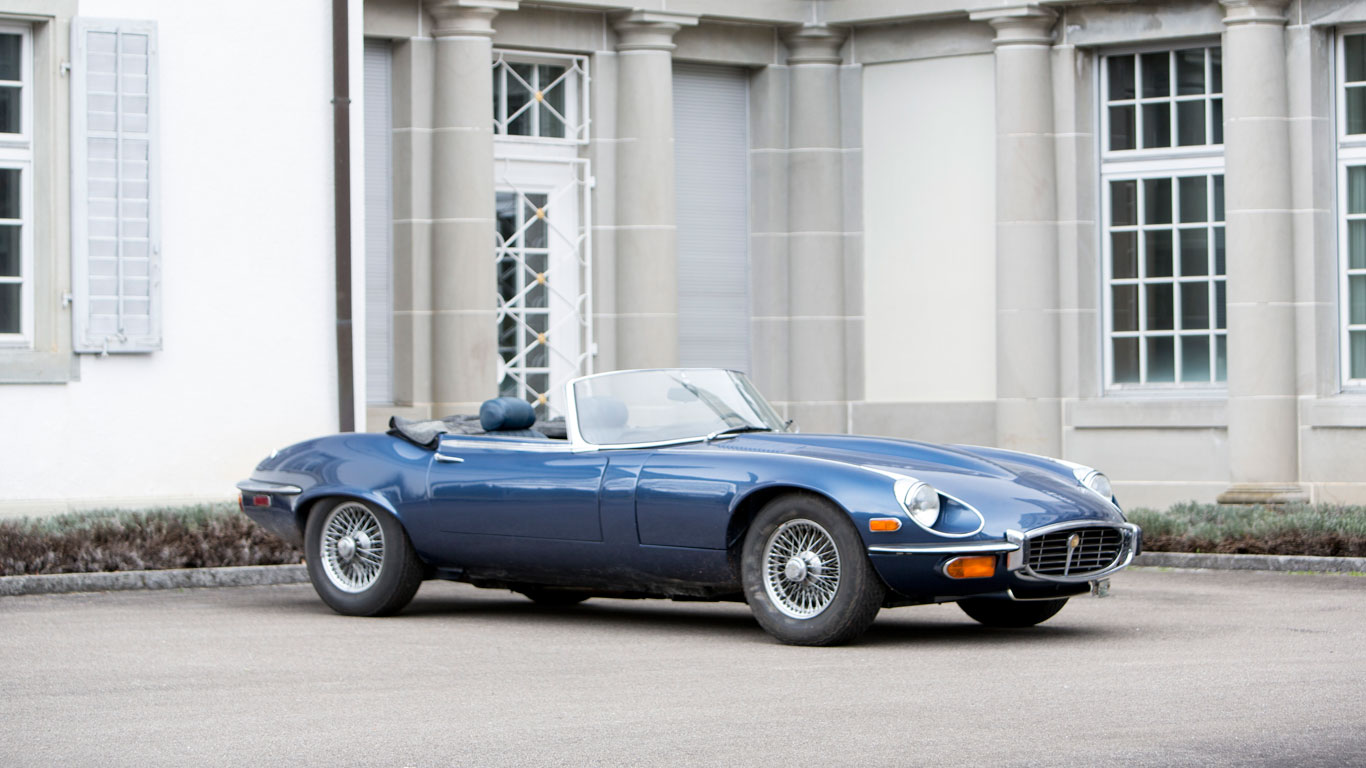 By 1971, the Jaguar E-Type was on borrowed time. A decade on from its sensational debut, Jaguar had one last throw of the dice by introducing the Series 3 model, complete with 5.3-litre V12 engine. The new chrome grille and flared arches did little for the E-Type’s styling, while the softer suspension only served to blunt its performance.

The E-Type was losing its lustre. The energy crisis meant that only the very rich or very foolish could afford to run a V12 sports car, while strikes hampered production. Today, the Series 3 is the most affordable E-Type you can buy and that V12 engine holds massive appeal. 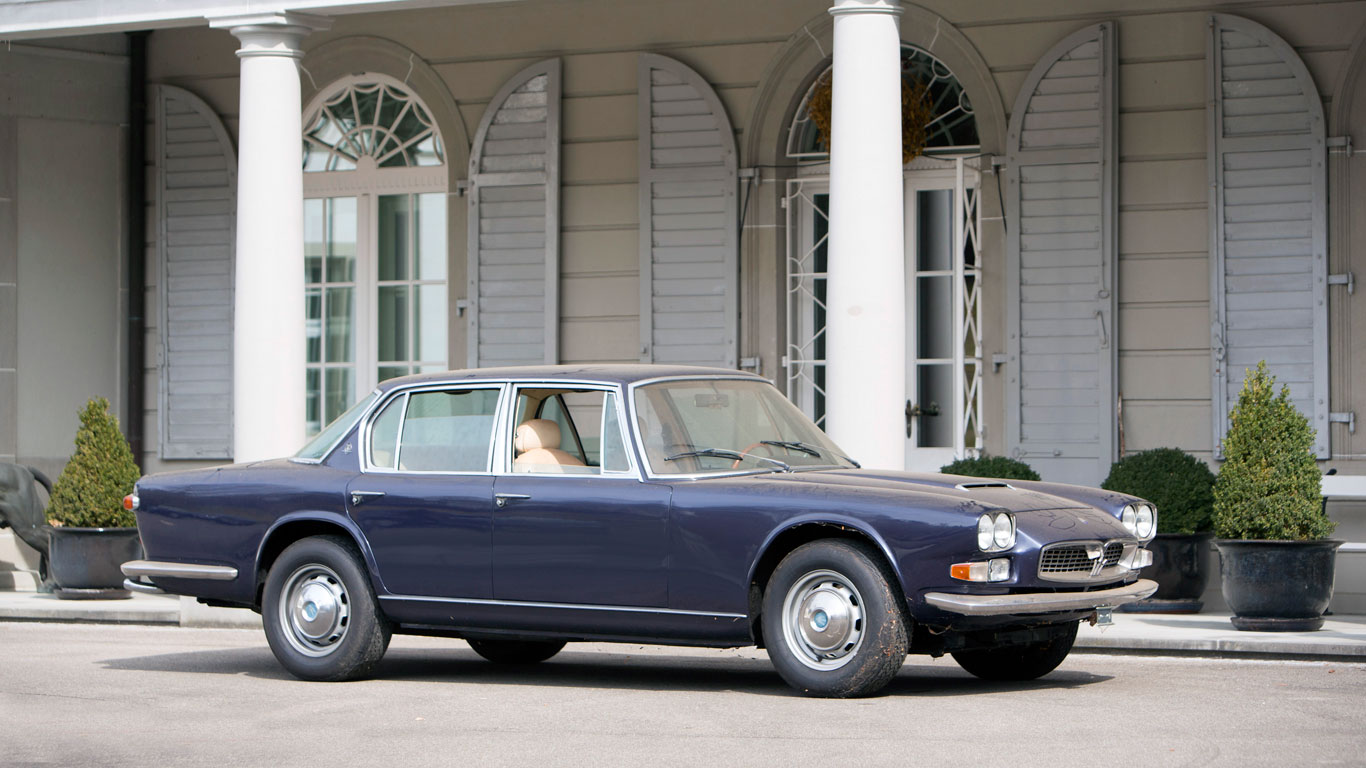 The Maserati Quattroporte was introduced at the 1963 Turin Motor Show with coachwork designed by Pietro Frua. This 1968 car is notable for the twin headlights, which were added to the Series II model in 1965. These had already been fitted to cars exported to America.

It was never a huge seller, with production estimates ranging from 679 to 776, depending on the source. Thanks to the increased power from its 4.7-litre engine and rigid rear axle, the Series II car is the Quattroporte to own. 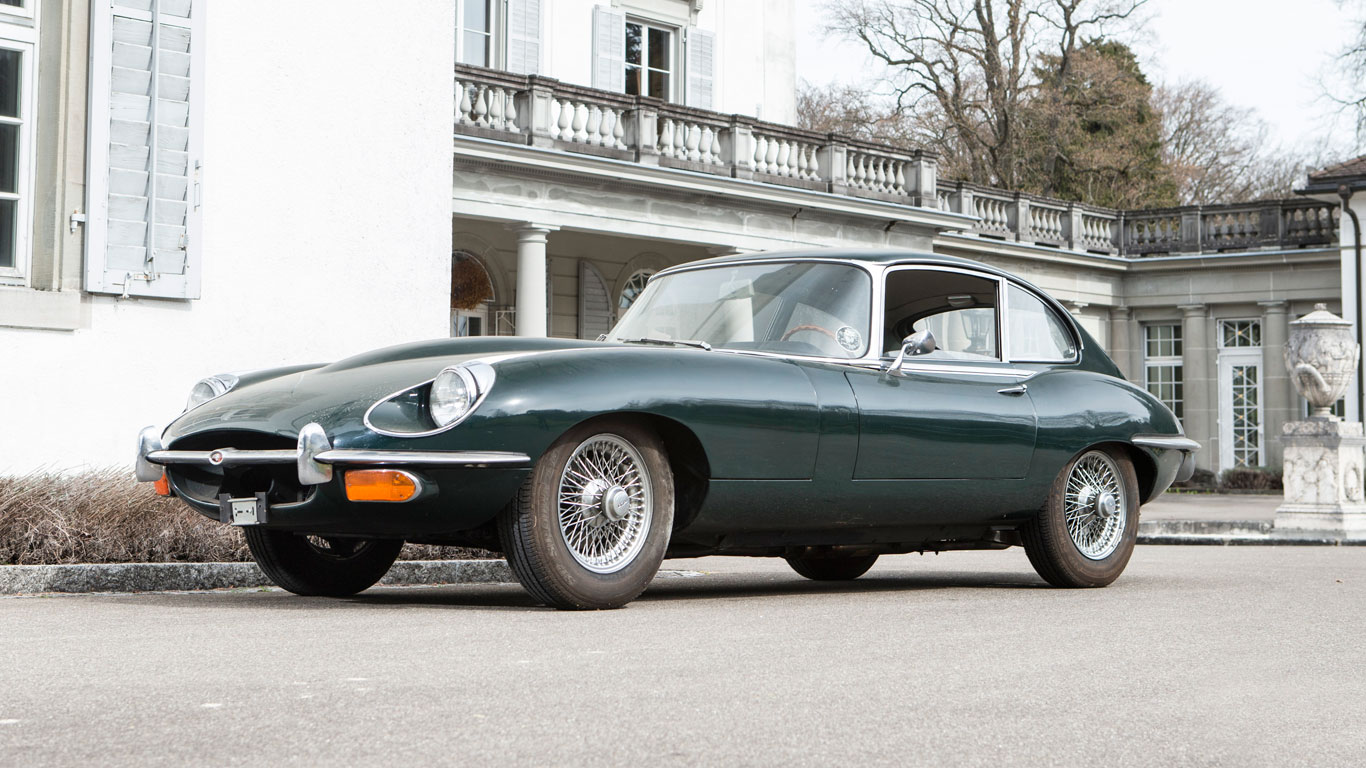 The second E-Type in the collection happens to be a Series 2 model, first introduced in 1968. The second generation E-Type ushered in a number of design changes, most notably the removal of the glass headlight covers, a larger grille and revised bumpers.

Bonhams has slapped a relatively low pre-auction estimate on this 1970 car, which is probably reflective of its ‘castle-find’ condition. For some context, a dry-stored Series 2 sold for £51,750 at the Goodwood Members’ Meeting sale in March 2017. 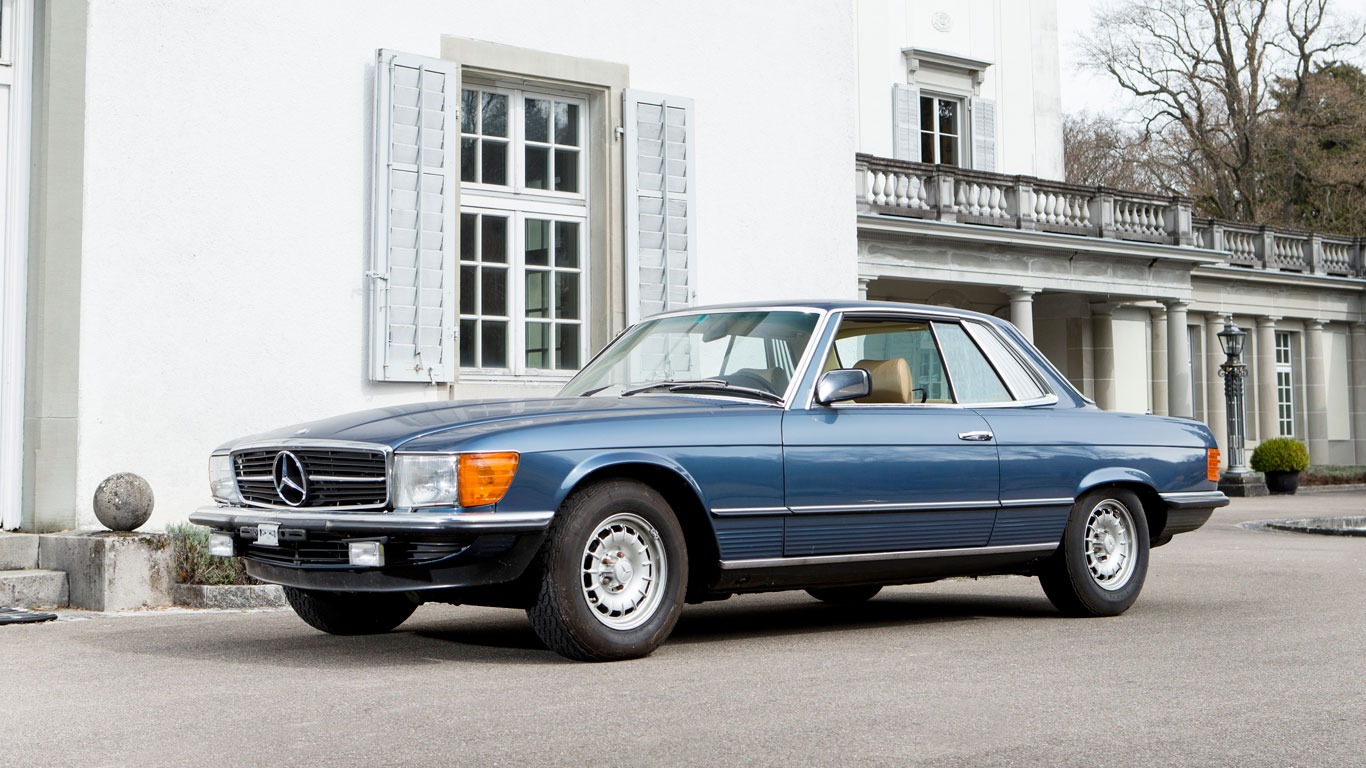 To create the SLC, Mercedes-Benz took the R107 SL, stretched the wheelbase and added a roof and two rear seats. The majority of cars were powered by V8 engines, including, in the case of the 500 SLC, a 5.0-litre variant. 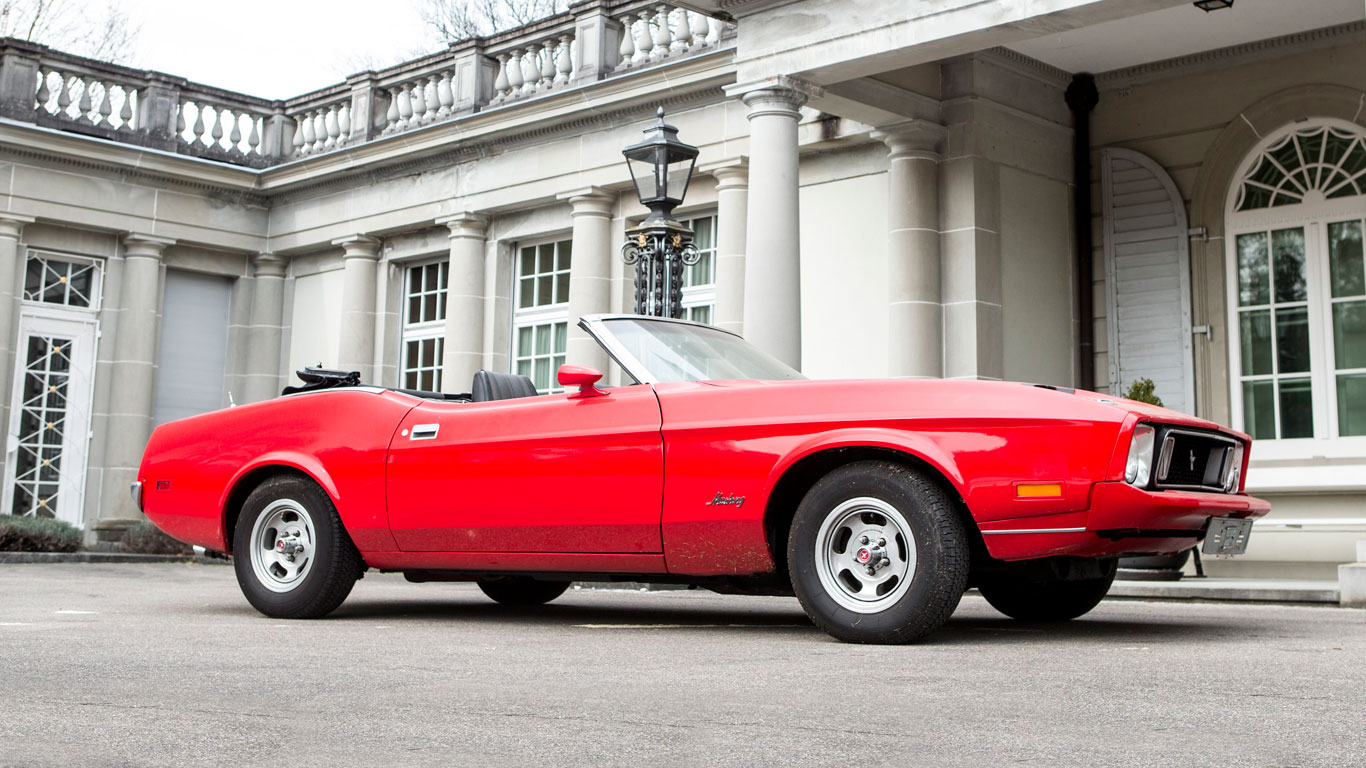 The final car in the Swiss collection is perhaps the most surprising: a 1973 Ford Mustang convertible. This American import is a very late first-generation model, as the much-maligned Mustang II arrived in 1974.

The convertible Mustang enjoyed a surge in popularity in 1973, with rumours circulating that Ford wouldn’t be building a drop-top version of the second generation car. Just under 12,000 were produced in 1973, nearly double the number recorded in the three previous years.