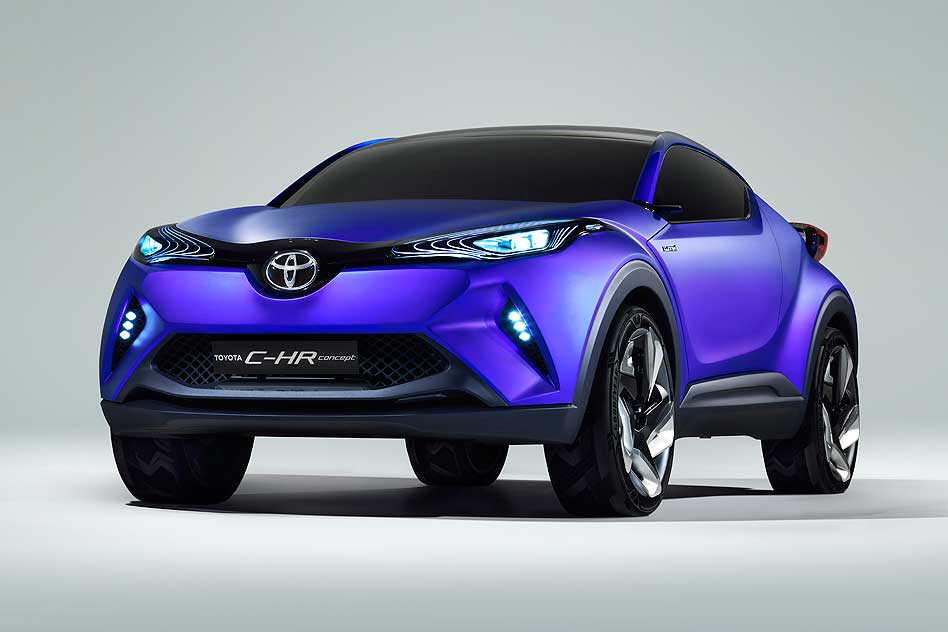 Toyota has revealed the new C-HR Concept crossover Paris Motor Show 2014 show car, a model that both previews the brand’s new design language and also hints at a future Nissan Juke rival from the Japanese giant.

The new C-HR Concept sports one of the boldest Toyota designs in years, with the firm describing the new design approach as expressive and with a diamond styling theme: such themes will be seen on future showroom-ready Toyotas.

Rather like the Nissan Juke, the Toyota C-HR Concept is a coupe-look crossover, with a flowing roofline but big wheels and prominent wheelarches. Both front and rear lamps – particularly the floating rear lights – stand out, and both headlamps and LED running lamps hint at the future face that’ll appear on forthcoming Toyotas.

We can’t remember ever seeing a Toyota grille logo this large and proudly displayed, either.

As is the case with all new Toyotas, the C-HR Concept uses a hybrid drivetrain; its production equivalent would likely use a petrol-electric powertrain similar to that in the Yaris Hybrid or Auris Hybrid. The firm hasn’t stated whether it could have any plug-in capability.

While a showroom equivalent is some way off – it would have to grow two rear doors to be viable, for starters – the C-HR Concept does confirm Toyota’s desire to enter the compact crossover segment.

Just as importantly, it shows that, finally, expressive design is coming to the firm’s future cars, and that much more exciting-looking Toyotas are now on the agenda.

The Toyota C-HR Concept will be officially revealed at the Paris Motor Show 2014 at 8am on 2 October; it won’t be the only new car gunning for the hit Nissan Juke either, with Fiat revealing the 500X and Honda showing its Euro-spec HR-V. We’ll be there to bring you news of them all – and more.