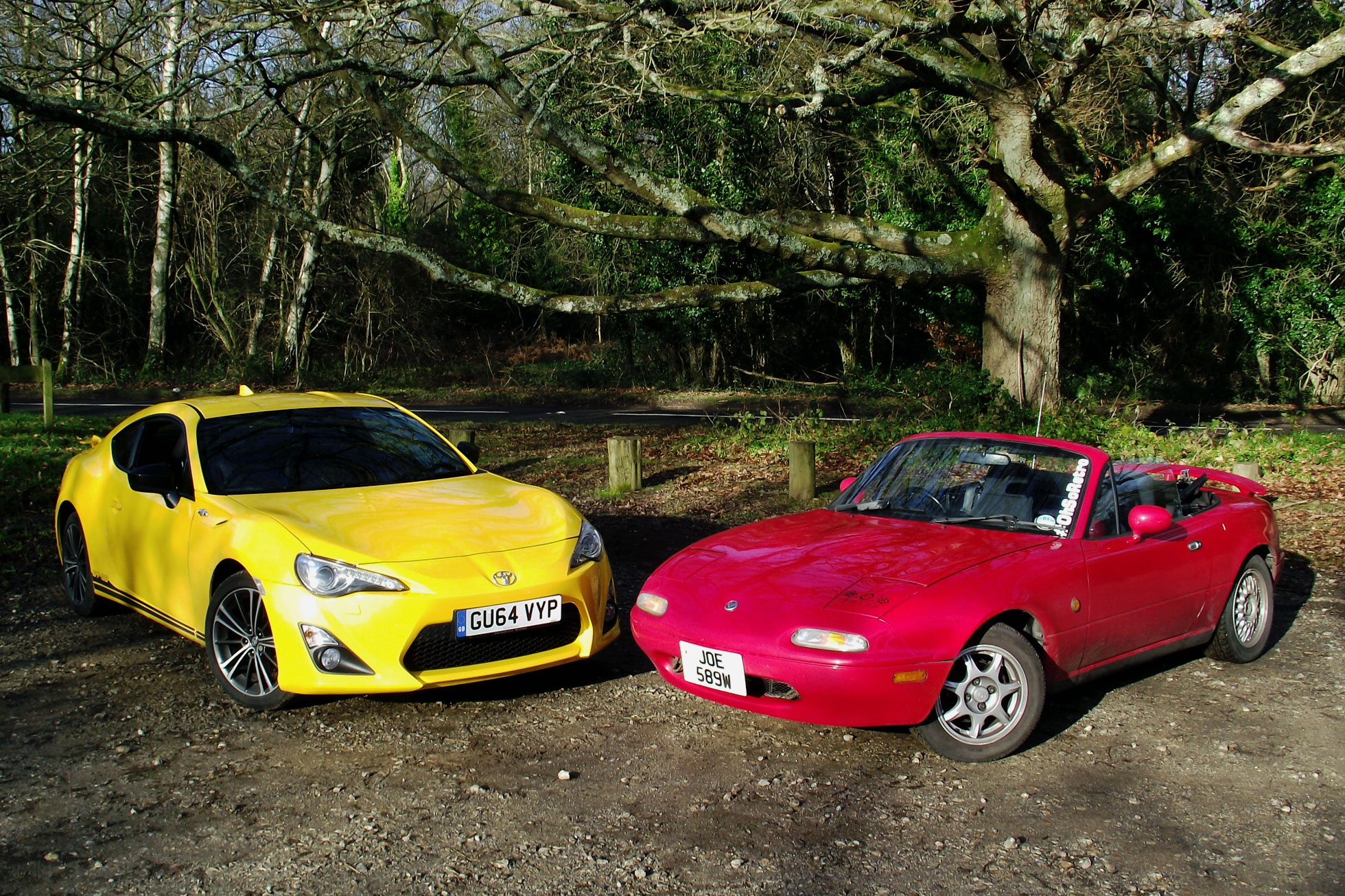 Fuel prices are going down – but some organisations are warning that it’s only a momentary blip and they’ll be back up before you can say “£1 per litre.” So, what better way of making the most of cheap fuel than going for a drive for the fun of it?

Our cars of choice: one recent addition to the MR fleet, a 1993 Mazda MX5 (or Eunos Japanese import, to be precise). And Toyota’s new GT86 Giallo special edition, in attention-grabbing yellow. There’s no room for bland, silver sports cars here, thank you very much.

What have they got in common? Quite a lot, as it goes: both are rear-wheel drive, front-engined and Japanese. Both are powered by naturally-aspirated four-cylinder engines which like to be revved but won’t win any Top Trumps competitions. 115hp in the Mazda, 200hp in the Toyota.

Despite this, they also both offer an awful lot of fun for the money. Admittedly one cost £500, while the other will set you back £27,495 – but that’s the sort of money you’d pay for a fast Golf these days. Sure, the Golf would obliterate it in a race, but that’s not the point.

The location for our little jaunt? Well, although tempting to jump on the Eurostar or head across to Wales, we wanted to prove that fun can be had in a car without spending hours hunting for perfect hooning roads. A map was looked at, the Surrey Hills picked for their spitting distance to London, and off we set.

It soon became clear that, if we’d wanted to blend in, our choice of cars perhaps wasn’t the best. As we meandered through suburbia, people pointed, heads turned, children shouted. Sure, attention can be fun, but it’s not what we were after. Honest. Even if I was cruising in the MX5, top down, with an eskimo hat keeping my ears warm. 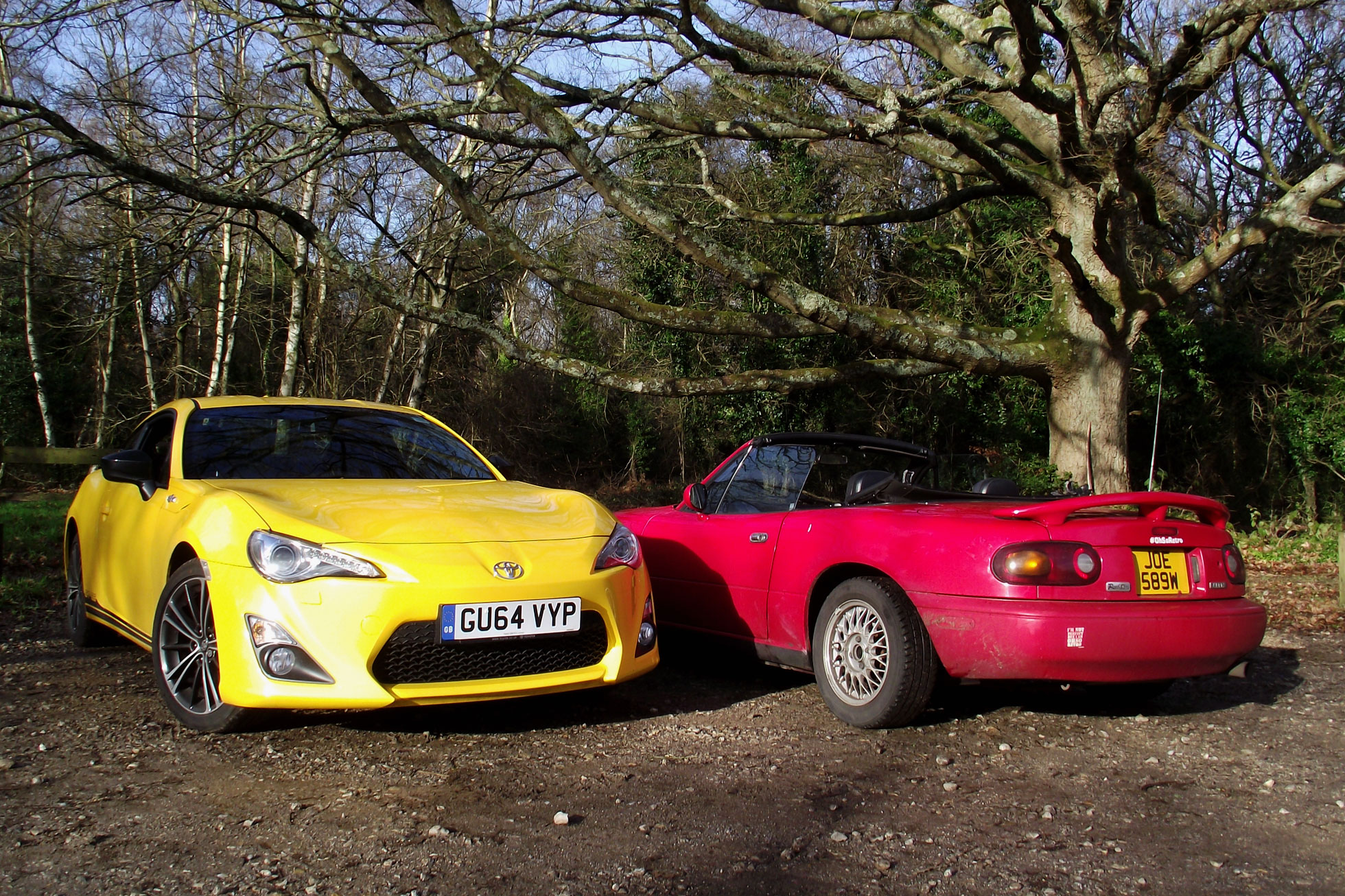 But soon the roads opened up. We passed those lovely national speed limit signs and Eliott in the Toyota put his foot down. I did the same, the Mazda’s noisy non-standard exhaust warning Surrey wildlife that trouble was on its way.

The roads were ideal. Twisty, yet open enough to be able to push on without fearing a farm vehicle or cyclist just around the corner. On these roads, in these cars, huge speeds weren’t required to have fun.

Which is good, because cyclists were everywhere. Nice roads, good scenery and a lovely day meant most of London seemed to have headed for the hills donned in lycra. You wouldn’t have thought a pair of Japanese sports cars and serious road cyclists would mix well, but it kind of worked. We were there for similar reasons, just our mode of transport different, and there seemed to be a sense of mutual respect. No grief was received as we went about our business, swapping cars and snapping photos.

In return we gave no grief, just plenty of room. That’s right – on some twisty roads, just outside the capital, petrolheads and cyclists successfully mixed without incident or aggro. So many drivers and cyclists fail to get along on the roads of London every day, so how come they manage up in the hills?

As is normal at this time of year, we soon started to lose the sun. We said goodbye to the hills, and mooched off home. As I cruised around the M25 I pondered – what’s the best way of getting out there and enjoying our roads? In truth, it doesn’t really matter. Whether you like your cars to be front-wheel drive hot hatches, or you’re more inclined to use just the two wheels, fun can be had whatever the transport.

But if you want my opinion, rear-wheel drive Japanese sports cars are a good way to do it.