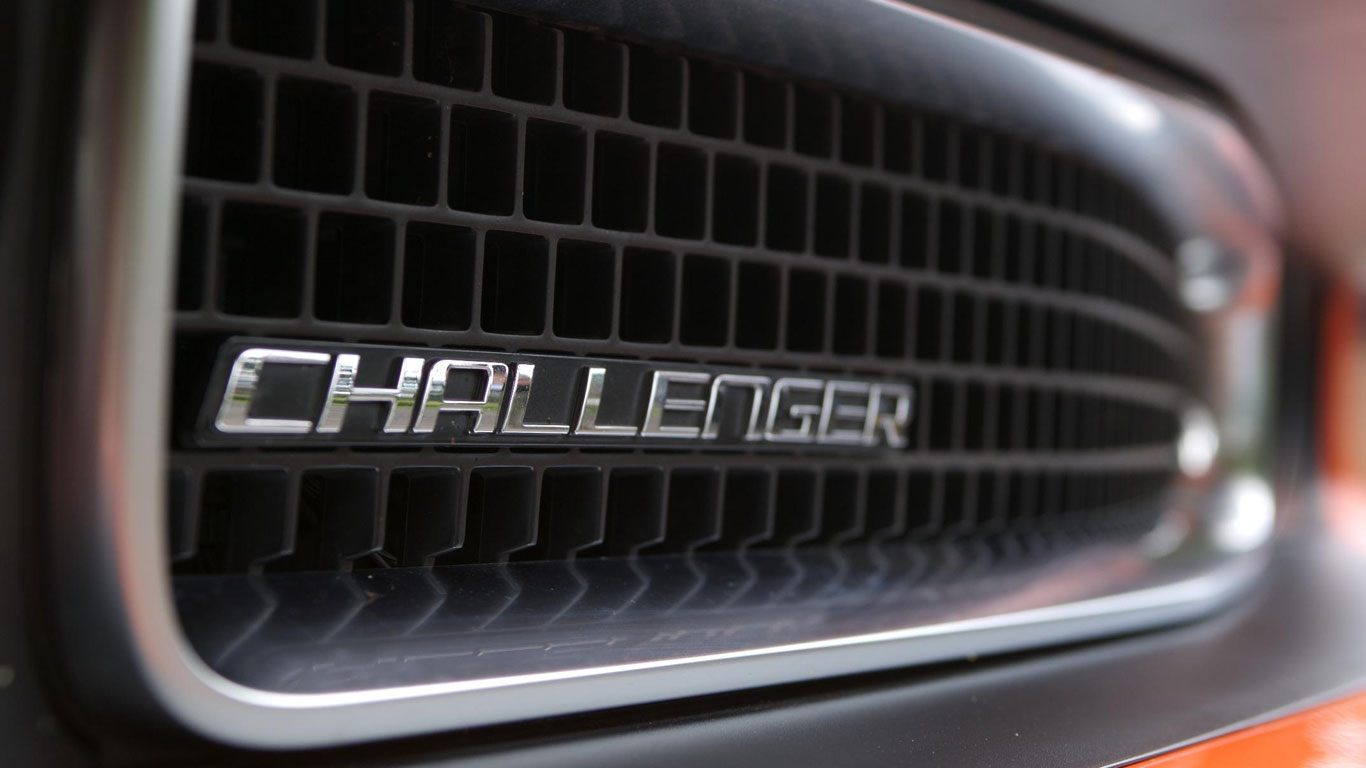 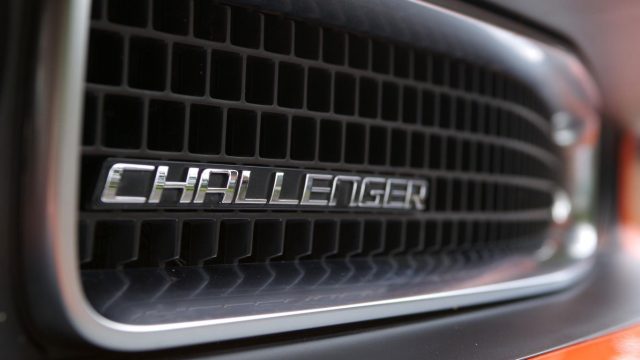 Oh no, it’s another one of those ‘best of’ lists. But hear us out, because we’re diving deep into the world of car names, and specifically the greatest names of all-time.

We’ve selected 20 of the best and have included the Oxford English Dictionary definition for the majority of our choices. What’s in a name? It’s time to find out… 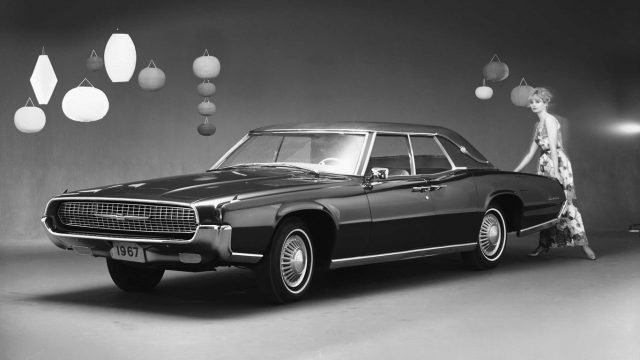 If Jeremy Clarkson is to be believed, this is the greatest car name of all time. In one of his books, he said: “The trouble is that most of the best words have already been used by the Americans. Surely, the best name of them is ‘Thunderbird’, which says it all. Roll up at a party, announce that you have a Thunderbird and when you go, all the best-looking girls will go too.”

Ford had considered over 5,000 names before settling on Thunderbird, with a young stylist, Alden ‘Gib’ Giberson credited for the spark of inspiration. He had once lived in the southwest of America, where the legend of the Thunderbird was well-known. For this troubles, Giberson claimed a reward of $95 and a pair of trousers from Saks Fifth Avenue. 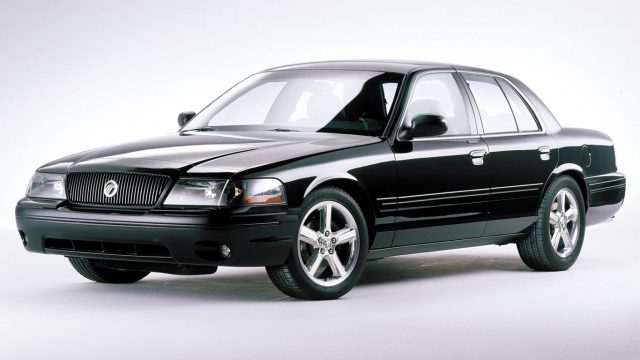 “Marauder.” Noun, “A person who marauds; a raider.”

The Marauder name dates back to the late 1950s, when Ford introduced a range of V8 engines for the Mercury, Edsel and Lincoln brands. There was even a Super Marauder, complete with a trio of two-barrel carburetors and an output of 400hp. The Marauder became a Mercury model in its own right in the 1960s, culminating with the 302hp ‘hot rod’ of the new millennium, pitched directly at the Chevrolet Impala SS. With a Mustang Mach 1 heart, it was befitting of the Marauder name. 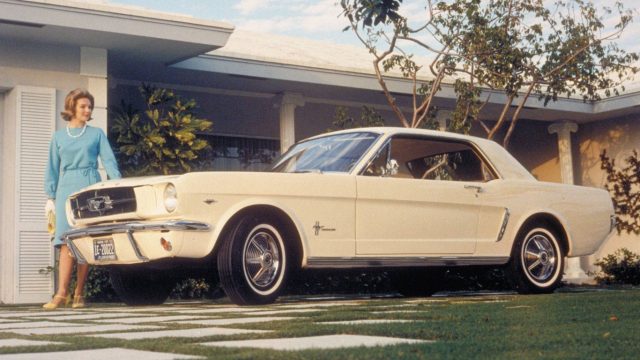 “Mustang.” noun, “An American feral horse which is typically small and lightly built.”

It’s arguably one of the most famous car names in the world and one of a select few known only by its ‘surname’. Nobody’s 100% sure why the Mustang name was chosen. Was it a tribute to the P-51 fighter aircraft of WWII, a reference to that American feral horse, or even a nod to the Southern Methodist University Mustangs football team? Although the last theory is unlikely, one thing’s for sure: Ford nailed this one. 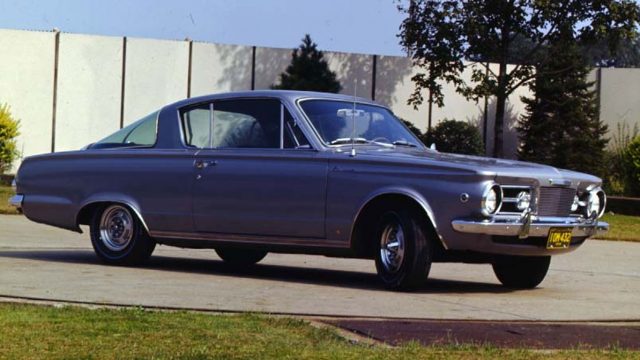 John ‘Dick’ Samsen is known for his work on the original Ford Thunderbird and Plymouth Barracuda, and was indeed instrumental in the naming of the ‘Cuda. Speaking about the car’s development, he said: “The Plymouth Division came up with the name ‘Panda’ for the car, and when we designers made a fuss, told us to suggest names. My list of names included ‘Barracuda’, and it was chosen.” In 2015, Fiat Chrysler filed a trademark for the Barracuda name. 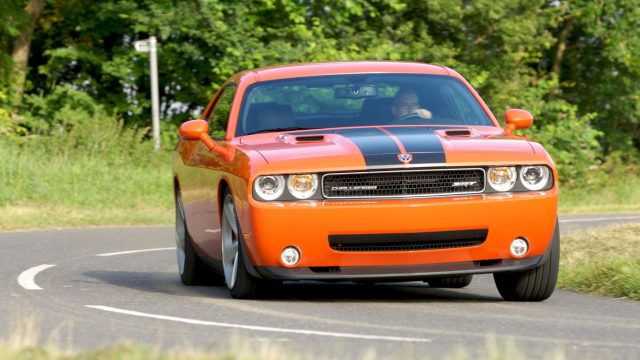 “Challenger.” Noun, “A person who engages in a contest.”

The Challenger name is intrinsically linked to Dodge’s answer to the Mustang and Camaro, but its origins date back to 1959 and the launch of the Silver Challenger. This special edition was based on the Dodge Coronet and arrived a decade before the more famous Challenger. In the meantime, Studebaker had launched its own Challenger, but the future belonged to Dodge. A starring role in ‘Vanishing Point’ played a pivotal role in cementing the legendary status of the name. “There goes the Challenger, being chased by the blue, blue meanies on wheels…” 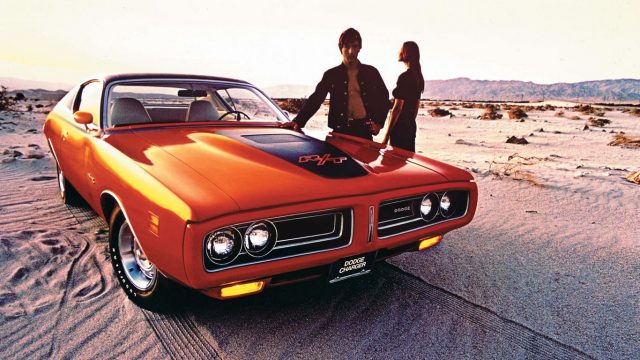 “Charger.” Noun, “A horse ridden by a knight or cavalryman.”

The Charger name made its debut on the 1964 Polara-based concept car, before being introduced as a nameplate on the first-generation Charger of 1966. The second-generation model, launched in 1969, laid the foundations for the creation of an American icon, before interest was renewed with the arrival of ‘The Dukes of Hazzard’ in 1979. The ‘General Lee’ became the most famous Charger in the world. 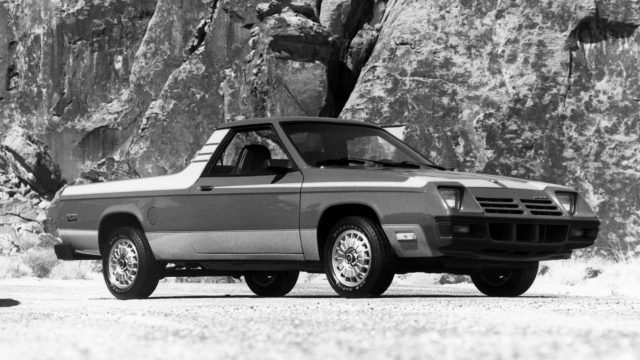 “Rampage.” Noun, “A period of violent and uncontrollable behaviour by a group of people.”

Barbarian, Invincible, Warrior, Titan, Blade, Raptor: just half a dozen examples of terribly muscular names given to pick-up trucks. But all of these are mere pansies compared to the might and majesty of the Dodge Rampage. The 1980s pick-up was also badged as the Plymouth Scamp, which doesn’t have the same amount of muscle. The Rampage name was resurrected for a 2006 concept, complete with a 5.7-litre Hemi engine. 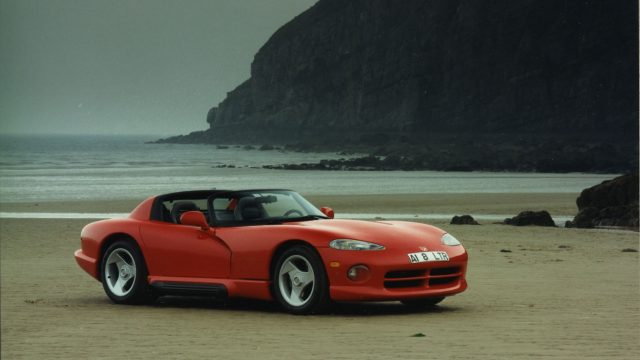 “Viper.” Noun, “A venomous snake with large hinged fangs, typically having a broad head and stout body, with dark patterns on a lighter background.”

The Dodge Viper first appeared as a concept car in 1989, before making its production debut in 1992. Bob Lutz, then of the Chrysler Corporation, made no secret of his love of the Shelby Cobra, so it was no coincidence what this V10-engined sports car was named after a venomous snake. With letters and deposits pouring into Chrysler, Lutz assembled a team tasked with making the concept car a reality. They worked in room named ‘the snake pit’. How appropriate. 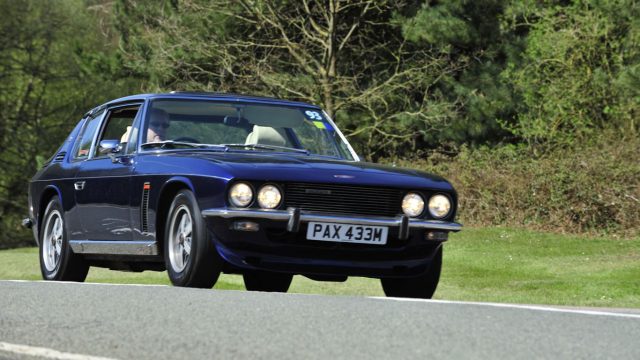 Enough of this American love-in, it’s time to give some credit to a selection of cars on the other side of the Atlantic. We’ll return to Clarkson for a moment, who is clearly torn on the subject of the best car name. Of the Interceptor, he said: “It’s the coolest name ever given to a car. ‘I’ll pick you up at eight. I’ll be in the Interceptor.’ Imagine being able to say that. Or even: ‘Darling. About tonight. Shall we take the Interceptor?’ It sends a shiver down your spine. Maserati is a good name. Thunderbird is even better. But the Interceptor? That’s the best of them all.” 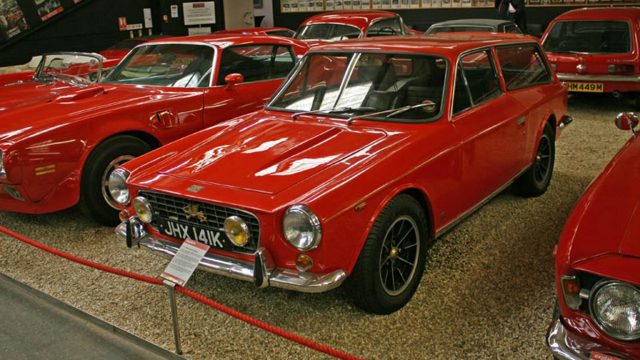 “Invader.” Noun, “A person or group that invades a country, region, or other place.”

Giles Smith and Bernard Friese founded the Welsh carmaker Gilbern, each lending the first part of their forename to create the company name. A pretty cool approach, which puts us in mind of TVR and TreVorR Wilkinson. The Invader, which arrived in 1969, is probably one of the greatest car names in the world. Not bad for a small car company from Pontypridd. 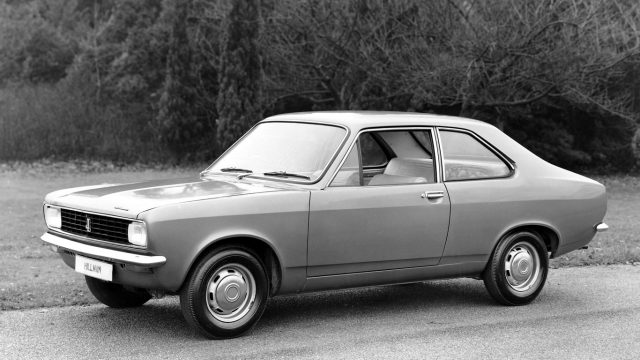 “Avenge.” Verb, “Inflict harm in return for (an injury or wrong done to oneself or another).”

Depending on your age, The Avengers will either conjure up images of Marvel Comics superheroes or a 1960s spy show. Scarlett Johansson or Diana Rigg? Whatever, the Avenger is one of the greatest car names ever to grace a bootlid. Or is it? Given the dictionary definition, is Avenger a suitable name for a family car? Answers on a postcard to the usual address. 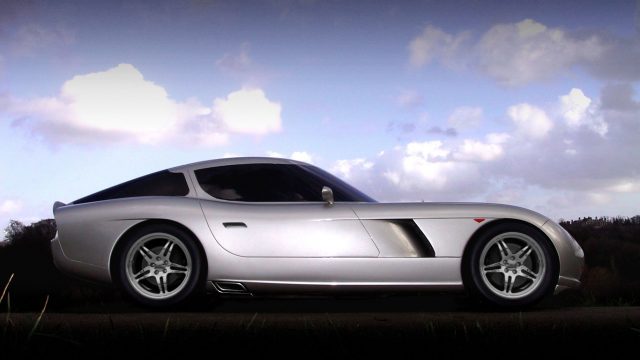 “Fighter.” Noun, “A person or animal that fights,” or “A fast military aircraft designed for attacking other aircraft.”

Given Bristol’s aerospace heritage, it’s no surprise to find a catalogue of aeronautical-inspired names in its back-catalogue. The Bristol F2b Fighter was a First World War reconnaissance and fighter aircraft, but also a sports car unveiled in 2004. This gullwing coupe was powered by the same V10 found in the Viper and fewer than a dozen were ever built. 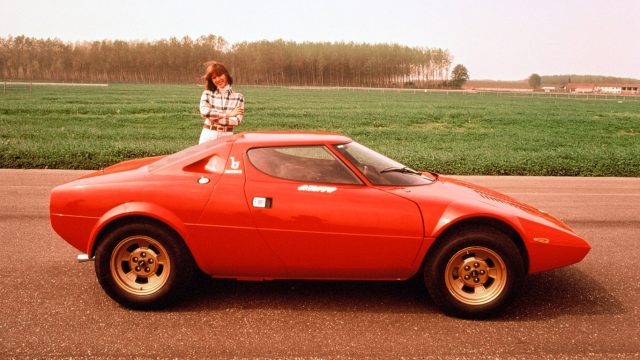 The Stratos name first appeared on the Bertone-styled Stratos Zero of 1970, before appearing on the Lancia Stratos HF in 1973.

In Greek, ‘stratos’ means ‘army’, and is also the name of an ancient Greek city. To some, it conjures up images of something you’d splash all over. But whatever, it just happens to be the name of one of the greatest rally cars of the 1970s. 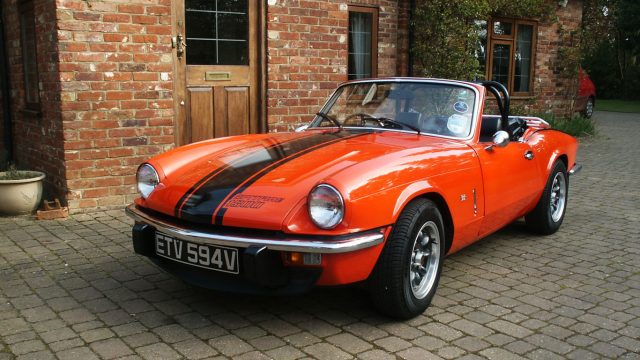 “Spitfire.” Proper noun, “A single-seat, single-engined British fighter aircraft of the Second World War, designed by Reginald Mitchell and produced by the Supermarine company. It is particularly remembered for its role in the Battle of Britain.”

Choosing to name your sports car after one of the nation’s best-loved aircraft was an inspired move by Triumph, although we’re not sure it would have been quite so well received in Germany. “Der Spitfire ist das ideale Fahrzeug für das Fahren zu zweit,” said the press ad, which, roughly translated, means: “The Spitfire is the ideal vehicle for driving in pairs.” That’s quite a selling point. 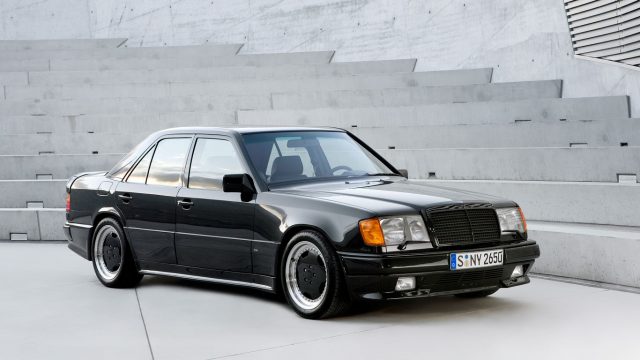 “Hammer.” Noun, “A tool with a heavy metal head mounted at right angles at the end of a handle, used for jobs such as breaking things and driving in nails.”

In 1986, AMG inserted a 5.0-litre V8 into an E-Class coupe and created ‘The Hammer’. In a stroke, the AMG name was thrust onto the world stage, most notably in the US, where it is viewed as the genesis of Mercedes-AMG. 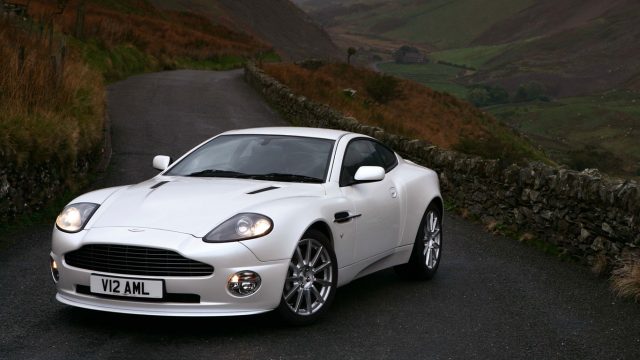 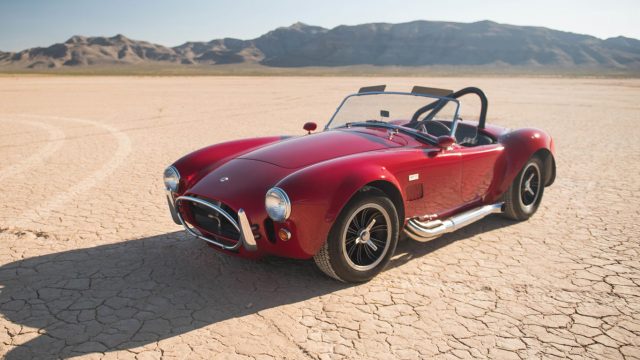 “Cobra.” Noun, “A highly venomous African or Asian snake that spreads the skin of its neck into a hood when disturbed.”

Thanks to Carroll Shelby, the AC Cobra was created when a Ford V8 engine was shoehorned into the AC Ace roadster. ‘Cobra’ was a wonderfully apt name for these super-powerful roadsters, which were renowned for their brutish performance and hard-to-tame handling characteristics. 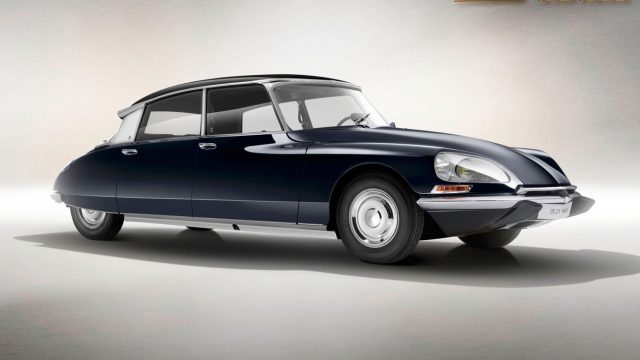 “Goddess.” Noun, “A woman who is greatly admired, especially for her beauty.”

To make sense of the DS name, you must channel your inner Officer Crabtree from ‘Allo ‘Allo’. You see, DS is pronounced in French as ‘Déesse’, or ‘Goddess’ in English. A suitably understated approach for one of the most technologically advanced and beautiful cars of the 20th century. 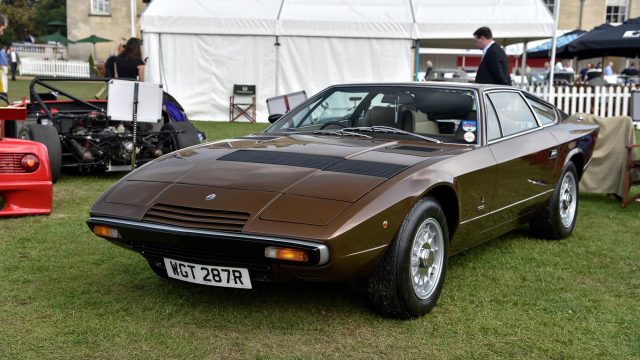 Maserati has a history of naming cars after winds. Ghibli, Bora, Mistral, Karif and Shamal, to name but five. Choosing the best is tricky, but we’ve selected the Khamsin. It helps that Alfieri Maserati was born with such an evocative sounding surname. 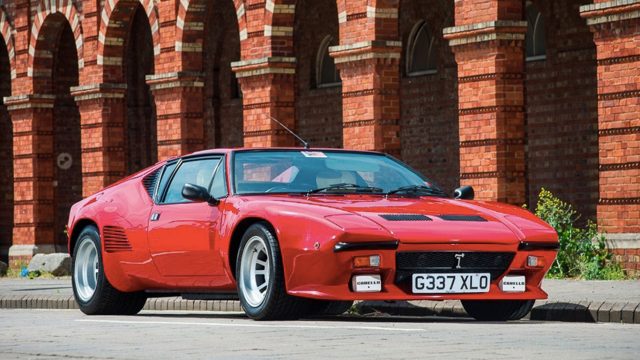 Speaking of evocative surnames, ‘Alejandro de Tomaso’ isn’t half bad. Born in Argentina, de Tomaso founded the De Tomaso car company in Modena, Italy. Some of the car names were inspired: Mangusta, Longchamp and Deauville. But the best of the lot was Pantera, which is Italian for Panther.

These are our favourite car names of all-time, what are yours?