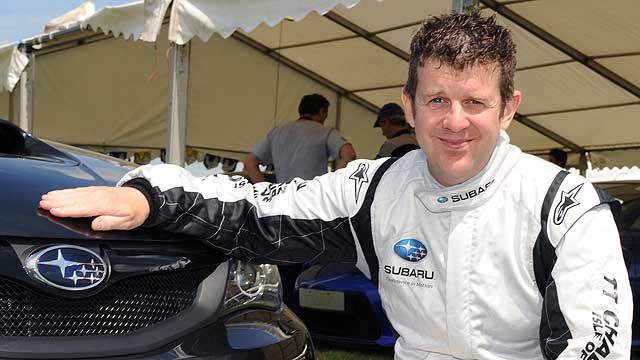 Subaru will return to the Isle of Man TT course this month with rally ace Mark Higgins – to try and break its own four-wheeled course lap record.

The firm is heading back to the TT course with the new WRX STi, three years after setting a lap record of 19 minutes 56.7 seconds with Higgins at the wheel.

Subaru will run on the closed course on 31 May, 2 June and 4 June to try and break the 115mph record – and hopefully create some new headlines after YouTube footage of the previous run generated nearly 10 million views!

This may, of course, be due to the self-described 150mph ‘moment’ Higgins had at the bottom of Bray Hill…

Higgins said: “Setting the record was totally exhilarating and one of the highlights of my career – Bray Hill certainly added to the thrill!”

As before, the US-spec 300hp Subaru WRX STi will be almost completely standard, including running on standard brakes and road-legal tyres. Springs and dampers will be modified, but only to deal with the IoM TT course’s many crests, dips and jumps; the car will also have a full roll cage, race harness and fire extinguisher.

“As a Manxman,” added Higgins, “I love the TT Races and I have a huge amount of respect for the TT riders and what they do. It will be a real honour to attempt a new fastest car lap.”