Winging it: celebrating some of the best rear wings and spoilers of all time – including the Ferrari F40 and Ford Escort RS Cosworth 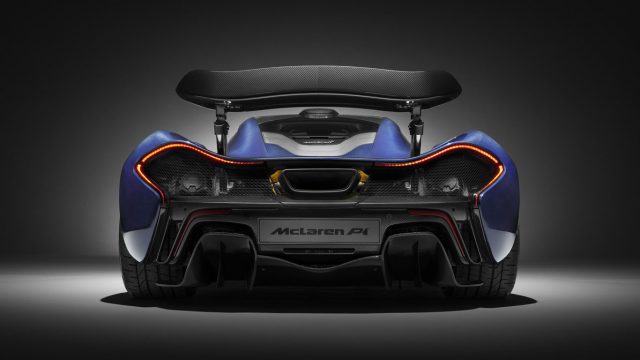 Spoilers: not great if somebody ruins the ending of a latest boxset as you make idle conversation at the watercooler, but from an automotive perspective, a spoiler can be a thing of beauty.

We should point out that spoilers and wings are two different devices. A spoiler is designed to reduce lift and improve aerodynamics, while a wing serves to increase downforce. A nutshell guide in the extreme, but it provides a little background. Read on to discover what has made our shortlist. 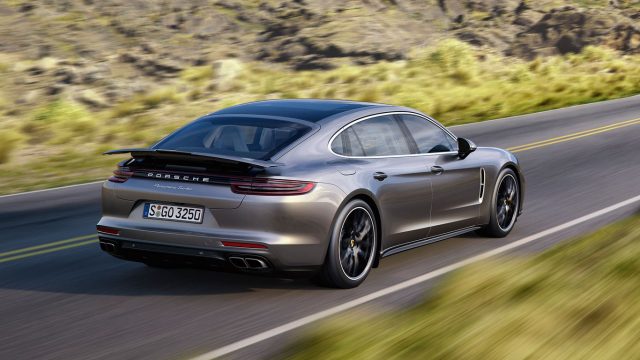 ‘Wildest’, perhaps not, but ‘stylish’, most certainly. None other than the good people at GQ magazine described the slice of engineering genius found on the Porsche Panamera Turbo as “the world’s most stylish rear wing,” and they know about style than we do.

It trumps the rear wing on the outgoing Panamera courtesy of a slick two-stage deployment, arising majestically at 80mph. Not the wildest rear wing you’ll ever see, but it inspired the creation of this gallery… 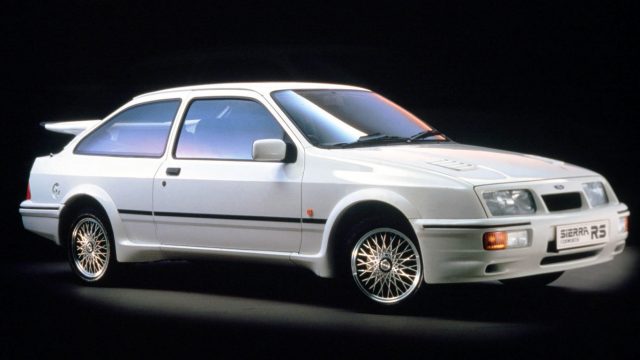 The rear wing on the Ford Sierra RS Cosworth is the hammer to the Panamera’s precision engineered electronic wizardry. In 1985, when Ford introduced this whale-tailed blue-collar hero, the Sierra was transformed from family motor to homologation special.

If nothing else, that whale tail perched on the back of the RS Cosworth acted like a beacon for would-be car thieves, and an object of desire for young and impressionable car fans. Later, Ford upped the ante once again with a two-piece set-up on the RS500. 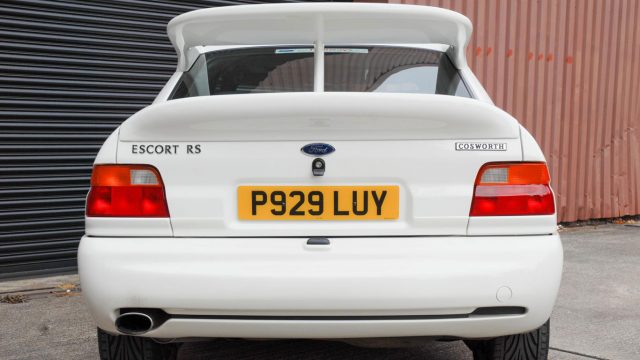 Ford became synonymous with wild body kits and ‘in-yer-face’ rear wings and spoilers. The Escort RS Cosworth – which was actually based on the Sierra RS Cosworth platform – picked up where its curvaceous predecessor left off, complete with double rear wing.

This was no mere cosmetic exercise. The whale tail provided a huge amount of downforce at high speeds and its design was the result of endless hours of development in Ford’s German wind tunnels. 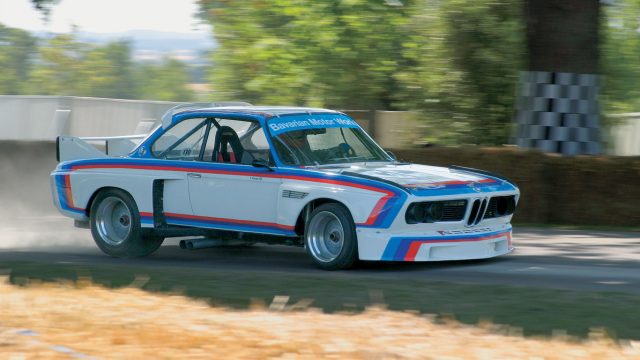 We’re keeping gallery free of motorsport and aftermarket DIY creations, but homologation specials are fair game. Take the BMW 3.0 CSL, for example. It’s an iconic in its own right, arguably one of the greatest homologation cars of all-time.

But the ‘Batmobile’, of which only 39 were ever made, took things to an entirely new level. Feast your eyes on the deep front air dam, then move to the left, past the fins perched atop the front wings, past the roof spoiler and then, boom, that ginormous rear wing. That’s the point at which your chin hits the floor with an almighty thud. 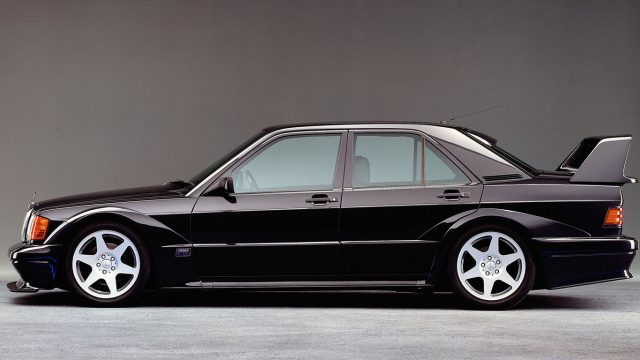 Anything BMW can do, Mercedes-Benz can do… er… bigger? If the 190E 2.5-16 Evolution II looks wild today, just think what it must have looked like when it was unveiled at the 1990 Geneva Motor Show.

From the speed hump sharpening chin spoiler to the 17-inch alloy wheels, the Evo II was a world away from the regular 190E. The highlight, of course, was the huge, adjustable rear wing, designed to keep this 155mph DTM car for the road on the straight and narrow. A total of 502 units were produced, each one finished in blue black metallic. 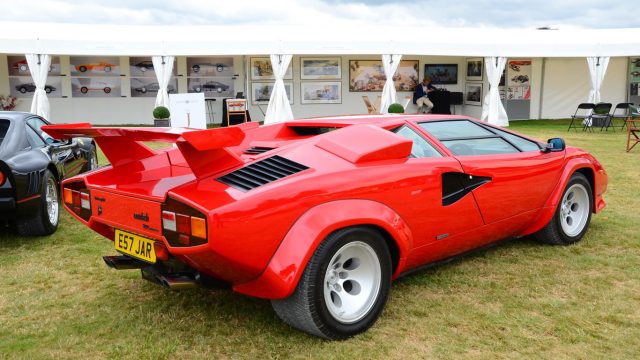 Some people will prefer the purity and simplicity of the original Lamborghini Countach, and that’s their right. Indeed, the LP400 is so effortlessly beautiful, you’d swear blind it was sculpted by an artist.

An optional V-shaped wing first appeared on a Walter Wolf Countach, improving stability, but reducing the top speed. As the Countach matured, the rear wing became Lamborghini’s equivalent of that other 80s favourite: shoulder pads. 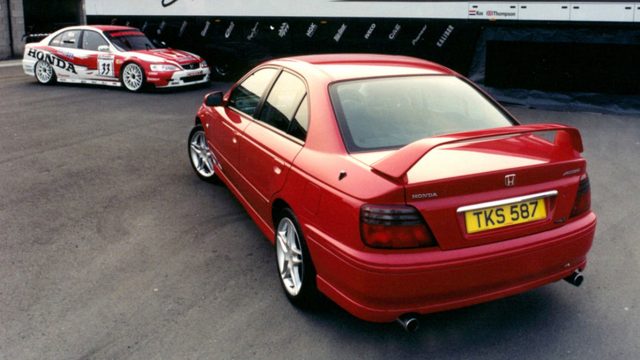 The rear wing on the Accord Type R might not be the biggest or the most outlandish example you’ll ever see, but it warrants a place on our list by virtue of the sheer madness of the thing. It’s hard to think of a more conservative car than the Honda Accord, yet here is a Type R that’s able to stand shoulder-to-shoulder with the Integra and Civic.

Even with that Touring Car style rear wing, the Accord Type R oozed Q-car appeal, but it had an ability to show a BMW M3 a thing or two. The wing was a delete option from the factory, but fortunately the majority of owners saw sense and kept it on. 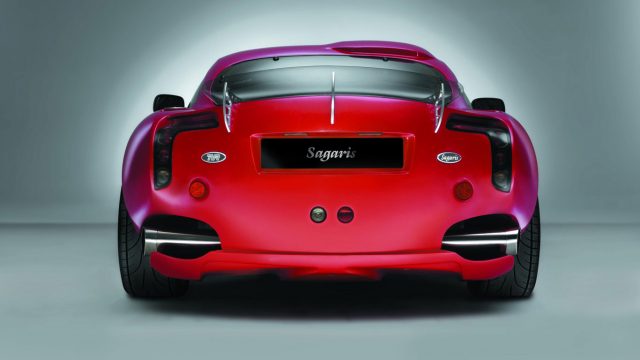 TVR’s final model was perhaps its very best. The Sagaris appeared to have it all: the theatre and excess we’d become accustomed to during TVR’s twilight years, along with an ability to keep up with any self-respecting supercar.

On the face of it, the transparent rear spoiler, complete with machined-aluminium posts, looks like another example of TVR letting its hair down. But it served a purpose: giving the driver an unobstructed view of the car they had just overtaken. 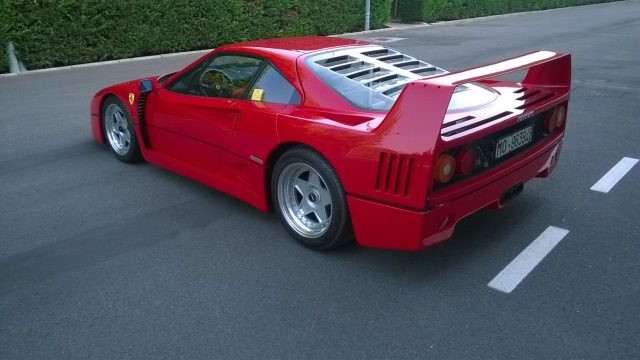 In Ferrari’s own words, the F40’s integral full-width rear wing “presented the ultimate eighties power statement”. That it looked the part was in no doubt, but it also helped to keep the F40 on the straight and narrow at speeds of up to 201mph. 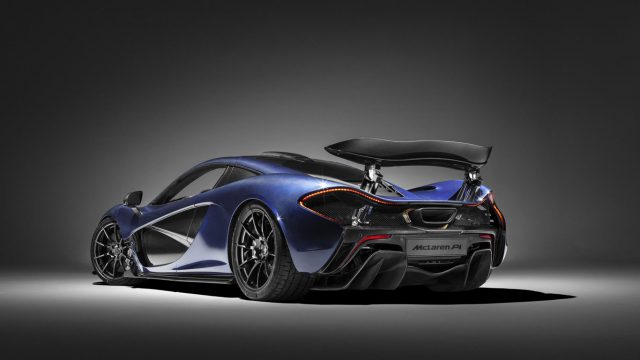 The McLaren P1 boasts what is arguably one of the most beautiful rear wings of recent years. It’s part of an ‘active aerodynamics’ programme, designed to produce more downforce than any other road car.

The moveable front and rear wings can produce a peak of 600kg of downforce in Race mode, while the rear wing incorporates an F1-style Drag Reduction System (DRS), which reduces the angle to zero degrees when a button is pressed, reducing drag by 23%.

Revealed: the best (and worst) carmakers for customer service