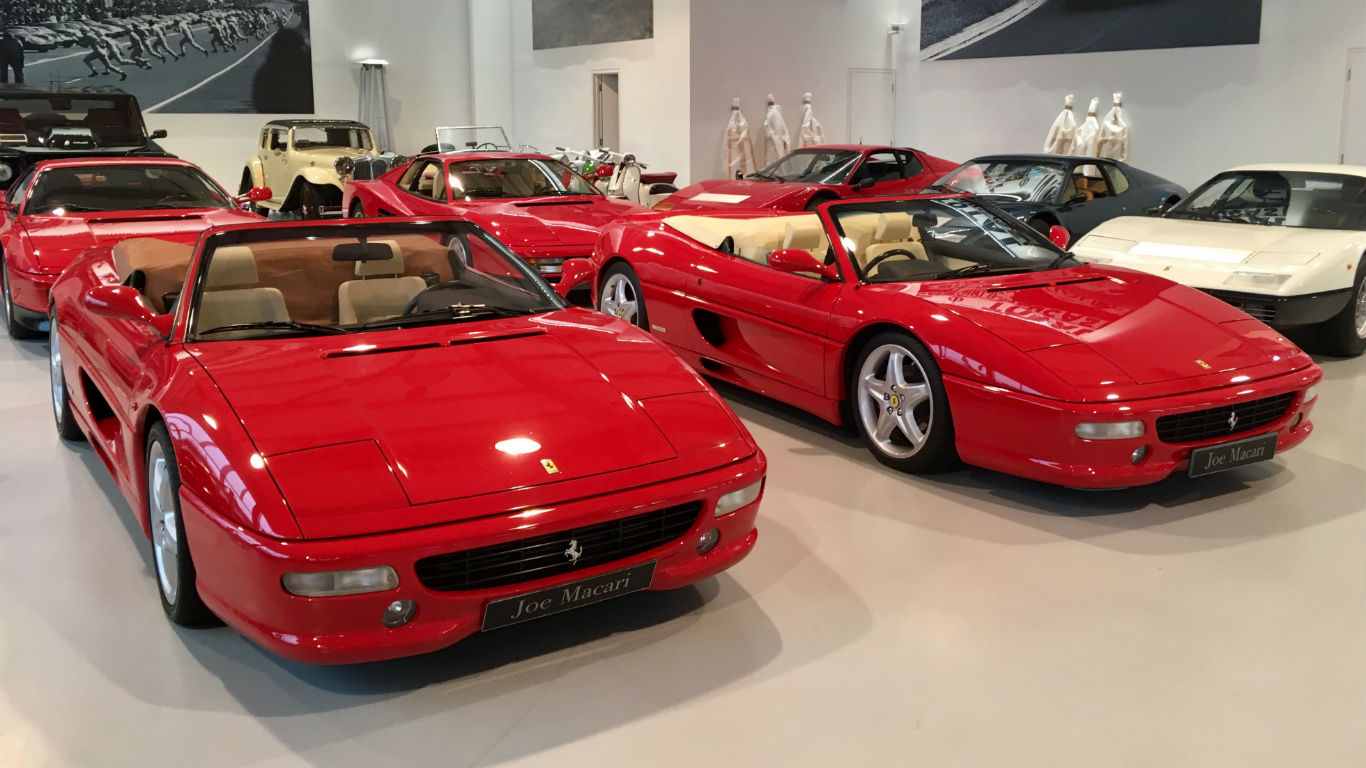 Who doesn’t love a Ferrari? This most iconic of automotive brands has a peerless track-record on the race circuit and a hard-won reputation on the road. They’re among the most desirable and expensive of classic cars, so it’s a rare treat to see so many Ferraris in one place. Join us for a guided tour of Joe Macari, the south London showroom that specialises in exotic Italian cars. 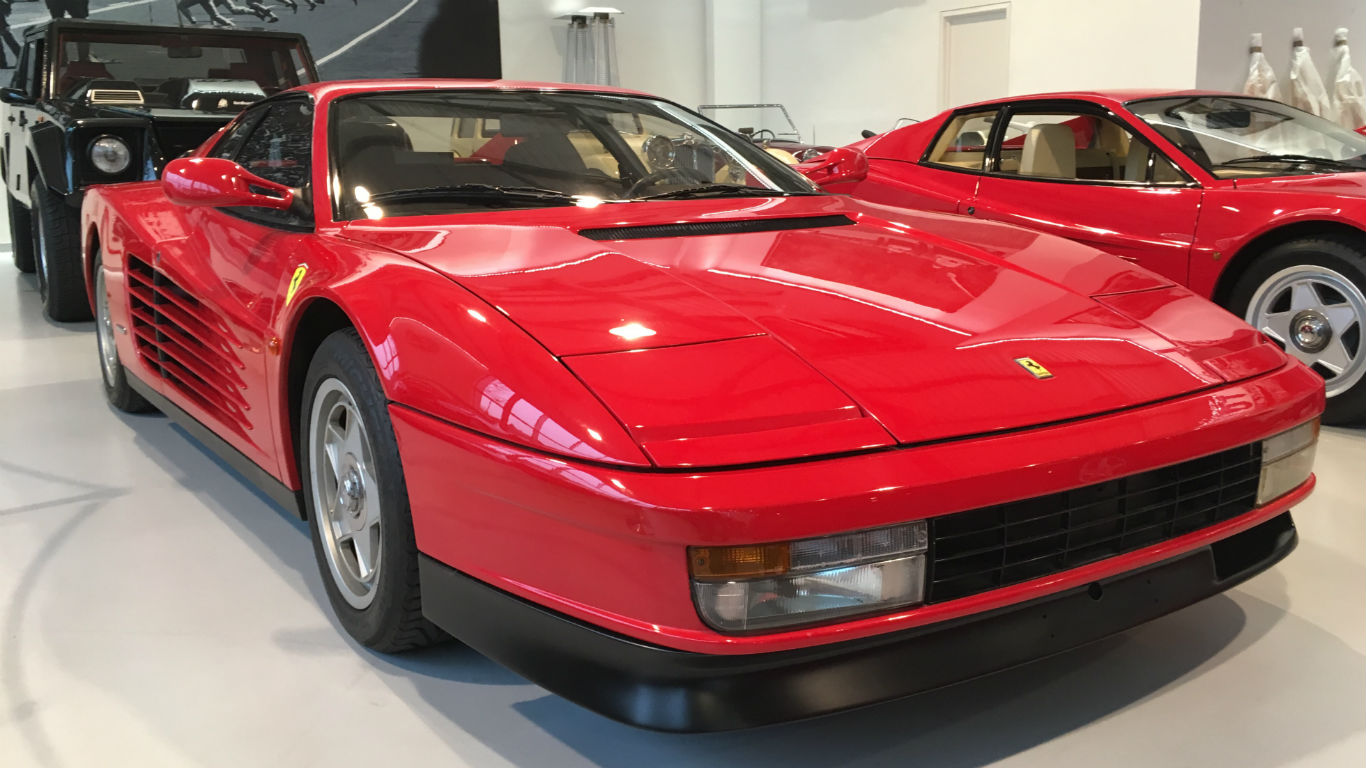 Nothing says ‘1980s’ quite like a Ferrari Testarossa. The star of Miami Vice hits 60mph in 5.2 seconds and a top speed of 180mph. Its signature side strakes feed air to a mid-mounted 4.9-litre flat-12 with red-painted cam covers (hence the Testarossa name, meaning ‘red head’ in Italian). 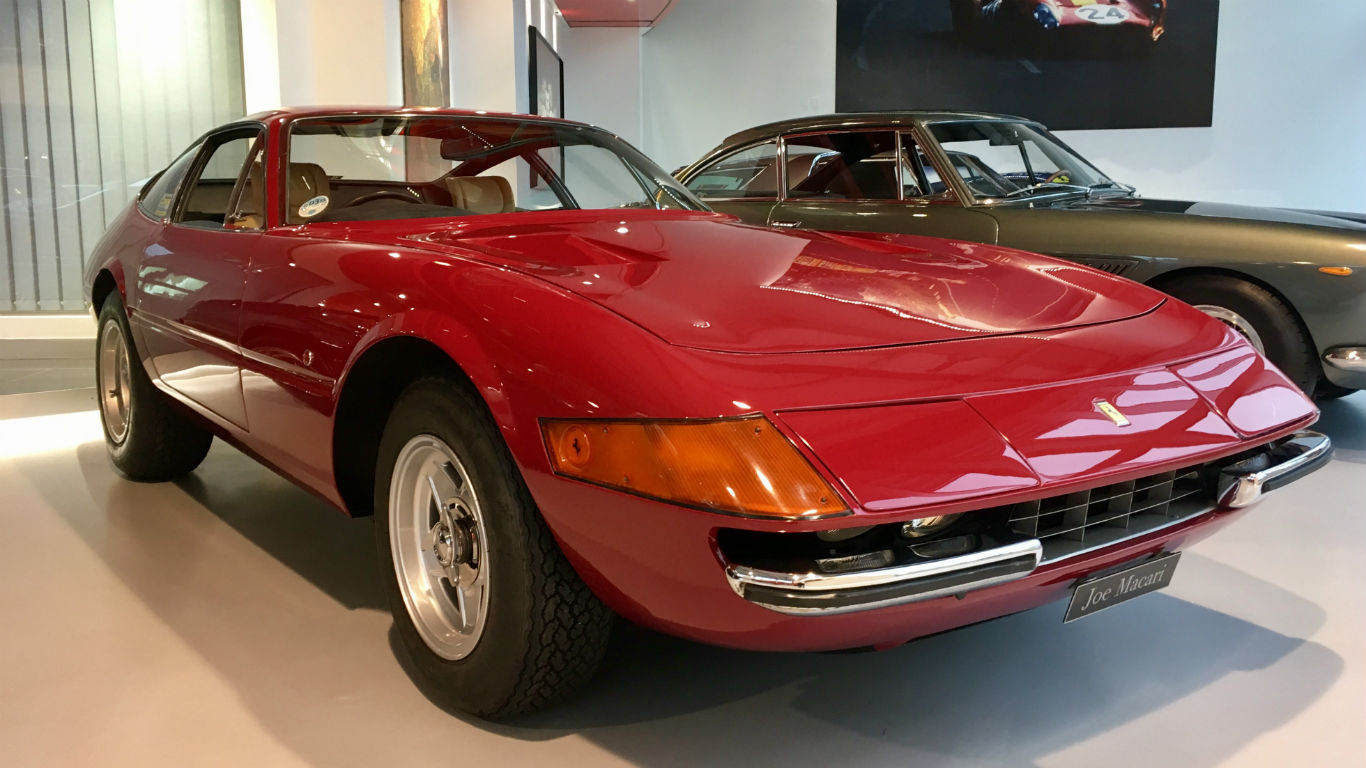 The follow-up to the beautiful 275 GTB was called 365 GTB/4, but its ‘Daytona’ nickname – adopted after Ferrari’s 1-2-3 finish in the 1967 24 Hours of Daytona race – soon stuck. A front-engined V12 grand tourer with four seats and a top speed of 174mph, the Daytona is one of Ferrari’s greatest road cars.

You’ll need to dig deep for this fabulous, Rosso Bordeaux example, which has covered just 42,638 miles since 1972. Priced at £599,950, it was one of three Daytonas in the Joe Macari showroom at the time of our visit. The most expensive, a Ferrari Classiche-certified car, was advertised at £794,950. 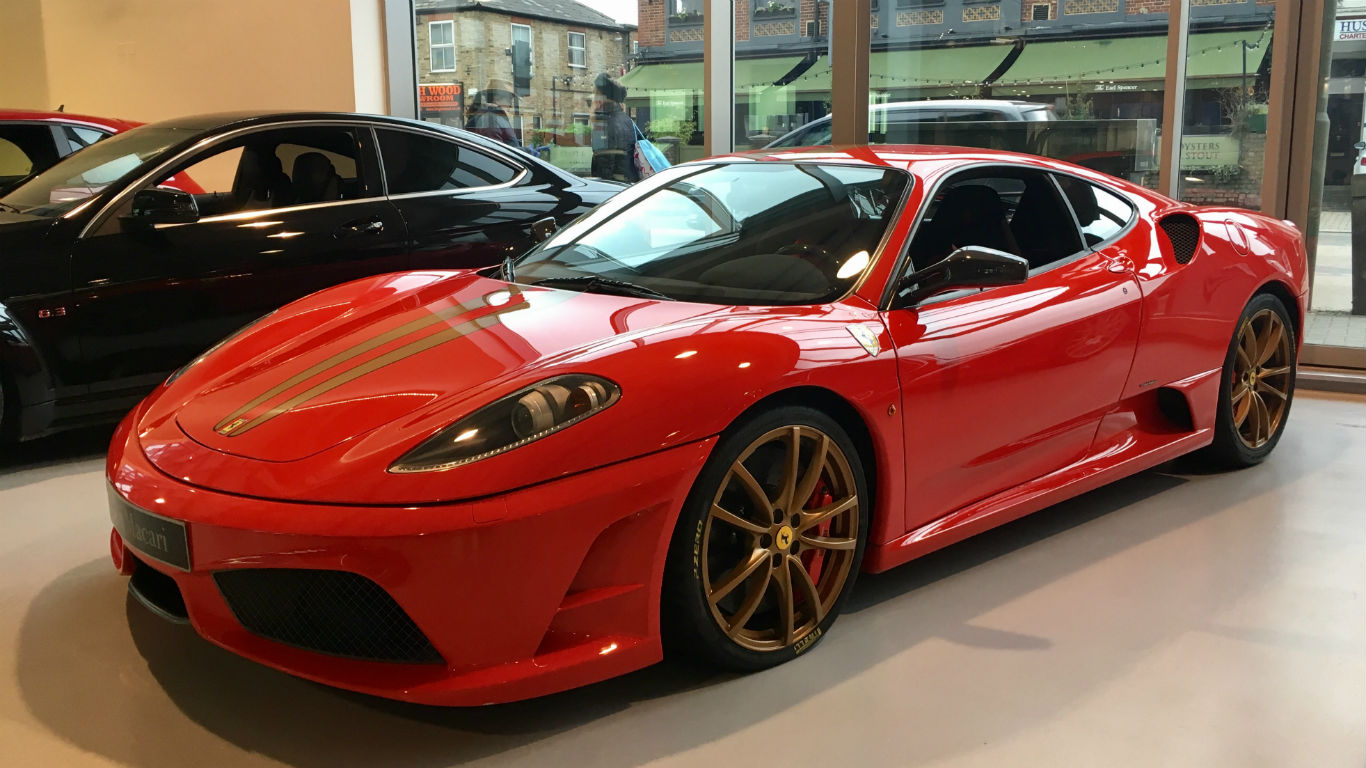 The literal translation of ‘Scuderia’ is ‘stable of horses’, and this special Ferrari has plenty of them – 510 at 8,500rpm, to be exact. The hardcore, track-focused version of the F430 is also 100kg lighter and boasts a ‘Superfast 2’ semi-automatic gearbox, offering paddle-shift changes in just 60 milliseconds.

Did we mention the go-faster stripes? All Scuderias had them, but this car is the only one supplied from new with matching gold stripes and wheels. Other factory extras include Alcantara-trimmed racing seats and three-point harness belts. With a criminally-low 3,200 miles, this ‘Scud’ is priced at £189,950. 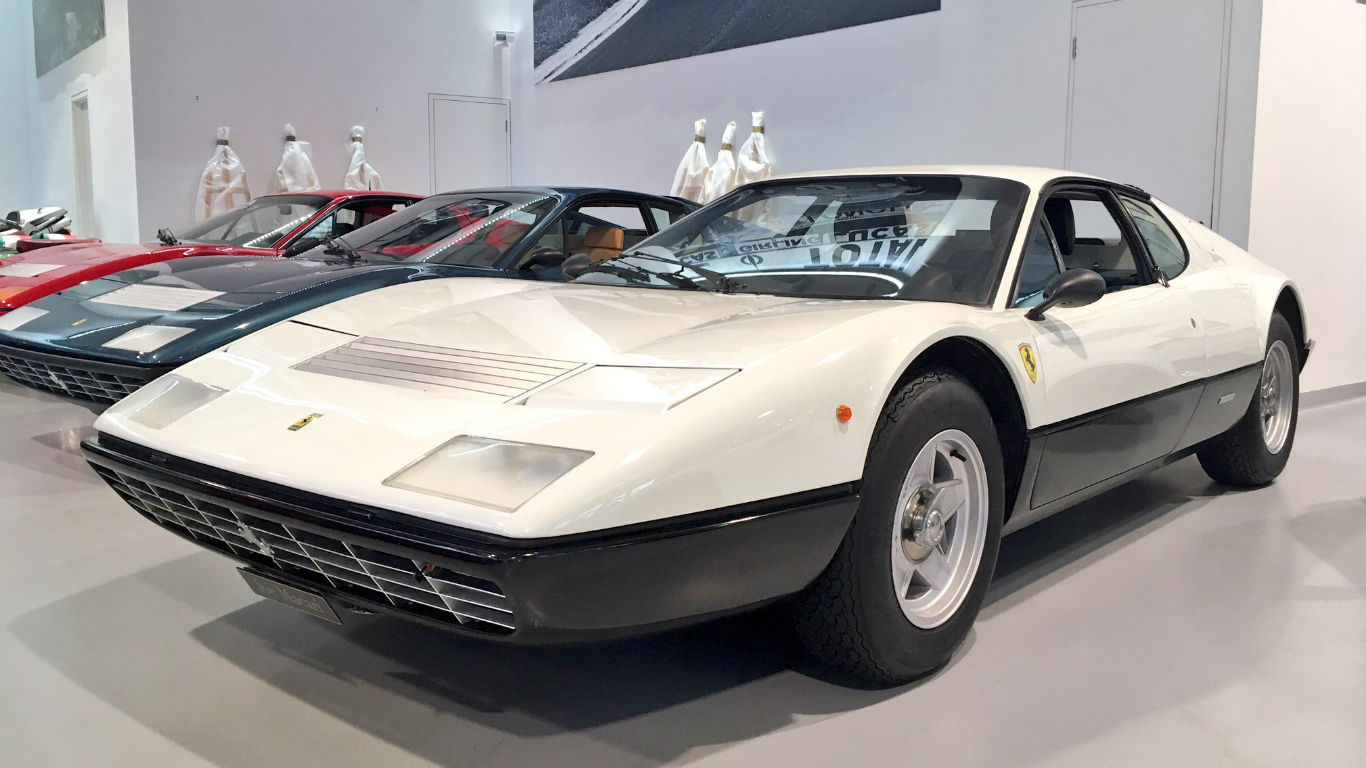 This wonderful Bianco white car – priced at £399,950 – is one of three 365 GT4 BBs Joe Macari had in stock. An impressive line-up considering that just 387 of these early Boxers were made. 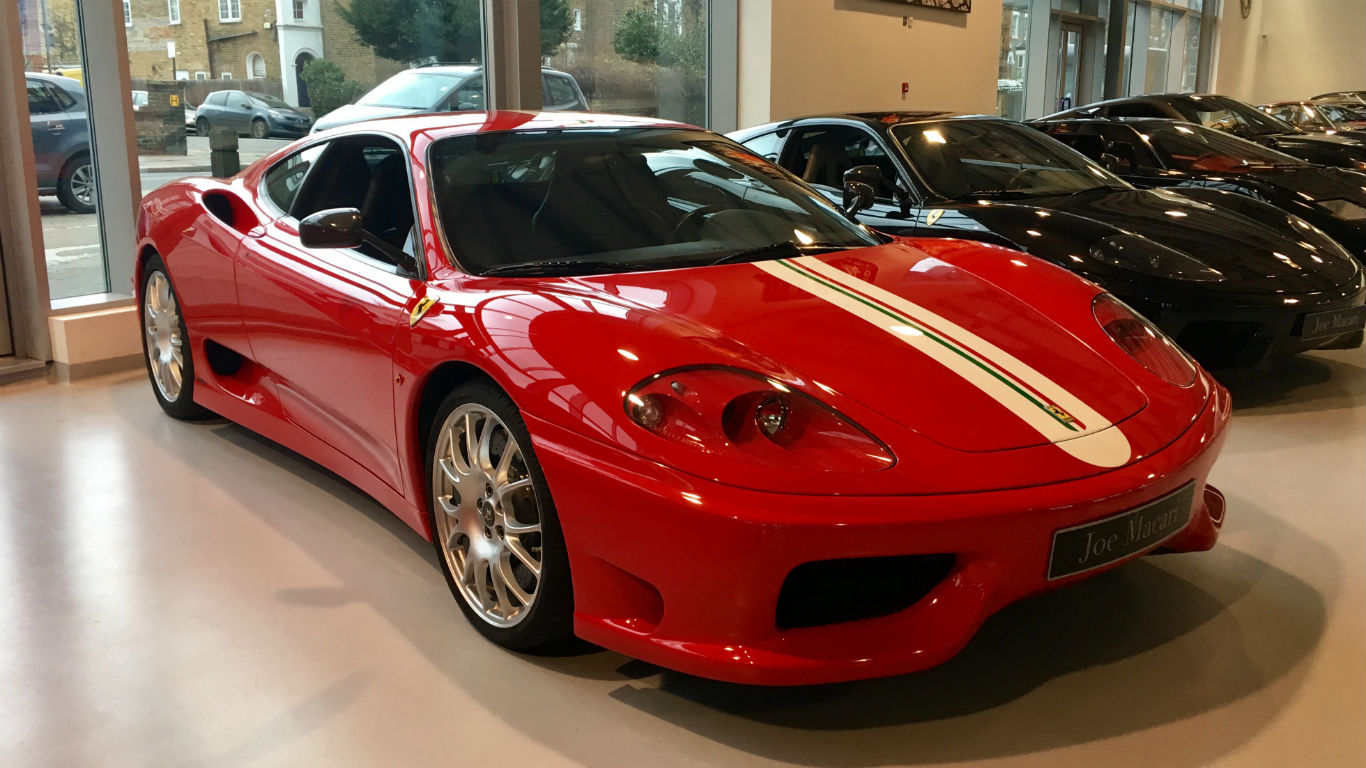 The 360 Challenge Stradale is effectively the forerunner to the 430 Scuderia: a lightweight special with more power, sharper handling and – inevitably – a higher price tag. Inspired by the 360 Modena Challenge racer, it produced 425hp at a heady 8,500rpm. It was also 3.5 seconds quicker around Ferrari’s Fiorano circuit than the standard car.

Finished in trad-Ferrari Rosso Corsa with a ‘Tricolore’ stripe, this 12,650-mile Stradale could hardly look more Italian. At £169,950, it’s a useful £20,000 cheaper than the Scud, too. You could spend the difference on track days and tyres. 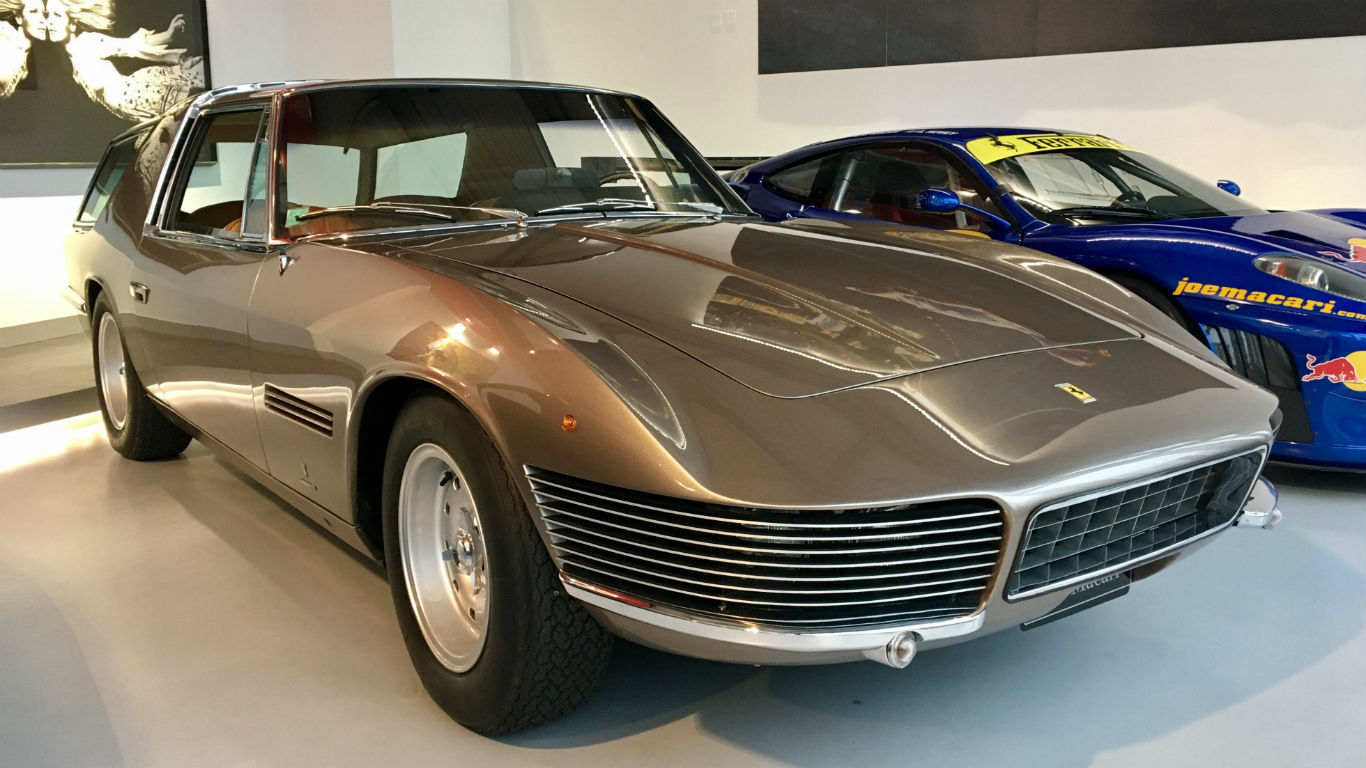 Now for something a bit different. This one-off 330 GT shooting brake was built by legendary Italian coachbuilder, Alfredo Vignale. And before you ask, this was in 1967 – long before his name appeared on tarted-up Ford Fiestas and Mondeos. The car was the dream of Coco Chinetti, son of the American Ferrari importer, and became the star of the 50th Turin Motor Show.

Joe Macari describes the 300hp V12 Vignale as ‘a highly usable and utilitarian Ferrari’, although we can’t imagine anyone using this unique collector’s piece for the tip run. With 13,000 miles on the clock, it’s yours for £694,950. 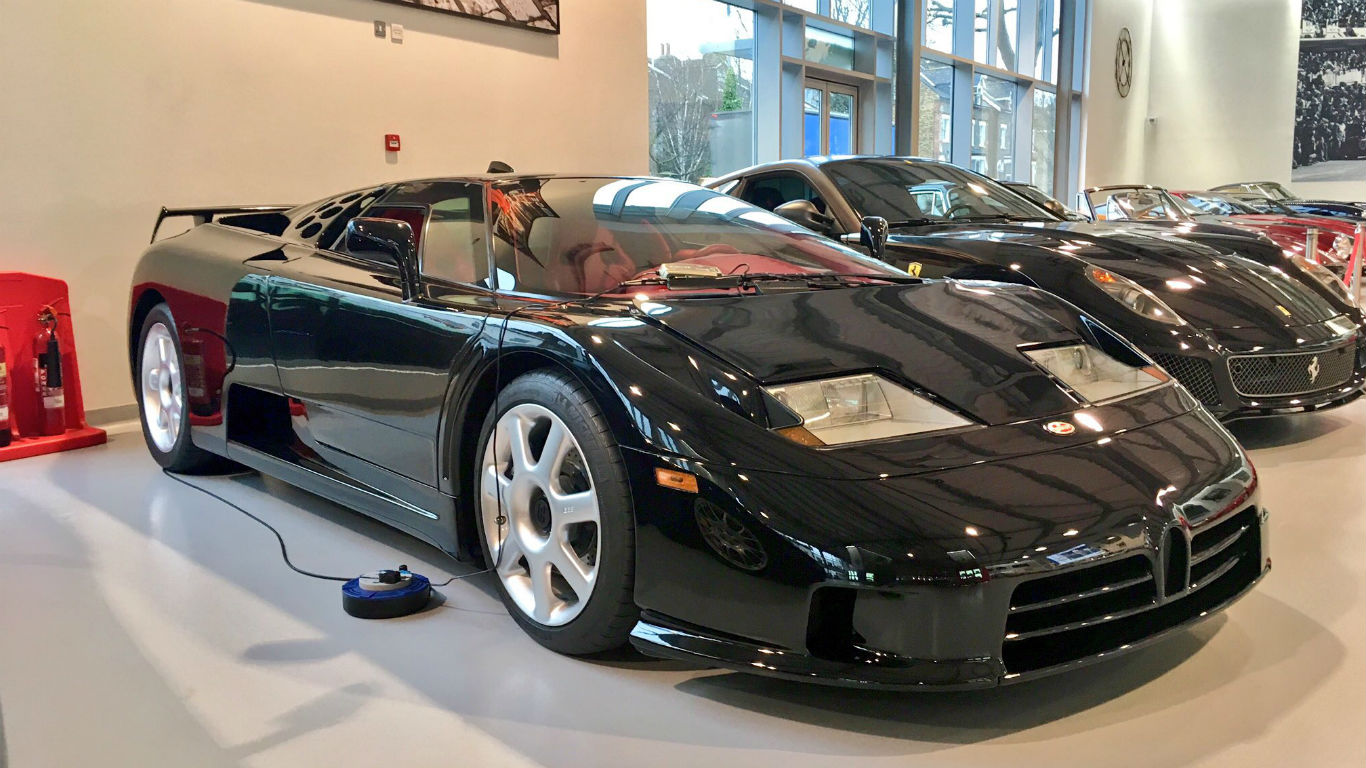 This EB 110 SS is one of a handful of cars built by Germany’s Dauer Sportwagen after Bugatti filed for bankruptcy in 1995. Finished in black with a ‘lipstick red’ interior and just 1,050 miles on the clock, this 90s poster car is barely run-in. The price? A wallet-wilting £894,950. 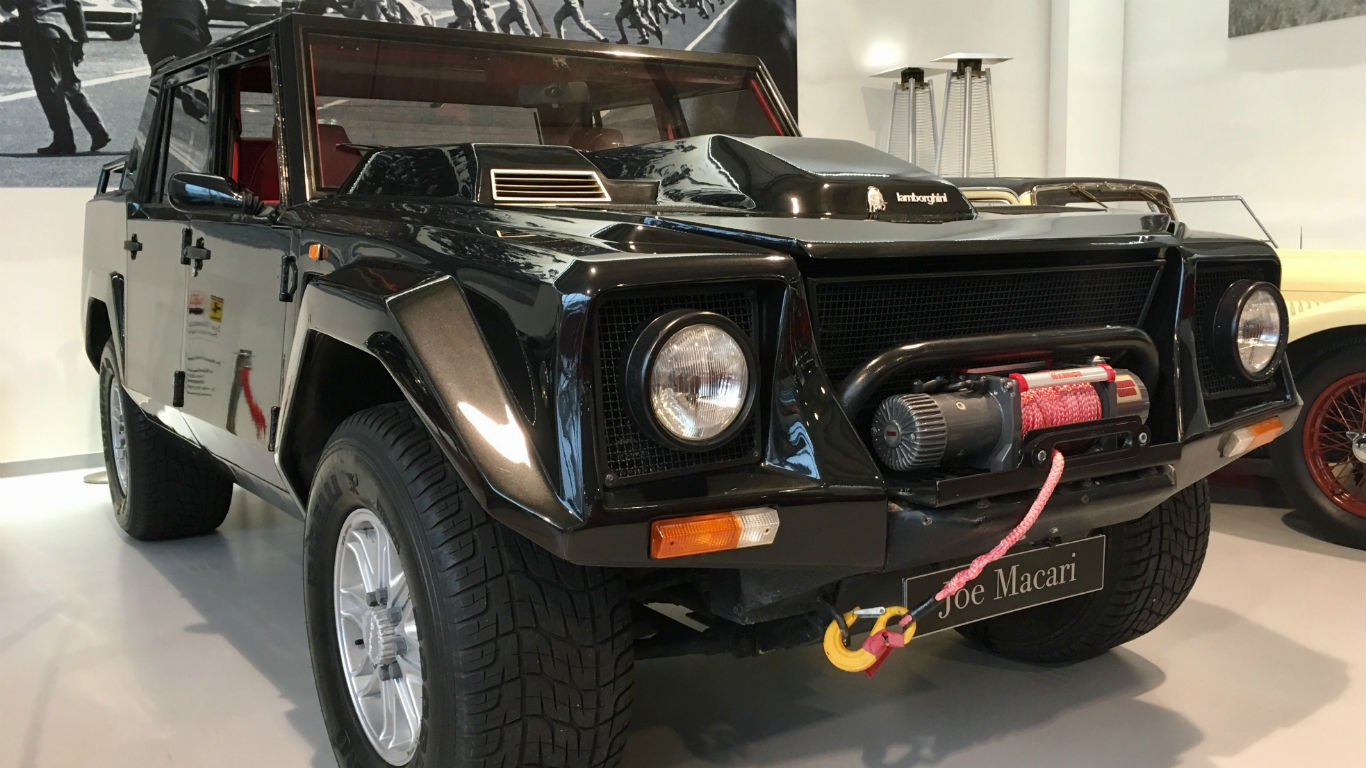 The LM002 laughs in the face of crossover SUVs. If the Nissan Qashqai is a posturing baboon, the ‘Rambo Lambo’ is King Kong. Powered by the mighty V12 from the Lamborghini Countach, it was originally designed for military use. Just 301 were made, and rally versions boasted up to 600hp.

Tucked menacingly in the corner of Joe Macari’s showroom, this Lambo isn’t for sale. However, the two LM002s we found in the classifieds at the time of writing were both priced north of £200k. This, or a new Huracan? 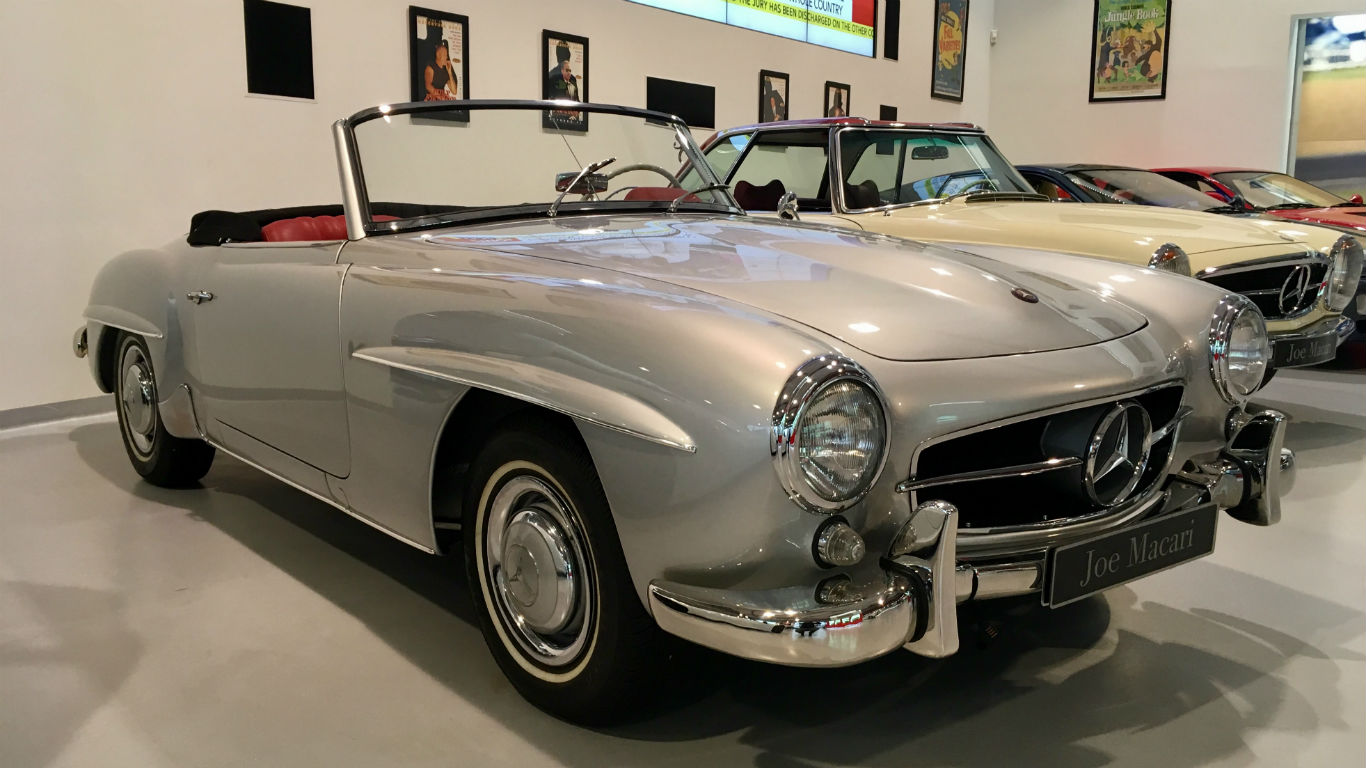 If you prefer to simply turn heads, rather than terrify small children, the Mercedes-Benz 190SL is more your style. And what style. Few cars of any vintage can match the original SL’s delicate, chrome-embellished beauty. Who cares that its 1.9-litre, four-cylinder engine makes just 105hp?

In the classic colour combination of silver with a red interior, this left-hand-drive SL has covered 5,500 miles since restoration. Priced at £149,950, it looks decent value compared to the £1million-plus you’ll pay for a 300SL Gullwing. 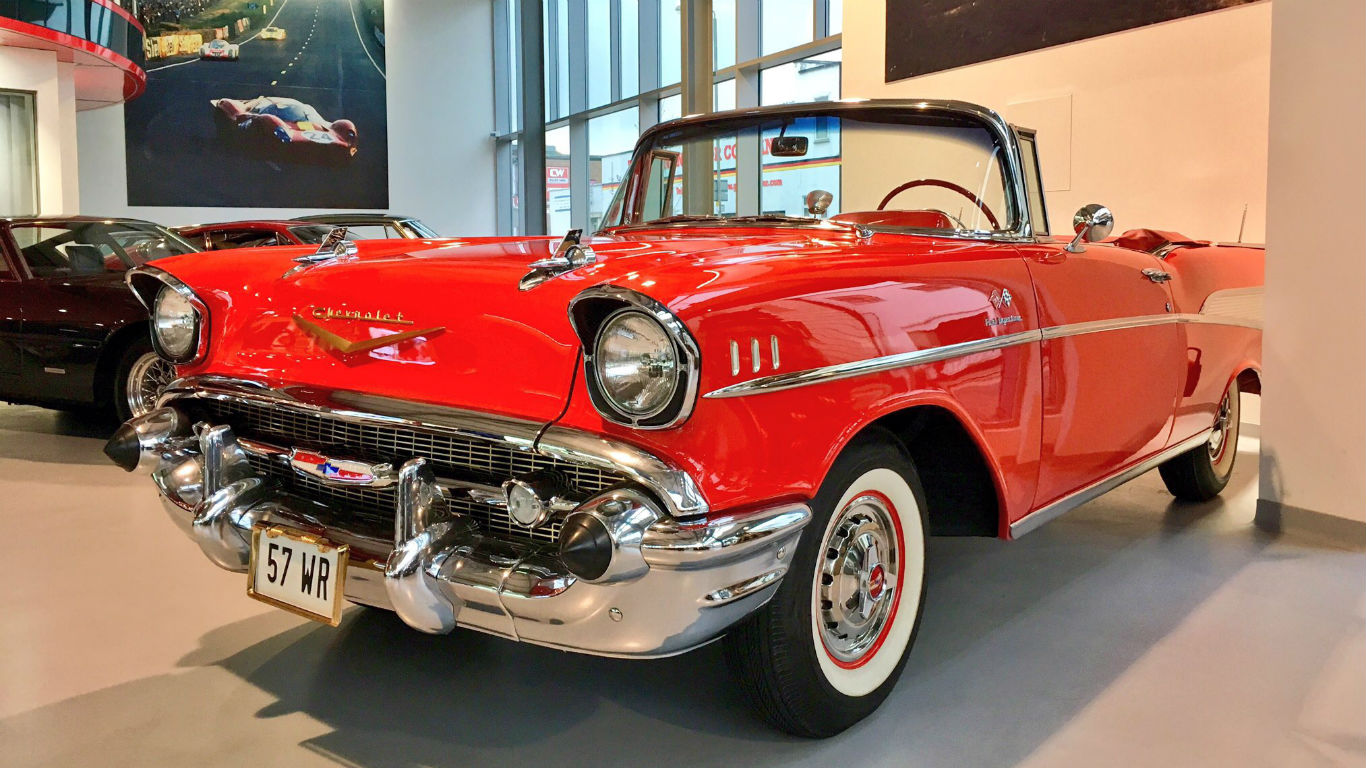 Nothing encapsulates the naive optimism of 1950s America quite like its cars. Chevrolet described the Bel Air as: “Sweet, Smooth, and Sassy! Going places in a glamorous new way” – and the US public clearly agreed, snapping up 702,220 examples in 1957. Compared to mainstream British cars of the time, such as the Austin A40, the Chevy was on another planet.

A price tag of £119,950 might seem steep for a classic built in such large numbers, but this is a relatively rare Bel Air convertible, and one of a small number of cars with ‘Rochester Ramjet’ fuel injection. If anything can make America great again, this is it. 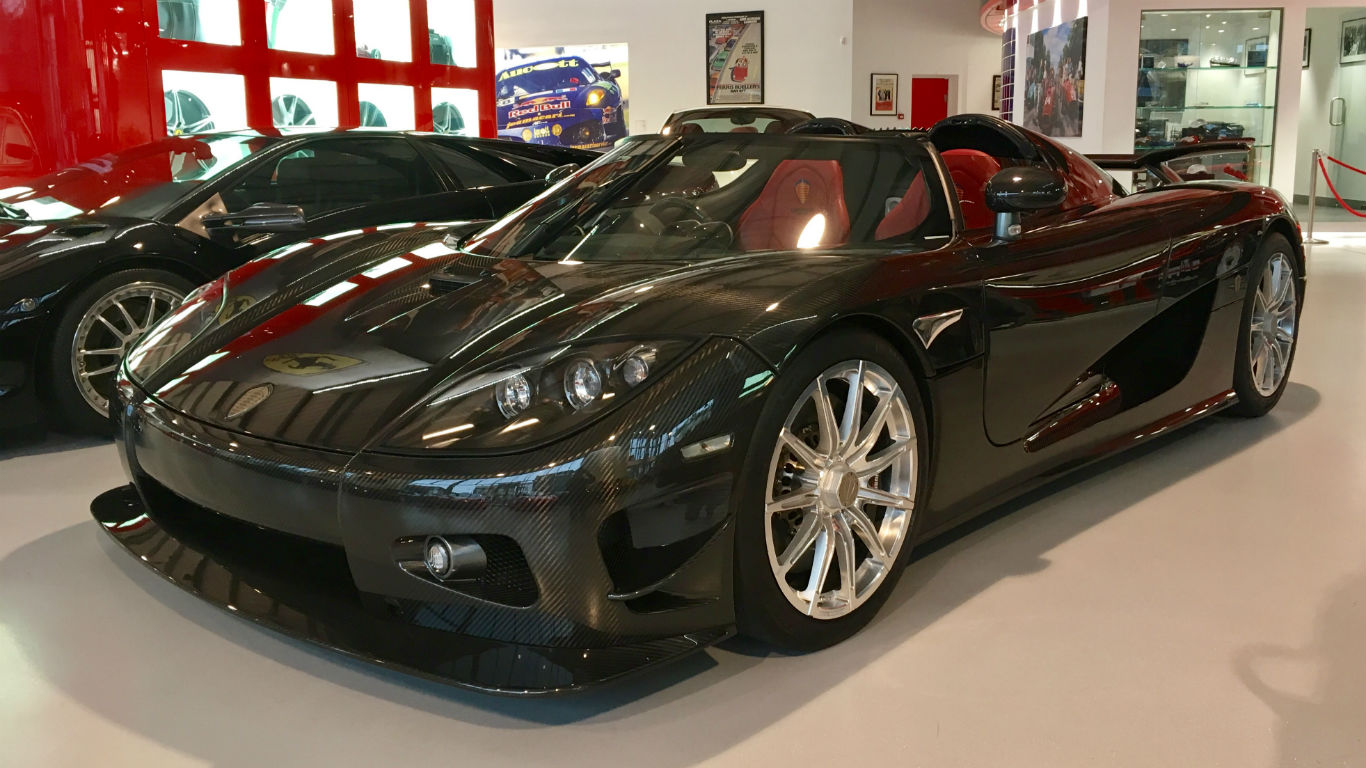 Jeremy Clarkson still can’t spell its name, but Swedish-born Koenigsegg has been quietly battling the supercar establishment since 2002. That said, with an 1,018hp twin-supercharged V8, we suspect this CCXR Edition is anything but quiet.

Wearing naked carbon fibre bodywork, a removable targa roof and a lofty rear wing, the CCXR isn’t shy about its 250mph performance. A 0-62mph time of 2.9 seconds isn’t too shabby either. The £824,950 price reflects the car’s rarity – just six ‘Edition’ models were made. 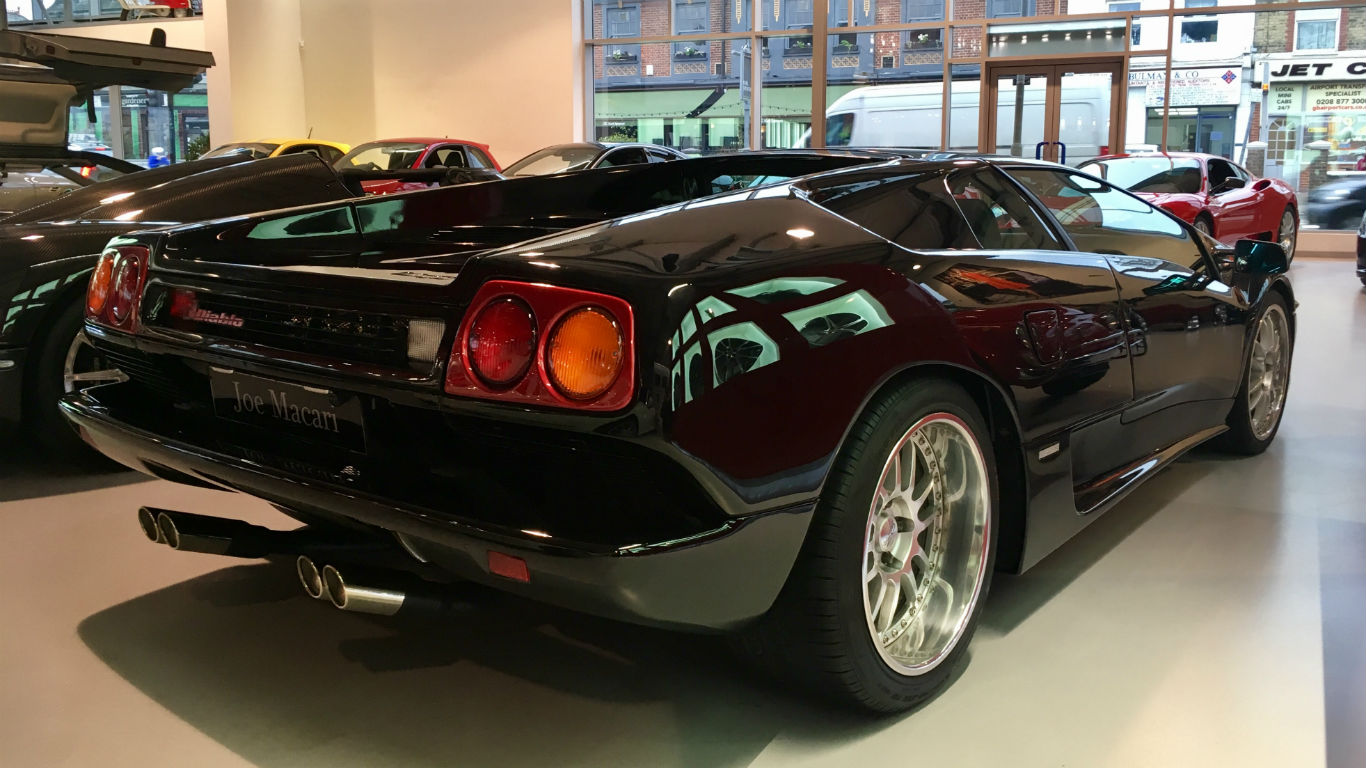 A more old-school supercar comes in the shape of this Lamborghini Diablo. The long-awaited successor to the Countach arrived in 1990 and followed the same basic formula: a mid-mounted V12, two seats, scissor doors and styling that stops traffic. With 485hp, the ‘Devil’ hits 62mph in 4.5 seconds. Later VT versions, with four-wheel-drive, were even quicker.

You’ll need £149,950 for this 1993, 6,115-mile Diablo, which looks fantastic in black with a black leather interior. We’d be tempted to replace those aftermarket OZ Racing alloys, though. 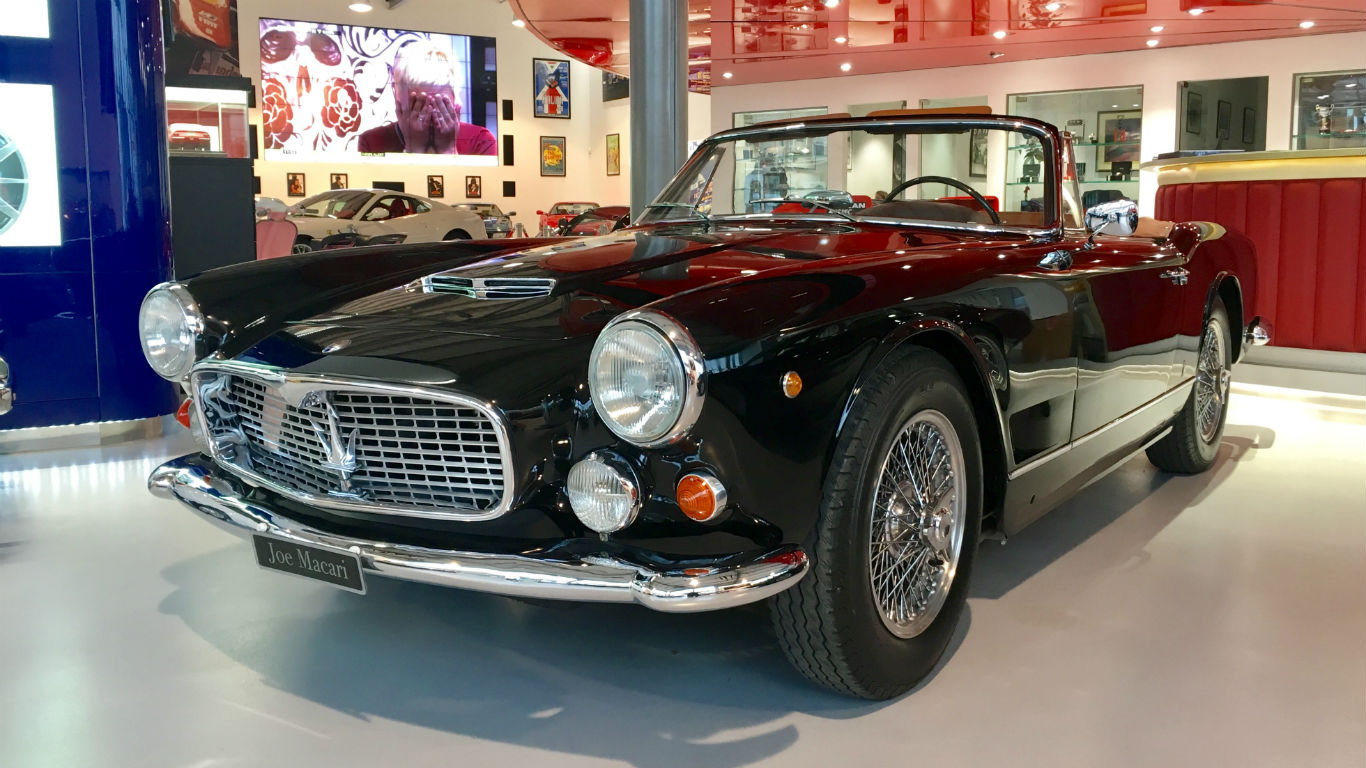 An Italian exotic that makes even most Ferraris look plain, this convertible Maserati 3500 GT is the second car in our round-up bodied by Vignale. Power came from a 3.5-litre inline six, driving through a four-speed manual gearbox and optional limited-slip differential.

Of the 244 Spyders built, nine were pre-production cars – as seen here. Key differences include a lower, narrower body, smaller rear lights and fewer gauges on the dashboard. This immaculate 39,000-mile car is offered at £874,950. 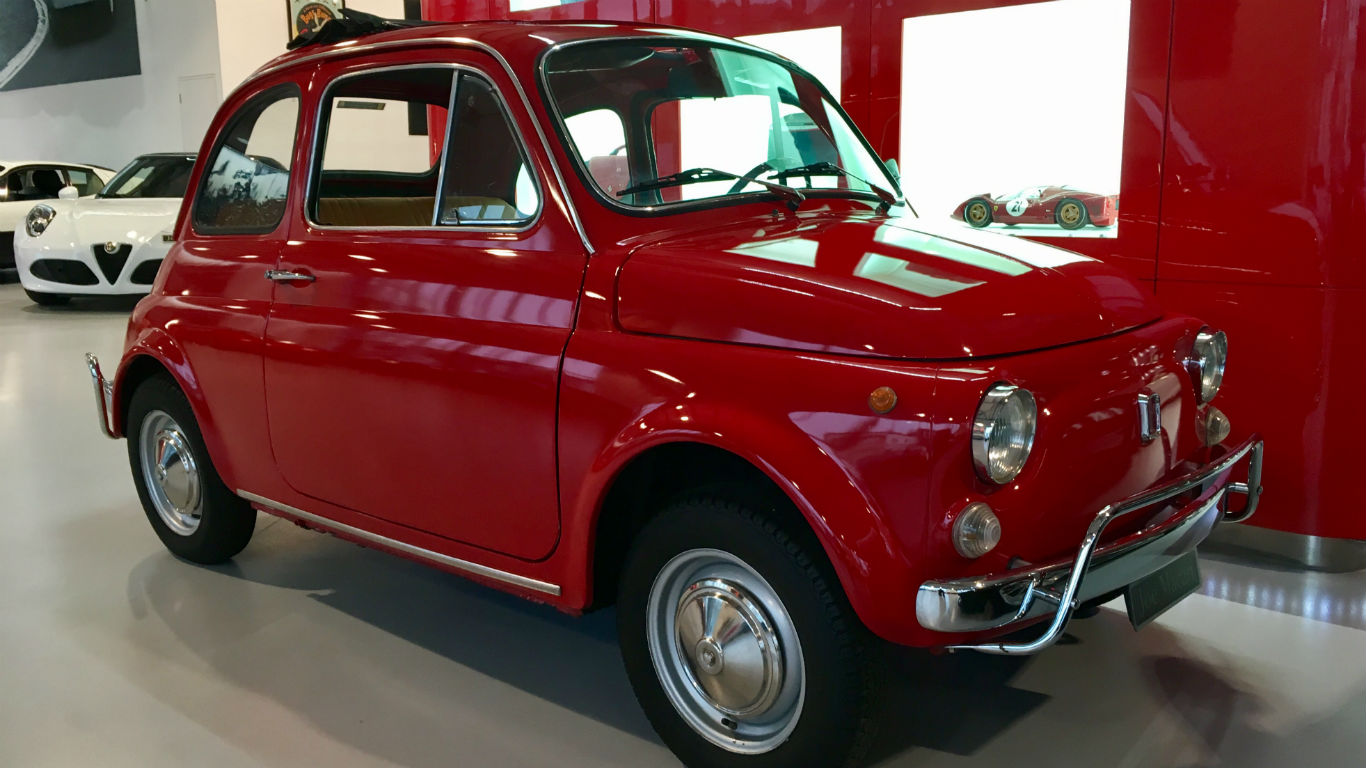 We finish with something quintessentially Italian, but rather less expensive. The original 1957-1975 Fiat Cinquecento is an iconic ‘car of the people’ to rival the Mini and Volkswagen Beetle. Indeed, its legacy lives on the current, retro-styled 500, and the copycat models in Fiat’s range.

Beautifully restored, this 1969 500 L spent much of its life in Italy. Its air-cooled, two-cylinder engine is no match for the adjacent Diablo’s V12, but we’d wager both cars would be equally quick (slow?) through London traffic. Bellissimo!