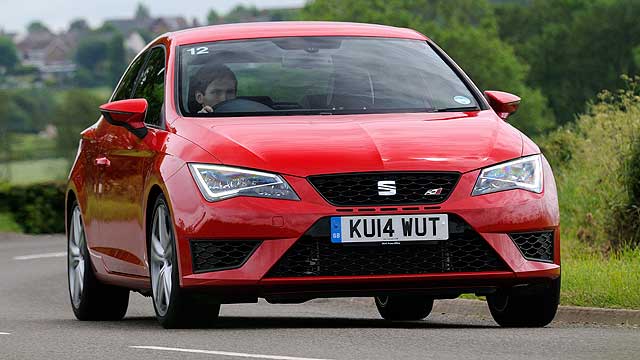 The optional performance pack is being launched to ensure its 7m 58.4s second-fastest front-drive car Nordschleife lap time is valid, and is being offered on both three-door and five-door Cupra 280 variants.

There are no changes to the powertrain, so the standard 280hp output is retained. Instead, the Sub8 pack focused on wheels, tyres and minor styling mods. It includes:

The side skirts? Purely there to add a bit of on-road differentiation (and some kudos amongst SEAT enthusiasts).

SEAT revealed the lap time for its sub-8 minute Nurburgring Nordschleife run at the 2014 Geneva Motor Show this year, to great fanfare. The impact has since been dulled now that Renault has taken the record back, but SEAT’s counterpunch is value. The record-breaking Megane Renaultsport 275 Trophy-R costs £36,430; a SEAT Leon Cupra 280 SC Sub8 Performance Pack is yours from £29,055…