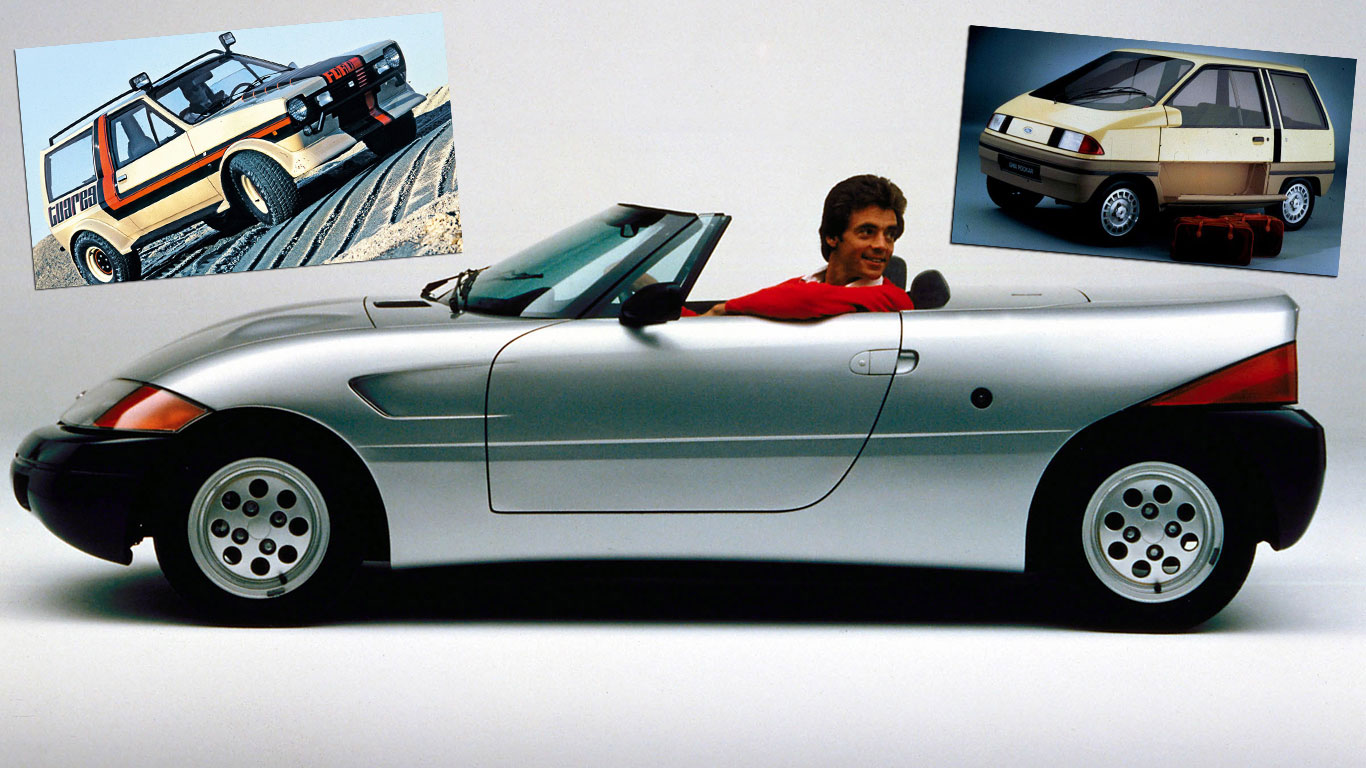 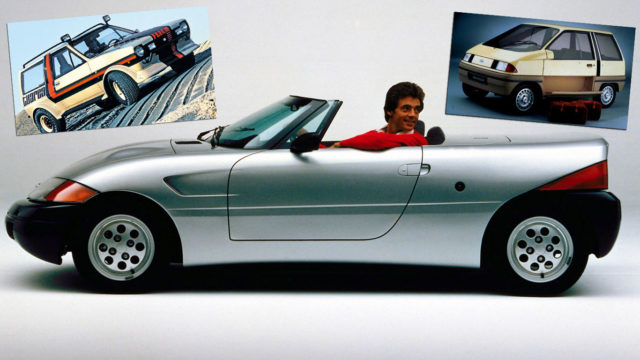 The eight-generation model of Britain’s best-selling car has been revealed. While the new model is set to go on sale in 2017 – with highlights including a posh Vignale model and a jacked-up Active crossover – Ford has a backlog of Fiesta concept cars that will never see production. Here are a few highlights. 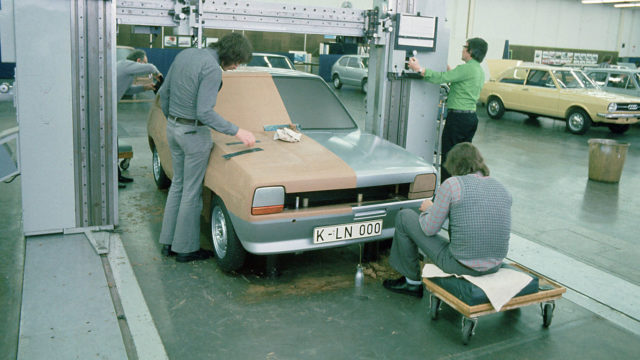 It all started with this: a clay model of the Ford Fiesta. Developed under the project name of Bobcat, the Fiesta owed much to the Ford Ghia Wolf concept car of 1972. 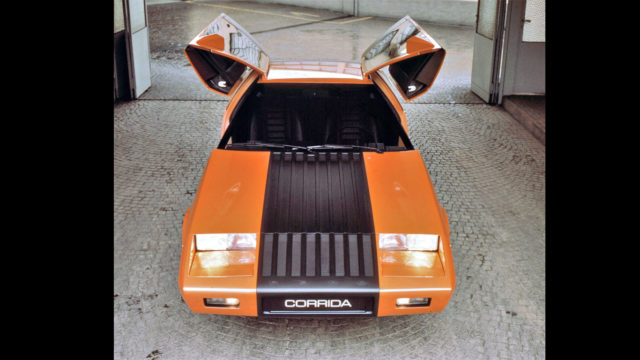 It didn’t take long for the Fiesta-based concepts to appear. The striking Ford Ghia Corrida concept was unveiled at the 1976 Turin Auto Show and – as a small coupe – was like a 1970s version of the Ford Puma, also based on the Fiesta. But the Puma wasn’t blessed with hydraulically-powered gullwing doors. 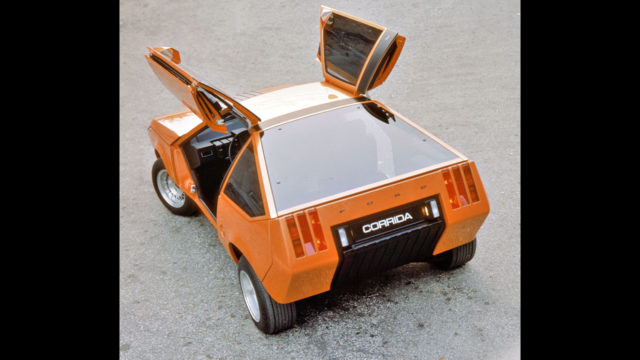 The Corrida – which is Spanish for ‘bullfight’ – also featured headlight flaps to make the car more aerodynamic, as well as a bumper-hinged tailgate. Sadly, it never made it into production, but it laid the foundations for four decades of Fiesta-based concept cars. 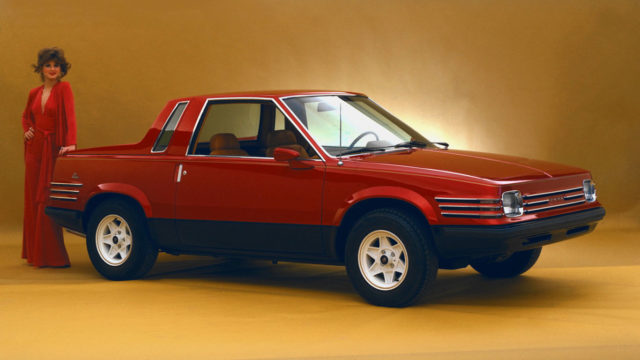 It’s like a Citroen Pluriel for a different generation. Why have one car when you can have four? The Ford Prima concept of 1976 could be converted into a pickup, coupe, estate car or two-door saloon. Ghia worked with the Ford Design Studio in Dearborn to create this oddball. 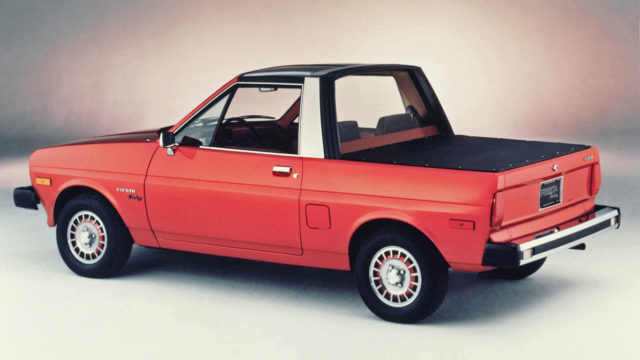 ‘Let me be your fantasy,’ sang Baby D in 1992. We’re not sure if this was a reference to the Ford Fiesta Fantasy of 1978, although we think the breakbeat hardcore music group would appreciate its versatility. The Fantasy concept was part coupe, part pickup and part wagon. Ford of America wanted it to lower the average mpg across its fleet. 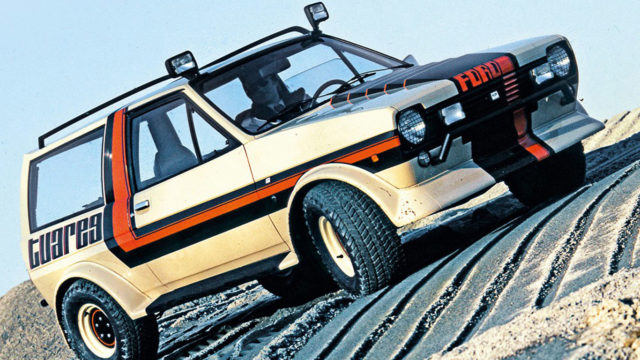 Surely the greatest Ford Fiesta never made? Not to confused with the oversized and over-styled Volkswagen Touareg, the little Tuareg of 1979 was cool in a way the Ford EcoSport can only dream of. The floor pan was unchanged, but Ford extended the roof line at the rear to create an off-road shooting brake with more attitude than John McEnroe. Oh, Ford, why wasn’t this given the green light? 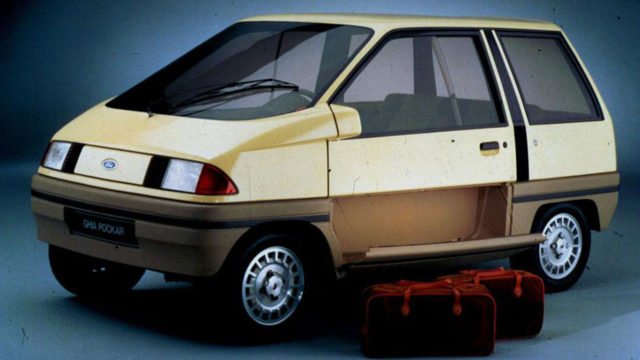 More fruits of Ghia’s labour here, with the delightful Pockar concept of 1980. The Pockar – pocket-sized, car, Pock-car, geddit? – featured a pair of matching suitcases, hidden away in each door. Inside, the luggage compartments doubled up as a pair of armrests. Neat. 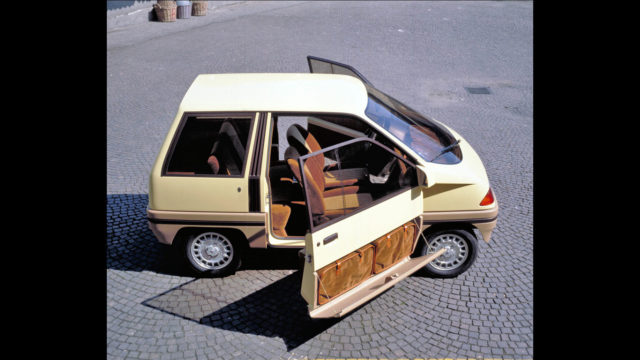 Meanwhile there’s ample space for four adults, while the rear seats could fold flat to create a pocket-sized estate car. The Ford Fiesta was proving itself to a versatile little thing. 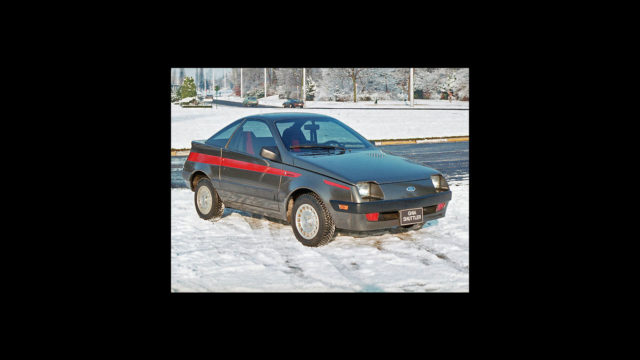 The Ford Shuttler concept of 1981 looks like it has driven straight from the front cover of the box for an Atari video game. The red accent running the entire length of the wedge-tastic Shuttler was good for an additional 5hp. We think. 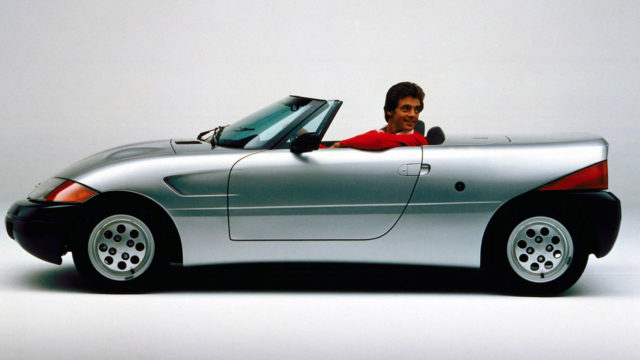 It’s sitting on a set of ‘pepperpot’ alloy wheels, so the link to the Ford Fiesta XR2 is plain to see. Barchetta means ‘little boat’ in Italian, and was the name used by Fiat when it launched its own pint-sized roadster. The Italian Barchetta was based on the Mk1 Fiat Punto. 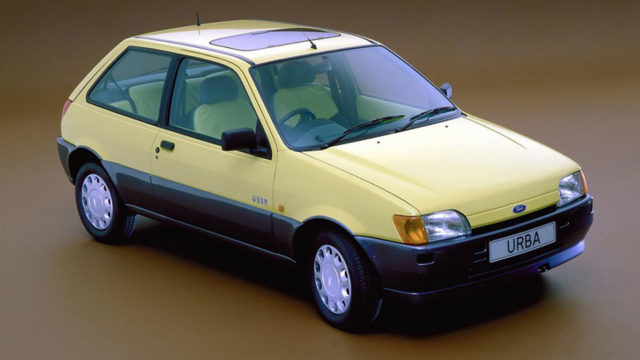 What you can’t see from the photo is the fact that the Ford Fiesta Urba featured two doors on one side and a single door on the other. It was designed as a kind of city shopper car, featuring a fridge in the boot, built-in garage door openers and parking sensors. And yellow. Lots of yellow. 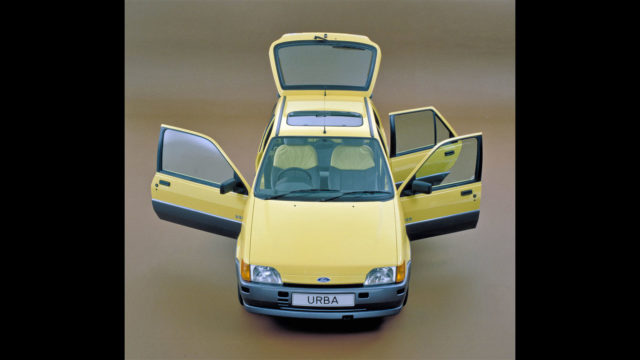 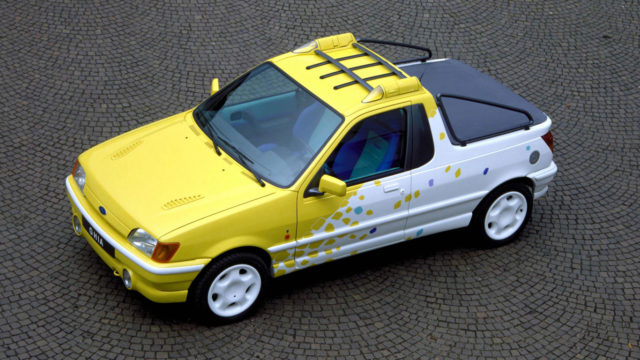 In 1990, some bosses at Ford were enjoying lunch in the park when a recently-launched Suzuki Vitara convertible drove past. Muttering something along the lines of “we’ve gotta get ourselves one of those,” they set about turning a Fiesta into a “dynamic pick-up… geared to sports-minded drivers.” At least, that’s how it played out in our heads. 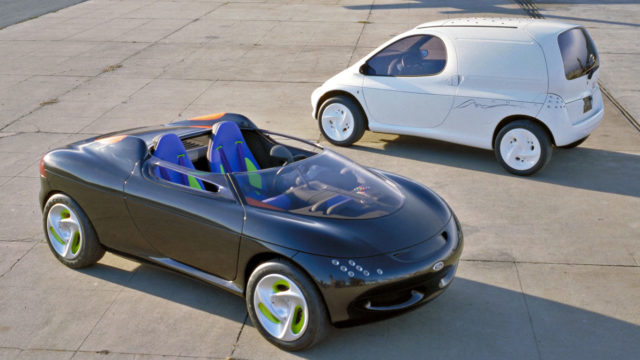 Not to be confused with the puppets of Big Breakfast fame, the Fiesta Zig was a two-seat barchetta and the Fiesta Zag was a small van. They were designed to show the versatility of a single platform, with no strings attached. 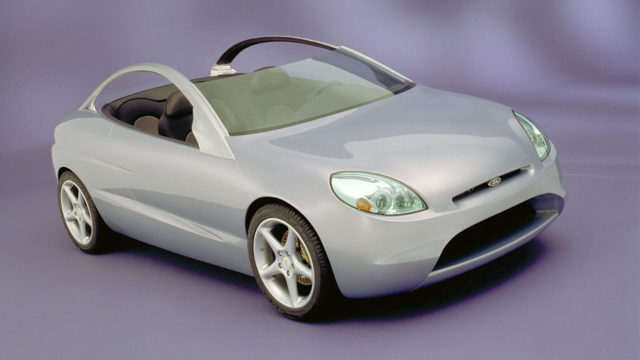 The Ford Lynx concept was built in just eight weeks – a cabriolet based on the Fiesta and unveiled at the 1996 Geneva Motor Show. Although the engine was the familiar 16-valve Zetec unit, the proposed roof used breathable Gore-Tex fabric. It doesn’t take Sherlock Holmes levels of investigative work to conclude that the Lynx was a strong influence on the Puma. 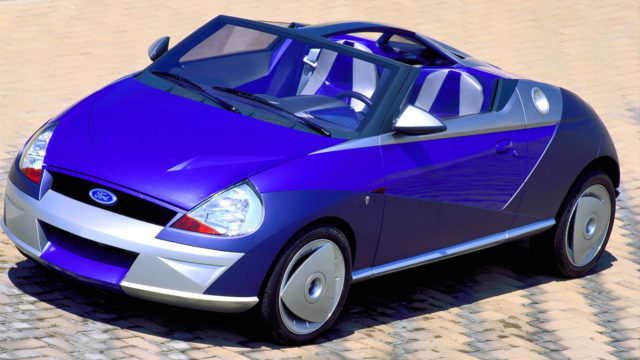 If the Ford Saetta concept of 1996 looks familiar, it’s because it became the Ford Streetka. For sure, the production version was far less dramatic, but the influence is clear to see. 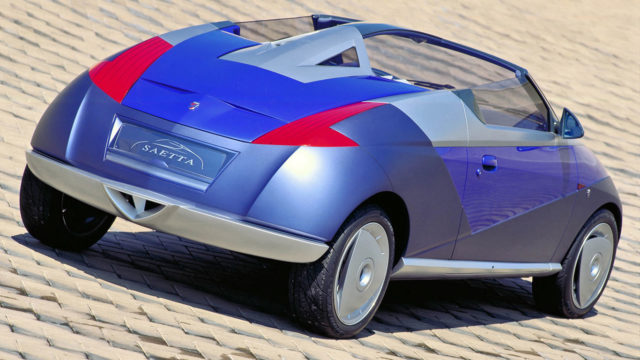 Highlights included a central arch connecting the windscreen with the rear end, plus detachable panels that formed the roof. Once again, Ford has Ghia to thank for this conceptual gem. 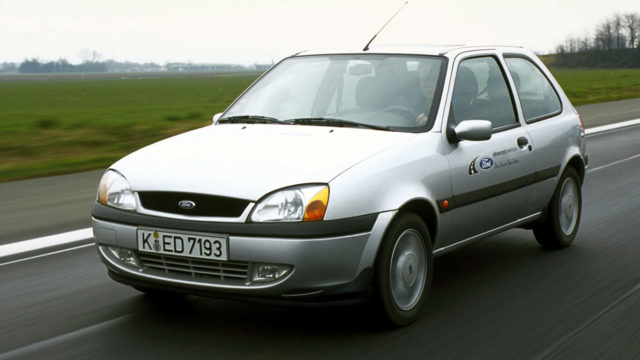 DISI stands for Direct Injection Spark Ignition – a new powertrain trialled by Ford. In short, it was a three-cylinder turbocharged 1.0-litre petrol engine with 110 hp, but 15-30% more efficient than a 1.8-litre engine. It was too expensive to make production, but it paved the way for the modern 1.0 EcoBoost engine. 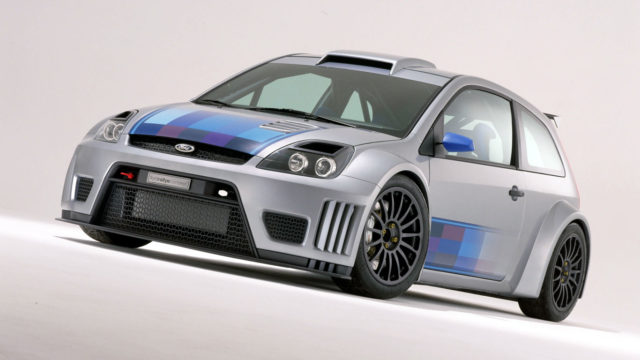 The genesis for the Ford Fiesta rally car: the Rallye Concept of 2002 looked like it had driven straight out of a PlayStation game. It’s good, but it’s not our favourite Fiesta concept of the new millennium… 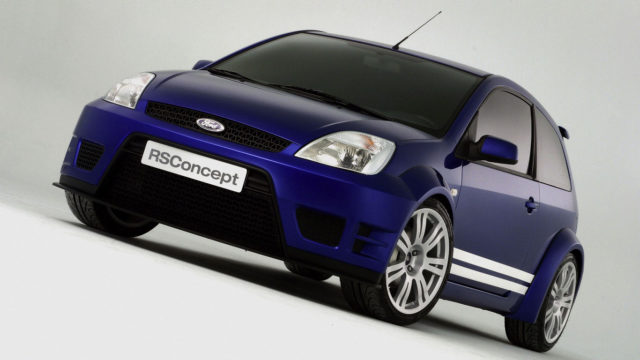 Because that honour belongs to the Ford Fiesta RS Concept of 2004. Inspired by the Rallye Concept, it featured huge arches, massive rims and twin racing stripes – just three essential components required for any self-respecting RS car. 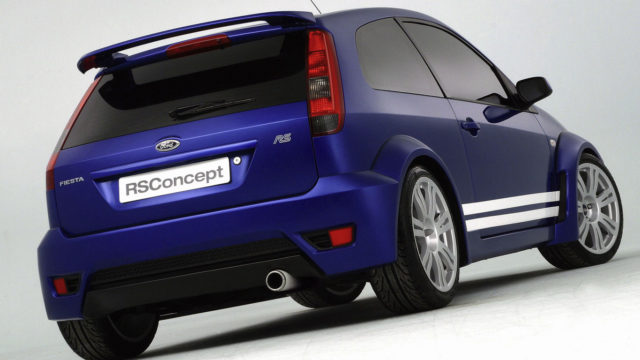 It looked production-ready, right down to the showroom-winning interior, which meant we all got rather excited about the prospect of a Fiesta RS. Sadly, it never made it to production, quite simply because Ford’s calculator kept saying no. Over a decade on, we still mourn this missed opportunity. 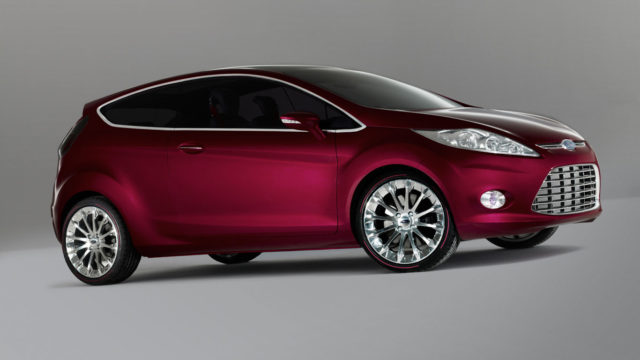 Ford claims the inspiration “came in part from mobile phone design”. Which means the Fiesta Verve of 2007 will often run out of juice just when you need it and be rendered useless if you get it wet. On the plus side, there was no headphone jack, so it was quite the pioneer. 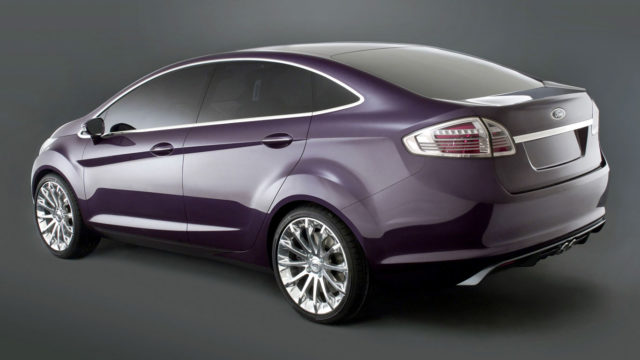 Ford also created an ugly compact saloon version. To borrow a line from Richard Ashcroft, the Verve saloon was bitter, the Verve hatch was sweet. In both cases, they previewed the latest Fiesta. 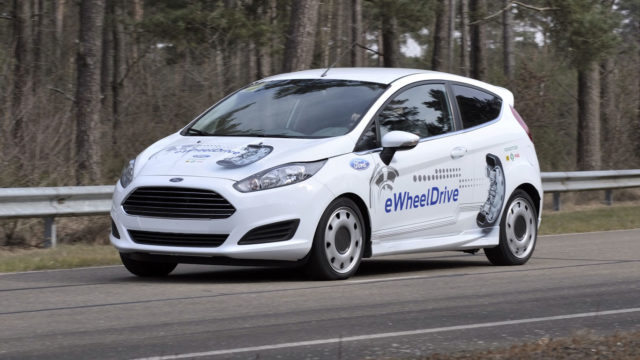 We conclude with the Ford Fiesta eWheeldrive of 2013. Powered by independent electric motors in each of the rear wheels, the eWheeldrive offers more space than a conventional petrol or electric vehicle. Ford claims the eWheeldrive could even move sideways into parking spaces.