2016 was a record-breaking year for new car registrations – but which are the cars that UK motorists are buying? We've got the top 20 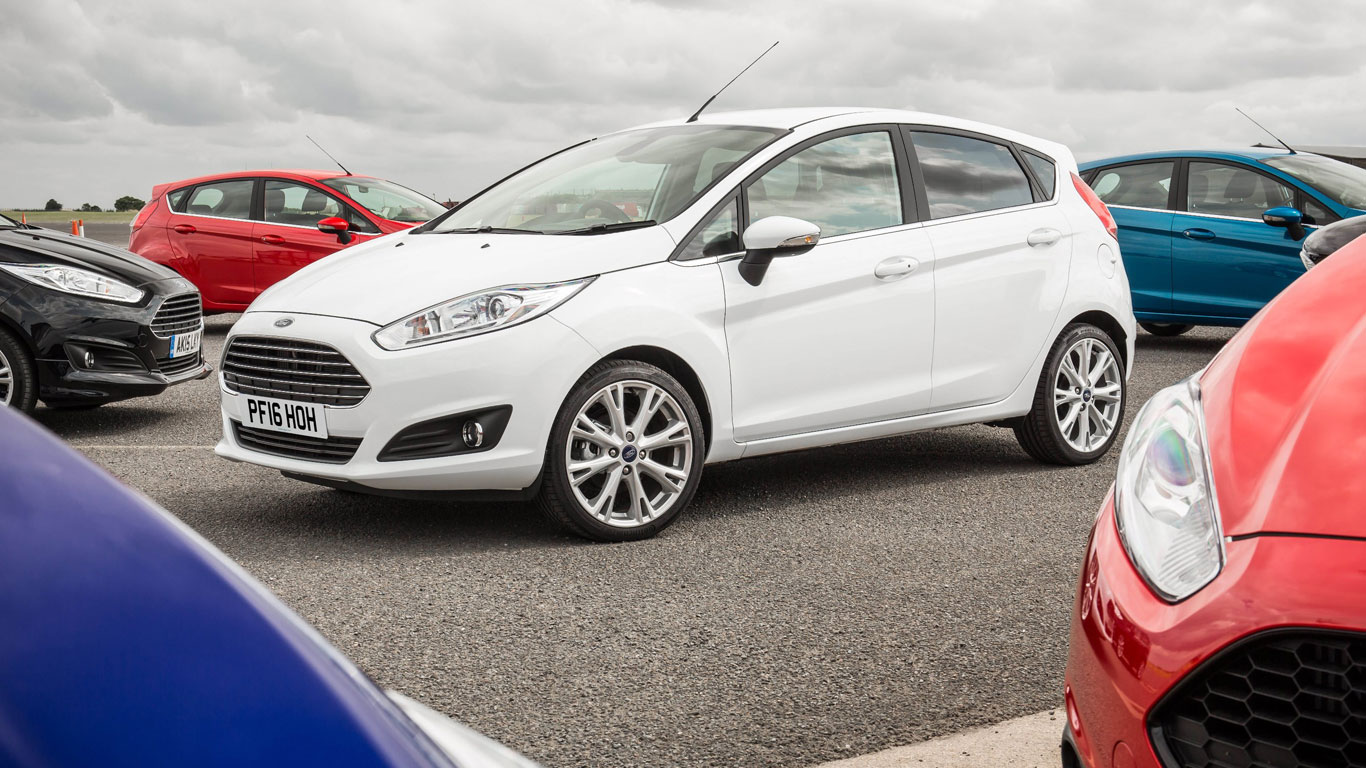 Figures released today by the Society of Motor Manufacturers and Traders (SMMT) reveal that new car registrations in the UK hit a record high in 2016, with more of us buying new cars than ever before. That success is largely down to tempting finance packages, along with a wide choice of new models – but which cars are the most popular in the UK? We’ve analysed the data to pick out the top 20 best-selling cars in 2016.

The 208 was launched back in 2012, but some great deals – including Peugeot’s ‘Just add fuel’ offer – keep it inside the UK’s top 20 best-selling cars. Rivals include the Ford Fiesta, Renault Clio and VW Polo.

Engines for the 208 range from a three-cylinder 1.0-litre petrol to the 1.6 GTI. There are plenty of MINI-style personalisation options available, while Peugeot’s trademark small steering wheel provides a sporty feel. A total of 28,146 Peugeot 208s were sold in 2016.

The Yaris has been around in various guises since 1999, and this third-generation car was launched in 2011. Reliability and interior space are two of its key strengths. And unlike most superminis, it’s available as a hybrid. Toyota shifted 30,741 last year.

The petrol/electric Yaris Hybrid would be our choice. It isn’t cheap to buy, but it costs pennies to run. CO2 emissions of just 75g/km (on the smallest wheels) mean you won’t pay any road tax – at least until the rules change in April 2017. 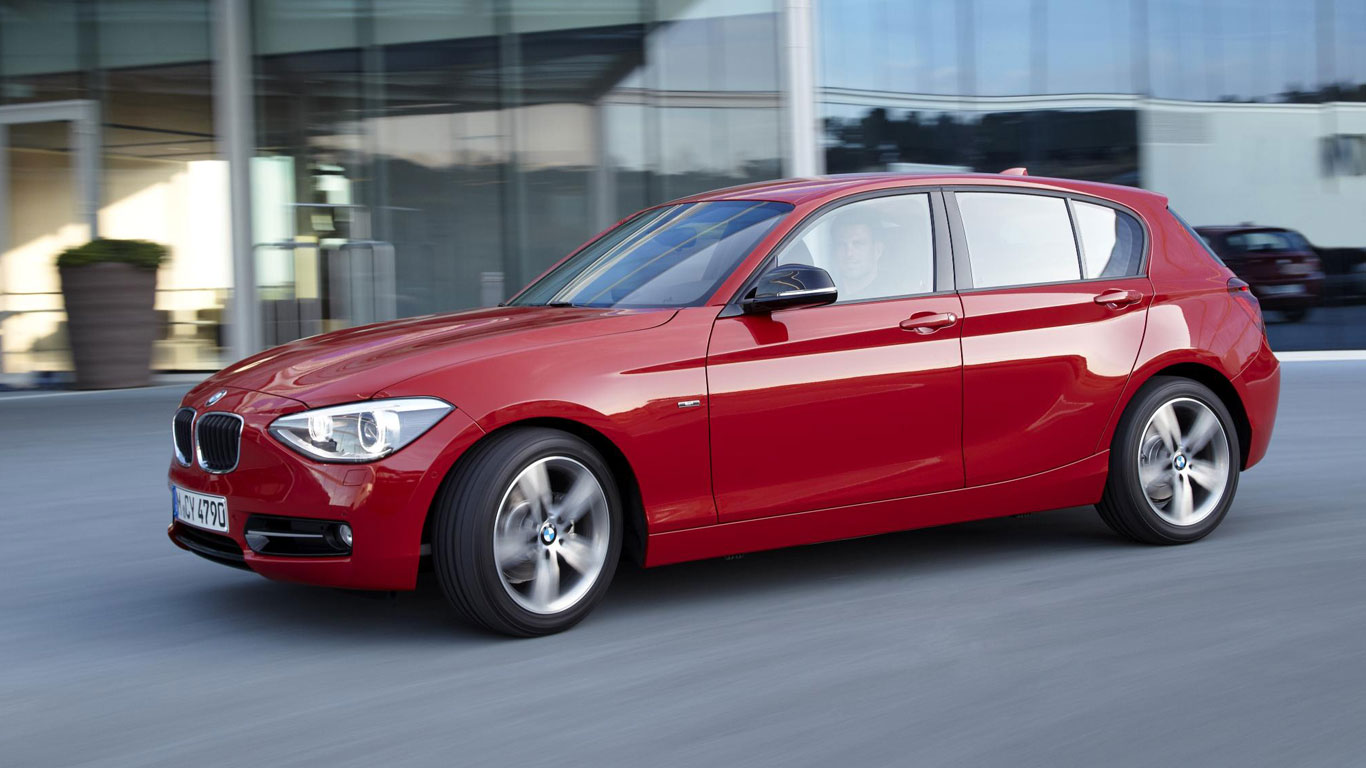 The 1 Series seemed a brave move when first launched in 2004. However, it soon proved that the premium BMW badge could sit happily on a family hatchback, and 34,379 UK buyers took one home last year. What will they make of the next, front-wheel-drive 1 Series? We’ll find out in 2018.

BMW has covered all bases in the engine department. The line-up stretches from the ultra-efficient 116d diesel (83.1mpg and 89g/km of CO2) to the 140i hot hatch (0-62mph in 4.6 seconds). Whichever engine you choose, the 1er is fun to drive. Just don’t expect class-leading space for passengers or luggage.

This Corsa-based crossover was rebranded ‘Mokka X’ in 2016, becoming the UK’s 17th bestselling car in 2016 in the process. In total, 34,809 left Vauxhall showrooms last year. The Mokka X is is larger and more practical than its main rival, the Nissan Juke – but still noticeably smaller than Nissan’s other popular crossover: the Qashqai.

Unlike many cars of its ilk, the Mokka is available with four-wheel drive. It’s well equipped and spacious enough for a family of four. However, it’s utterly yawn-inducing to drive.

Young buyers love the Fiat 500 – which is why the Italian manufacturer has barely messed with the formula since it was launched in 2007. It’s not the best city car available, but it’s comfortably the best-selling in its segment.

A respectable 35,148 Fiat 500s were registered in the UK last year. Rivals such as the Skoda Citigo and Hyundai i20 didn’t even make the top 20. 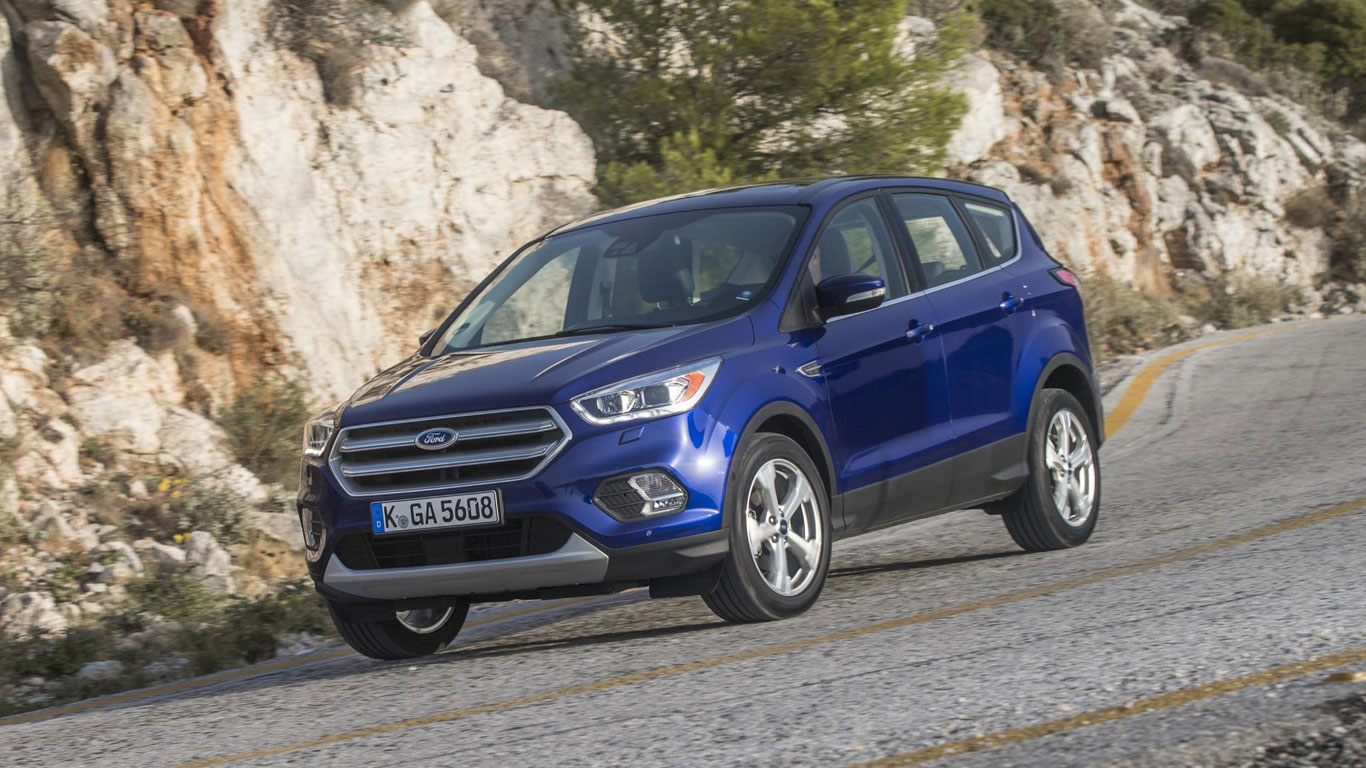 Ford is by far the UK’s most popular manufacturer, but its mid-size Kuga SUV is often overlooked by buyers. Tempting deals help sales, however – and a facelift in 2016 might cement its place in the top 15 for this year.

New for the Kuga is Ford’s Sync 3 infotainment system and 1.5-litre diesel engine, along with a refreshed appearance. Will it remain in 15th place in 2017?

While the BMW 3 Series is a company car driver favourite, it’s a surprise to see it lagging behind a certain rival which appears five places ahead in the rankings. That’ll partly be down to the age of the current F30 3 Series. Launched in 2011, the sixth-generation model is starting to feel old.

It’s still one of our favourite cars in its segment, however, and keen drivers love a BMW 3 Series. With 36,732 registrations in 2016, it’s also in a position that even the Jaguar XE would love to be in – the British 3 Series rival isn’t to be seen in the top 20.

The Nissan Juke divided opinion when it was launched in 2010 – some just couldn’t get past its bold appearance. But those who could found a funky, fun-to-drive crossover that’s tempting buyers away from traditional superminis.

While the Juke lives in the shadow of the larger Qashqai, a solid 13th place ranking and 38,803 registrations is commendable. In fact, it was the best-selling compact crossover in the UK in 2016. Now that’s something to tell your friends about. 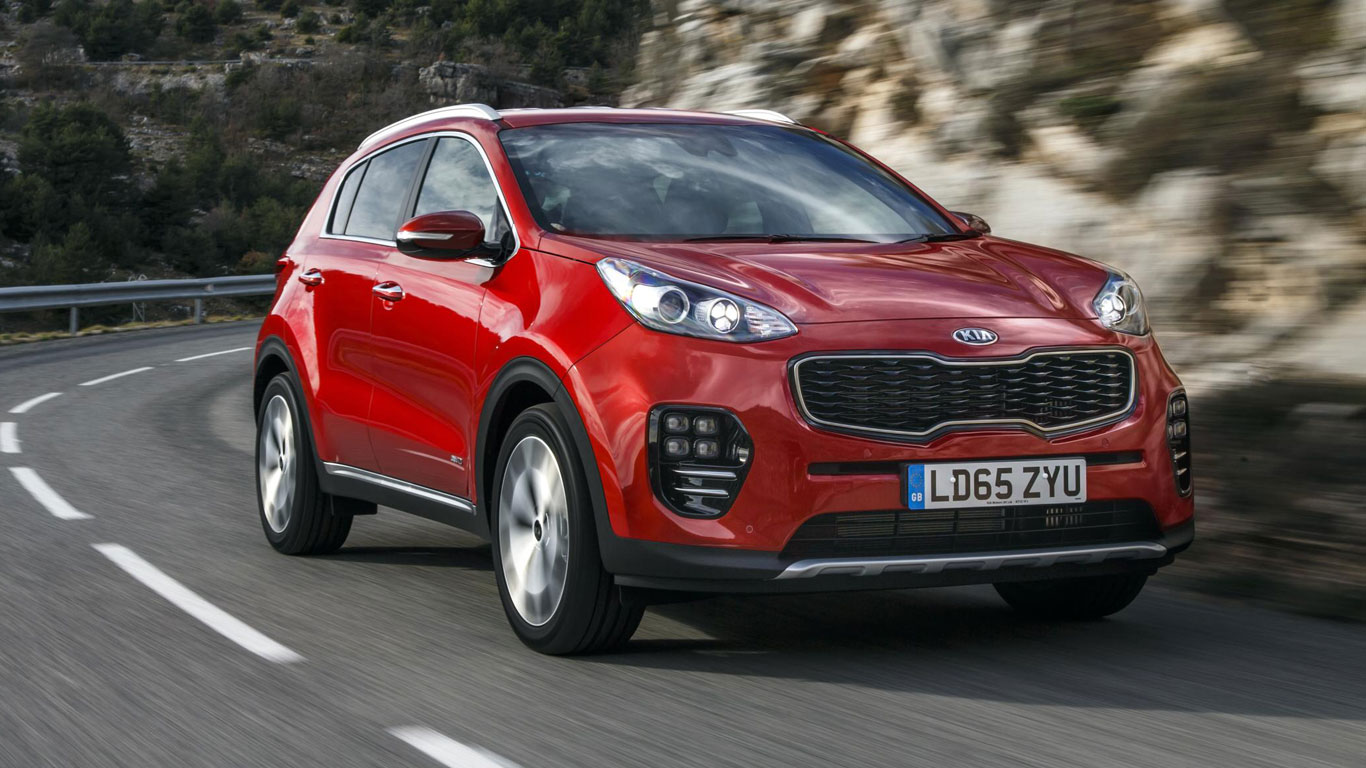 The striking new Kia Sportage was launched in 2016, and already sales seem to be off to a flying start – they’re everywhere on UK roads. Despite the production switchover, the Sportage was Britain’s second most popular crossover last year.

An attractive start price of £18,250, combined with good practicality and commendable efficiency make the Kia Sportage worthy of its 12th place in the UK 2016 sales rankings. A total of 40,083 new Kia Sportages were registered last year.

The A-Class is a competent compact executive – although we’d buy an Audi A3 or BMW 1 Series over the baby Merc.

UK car buyers disagree with us, though – in terms of the BMW 1 Series at least. The A-Class edges ahead of the BMW with 41,183 registrations in 2016, narrowly avoiding the top 10. But how does the Audi A3 fare?

The top 10 kicks off with the popular Audi A3. It’s no surprise to see Audi’s hatchback here – fleet drivers and private buyers alike love the A3, and there’s a bodystyle and engine to suit everyone.

A total of 43,808 Audi A3s were registered in 2016 – that’s out of more than 177,000 Audis sold overall. Despite being rocked by the Dieselgate emissions scandal, the total number of cars sold by the German manufacturer increased by more than 6%. 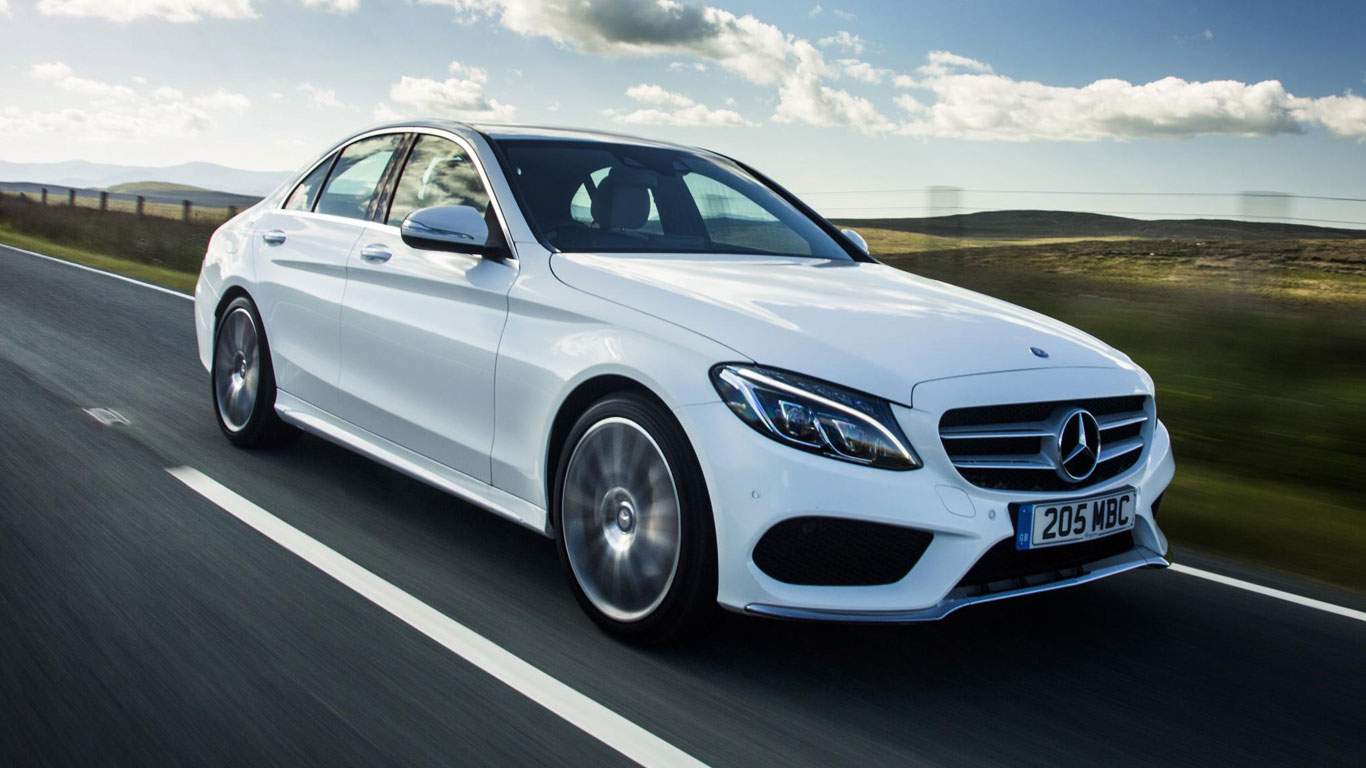 In ninth place is the Mercedes-Benz C Class. You might be surprised to see premium manufacturers such as Mercedes in the top 10, but they’re increasingly affordable. Low depreciation means premium cars can actually work out cheaper to ‘own’ over three years, meaning lower PCP and PCH finance deals can be offered.

Mercedes-Benz registered 44,184 C-Class models in 2016, marginally more than the number of new Audi A3s. It’s interesting that it outsold competitors such as the BMW 3 Series and Audi A4 – but with the new Audi A4 becoming ever more commonplace on UK roads, will the Mercedes hold onto its position in 2017?

It’s 15 years now since BMW launched the MINI brand – and what a clever move that’s proving to be. The MINI hatch is one of our favourite small cars. It’s genuinely premium inside, while the handling is easily best-in-class.

The Volkswagen Polo is due to be replaced this year, but sales of the current model are showing no signs of slowing, with 54,448 registered in the UK in 2016.

The VW Polo comes third in the supermini sales league, behind the Vauxhall Corsa and Ford Fiesta. 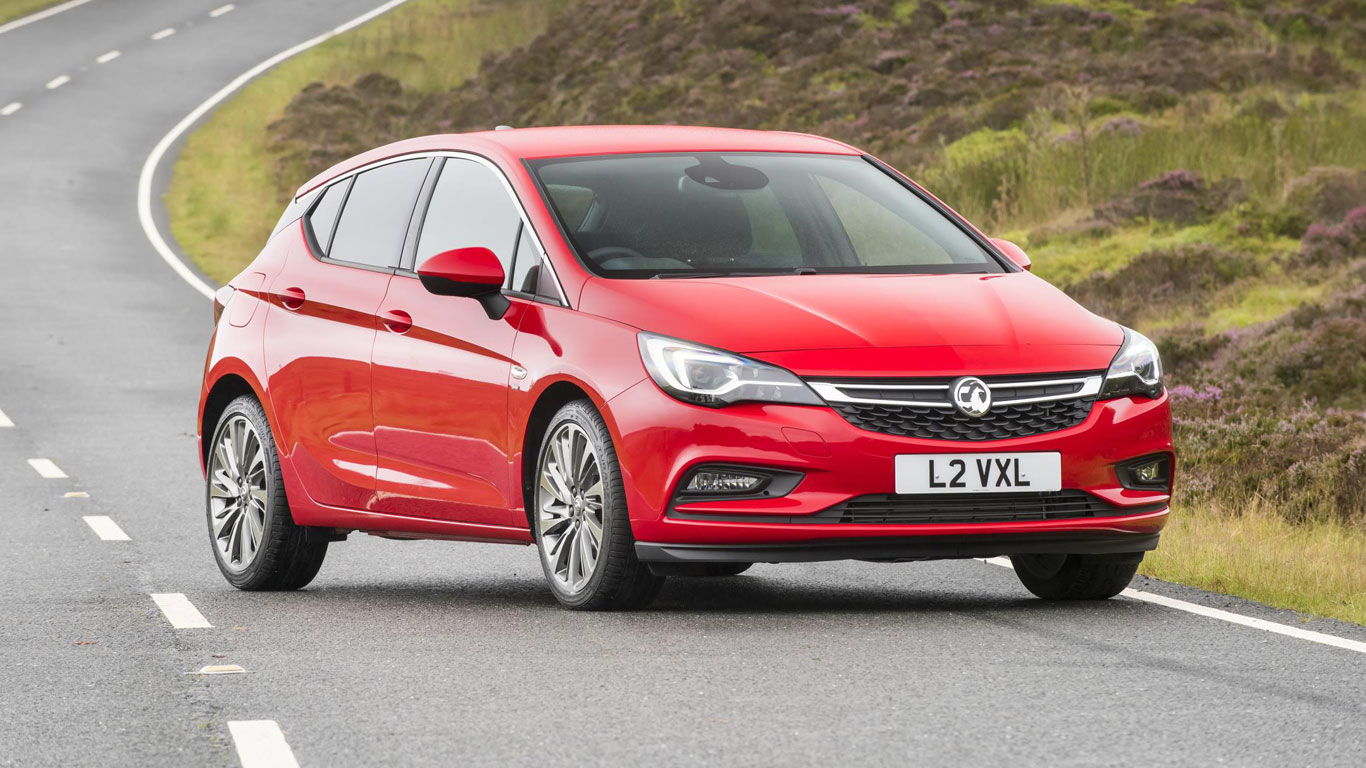 The trusty Vauxhall Astra was replaced in 2016, and the new model was a huge improvement over its predecessor. In February, it was crowned the European Car of the Year. Has that success been reflected in its sales?

The Astra has always been a strong seller. Even so, with 60,719 sold last year, it’s still some way behind its arch nemesis, the Ford Focus.

Ah, the untouchable Nissan Qashqai. The Sunderland-built Qashqai has been widely credited as the car to bring crossovers truly into the mainstream, and it’s the only crossover to appear in the top 10.

The Qashqai’s success is deserved – the second-generation model, on sale since 2013, combines excellent practicality and reliability with the price tag of a conventional hatchback. An impressive 62,682 were registered in 2016.

Despite the shock of 2015’s emissions scandal, Volkswagen’s sales in the UK don’t appear to have been hit too heavily. In December alone, 5,355 Volkswagen Golfs were registered – putting it in the top three best-sellers for that month.

Over the entire year, however, it didn’t quite make the top three. An impressive 69,492 Golfs were registered in 2016, only slightly behind its contender from Ford in the sales stakes… 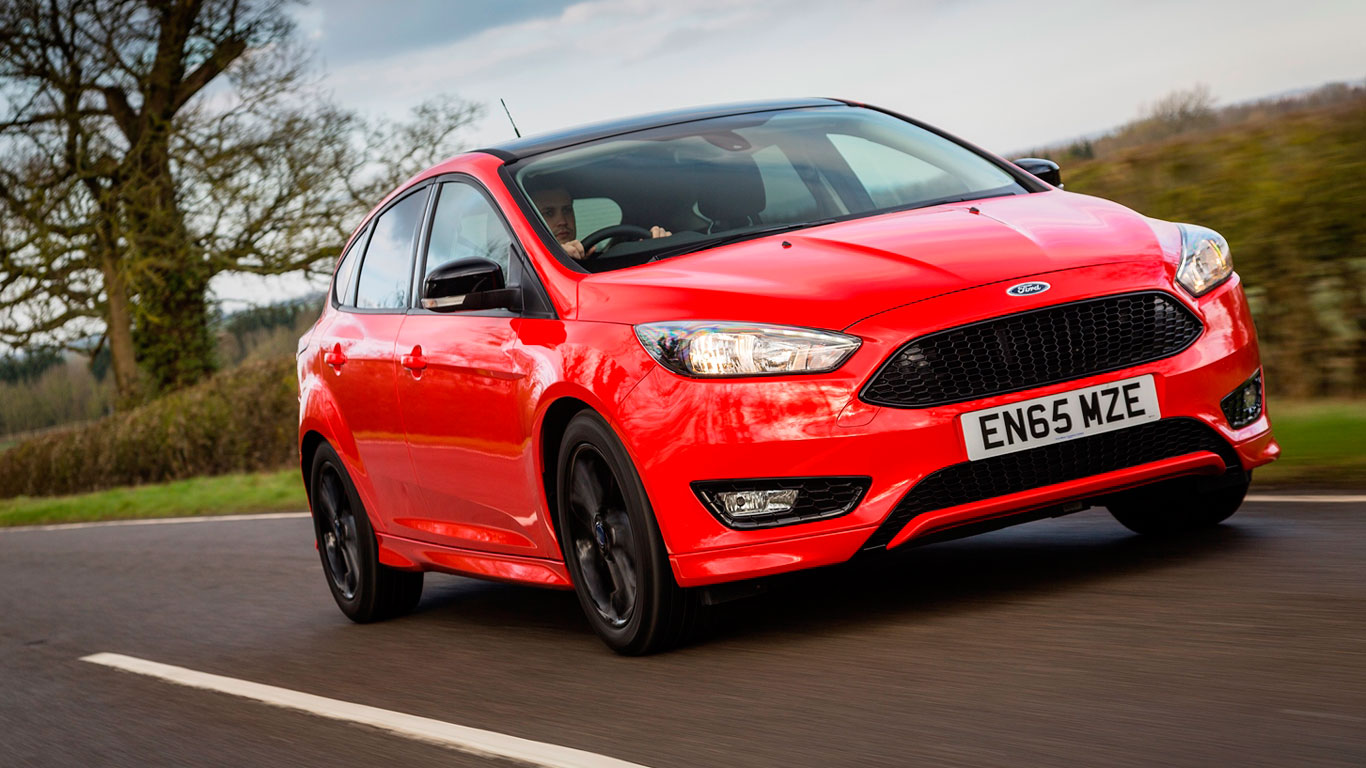 Yes, the ubiquitous Ford Focus takes third position in the UK’s most popular cars of 2016. The Ford Focus has constantly sold well in the UK since it was launched in 1998, and the latest model is great to drive.

A whopping 70,545 were registered last year, with nearly 5,000 passing through dealerships in December alone. But it’s still some way behind the top two…

If you’ve ever travelled on UK roads you won’t be surprised to read that the Vauxhall Corsa is one of the most popular cars on sale. From grans to boy racers, everyone loves the Corsa, and the latest model is undoubtedly one of the strongest in the supermini segment.

More than 77,000 Vauxhall Corsas were registered in 2016, although a quiet period in December saw it relegated to sixth place for that month. That didn’t affect the Corsa’s yearly sales but, of course, it has a thorn in its side…

Yes, the Ford Fiesta, despite being largely unchanged since 2008, it remains Britain’s favourite car by some margin. A staggering 120,525 were registered in 2016, with 8,198 bought in December alone.

That means more than 43,000 more Ford Fiestas were registered in 2016 than Vauxhall Corsas – and almost three times as many Ford Fiestas as Audi A3s. The Fiesta’s replacement is due in 2017 and first impressions are positive – but is it good enough to cling onto number-one spot? Time will tell.

Diesel’s difficult journey over the last few years may be about to come to a head, with some claiming 2020 will be 'make or break' for the under-fire fuel.
Read more

Diesel bans: where can’t you drive in the UK and Europe?

Apple announces 'do not disturb' driving mode for iPhone

It will arrive with iOS 11 later this year.
Read more