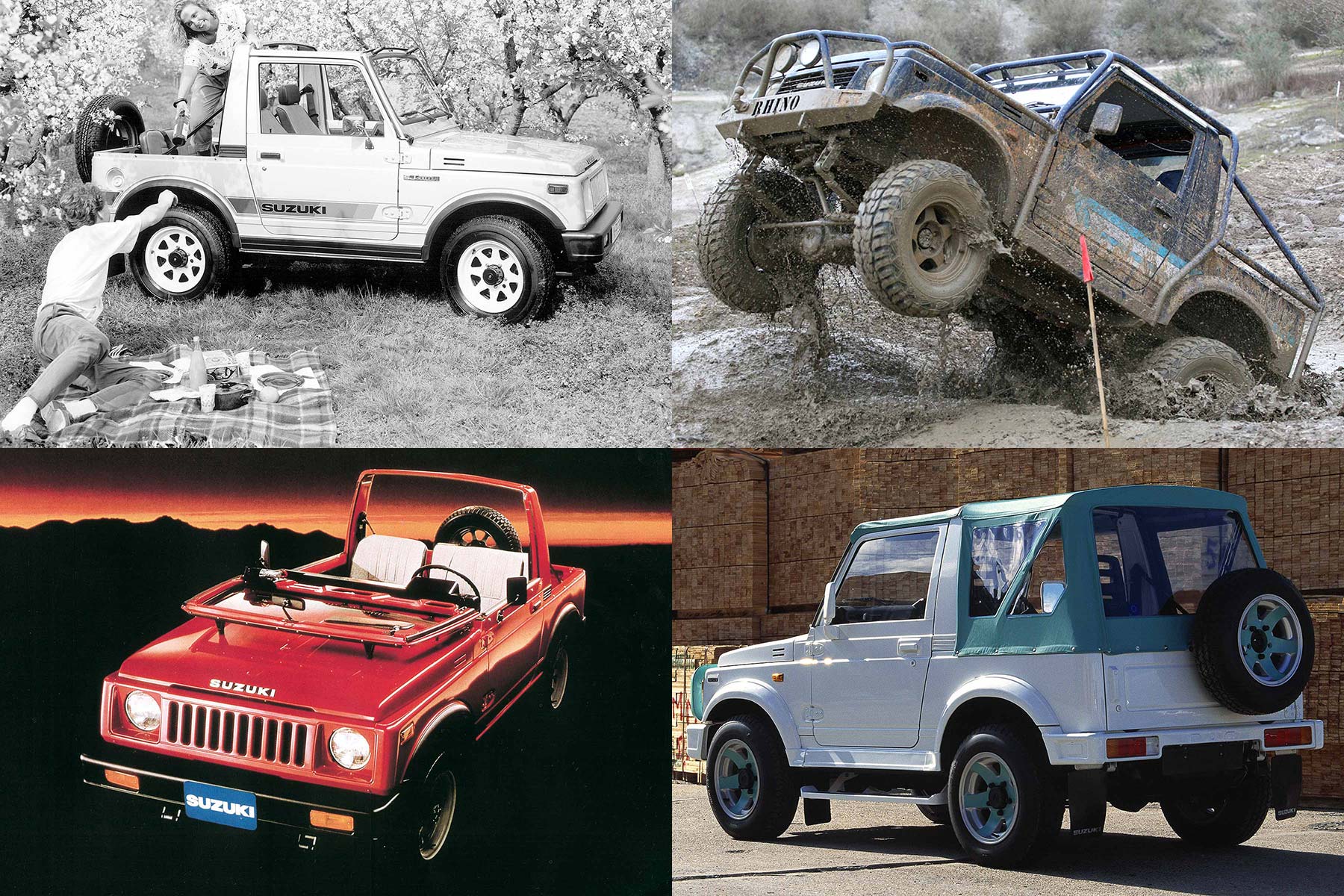 When it comes to road transport, four wheels are generally better than three, and if staying dry and safe bothers you, two wheels even more.

Suzuki’s baby SJ410 four-wheel drive, however, occasionally seemed uncertain over whether it was a four-wheeler or a two, a little too much of its maker’s proud motorcycle prone to sudden appearances while cornering.

See, the SJ410, a rather neat and temptingly affordable jeep-in-miniature, had a tendency to tip and fall.

Install someone young, fast and unaware behind its neat plastic wheel, show them a bend and they could rapidly learn about high centre’s of gravity and their potential effects on tall, narrow objects travelling at speed, as well as the unsuitability of off-roaders for speedy on-roading and how toppling over does not look cool. 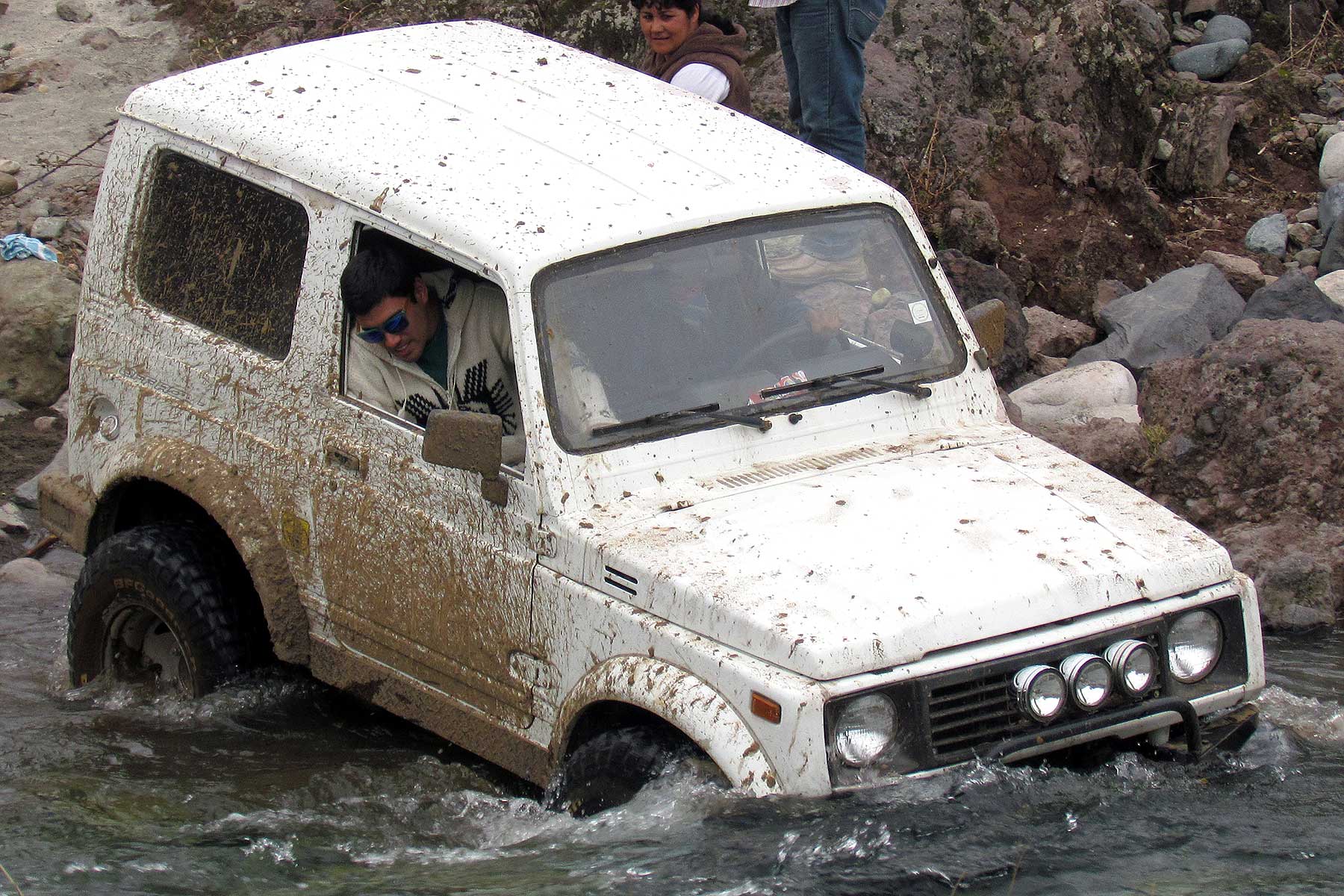 Not that ‘cool’ was a cool word in the mid ‘80s, when the Suzuki SJ fad really took off. But the Suzuki suddenly became a very cool thing, particularly if it was white, had white wheels and was (usually) occupied by someone wearing white stilettos.

Commonly found outside night clubs in the era when George Michael, Madonna, Duran Duran and Frankie Goes to Hollywood sang floor-filling hits, the SJ was a favoured set of wheels for the legendary 1980s Essex Girl, who usually chose the soft-top version of this tiny four-wheel drive to better show-off her orange tan and peroxide streaked hair. Occasionally, this myth was even true. 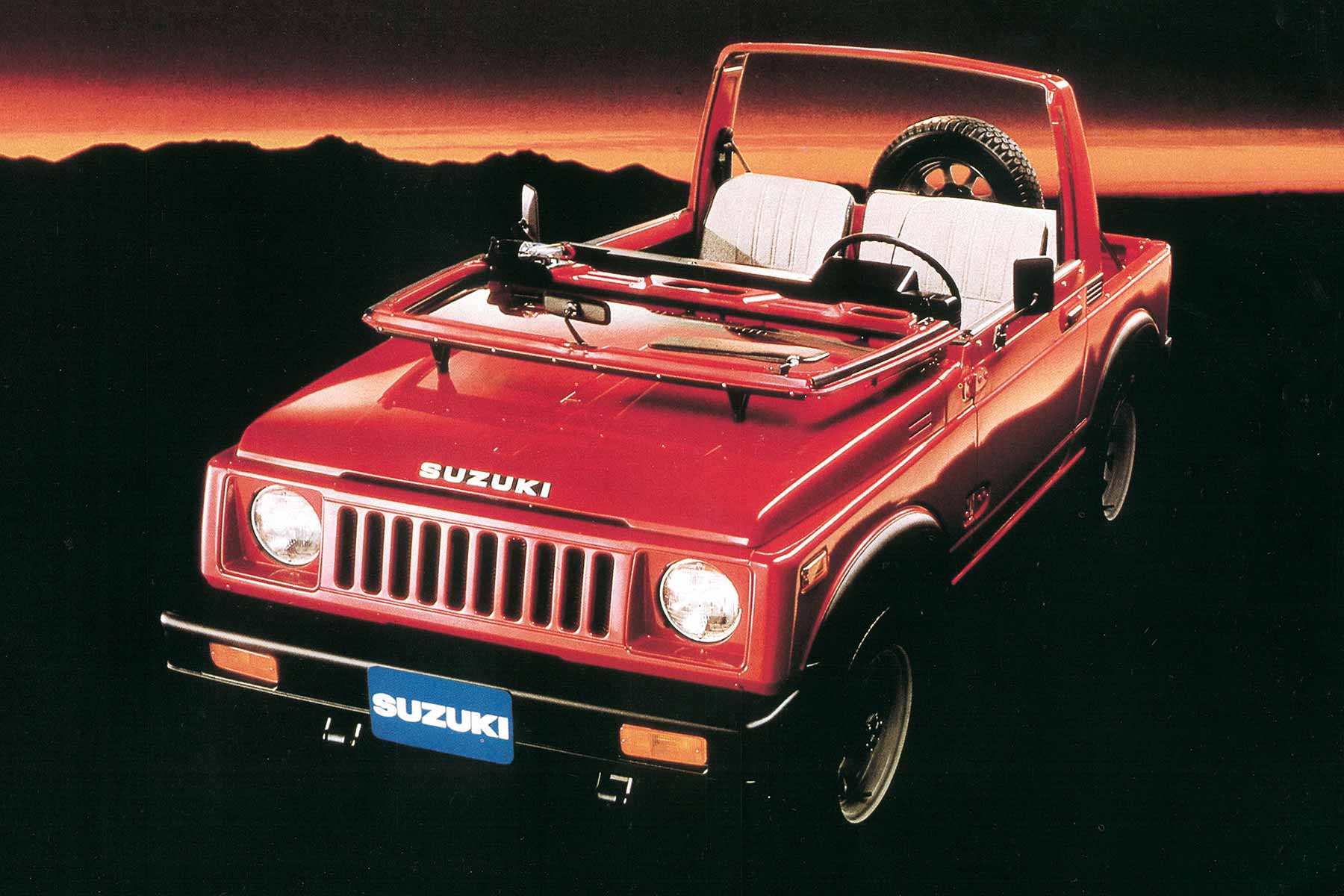 The Suzuki SJ, however, was not originally designed for the cocktail-and-paper-umbrella world at all. It was a descendant of Suzuki’s 1970 LJ20, a miniature twin cylinder jeep with utility styling, selectable four-wheel drive and a price low enough to forgive its canvas doors.

Cleverly, its spare wheel was helpfully stored behind the front passenger seat so that it squeezed within the tight dimensions of a Japanese Kei car.

Despite its puny 25bhp it was an effective device in a quarry, and among others, began being bought by civil construction companies. They favoured it over Land Rovers, because the LJ was so cheap that its purchase price could painlessly be written-off over the life of the contract, the no-doubt heavily-abused Suzuki binned on the project’s completion. Others simply bought them as a cheap set of fun wheels.

Suzuki had discovered a new niche, and in 1975 enlarged the LJ’s 360cc twin to a heady 550cc, creating the LJ50. The spare wheel migrated to a mounting hung from the LJ’s rear-end, this big-engined export version not needing to comply with the Kei car rules.

It sold well in Australia, encouraging Suzuki to introduce the still more reckless LJ80, this time with a four cylinder developing a rampant 41bhp. The LJ80’s eventual launch into the Netherlands, the absence of inclines presumably flattering its performance, formed a bridgehead for an advance party of these baby jeeps into Europe.

But it was the 1982 SJ that led the invasion into Britain’s nightlife, although it took a while to warm up. Launched as the SJ410, it was propelled by a 1.0 four that could push it no further than 68mph on 45bhp and four speeds, which was fine for off-roading if less effective on the A118 towards Romford.

A separate ladder chassis, simple drum brakes and a quartet of leaf springs were designed to sustain a tough life on building sites and in the bush, spanners and a welding torch good for fixing anything that broke. Not that much did – the SJ was a tough little thing.

Like plenty of early off-roaders this Suzuki was part-time four-wheel drive, the price-reducing absence of a centre differential not only requiring you to jab a lever for all-wheel drive, but also to get out and lock the front wheel hubs.

Not good for footwear if you’d entered a bog, especially stilettos. But with low range as well you could get yourself across some pretty testing terrain and being light – just 850kg as a soft-top – the SJ could get about like a mountain goat. And without munching on the local vegetation.

In Britain sales were limited by the fact that there was a quota applied to the import of Japanese cars, the so-call Gentlemen’s Agreement largely devised in a (failed) bid to protect British Leyland’s tumbling market share.

Suzuki investigated building the SJ in Europe to circumvent it, and did a deal with Spain’s Santana Motor which ironically, also made BL’s Land Rover to its own recipe. Assembly of the SJ began in 1987, allowing Suzuki’s increasingly successful UK importer to bring almost unlimited numbers of SJs over here. 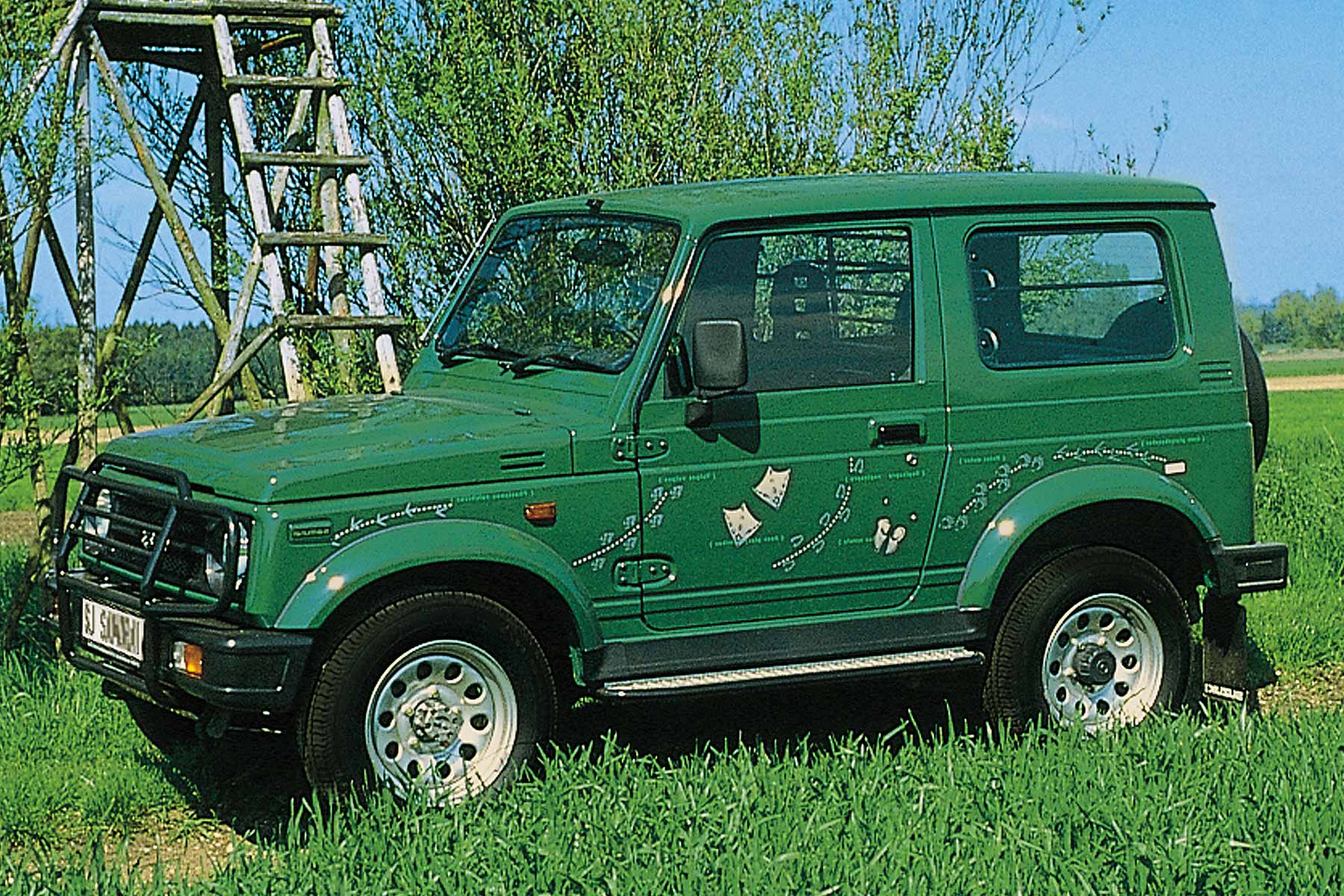 Two years earlier the SJ413 had been launched as an estate, its 1324cc motor putting out 66 ground-shivering horsepower to further tempt buyers. This and a five-speed gearbox boosted the SJ’s top speed by 10mph to 78mph, although it was still going to struggle against a white Escort XR3i cabriolet screaming its way to Millionaires.

But before that came scandal, and not of the Essex girl variety. An assortment of consumer bodies, including Britain’s Which? and America’s Consumer Reports, discovered that if you drove a tall and narrow vehicle into a bend faster than you would a Lotus, it tended to topple over.

In fact, you could be going a lot slower than you would in a Lotus and still momentarily reduce tyre-wear on the SJ’s in-board flank.

The discovery of this destabilising habit produced a small explosion of angry newsprint. And in America, a lawsuit, which uncovered the fact that Suzuki had tried to hide the truth about the SJ’s instability.

Little of which seemed to impede its sales and certainly didn’t produce a recall. Instead, salespeople were lamely told to make buyers aware of its on-road limitations. 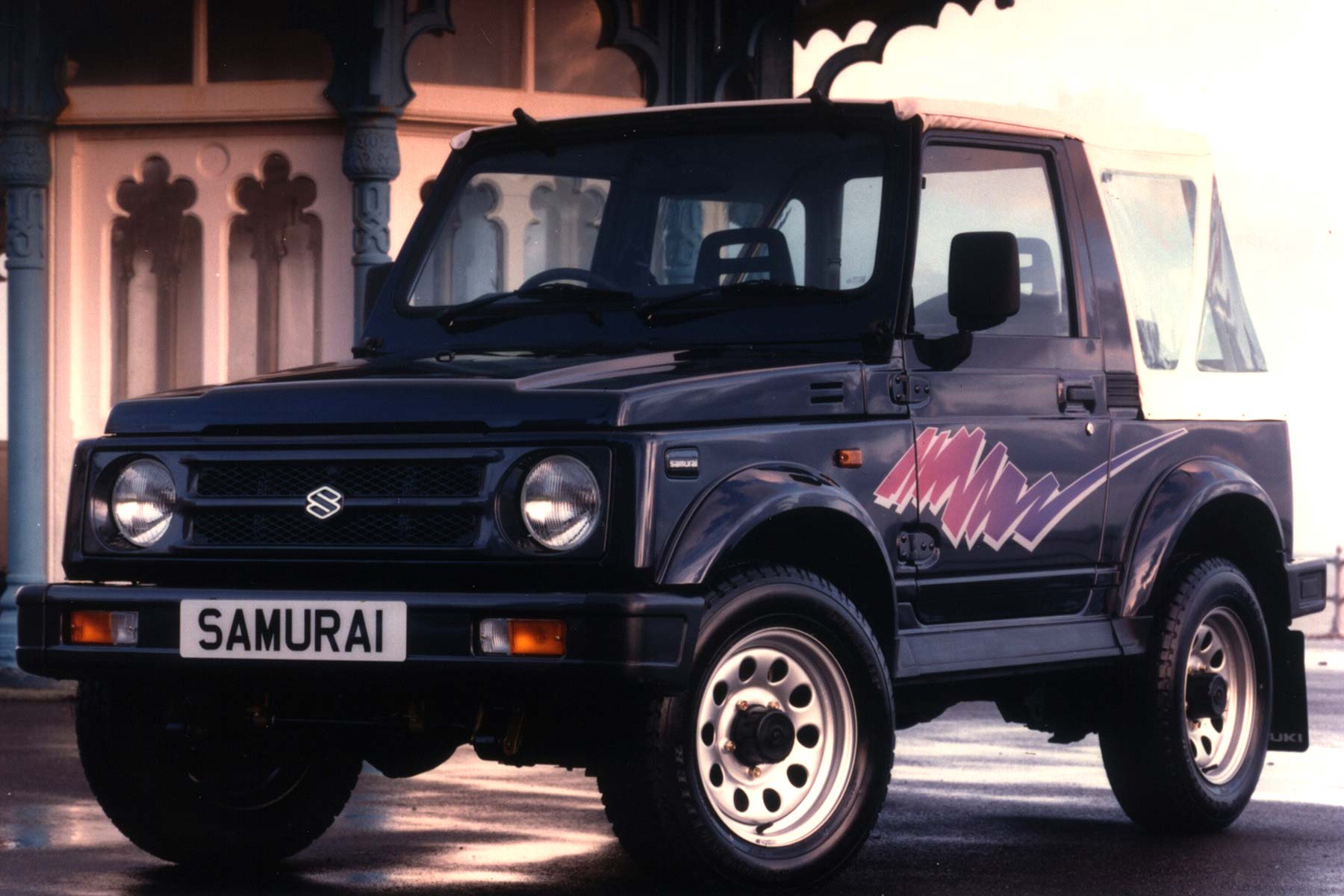 Towards the end of the ‘80s the SJ had almost become a cult car, its UK importers cannily exploiting its appeal with the sale of special versions like the Rhino, complete with silhouette of said beast on the spare wheel cover, graphics packs, alloy wheels, bull-bars and side rails.

All of which allowed one nightclub guest to distinguish their SJ over another’s, though perhaps less successfully in a dark winter car-park.

In 1988, Suzuki supplemented by the decidedly more stylish Vitara, whose stabilising extra width usefully diminished the chance of scraping its roof. That sold well in white too.

Today the SJ is almost forgotten, partly because it became as unfashionable as shoulder pads, but also because most disappeared into the ether, their thin steel panels dissolving as fast as ice cubes after the party.

But if you want to relive some of the experience – though not the tendency to topple – you can buy the Suzuki Jimny, the SJ’s diminutive and long-running successor, debuting in 1997.

It’s not so great on road, but it’s brilliant off-it, and doesn’t cost much. Which was Suzuki’s original point.

Now watch the video that caused all the fuss…