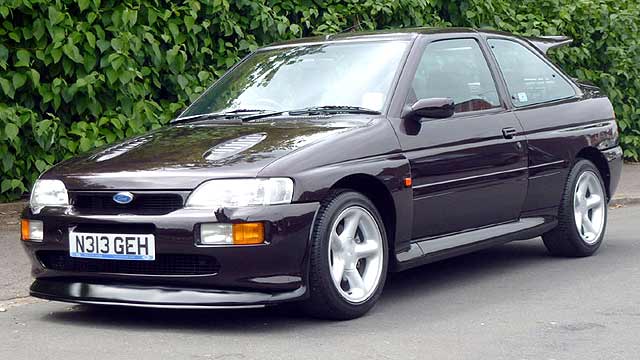 A Ford Escort RS Cosworth that’s covered just 9000 miles and has been cosseted its entire life goes up for auction in Buxton today… But how much will it make?

The 1996/N Cosworth, chassis number 93225, defines immaculate. The owner apparently bought it with the idea of using it sparingly and keeping it pristine, and he seems to have done just that.

It was used occasionally for the first decade of its life, with the longest journey ever made being a run from Cornwall to John O’Groats. But it was taken off the road in September 2907 for an easygoing life in a heated garage instead.

The owner, an ex-Jaguar and Rolls-Royce engineer, didn’t just park it up and leave it, though. No, he religiously ran it up to operating temperature every six weeks or so, ensuring that it should mechanically still all be perfect. It even comes with a full MOT to July 2015, despite being off the road for seven years.

The colour is Dark Aubergine, the interior’s in Raven leather and the only option was a full-size spare wheel. A extremely desirable car indeed – with the added curio fact of being the original owner’s second Escort RS Cosworth; his first was the sister car to Jeremy Clarkson’s Top Gear long-termer…

Question is, how much for this apparently wonderful car? The auction house, H&H, reckons between £24,000-£28,000, but we can’t help but think it will go for more. What do you reckon?

We won’t have long to wait before we find out, mind: the auction is today. MR will bring you the final hammer price later…