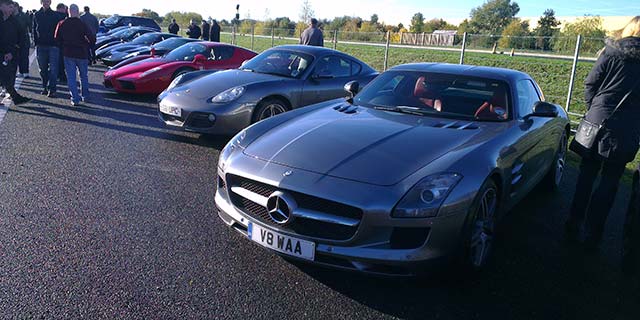 Here at Motoring Research we’re all petrolheads – which is why, at the weekends, after a week of working with cars, we like to… go and play with cars.

Which explains why, bright and early yesterday morning, I pointed my slightly sheddy Mazda MX-5 down the M1, destination: Mercedes-Benz World Brooklands, for the Pistonheads Sunday Service.

If you’ve not heard of this event before, it’s simple: essentially, car enthusiasts of all varieties congregate at a base, such as M-B World, and spend a couple of hours admiring each other’s cars and supping coffee. What’s not to like?

On arrival, I found myself in a truly epic traffic jam – a McLaren SLR behind me and a trio of Ferraris in front. Names were checked against the sign-up sheet – spaces are strictly limited, on this occasion to 600. That’s 600 petrolhead cars – from bargain basement MX-5s like mine to a Lamborghini Countach.

After signing in, there’s a short straight stretch, lined with onlookers. “Try not to treat the straight between the PH sign-in and car park entrance as a drag strip”, we’d been warned ahead of arrival. Er, OK…

So at speeds of, erm, let’s say ‘5mph’, spectators were treated to the sound of an eclectic mix of supercars definitely not bouncing off the rev limiter. And my slightly tappety misfiring Mazda.

Although I was quite happy to spend a few hours just drinking in the exotica that had arrived, there was plenty to do. Passenger rides could be had in a variety of AMGs, from the A45 to the SLS. I also took a look around Mercedes-Benz World, particularly liking the look of a G-Class they had on sale – I’ll take mine in G 63 AMG form please.

By lunchtime it was time to head home – it’s not an all day event, just a few hours indulging in my petrol-fuelled passion before leaving to do mundane weekend things.

The best thing I took away from the Sunday Service? The feeling that it is OK to be a petrolhead – we’re not evil monsters wanting to pump CO2s into atmosphere – and there’s still a huge community of like-minded people.

I’ll remember that the next time someone asks me why I drive an old Mazda.