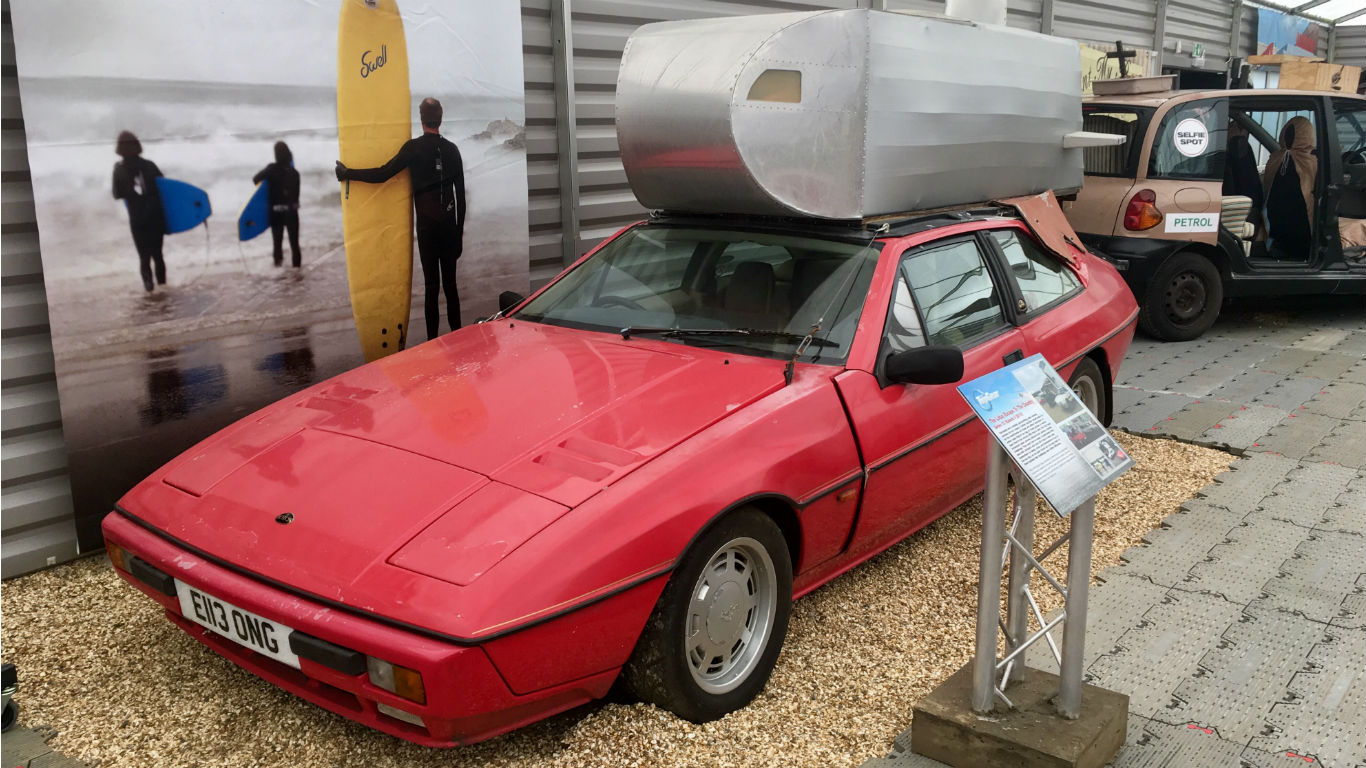 They were ambitious, but rubbish. So, what happened to the Top Gear challenge cars built by Clarkson, Hammond and May – and indeed LeBlanc, Harris and Reid – after filming had finished?

Many, such as James May’s ‘Lotus Escape to the Country’ seen above, are displayed at World of Top Gear – a recently revamped exhibition at the National Motor Museum, Beaulieu. Join us for a guided tour. 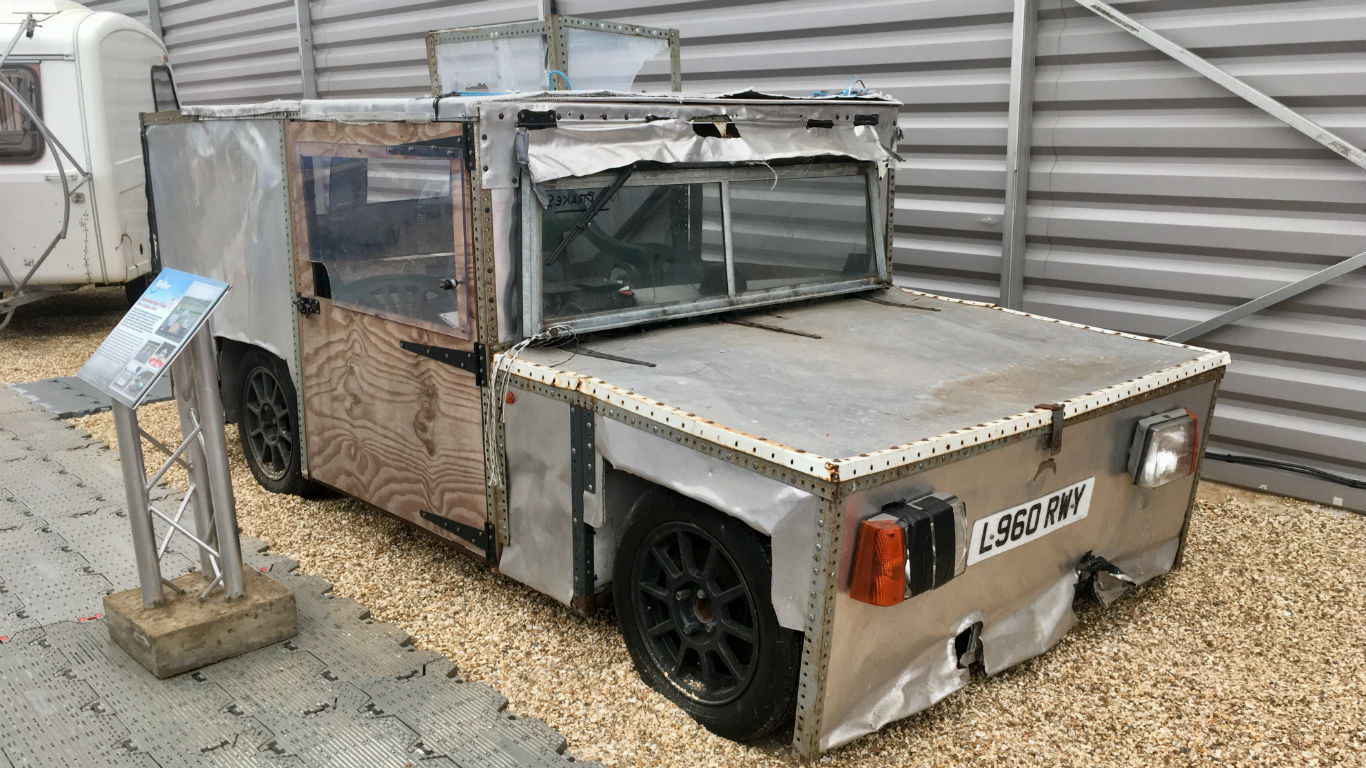 ‘Hammerhead Eagle i-Thrust’ sounds like a good name for a supercar, but the reality is anything but. The TG team’s risposte to the – equally rubbish – G-Wiz, this home-made electric car starred in series 14, episode two.

The HEiT was subsequently road-tested by Autocar magazine, causing the generator to come off its mountings and slide around the cabin. Here’s a taster of the review: “We failed to crack 60mph. In the end, it reached 50mph in 16.6sec and ran out of juice at 55mph, making it the slowest car we have tested this century.” 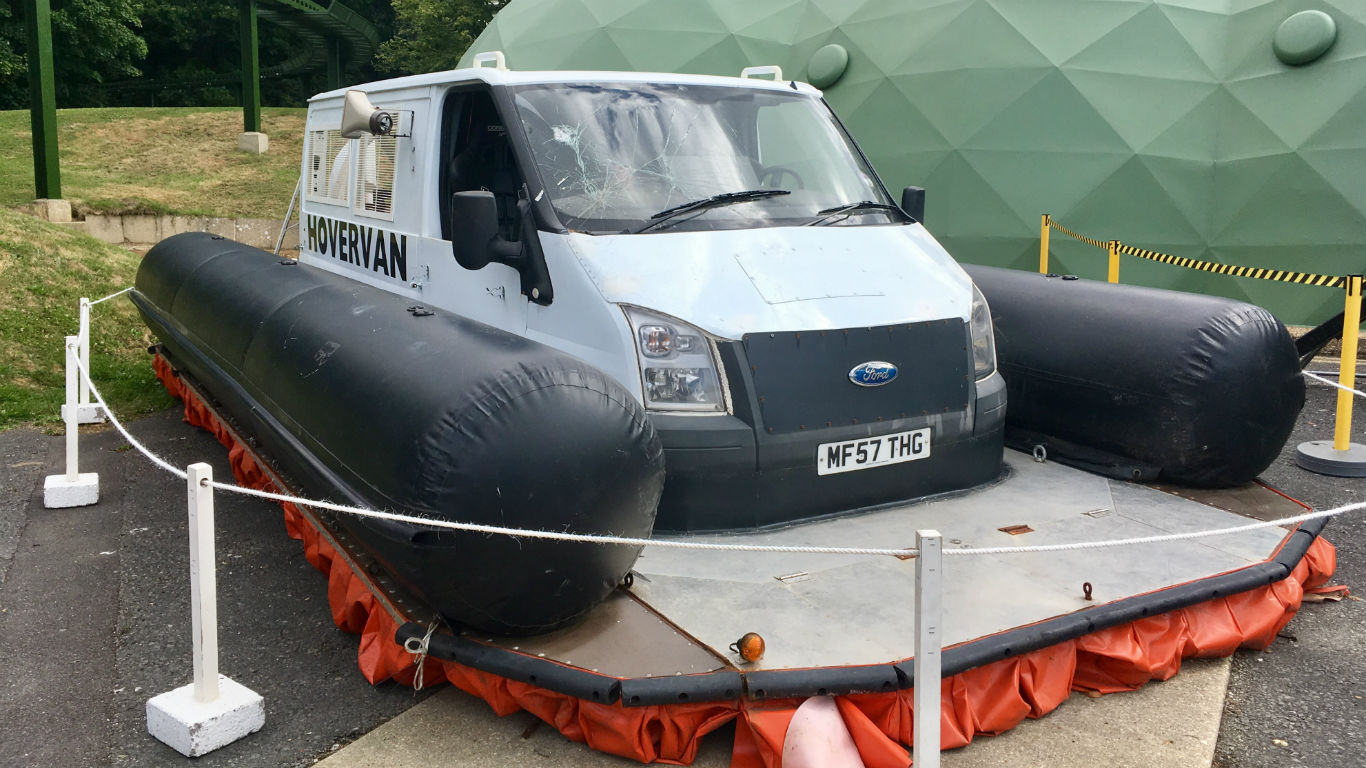 Top Gear’s response to widespread UK flooding was the Hovervan: a Ford Transit that’s also (you guessed it) a hovercraft. Featured in series 20, episode four, this is actually the second-generation Hovervan – the first sank on its maiden voyage. 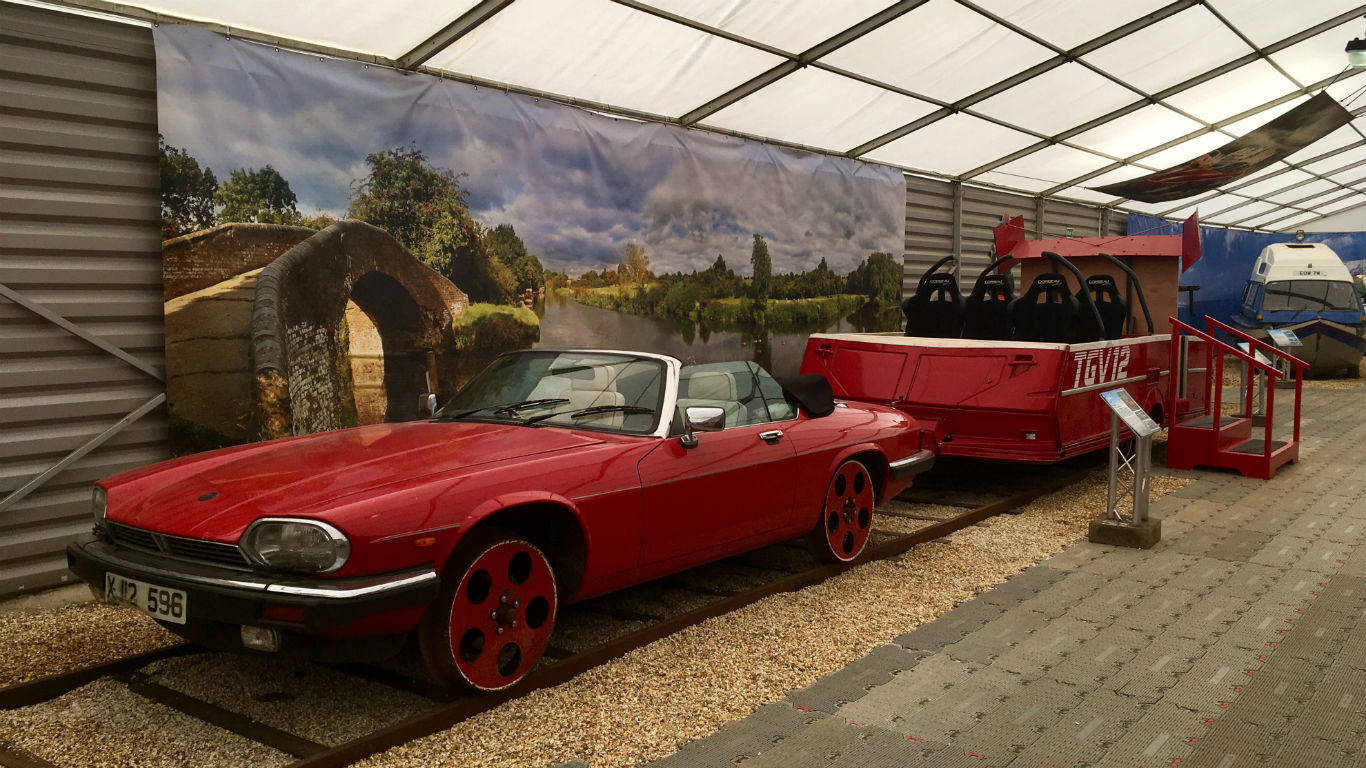 It’s tempting to say the TVG12 is half-car, half-train. But really it’s just a Jaguar XJS convertible with a set of cast iron wheels. Nonetheless, Clarkson gamely connected the Jag to a ‘carriage’ (a caravan with the roof sawn off) and completed a rail journey from Leicester to Loughborough.

With that huge makeshift wing on the back, we suspect this track car (sorry) will corner like it’s on rails (sorry again). 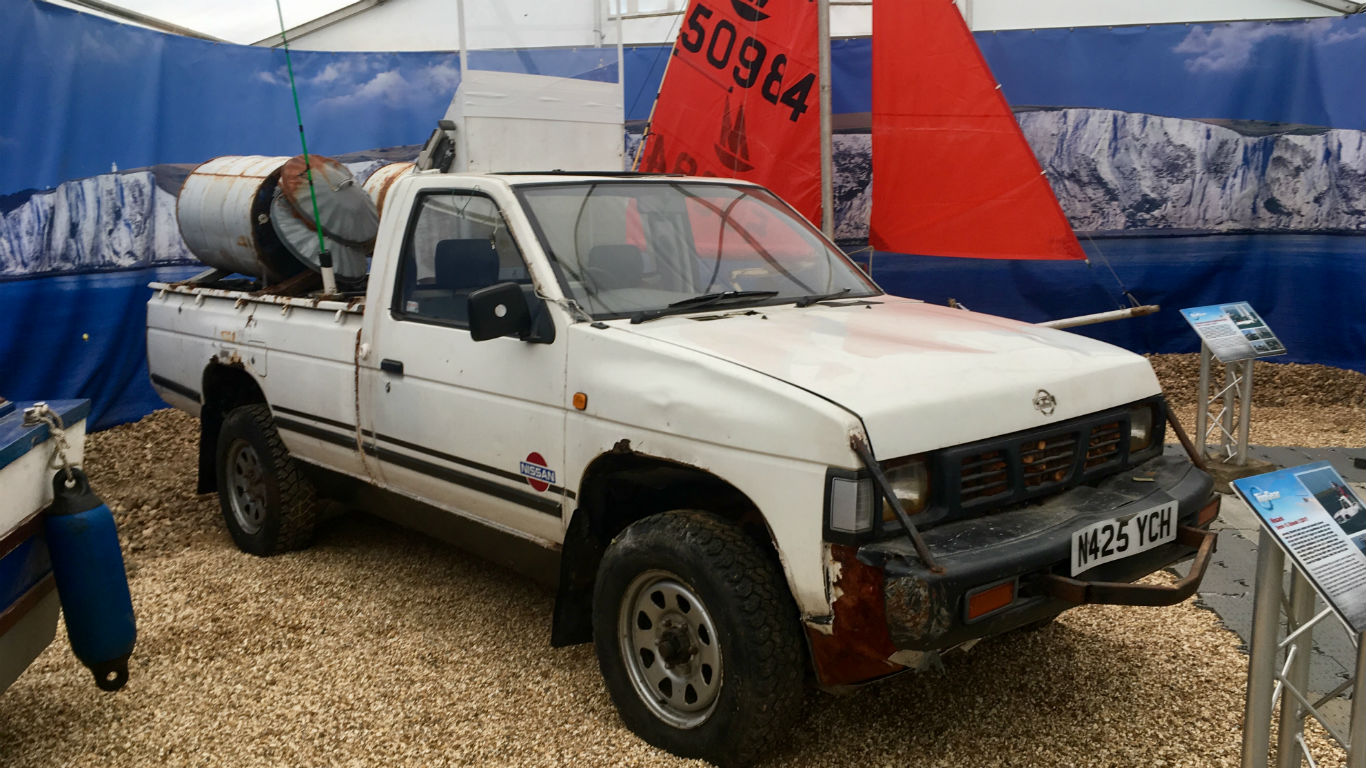 Calling this modified 1996 Nissan D21 pick-up the ‘Nissank’ was misleading. In fact, it was the only one of three TG amphibious vehicles to successfully cross the English Channel. Captained by Clarkson, it sailed from Dover to Sangatte, near Calais.

In addition to empty barrels used as flotation devices, Jeremy installed a couple of fishing rods to pass time while he waited for James ‘Captain Slow’ May. The Nissank stars in series 10, episode two. 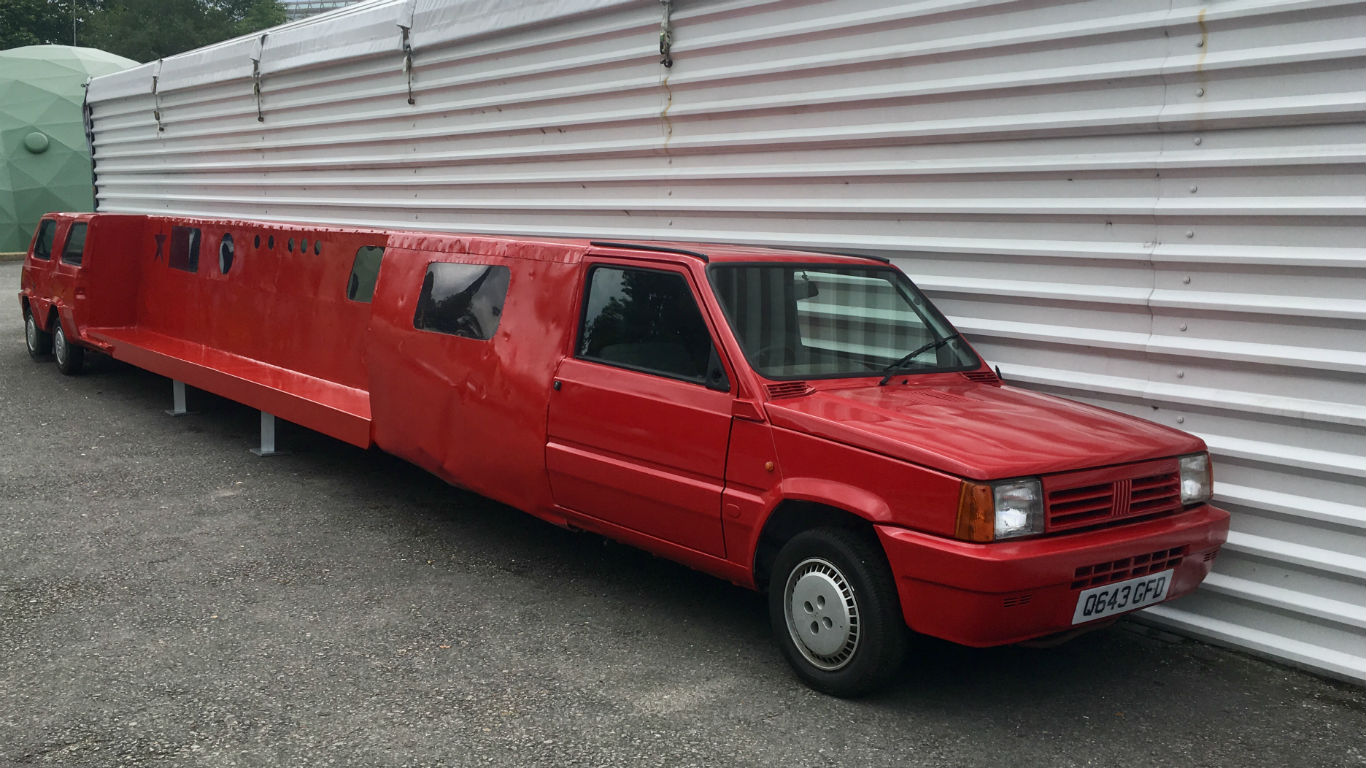 Stretched limos are always a bit rubbish, but Top Gear’s homemade effort goes further. This elongated Fiat Panda actually broke in half while ferrying DJ Chris Moyles across London to the Brit Awards.

The Q-plated Panda lives on as a bench for visitors to the World of Top Gear. It’s probably safer that way. 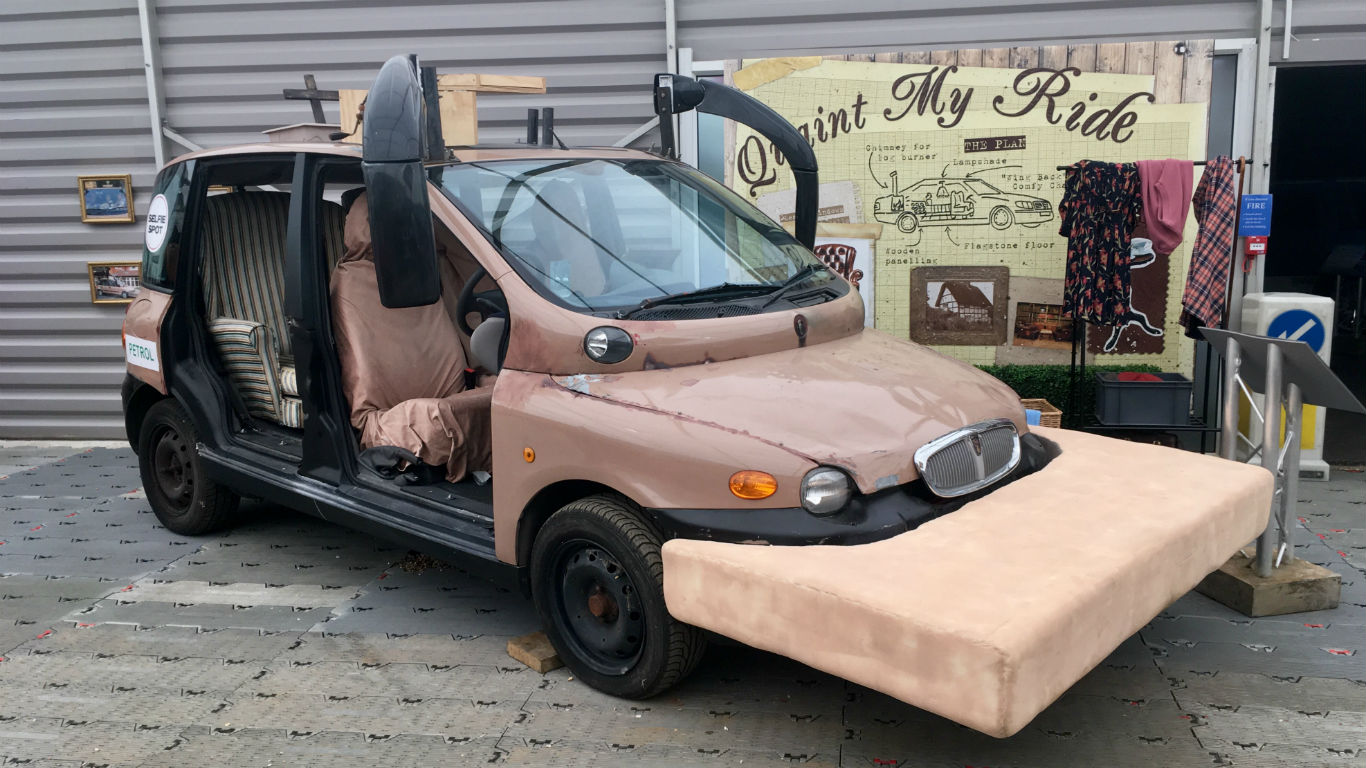 This Fiat Multipla was thoughtfully converted into a car for old people (such as James) by Jeremy and Richard. Note its hearing-aid beige paintwork, safety-conscious front bumper and Rover badges. Because oldies prefer to buy British, obviously.

Step inside and you’ll notice the large-print speedo, waterproof front seat and Shackletons easy chairs for passengers. There’s also a supplementary boot: a shopping trolley hooked onto the rear bumper. 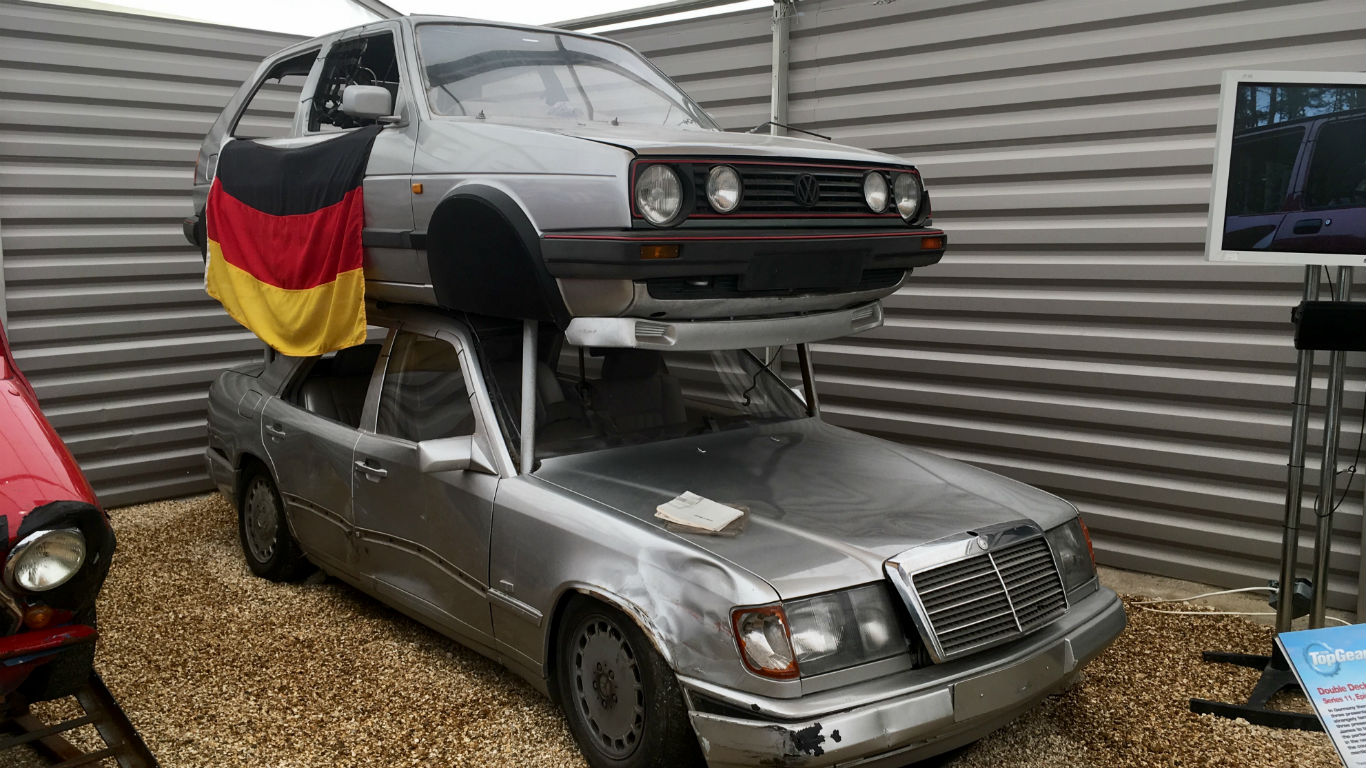 If you ask us, this looks like a sad waste of a Mk2 Volkswagen Golf GTI and a W124 Mercedes-Benz E-Class. Still, who are we to stand in the way of family entertainment?

The double-decker cars challenge (series two, episode six) saw the TG team take on their counterparts from a German TV show. Unfortunately, while their rivals had the tank-like Merc and solidly-built VW, the Brits had to make to with Jaguar XJs carrying Rover Metros. 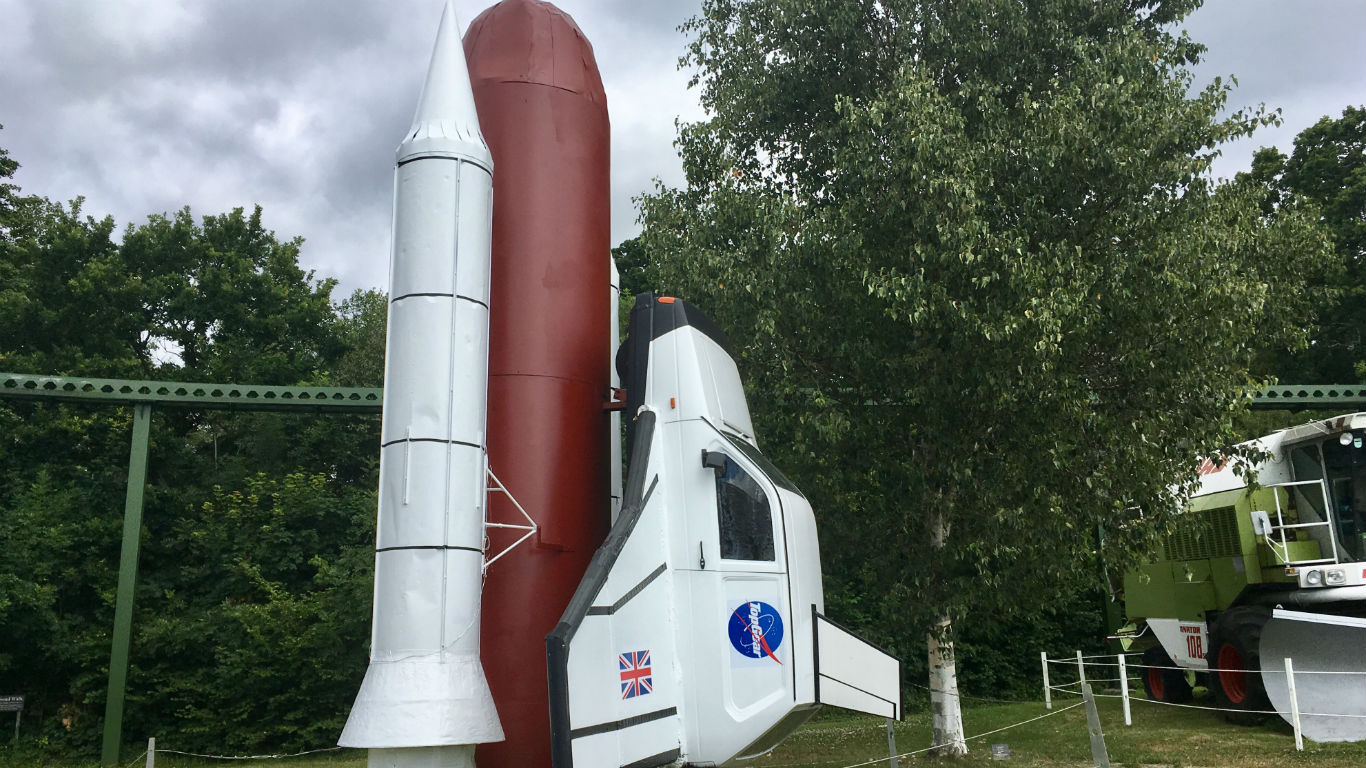 Now, this really was ambitious. With eight tonnes of thrust, the Reliant Robin space shuttle (series nine, episode four) was Europe’s largest non-commercial rocket launch ever. And it worked… sort of.

The shuttle achieved lift-off but failed to detach from the fuel tank, causing it to spin out of control and crash. Nonetheless, of all the Reliant Robins wrecked by Top Gear, this one went out with the biggest bang. 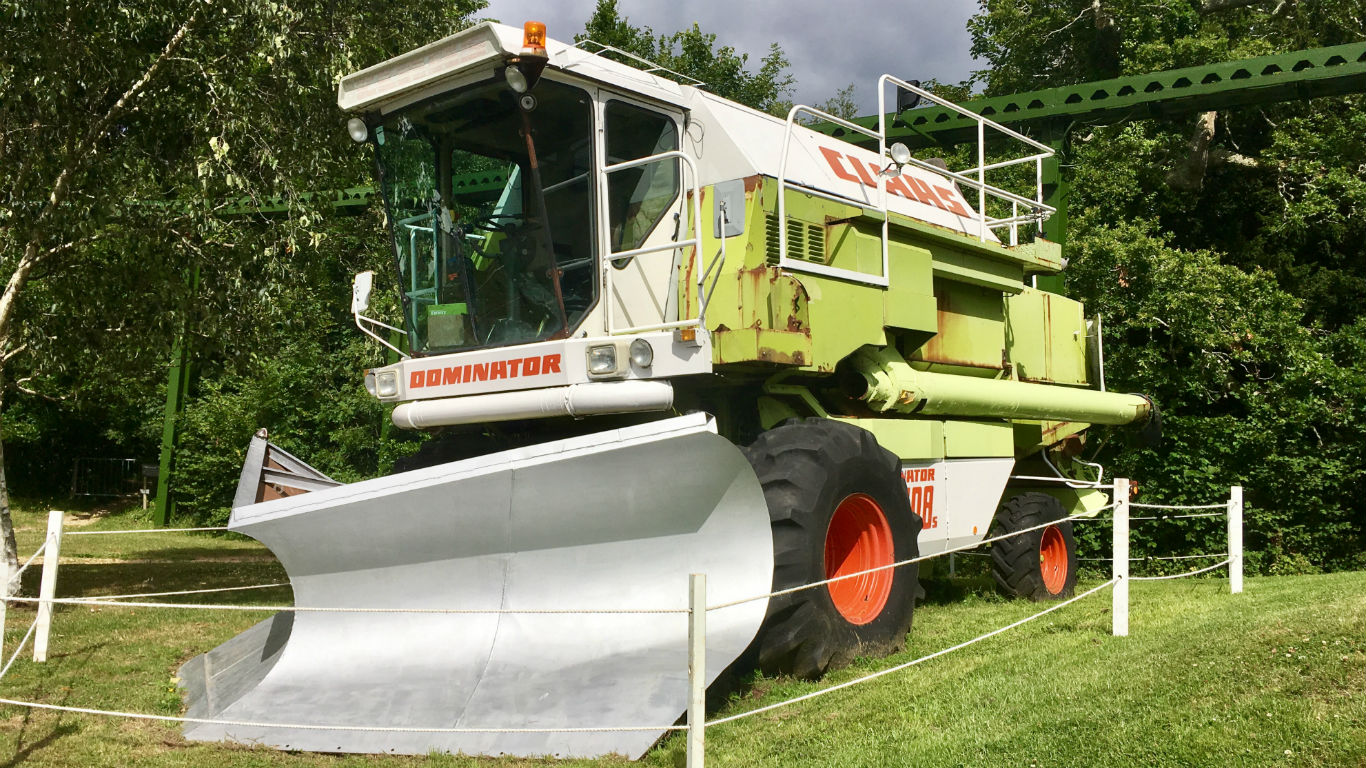 Top Gear giving something back? The – surprisingly sensible – Snowbine was a converted combine harvester, designed to remove snow from Norwegian roads.

OK, so the flamethrower on the roof was perhaps slightly ill-advised, but there’s no question the Snowbine worked. Clarkson, Hammond and May helped clear an entire road – and all without a single arson charge. 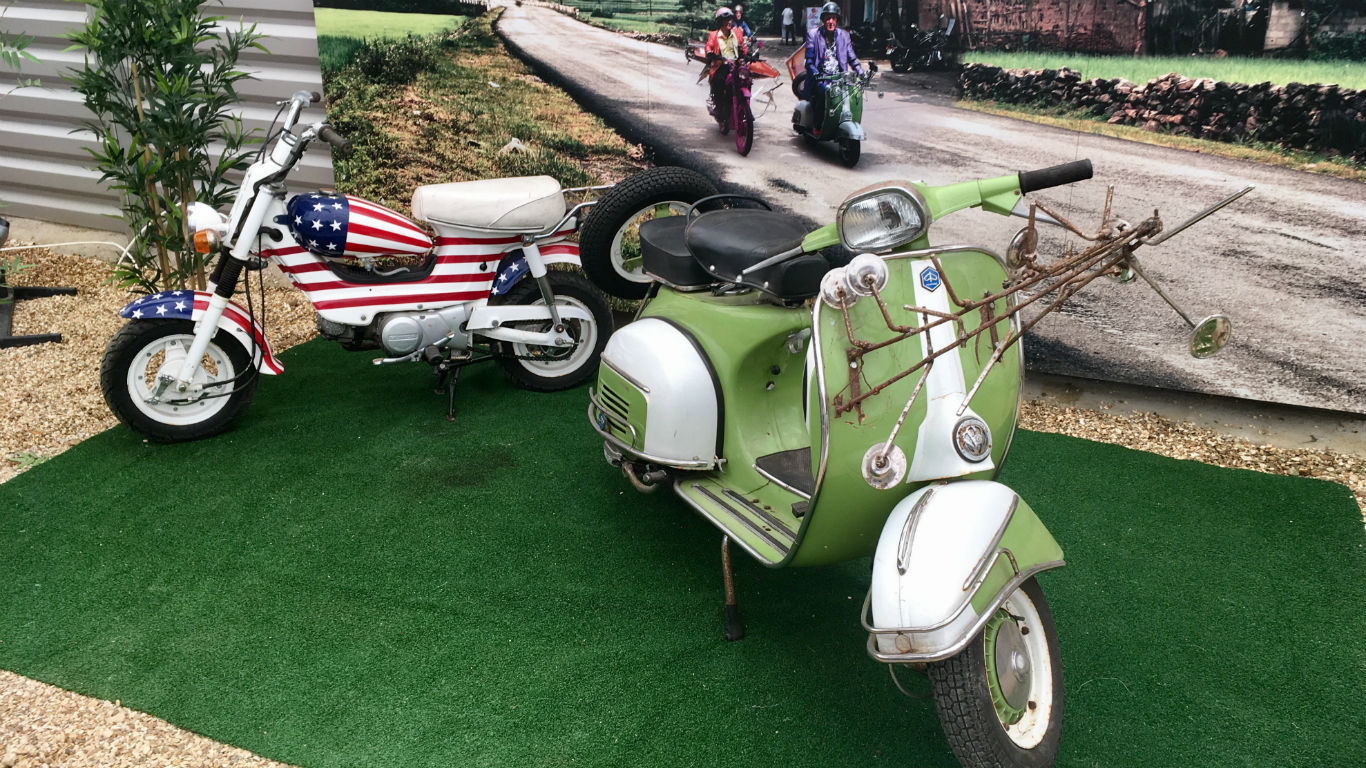 Series 12, episode eight saw one of Top Gear’s famous challenges – a journey across Vietnam on motorcycles. Displayed here are Clarkson’s Vespa scooter and the back-up motorcycle used by the TG production team. Note the stars-and-stripes stickers: controversial in a country that was once the target of US military might.

Clarkson, Hammond and May didn’t enjoy all of their Vietnam journey, but this remains one of the toughest and most memorable Top Gear challenges. 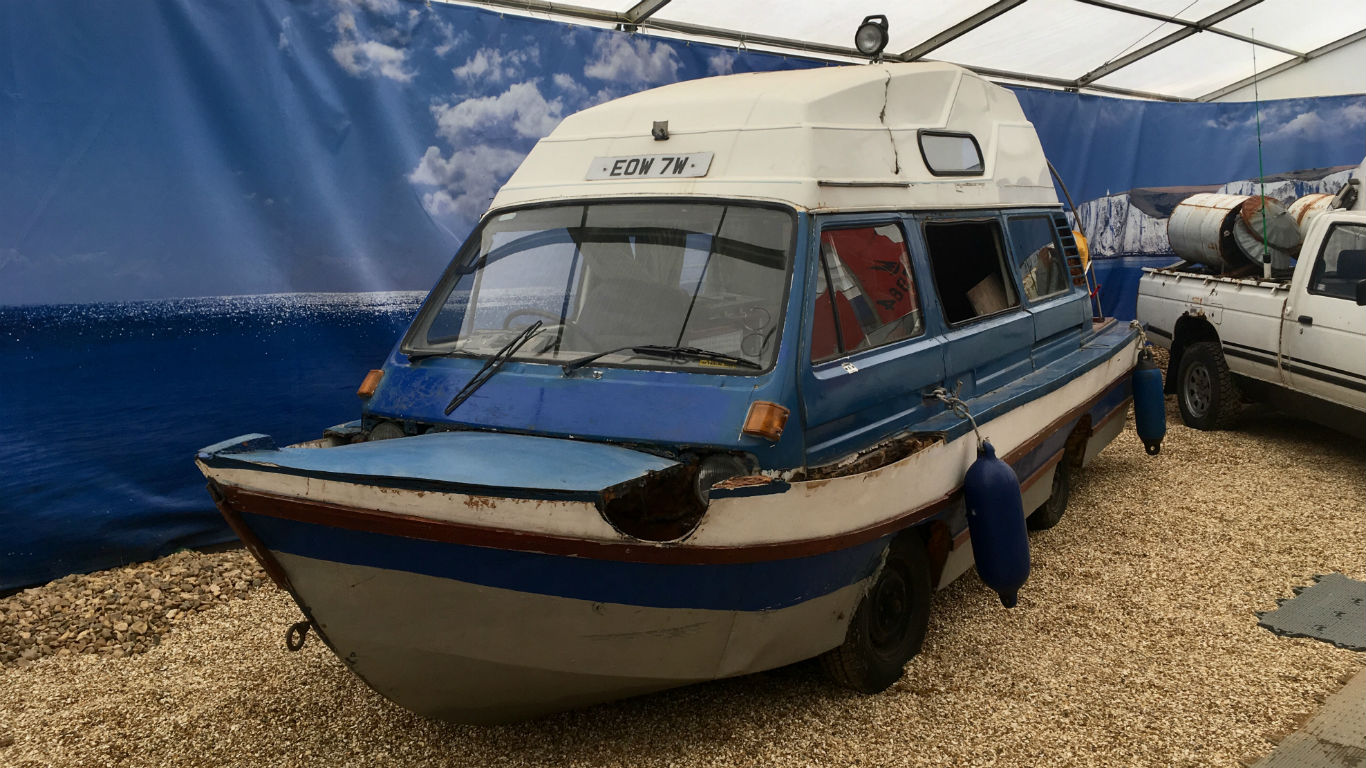 The Dampervan was another vehicle designed to cross the English Channel – this time in the hands of Richard. Essentially a Volkswagen camper inside a boat hull, it offers tea-making facilities for up to four people, plus a top speed of seven knots.

Hammond made it onto the high seas, but had to resort to an outboard motor after the Dampervan’s engine failed. It eventually sank. 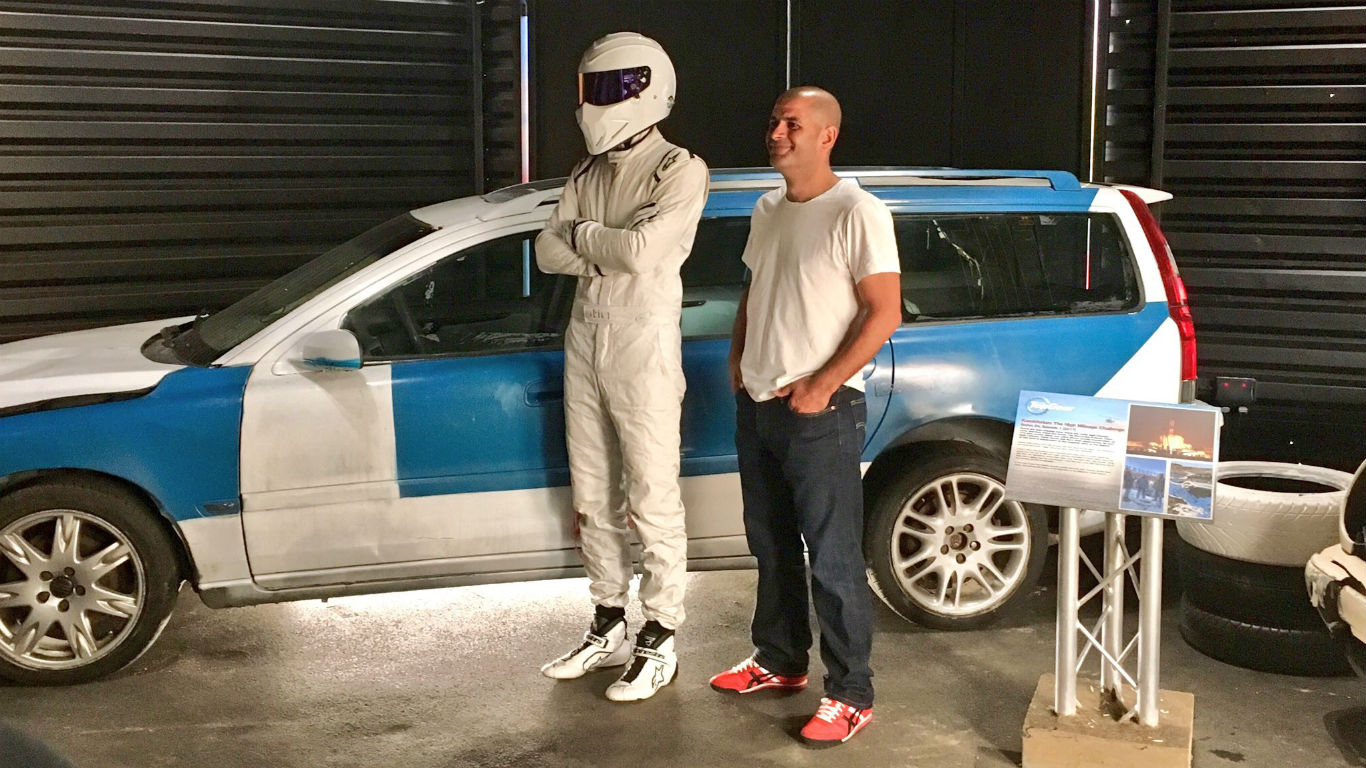 Another epic road trip, this time in the hands of Top Gear’s new presenters: Matt LeBlanc, Chris Harris (seen here – at the official launch of World of Top Gear) and Rory Reid. The team drove three high-mileage cars into the mountains of Kazakhstan.

Chris’s Volvo V70 had covered an epic 670,000 miles, but still wasn’t the leggiest car of the trio. That honour went to Matt’s Mercedes-Benz E-Class, which had more than 800,000 miles under its wheels. 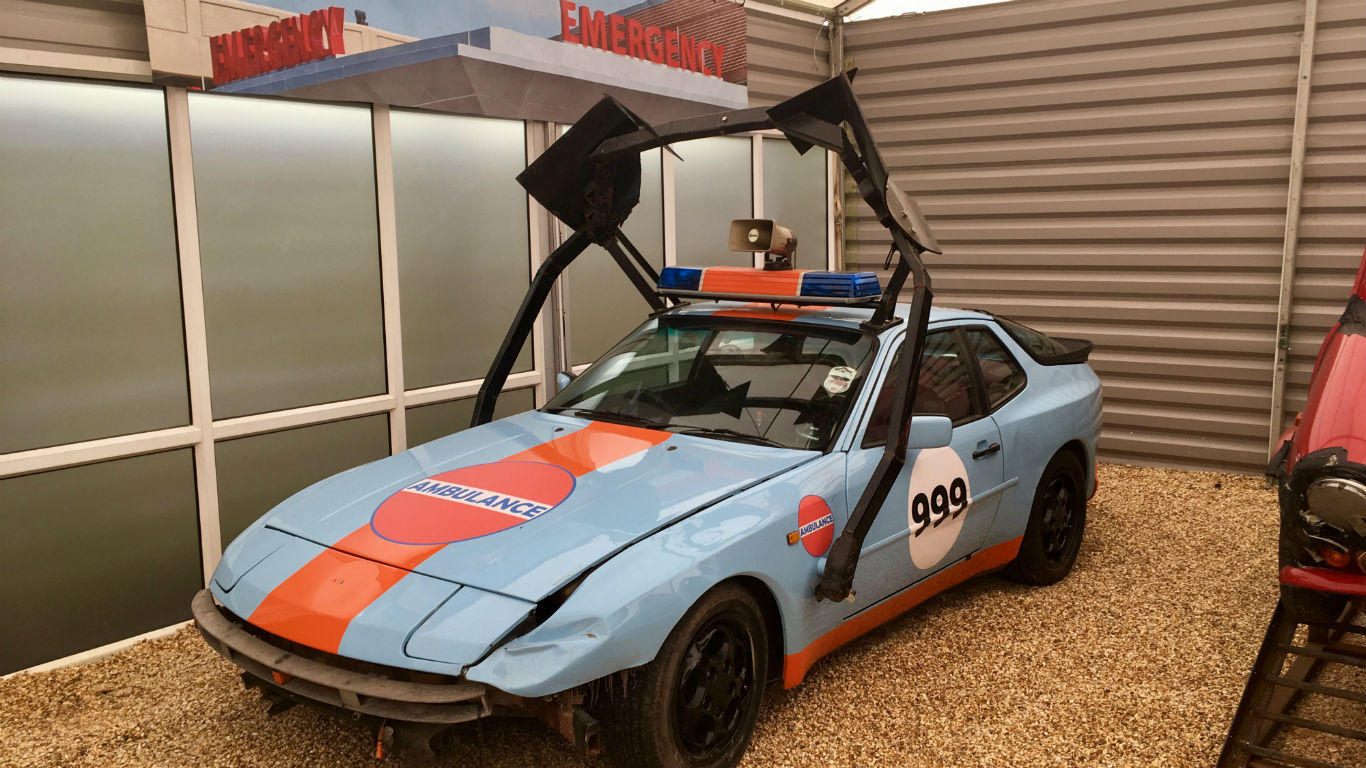 James and Richard had rather different solutions to the problem: a Ford Scorpio Cardinal hearse and an American Chevrolet G20 van, respectively. 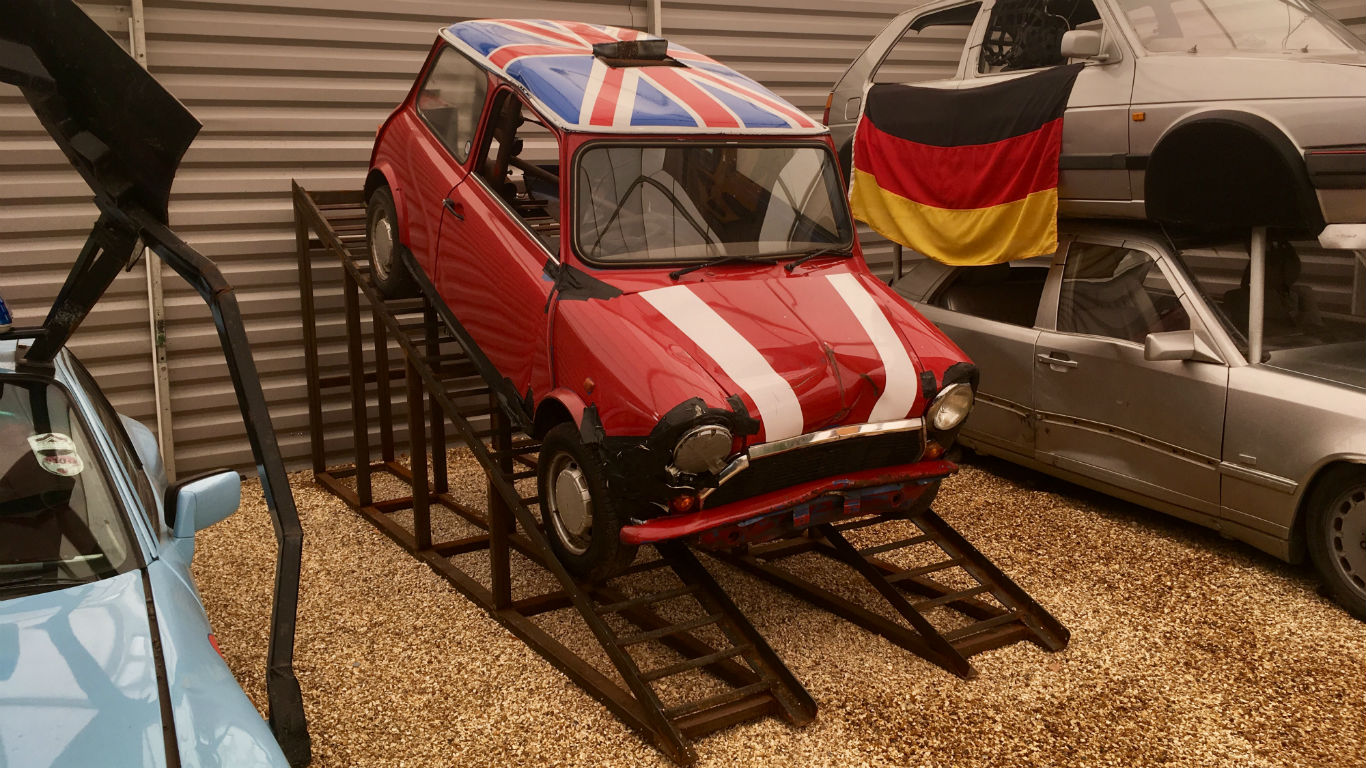 It was 2006, and the world’s top athletes were heading to Turin for the Winter Olympics. Meanwhile, the TG team staged their own version of the winter games in Norway, with events including Suzuki Swift ice hockey, speed skating versus a Jaguar XK and – the showstopper – a Mini ski-jump.

With the help of some rockets, the intrepid Mini-on-skis made the jump – as did the Stig on a snowmobile. 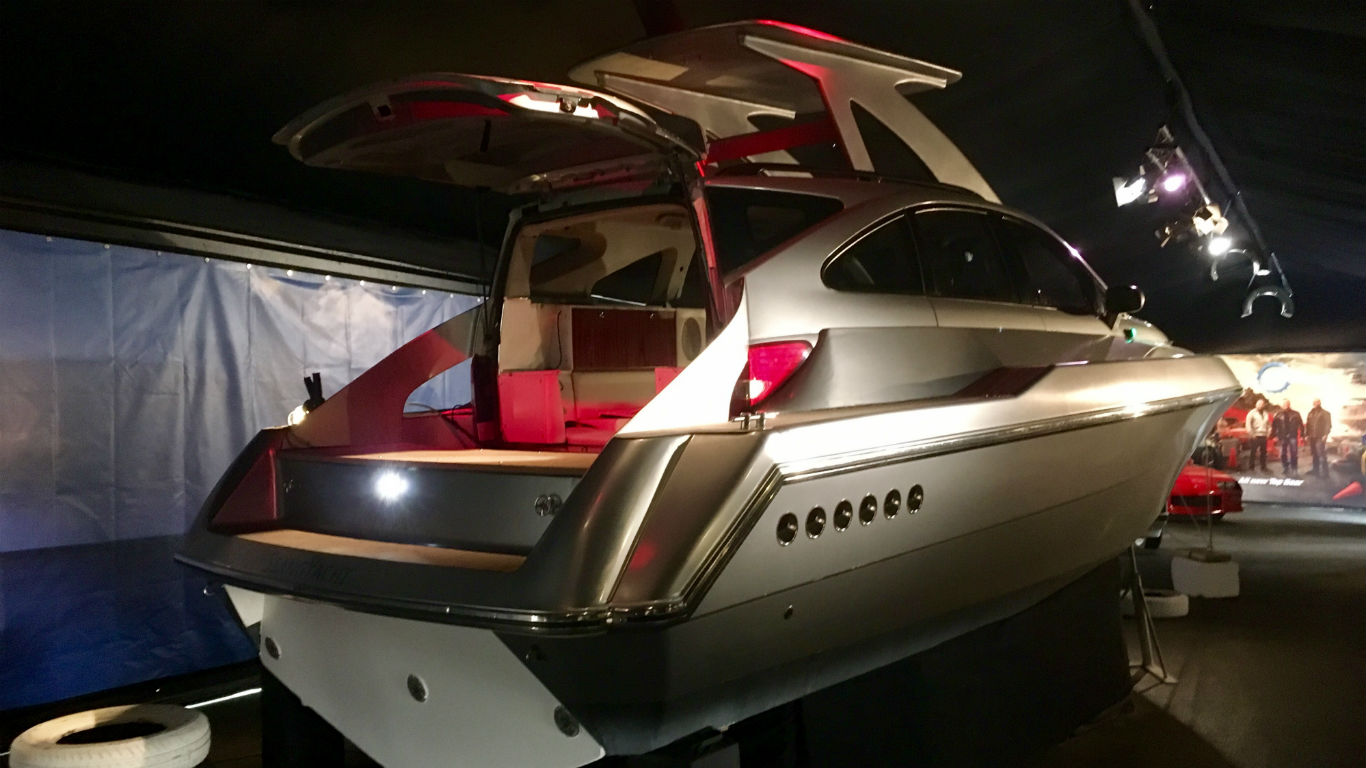 Described by Eddie Jordan as “the worst thing to happen to boating since the iceberg”, this project showed what happens when a SsangYong Rodius MPV meets a luxury yacht. Notable features include a fish tank and a keyboard for entertaining guests.

The SsangYacht’s finest moment was in glamorous Monte Carlo, where it traversed the harbour towing a water-skiing Chris Harris. 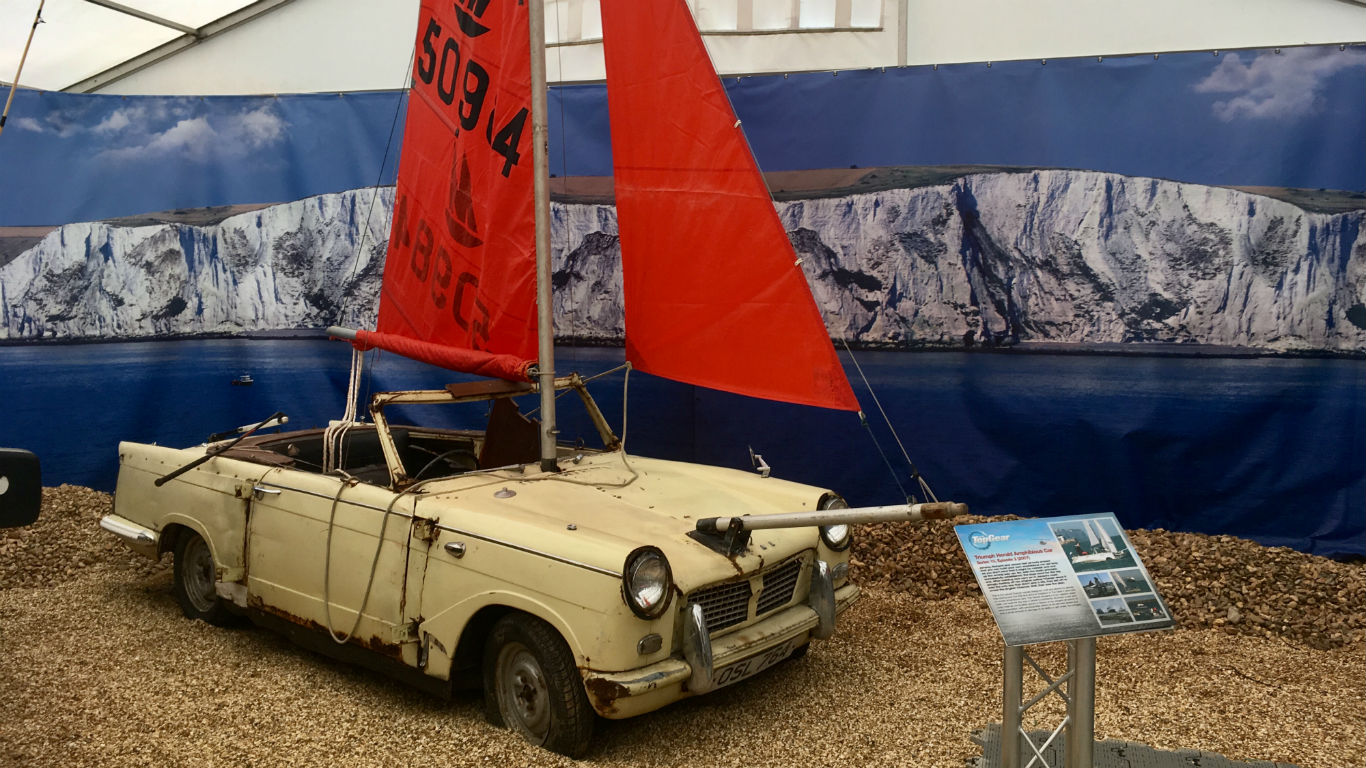 Series 10, episode two saw the second outing for James’s Triumph Herald amphibious car. And this time, it too would attempt a Channel crossing.

James kept it simple (and slow) by relying on wind power alone. Unfortunately, he was unable to sail beyond Dover harbour and the Herald soon sank. A sorry end for this hapless hero. 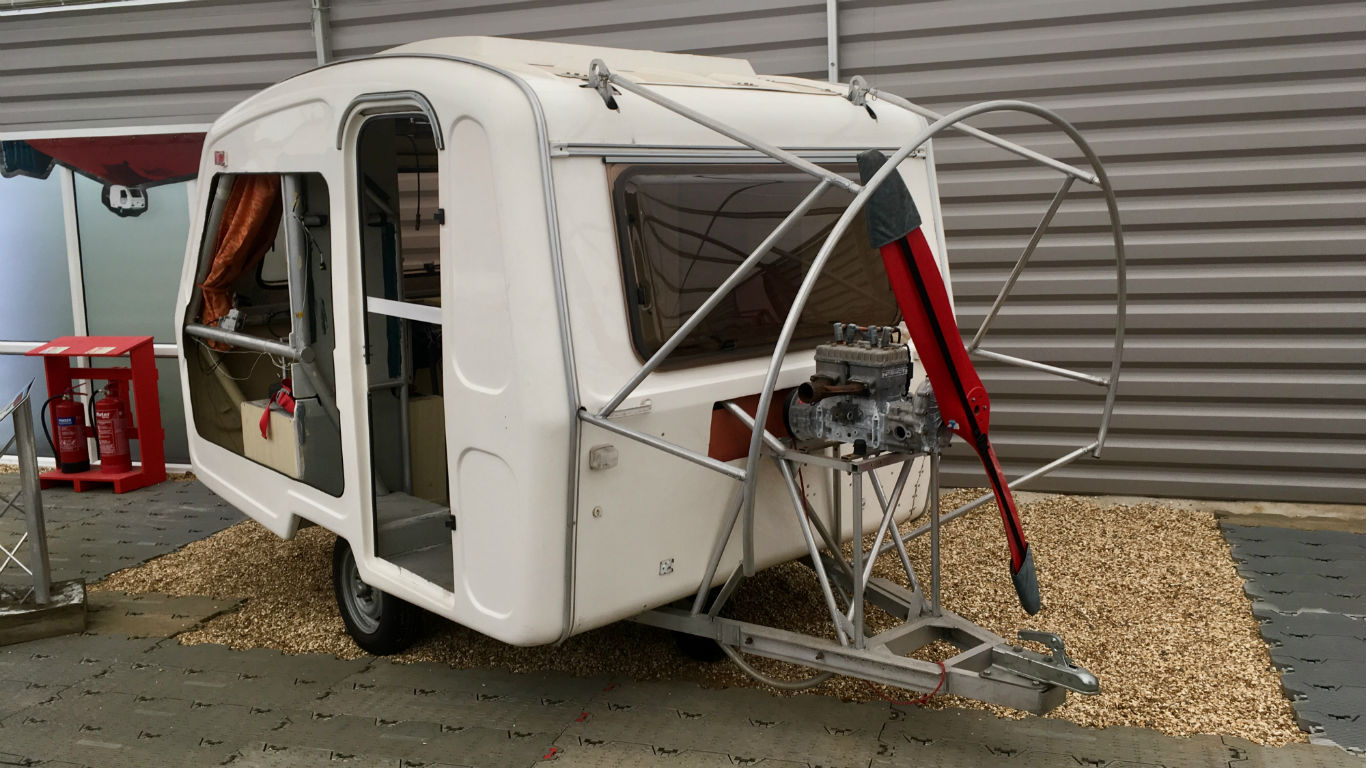 Top Gear isn’t known for its love of caravans. So James came up with an innovative idea: a hot-air balloon caravan that could eliminate traffic hold-ups – and enraged drivers – by flying from one campsite to the next. What could possibly go wrong?

Quite a lot, actually. James drifted into restricted airspace and eventually crashed through a bush. The flying caravan thus ends its days at Beaulieu – minus the balloon itself. 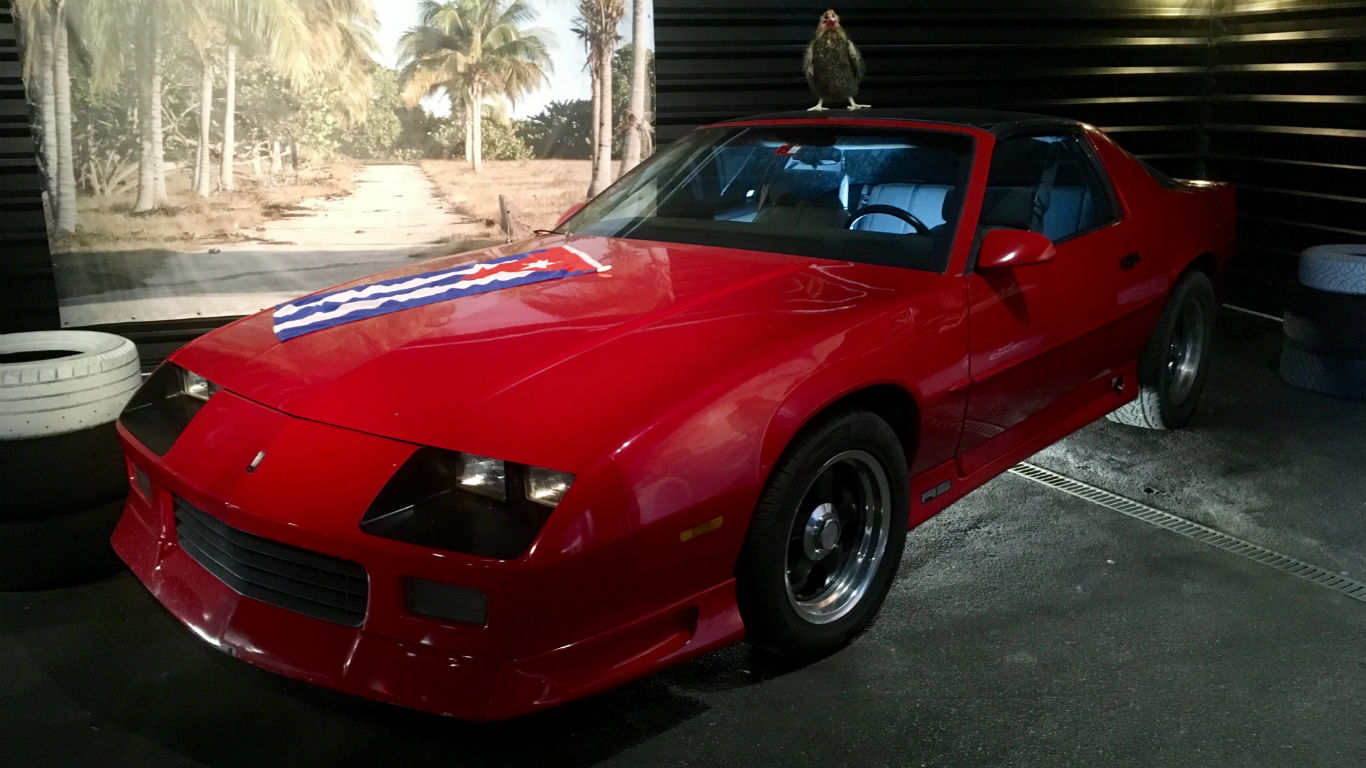 Chris Harris and Rory Reid headed to Cuba in series 24, episode six – Harris driving a ropey Maserati Biturbo and Reid in the £5,000 Chevrolet Camaro seen here. Their road-trip took them from the Bay of Pigs to Havana, with several races along the way.

Cuba has been starved of new cars for decades, so the highlights of this episode for us were the many classic American cars Chris and Rory spotted. 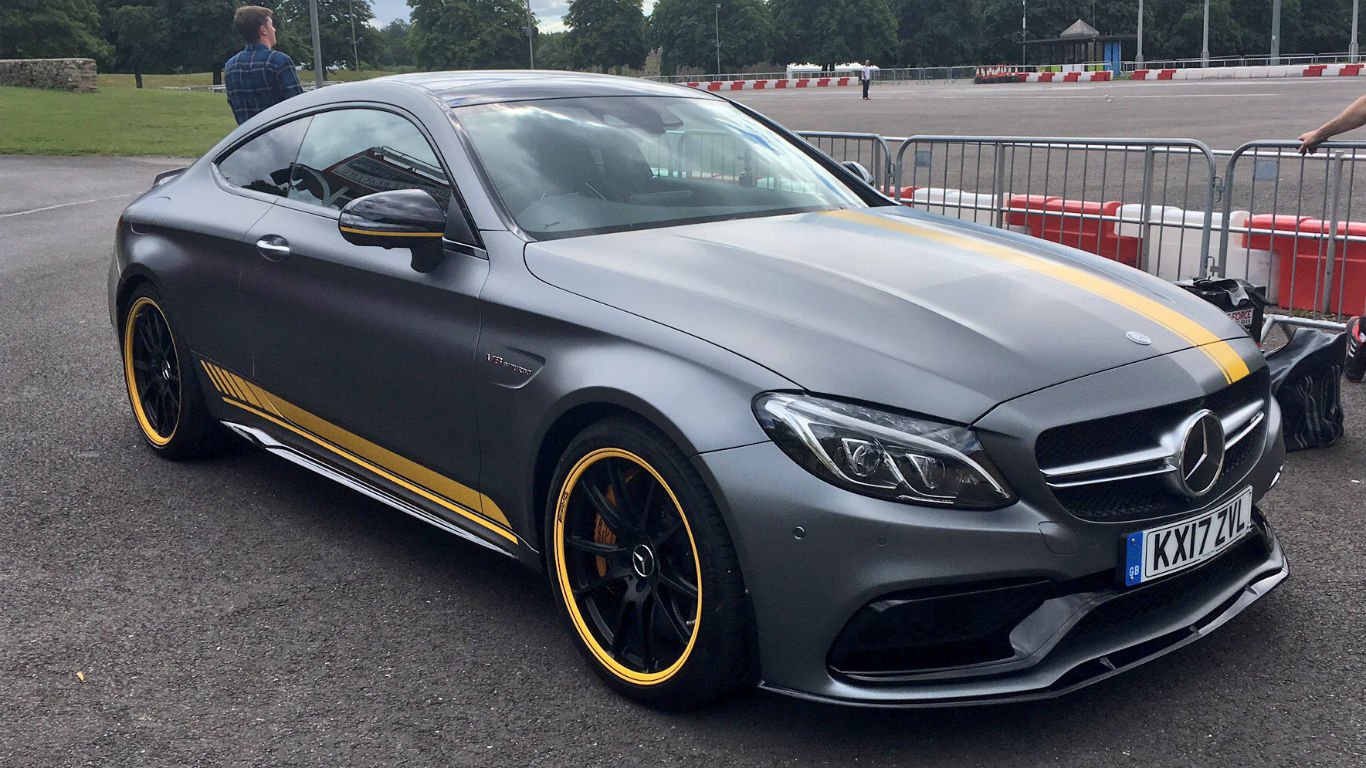 We finish with a car that isn’t part of the World of Top Gear. However, this (deep breath) Mercedes-AMG C 63 S Edition 1 was driven by Chris Harris to help launch the exhibition. And when we say ‘driven’, we mean power-oversteered until its rear tyres were squealing for mercy.

The World of Top Gear is a permanent fixture at the National Motor Museum in Beaulieu, Hampshire – open daily from 10am.