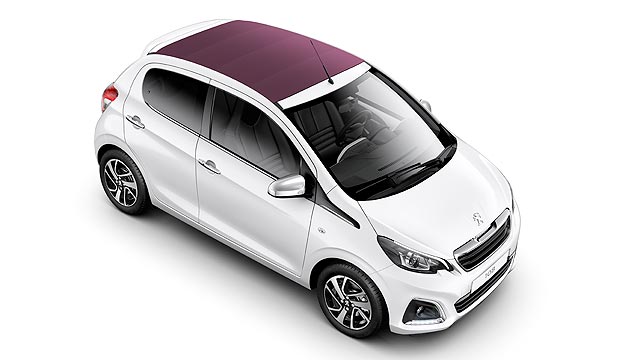 Peugeot has at last revealed the replacement for its ageing 107 city car – the all-new 108.

Once again set to spawn Citroen and Toyota siblings, the new 108 will make its debut at the Geneva 2014 motor show in March, prior to going on sale in the UK on 1 July 2014.

The fact Peugeot is launching the new city car joint venture suggests PSA has had more input into the car’s design than the largely Toyota-designed 107/C1/Aygo triplets. We don’t know much more about that at this stage, but it’ll be interesting to find out more.

One thing’s certain: the new 108 is a lot richer and more upmarket in design than the rather utilitarian old 107. The latest premium-look Peugeot design is in evidence throughout, particularly in the bejewelled front end and neat side window graphics.

You’ll also note in the images it shows a fabric roof – this is a new option for the 108, called 108 TOP! (Peugeot dictates both capitals and exclamation mark), alongside the regular 108 hatchback (offered, as with the 107, in both three-door and five-door guise).

Xavier Peugeot, Peugeot’s product director, says the new 108 marks a “move up-market” in line with its premium shift seen in other sectors. With the latest 208 and 308, it’s been pretty successful at this thus far; the new 108 suggests the trend will continue. 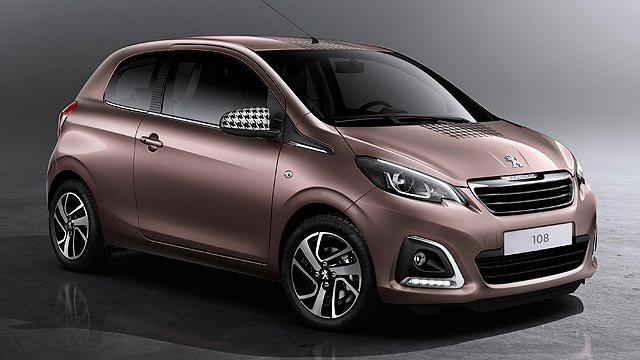 It’s still small, 3.47 metres long and 1.62m wide, and Peugeot says the overhangs have been shortened too. This gives a distinctive side profile, highlighted by the chrome bar extending from the front wings, while there’s more chrome at the front end, plus daytime running LEDs.

At the rear, we like the wraparound tail lights (Peugeot says they have a 3D effect) and we’re pleased to see the glass tailgate, retained from before, now stretches right down to the bumper for easier loading (and at up to 196 litres, the boot is now usefully bigger too: folding the split 50:50 seats extends it to 750 litres).

The press images show a pretty varied set of decal options, and this configurability is something Peugeot’s proud of. Just as a key rival, the Vauxhall Adam, has millions of options, so too will the new Peugeot 108 offer near-limitless personalisation, based around eight body colours and, on three-door models, two choices of two-tone paint.

This even extends to three roof colour choices (black, grey or red purple) for the new 108 TOP!: the roof is electric, 800mm wide and 760mm long and can be set to any position. 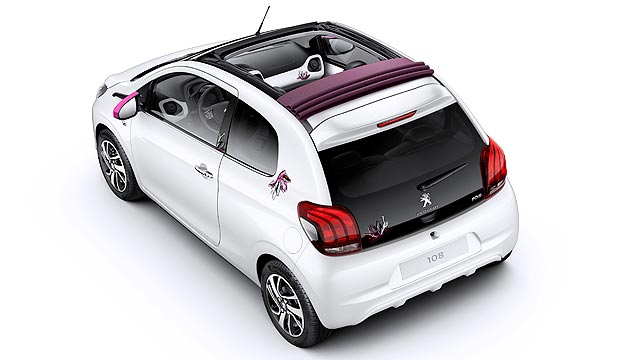 At this stage, we’re only seeing a hint of the interior, but Peugeot says it’s packed with modern infotainment connectivity based around a 7-inch touchscreen display in the dash. It’s optional on Active and standard from Allure grade up: it even offers a display that mirrors iOS, Android, Windows and Blackberry smartphone displays, using MirrorLink or AppInCar tech.

The chassis sounds similar to before, although we’re pleased to see ESP included as standard; there’s also standard tyre pressure monitoring system and Hill Start Assist on all versions too. Oh, and Peugeot fits a full six airbags as standard, along with rear seat ISOFIX. Maybe Peugeot has one eye on rectifying the Euro NCAP downgrade of the current 107.

Like the look of it? We certainly do, and will be eager to check it out in detail at the Geneva Motor Show 2014. As for Citroen and Peugeot, we await with interest what they have up their city car sleeves…