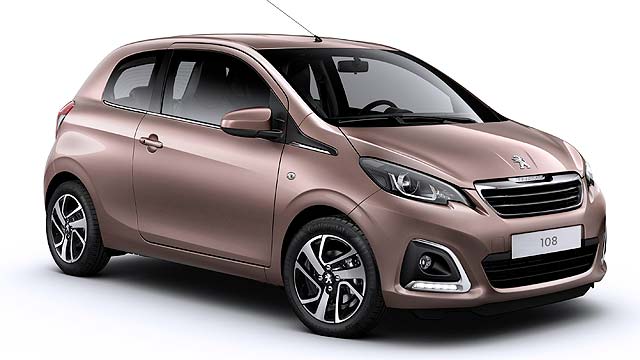 The new Peugeot 108 will cost from £8,245 when it goes on sale from 1 July – meaning it opens at exactly the same price as its sister car, the Citroen C1.

For the first time, Peugeot is offering its city car model in both regular hatch and, for £850 more, a cabrio-style ‘TOP!’ guise. Both three-door and five-door variants will also be offered.

Peugeot is also offering a second petrol engine choice for the first time: the entry-level motor remains a three-cylinder 1.0-litre 68hp unit, but there’s also now a 1.2-litre VTi boasting 82hp. All emit less than 100g/km CO2; the 1.0-litre, with engine stop-start, gets as low as 88g/km.

There’s no diesel: it didn’t sell in the 107 and the firm isn’t bothering here.

Offered in familiar Peugeot trim lines of Access, Active, Allure and Feline, all models include an impressive standard kit list including:

Active trim costs from £9,495 and adds air con, Bluetooth, DAB and a 7-inch touchscreen infotainment screen. Active is thus expected to be the best seller…

Today’s announcement from Peugeot means it’s now only Toyota from the city car trio that we’re waiting on to show its hand. As the Japanese firm both designed and builds all three cars, does it have a surprise in store?