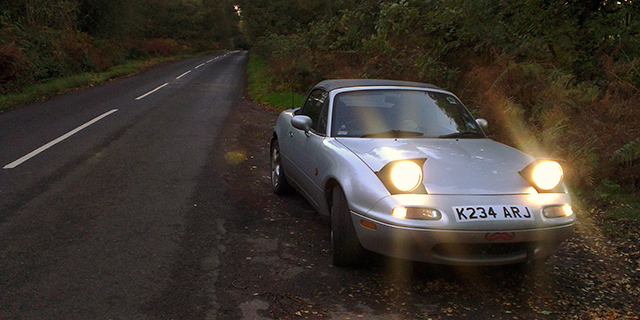 The news this week that commuting times are, on average, five minutes longer than they were 10 years ago probably won’t surprise many of us.

For me, I have a 20 mile commute, and there are two obvious routes. I can either go the slightly shorter way down the A5, or add a few miles and use the (hopefully quicker but often not) M1. Either route often results in me sitting in stop/start traffic wondering if I should have bought a sensible automatic rather than a leaky MX-5.

On Friday, I decided it was time for a change. I’ve only just moved to the area and haven’t had chance to explore the local maze of B-roads, but if I turn left out of my street and keep heading kind of south, I should get to work. Avoiding congestion.

The plan was a good one. The first stretch I had to myself – until I came face-to-face with a deer. Not a problem, I wasn’t pushing on so stopped without any locked wheels (ABS? Pah…) but it scarpered off before I managed to grab a quick picture.

The route was hillier than I imagined – but that meant stunning scenery across Bedfordshire as the sun came up. As an alternative to Dunstable’s endless traffic lights, this was brilliant.

It all went a little wrong when I realised I’d missed a turn somewhere and was nearly in Hemel Hempstead – as a congestion-beating plan, this was bad. My sat nav packed up a few days ago and Google Maps was telling me I was in the middle of a forest, miles away from any roads.

So, I had to use a device that my parents once told me about but I’ve never really used. It’s called a map – remember those? A cross-country flit and I was back on track, and nearly at work.

All in all, the commute took around the same time as it would normally – and should be even shorter if I avoid getting lost next time. So, I’m guess what I’m saying is, if your commute drives you nuts, buy a cheap MX-5 and make your commute fun.

How’s that for consumer advice?