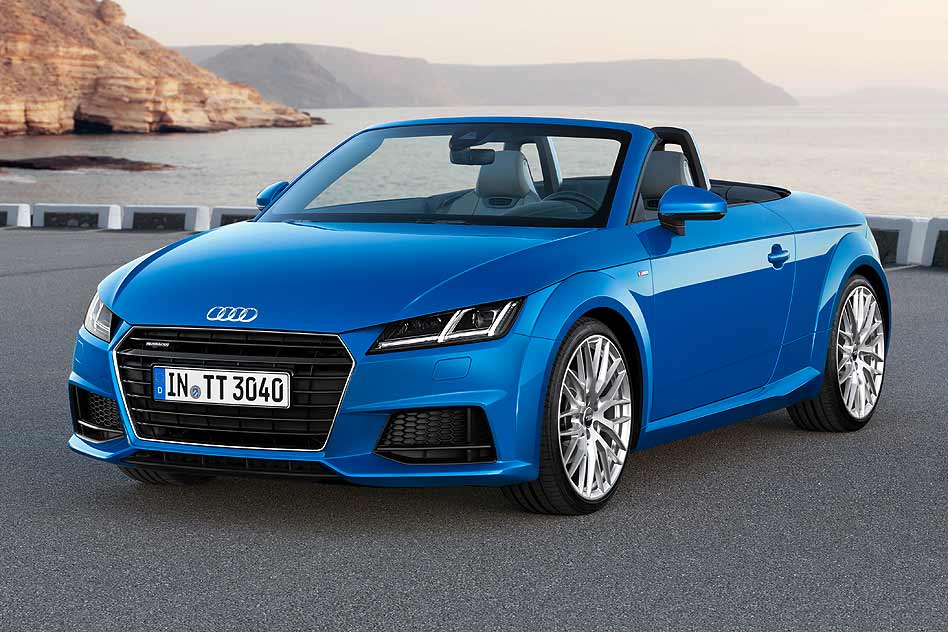 Audi has revealed the new open-top Roadster version of the new TT prior to its public debut at the Paris Motor Show 2014 next month.

Audi will offer the TT Roadster in regular and TTS Roadster guise, using the same 2.0-litre TFSI 230, 2.0-litre TFSI 310 and 2.0-litre TDI ultra 184 engines as the TT Coupe. Front-wheel drive and quattro are available, as are the same manual and S tronic gearboxes.

The new TT Roadster continues the evolutionary look of the TT Coupe but boasts a flatter, more elegant rear than the current car, particularly roof down with the classic-look rollover hoops exposed. Details such as the now-hidden third rear light and less dumpy overall appearance mean the transformation over the old TT Roadster is perhaps more obvious here than it is with the TT Coupe.

Unfortunately, Audi hasn’t yet shown what the new TT Roadster looks like with the roof up, but does reveal a class-leading drag coefficient of 0.30 with it raised. The roof takes 10 seconds to go up and down, at speeds of up to 31mph. Audi says the 280-litre boot capacity is unchanged with the roof down.

Handling should be aided by the roof weighing 3kg less than the old car, which will benefit the car’s centre of gravity. The acoustic roof of today’s TT Roadster is fitted as standard – but it’s duly enhanced and is now up to 6 dB quieter than the current car.

Body stiffening is added by struts both beneath the car and within the aluminium-steel body itself; despite this, it’s 39kg lighter than the old car. Unladen weight starts from 1320kg, or a manageable 90kg heavier than the coupe.

Audi reveals a key change is a solid wall between the cockpit and boot, which replaces the bottom cross member of the TT Coupe – but this still features through loading functionality for added practicality. The aluminium A-pillars have an additional steel pillar mounted within them, which itself contains a solid steel tube. We are thus expecting a much more torsionally rigid car than the current TT.

It features the same driver-focused virtual cockpit as the TT Coupe – Audi’s clearly solved any issues with sunlight glare on the all-digital dial display – whose 12.3-inch display is fully configurable.

New seats with single-piece backrests are mounted lower than before, keeping occupants’ heads away from the roof-down wind blast; they’re also a substantial 5kg lighter than the current car’s seats.

Audi hasn’t yet revealed prices or an on-sale date for the TT Roadster in the UK, but the core range will go on sale in Germany as soon as it is debuted at the Paris Motor Show 2014 on 2 October; the TTS Roadster will follow in January 2015.