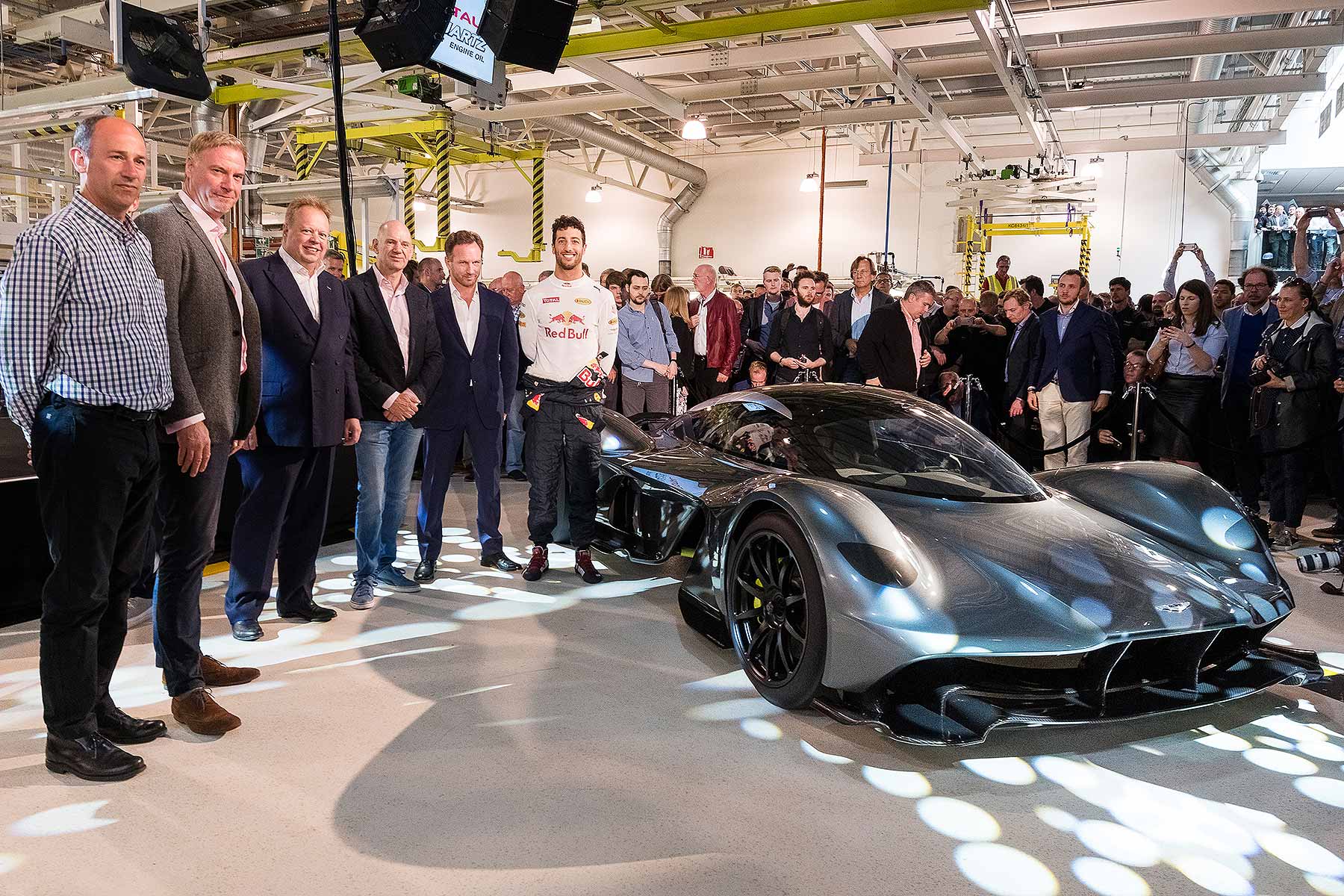 Adrian Newey used to sketch cars as a six-year-old. Some of them were racing cars and they’ve defined his career. Just as many were road cars though – yet up to know, this brilliant automotive engineer has never designed one.

The Aston Martin Red Bull AM-RB 001 puts that right. A dream Newey’s harboured for a lifetime is becoming a reality at last.

Speaking at the launch of the car at Aston Martin Gaydon, Newey revealed his dad was a proper petrolhead “so I was always with sports cars as a child”. The bug rubbed off on young Newey and he’s perhaps been formulating his ideas ever since. Finally, last summer he had the chance to start designing one, when the bulk of his F1 duties were handed over; indeed, that’s when he started doing the initial engineering studies for this very car.

You almost sense it’s Newey himself, rather than Red Bull that’s been so eager to push this forward. Red Bull’s job was to make it happen and, as team boss Christian Horner said, “realise a dream for Adrian”.

The Aston Martin involvement came later – over a sausage and mash pub lunch in January 2016, revealed CEO Dr Andy Palmer. He was friends with Newey and Horner from his time at Nissan, when Infiniti was a Red Bull partner; now at the helm of Aston, what a timely lunch between old pals it was – the decision to go ahead with a joint venture was quickly agreed and the two brands could get to work.

Newey admitted he was designing his concept “blissfully unaware of homologation”: F1 has a rule book but he’d never had to follow the automotive equivalent before. Enter Aston Martin designer Marek Reichman’s team, who had the happy job of making Newey aware of this – but, he adds, “instead of just saying ‘here are the regulations’, they were keen to work with me and say ‘let’s try to find a way around them’. That’s just like F1.” 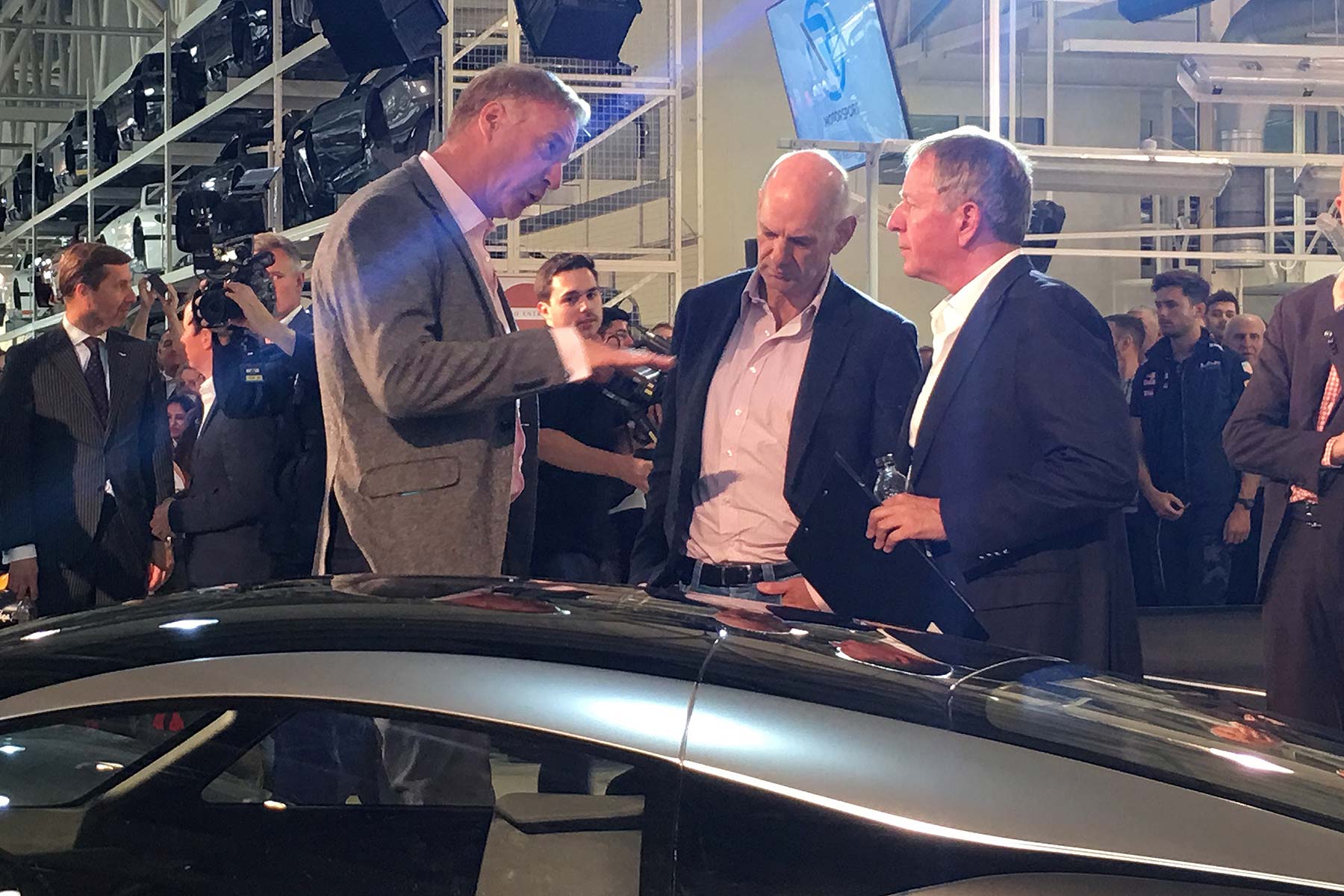 Newey is not following the recently-established route of extreme hypercars though. In a pointed reference, he notes to us the McLaren P1 and LaFerrari both weigh 1.5 tonnes, whereas the AM-RB 001 is likely to come in 50 per cent lighter.

“The ideas behind this car are almost in the opposite direction to the P1, LaFerrari and others. It’s much smaller and lighter – pure, simple with tight packaging and an advanced aerodynamic concept.” He tells us to look at the supercar run times at Goodwood: what’s often one of the fastest cars there, in a paddock full of P1s and LaFerraris? Why, the Noble M600 – “because it’s small and light”.

Indeed, this is why the AM-RB 001 isn’t getting a turbocharged power unit – because the need for lots of cooling would have spoiled Newey’s aerodynamic ideas. A V12 is more compact and easier to package, while also providing all the interstellar power he needs (think 1,000hp…). He dismissed a V10 because the cylinders would be too big and it would have too much vibration, he added: similarly, that’s why a V8 was eschewed. 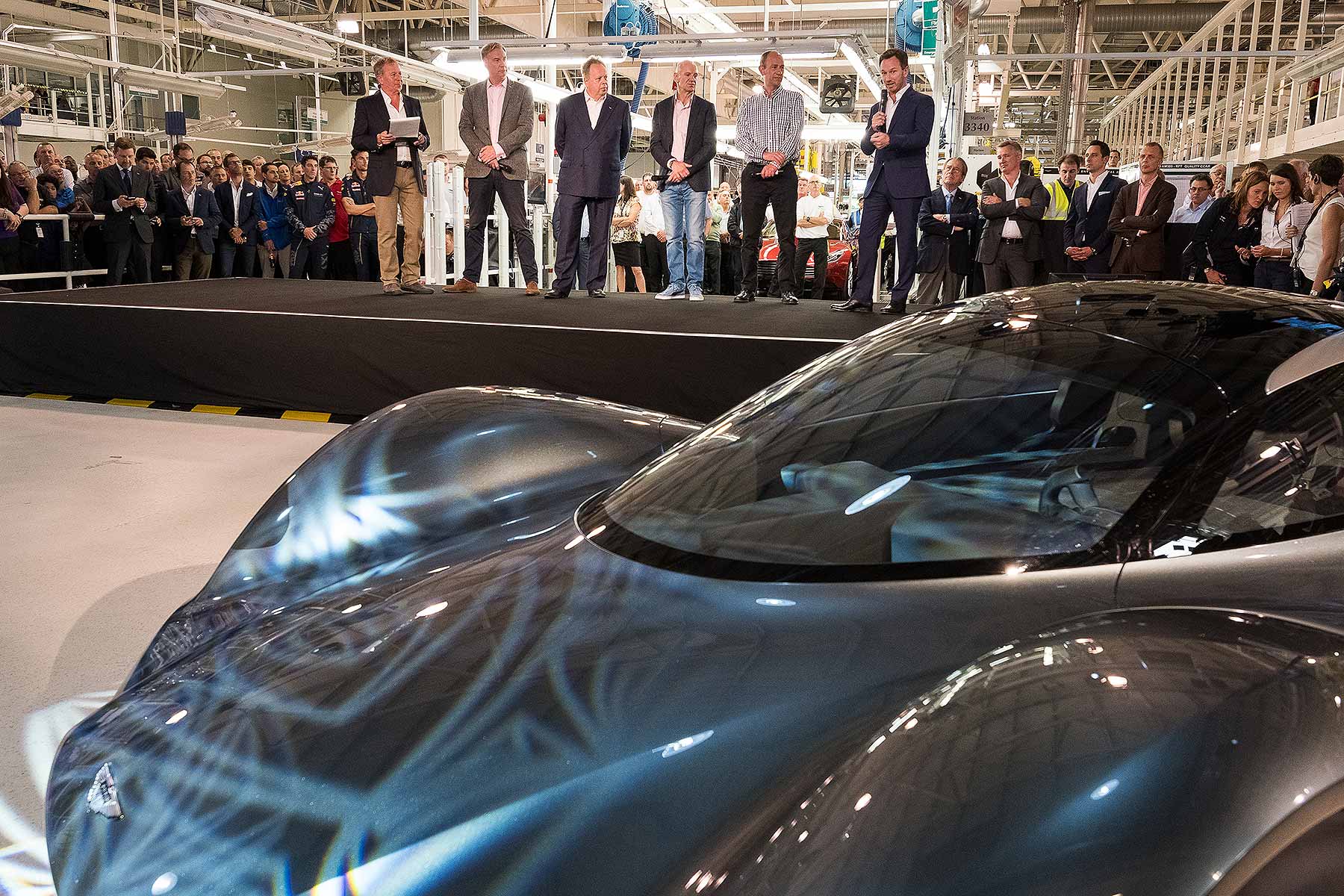 But while Red Bull is doing the engineering of the car, including creating a brand-new, completely bespoke vehicle architecture, Aston Martin’s role is crucial. The sports car company is responsible for creating, producing and delivering Newey’s vision to market, a formidable task that has already led to several ‘interesting’ emergency meetings and discussions. “Adrian keeps on pushing,” says Dr Palmer, but nobody’s expecting anything less. This is Adrian Newey, after all.

And it’s this intensity from Newey that will drive Aston Martin to deliver everything he demands and more – using the full might of its road car engineering resource to make the racing car legend’s first road car something equally mighty. No wonder Dr Palmer said the launch of the car “is the day that sends a signal to the rest of the industry that the transformation of Aston Martin is real: we’re serious, and our competitors should watch out.”

The potential of the Aston Martin Red Bull AM-RB 001 is indeed truly immense. It has formidable talent behind it, near-endless resource and the will of two renowned companies to make it work. It’s going to be a fascinating project to follow, particularly if you’re Ron Dennis mused Christian Horner (“I bet he’s spitting his coffee out as we speak,” he mused…).

How could the road car that Adrian Newey’s been dreaming about for 50 years be anything else?