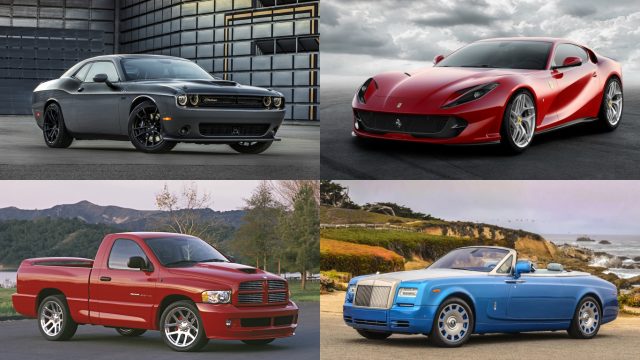 In a world obsessed with downsizing and turbocharging, the romance of fitting a car with the biggest possible engine seems to have been lost. We take a look at 25 of the largest displacement motors ever built for road use – and the cars they were fitted to. This is all about big-block motoring; you need in excess of six litres of displacement to join this club. 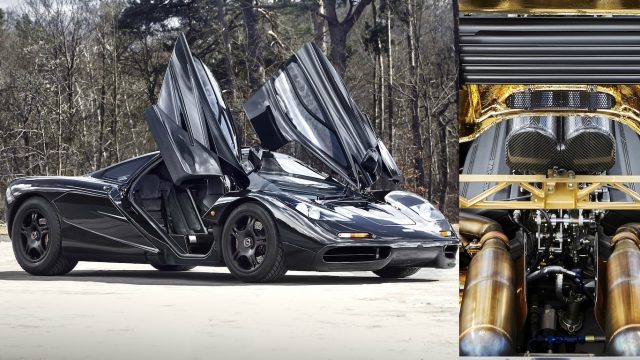 There probably aren’t many lists where a McLaren F1 is found at the bottom. But when it comes to displacement, the Big Mac isn’t top of the pile. That’s not to say the BMW S70/2 engine isn’t impressive, even if those being unkind might refer to it as two BMW M3 six-cylinder engines bolted together. Yet 627hp is clearly nothing to be sniffed at, and was more than enough to make the F1 the fastest production car in the world, with a top speed of 240mph. It also had an engine bay lined with gold, which automatically makes it cool. 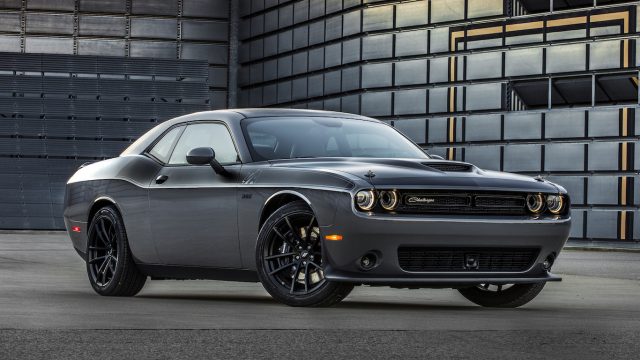 American V8 engines are common in this list, and this latest motor from Chrysler proves the USA is still in love with big-block power. The Hemi name is derived from the hemispherical cylinder head design, which Chrysler first started using in 1951. This latest third-generation Hemi has been built since 2003, and is fitted to the Challenger, Charger and even the Jeep Grand Cherokee in 6.4-litre form. An output of 485hp (plus 475lb ft of torque) makes the Challenger T/A rather rapid. 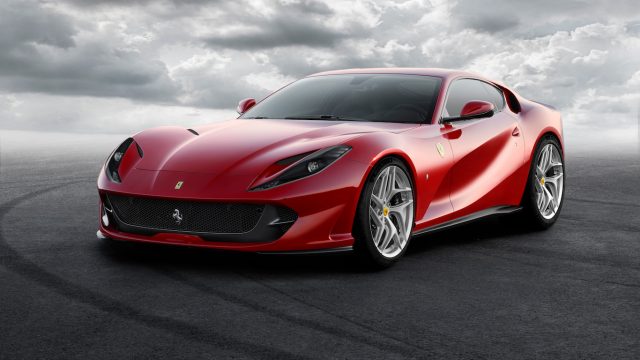 Aside from the V12 found in a rare Can-Am racer, this is the biggest engine Ferrari has ever produced. Which is apt for a car badged ‘Superfast’. The Tipo F140 family of engines has previously appeared in the Ferrari Enzo, Maserati MC12 and LaFerrari. But, at 6.5-litres, the version fitted to the 789hp Superfast displaces the most. 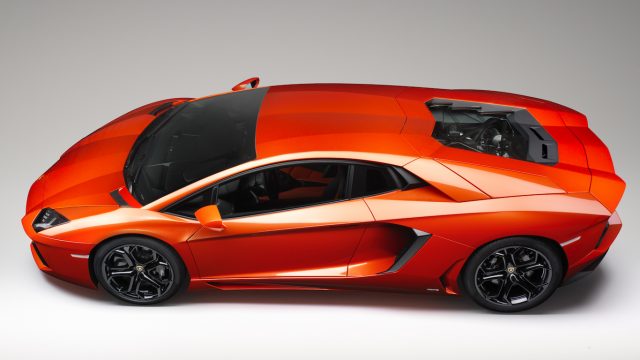 Lamborghini doesn’t like to change things much when it comes to engines. This 6.5-litre unit is only the second design of V12 in the history of the company, with the original version in use from 1963 to 2011. Built for the Aventador, it weighs a whopping 235kg alone, and is good for 690hp and 508lb ft of torque. The key question is whether Lamborghini will choose to go even bigger to stay ahead of Ferrari on size… 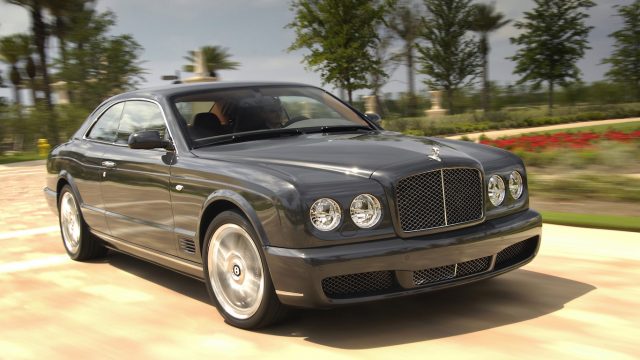 Even older than the first Lamborghini V12 is this Bentley V8, which can trace its lineage back to 1959. The 6.75-litre version first appeared in 1968, and has powered a number of Rolls-Royces and Bentleys in the decades since, including this Brooklands Coupe. Here, it produced 530hp and a tyre-shredding 774lb ft of torque. Top tip: be sure to refer to this engine as a six and three-quarter, rather than six-point-seven-five litres. It is British after all. 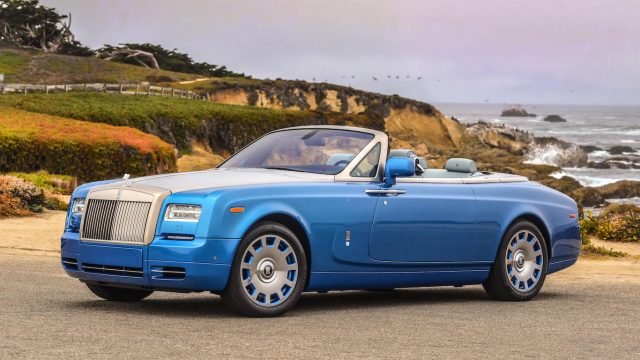 Don’t be fooled. Although it might share the same displacement, this V12 has nothing to do with the Bentley engine, having been created by BMW. Munich had originally planned to endow the Phantom with a V16, but switched to a smaller V12 for production. With 454hp and 531lb ft of torque, this engine majors on smooth and unflustered progress, rather than racing to its 6,500rpm redline. 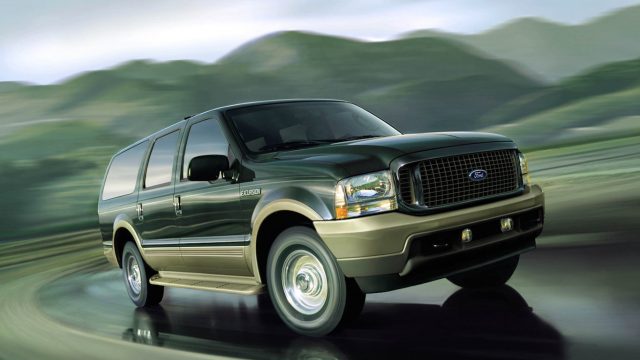 Even by American standards, the Ford Excursion was a vast SUV. Sharing a platform with the F-250 Super Duty pick-up truck means a kerb weight of almost 3,300kg, and seating for nine passengers inside. It therefore needed a suitably huge engine: a 6.8-litre version of Ford’s Triton V10. With average fuel economy in the low teens, the Excursion became a victim of rising fuel prices and a controversial image. 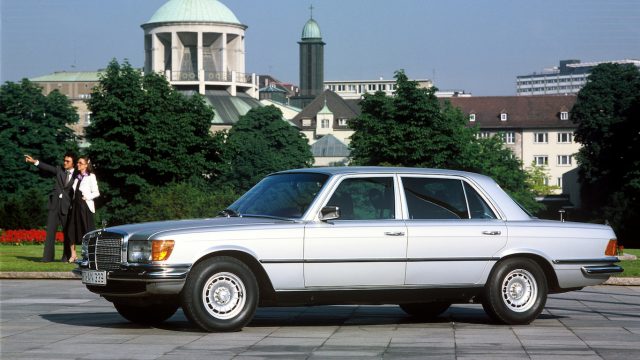 It might look unassuming, but back in 1975 this was the ultimate performance Mercedes-Benz. Based on the long-wheelbase version of the S-Class, the 450SEL 6.9 used an enlarged version of the M100 V8 engine fitted to the earlier 300SEL 6.3. Peak power of 282hp may seem tame today, but it enabled the 6.9 to hit 0-62mph in seven seconds and a top speed of 140mph – even with a three-speed automatic gearbox. It was also the first Mercedes to feature hydropneumatic self-levelling suspension, with the driver able to lower the ride height from the cabin. 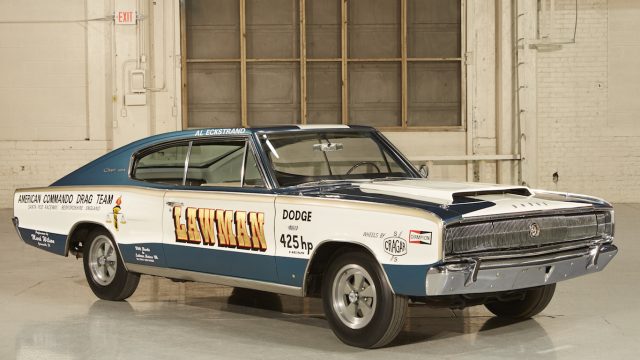 In muscle car folklore, the 426 Hemi V8 holds a very special place. Essentially a NASCAR race engine sold for street use to meet homologation requirements, the 426 was nicknamed the ‘elephant engine’ for its size and power. Offered as an expensive option for a range of Mopar cars, around 11,000 were produced between 1966 and 1971, including the ’68 Charger R/T drag racer pictured here. As noted on the side, power output was 425hp. Today, original 426 Hemi-equipped cars command substantial sums at auction. 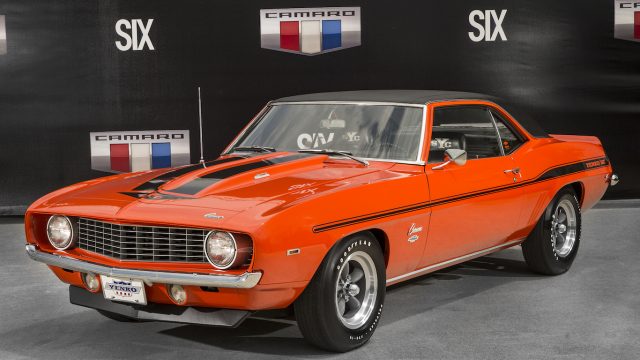 When first launched in 1967, General Motors ruled that the first-generation Camaro could not be fitted with an engine larger than 400 cubic inches (6.6-litres). This placed the Camaro at a disadvantage against key rivals. However, certain dealerships – such as that ran by Don Yenko – would install a Chevrolet 427-cubic inch engine from the Corvette. Once Chevrolet became aware of this, it offered a Central Office Production Order option in 1969, allowing Camaros to unofficially come from the factory with the 450hp 427 V8. 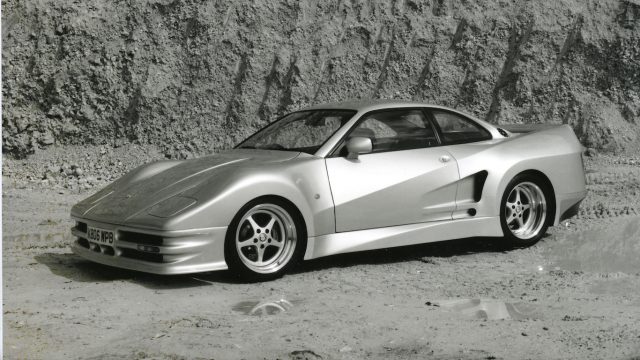 It may be relatively unknown, but the Lister Storm gained a number of accolades when unveiled in 1993. Its Jaguar engine was developed from a Le Mans racer, and was the largest V12 fitted to a road car since World War II. With 546hp and 580lb ft of torque, it also held the record of being the fastest four-seater car in the world, with a top speed of 208mph. Just four road cars were built, with the Storm also taking to the track at Le Mans and in the FIA GT Championship. Curiously, in 1996 the Storm race car was sponsored by Newcastle United FC, although the partnership failed to produce success. 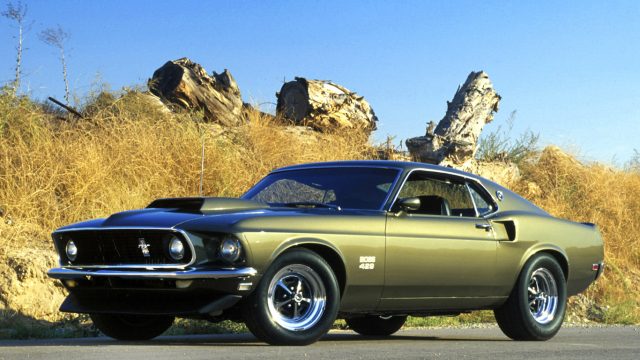 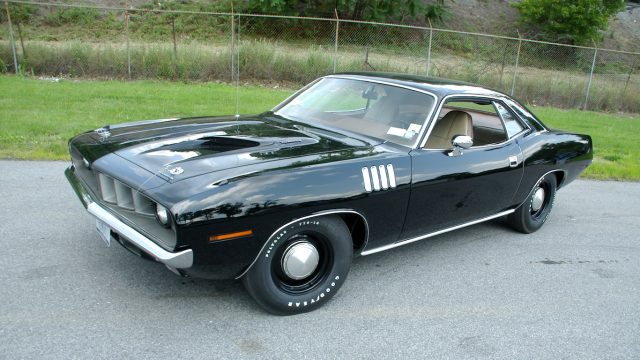 The 426 Hemi may have been the most powerful, but the 440-cubic inch version was the biggest, and thus ranks higher on our list. It was also far more common, with more than 20 different Chrysler corporation models making use of it between 1965 and 1978. The peak for the 440 was from 1969 to 1971, when a version with six carburettor barrels was offered, resulting in 390hp. Debate still rages between Mopar fans as to whether the 440 or 426 Hemi makes for the best choice. 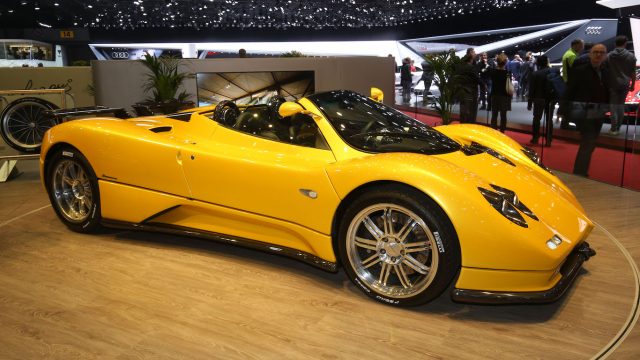 Pagani has famously made use of Mercedes-AMG engines from the outset, with the current Huayra using a turbocharged 6.0-litre V12. But the biggest Pagani motor was used in the Zonda S, which gained a 547hp 7.3-litre version of the naturally-aspirated M120 AMG engine in 2002. A roadster version followed in 2003, making it even easier to enjoy the sonorous sound of the V12. 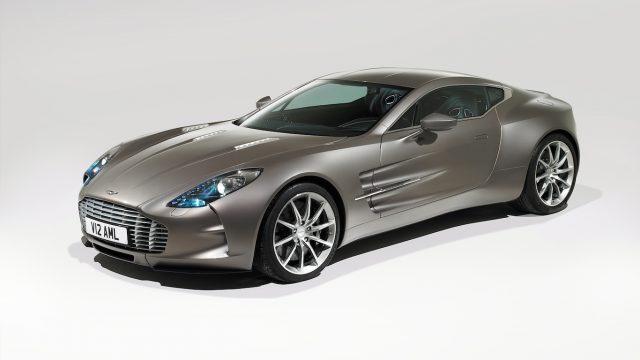 Billed as the most powerful naturally-aspirated production engine in the world when launched, the 7.3-litre V12 fitted to the One-77 is rather special. With 750hp, the flagship Aston was capable of hitting 0-62mph in 3.7 seconds, with a top speed in excess of 220mph. Only 77 examples were built, with prices above £1.1million for the hand-built carbon fibre creation. 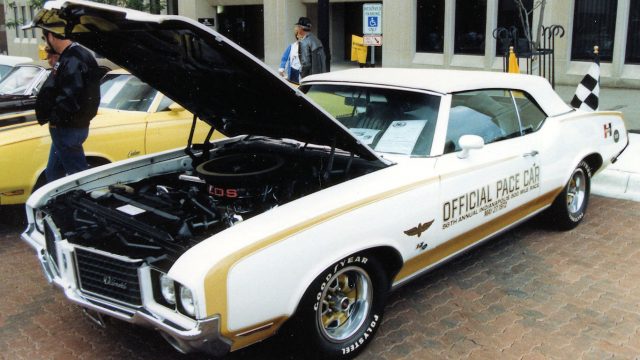 With name like ‘Rocket’ there should be no doubting the intentions of the 455-cubic inch engine used by Oldsmobile between 1968 and 1978. Most notable is its use in the 390hp Hurst/Olds, a collaboration between Oldsmobile and Hurst Performance that is often overlooked by muscle car fans. It was at good enough for the Hurst/Olds to be picked as pace car for the 1972 Indianapolis 500. 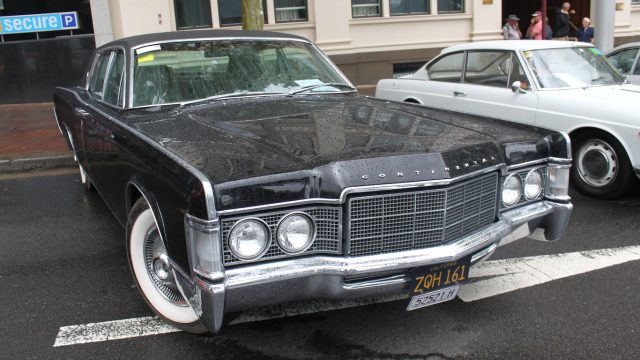 The fourth-generation Continental, featuring wondrous ‘suicide’ rear doors for the sedan, is perhaps the most recognisable version of the big Lincoln. But by 1966, with the Continental expanding rapidly in size, power needed to increase. The answer was a 462-cubic inch V8 variant of the Ford MEL engine, tuned to deliver big torque at low revs to shift the giant Lincoln, which weighed in at up to 2,600kg. 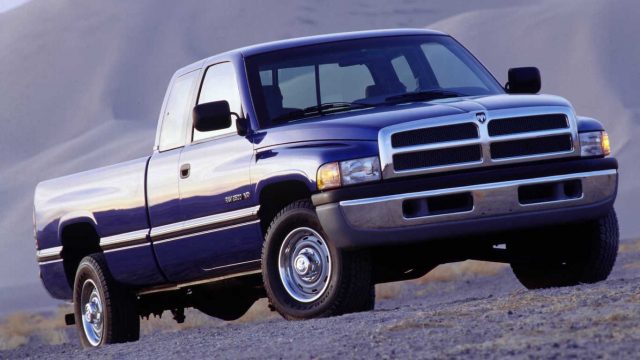 If you wanted to tow big things with your new Dodge Ram in 1997, but had an aversion to diesel power, the Magnum V10 engine was for you. Offered only in the higher rated 2500 and 3500 versions of the Ram, the 8.0-litre powerplant delivered 300hp and 450lb ft of torque. Perhaps the answer to today’s dieselphobia could be found in equipping more cars with huge ten-cylinder engines? 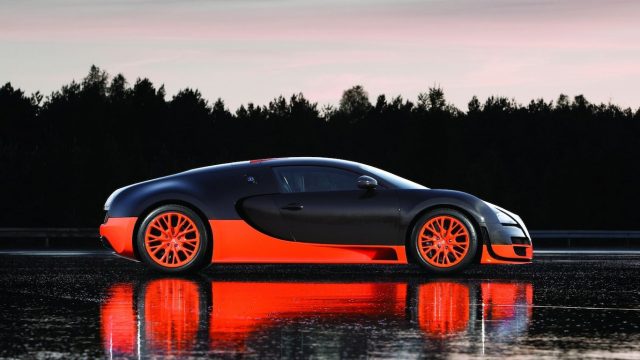 Four turbochargers, sixteen cylinders, 1,000hp, a price in excess of £1.1million and a top speed of over 265mph. Strangely, despite being a car defined by numbers, the 8.0-litre displacement of the Veyron’s W16 engine is one figure that seems to get left by the wayside. But it manages to be the biggest European-built engine on our list, and is still in use in the new Chiron. Just with even more power, of course. 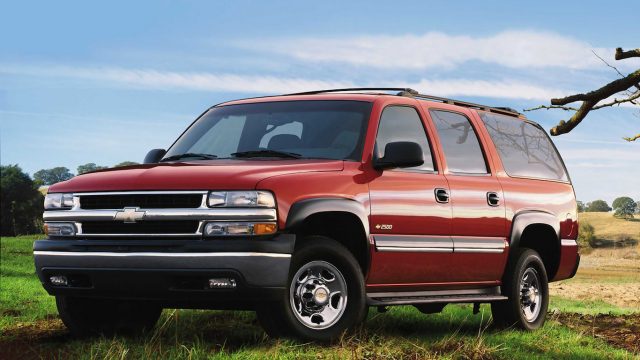 If you thought the Ford Excursion was the biggest and baddest SUV on our list, think again. Like the Excursion, the Suburban is built on a pick-up truck platform – the Chevy Silverado in this case – and came in heavy-duty variants. Picking the 8.1-litre Vortec option meant 340hp, and the knowledge that your engine was the same as one used in U-Haul trucks, motorboats and even armoured cars. Perfectly suited for the school run, then. 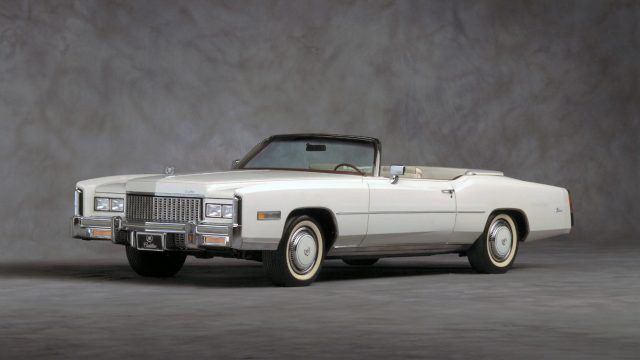 With the land yachts of the 1970s expanding exponentially, horsepower needed to rise to shift the extra bulk. For Cadillac, the answer came with a 500 cubic-inch V8, billed as the world’s largest at the time of introduction in 1970. Changes to official horsepower ratings, and the need to meet emissions regulations, meant the power output dropped from 400hp in 1970, to just 190hp by 1976. Not ideal in a car rocking some 2,300kg of weight. 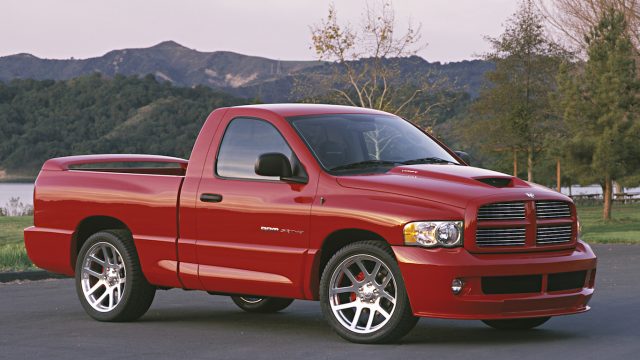 There is a definite pattern to Dodge wanting to have the biggest engines in a pick-up truck. Not many good things came from the ill-fated DaimlerChrysler merger, but let the Ram SRT-10 be one positive memory at least. Unlike the earlier Magnum version, the SRT-10 was all about acceleration rather than towing, which meant dropping the 8.3-litre engine from the Dodge Viper under the bonnet. With 500hp and 525lb ft of torque, 0-60mph was just 5.2 seconds away. 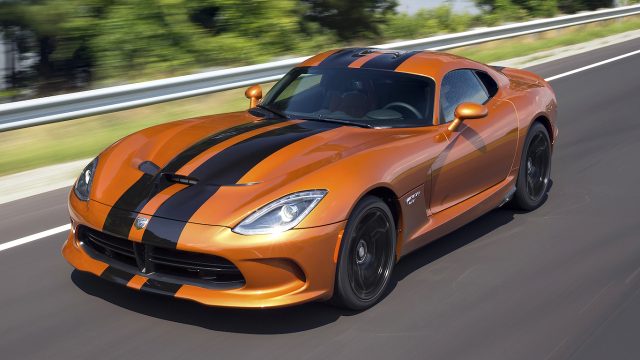 Seemingly not content with previous efforts, Dodge engineers managed to extract another 100cc from the big V10 in 2008. By its final fifth generation, power from the 8.4-litre motor had risen to 645hp. Performance was equally ridiculous, with 0-60mph in 3.5 seconds and a 208mph top speed. With the Viper now consigned to the history books, we have to question whether we’ll ever see a production car with an engine this large again. 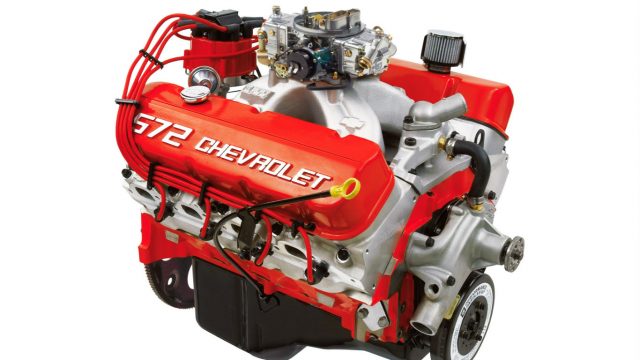 If the previous 23 options aren’t big enough for you, how about the choice to simply buy an engine and fit it to whatever car you want? Crate motors are big business in the USA, with hot rodders and tuners being particular fans of Chevy offerings. For $17,225 (£13,700) Chevrolet will deliver you a 572-cubic inch V8 producing 621hp and 645lb ft. If you happen to run on race fuel, that output increases to a ridiculous 720hp. Just make sure you measure your engine bay before ordering… 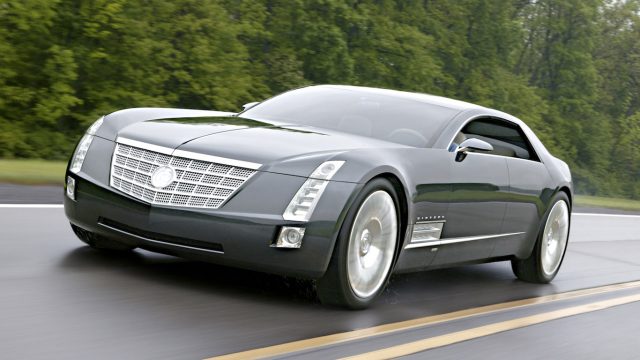 Ok, so we’ve bent the rules a little with the 1,000hp 13.6-litre Sixteen concept car. But, in our defence, Cadillac did produce a working version that was featured on Top Gear, and also in the films Click and Real Steel. In addition, Cadillac also built regular production V16-powered cars in the 1930s, even if they made do with a displacement of just 7.4 litres. The Sixteen featured ‘displacement-on-demand’ technology, allowing it to run on twelve or eight cylinders to save fuel.