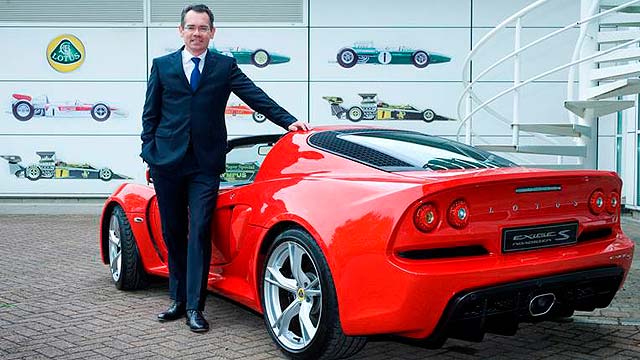 Gales, who’s also worked at GM, Daimler, BMW and VW, joined the firm yesterday (1 May 2014). Current COO Aslam Farikullah, who stepped in after former CEO Dany Bahar was fired, will remain a board member of Lotus Cars Ltd and work alongside Gales.

The new boss joins from the European Association of Automotive Suppliers, where he also served as CEO.

Proton CEO Dato’ Abdul Harith Abdullah said: “This is an exciting time for Lotus, and Jean-Marc’s appointment could not have come at a more appropriate time, especially taking into account our plans for Lotus.

“We believe that with his strong technical and managerial expertise and leadership, Jean-Marc will be able to drive the Lotus transformation plan and further enhance Lotus’ business and capabilities.”

Gales, who’s from Luxemburg, has an MSc in Mechanical Engineering from a German university, and an MSc in Management from Imperial College London. Both will be put to good use at Lotus.

He was president of Citroen and Peugeot between 2009 and 2012, introducing the DS line and delivering “record retail sales in 2009 and 2010”. Again, this will be useful at Lotus…

Encouragingly, he was also heavily involved in the firm’s motorsport division and was one of the people that convinced rally star (and now WTCC star…) Sebastian Loeb to stay with Citroen WRC back in 2011.