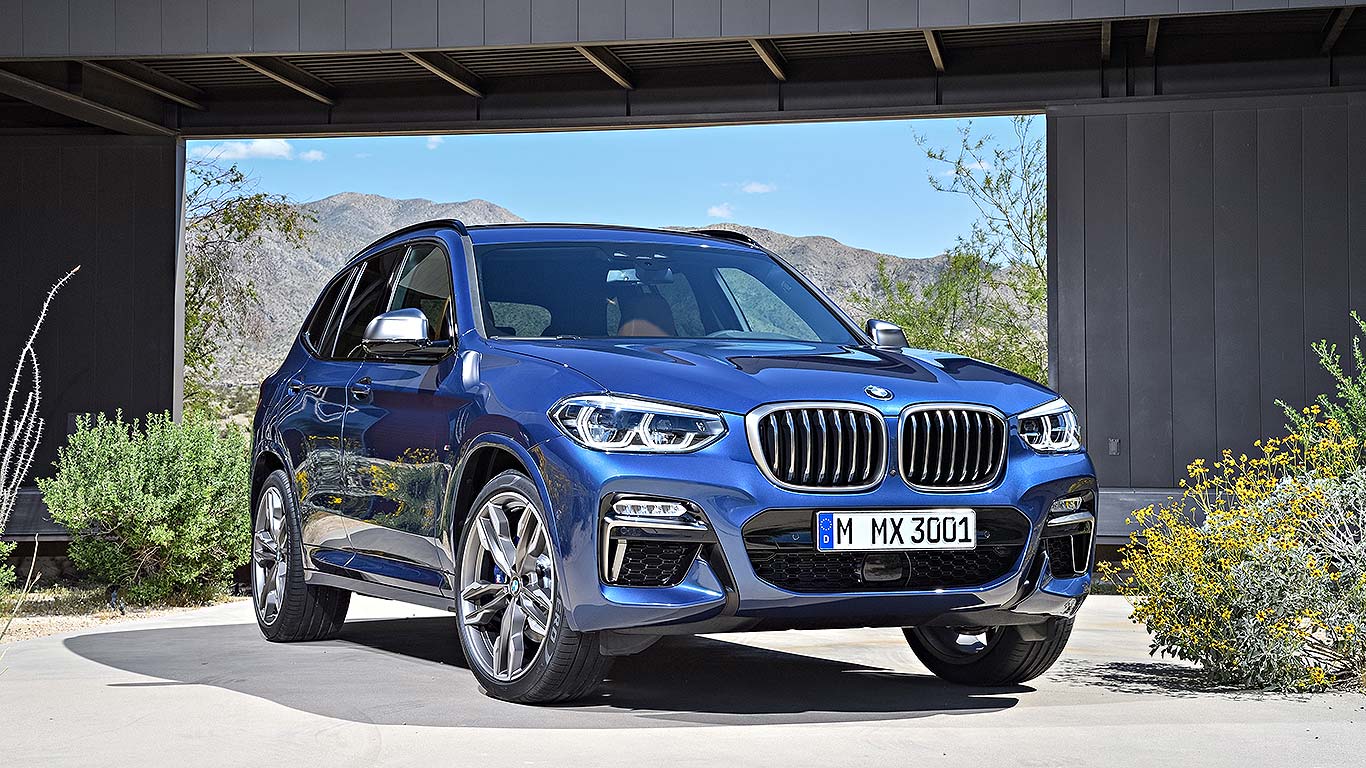 The all-new third-generation BMW X3 goes on sale from 11 November 2017 with a renewed focus on sportiness to make it look less like the frumpy outlier of BMW’s SUV range – and provide a genuinely sporty alternative to a Land Rover Discovery Sport. Prices for the all-new model, derived from the same mechanical platform as the BMW 5 Series and 7 Series, start from £38,800.

However, the highlight of the range will be the first M Performance X3, the M40i. This has a 360hp 3.0-litre six-cylinder turbo petrol model which, thanks to standard launch control, does 0-62mph in just 4.8 seconds. It’s also claimed to do 34.5mpg and costs from £51,280. Like all new X3, it has an eight-speed automatic gearbox, and xDrive four-wheel drive: expect rear-wheel drive models to arrive later, probably taking average economy nearer to 60mpg.

All new BMW X3 have wheels at least 18-inches large, with the M40i taking them up to 20 inches. Other differentiators include a Cerium Grey-painted exterior styling and aero pack, black chrome M Sport exhaust featuring noise-releasing flaps within, M Sport suspension and brakes, plus a distinctive pair of Cerium Grey door mirrors.

The new X3 is now more curvaceous to look at. Inspire by the pretty little X1, it now has more profiled sides including a muscular set of rear haunch curves, a less heavy front end, powerful bonnet bulges and massive kidney grilles with LED headlights standard on all models astride. Overall length is unchanged but the wheelbase is longer and front overhang shortened; at the rear, twin exhausts and a big rear spoiler feature. Click through our images above; the cool lines of the new X3 are striking.

There’s an equally big transformation inside. Out goes a dour dashboard, in comes something with a less chunky appearance, complete with better attention to detail and a prominent freestanding iDrive infotainment screen. There’s six-colour ambient lighting and leather seats as standard, and all models get three-zone climate control (so those in the rear get their own controls). However, the fancy 12.3-in Professional Navigation infotainment screen here, which features touchscreen functionality, is a cost option: the standard Business Navigation system isn’t as large.

The new X3 is still five seats only, but BMW says it’s bigger and both a big panoramic glass roof and double-glazed side windows are available as an option. The boot has grown; it’s now 550 litres seats up, 1600 litres with them down. The X3 will be fine for a bit of mild off roading too, with plenty of electronic aids, clever xDrive all-wheel drive and a 500mm wading depth.

The new X3 will be sold as an SE, xLine, M Sport and M40i when it launches in the UK on 11 November. It’s up to 55kg lighter than the current one, is offered with advanced semi-autonomous BMW CoPilot driving tech, can pair easily with Apple and Android Smartphones (plus Apple Watches and Amazon’s Alexa) and essentially allows buyers to option up much of the clever tech seen in the new BMW 5 Series and 7 Series. How deep is your wallet?

After transforming the dumpy X1, BMW has done the same with the new X3 (of which it has sold a mighty 1.5 million since 2003). The current car is already a strong seller, albeit without the glitzy appeal of an Audi Q5 or Land Rover-ey appeal of a Discovery Sport. The new one looks to have this: to what extent will it now accelerate the popularity of the X3?