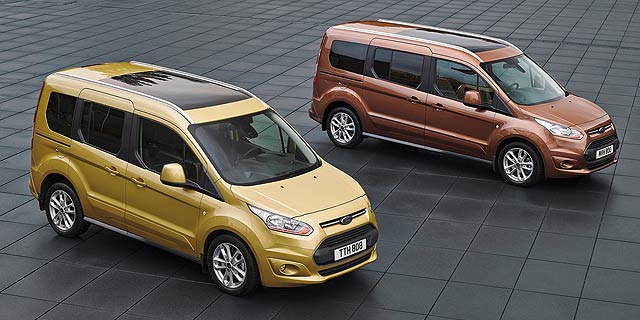 Ford’s added yet another MPV to its line-up. This is the Tourneo Connect – a no-nonsense people carrier with acres of space.

The Ford Tourneo Connect offers a choice of three engines. First up is the 1.0-litre EcoBoost engine that’s being introduced across the Ford range. It copes surprisingly well with a vehicle as big as this, although the 0-62 time of 14.0 seconds from the 100hp engine is more leisurely than urgent.

There’s also a 1.6-litre petrol engine that’s only available with an automatic gearbox. Although the fastest of the range on paper (0-62 in 10.9 seconds), it’s quite a noisy unit and the ‘box is clumsy.

The one we’d go for is the 1.6 TDCi. We tested the more powerful 115hp version (it’s also available with 95hp), which feels torquey and suits the Connect well. It accelerates to 62mph in 13.8 seconds and on to a top speed of 103mph.

Around town it’s difficult to forget just how big the Connect is. Parking it can be tricky (luckily, it can be aided by a rear view camera – a £480 option), but out of town it’s an impressive drive. Body roll is minimal and roundabouts can be taken with aplomb, if you feel the need.

It’s a very refined vehicle – bumps in the road are soaked up well yet it’s not overly wafty. Few manufacturers manage to get the balance right but in this case Ford has done well.

It depends how you look at it. Think of it as a van with windows and, well, it’s pretty good looking really. The front end looks modern but it’s not too in-your-face; it’s fairly conservative.

Think of it as an MPV and your view might change. It’s big and boxy and other people carriers within the Ford range look a lot more stylish. The Tourneo Connect isn’t aimed at people who care about style – it’s aimed at families who factor practicality as more important than everything else.

There’s no doubt about it – this thing is huge. Fold the rear seats flat (easily done) and you’ve got a whopping 2410 litres of loadspace. With all five seats in place there’s still a massive boot capable of carrying everything the average family could chuck at it, and more.

It’s not just loadspace that the Connect does well, either. There are little storage compartments everywhere – even on top of the instrument cluster. Ford’s really worked hard on making sure this is one of the most practical family cars out there – it really does excel.

The panoramic sunroof (standard on the Titanium; £750 option on Zetec) gives the Connect an airy ambiance, likely to be popular with parents of kids who suffer from travel sickness.

For anyone who’s driven Fords before the dash will look familiar. It’s more Focus than old-school Transit, but the feeling of space will soon quash any thoughts of being in a hatchback.

Although generally feeling well made, some of the plastics look like they could pick up a few scratches with the rough and tumble of everyday family life.

The Tourneo does a job – lugs families and their luggage away for a weekend camping. It’s not about gadgets, Ford’s navigation system is a £900 option on the Zetec and Titanium models and £1200 on the Style.

That’s not to say it’s completely spartan. The top-of-the-range Titanium comes with cruise control with active speed limiter (£180 on other models) as well as rear parking sensors – which all help pilot this behemoth.

While gadgets aren’t strictly necessary for a family load-lugger, safety is. Although the Tourneo Connect is yet to be tested by Euro NCAP, the Transit Custom on which it is based scored highly.

Ford’s Active City Stop detects potential front-end collisions at speeds of up to 18mph and applies the brakes sharply if the driver doesn’t react. This is available as part of option packs on the Style and Zetec derivatives while the Titanium comes with it as standard.

Most buyers will opt for the 1.6 TDCi which will achieve a combined fuel consumption of 55.7mpg. This improves to 60.1mpg with the optional £360 fuel economy pack (which includes automatic stop-start and active shutter grille). For something so large that’s impressive – although the Citroen Berlingo manages 68.9mpg.

CO2 emissions are decent too, starting at 124g/km for the diesel with fuel economy pack.

The value for money

With a starting price of £14,245, the Connect is pretty hard to beat if you want as much metal as possible for your money. However, it isn’t as well rounded as many people carriers and it’s not overloaded with gadgets – you’ll have to put practicality first to want one.

Ford is still the biggest seller of cars in the UK and its dealership is also the nation’s biggest, by far: there are thus dealerships in most towns. The company has a good reputation for customer service.

If you’re always wanting more space and are willing to compromise in areas such as image, the Tourneo Connect is a decent tool. The price is right and it drives well for its size – however, you’ll never forget that it’s based on a van.