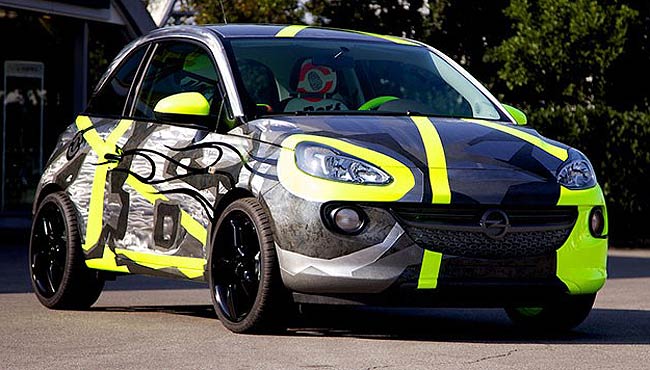 Nine-time motorcycling Grand Prix World Champion Valentino Rossi has teamed up with Opel to create a special version of its Adam city car.

The Italian two-wheel demon collaborated with famous motorcycle helmet designer Aldo Drudi to create the one-off Adam (sold by Opel’s sister company Vauxhall here in the UK) – and boy, is it bright.

On Bing: see pictures of the Vauxhall Adam

The car has been created with charity in mind, and will be donated to the not-for-profit Meyer Children’s Hospital Foundation – the unique Adam will go up for auction at a fundraiser this December, with all proceeds going to the organisation.

The Adam is known for its versatility when it comes to customisation options, with around 4 billion different possible combinations of Vauxhall’s compact hatchback available.

There’s only one in ‘Rossi’ spec, though. The Yamaha MotoGP rider went to town, redesigning the car with Drudi to display the Italian’s best known “fetish images” and symbols most treasured by him.

Big flashes of luminescent yellow on the body – as well as the same colour for the left-hand side wheels – contrast with black and grey, while an eye-catching set of ‘flames’ run away from the wheel arches and down the car’s flanks, too.

The colour combo stretches to the inside, where the seats, steering wheel and door cards have all been trimmed in a replica design of Rossi’s motorcycling leathers. The interior materials were supplied by leather manufacturer Dainese.

“How could I resist the challenge? The task was to invent a completely new car, and for a good cause. No sooner had I spoken with Opel than I was already discussing with Drudi how to design this special Adam.”

Rossi provided the inspiration, while Aldo Drudi played a significant part in realising the design, as he outlines:

“The design phase took a very long time. It took us hours of hard work, but then Valentino is hard to please. And so am I. Scores of drawings were produced, phone calls were made and every time we decided to change everything and started all over again.

“In other words, it was exhausting but it was worth the effort. The car has turned out beautifully and we’re happy that it will be used to support the Meyer Hospital.”

The Meyer Children’s Hospital Foundation supports the hospital in carrying out scientific research work and health projects with continuous upgrades of technological equipment, investing in facilities to welcome children and make the hospital environment more comfortable for them while supporting their families.

On Bing: see pictures of the Vauxhall Adam

The best city cars to buy