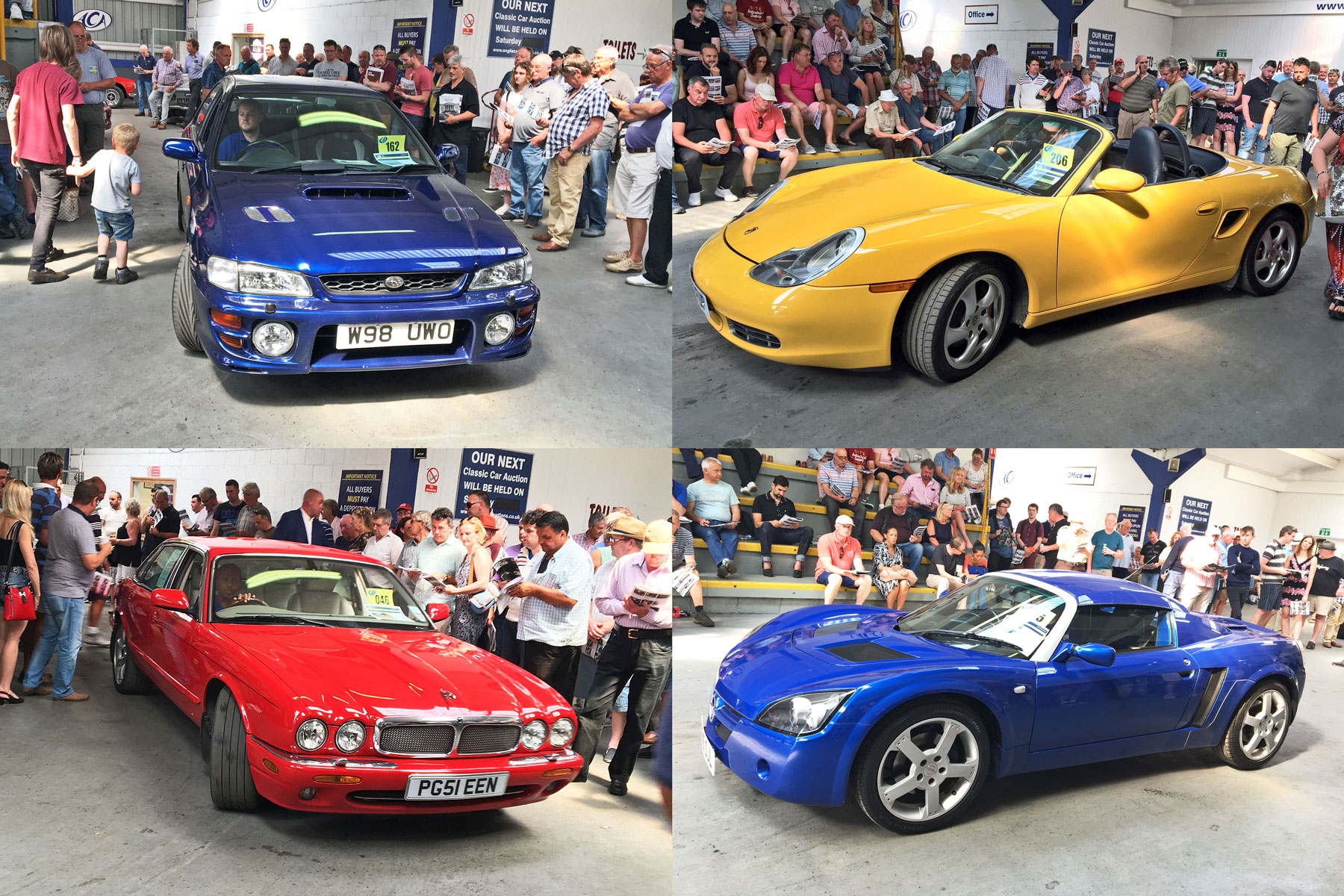 More than 250 cars went under the hammer as part of Anglia Car Auctions’ July classic sale this weekend – with something to suit all budgets, from a £125 Austin Metro to a £115,000 BMW 3.0 CSL. Although marketed as a classic car auction, modern classics proved to be the real hot property. Here are 10 modern classics that caught our eye. 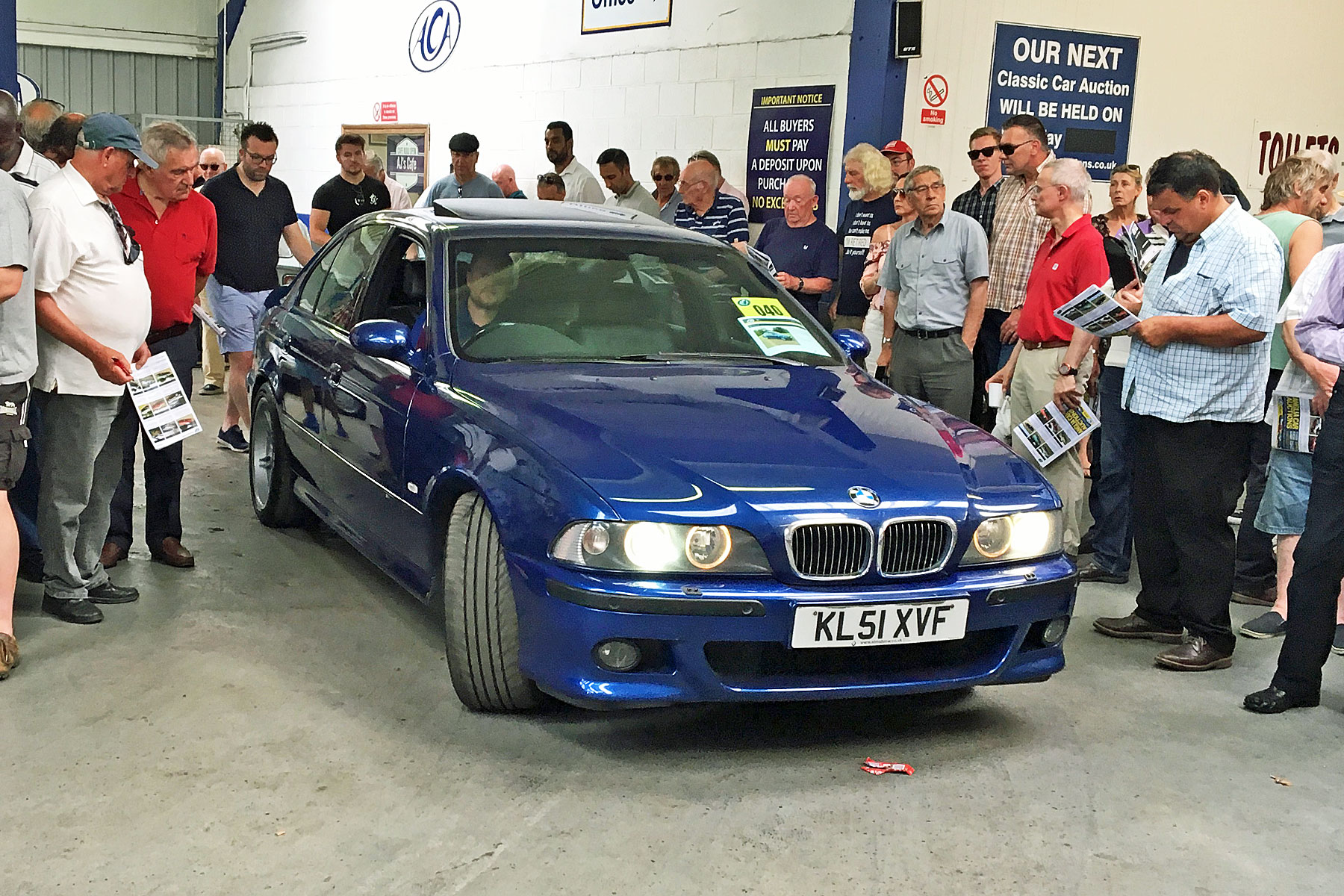 Powered by a 400hp V8 combined with a six-speed Getrag manual ’box, the E39 M5 is as desirable today as it was when launched in 1998. This example, finished in desirable Le Mans Blue, isn’t the tidiest left in existence – showing 131,000 miles on the clock and in need of a bit of TLC to the bodywork. Still, its hammer price of £7,000 makes it a very tempting buy. Don’t forget, though – like all cars here, it’s subject to an extra 5% (plus VAT) in auction fees. 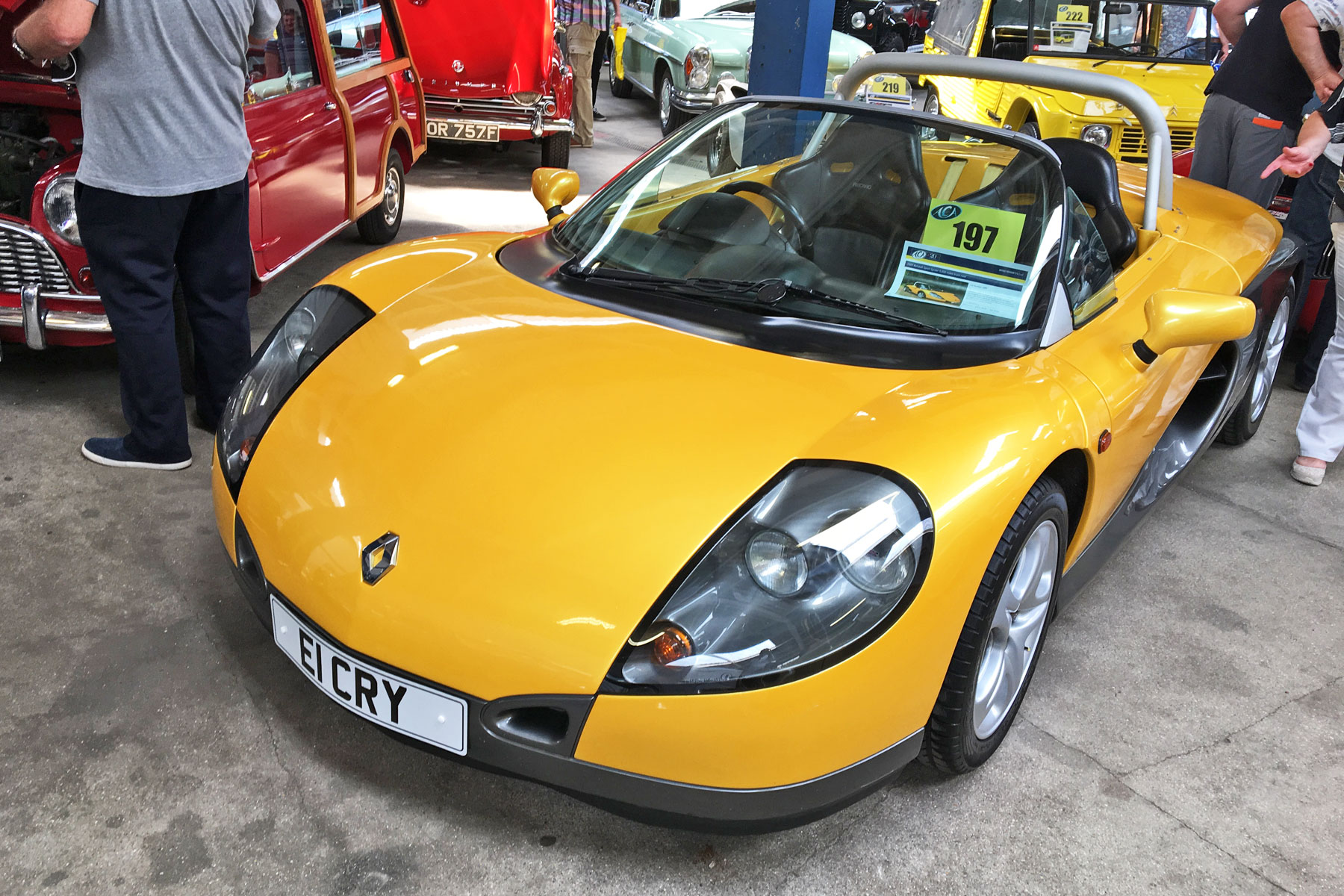 A bizarre French rival to the Lotus Elise… what’s not to like? The Renault Sport Spider, launched in 1996, combined an aluminium chassis with plastic composite bodywork. Power came from a mid-mounted four-cylinder engine producing 150hp which, helped by a 930kg kerbweight, accelerated the Spider to 62mph in 6.5 seconds. 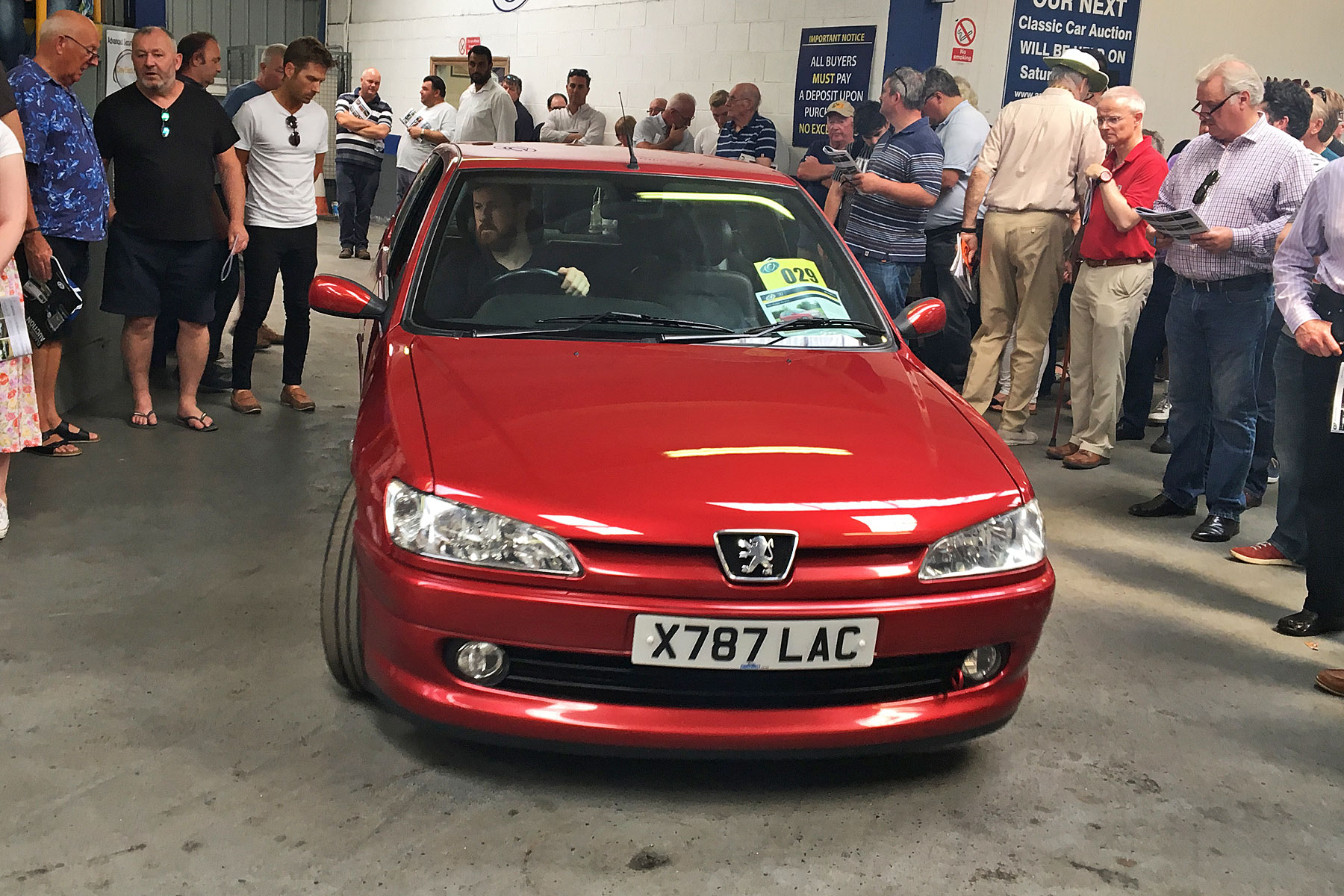 If the 205 GTi is anything to go by, French hot hatches definitely have investment potential. The newer 306 GTi 6 is a long way from being as desirable as the 205, but good examples are getting harder to find. This one, although not mint, is probably one of the tidiest on the market. It’s covered 62,000 miles and comes with full service history – a must when shopping with investment in mind. It sold for £4,200, falling short of its £4,750 to £5,750 estimate. 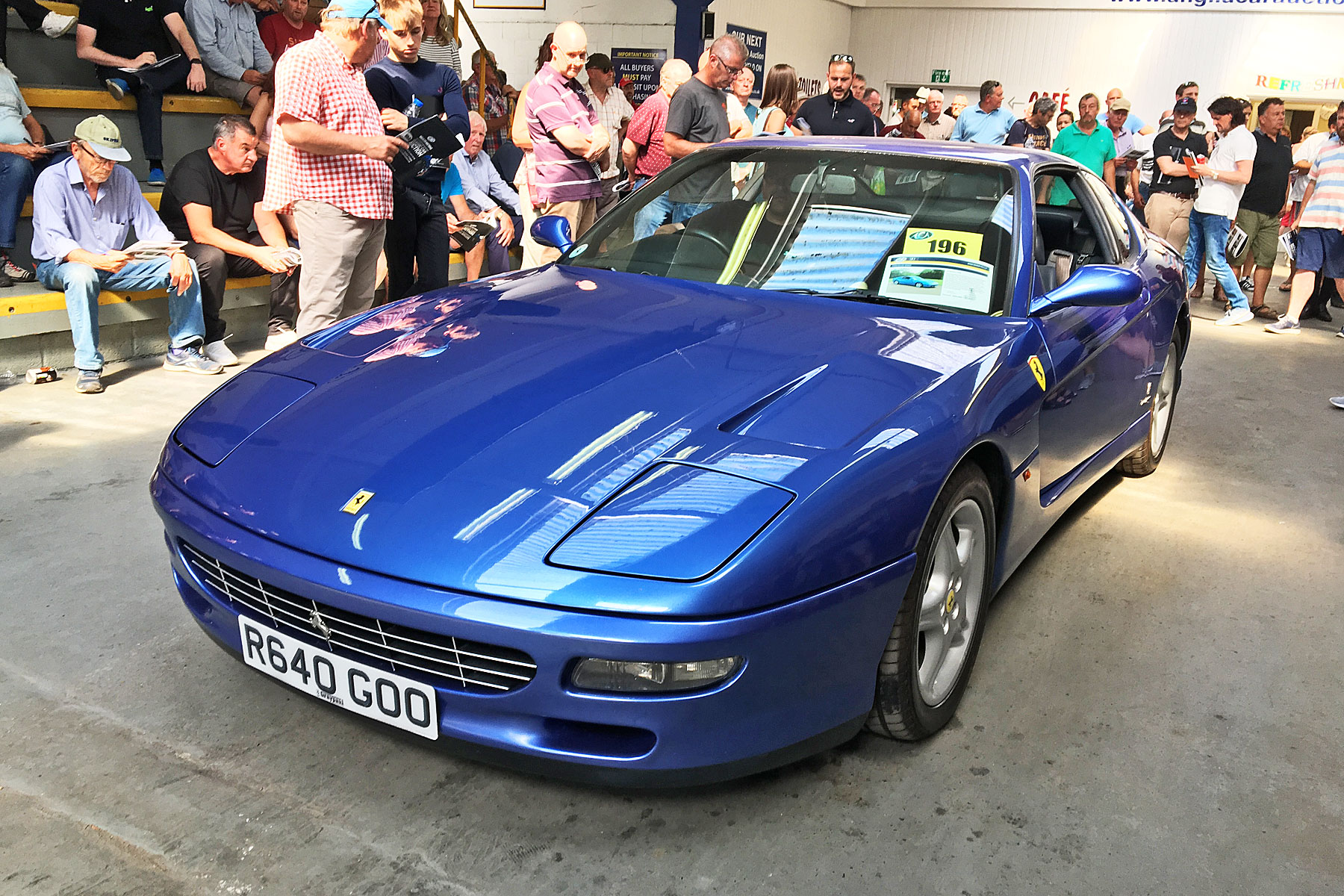 Ferraris are traditionally hot property at auction – but reports suggest the market appears to have been slowing down as late, with a number of desirable models failing to meet their reserve. The 456 isn’t old enough to make serious money, as evidenced by this tidy example from 1994 selling for just £48,000 at auction – £10,000 short of its lower estimate. Admittedly it’s covered 55,000 miles – not a huge amount, but high enough to knock its value in Ferrari terms (collectors prefer examples that have been dry-stored from new). 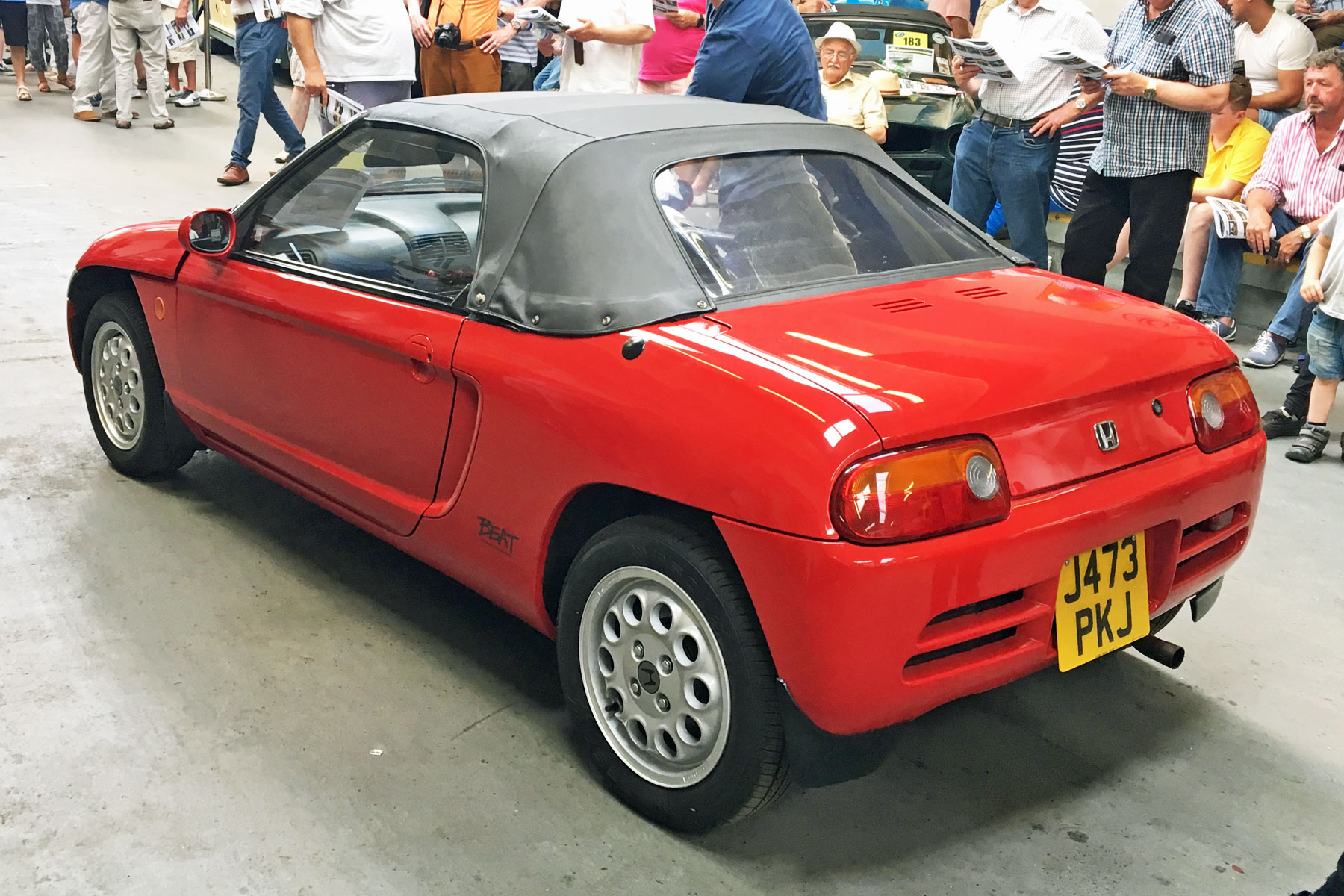 This plucky little Honda Beat is showing 111,773km on the clock (that’s around 70,000 miles), with a full rebuild for its tiny 656cc engine 5,000 miles ago. Designed as a Kei car to benefit from strict Japanese tax rules, the Beat makes an MX-5 of the same vintage look massive. This example has lots of history, apparently, and looked to be in great condition in the auction hall. Surprisingly, it sold for £4,700 – falling short of its £5,250 to £6,250 estimate. 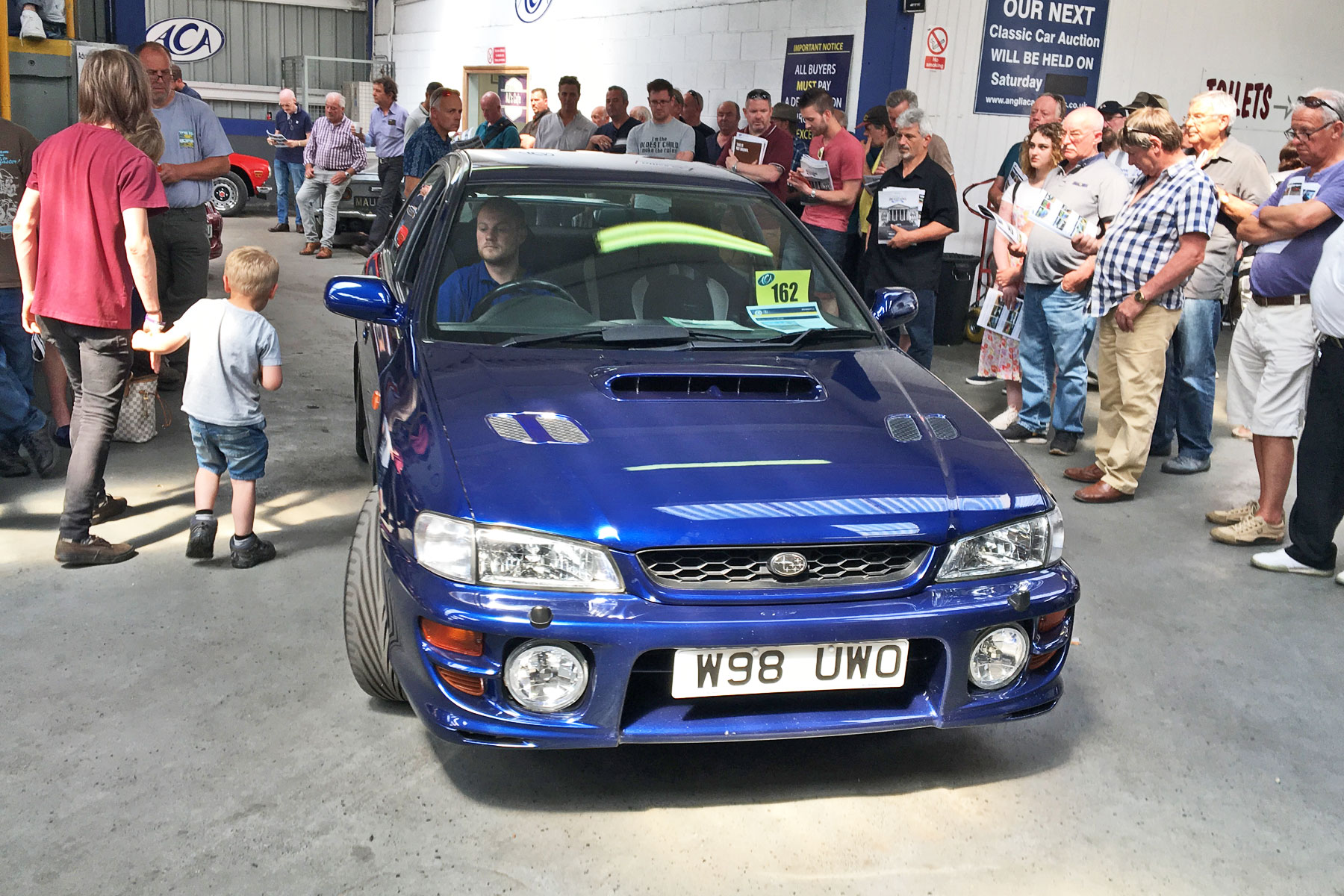 Many fast Imprezas have been abused, crashed or are dodgy Japanese imports lacking history – so finding a rare UK Turbo 2000 in this condition is a novelty. Incredibly, it’s covered just 34,000 miles with its one owner and comes with a history book boasting 18 stamps. It would definitely be a sound investment, we reckon, and its 211hp turbocharged flat-four makes it quick enough to still be fun today. 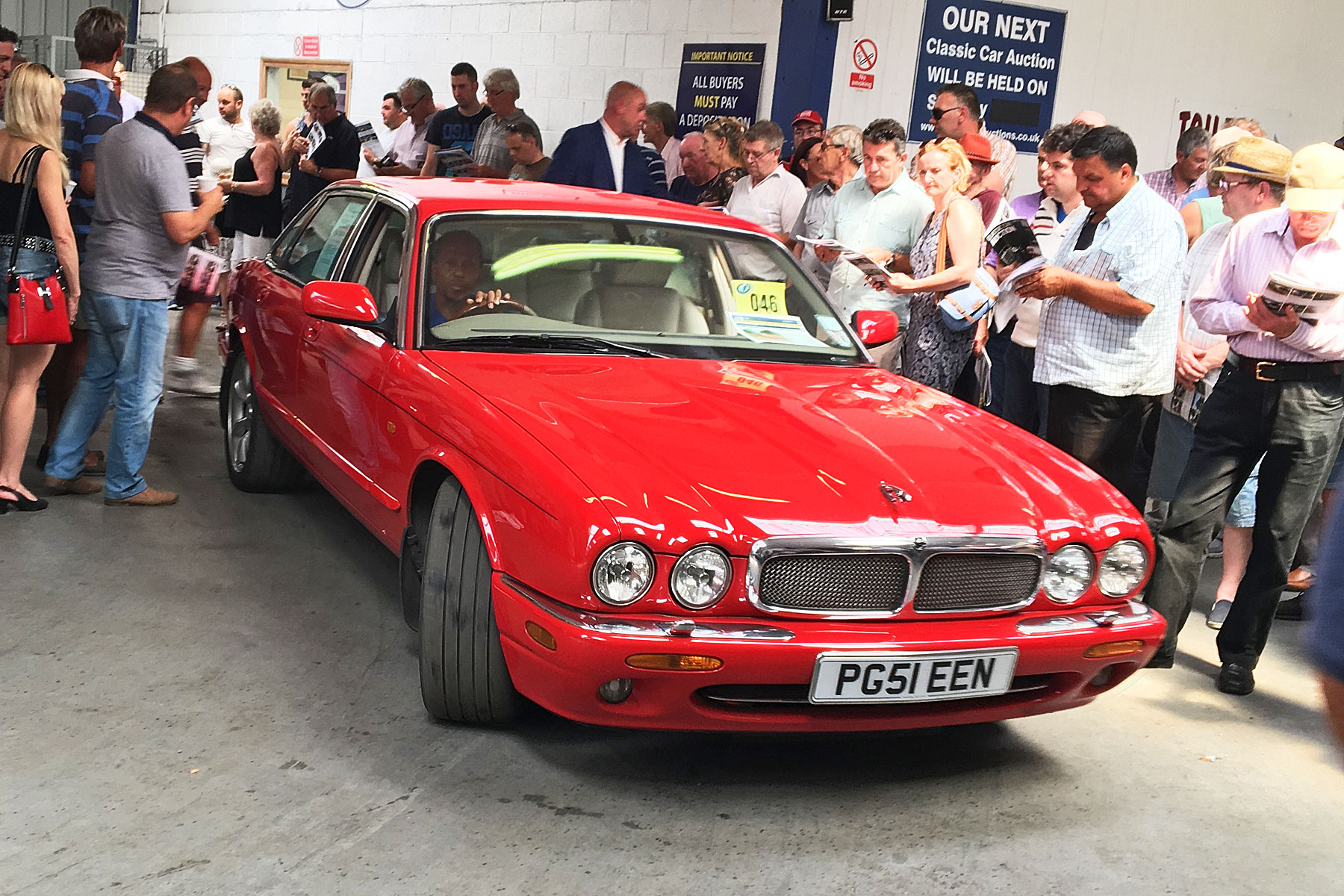 As bargain barges go, the X308-shape XJR is surely at the bottom of its depreciation curve. This 2001 example isn’t the tidiest, having covered 137,000 miles, and not everyone will appreciate the rare solid red paint. As the hammer nearly fell at £1,000, we were close to putting in a bid – that’s incredible value for a car powered by a 4.0-litre V8 and capable of hitting 60mph in 5.0 seconds flat. Fortunately, the rest of the auction hall woke up at this point, and it ended up making £1,800 plus fees. 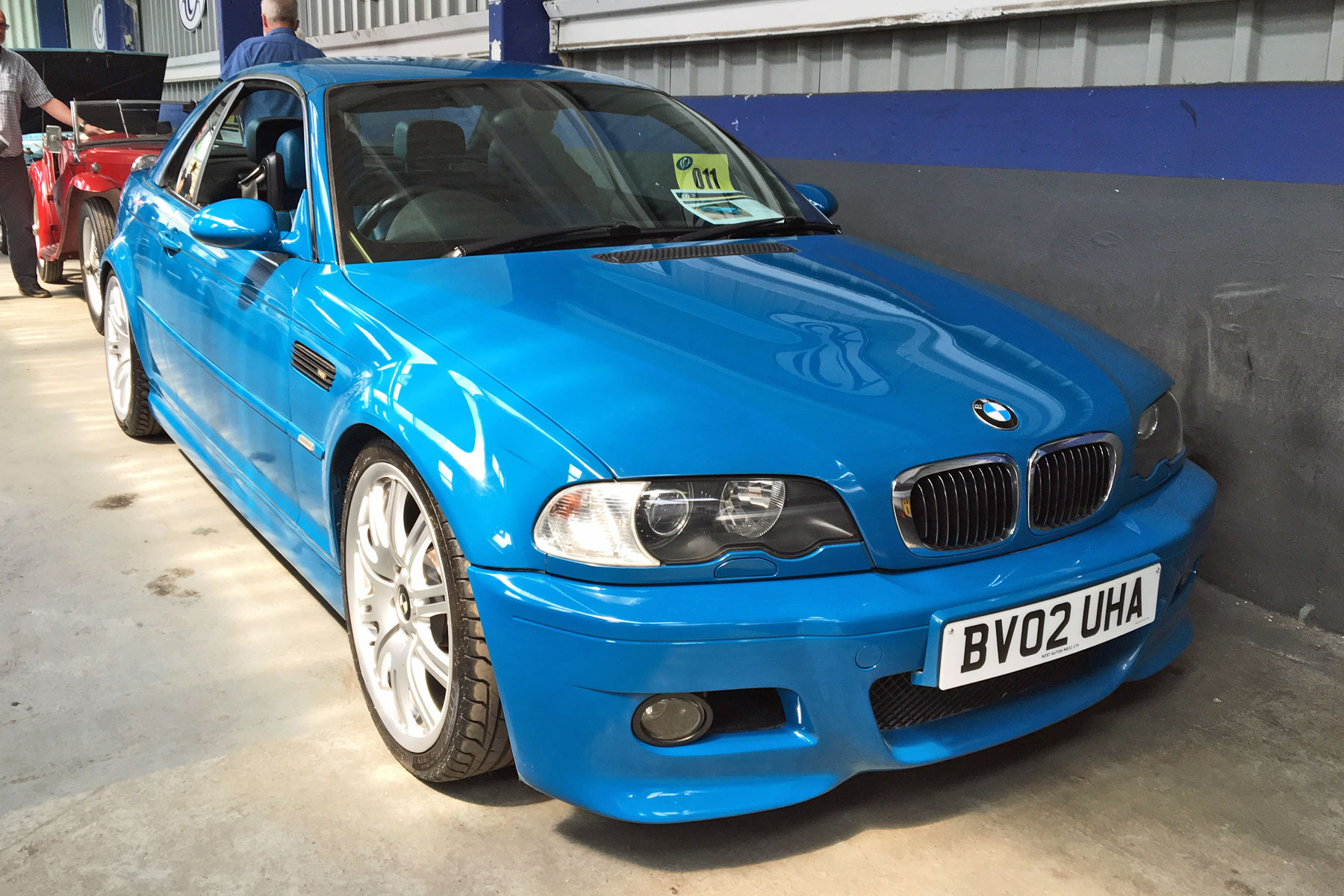 Talking about desirable cars at the bottom of their depreciation curve… the E46-shape M3 can be had for as little as £7,000 now, and represents a true performance bargain. While buying one from auction would be a brave move (they’re not short of issues – from cracking rear subframes to big-end bearing failure), this Laguna Seca Blue version quite literally caught our eye. It’s a convertible, which wouldn’t be our first choice, but it at least comes with a hard top. Selling for £8,100, it scraped over its lower estimate. 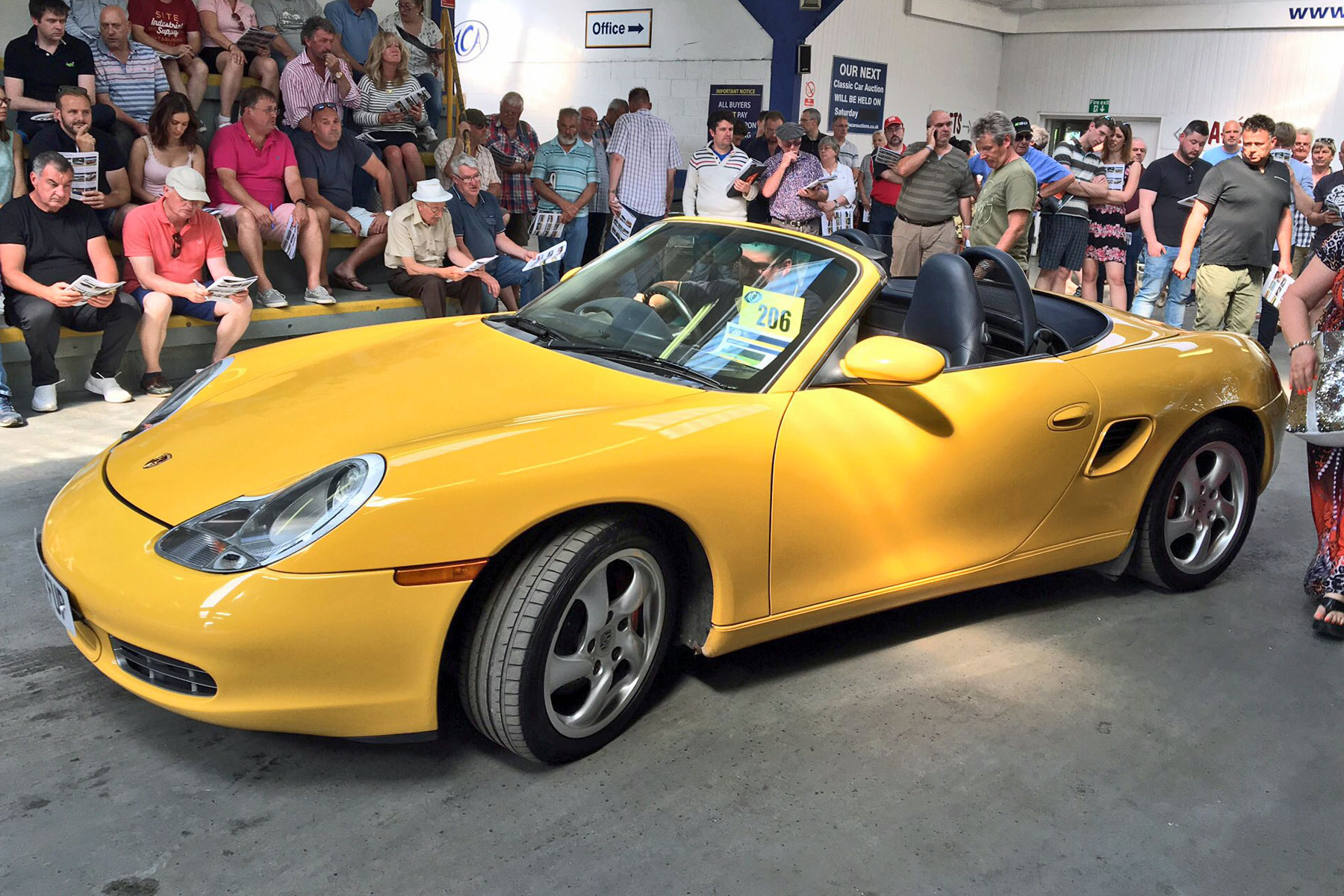 The Boxster 986 is another modern classic bargain in our eyes, especially in 3.2-litre S guise. Old enough to be affordable, yet new enough to be usable, the mid-engined Boxster makes for a very tempting buy. There are a few caveats, though. For a start, there are still plenty around, so values are unlikely to rise anytime soon. Plus, there are plenty of known issues, so it’s worth doing your research. Hunt out a good one with lots of history and you could be onto a winner.

This example has covered close to 120,000 miles and is lacking a few stamps in its service book, which would make us wary. But it’s bright yellow and provisionally sold for £5,600… which could be cheap enough to compensate for any potential problems. 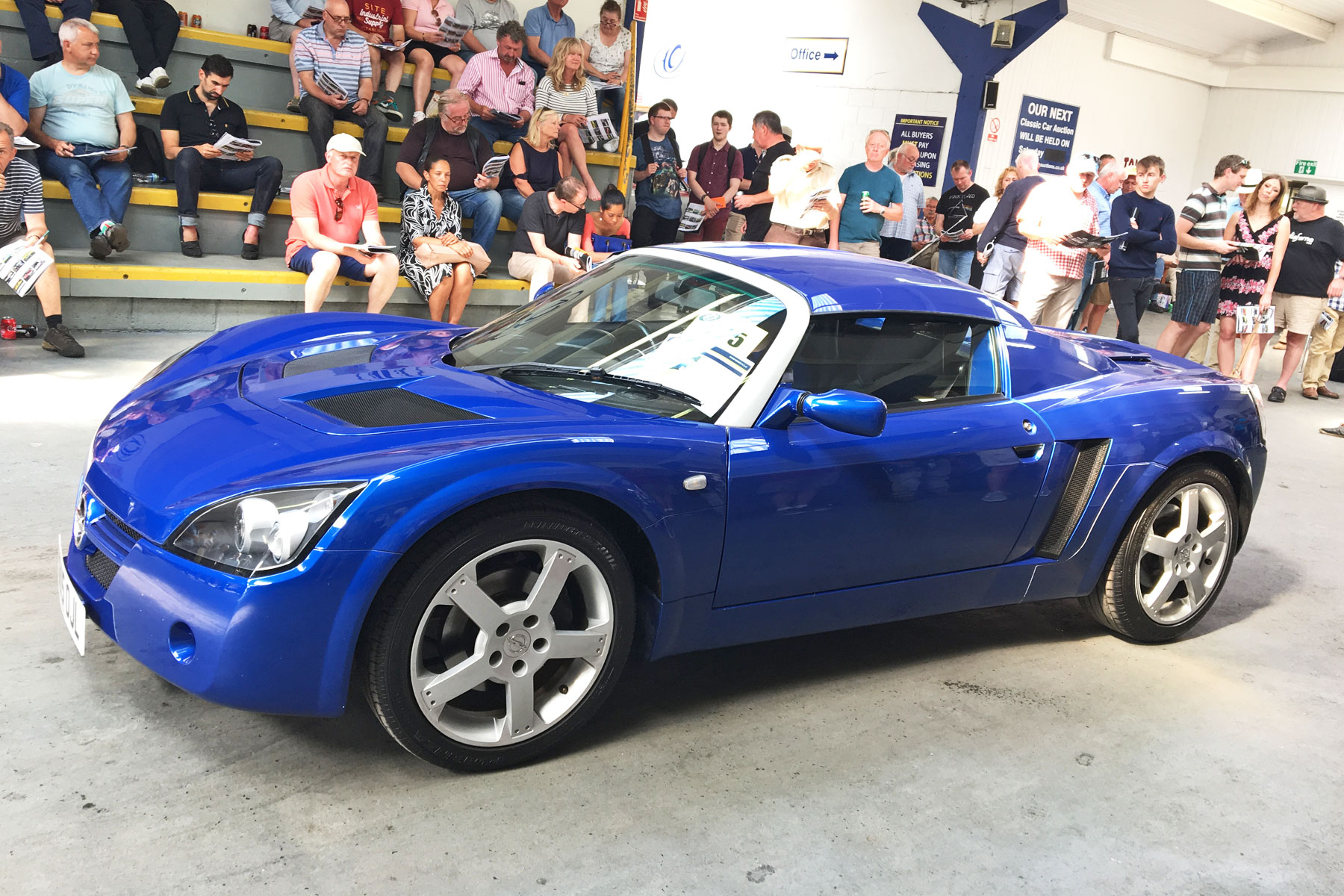 The Opel Speedster (sold in the UK as the Vauxhall VX220) is said to be the thinking man’s Lotus Elise. It shared many parts with the Lotus, but with a more useable 2.2-litre four-cylinder engine. This one has an interesting history, bought new by a Vauxhall engineer and unregistered until 2013. It’s covered just 3,000 miles since then, meaning it remains in as-new condition. It’s spent the last three years of its life on display at a local Vauxhall dealer.