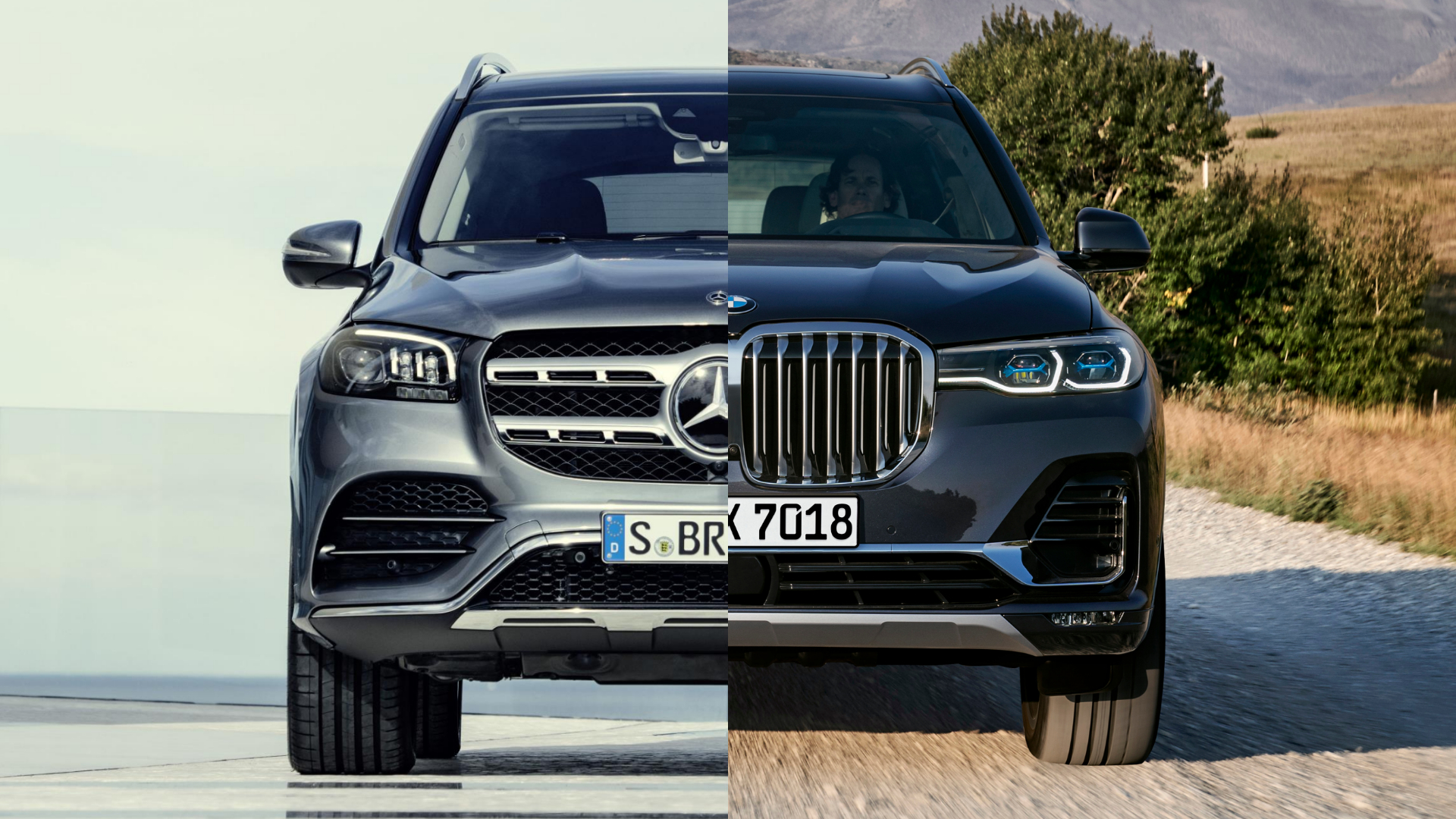 As of this year’s New York Auto Show, Mercedes’ long-serving GLS (formerly GL) has finally been replaced. The new car is a proper, pucker truck of an SUV to head up Merc’s high-rider lineup. This pretender to Range Rover supremacy borrows luxury from the S-Class and is looking to square up to BMW’s all-new X7 flagship SUV. Let’s explore these German supertankers side by side.

‘The S-Class of SUVs’ 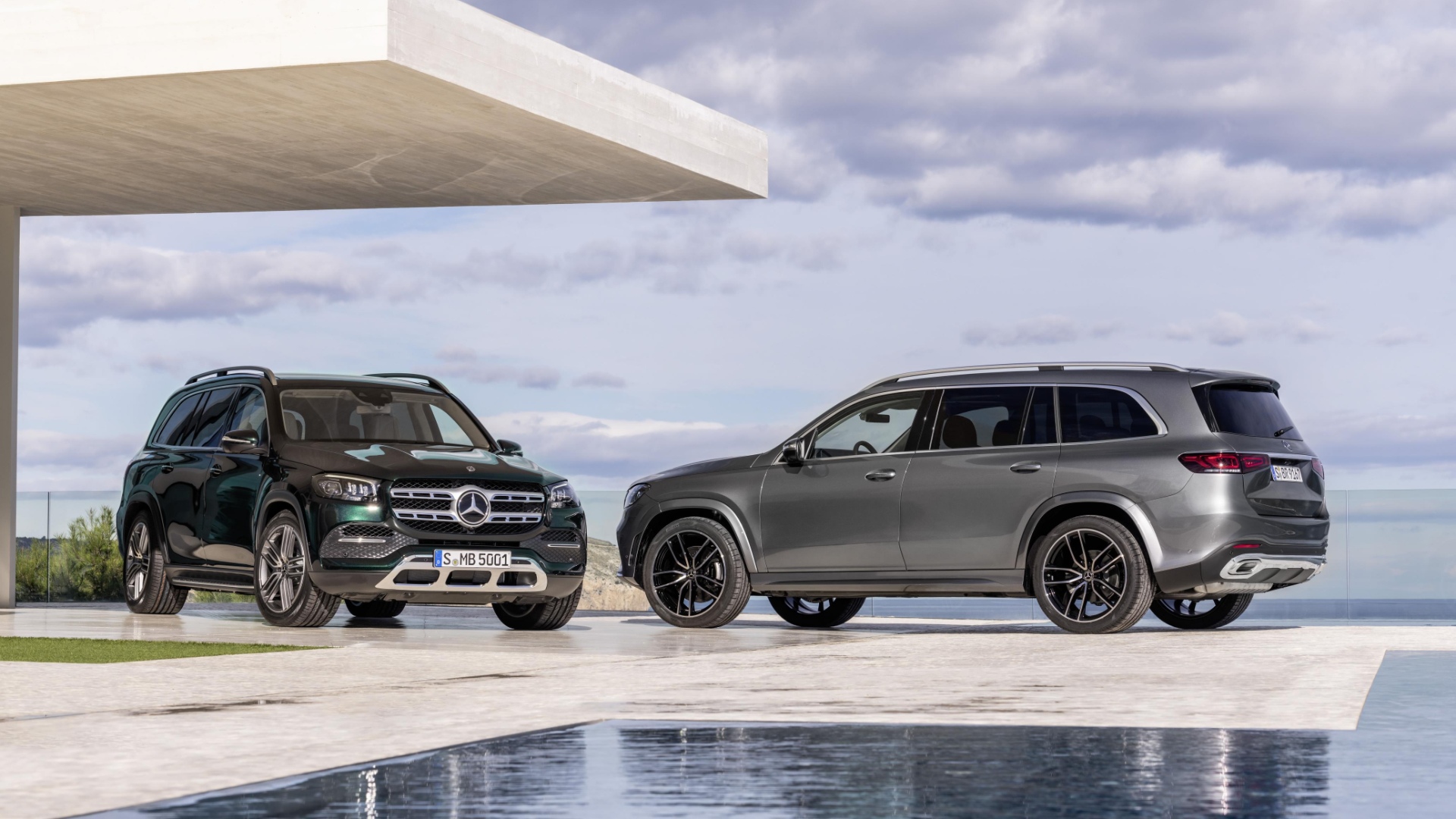 Mercedes is calling the new GLS ‘The S-Class of SUVs’. A bold statement, but then again, size, height and road presence are luxuries the Range Rover had a monopoly on for many years. The X7 has joined the fray, sharing a nomenclature with BMW’s large luxury saloon; and now, the GLS is back and more plush than ever. 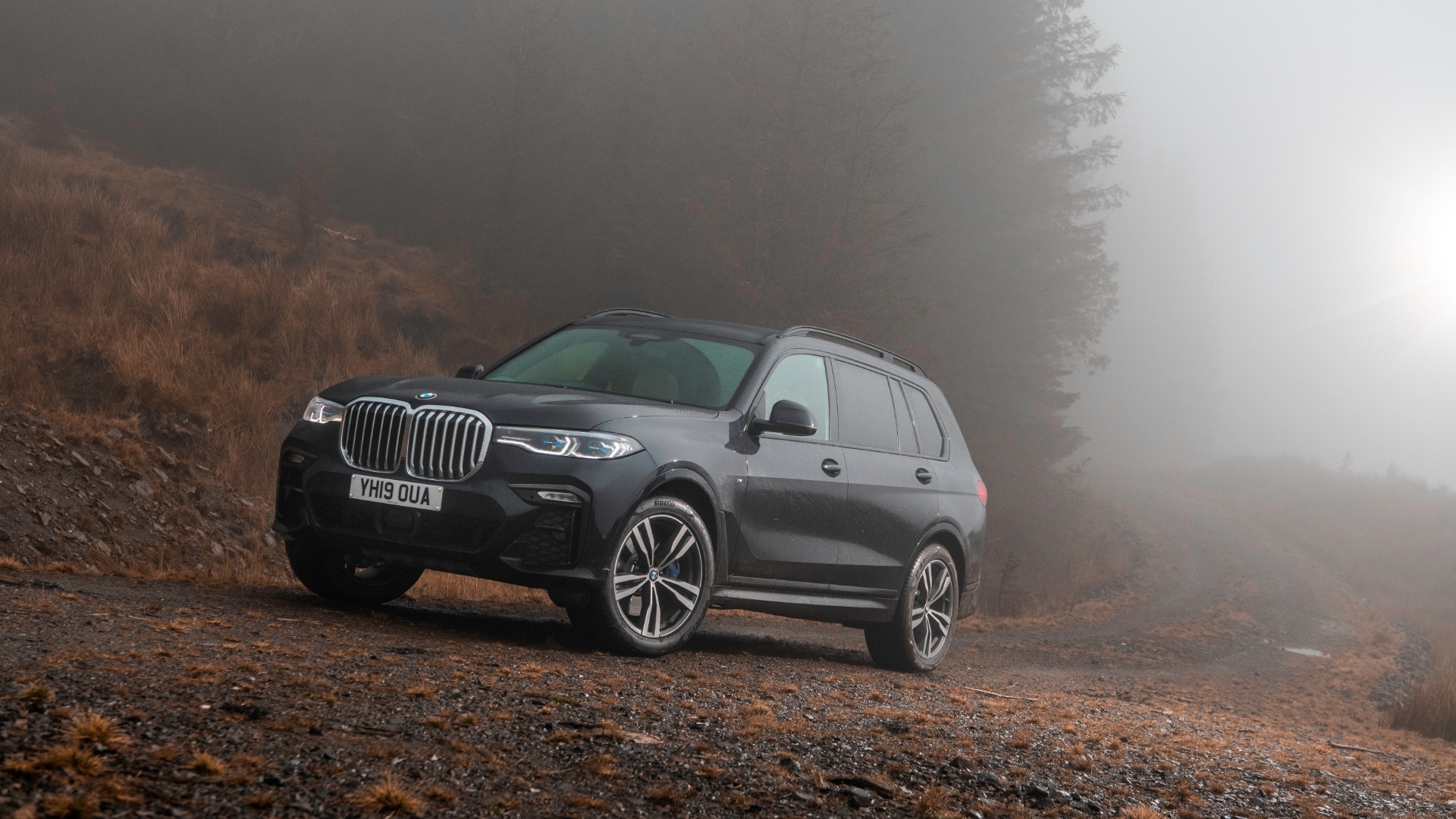 The X7, along with a few other new BMWs, has taken a bit of heat for its styling. While its enormity and boxy proportions are challenging for some, it’s those monstrous buck teeth that have got everyone talking. The swollen kidneys are difficult to get past, but once you do, the bulbous and boxy X7 wears all the hallmarks of contemporary BMW styling rather well. It’s imposing, if not traditionally appealing. Those slim lights add road presence and a whiff of aggression, while the brightwork and big wheels (not to mention the size of it) let you know this is the leader for Bavaria’s high-rise range. 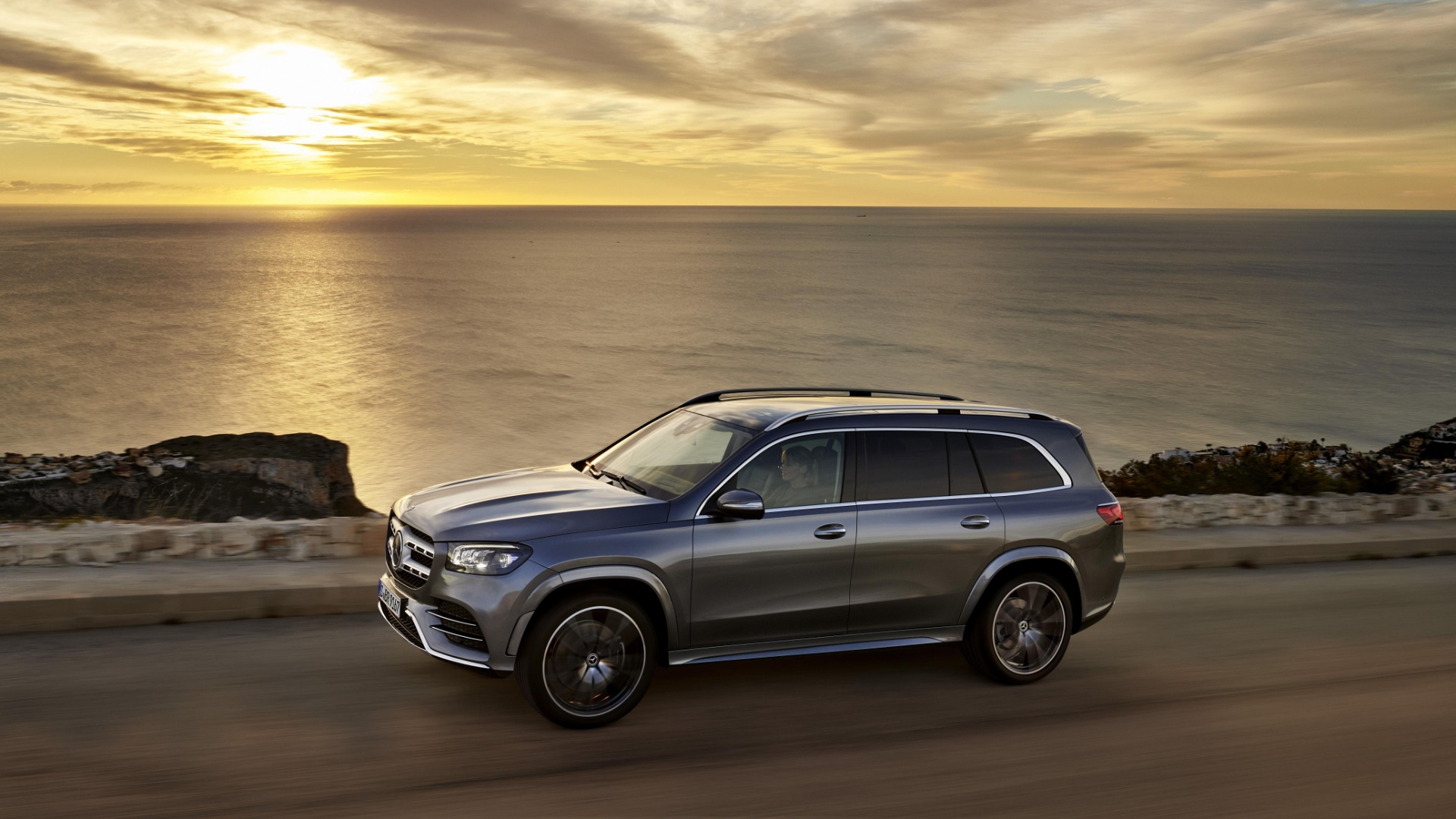 The GLS is easier on the eye, mostly because there’s no stand-out feature to offend. With its ‘Sensual Purity’ design language, it’s a bit more curvaceous and aerodynamic-looking than the decidedly boxy X7. Muscular wheel arches and ‘power bulges’ on the bonnet give every GLS more than a whiff of go-faster pretence. Distinctive Mercedes lighting is diminutive by comparison to the GLS’s size but is attractive all the same. Like the X7, the GLS is flush with chrome work and big wheels, and at the back, recessed exhaust outlets keep the look clean. 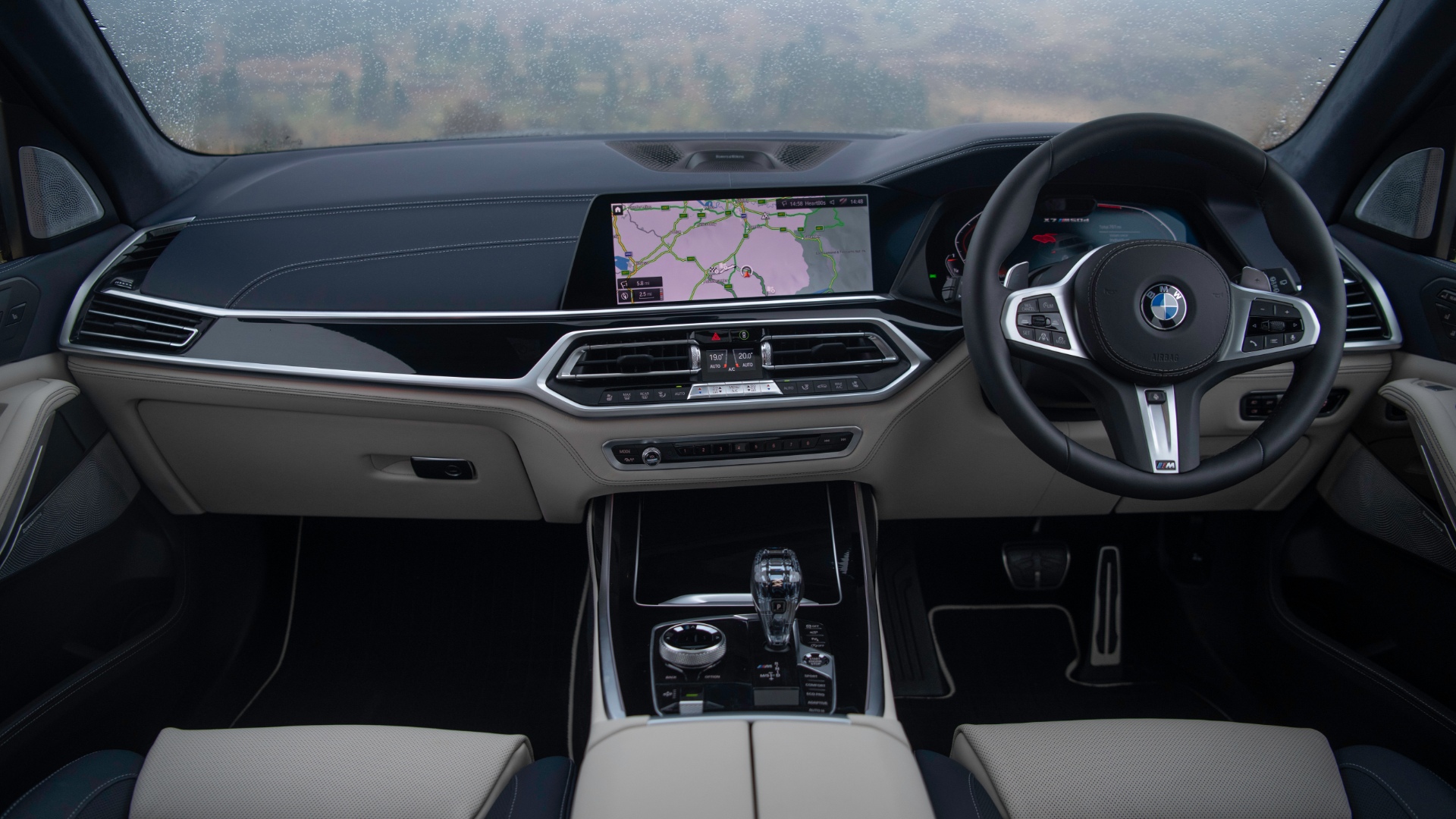 It’s here the big Merc eeks out a lead over the Beemer, we’d hazard to say. To appearances, it’s a far more high-end and luxurious place to be. The X7 just feels a touch grey and derivative, save for the optional diamond-stitched seats. Yes, it’s generously equipped and well-put-together but it’s lacking in style, where the Mercedes has it in spades. It does match the GLS in terms of luxurious seating, though. Both are available with individual ‘captain’s chairs’ in the middle row. 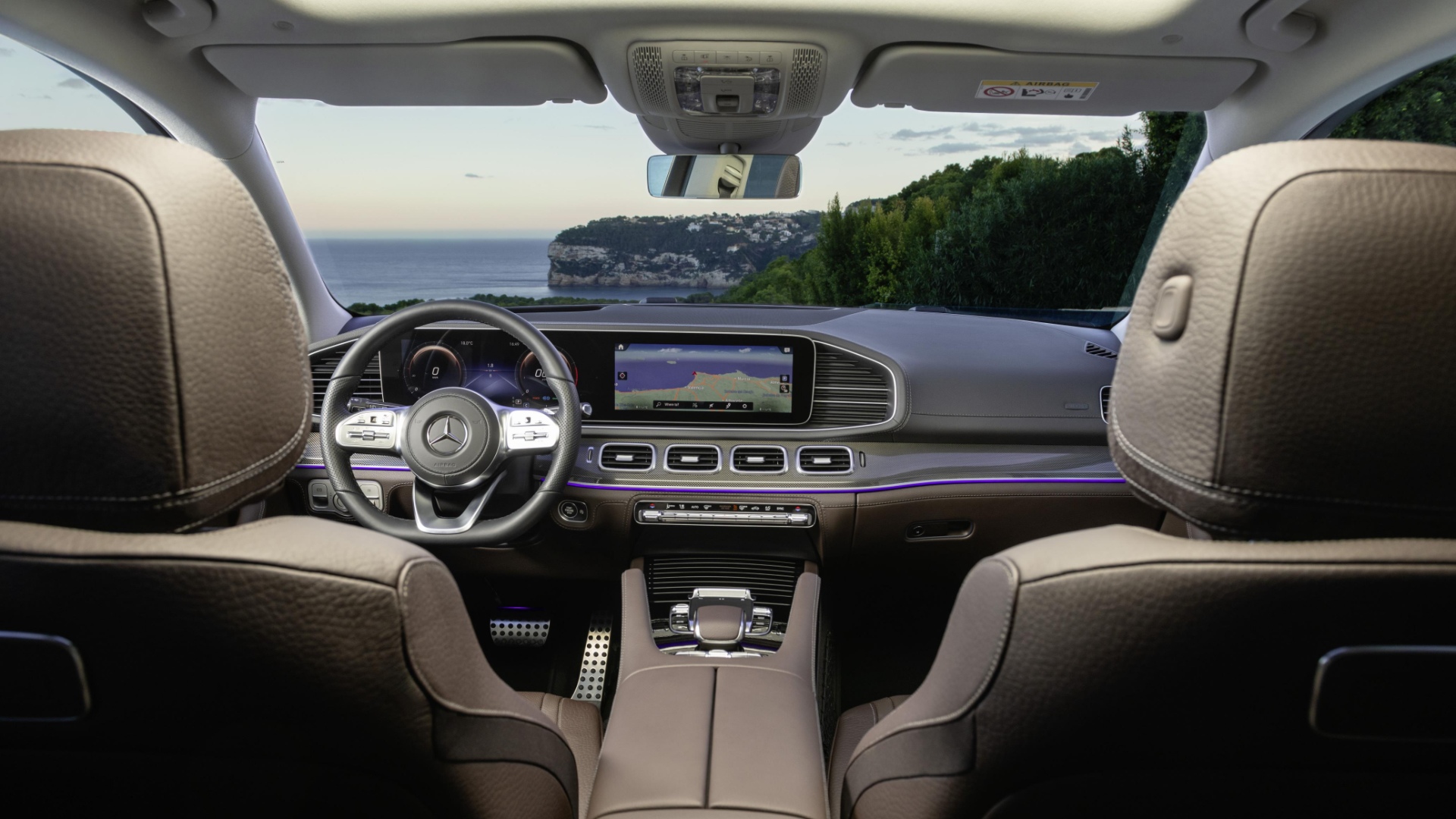 The GLS, has a stunning cabin as standard and will no doubt be loaded with tech, making it a legitimate alternative to the S-Class if you can’t wait for the next-generation model. The 12.3-inch high-resolution screens house the very latest MBUX operating system and integrate nicely into the cabin’s facia. MBUX also creeps into the rear entertainment systems, too. While it’s already a lovely place, the rumoured Maybach variant can only take the levels of luxury into the stratosphere. 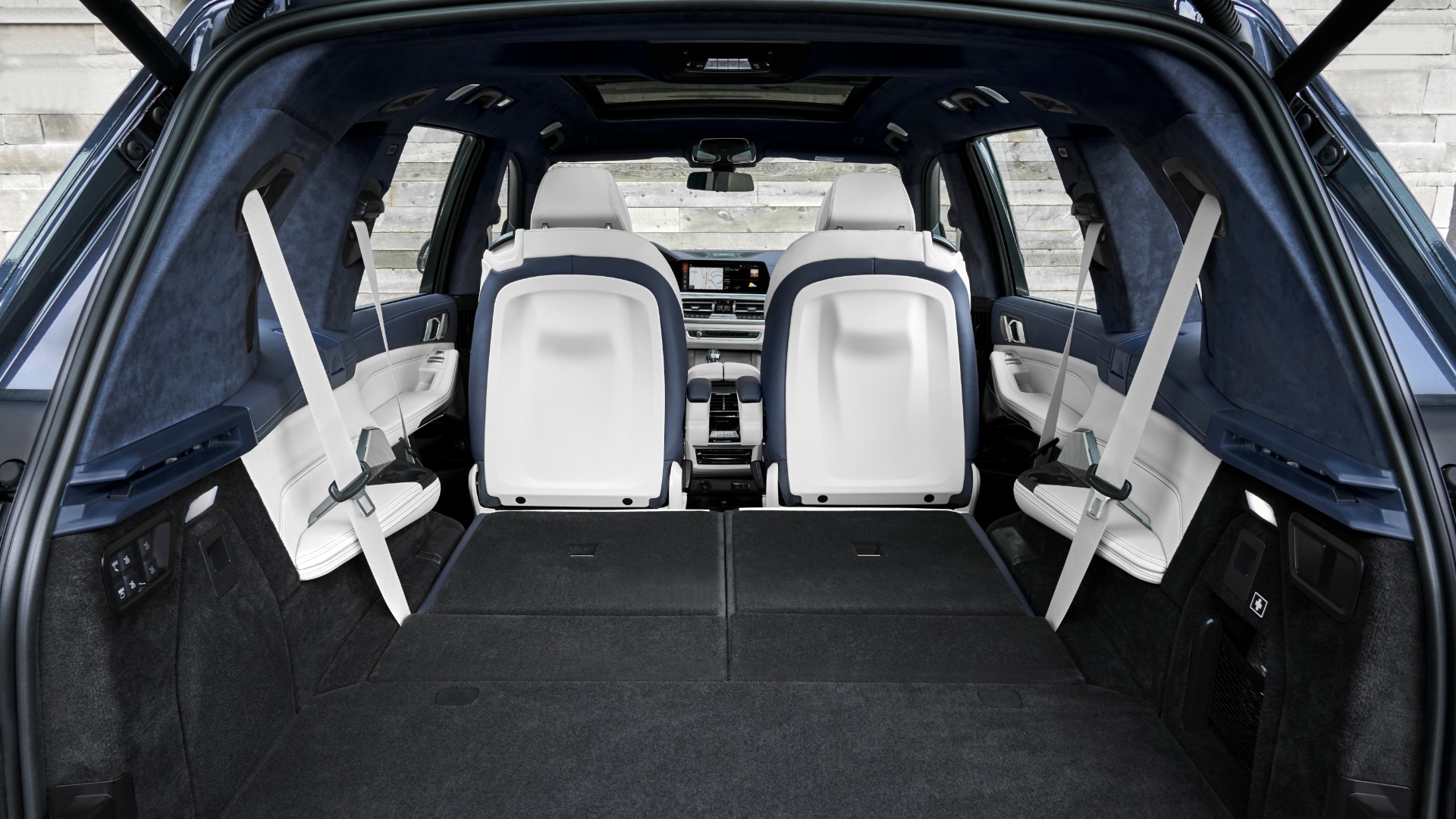 The X7 holds firm against the GLS in terms of practicality. It too has fully electrically controllable seats across all three rows. It too offers either a seven-seat with a middle bench or a ‘captain’s chairs’ option. It too can boast a hefty boot size, though not up there with the big Benz. A maximum of 2,120 litres falters in the face of the Merc’s 2,400. It also has a slightly shorter wheelbase than the Merc, with 3,105 losing out by 30mm to the GLS’s 3,135mm. Odd to consider the X7 ‘compact’ in this comparison. 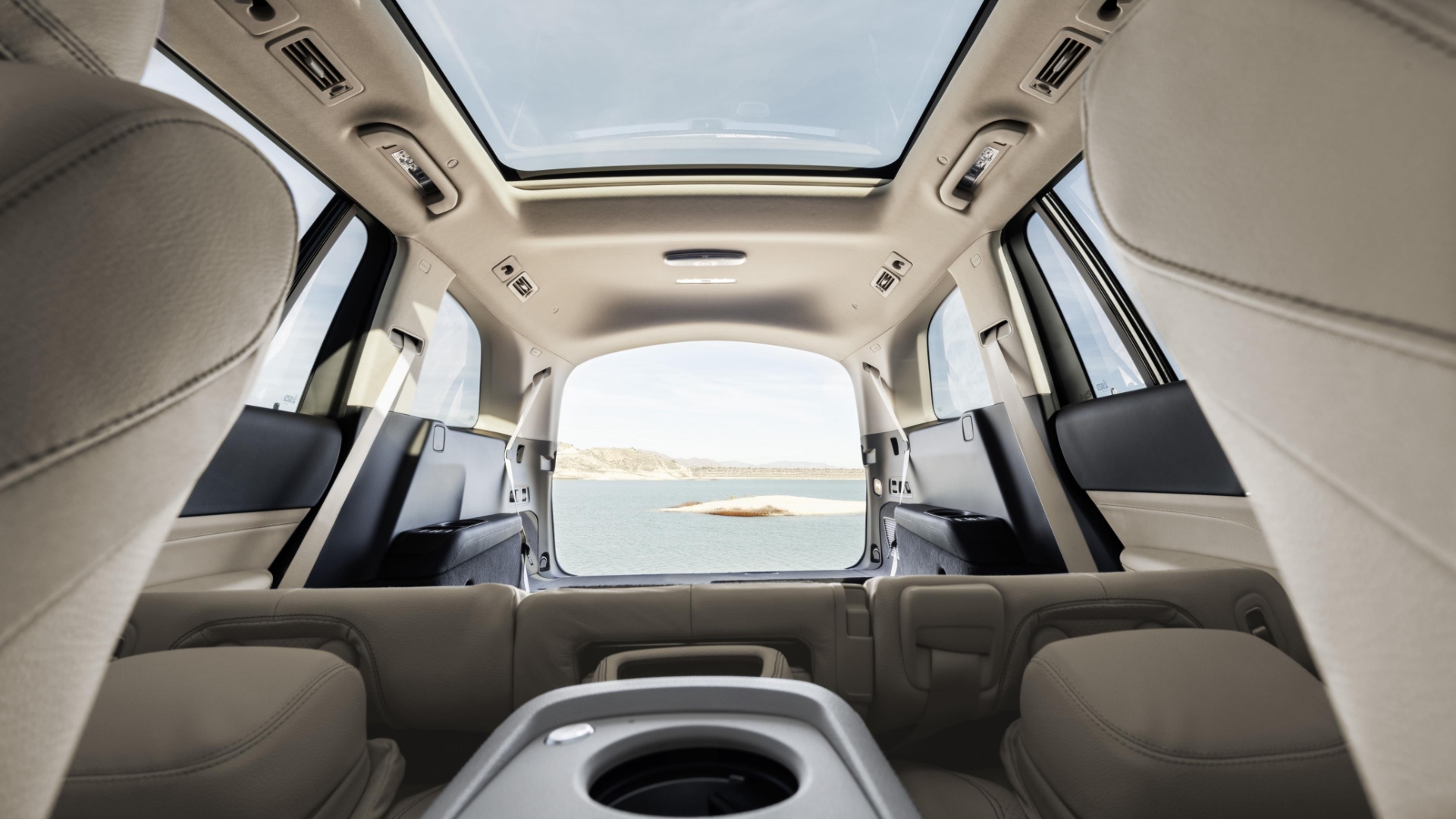 A stunningly appointed cabin is also a lot more spacious than the previous GLS. This, thanks to a 60mm longer wheelbase and 22mm of extra width. That means there’s a lot more space for passengers, both in the middle and in the third row. Legroom is increased in the second row by 87mm. All the seats are electrically movable, too, while the boot has a maximum of 2,400 litres of space with the seats folded flat. Truthfully, you won’t suffer for space in either of these cars. 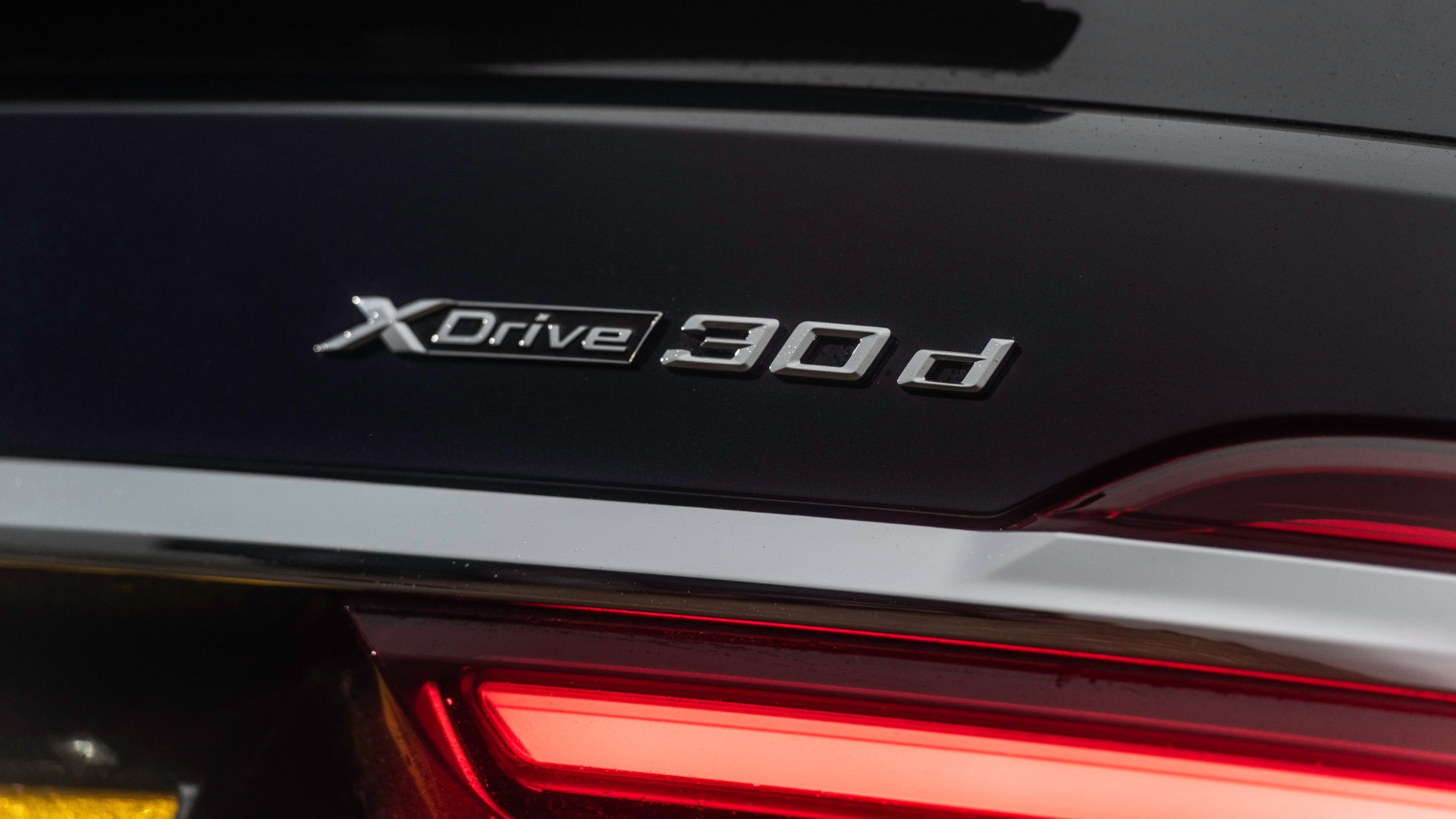 The BMW has a very strong lineup of engines. In the UK, they’re all six-pots, with two diesels and a single petrol. The 265hp 3.0-litre diesel opens up the range, while a 340hp petrol sits in the middle. The kicker though, that’s going to give Mercedes a hard time, is the M50d diesel. This quad-turbo diesel monster produces 400hp while also delivering over 40mpg. No, the BMW’s engine range doesn’t feature clever hybrid tech, but that diesel is a class act. No word yet on if we’ll be getting a proper X7 M, though. We use ‘proper’ very lightly… 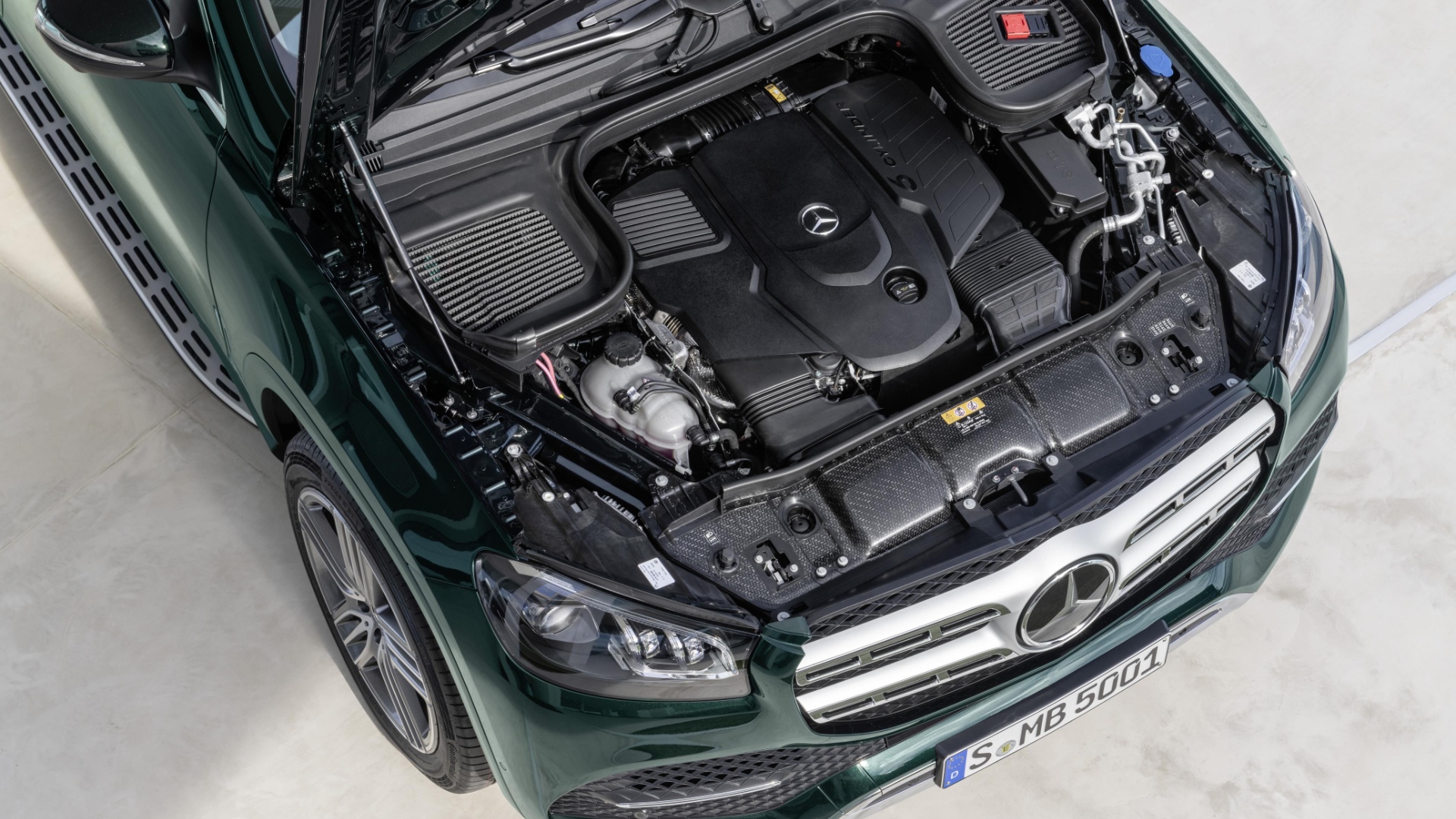 Big busses need muscular powerplants and the Mercedes has no intention of sending the GLS into battle short-handed. That’s why every petrol engine available in the GLS will come with Mercedes’s clever integrated starter and EQ tech. That means both the 489hp V8 and the 367hp straight-six come with a 48-volt system that shortens the engine’s overhangs and boosts power by up to 22hp for short periods. The six-pot is, unfortunately, not coming to the EU. Conventional diesels ought to appeal more to us Brits. Both 286hp and 330hp versions of the OM 656 six-cylinder will be available. We fully expect more extensively hybridised variants to join in time, as well as a snorting GLS 63 AMG performance version. 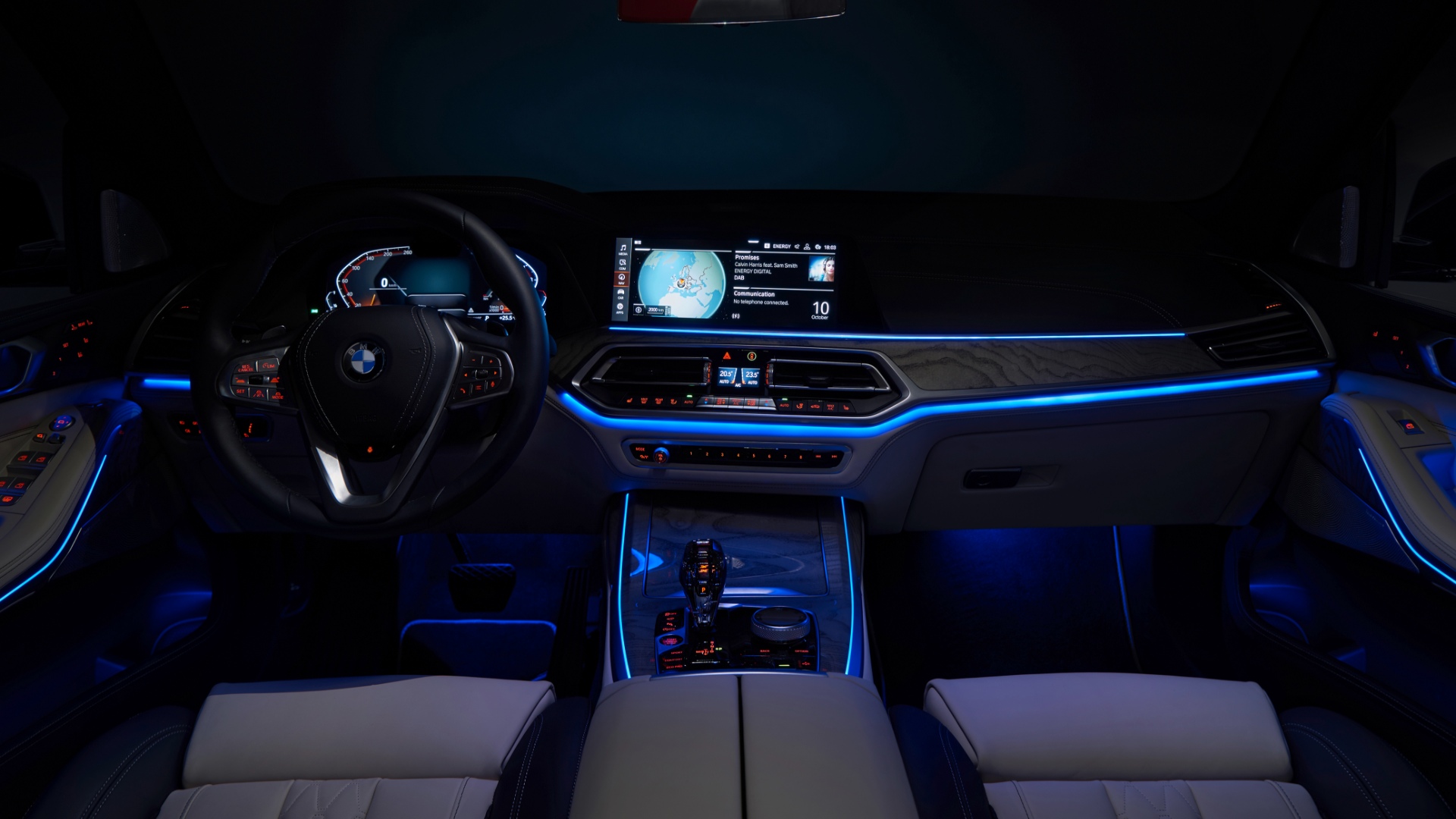 BMW are never ones to shy away from loading a car with technology. The X7, being its biggest and most luxurious offering, in tandem with the 7 Series, gets the latest and best. Heavy-hitting partial autonomous drive, BMW’s very latest interior operating system, otherwise known as BMW Intelligent Personal Assistant, comes as standard. Pretty much all the toys you could get your hands on in the Mercedes are optionable in the BMW. 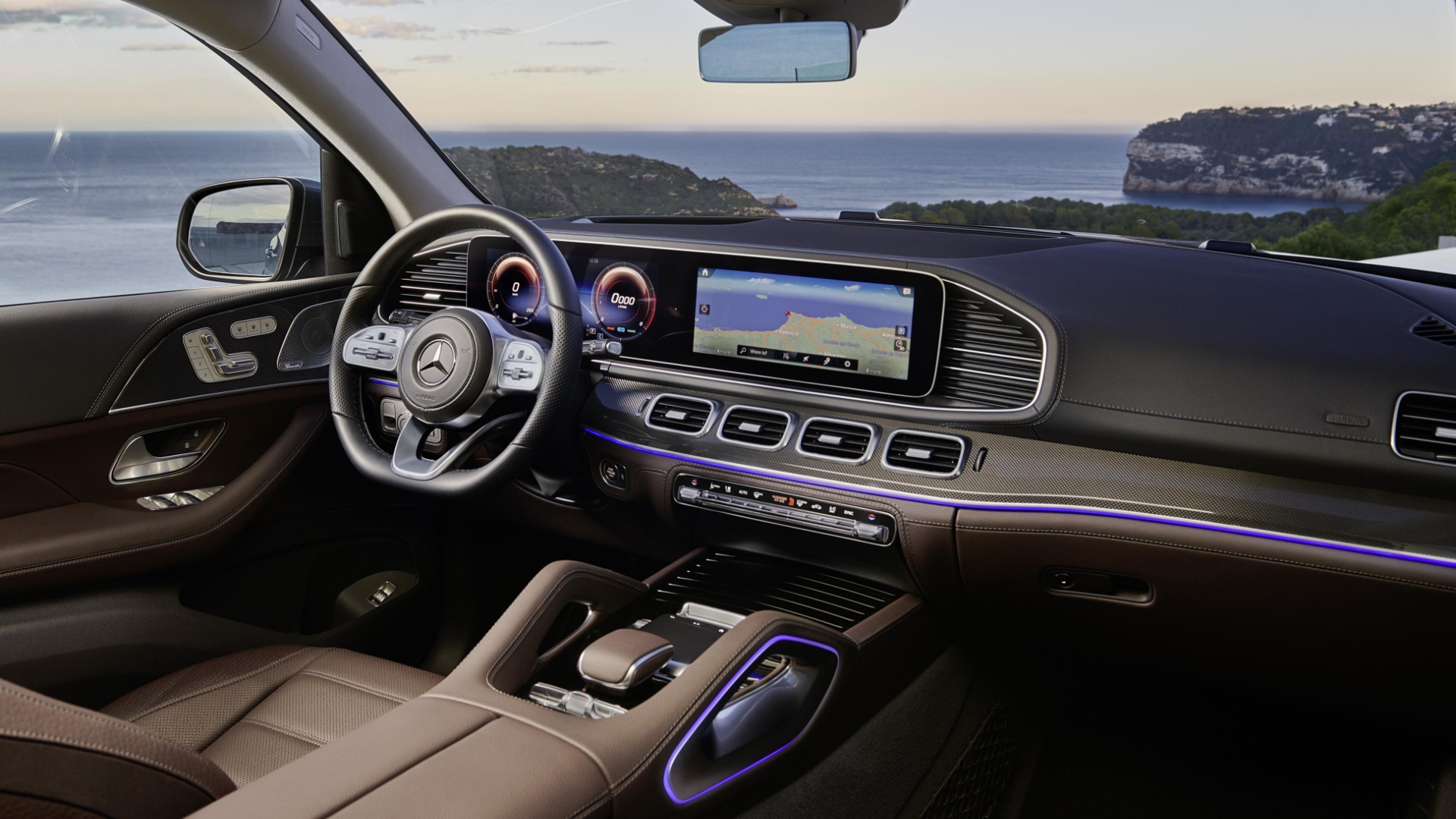 A pre-requisite for any pretender to S-Class status is a heavy-duty arsenal of technology. Luckily, this pretender comes from within Mercedes itself. The GLS comes loaded with amazing tech, including fully electric seating – yes, for all seven seats – and a ‘car wash mode’. That makes getting this considerably sizeable machine clean easier for driver and car wash attendants alike. Naturally, GLS also comes loaded with autonomous tech. The adaptive cruise control can read road signs and adapt to traffic conditions based on data from the sat-nav. The mild hybrid tech deployed on the petrol engines is revolutionary, too. Clever stuff! 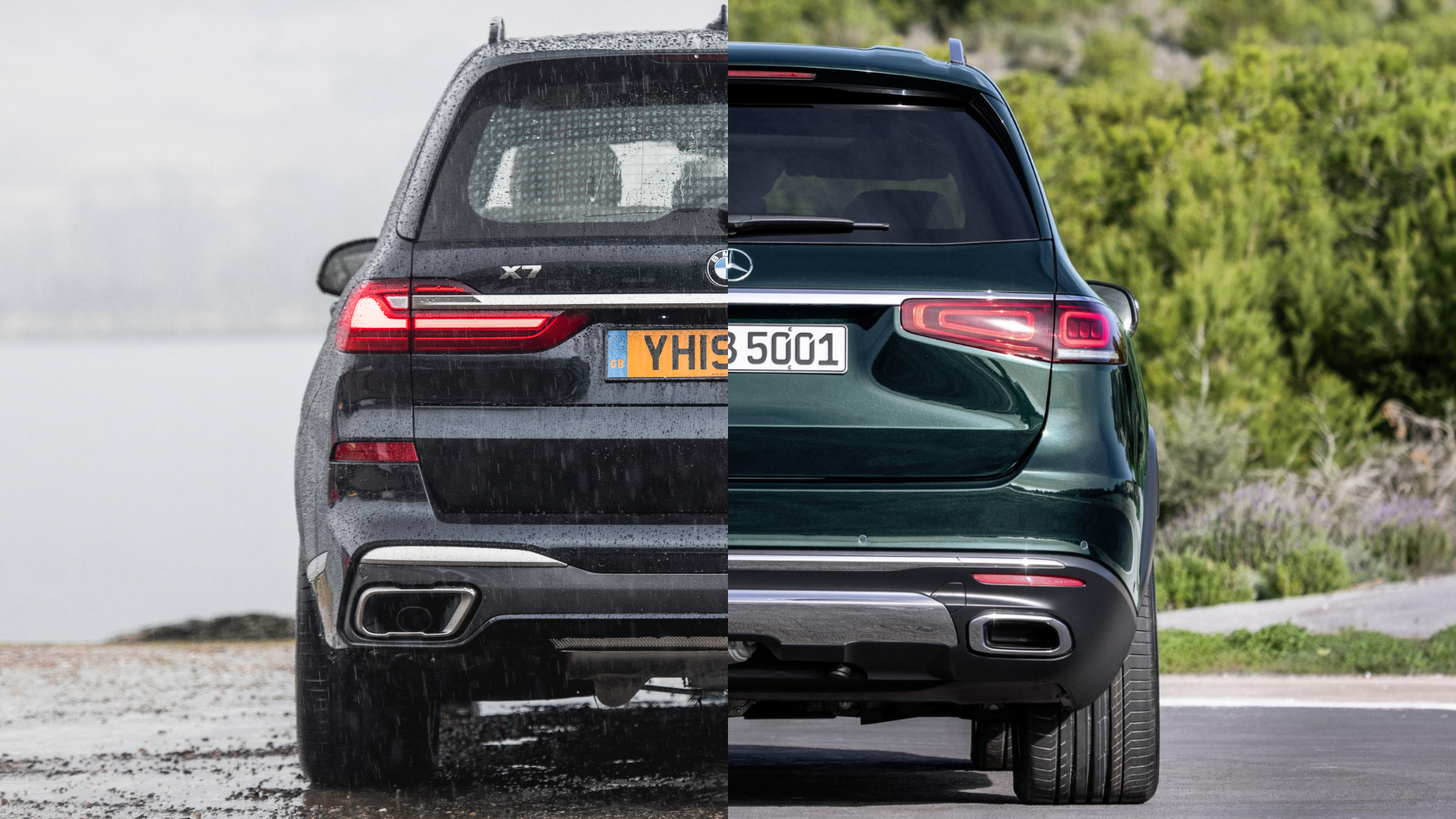 This will be a strong point of contention between these cars. Nevertheless, you can almost guarantee that they both undercut the Range Rover by a decent amount. You can have an X7 from £72,000 for the entry-level diesel, going up to £74,000 for the mid-range petrol. The big-banger M50d will set you back £87,000. Expect the Mercedes to follow these prices closely and perhaps be a touch more expensive.