The McLaren Speedtail is the fastest McLaren ever built. Like the original F1, it has a central seating position; it also has 1,050hp... 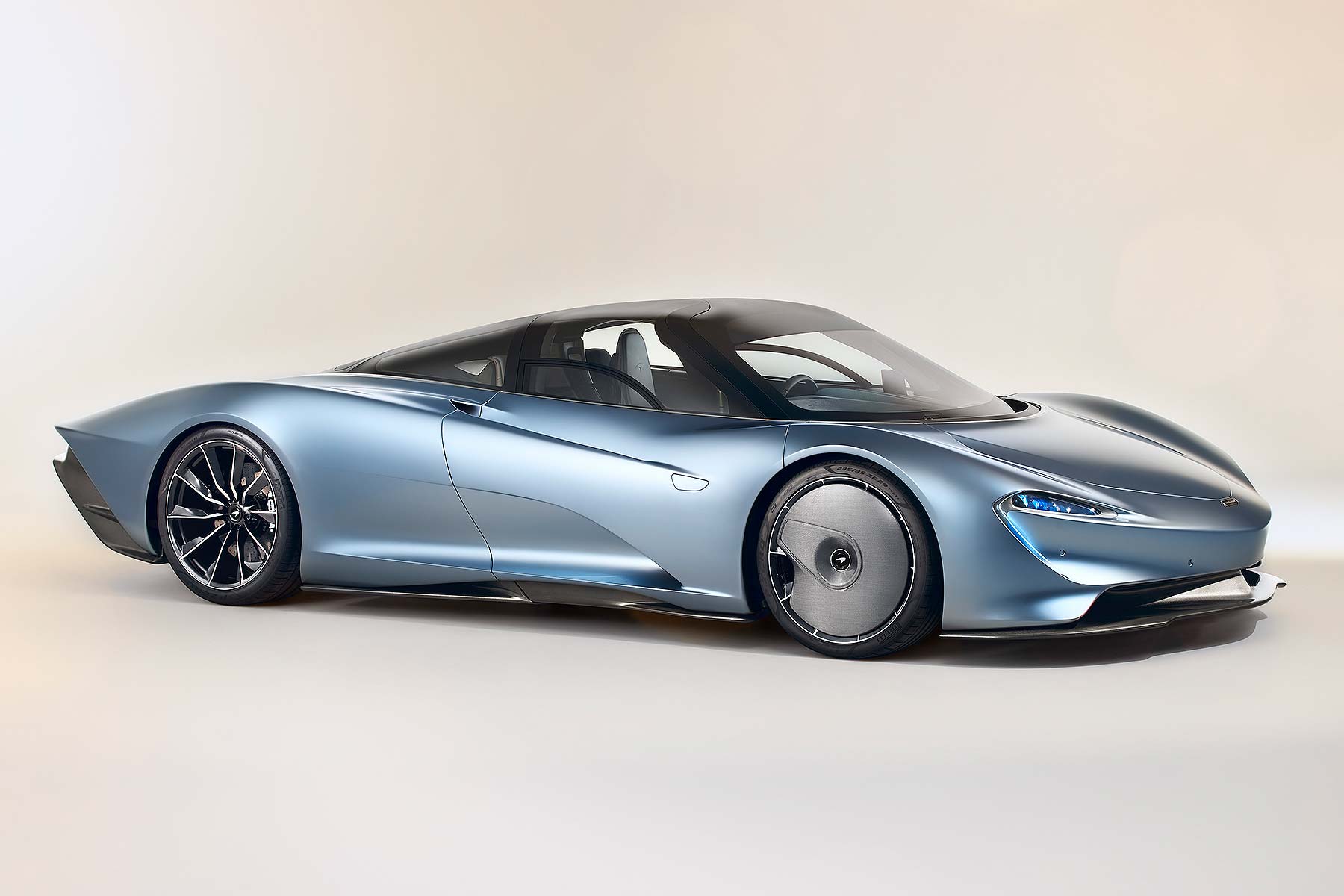 The stunning McLaren Speedtail is the first ‘hyper-GT’ the firm has ever made. What a way to honour its first ever road car, the McLaren F1. Needless to say, even at £2.1 million, all 106 have already been sold.

McLaren is making just 106 Speedtail because that’s how many original F1s it built (hard to believe, huh?). It shares that car’s central driving position and three-seat layout too, but don’t be fooled. This is anything but a retro rebirth. 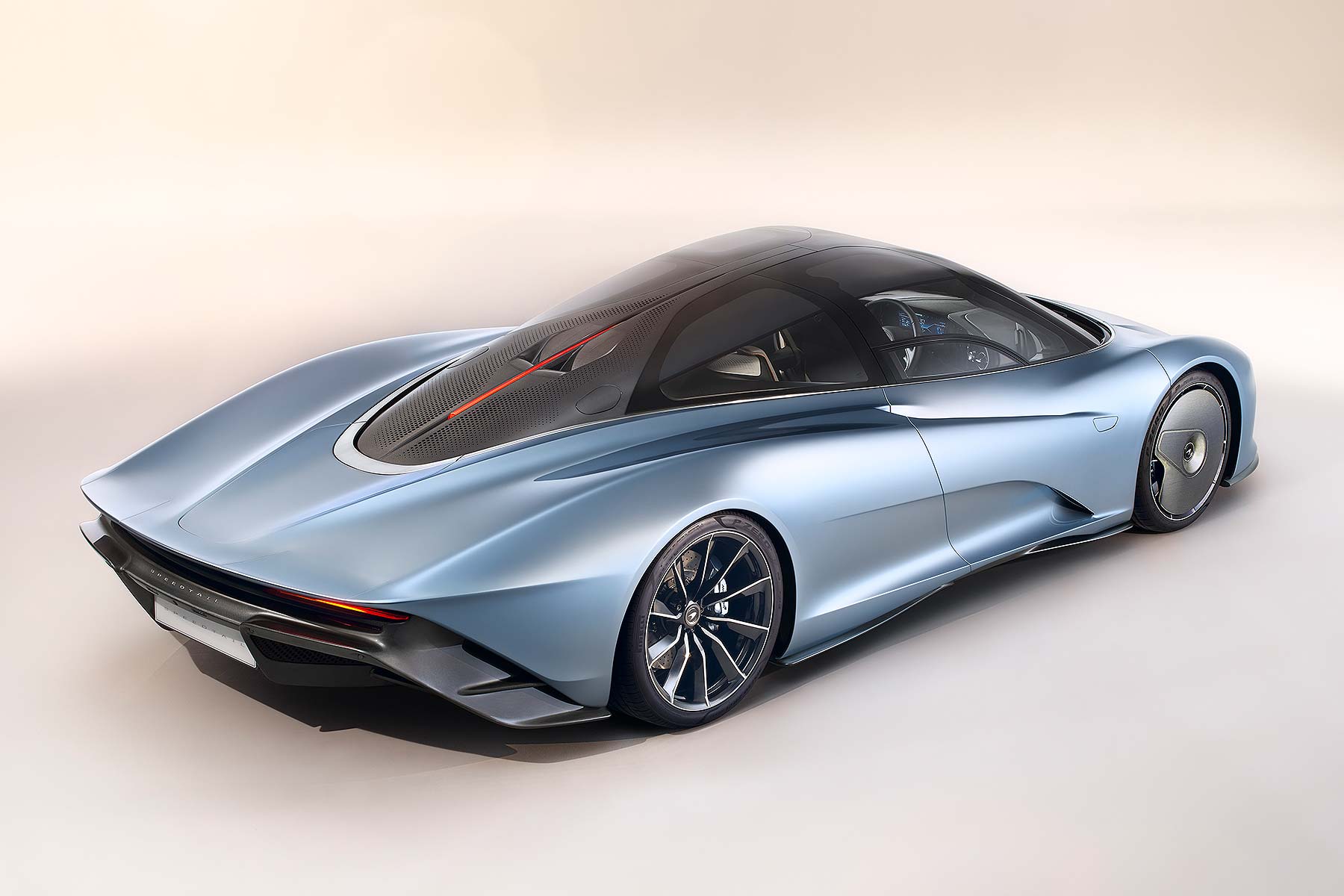 The reason it’s called Speedtail, and not F1, is because it’s the fastest McLaren the British firm’s ever built: it does 250mph flat-out. That’s 403 km/h in Euro-speak. A 1,050hp petrol-electric drivetrain gives it the firepower to reach this, and also renders 0-62mph times irrelevant. 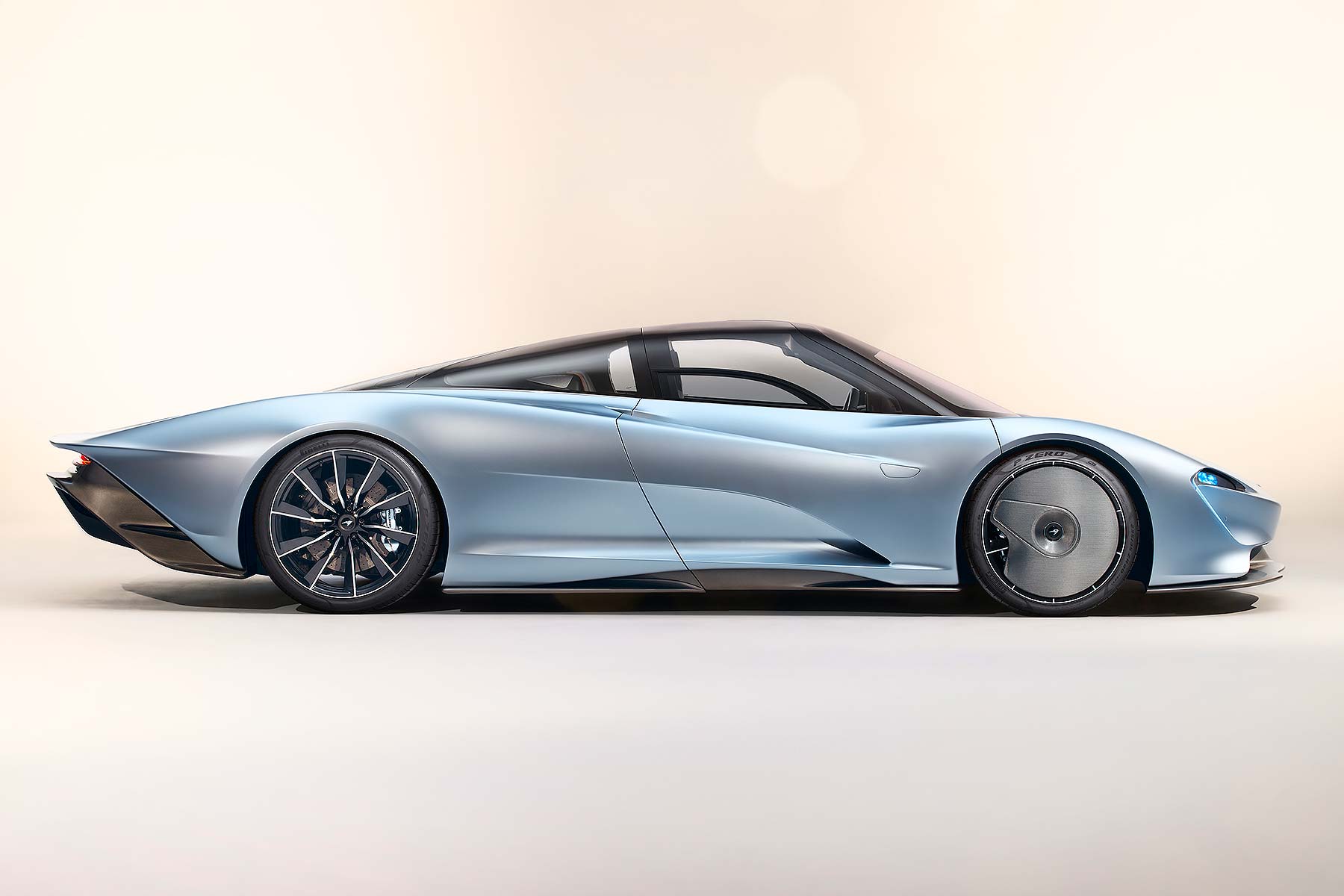 Speedtail in name, Speedtail in nature: the cockpit is teardrop-shaped and the rear end is elongated to a staggering degree – at 5.2 metres (17 feet), it’s longer than many limousines. The body, like the carbon fibre structure, is made entirely from carbon fibre.

The front wheel aero-covers make it look like a world land speed record car, as does the active aerodynamic features including McLaren-patented active rear ailerons. There aren’t even any door mirrors, so as not to create drag: the Speedtail has digital rear-view cameras instead. 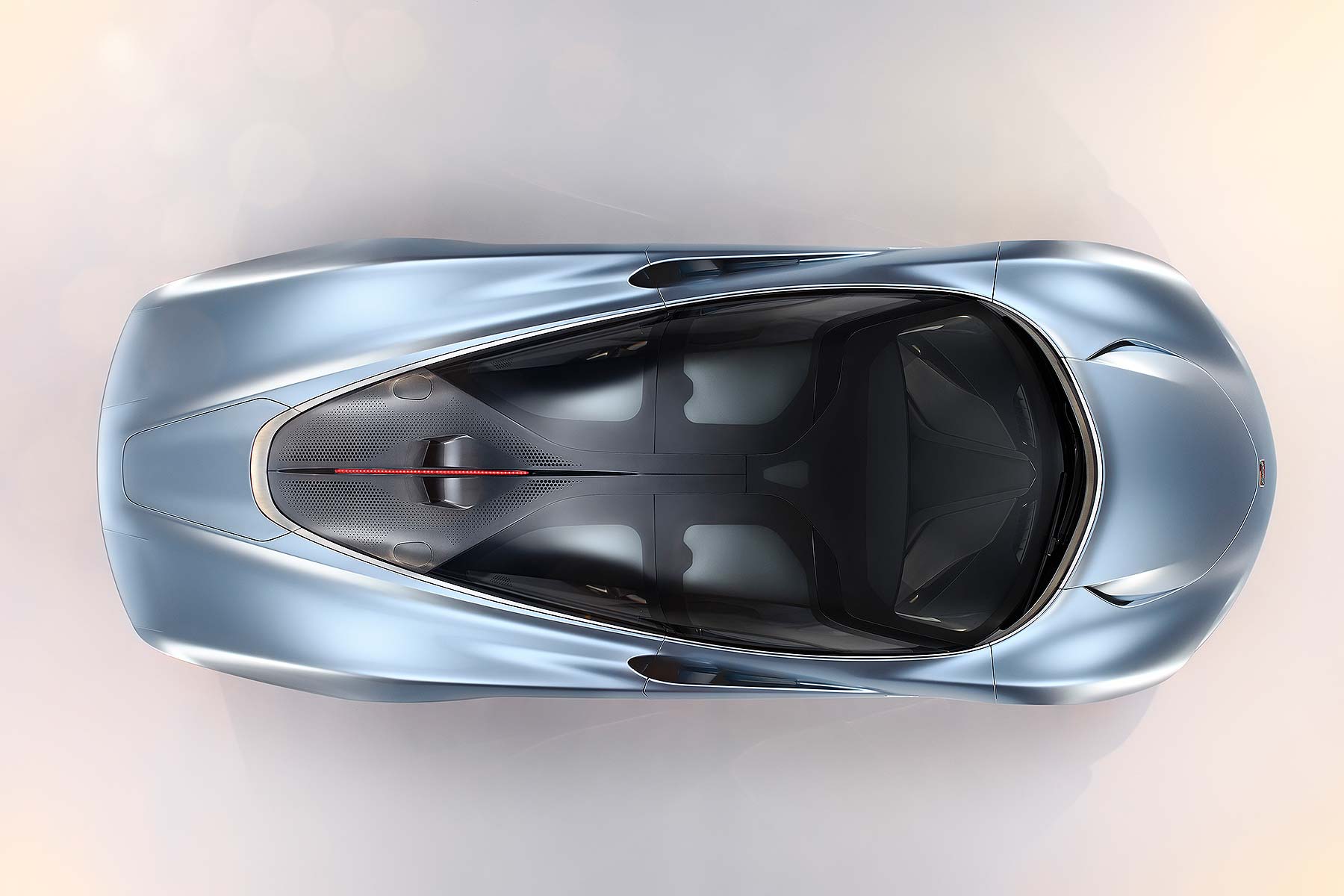 McLaren’s installed a Velocity mode. This switches the engine into its top power setting, activates the active aero and also lowers the Speedtail by 35mm to eek out that 250mph top speed. This takes it down to just 1,120mm tall.

Pirelli’s designed a special set of P-Zero tyres for McLaren to cope with all that speed and power. 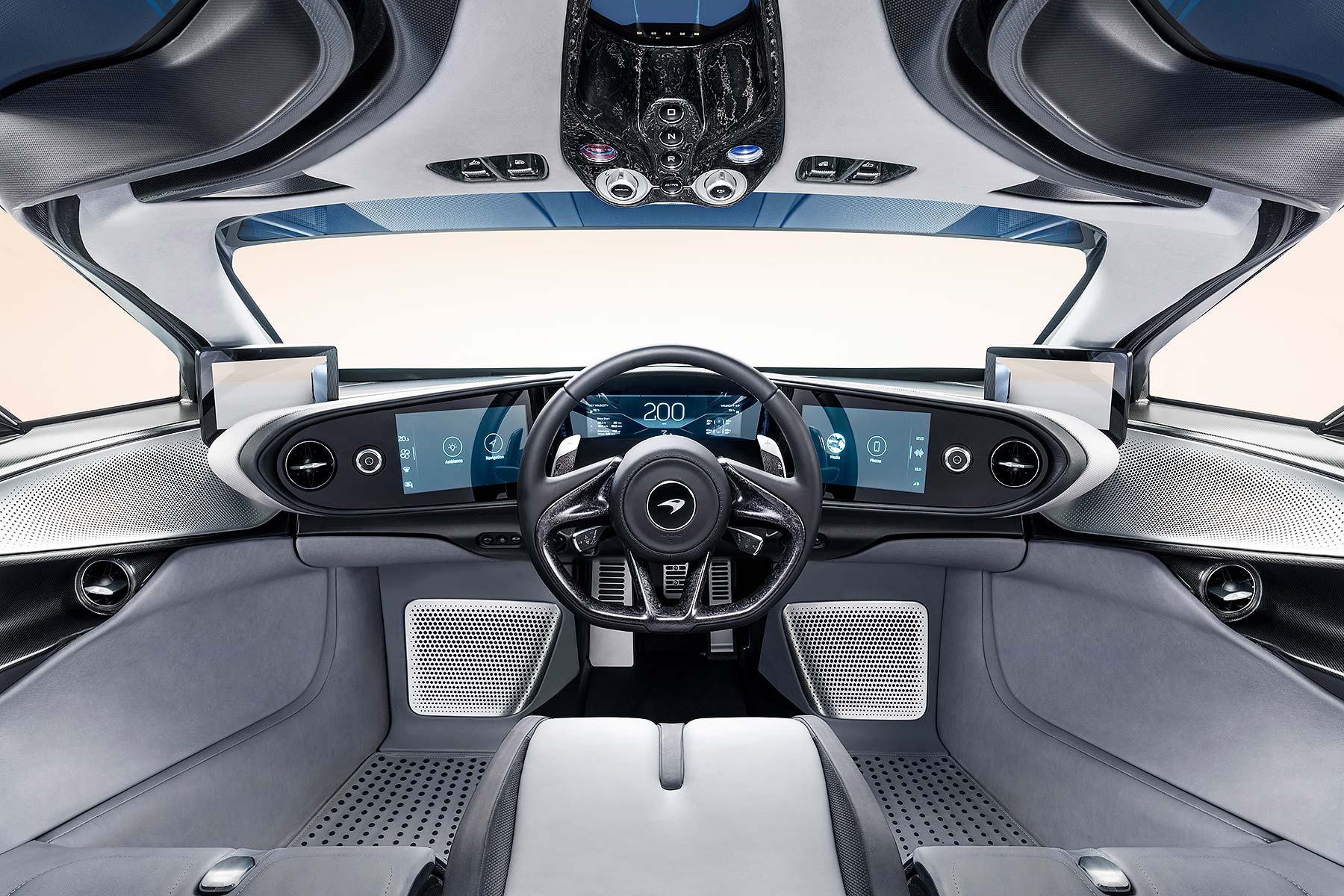 The cabin is fully glazed and revealed by trick dihedral doors – power-operated, naturally. Detail engineering abounds: McLaren’s fitted clever electrochromic glass that darkens the top of the windscreen at the touch of a button – so it doesn’t need sun visors. It’s a “new level of technical luxury”. 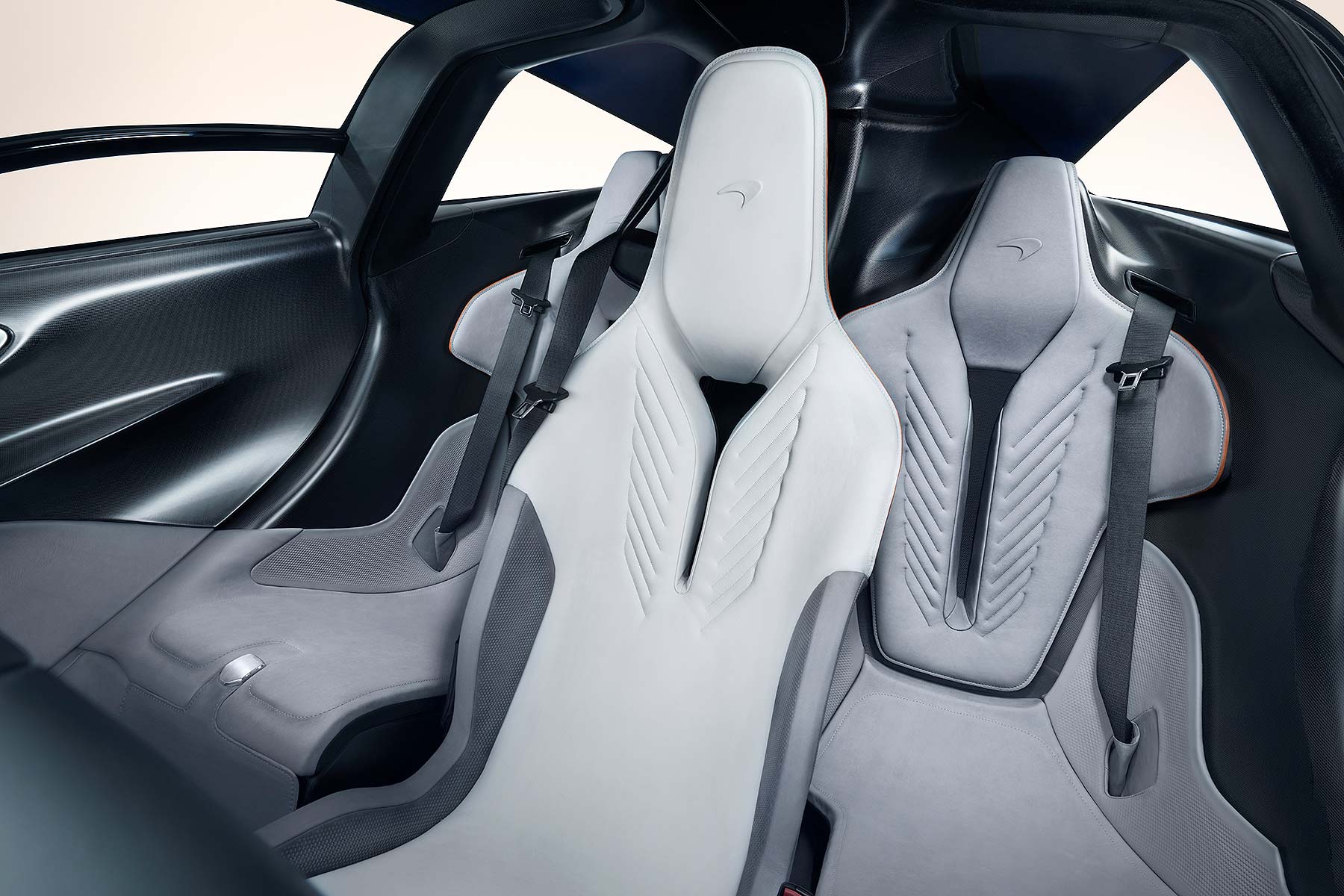 “McLaren has never built a vehicle like the Speedtail before,” said McLaren Automotive CEO Mike Flewitt. “The Speedtail is the ultimate McLaren road car; a fusion of art and science that combines an astonishing maximum speed with an iconic central driving position and a truly pioneering approach to bespoke personalisation.”

It intentionally looks like sleek, record-breaking ‘streamliners’, he said, and “the luxurious three-seat cockpit offers a subline combination of an incredible driving experience, unmatched individualism and innovative materials never seen before in a road-going vehicle”.

What a way to honour the original mighty McLaren. The lucky owners who are recently gathered in London for an exclusive (and private) first viewing are 106 of the most fortunate petrolheads on the planet.

Used electric cars are going UP in value

New research by Cargurus has demonstrated the true strength of popularity that electric cars have garnered in 2019. Some have actually risen in value
Read more

Used electric car searches up 680% on day of 2040 announcement

Coventry could pay residents to scrap their cars

A new scheme could see Coventry motorists offered mobility credits worth between £1,500 and £3,000 to scrap their old cars.
Read more

We explain how to maintain your vehicle's brakes, battery and security during the coronavirus lockdown. It might be worth investing in a trickle charger.
Read more
Advice