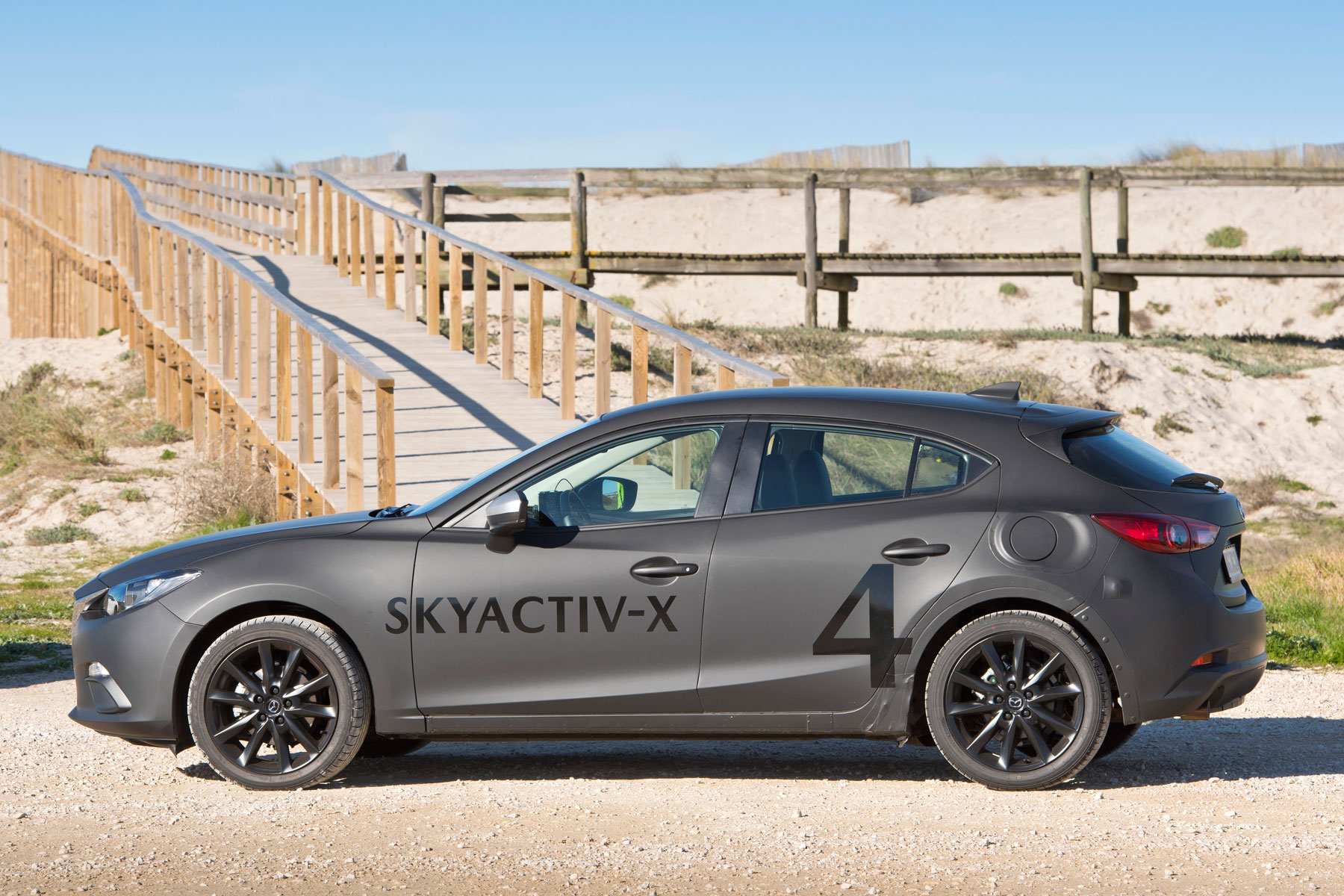 Imagine if you could drive a car powered by a petrol engine, with all the benefits that brings – and some of the best characteristics of a diesel, too. The free-revving nature of a petrol, the lovely non-planet-killing emissions, the refinement and the ease of refuelling, mixed with diesel low-range torque and excellent fuel economy.

If this was possible, it could almost be the answer to everything. It is possible, says Mazda.

Before we go any further, let’s take a look at how Mazda likes to do things differently. It’s snubbed small, turbocharged petrol engines in favour of high-compression naturally-aspirated units in the past, and it’s being deliberately cautious about jumping on the electrification bandwagon.

Why? It looks at what it describes as the ‘well to wheel’ emissions of its cars. “With two thirds of global electricity production currently relying on the use of fossil fuels, Mazda believes regulations placing the emissions of an EV at zero to be disingenuous,” says the manufacturer.

Driving an early prototype of the new Mazda 3 today. It’s got the body of the current model but all new underneath. New Skyactiv-X petrol offers diesel-like economy and mild hybrid electrification, says Mazda. pic.twitter.com/2hP8iUnd6x

Essentially, legislation concentrates on tailpipe emissions. And while it’s all well and good driving an EV and feeling a little smug about doing your bit for the planet, if that electricity comes from polluting power stations, it’s arguably no better than driving a conventional petrol or diesel car. And that’s before we go into the toxic emissions involved in creating batteries.

Mazda’s also reserved about moving towards ride-sharing, discouraging car ownership and autonomous vehicles. Backward? It prefers to think that it’s actually listening to what customers want, and it’s certainly refreshing to see a manufacturer waiting for technology to develop rather than chucking money at something that isn’t necessarily the future.

So, that ‘best of both worlds’ thing we were on about… Mazda is working on a petrol engine that it says combines petrol and diesel engine technology to offer the benefits of both, with few of the disadvantages. Called the Skyactiv-X, the 2.0-litre four-cylinder petrol was first announced with the Kai concept car at last year’s Tokyo Motor Show, and is likely to make its production debut in the forthcoming Mazda 3.

How does Mazda’s Skyactiv-X engine work? 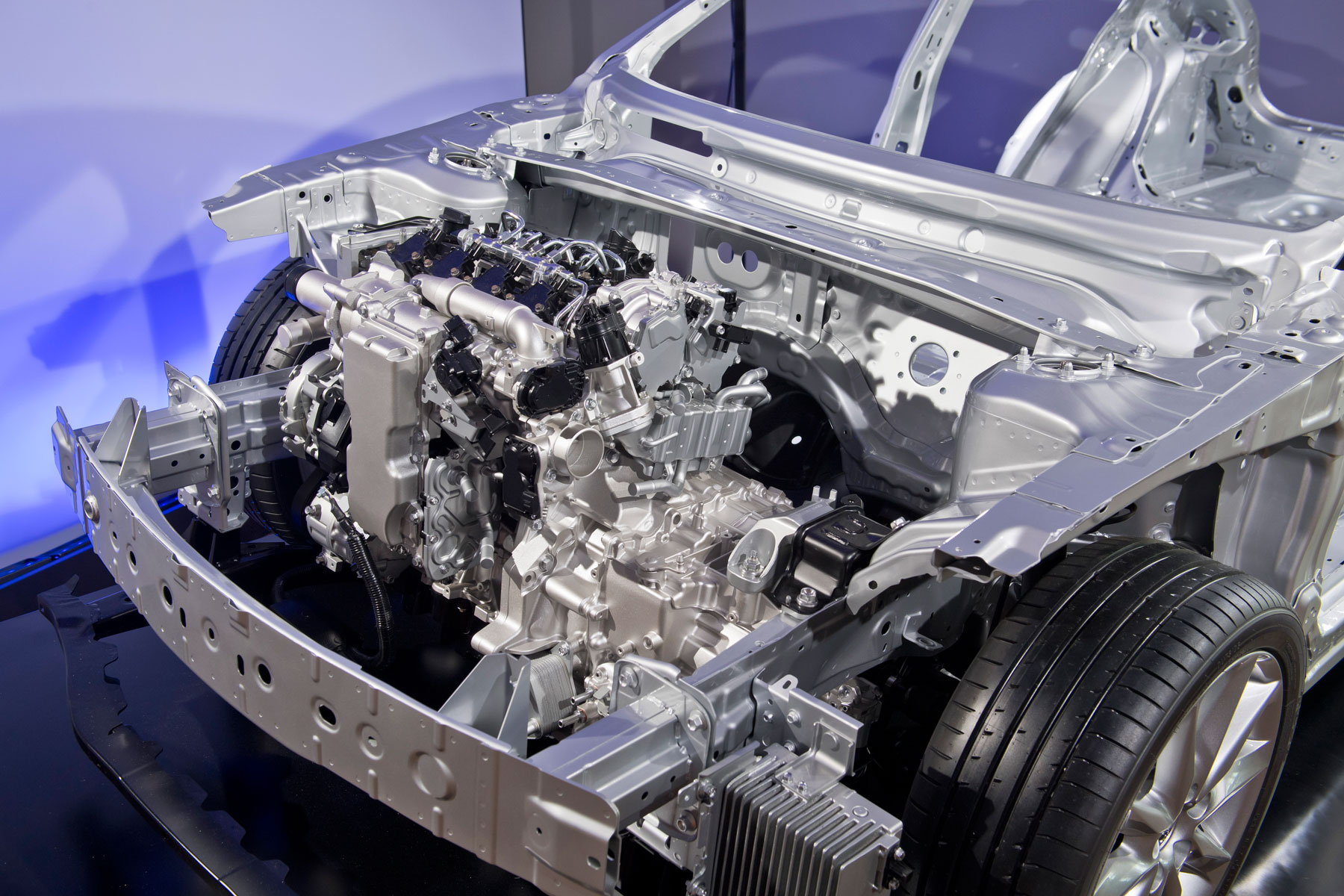 This is where this all gets a little bit ‘science lesson’. The Skyactiv-X is unusual in that it uses a much higher compression ratio than most petrol engines. This means that, like diesel engines, a spark can be created naturally when the air and fuel are compressed, rather than relying on spark plugs.

However, spark plugs are used in the Skyactiv-X to create what Mazda describes as a ‘fireball’ in the centre of the cylinder. With a leaner fuel-to-air ratio, this fireball provides a greater amount of power while burning around 20-30% less fuel than a conventional petrol engine.

The result? Better fuel consumption and lower CO2 emissions. It’s too early for Mazda to provide any official figures, but it does say it’ll be on par with a diesel. The current 150hp 2.2-litre SkyActiv D returns a combined 68.9mpg. If the same can be achieved under petrol power, the new Skyactiv-X has potential to return groundbreaking petrol fuel economy. 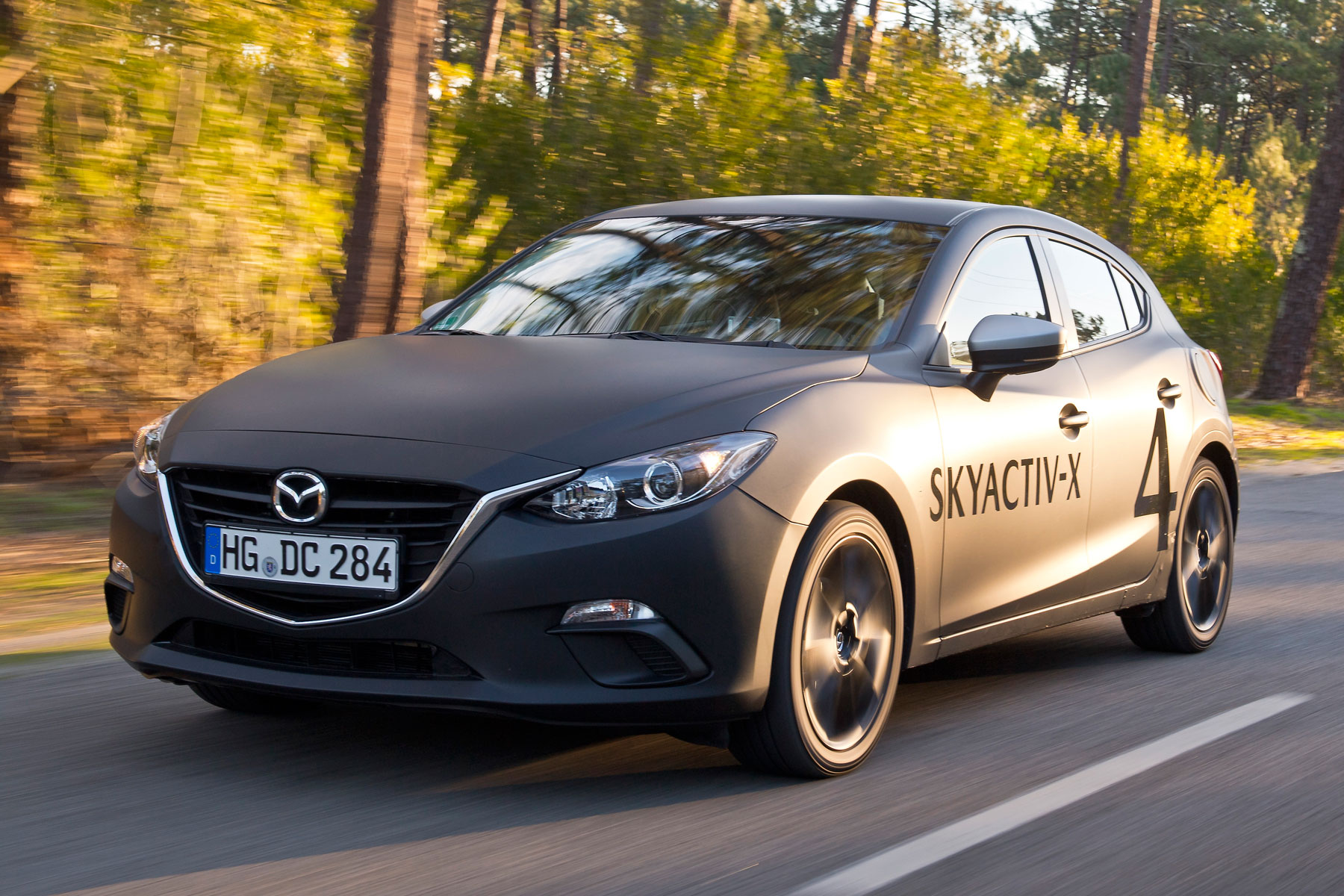 This might look like the current Mazda 3, but it’s essentially a very early prototype of the new model, due in 2019. The platform is new, the interior is new, the engine is (obviously) new, the exterior is… well, the old model’s body grafted on for disguise purposes.

Fortunately, it’s the engine that we’re most interested in for now. Mazda’s engineers are aiming towards 190hp for the 2.0-litre petrol, but it’s not quite there yet. Despite being down on power compared with the finished version, it’s clearly a torquey unit. Accelerate in almost any gear and it will pull, although it doesn’t seem to be quite as free-revving as the current model in 165hp flavour.

It’s much more refined than a diesel, and a new, more adjustable seat design should make it more comfortable for longer journeys. Alterations to the chassis in the form of more bracing and softer tyre sidewalls don’t, on first impressions, appear to have hindered the car’s already class-leading handling.

It’s difficult to draw firm conclusions from our brief drive in the prototype, but it’s fair to say we’re looking forward to seeing the finished version in a year or so. The current Mazda 3 is one of our favourite C-segment hatchbacks, making it a good grounding for the replacement Golf-rival in 2019. 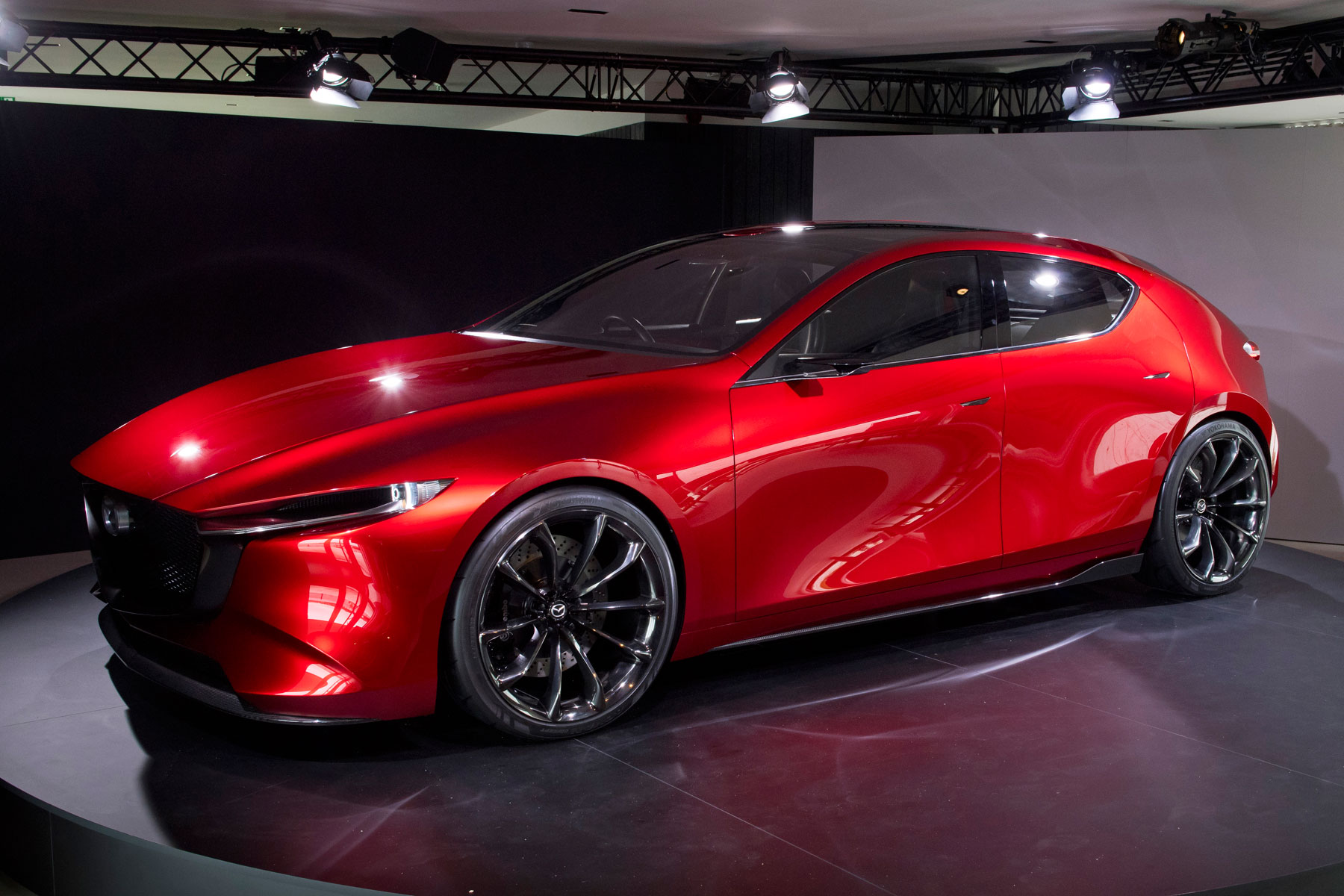 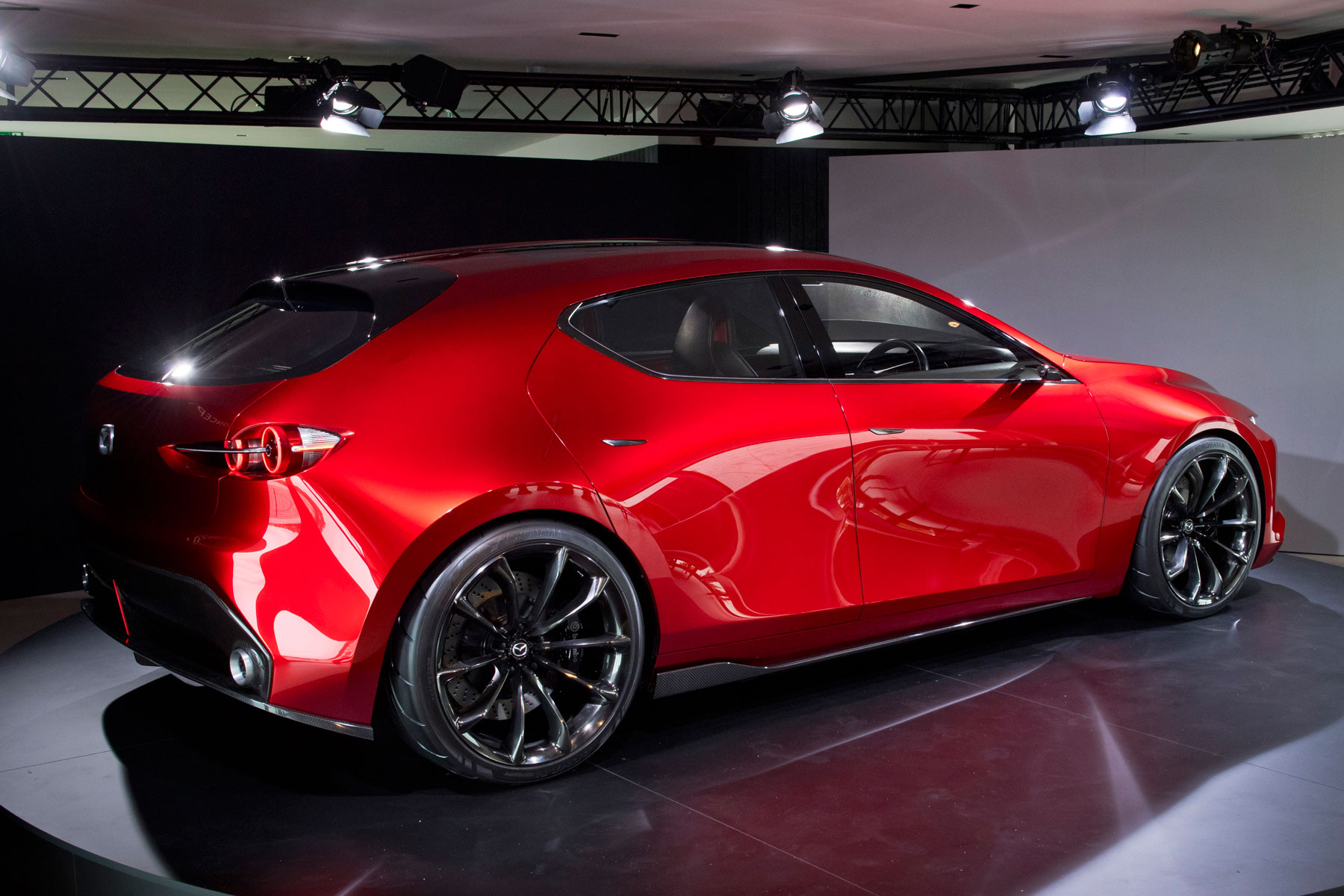 The new Mazda 3 is likely to take styling cues from the Kai concept car when it arrives in 2019.

Although Mazda hasn’t confirmed that the Kai previews a production model, the five-door hatchback does share the new 3’s Skyactiv architecture and Skyactiv-X engine.

The Kai has been designed with traditional methods using clay. It features Mazda’s Kodo design language and ‘less is more’ philosophy. Its interior follows a similar theme, playing on the firm’s ‘Jinbai Ittai’ connection between car and driver.

As such, there’s a clear divide between the driver and front-seat passenger, while there are two separate seats in the rear.

At 4,420mm long, 1,855mm wide and 1,375mm tall, the Mazda Kai is longer, wider and lower than the current Mazda 3. We doubt the 20-inch alloys of the concept will make it onto the production car, but they form part of a very likeable design.