Roadster love: a brief history of the Mazda MX-5

After 30 years and four generations, the Mazda MX-5 is the world’s best-selling two-seater convertible 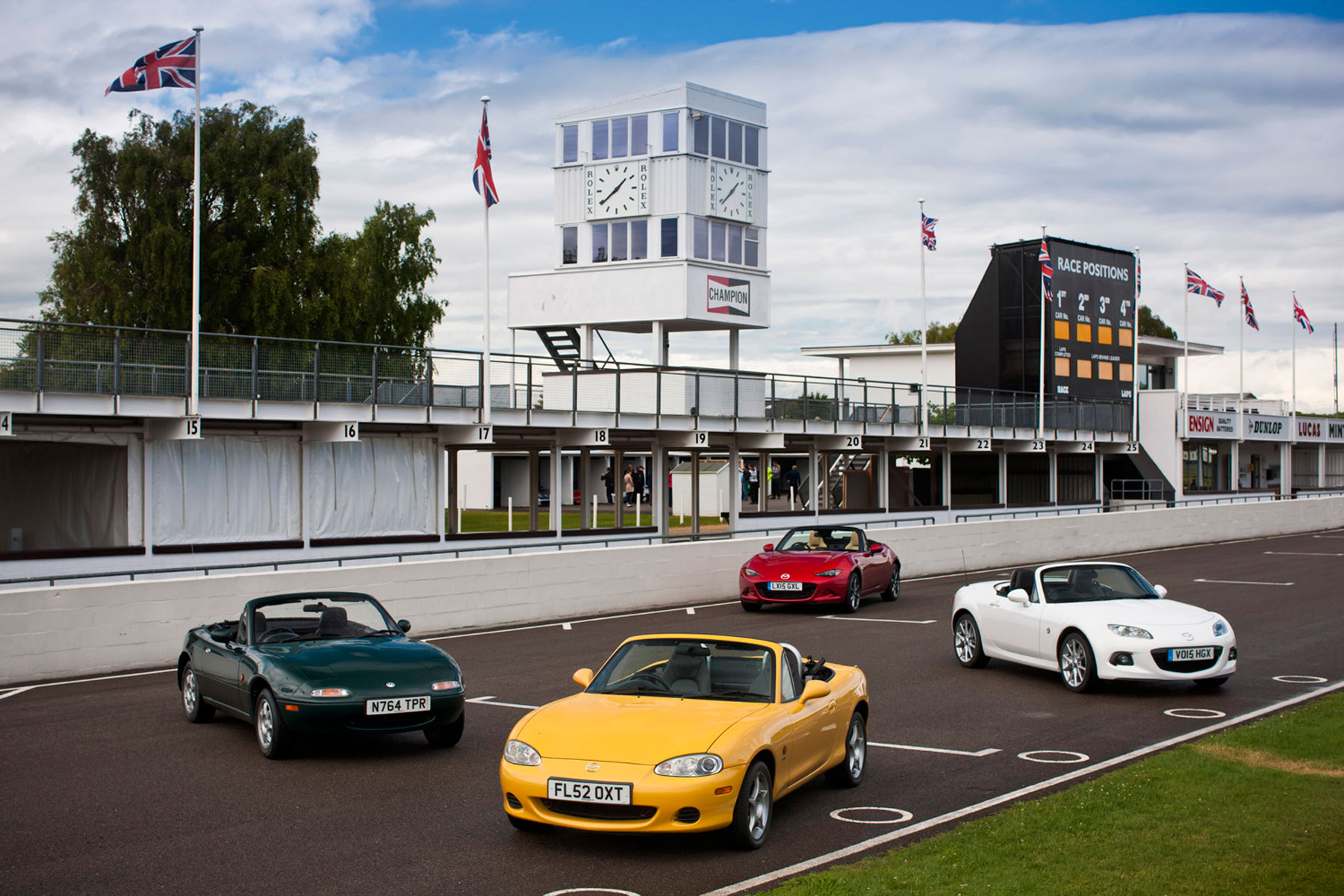 Whether you know it as the Mazda MX-5, Miata, Roadster or Eunos Roadster, this is the world’s best-selling two-seater convertible. Not bad for a little roadster with three decades and four generations to its name. With this in mind, we chart the history of the Mazda in 30 pictures, culminating in the arrival of the 2019 model-year MX-5. 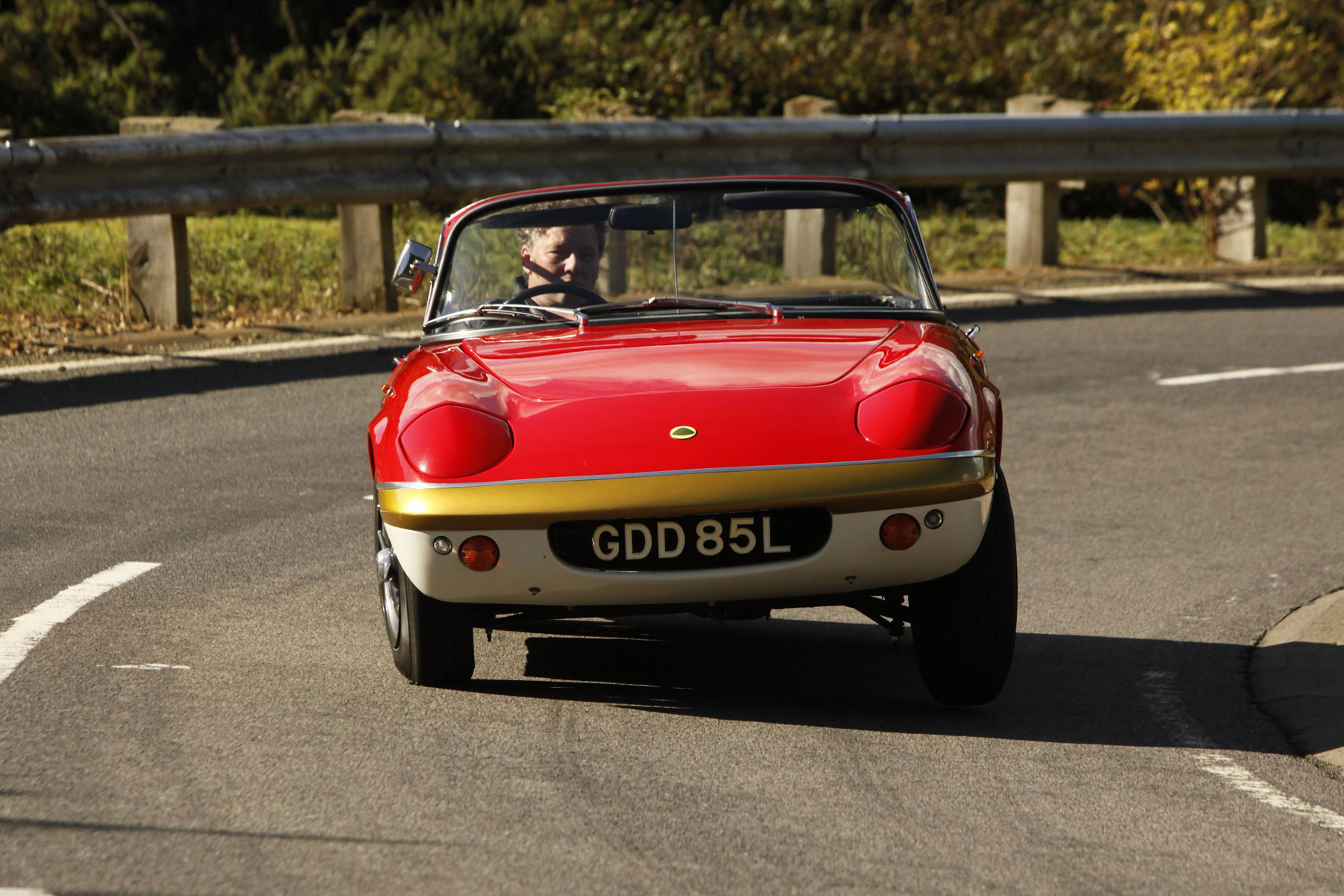 The story goes that American journalist Bob Hall met with Mazda’s head of research and development, Kenichi Yamamoto, in 1979. Hall was a fan of British sports cars such as the MGB and Lotus Elan, but irritated by their poor reliability. As such, he explained that he thought Mazda should build a simple, back-to-basics sports car with Japanese reliability. The seed was planted. 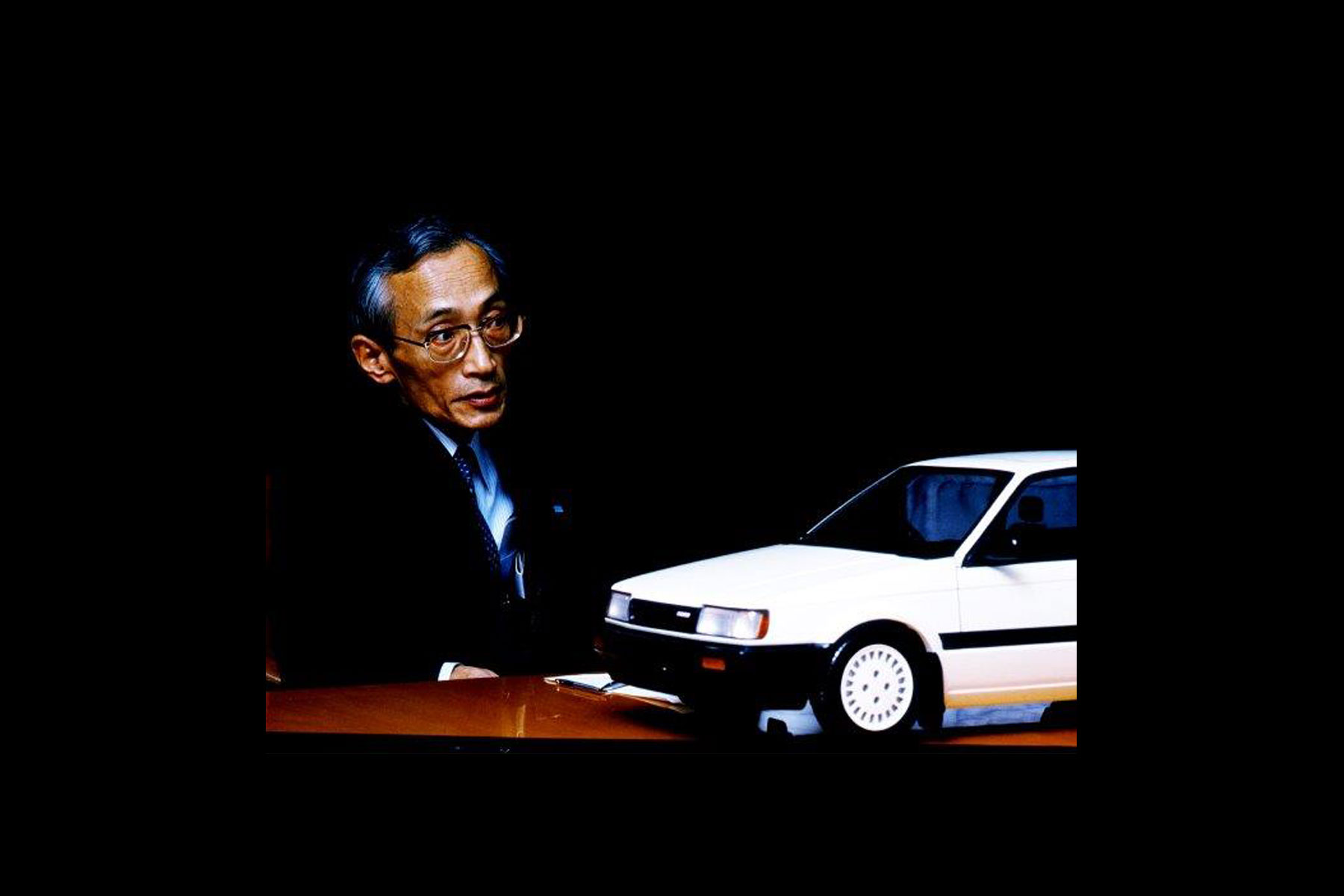 While Yamamoto (pictured) was convinced, persuading others within the company was difficult. It was unlike anything Mazda had done previously, and niche models never make a great deal of money. Fortunately, in 1984, Yamamoto was promoted to president of Mazda Motor Corporation. Hall was employed to kickstart the project. 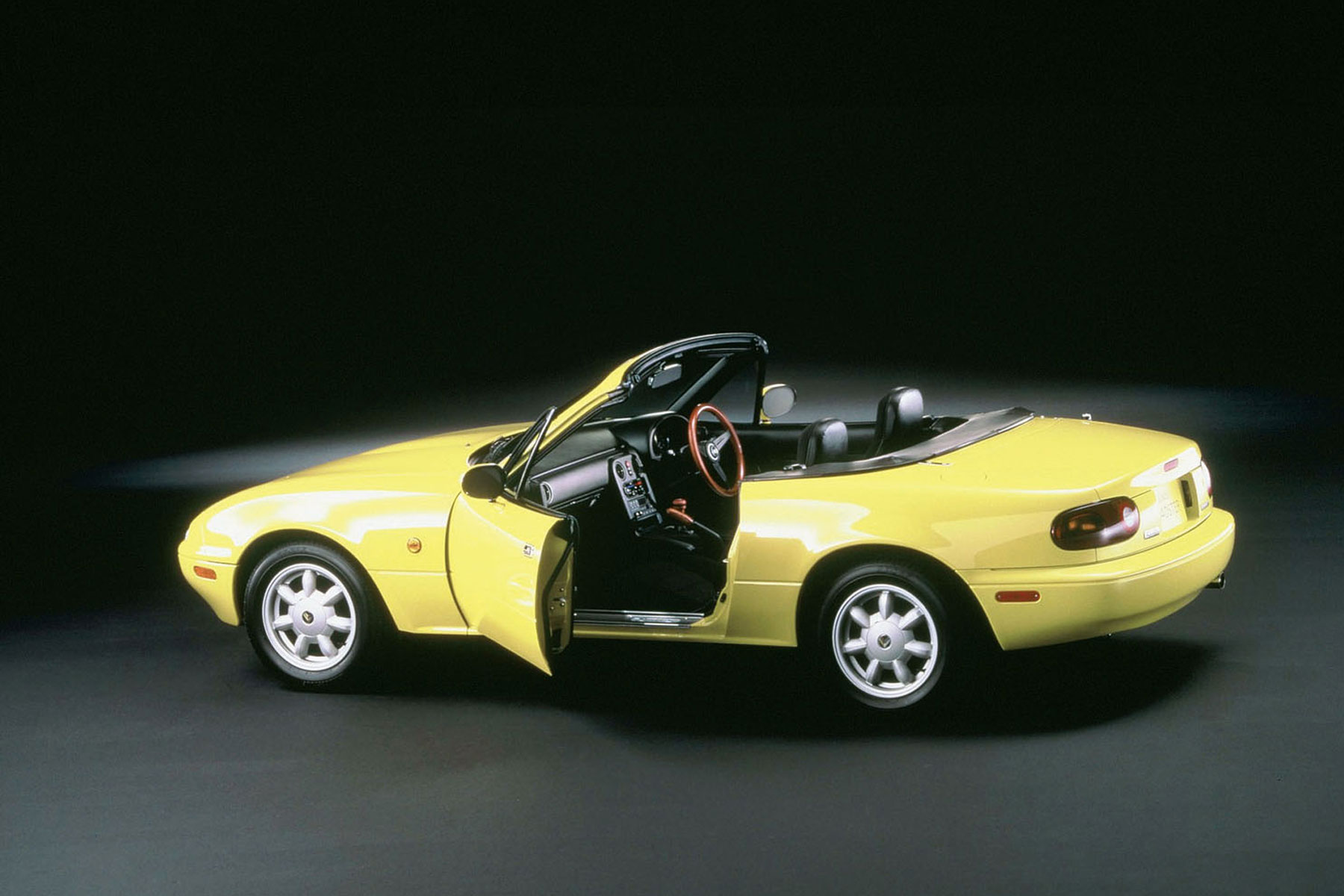 Today, the MX-5 is known for its excellent rear-wheel-drive handling. But it wasn’t always going to be a rear-driver. Developed at a time when companies were discovering the benefits of front-engined, front-wheel-drive layouts, Mazda seriously considered going down this route with the MX-5. Styling proposals for three different drivetrain layouts were submitted, with a rear-wheel-drive concept designed in California chosen. 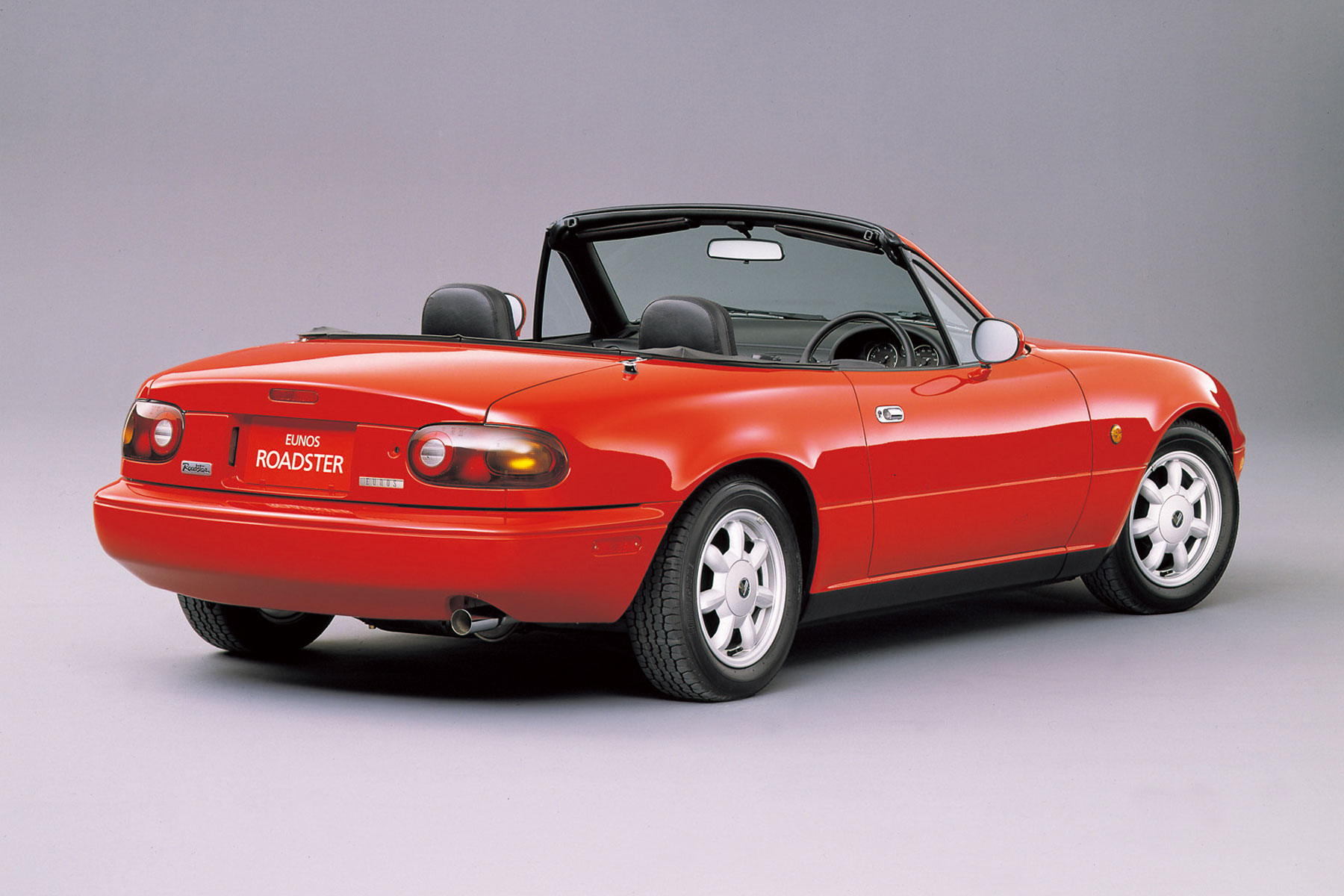 As a niche model, the budget was limited. The 1.6-litre petrol engine from a Mazda 323 was picked for its low weight and affordability, while the 115hp output was transferred to the rear wheels using a five-speed manual gearbox from an RX-7. The suspension used in early prototypes, patched together from older Mazdas, was deemed unsuitable, so there was no choice but to build one from scratch. 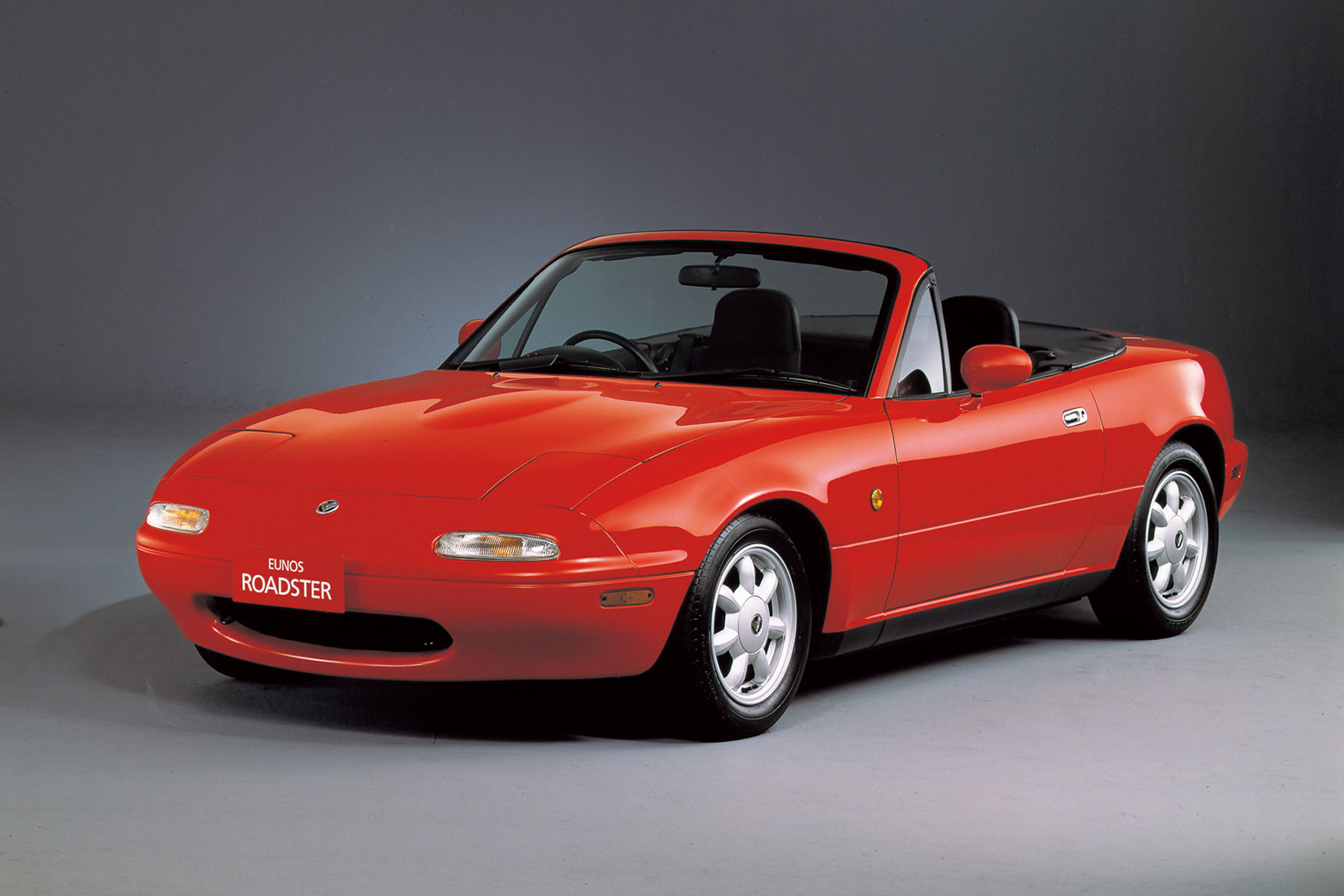 Another obstacle faced by the small development team was tight safety regulations. They were partly responsible for killing the cars that inspired the MX-5. Could a small, lightweight sports car be safe? Fortunately, computer analysis technology, still fairly new in the world of car design, was used and a simplistic, but attractive, lightweight design that met regulations was created. A full-scale prototype was created, and first shown to select members of the public in 1987. 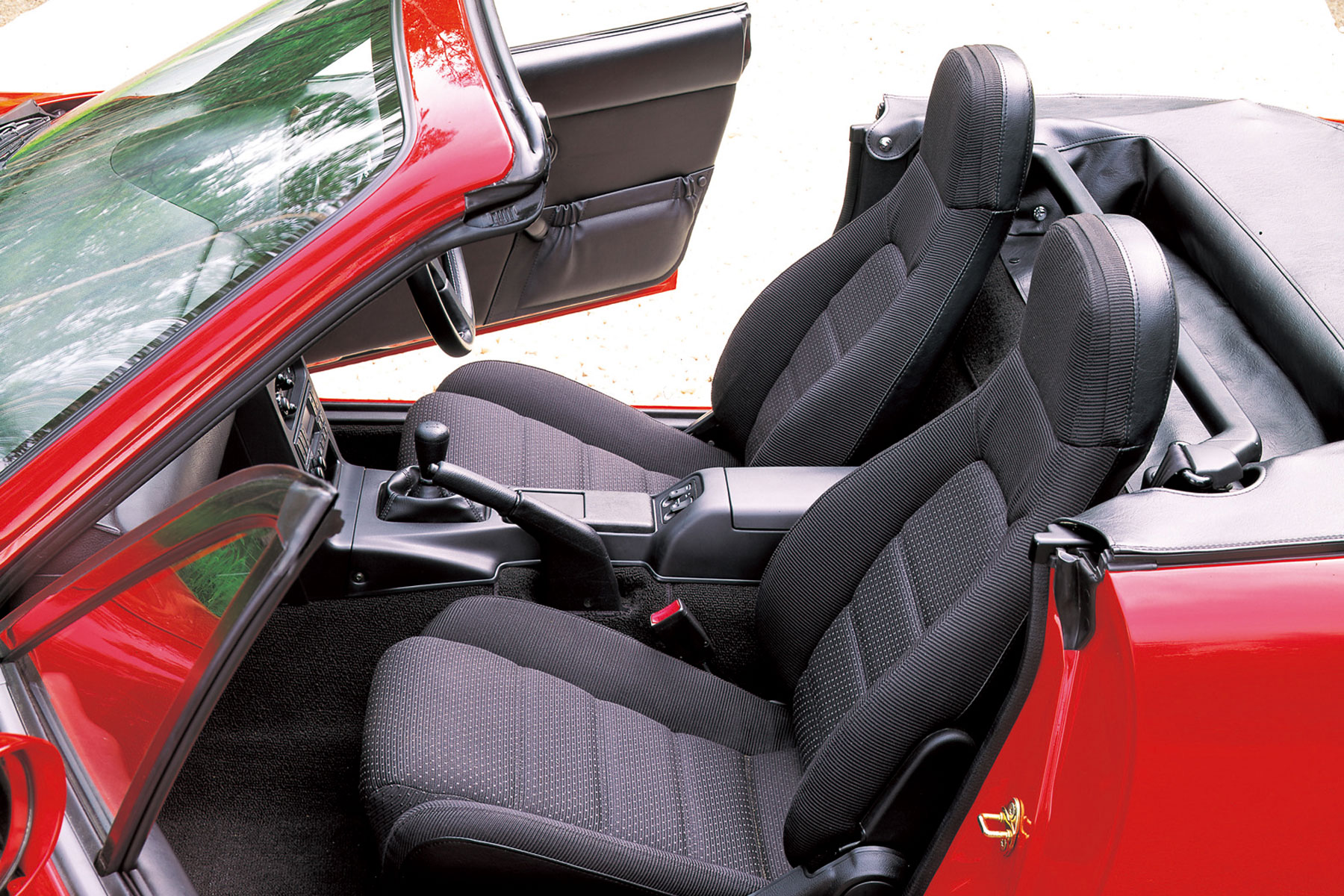 More prototypes followed, and the reaction from the lucky journalists who were able to drive it was overwhelmingly positive. By 1989, Mazda had settled on the MX-5 name (it stands for ‘Mazda Experiment’, project number 5), and the roadster was revealed at the 1989 Chicago Motor Show. 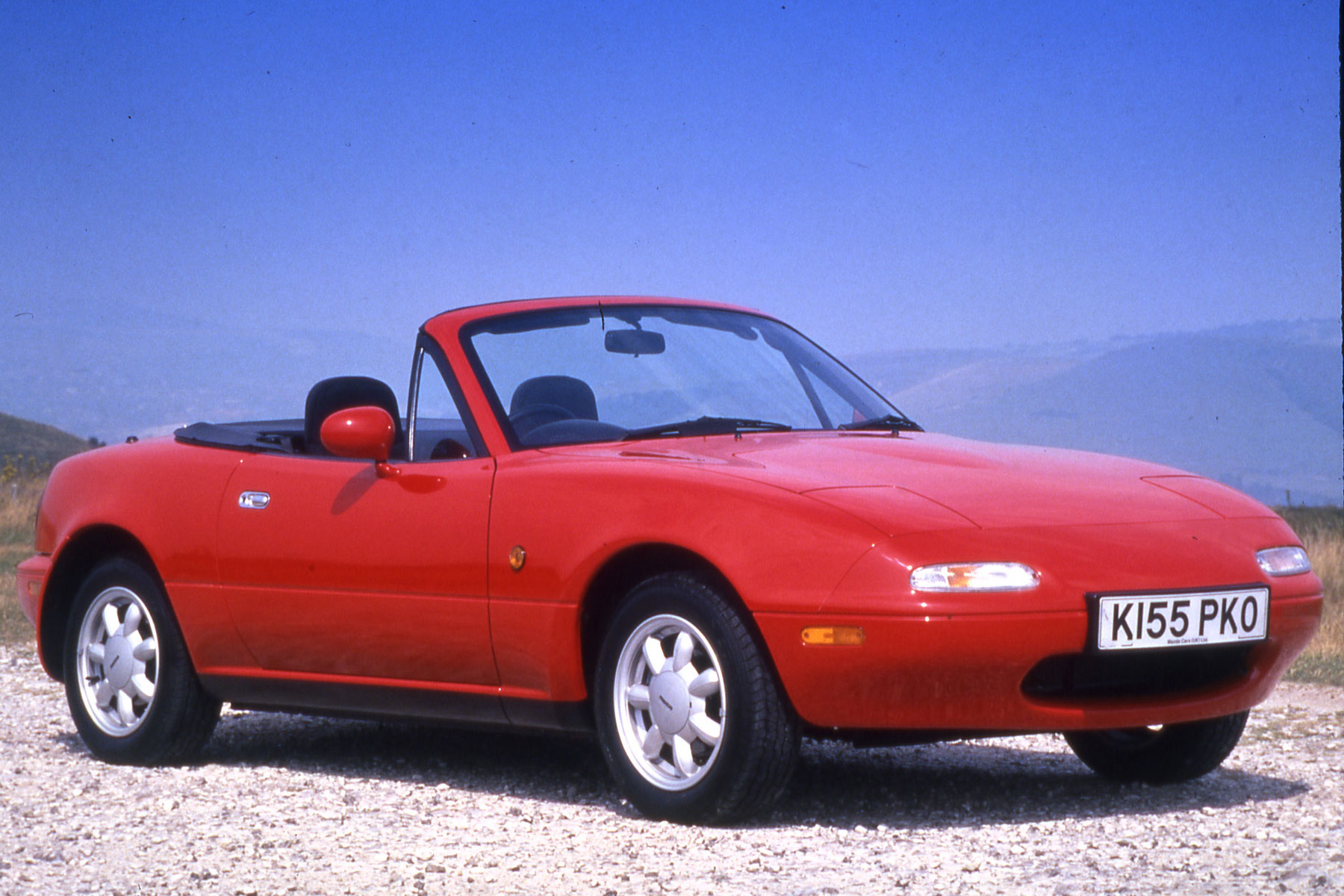 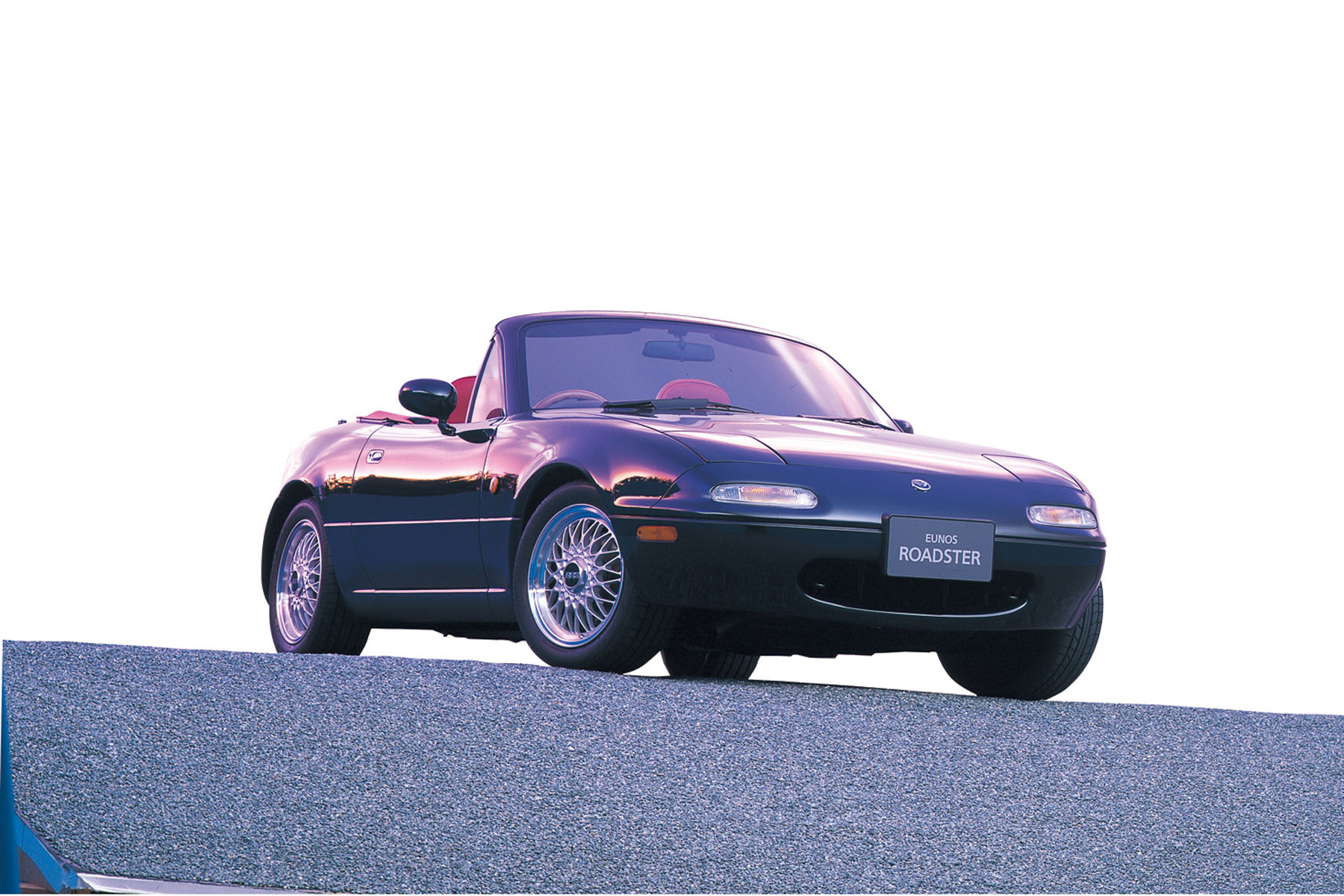 The first-generation Mazda MX-5 was an enormous sales success, with the manufacturer struggling to keep up with demand. The company initially forecast total annual worldwide sales of 40,000 units, but buyers in Japan were placing thousands of orders a month. Sold as the Miata in North America, importers were buying them and selling them in Europe for huge profits, before the MX-5 was officially launched here. In 1990, when it did officially go on sale in Germany, Mazda’s annual allotment of 2,000 cars sold out within days. During the Mk1 MX-5’s eight-year lifespan, an incredible 431,544 were made. 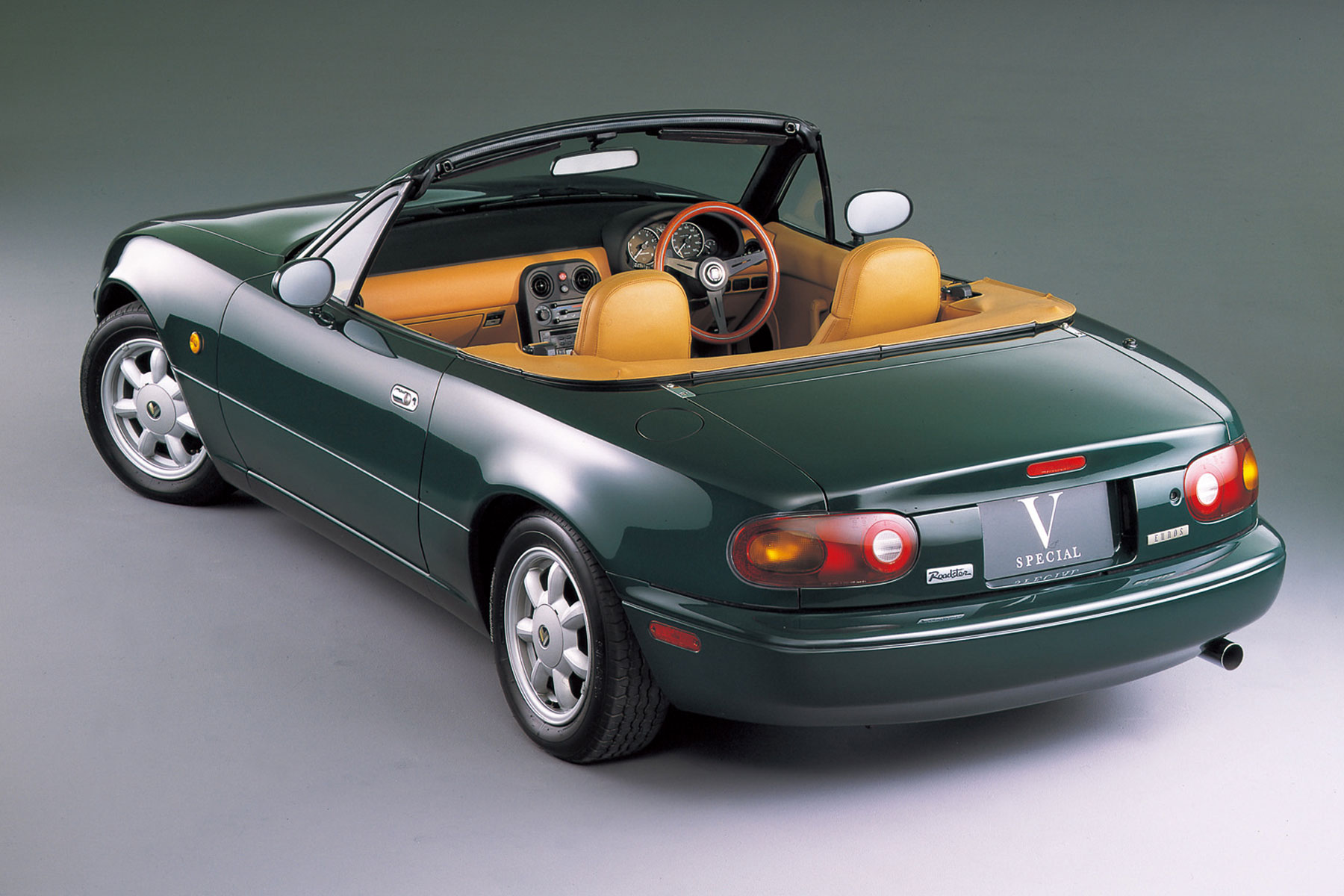 Mazda needn’t have resorted to special editions to shift the MX-5, but it did anyway. The popular V Special embraced the proper British sports car look, mixing green paintwork with a tan leather interior and a wooden Nardi steering wheel and gear knob. More limited special editions include the 1991 J Limited (production: 800), finished in Sunburst Yellow, and the 1994 RS Limited (production: 500). 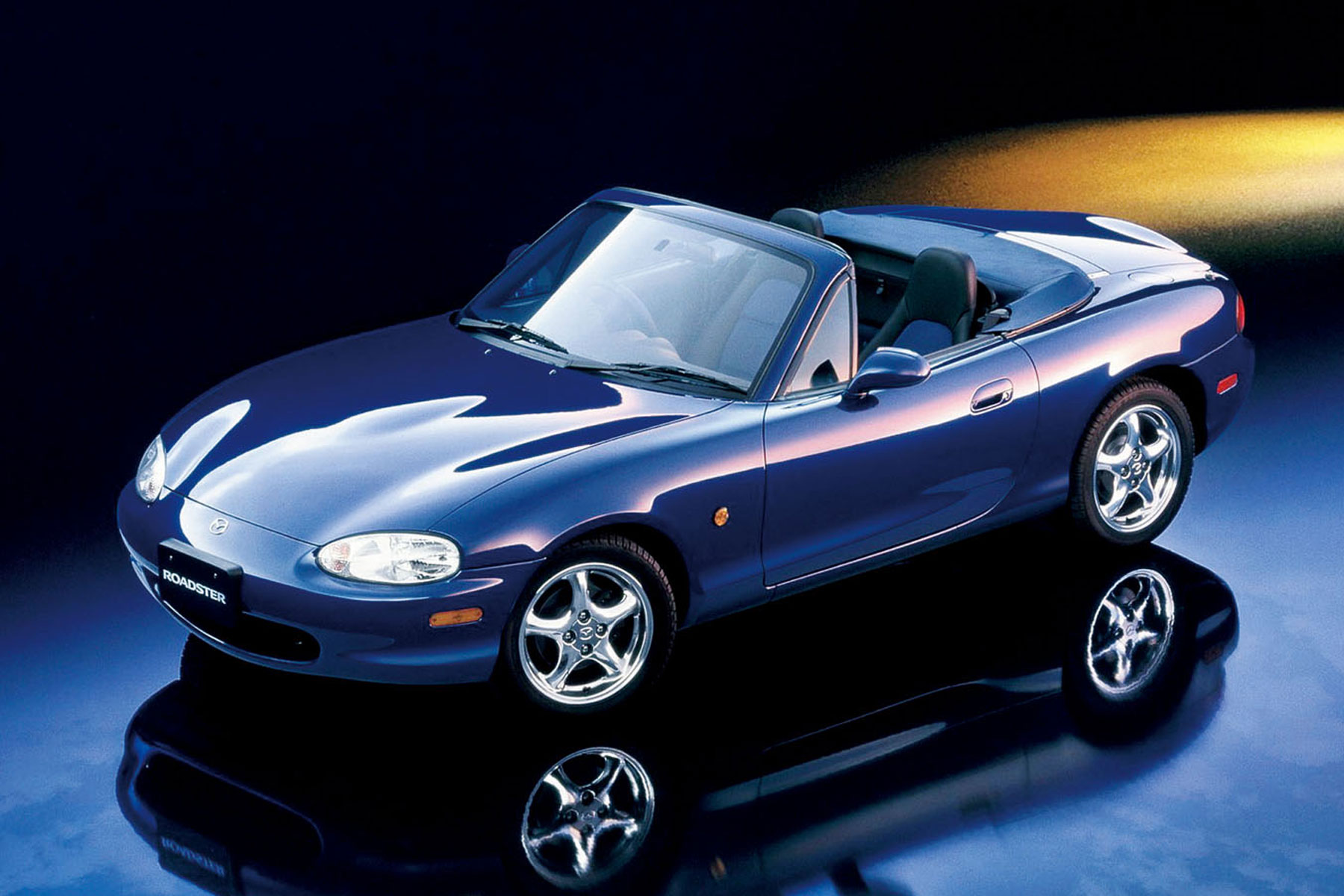 When Mazda launched the second-generation MX-5 in 1998, it had to tread very carefully. When it was revealed at the 1997 Tokyo Motor Show, it was unmistakably an MX-5. Slightly bulkier than its predecessor, perhaps, but the weight was kept down using lightweight materials (the roof, for example, was 1.3kg lighter than before, despite having a glass rear screen). 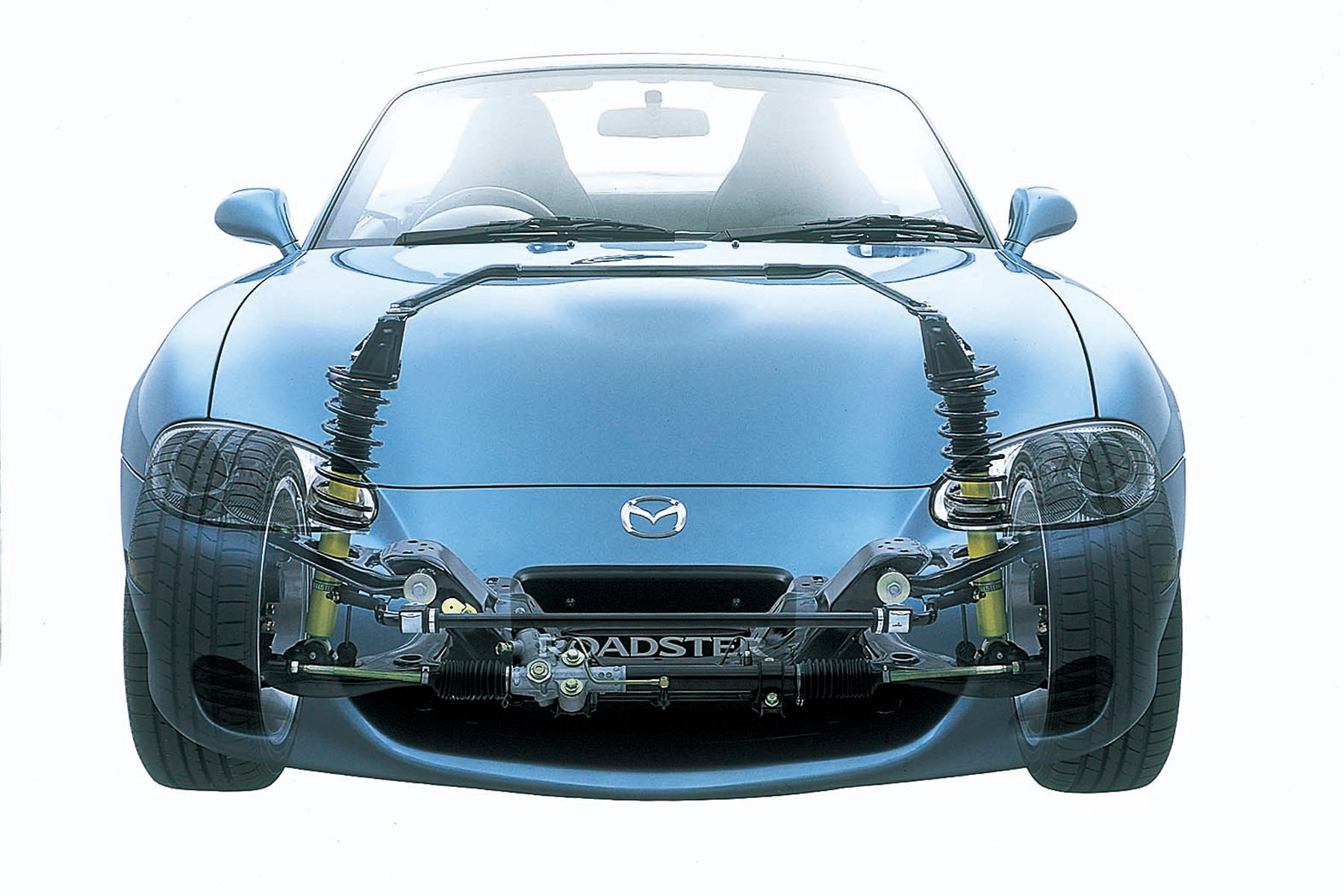 Unfortunately, the first-generation’s iconic pop-up headlights no longer passed pedestrian safety regulations, so they were replaced by fixed units. This, however, did save another 5.6kg. 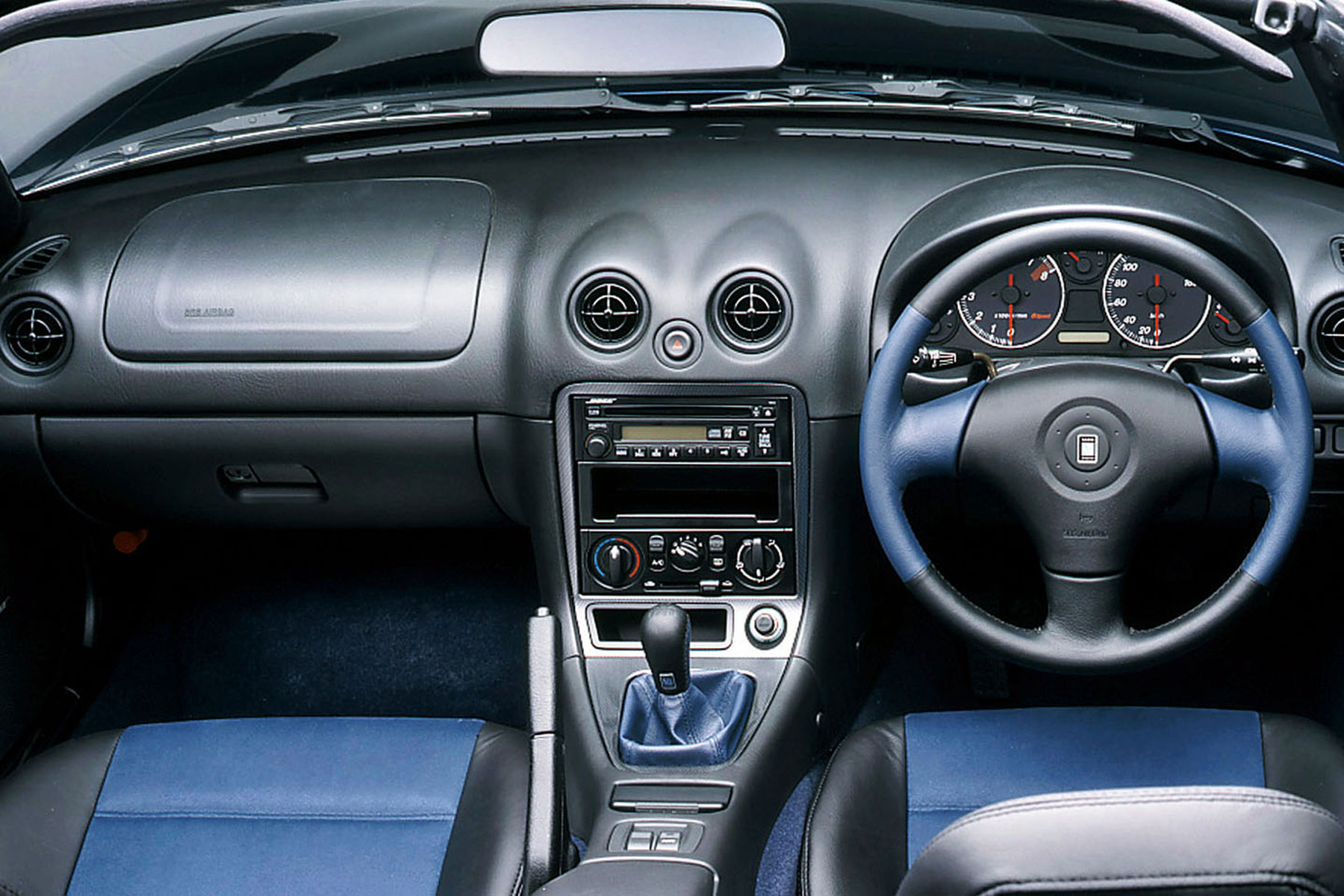 When journalists drove the new MX-5 for the first time, they discovered that the ‘Jinba Ittai’ driver-and-car-as-one spirit remained. It retained its front-engined, rear-wheel-drive layout, and was still definitely a sports car. Handling was more responsive, with just 2.6 turns of the wheel to reach from lock to lock, while power was hiked over the first-generation model. The 1.8-litre engine produced 140hp, meaning a 0-62mph time of 8.5 seconds. 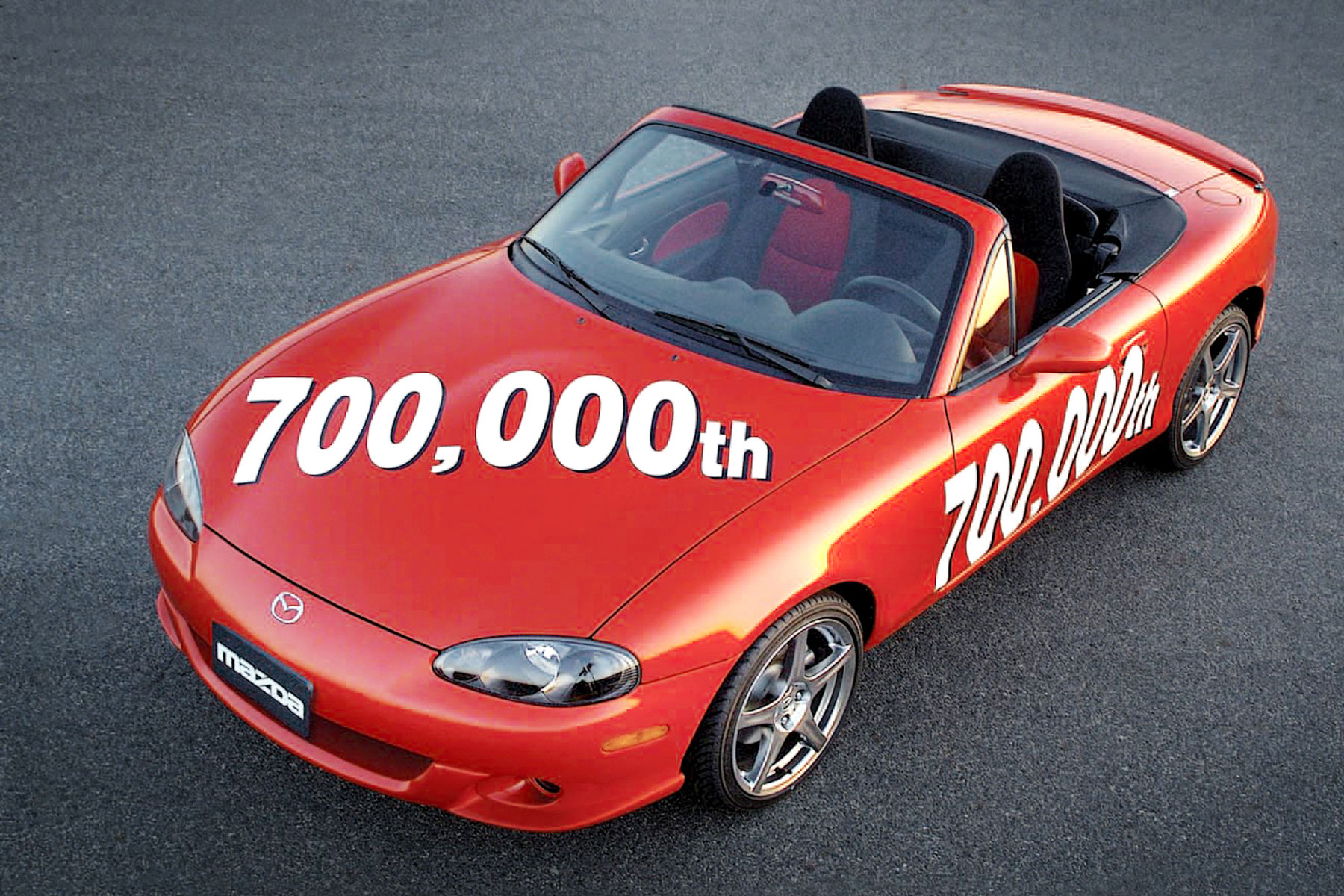 In May 2000, after nearly 532,000 first- and second-generation MX-5s had been produced, the Guinness World Records certified it as the best-selling two-seater sports car in history. Four years later, Mazda celebrated production of the 700,000th MX-5. 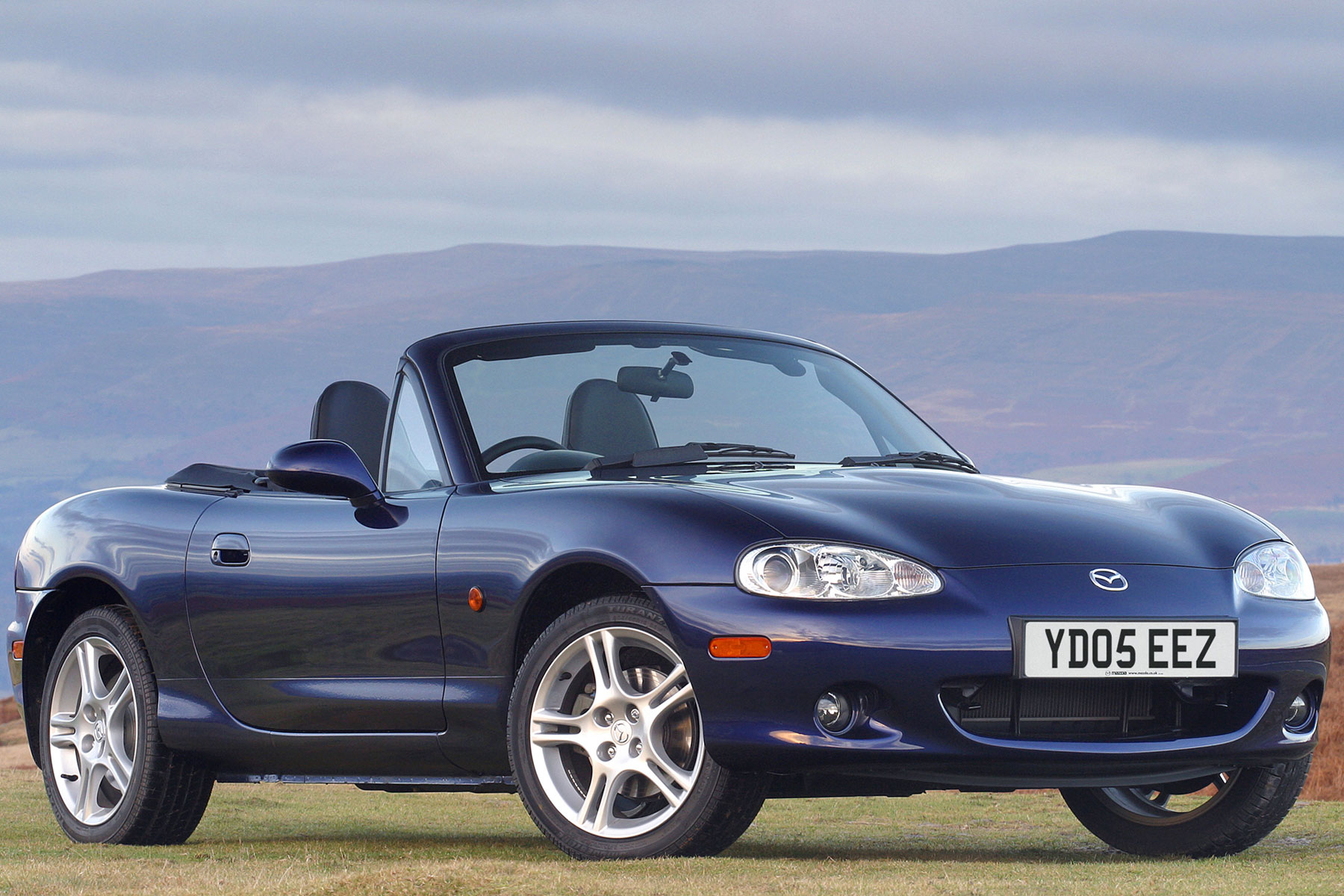 In 2001, the second-generation MX-5 received a mild facelift. The lights were tweaked, while the 1.8-litre’s power was boosted to 146hp. A new, top-of-the-range Sport model was available – boasting a six-speed manual gearbox, sports suspension, Bilstein dampers and 16-inch alloys shod with high-performance tyres. 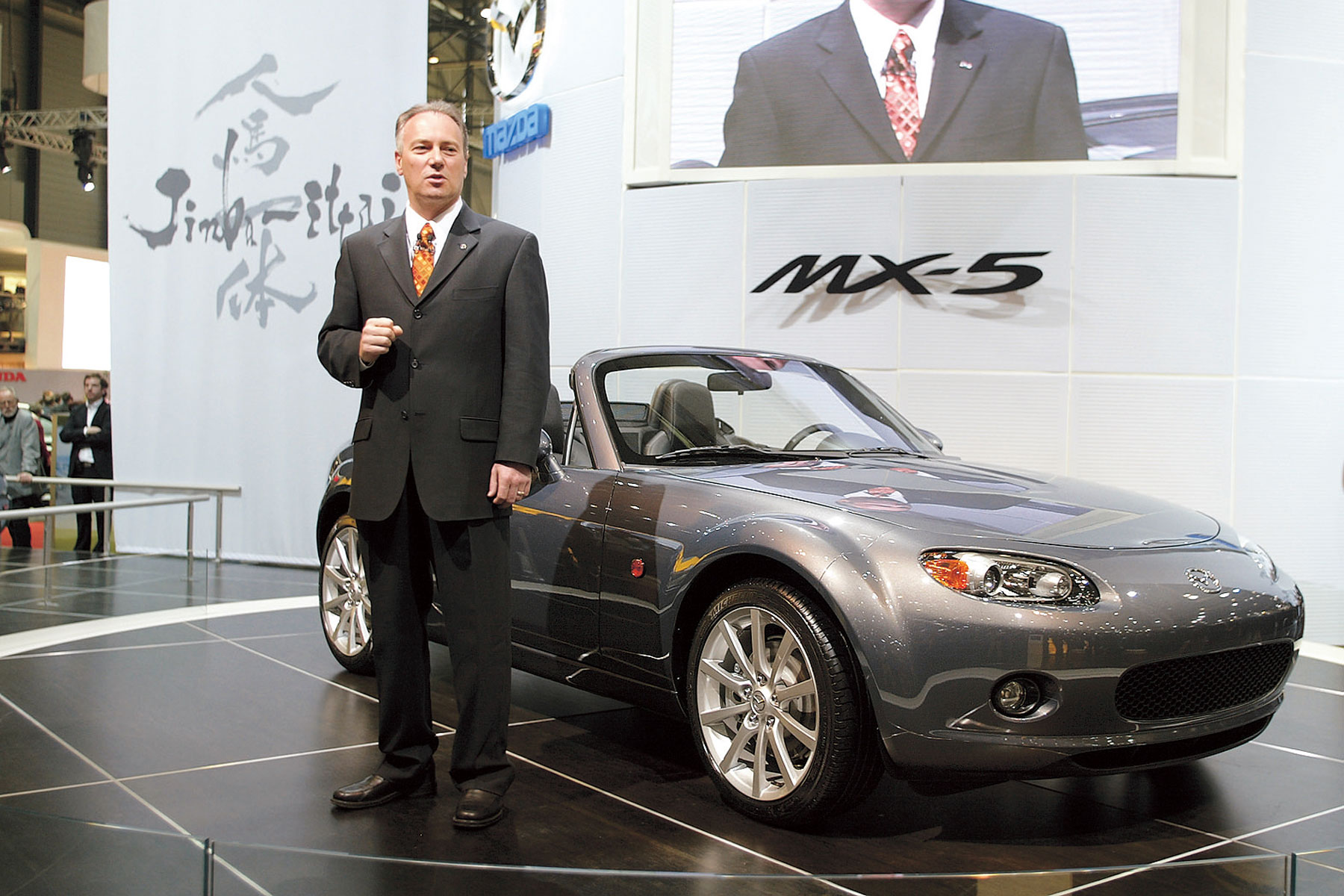 Mazda launched the third-generation MX-5 in 2005. Again, it was a challenge for the company – in a world of expensive fuel, strict safety and emissions regulations and technology that was making driving an even more isolated experience, did the humble MX-5 still have a place? 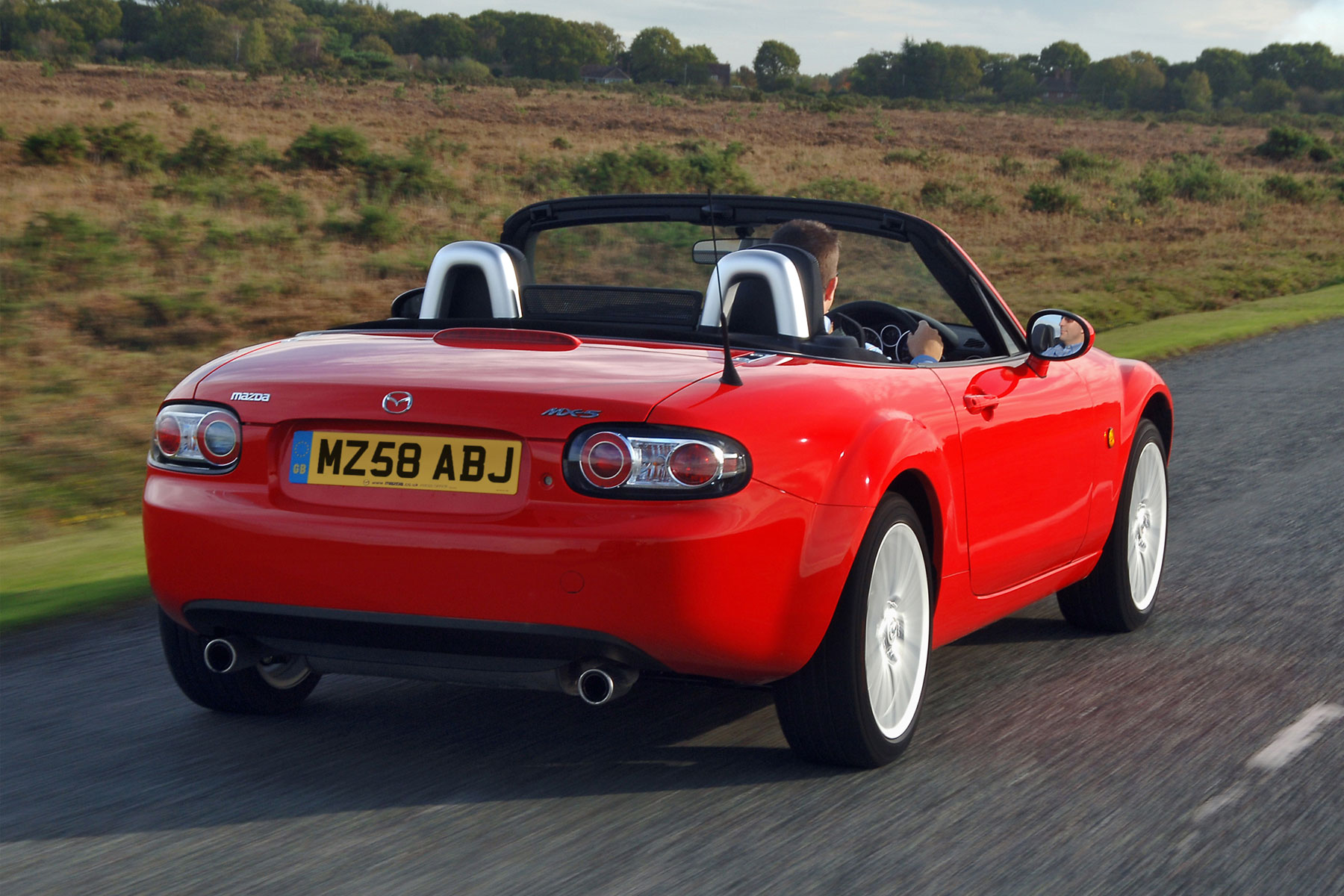 Mazda says part of the success of the MX-5 has been its constant updates and refusal to be left behind. As such, modern safety features such as stability control and side airbags were added to the sports car, while the roof could now be opened with just one hand. 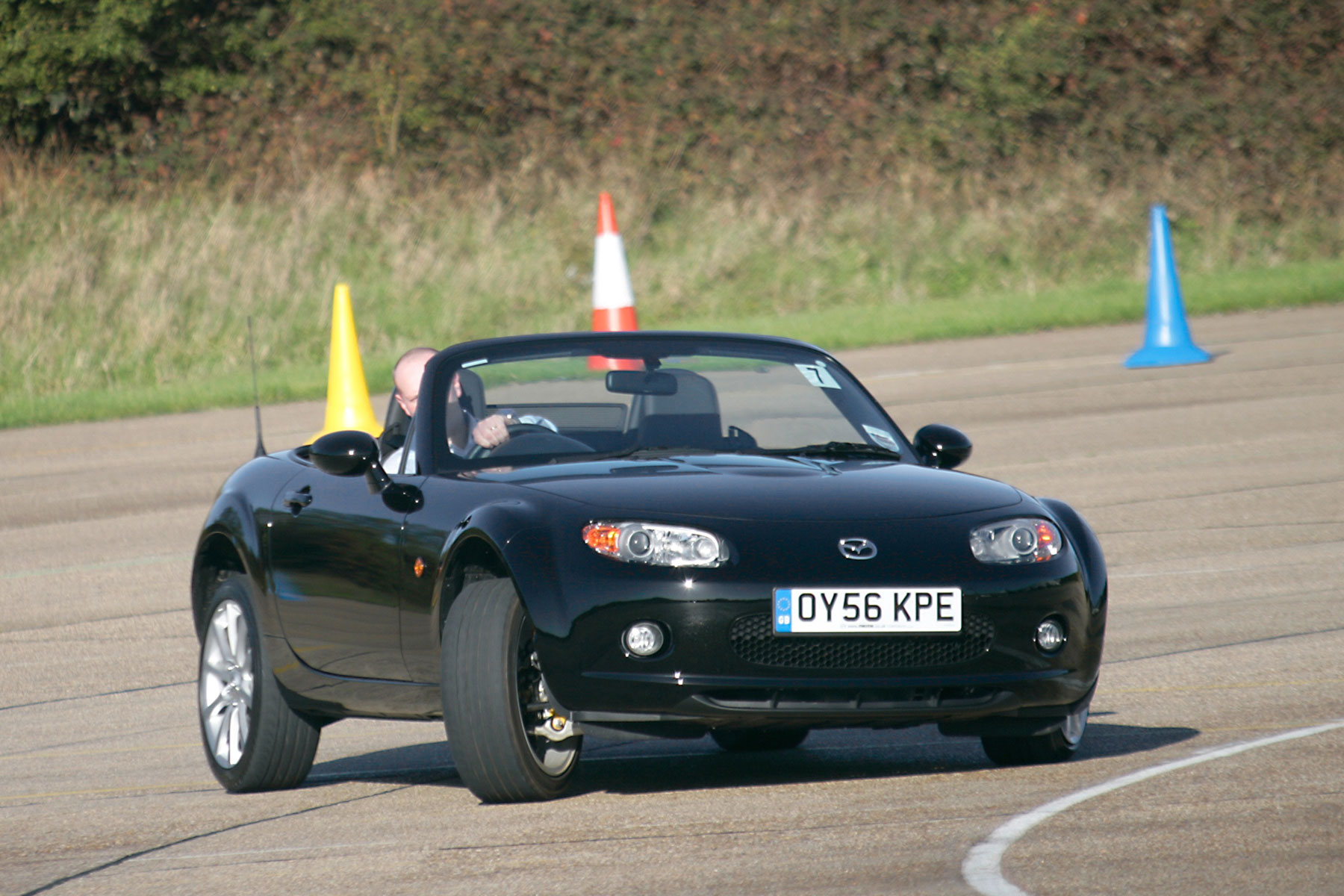 As with most new cars, the third-generation MX-5 was bigger than its predecessor – 20mm longer, with a 65mm longer wheelbase, along with a wider track and 17-inch alloy wheels. 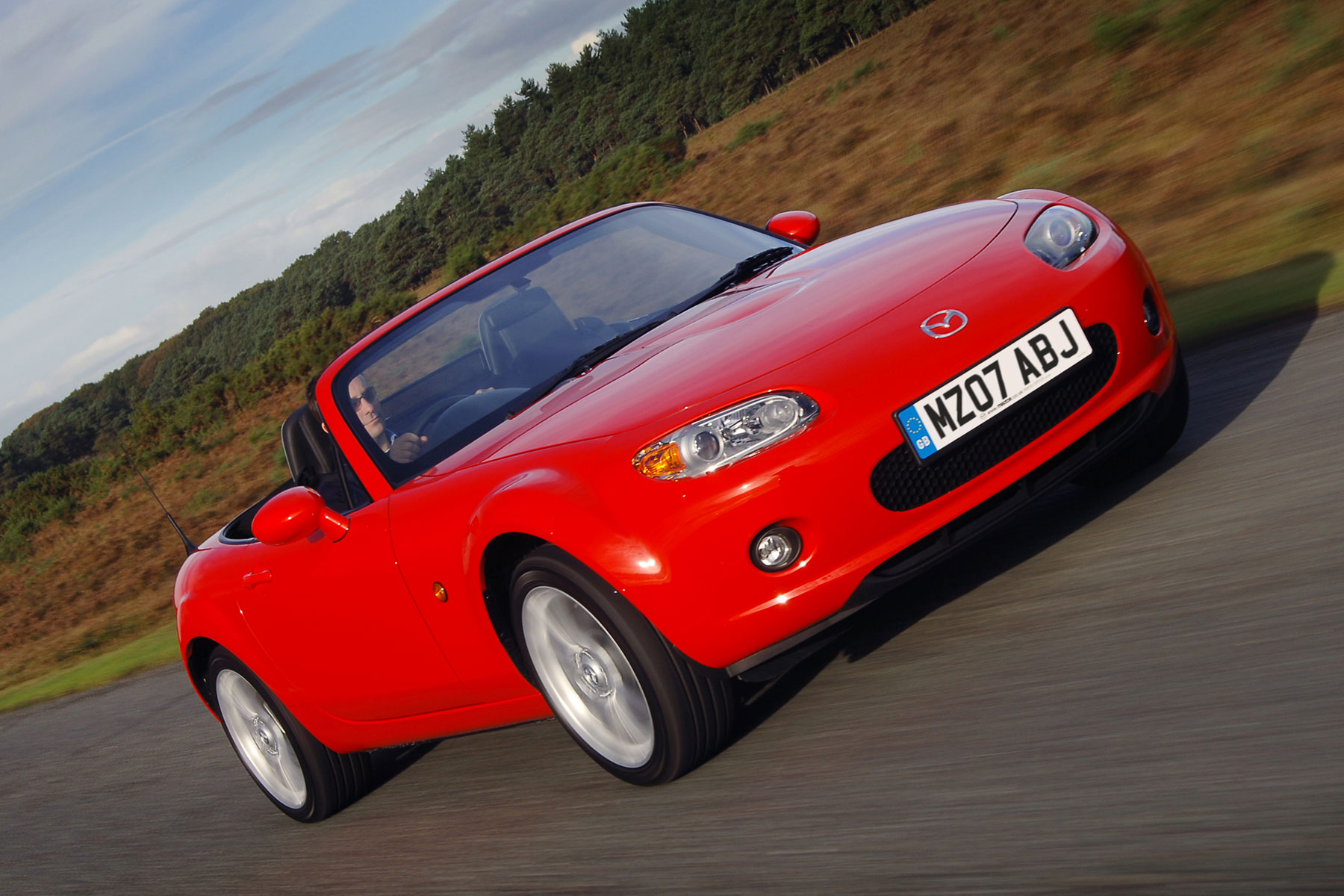 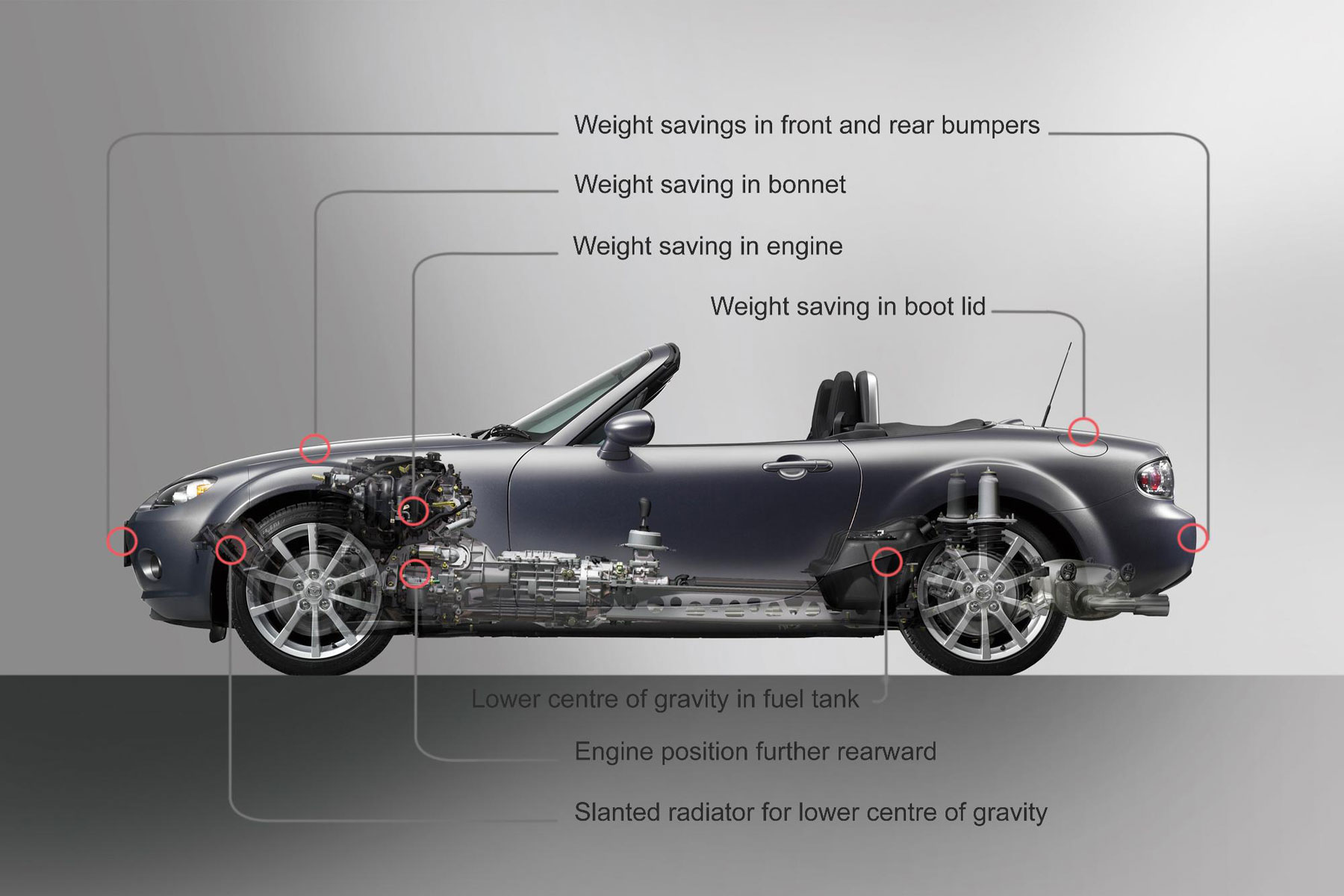 The third-generation might have been bigger than ever, but it remained lightweight. Tipping the scales at 1,080kg in total, the new MX-5 was a victory for lightweight materials. 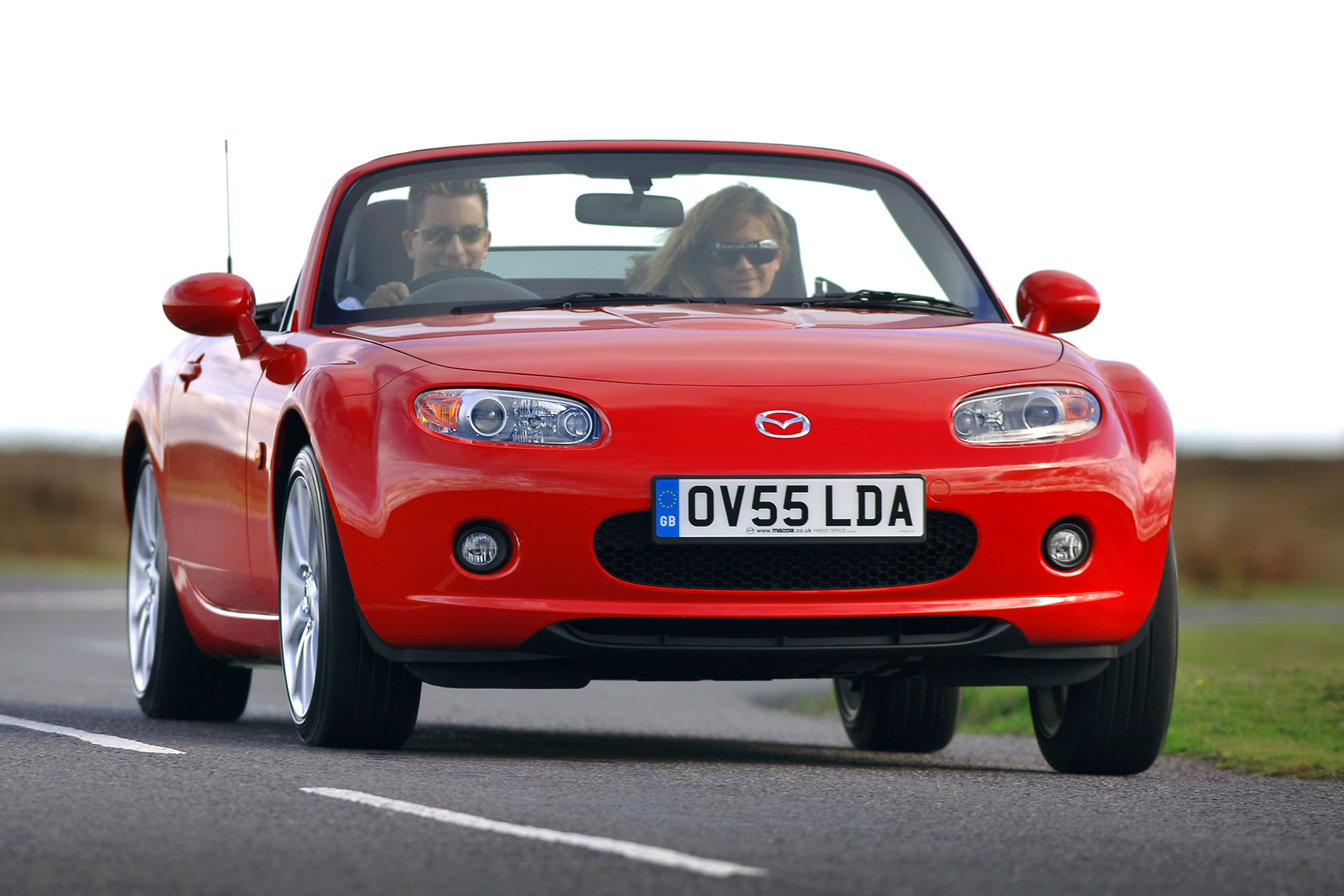 The response was great, with the third-generation MX-5 picking up no fewer than 86 awards, including Top Gear’s 2005 Roadster of the Year. 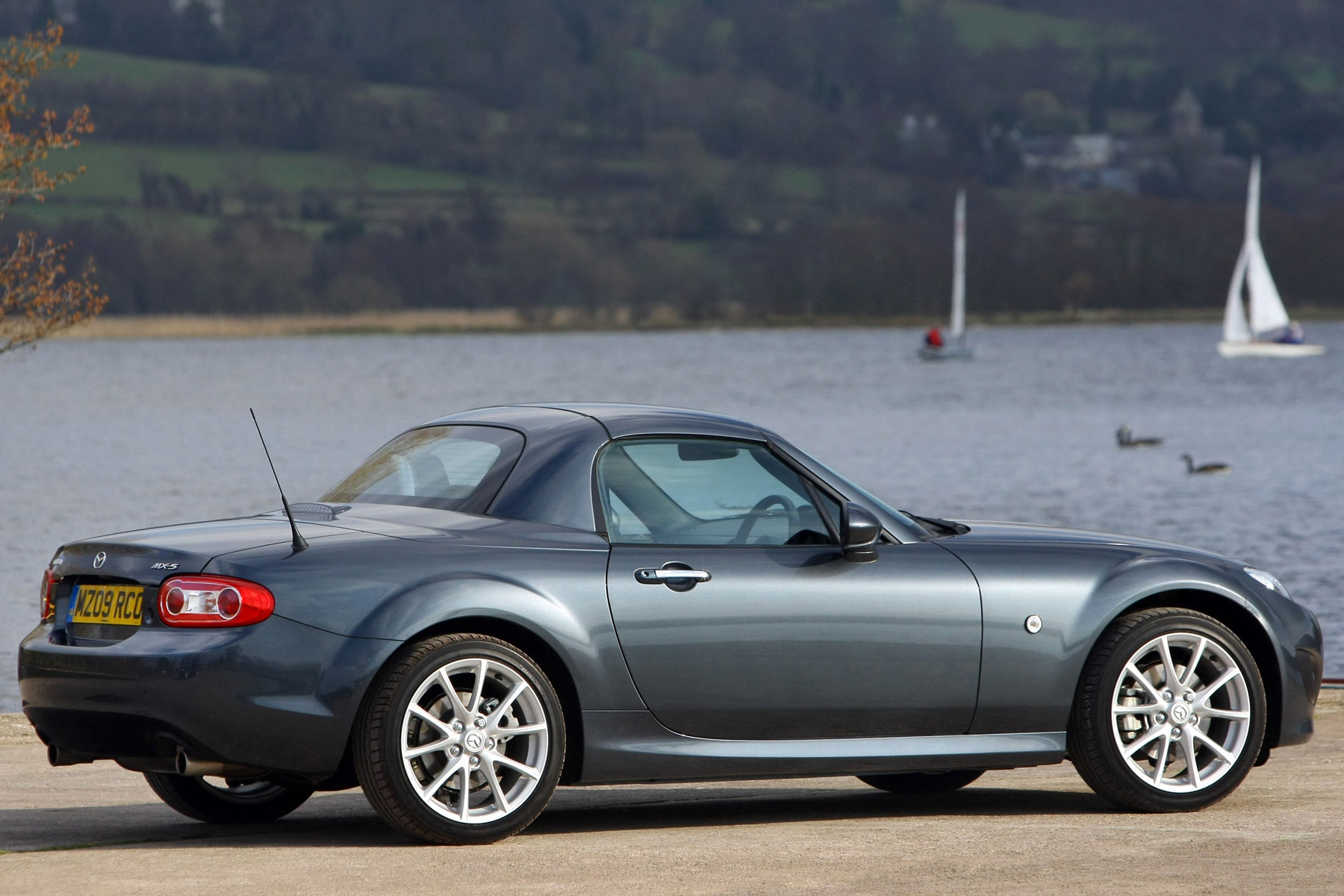 In response to demand, Mazda launched a Roadster Coupe version of the MX-5 in 2005. Its retractable hard-top could open or close in just 12 seconds – the fastest on the market. It added just 37kg to the weight of the car, while tweaks were made to the suspension to preserve its handling and retain its 50/50 weight distribution. 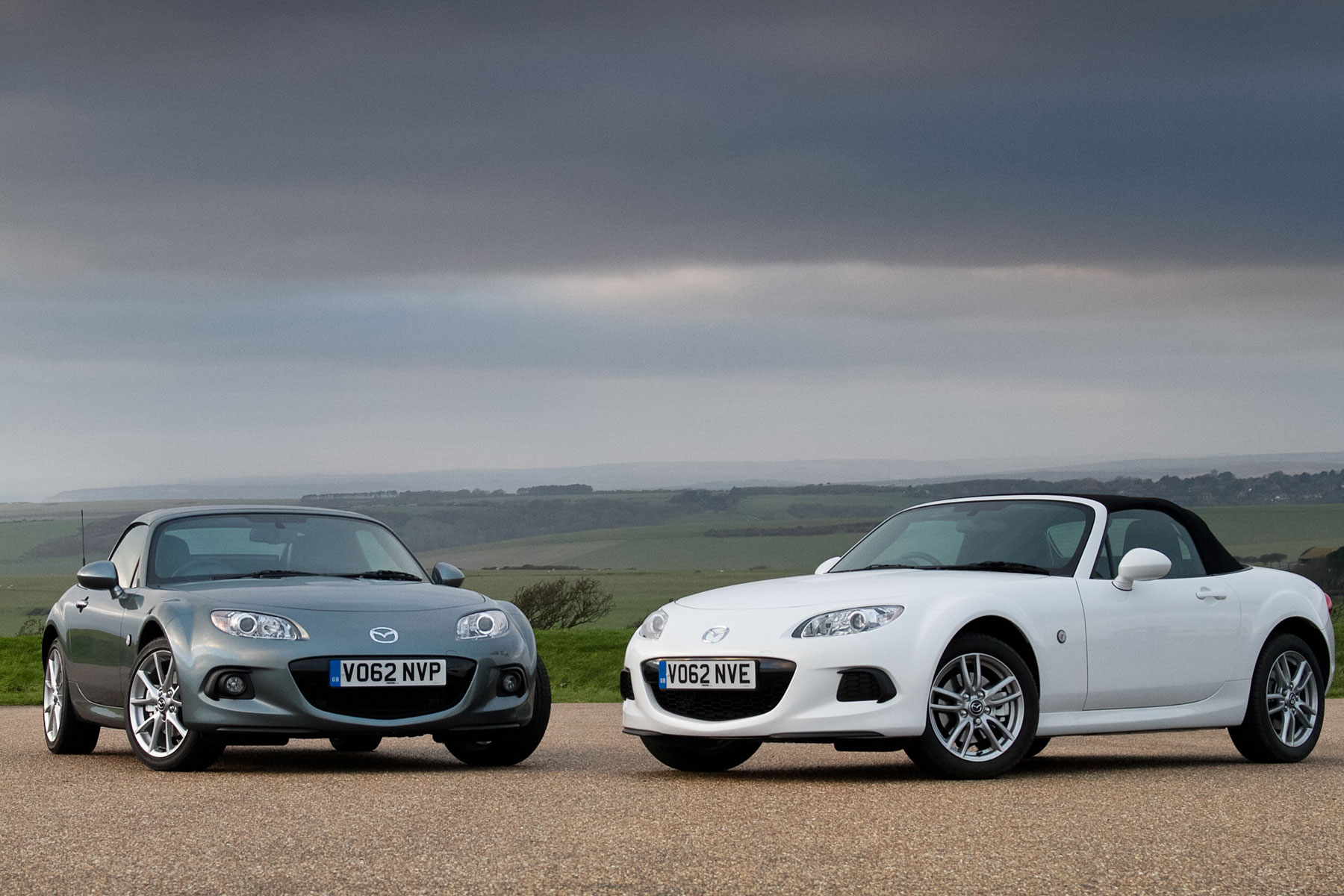 The third-generation MX-5 received two facelifts after its arrival in 2005. In 2009, the 2.0-litre engine’s redline was increased to 7,500rpm, while the six-speed manual gearbox was upgraded, and a six-speed auto added to the range. The front end was also revised, and the suspension tweaked to improve handling. 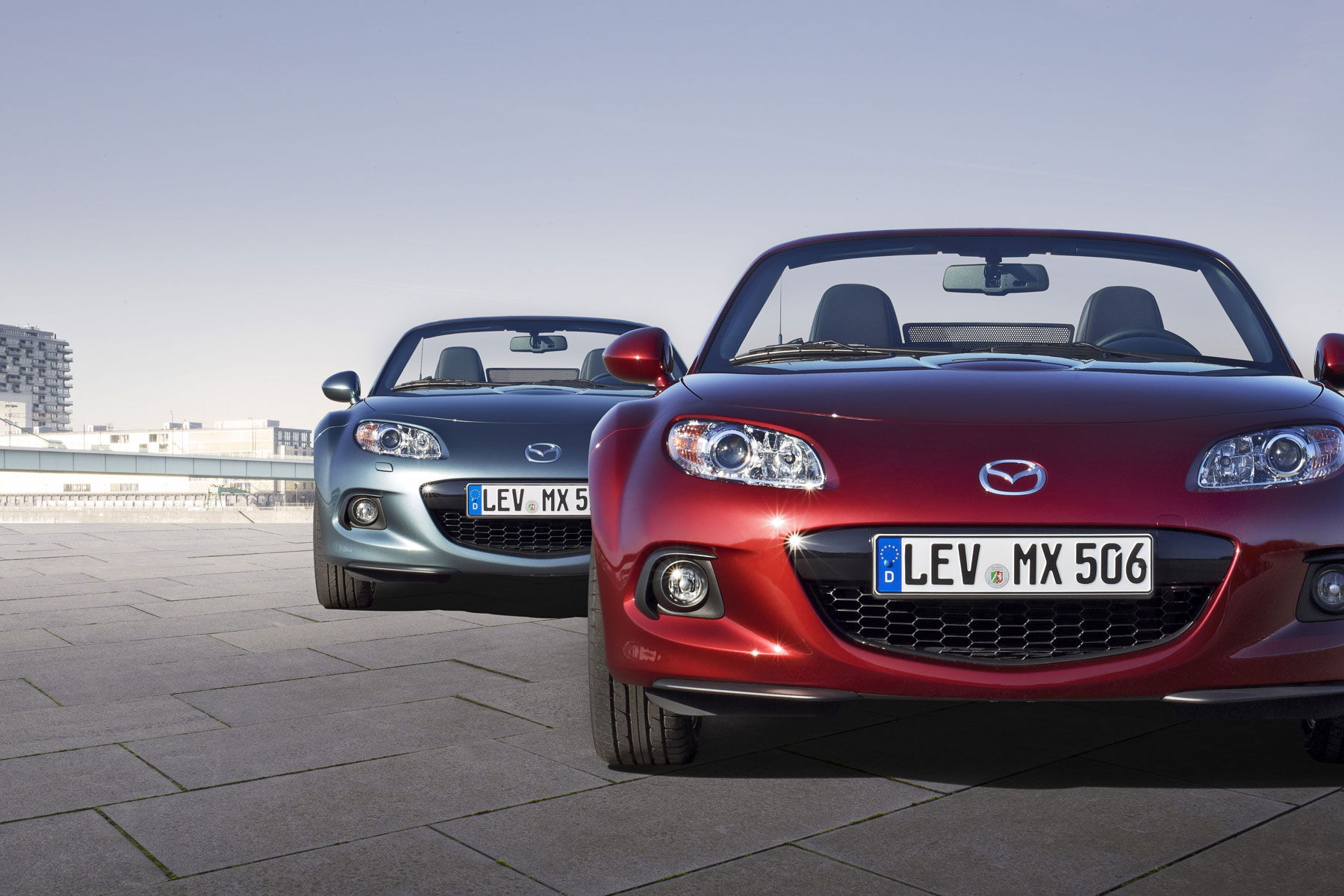 The MX-5 received minor updates in 2012, including a revised interior and a new active bonnet, which popped the bonnet during an impact, expanding the crumple zone. The front bumper was also revised to meet pedestrian safety regulations. 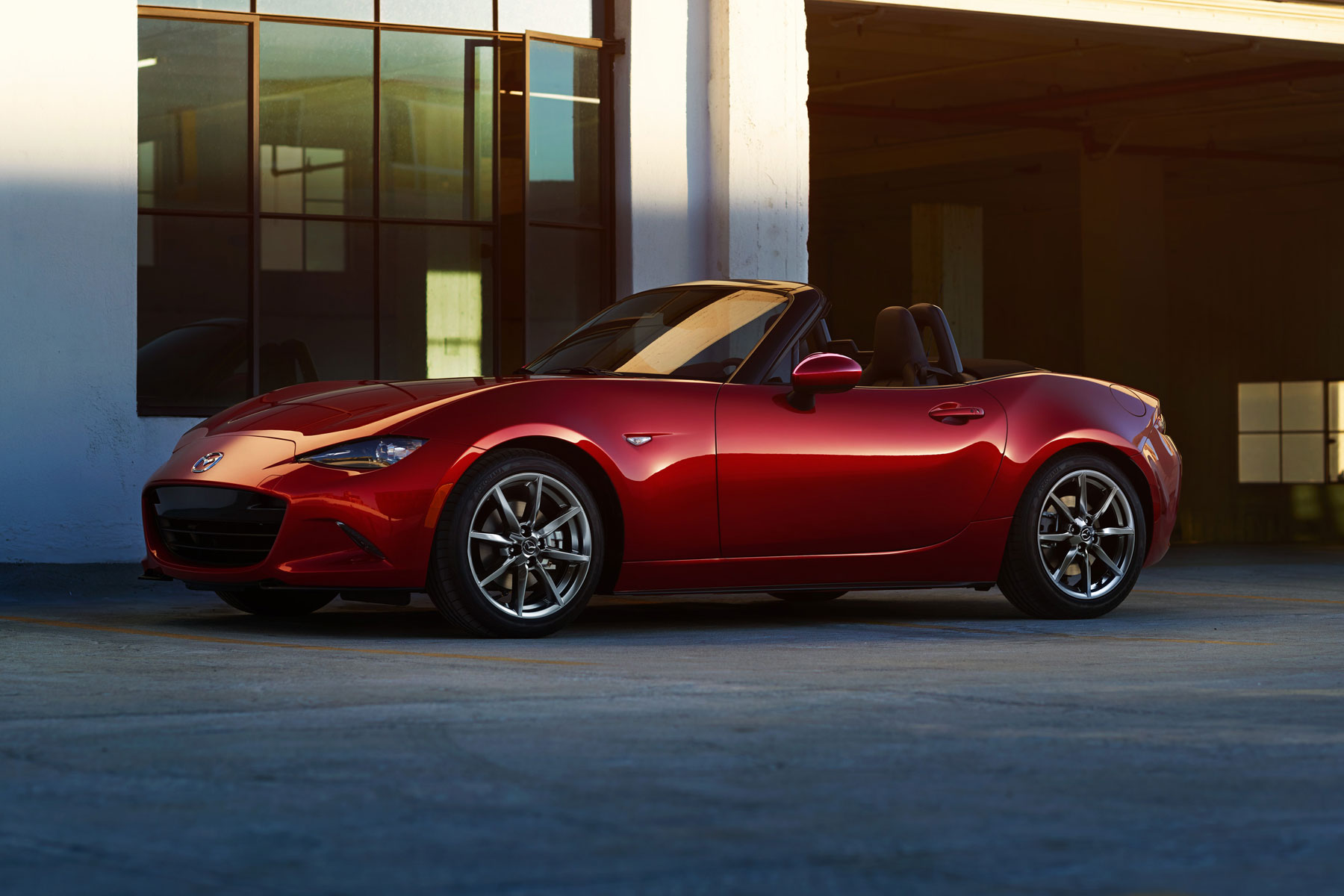 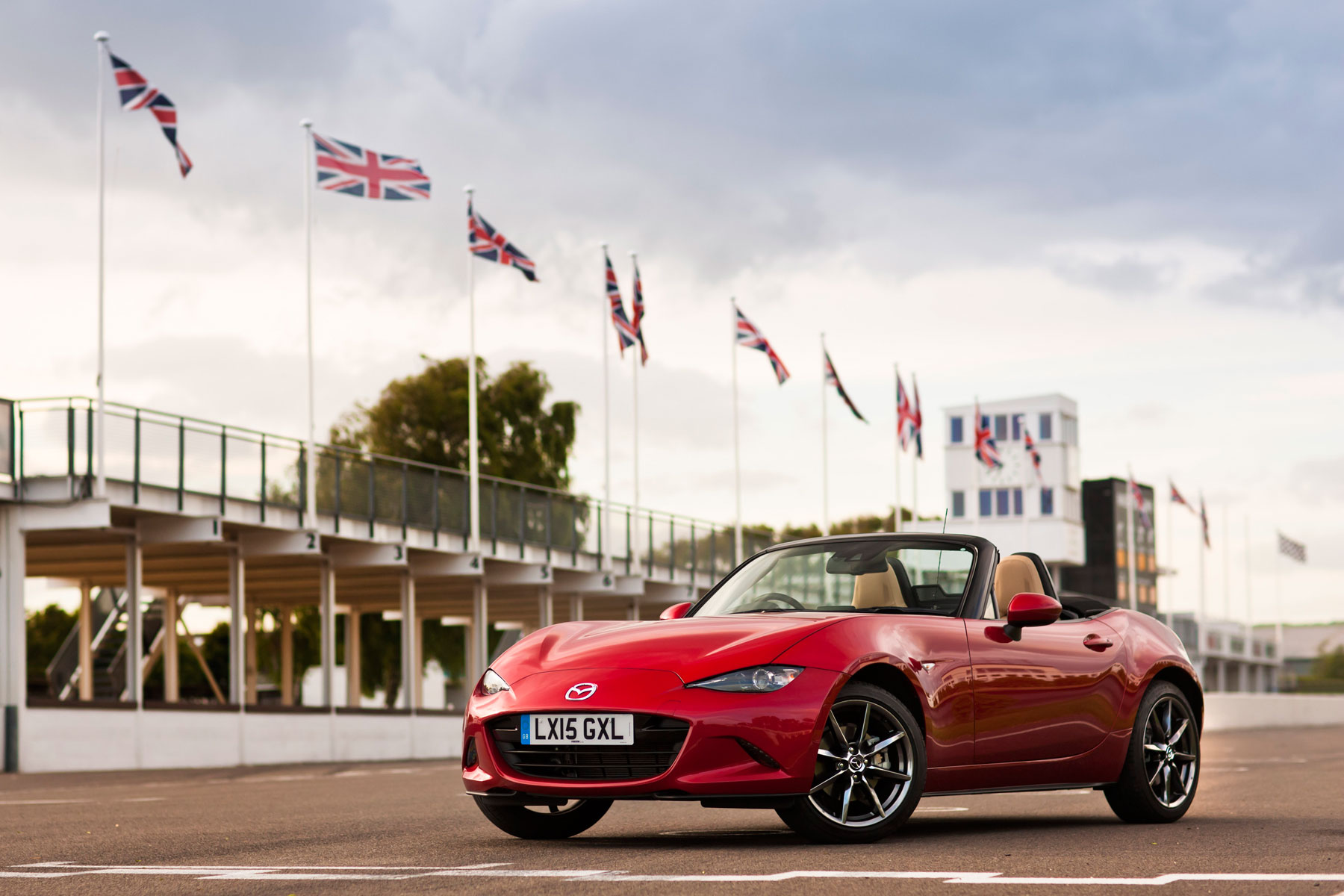 The following summer, the new MX-5 made its UK debut at the Goodwood Festival of Speed – a fitting location for the world’s favourite junior sports car. The Mk4 – known to enthusiasts as the ND – was designed around the smallest engine ever fitted to an MX-5; a 1.5-litre unit lifted from the Mazda 2. Producing 131hp, it’s actually more powerful than the old 1.8-litre unit, but a 2.0-litre version, complete with a limited-slip differential and Bilstein bumpers, is also available. 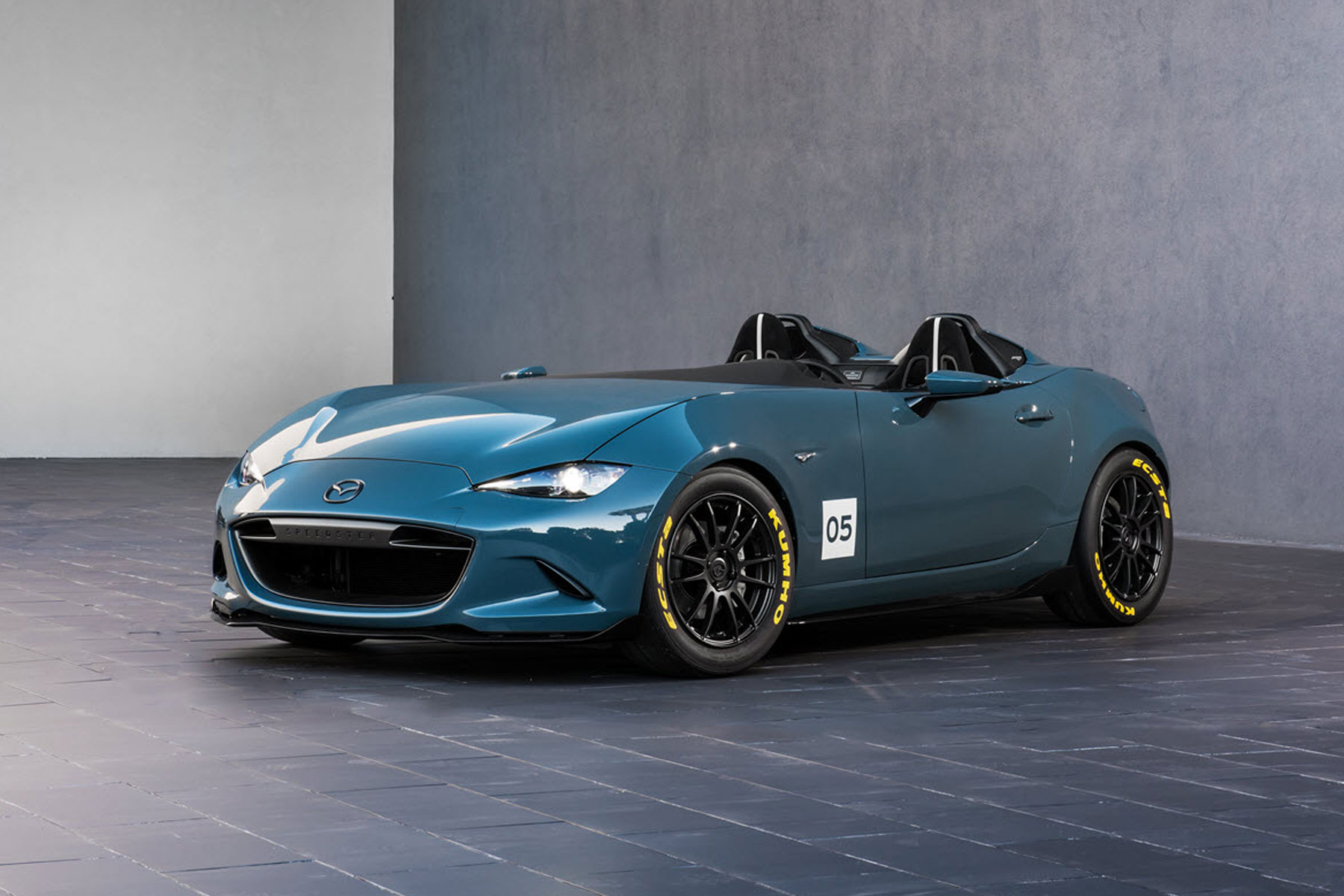 Mazda unveiled two MX-5 concepts at SEMA 2015 in Las Vegas, both of which drew inspiration from vintage classics. The Spyder featured a bikini top and a grille intake, while the Speedster showcased a super-lightweight body. The Speedster (pictured) is arguably one of the greatest MX-5-based concepts, not least because of its 16-inch Rays wheels and Blue Ether paint job. 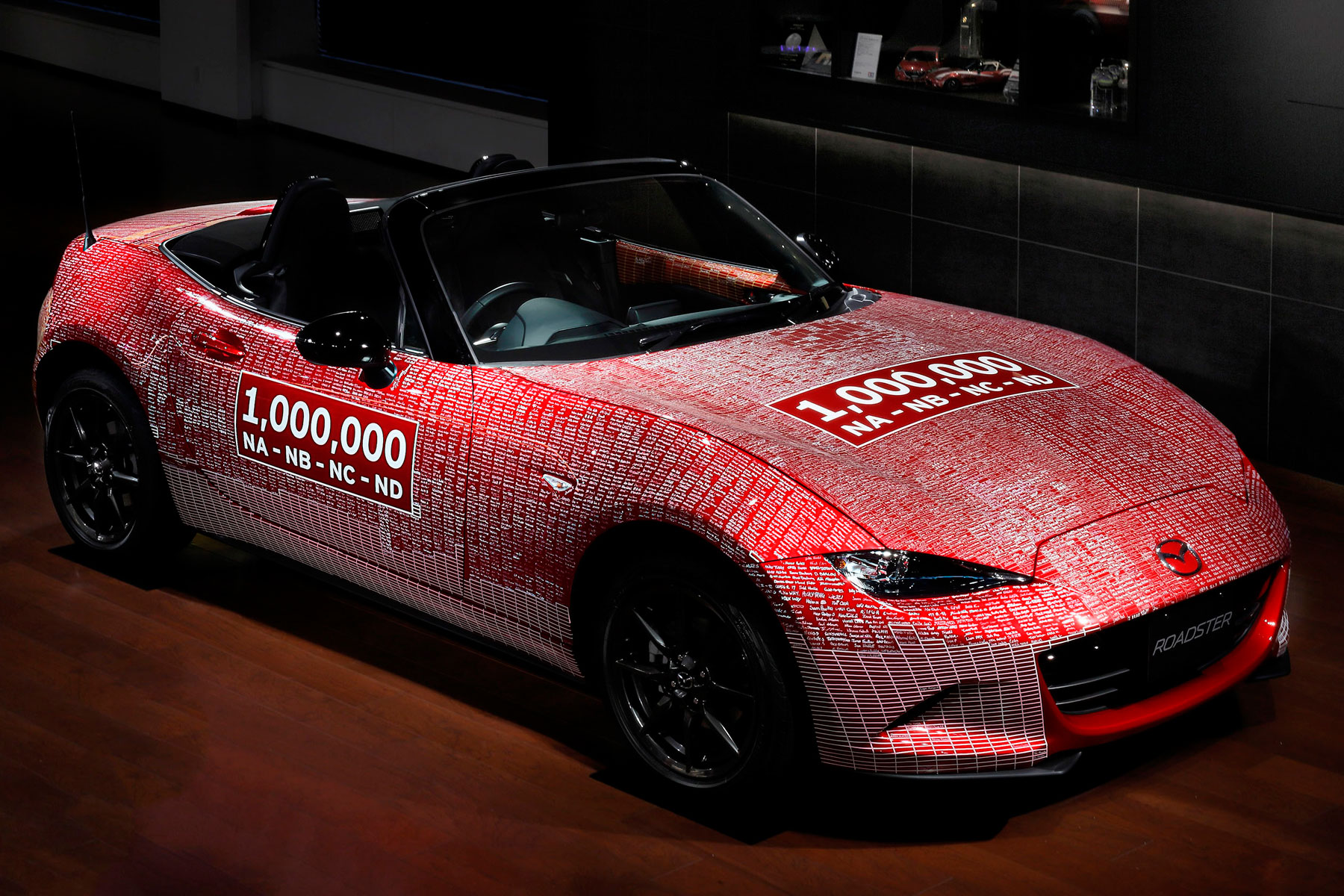 This is the one-millionth Mazda MX-5, a commemorative model celebrating the production of one million units of the two-seater sports car. It went on a world tour, appearing at 35 events in Japan, the UK, Spain, Germany, Belgium, the USA, Canada, Australia and New Zealand. By the time it had returned to Japan, more than 10,000 MX-5 fans had signed their name on the bodywork. 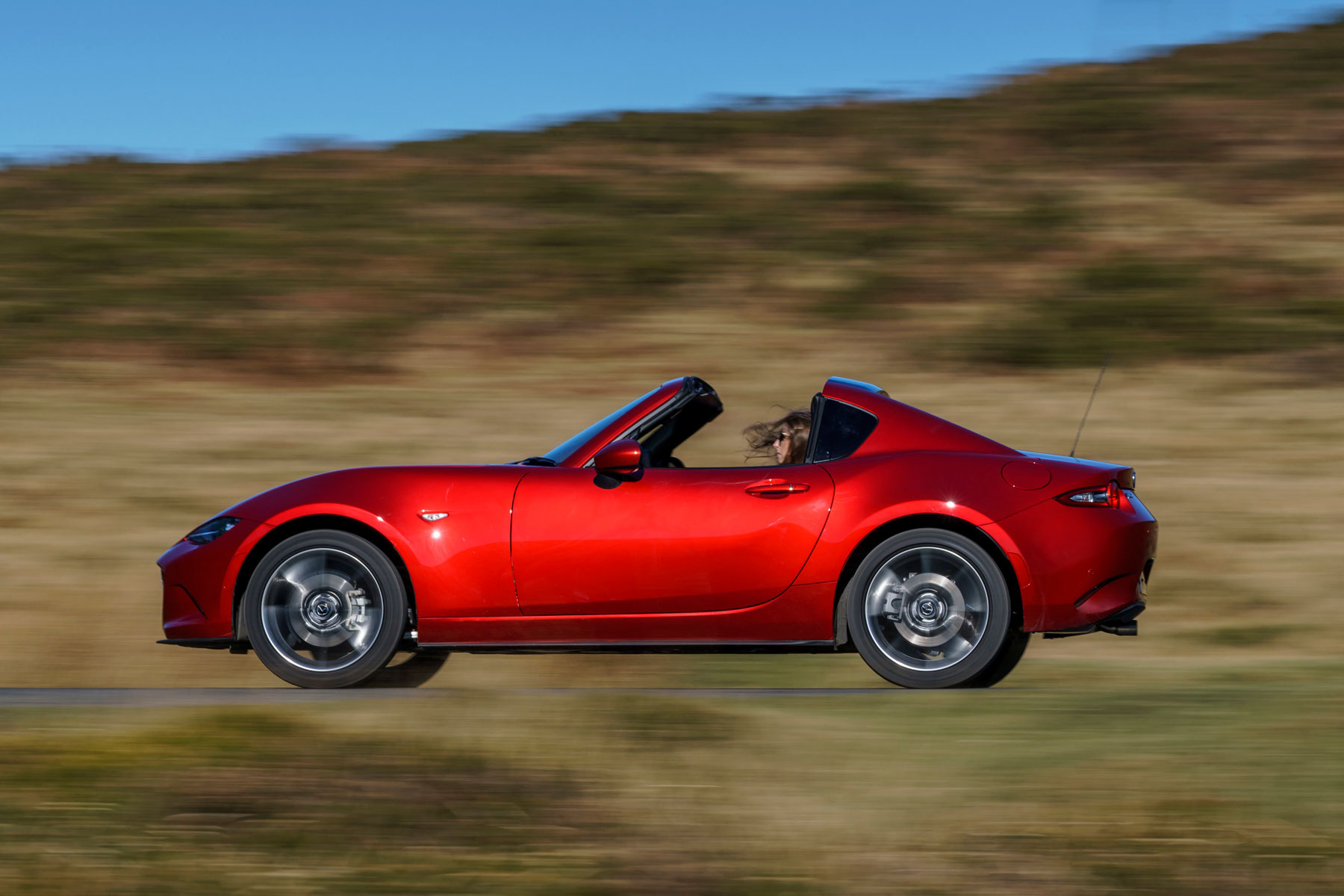 You can’t buy a coupe version of the current MX-5, but the RF is the next best thing. ‘RF’ stands for Retractable Fastback, a reference to the roof, which folds away in 13 seconds of wonderment. It adds 40kg to the weight and £2,000 to the price tag, but has no impact on the size of the boot. Clever. 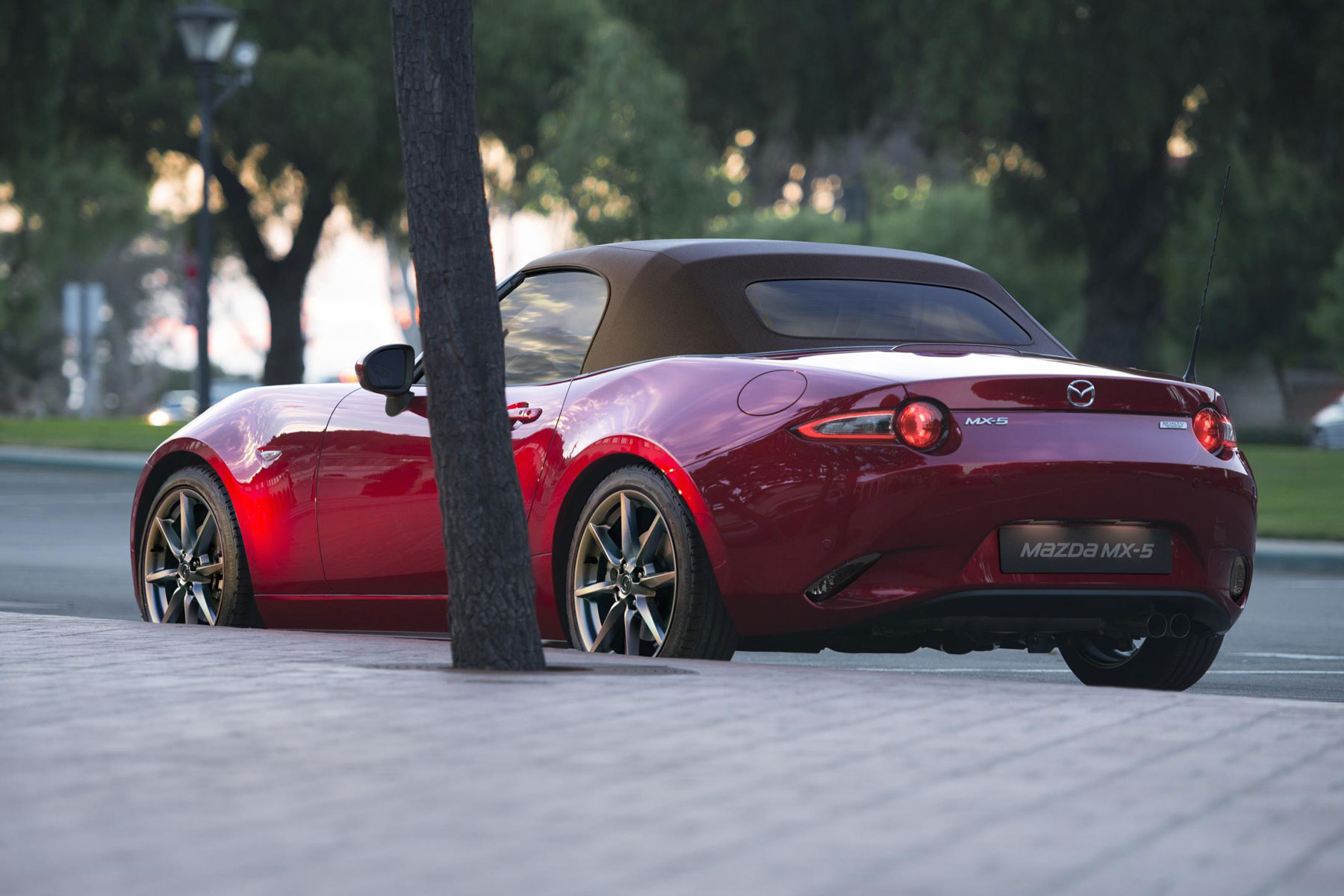 It’s hard to believe that we’re at the stage when the MX-5 needs an update, but that’s exactly what Mazda has done for the 2019 model year. The big news is the revised Skyactiv 2.0-litre engine, which enjoys a substantial power hike from 160hp to 184hp, while both the 1.5 and 2.0-litre engines have been homologated to be compliant with the new WLTP/RDE fuel economy test cycle. This should see us through to the fifth-generation MX-5. No pressure, Mazda…