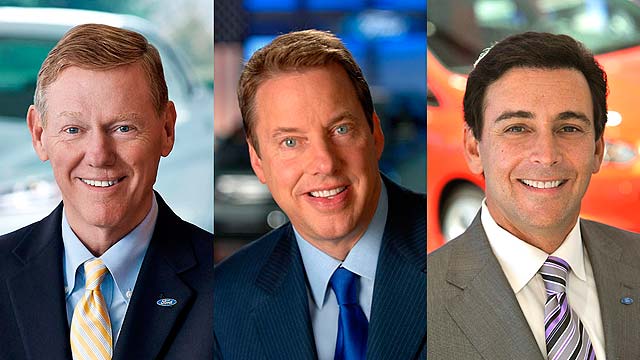 One Ford architect Alan Mulally will retire on 1 July with COO Mark Fields taking over as Ford president and CEO.

The long-anticipated announcement will see Mulally retire from Ford after nearly eight years with the blue oval – although today’s surprise announcement has come sooner than anticipated.

A Ford statement admits the decision for Mulally to retire has come six months earlier than anticipated, “following Mulally’s recommendation to accelerate the timetable based on the readiness of Ford’s leadership team”.

68 year old Mulally will be succeeded by 53 year old Fields, who has already been leading Ford’s global business operations and skill teams including product development, manufacturing, purchasing, marketing, sales and service. CEO in all but title, then.

Before his arrival, Ford was in dire need of transformation. Mulally pushed through the necessary changes, which included selling Jaguar Land Rover and Aston Martin, and also the formulation of the One Ford strategy.

The latter means that one core model is sold around the world, rather than expensive region-specific vehicles been developed. It’s generally been a successful one, saving Ford billions and also earning it the (admittedly debatable) title of retailing the world’s best-selling car name.

Famously, Mulally’s far-sighted (or lucky?) decision to borrow heavily before the economic crash saw the firm not need to ask for government bailouts, unlike its key US rivals GM and Chrysler. This has since won it goodwill amongst American car buyers.

“It has been an honour to serve and contribute to creating a viable, profitably growing company for the good of everyone associated with the Ford Motor Company,” Mulally said.

“By working together with all of our stakeholders around the world, we now are accelerating Henry Ford’s original vision to open the highways to all mankind.”