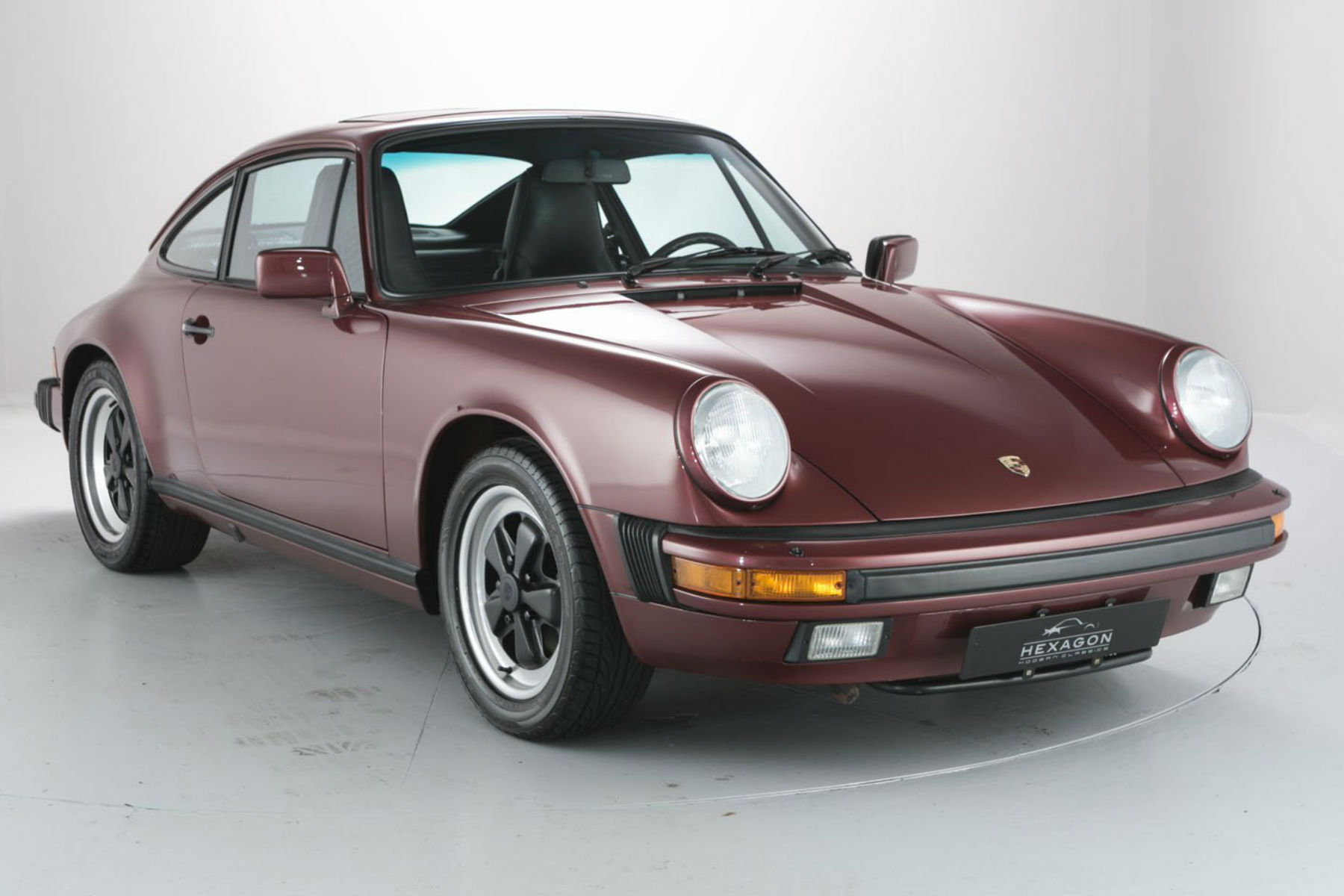 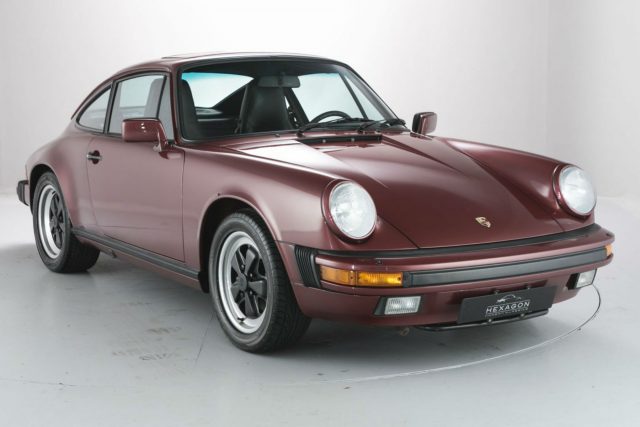 “A Porsche 911 is better than a flat in Chelsea.” So opined a classic car expert to us recently. And while nobody is suggesting you sell the house and squeeze your worldly goods into an old Porsche, the comparison between 911 values and London property prices is a valid one.

Now a 1985 Porsche 911 Carrera 3.2 with just 4,429 miles on the clock has come up for sale. It’s described by the vendor, Hexagon Modern Classics, as being in ‘timewarp’ condition. So while £84,995 certainly isn’t cheap, who’d bet against it being worth more in years to come?

Last of the original 911s 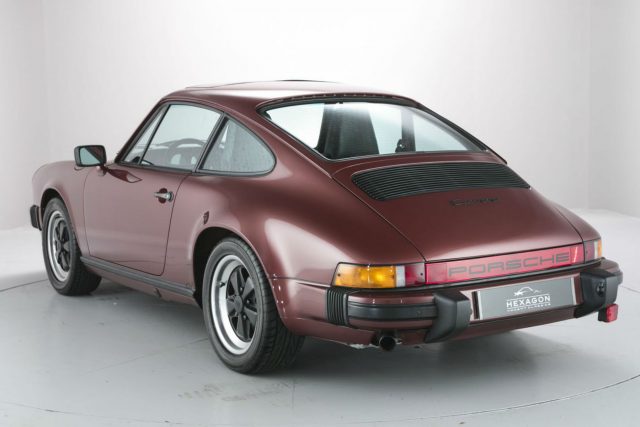 Road testers at the time praised the car’s improved refinement and driveability – the latter thanks to a big hike in torque to 209 lb ft. And, of course, it still had the classic air-cooled soundtrack. It would take until 1998 and the 996-generation 911 before Germany’s greatest sports car went water-cooled.

This particular ‘Garnet Red’ 911 is fitted with the earlier 915 five-speed manual gearbox, which is often criticised for its vague shift action. The 1987-on Getrag G50 five-speeder is a big improvement, if you can find one. 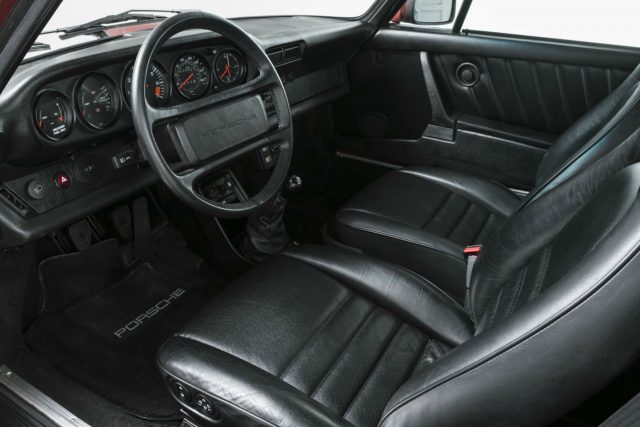 Just look at that interior – zero fripperies or superfluous styling touches, just no-fuss functionality. It was during the 1980s that German cars cemented their reputation for build quality (compare a Mercedes-Benz of the era to one built a decade later) – and the 911 is among the best of the breed.

That said, the Carrera 3.2 is hardly an ergonomic masterpiece. The large rev-counter, red-lined at 6,300 rpm, is situated dead-ahead, in traditional Porsche style. But the minor controls are scattered haphazardly across the dashboard, or awkwardly situated behind the steering wheel.

Traditional ‘tombstone’ black Porsche seats with matching door cards give the interior of this 1985 911 a sombre air. But hey, nobody said you have you live in it… 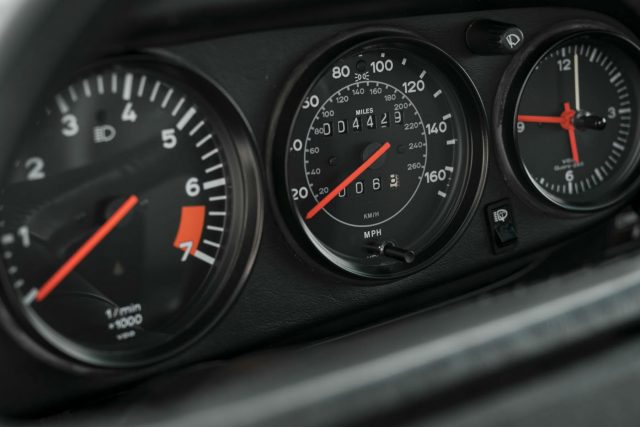 Hexagon says the interior of this Carrera 3.2 is ‘pristine’. And so it should be, with just 4,429 miles under its Fuchs alloy wheels. Over 31 years, that’s an average of just 143 miles a year. Barely enough to keep that famous flat-six ticking over.

Fortunately, the car has a full service history and comes with a 12-month warranty from Hexagon, plus a fresh MOT.

Inside, the new owner will benefit from air conditioning, electric windows, an electric sunroof, cruise control and a Blaupunkt radio/cassette with an oh-so-1980s graphic equaliser. The original handbook, jack and toolkit are all present and correct, too.

Own a piece of Porsche history 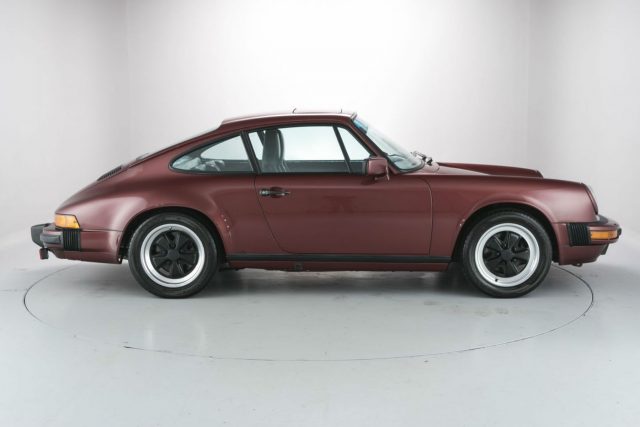 The 911 Carrera 3.2 was produced in three bodystyles: coupe, cabriolet and Targa, with the coupe being the biggest seller. So while this car will never boast the weapons-grade investment potential of a 2.7 RS or 911 R models, it’s sure to appeal to Porsche collectors. Besides, we rather like the 911 is its pure, unadorned state, without even the optional ‘Whale Tail’ spoiler to break up that classic silhouette.

Paul Michaels, chairman of Hexagon Classics, said: “This is a massive opportunity for someone to purchase a true collector’s item. It is always difficult to find 911s of this era with low mileage – they were built to be used daily after all – but to find a Carrera 3.2 with less than 5,000 miles on the clock is almost unheard of.”

Let’s hope that lucky new owner actually drives it, rather than leaving it in air-conditioned storage fro another 31 years…