The London Motor Show is back for another year at Excel. We took a tour to show you what’s on show at Britain’s biggest new car exhibition 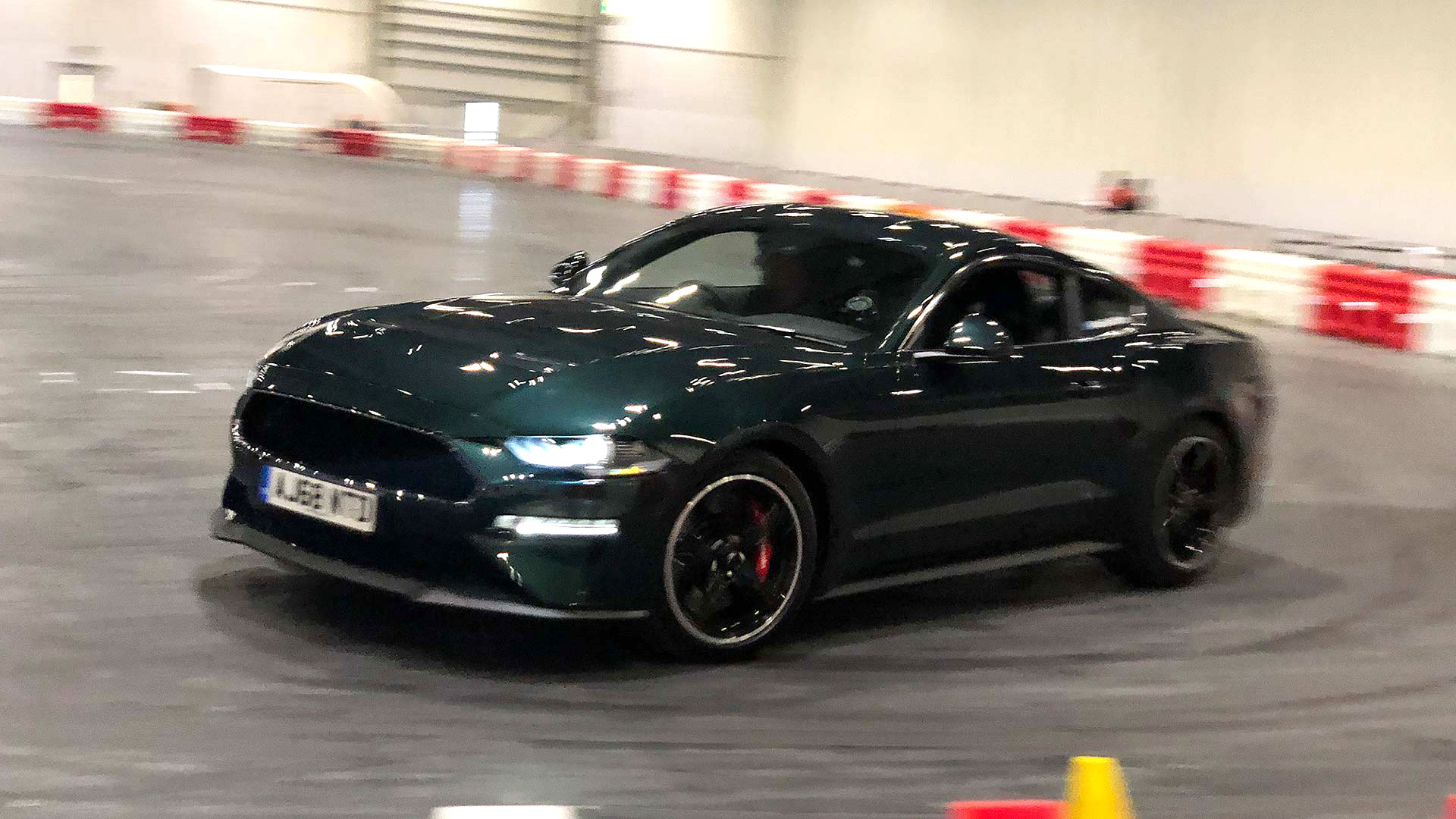 The London Motor Show is back for another year in 2019 at Excel in London’s Docklands. The organisers are calling it a new breed of motor show, where live action is as much of a draw as the new cars displayed on brand’s stands.

Tyre-smoking action is guaranteed throughout the four-day show: if you’re visiting this weekend (18-19 May), here are some of the other supercars, award-winning cars and British car reveals you must check out. 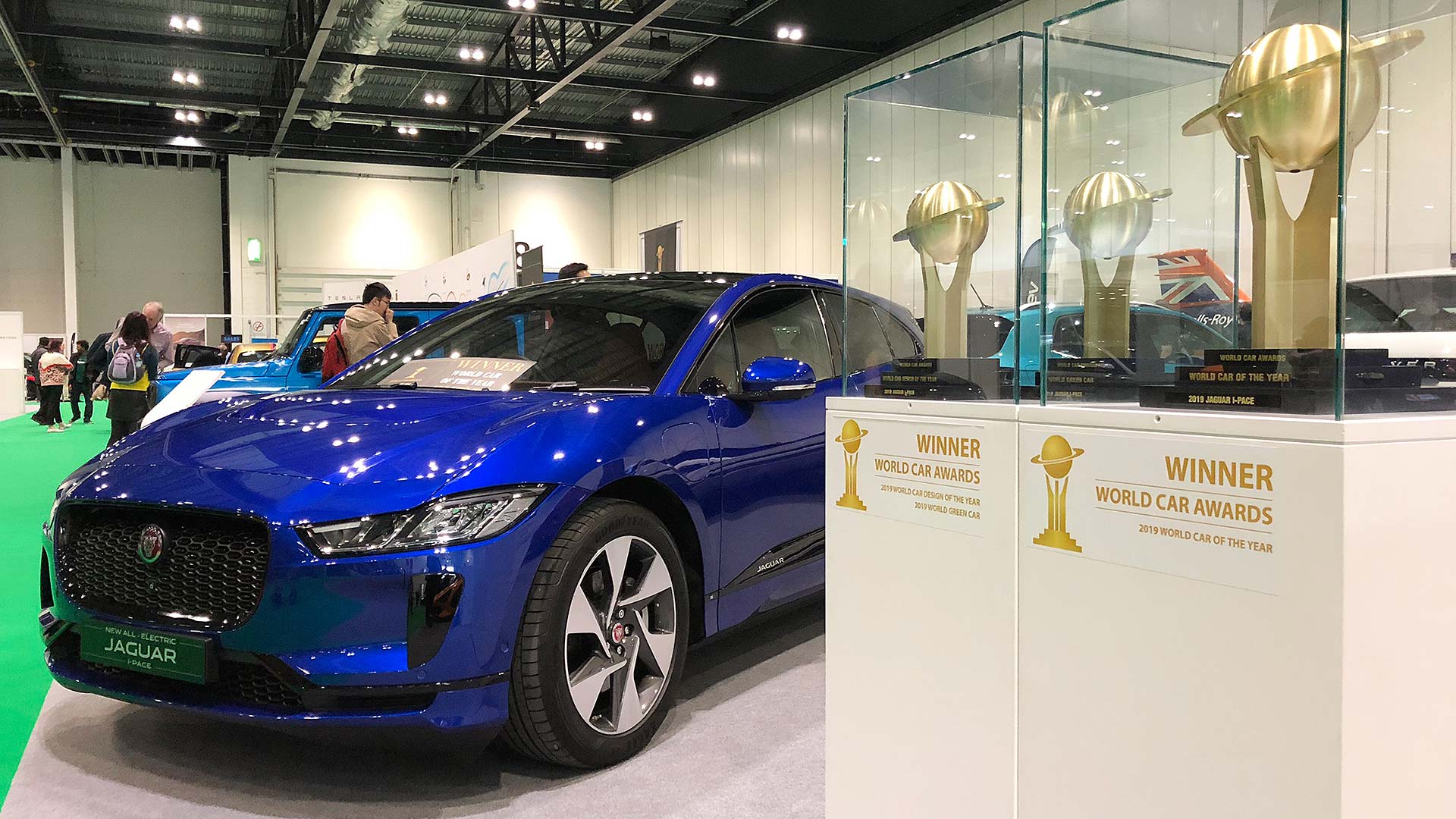 The Jaguar I-Pace is the star car on the World Car Awards stand. This year, it scooped an unprecedented THREE prizes at the awards ceremony in New York – World Green Car, World Car Design and overall World Car of the Year 2019. It’s shown alongside the actual gongs borrowed from Jaguar’s trophy cabinet… 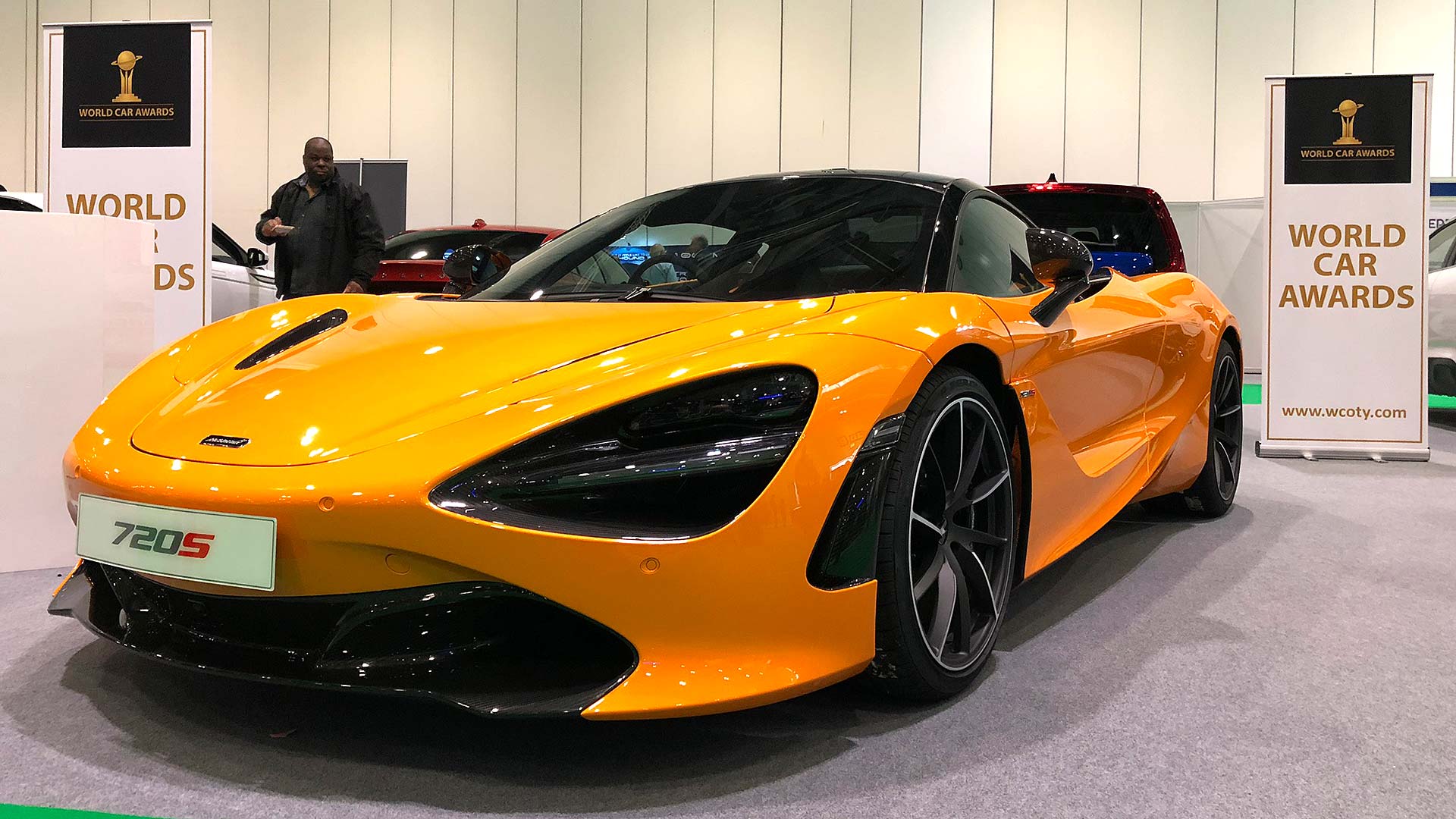 The McLaren 720S is another World Car Awards winner, taking the 2019 World Performance Car prize. And it seemed to be one of the most-photographed exhibits at this year’s London Motor Show. 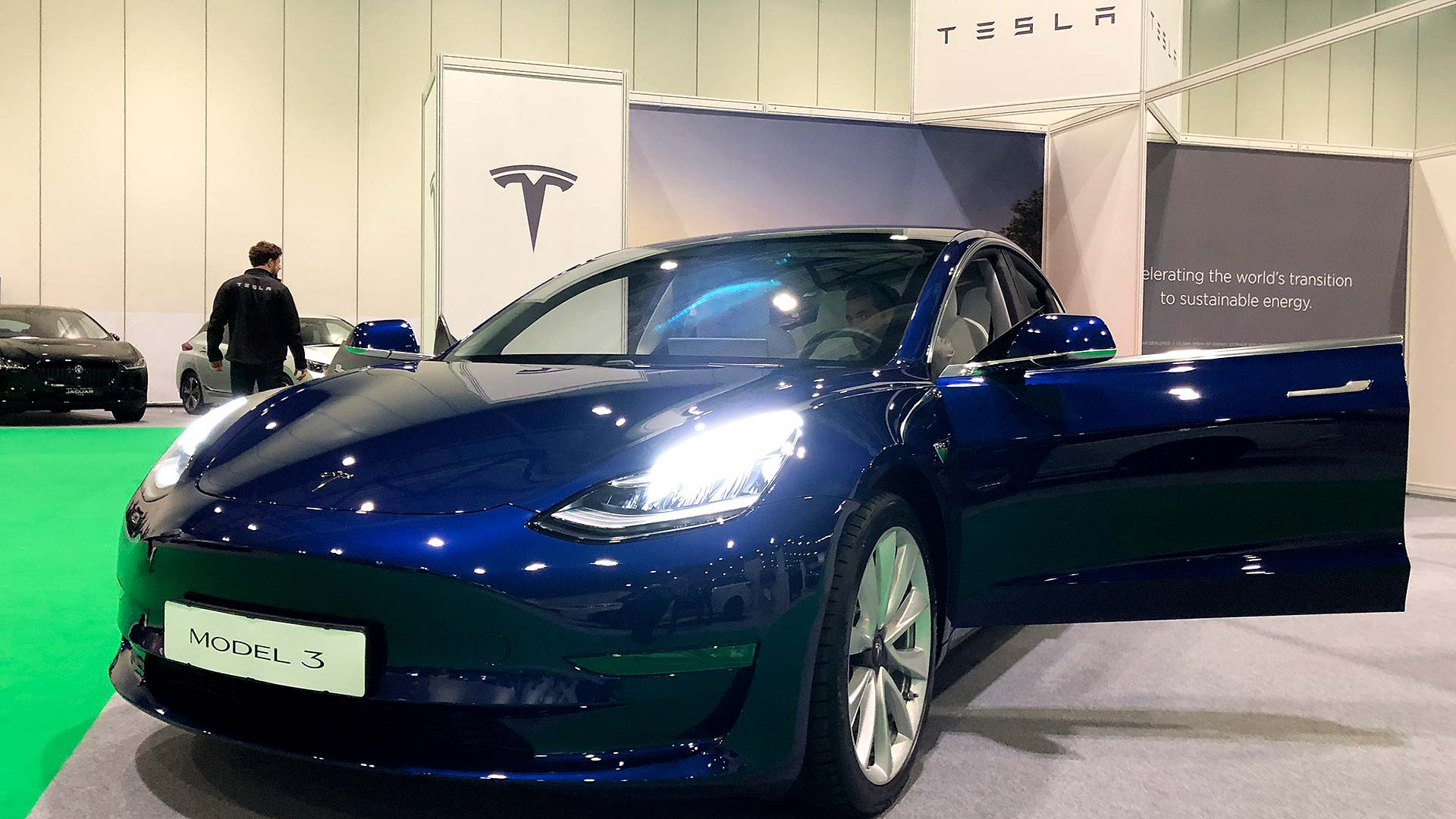 The Tesla Model 3 is at last landing in the UK! One of the must-have, most hotly-anticipated new EVs of 2019 is sure to draw plenty of interest this weekend. 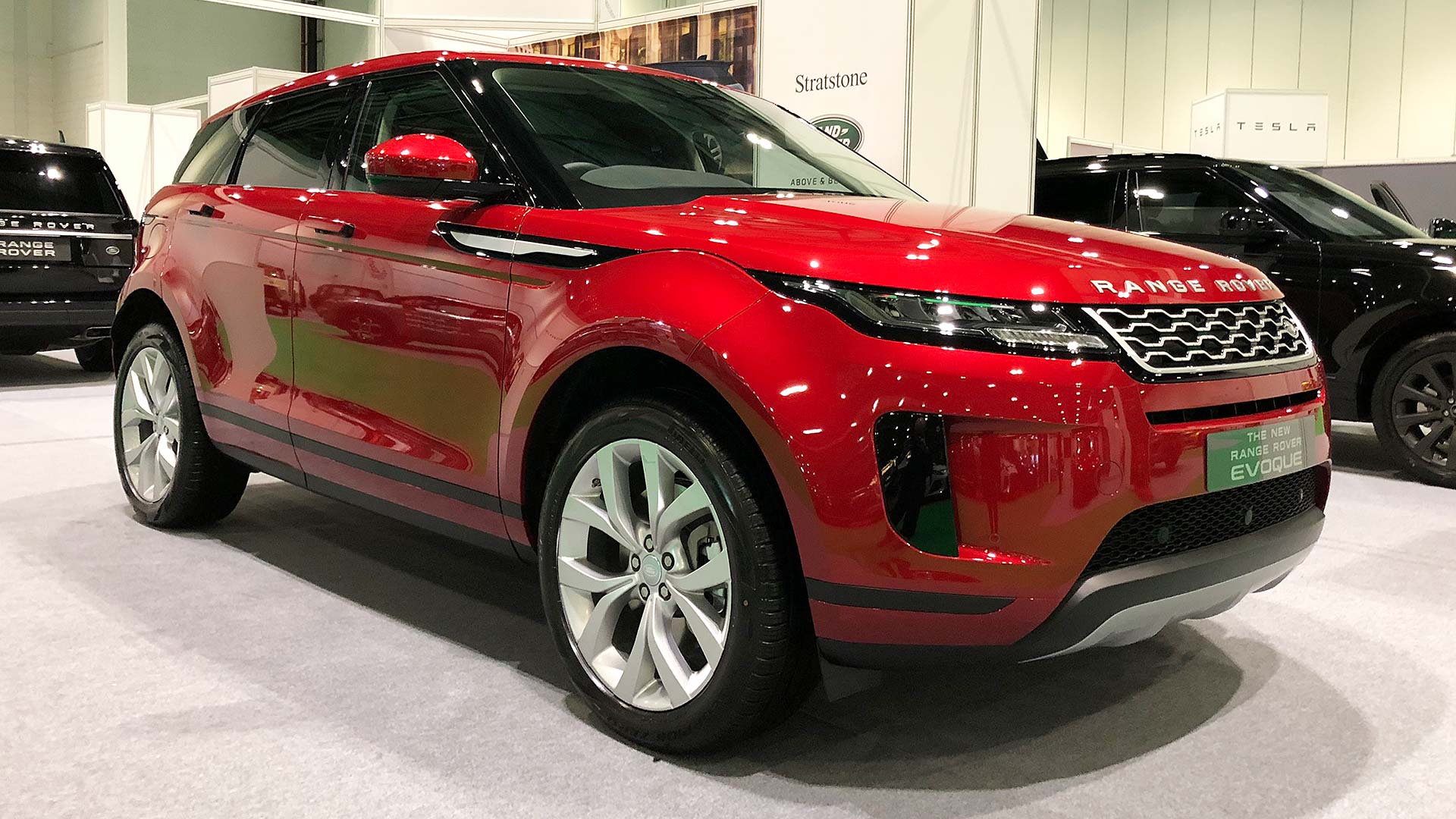 Another new model arriving in dealer showrooms right now is the latest Range Rover Evoque. The firm is hoping it can repeat the incredible success of its sector-defining predecessor. 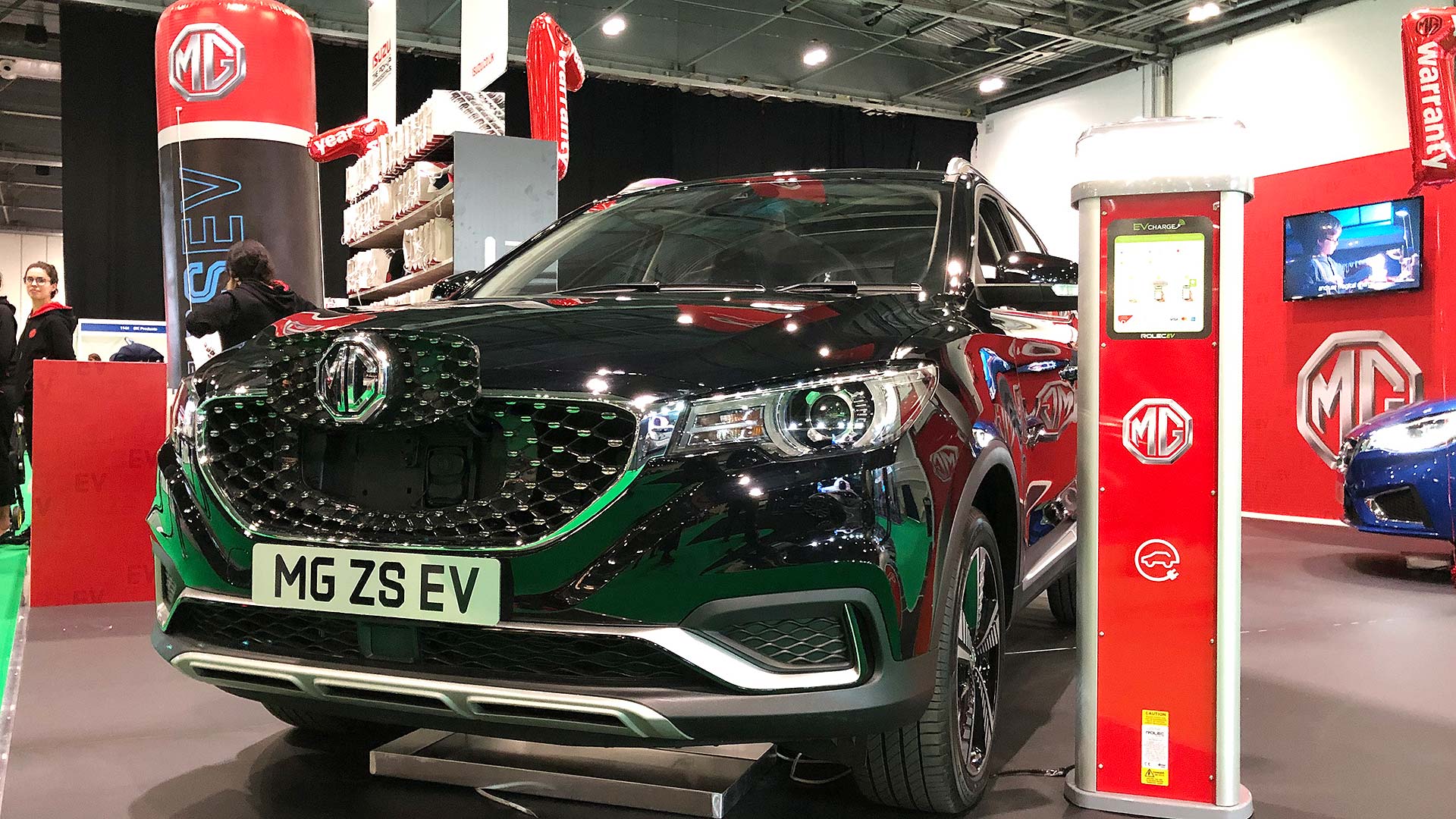 British brand MG actually gave its all-electric ZS EV a British market debut at the Excel Docklands show. It arrives later this year and the firm is targeting both an incredibly competitive price tag and a range of over 200 miles. Bosses are quietly confident this could be a game-changer for the reborn firm now based in Marylebone, London. 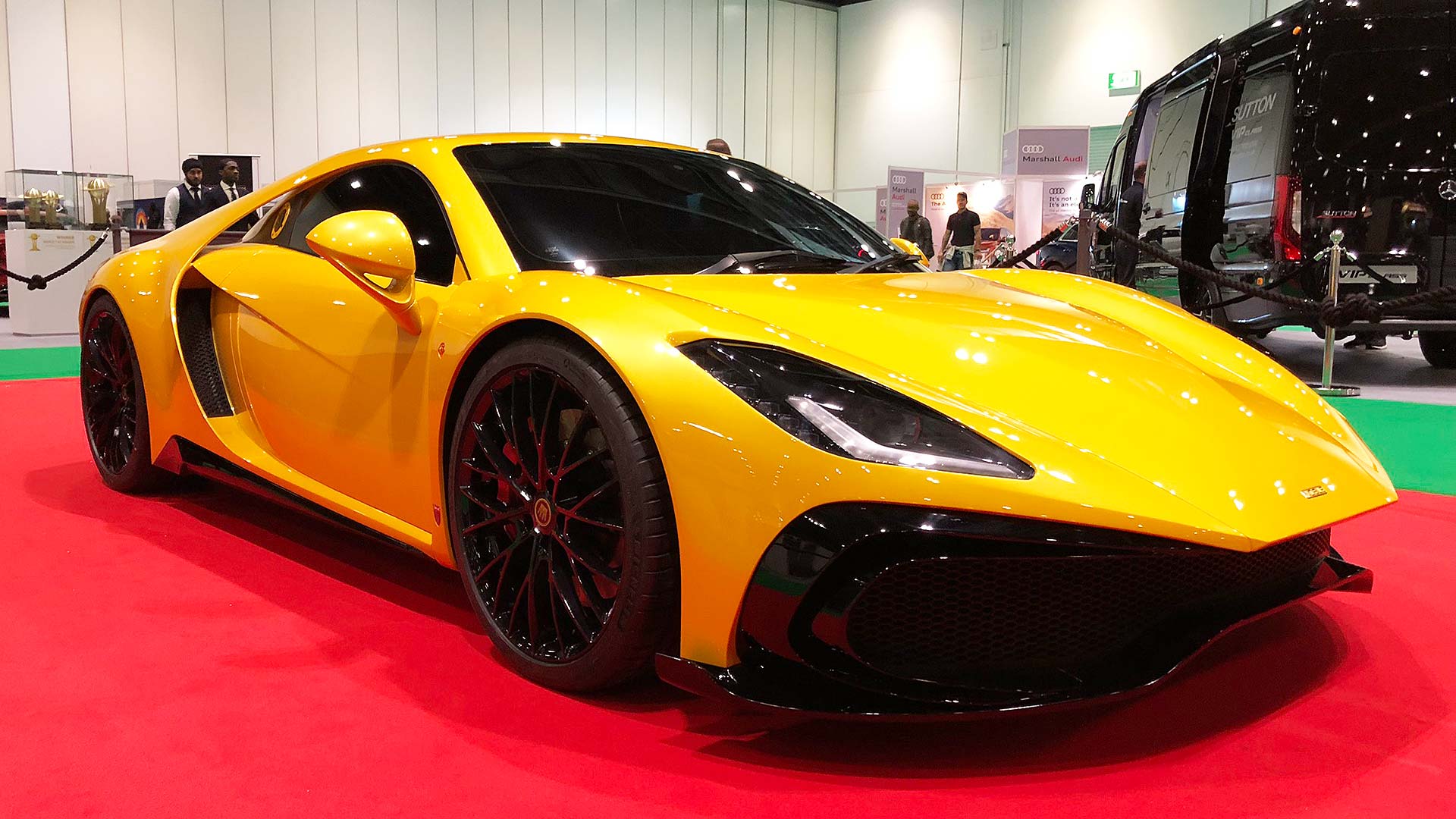 The more affordable alternative to the Noble M600 supercar, the M500 is Noble’s vision of what its sports car rival to the McLaren 570S could look like. Boasting a Ford V6 twin-turbo putting out 500 to 550 horsepower, this model is in development right now. The prototype is an early look at what’s in store… 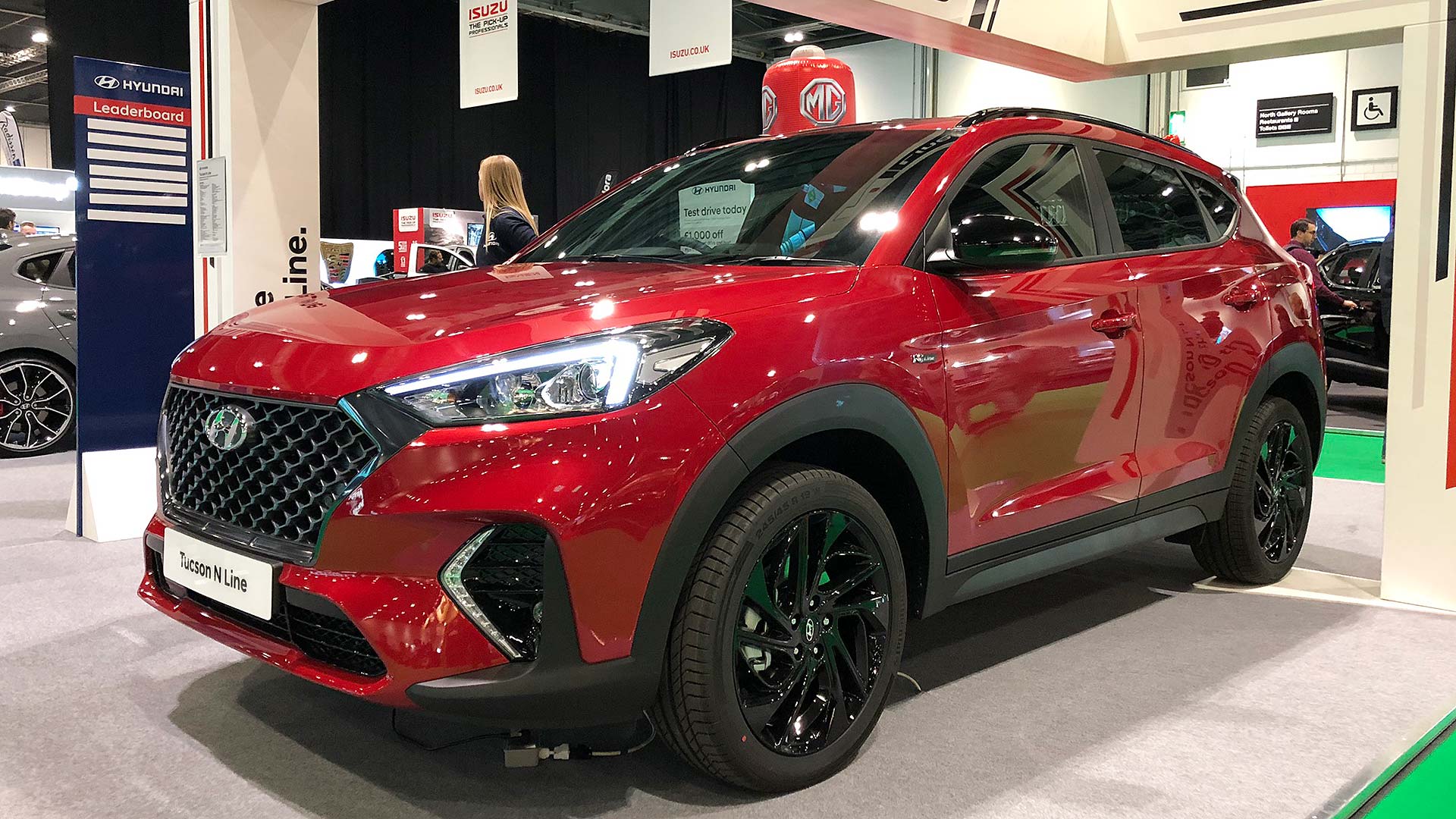 Hyundai has only just announced the N-Line series for its popular Tucson family SUV, yet it’s already here on show in London. Standout features include sportier wheels and black-accented body cladding, plus a neat set of black door mirrors. 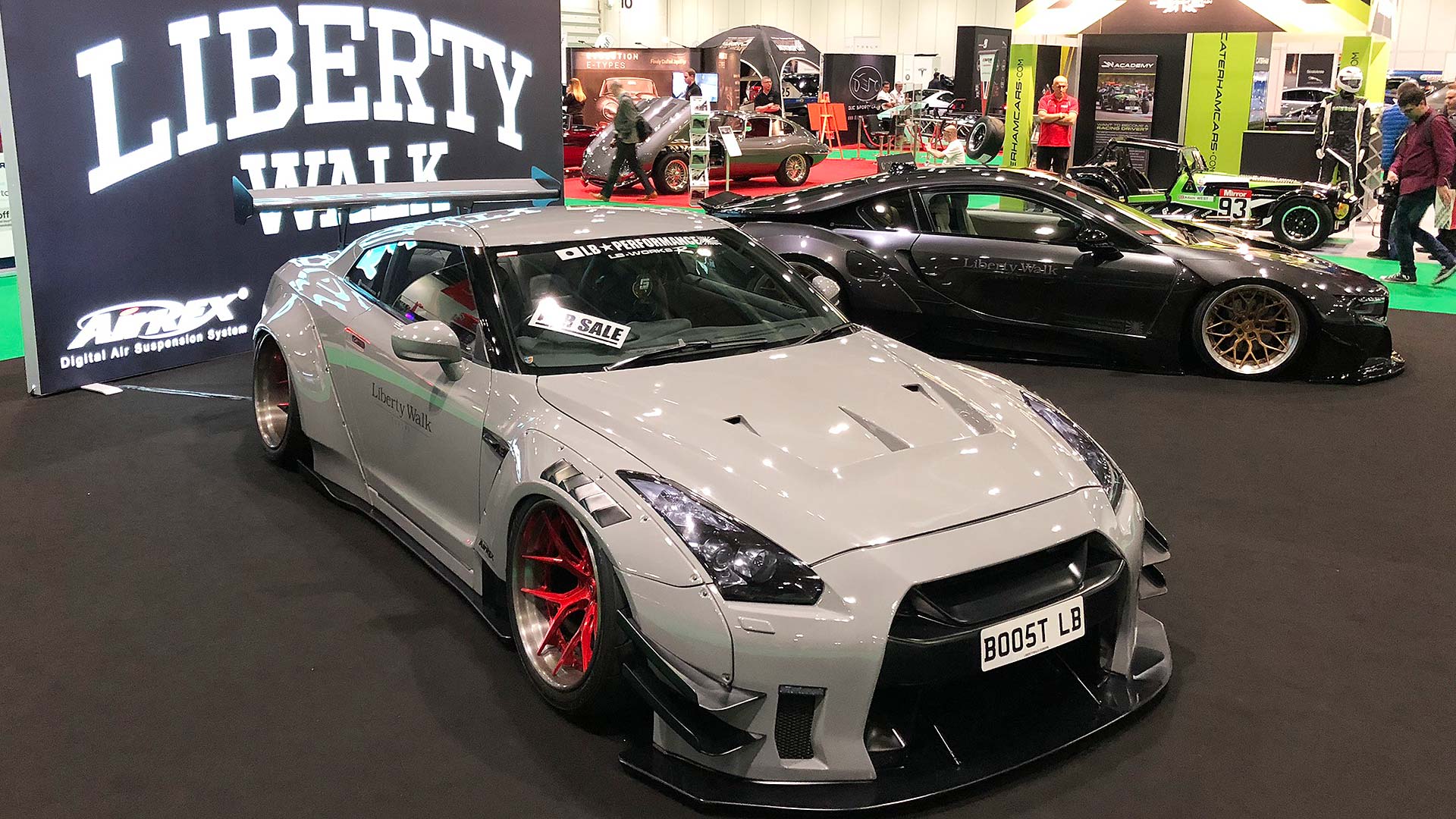 Liberty Walk is one of the most talked-about and controversial modding companies of recent years. If you want the stance and aero of a racing car, they’ll make it happen. They’ve applied their not-so-subtle touch to everything from Nissan GT-Rs to Ferraris and Lamborghinis. Such is the popularity of these rivet-happy modders, their kits are even available as upgrades on a variety of racing games. 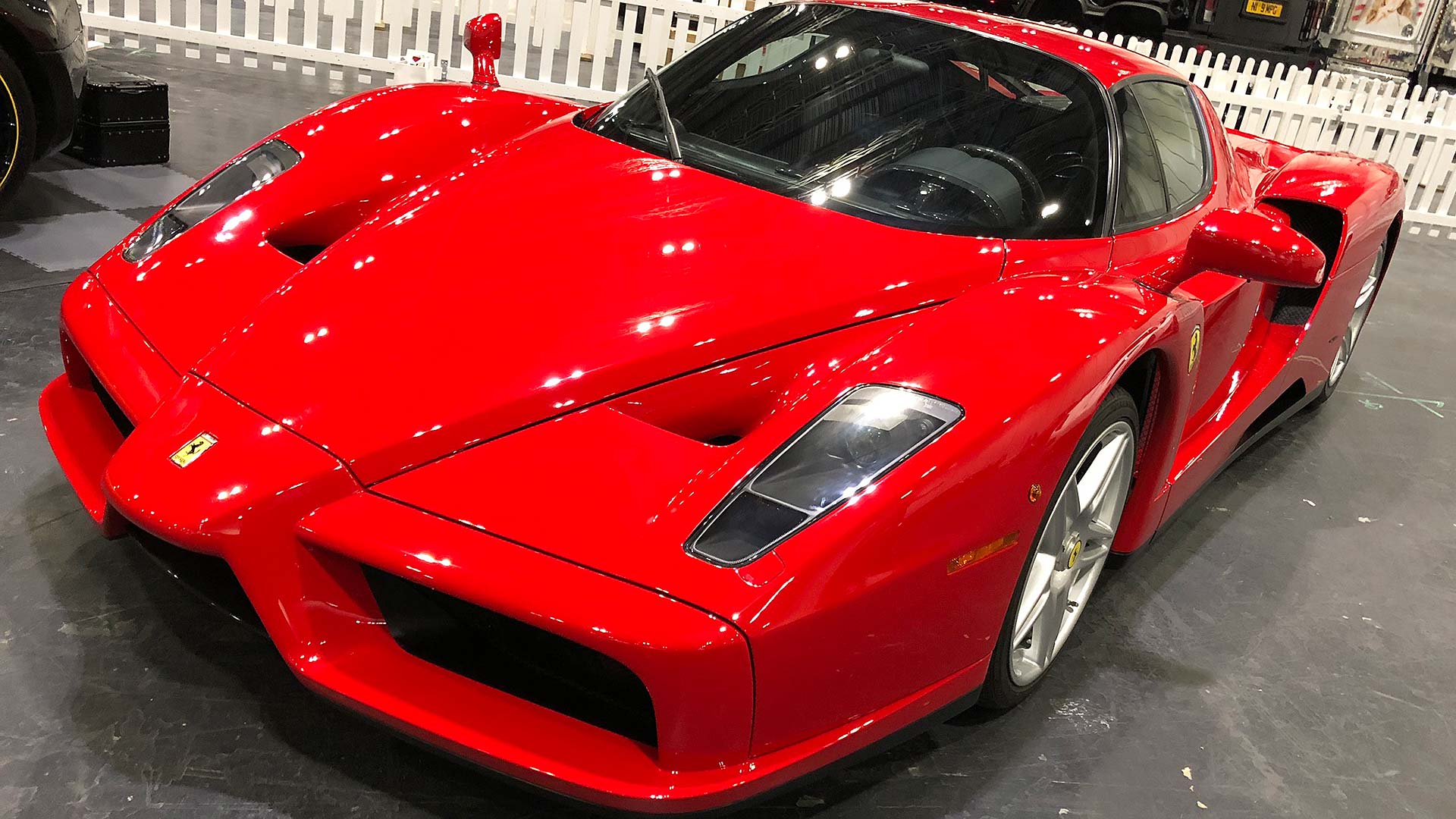 In the name of the Father. The Enzo was named after the man himself, Enzo Ferrari, otherwise known as the man that started it all in Maranello. The Enzo, originally F60, earned its name because of how proud the marque was of its creation back in 2002. A 650hp 6.0-litre V12, revolutionary paddle-shift transmission and an all-carbon structure and those striking looks made this one of the most desirable hypercars of the early 2000s. While it cost ‘just’ £600,000 in period, if you were lucky enough to be selected to buy one, today, Enzo entry costs well over £1 million… 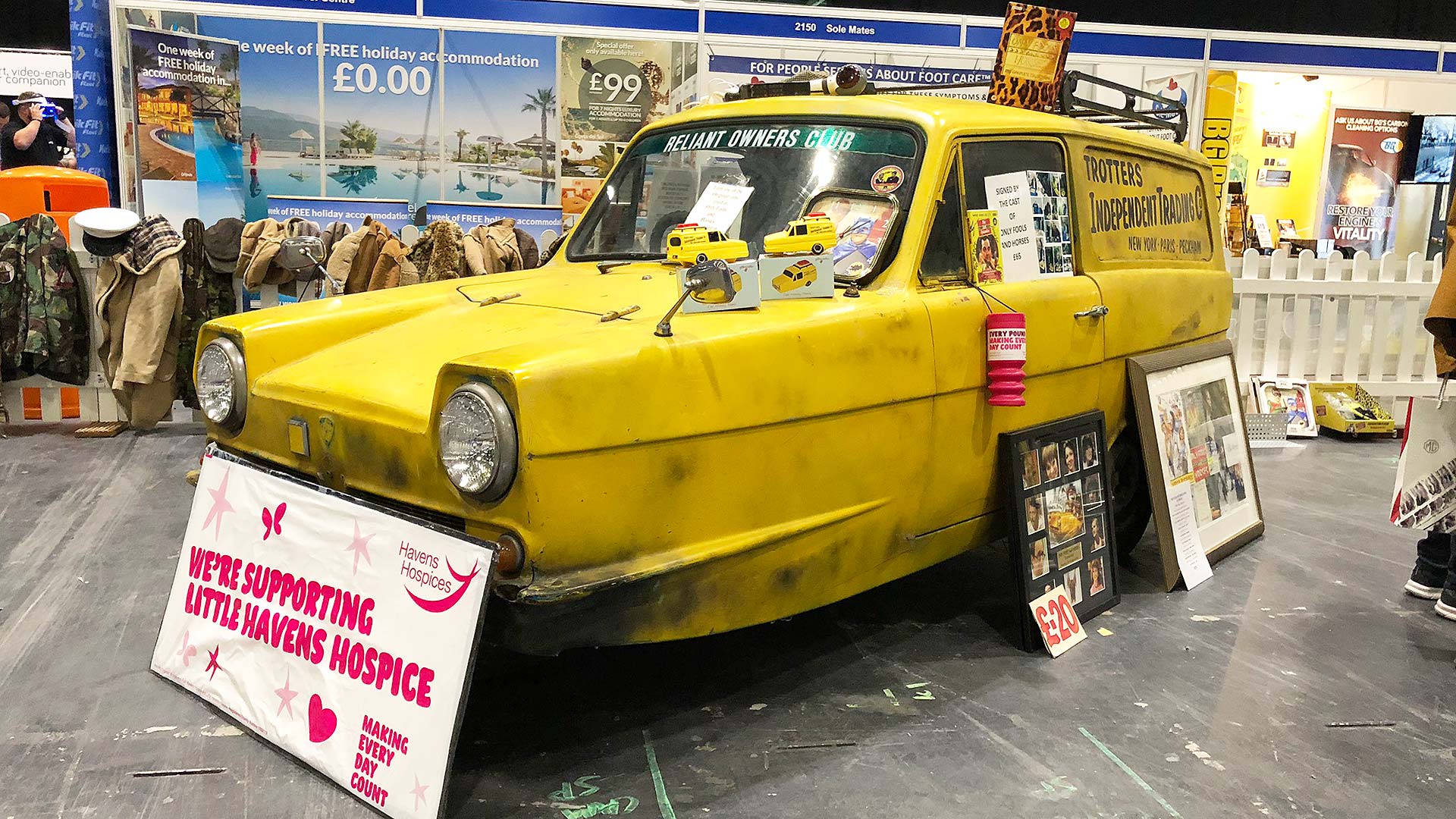 It wouldn’t be a true East London car show if there wasn’t an Only Fools and Horses van on show, would it? This is one of several cars actually used by Del Boy and Rodney in the 1980s sitcom.

Back to the Future DeLorean 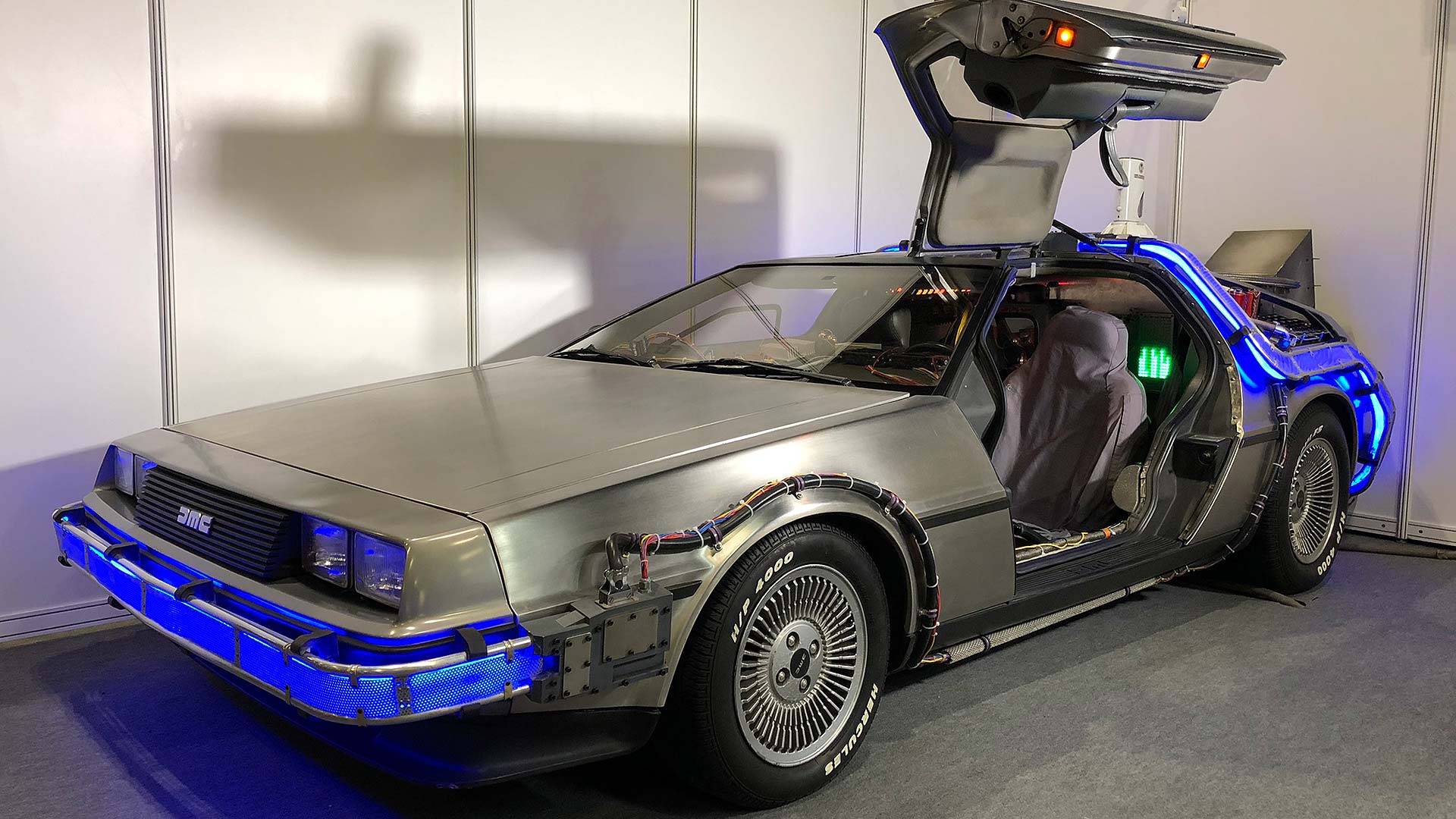 Another motor show regular is a Back to the Future DeLorean. Given that the first instalment was released back in 1985, it’s likely to be dads rather than their kids queuing up here to have their photo taken in it… 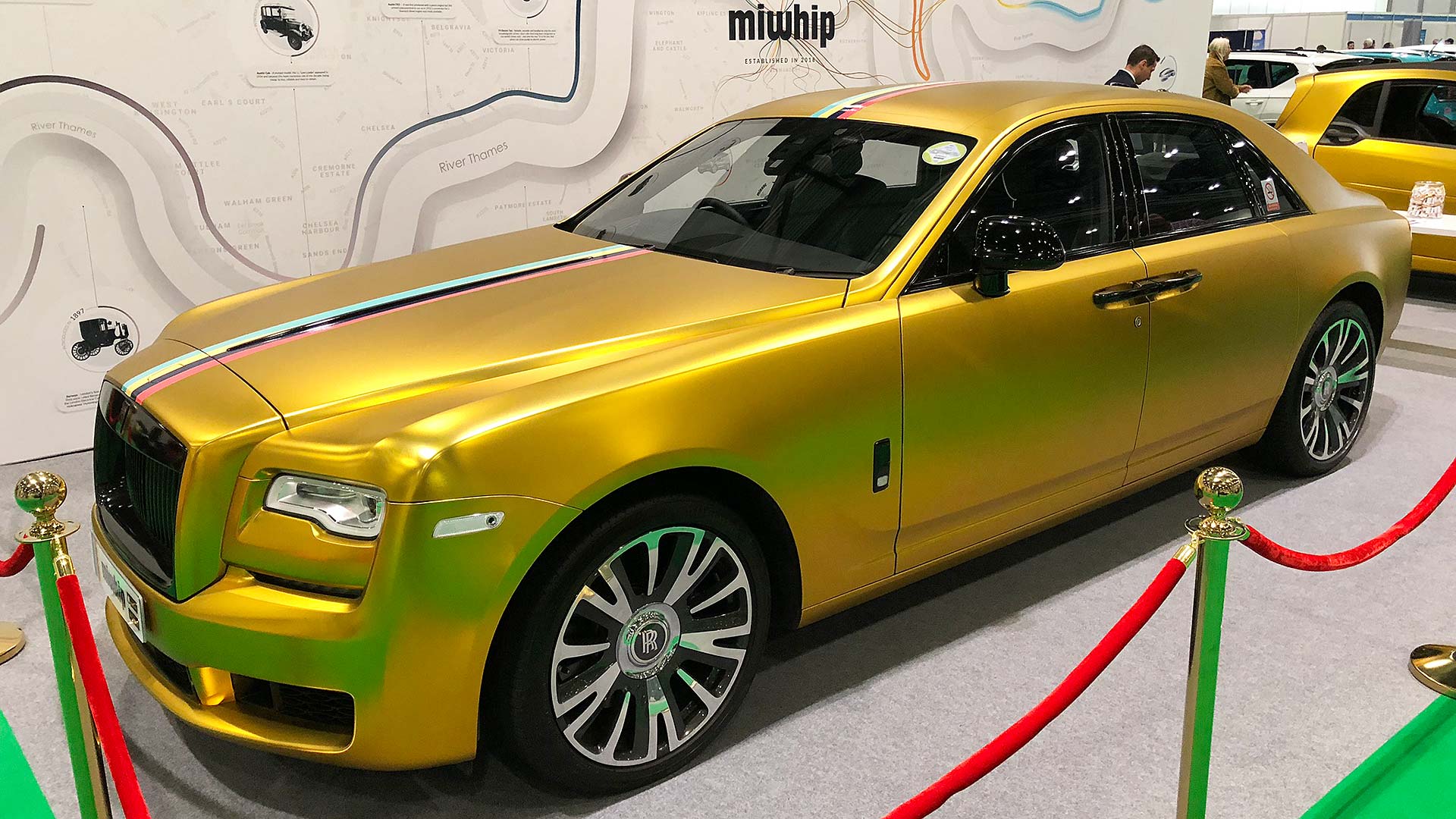 For when your bank balance far outstrips any sense of taste you might call upon, there’s this golden Rolls-Royce… 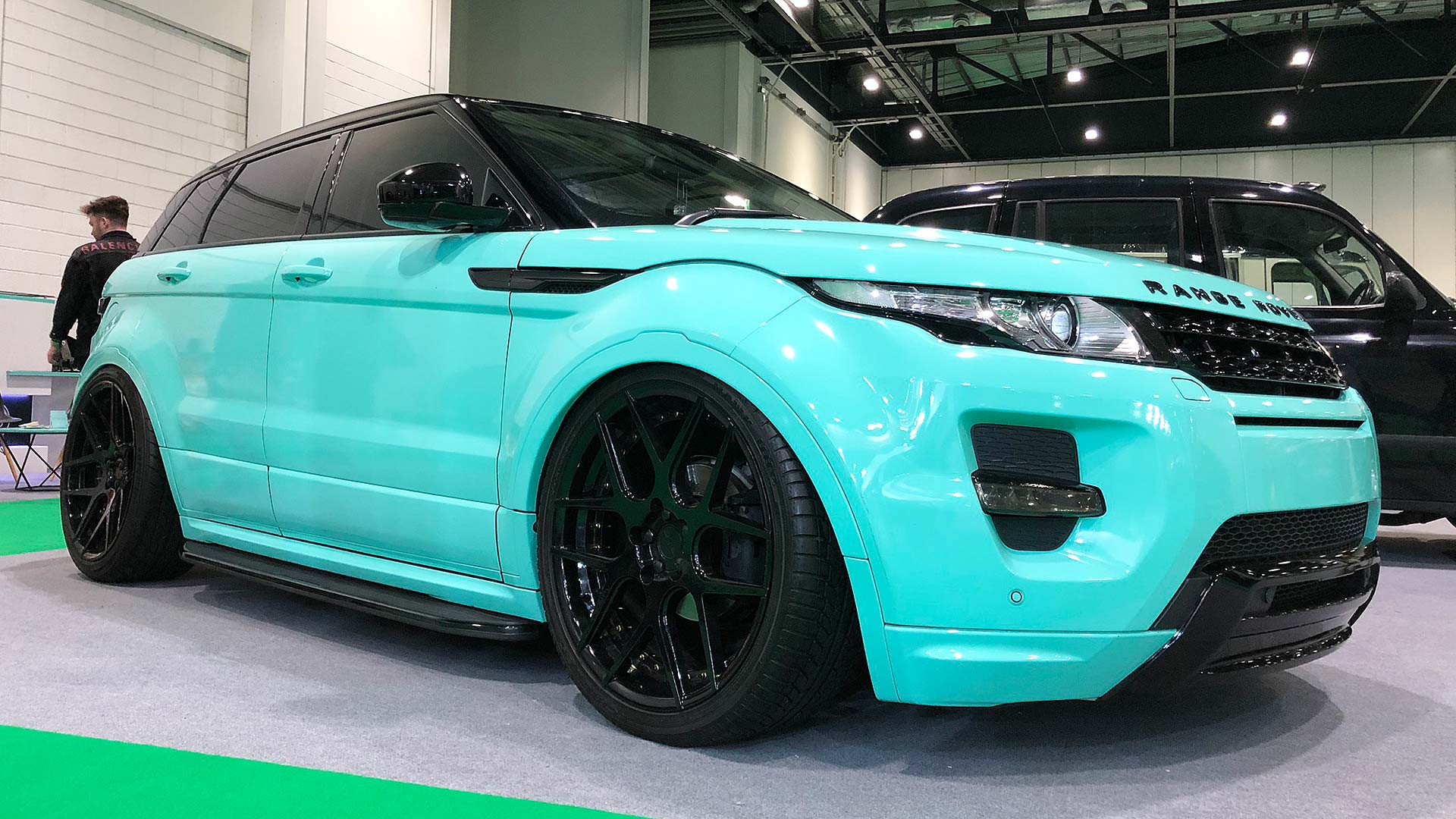 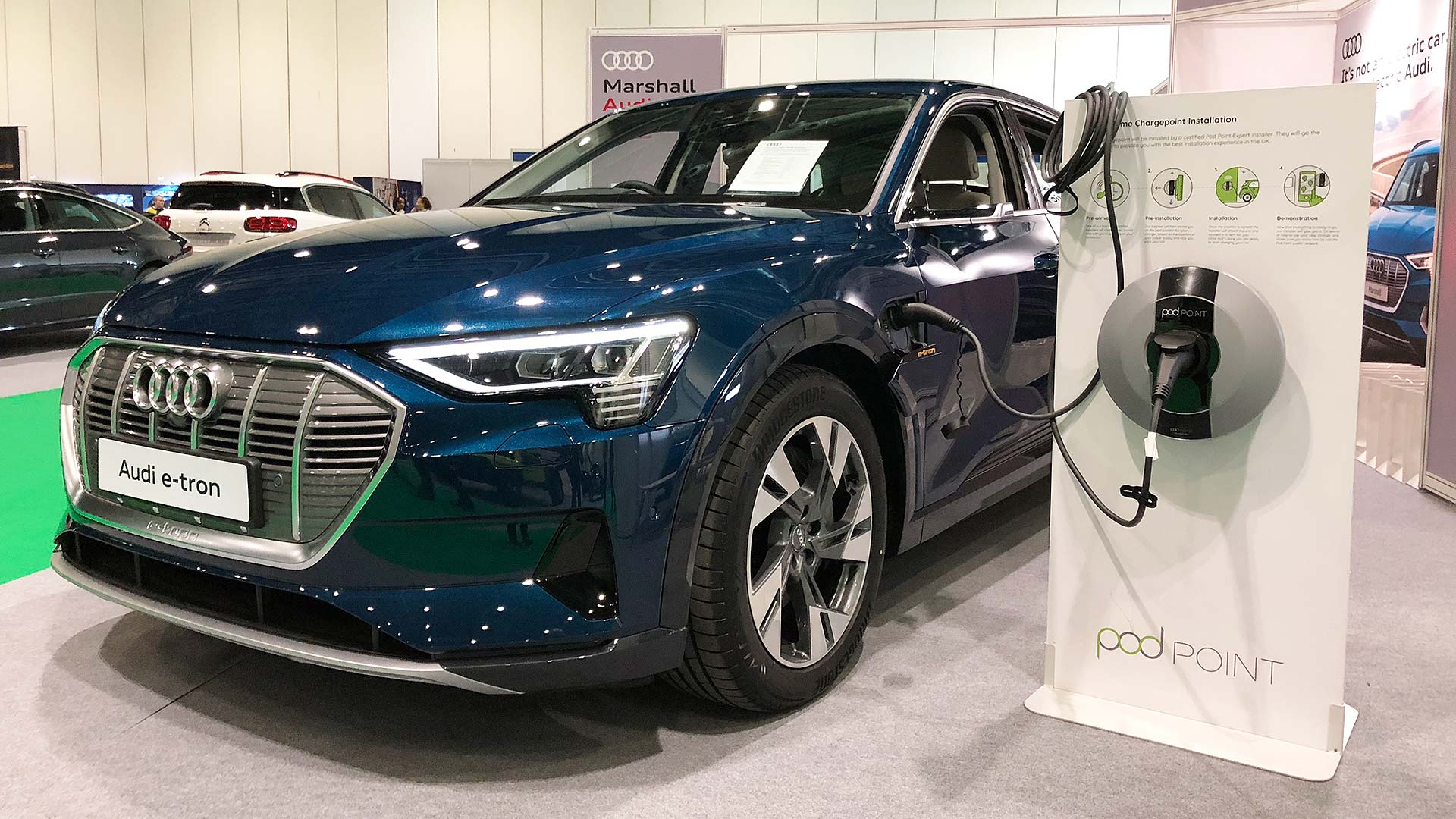 The Audi e-tron is the all-electric rival to the Jaguar I-Pace. Britain pipped Germany in the World Car Awards finals, leaving the e-tron as a still-worthy runner-up. 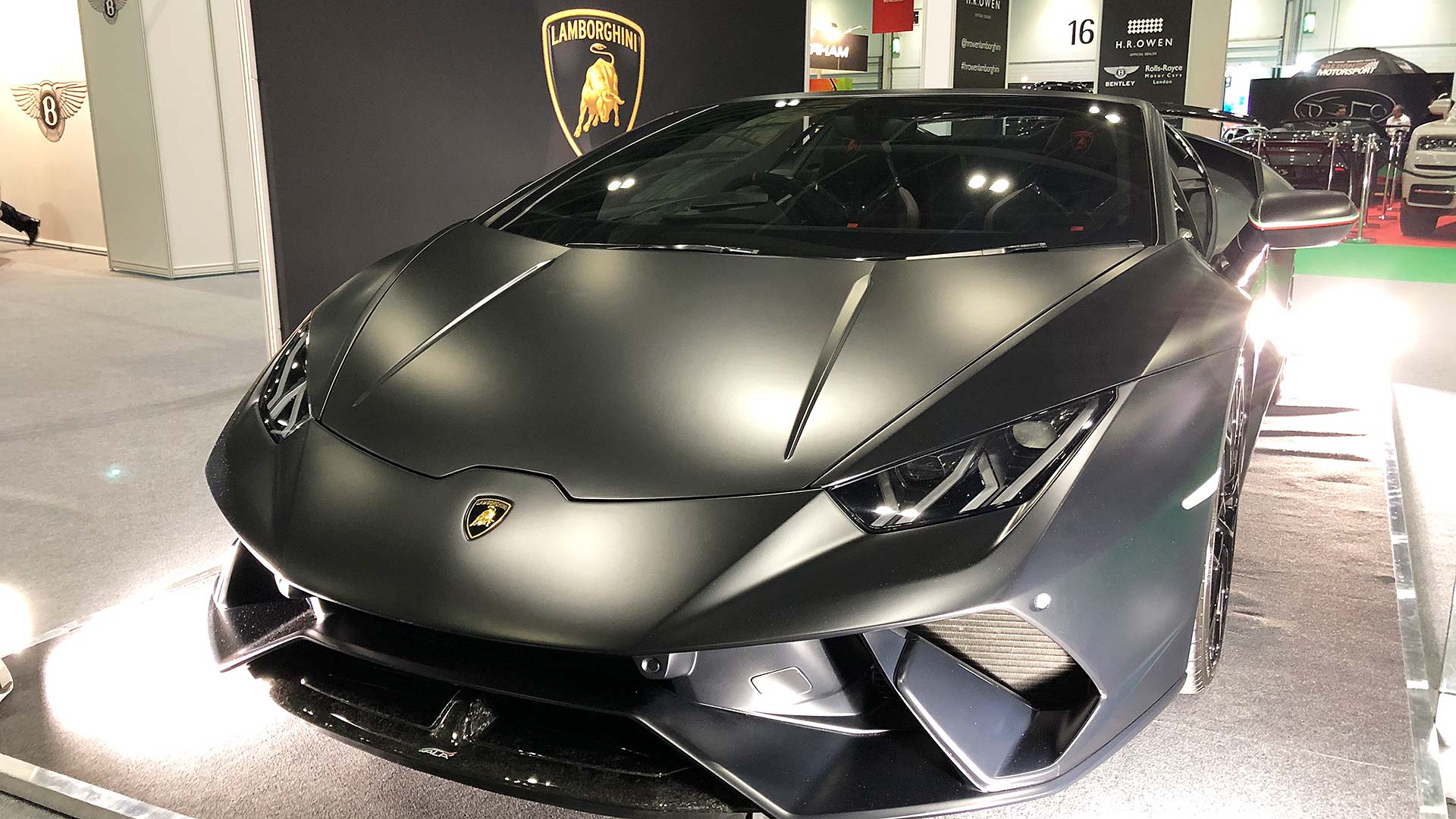 The mighty Lamborghini Huracan Performante Spyder is on display at the London show. The hard-top coupe set a Nurburgring lap record, and the Spyder is not likely to be far behind. It puts out 640 horsepower from its mid-mounted V10 engine, but it’s the noise and spectacle that’s more of a draw for most… 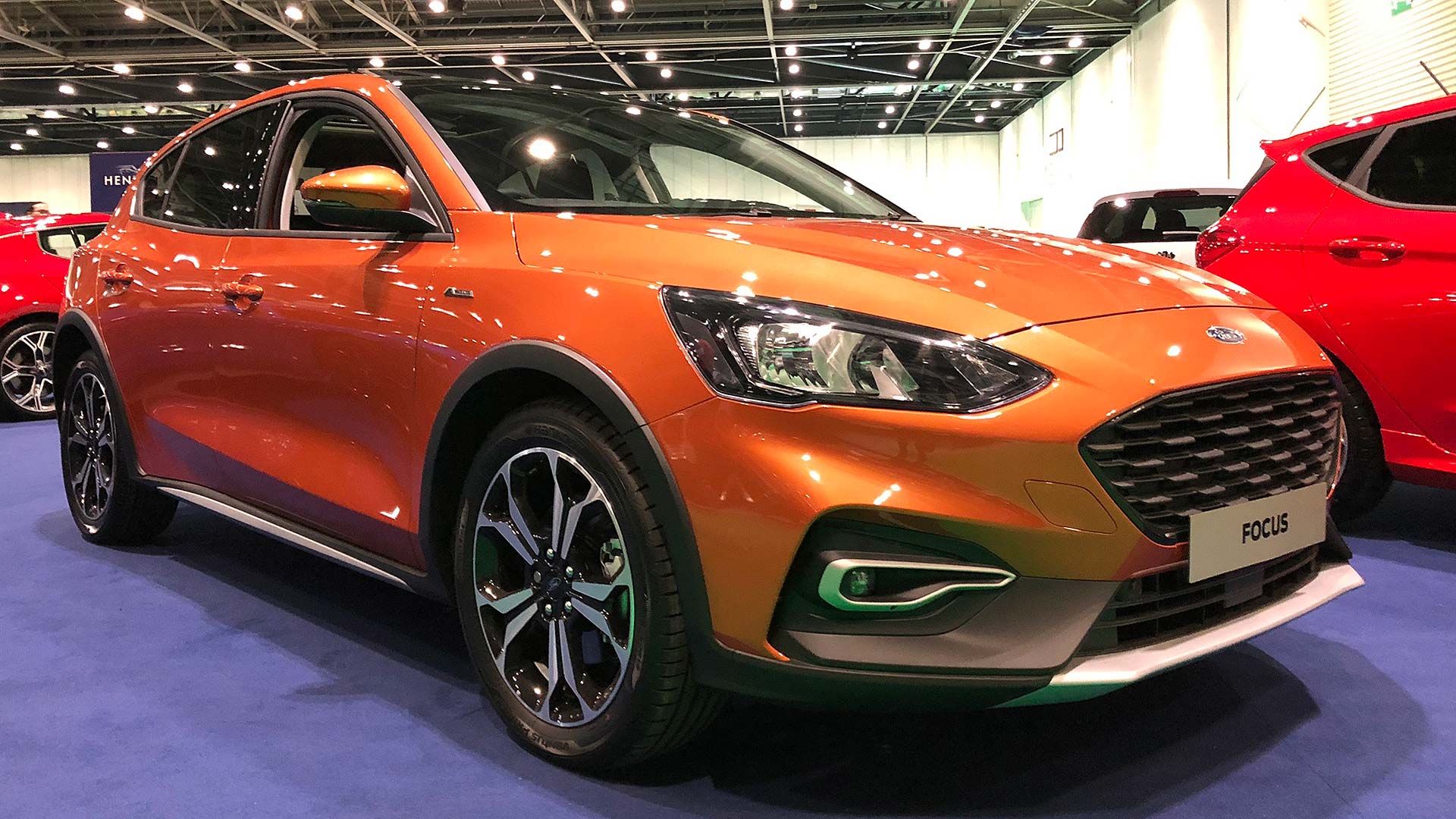 The Focus Active is Ford’s ‘in-betweener’ SUV. It’s a raised-up Focus with extra body cladding and tougher bodyside mouldings, for those who want to feel a bit more secure and all-roads ready without going all-out with an SUV. 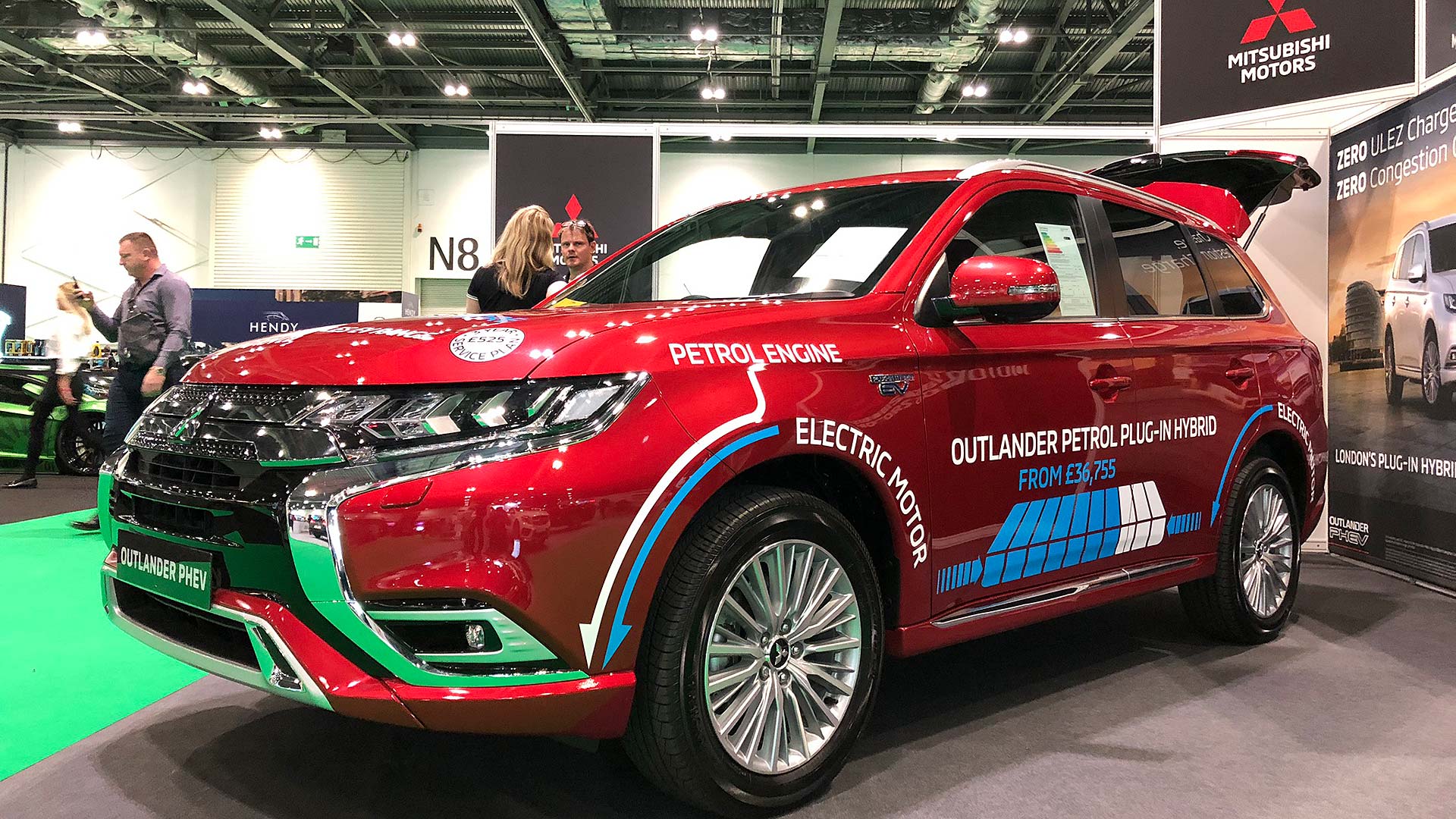 The Outlander PHEV (and its commercial van sister car) is Mitsubishi’s answer to the London ULEZ. The Japanese brand is here at the London Motor Show 2019 with an officially-backed stand to support its London-based dealers in spreading the message. 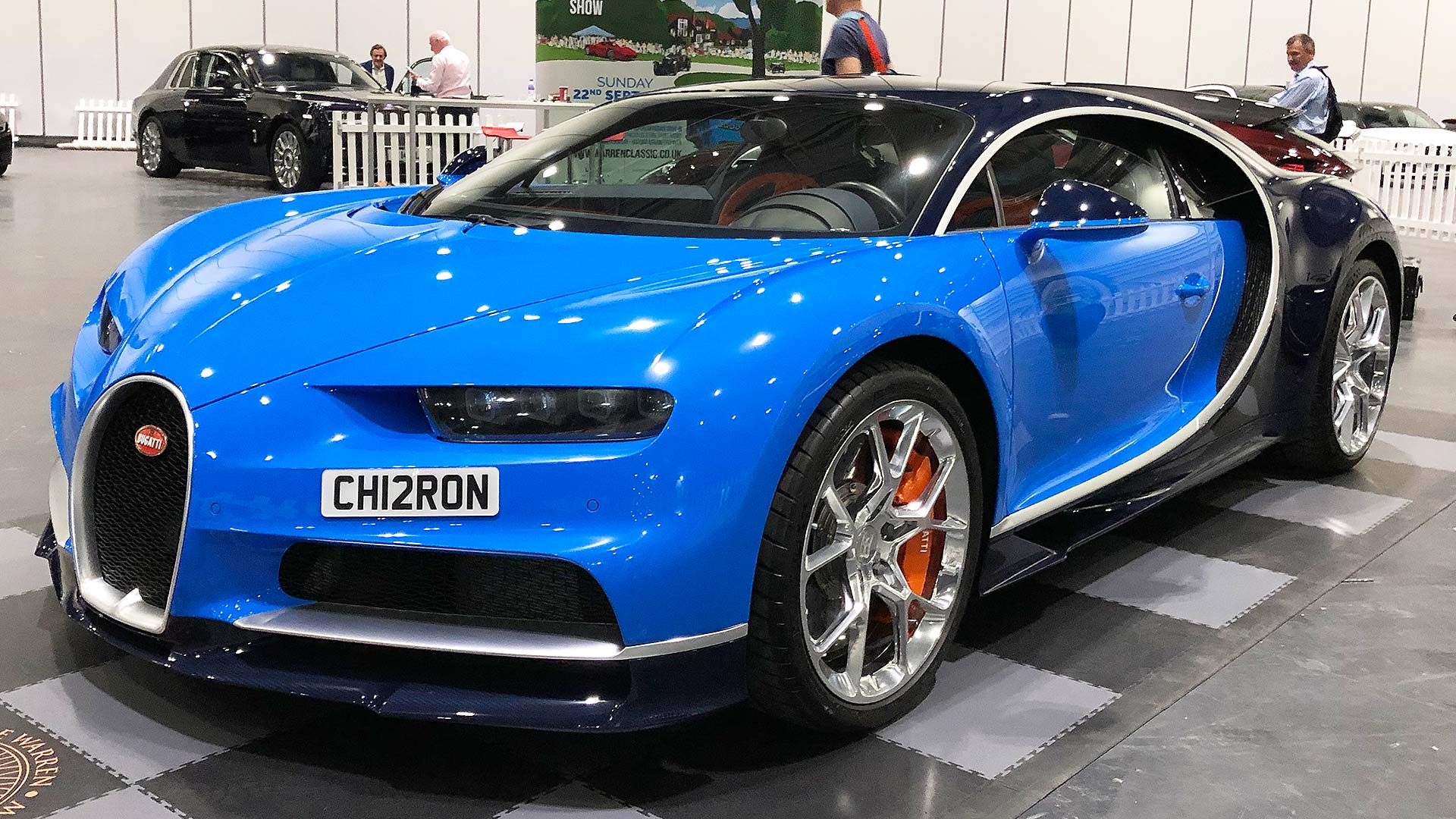 London is lucky enough to have what could be the world’s fastest car at the 2019 Excel show. The Chiron has yet to set a top speed challenge… 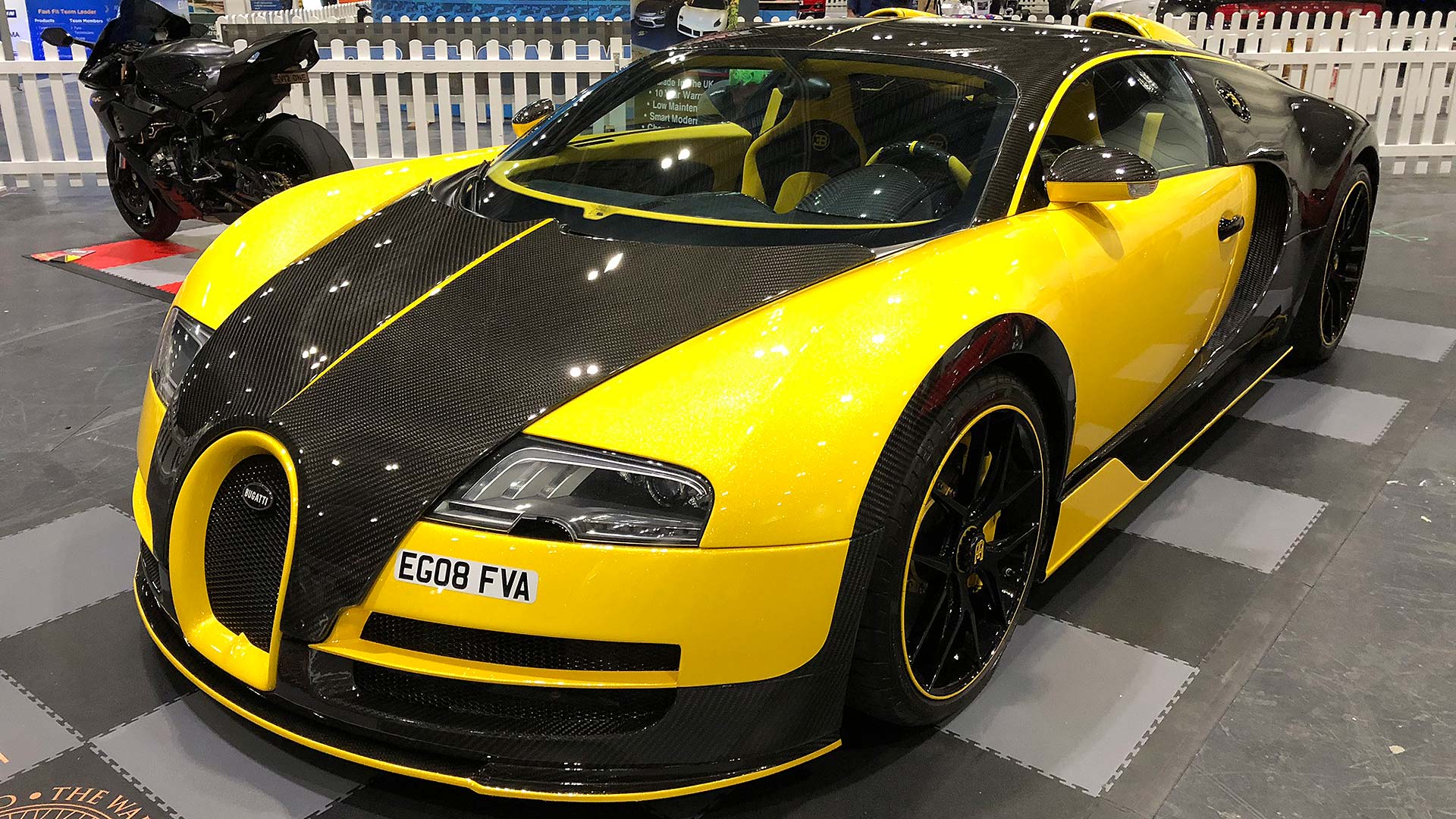 … But it’s sure to beat the 261mph time set by the ultimate version of its Bugatti Veyron predecessor, right?

Safety first: does your car need to be recalled?

The great British blunder: 50 years of the Austin Maxi

Fiat has revealed pricing for the mild hybrid variants of its small cars, including the hot cakes-seller 500, and the boxy Panda
Read more

Family cars with 5 stars for safety

Looking to transport your children? We reveal the family cars awarded the maximum five-star Euro NCAP safety rating in 2016 and 2017.
Read more

St Athan 'phase 1' is now complete; it's on track to open later this year
Read more

You can now Skype from a Volvo

Mercedes-AMG Project One: an F1 racer for the road (WITH VIDEO)

We see the new Mercedes-AMG Project One hypercar up-close at the Frankfurt Motor Show. Read our first impressions of the 1,000hp F1-derived AMG flagship
Read more