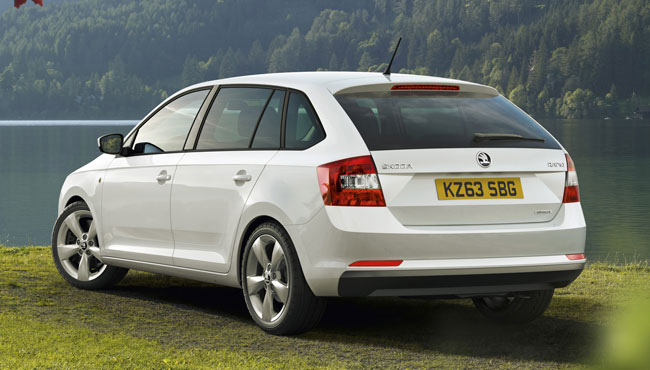 We’re used to manufacturers churning out so-called ‘green’ versions of their hatchbacks with CO2 emissions below the 100g/km barrier – meaning free road tax and favourable company car tax rates. Ford has its Focus Econetic, Volkswagen has its Golf Bluemotion, and Vauxhall has its Astra Ecoflex.

And now, I’m heading to Amsterdam to drive Skoda’s version – the Rapid GreenLine. As you’d expect for a Skoda, it represents excellent value for money (on paper at least), and it’s a little bit unconventional compared to its hatchback rivals.

If you’re not already familiar with the Skoda Rapid, it’s a hatchback with a saloon-style boot that sticks out, similar to that of the Octavia. That means it’s got loads of boot space – 550 litres, compared to the Volkswagen Golf’s 380.

Not everyone wants their hatchback to look like a saloon, which is why Skoda introduced the Rapid Spaceback. Think of it is a budget Audi A3 Sportback – a kind of shrunken-down estate, only with a smaller boot than the hatchback (415 litres).

The Skoda Rapid Spaceback GreenLine starts at £17,195, while the regular Skoda Rapid GreenLine costs £17,535. For comparison, the Ford Focus Econetic starts at £17,945, while the Vauxhall Astra Ecoflex costs from £17,735. It’s competitively priced, and available on the Motability scheme, so should appeal to a wide range of buyers.

Skoda has so far kept fairly quiet about how exactly it’s managed to reduce the CO2 emissions of its Rapid – not to mention the impressive fuel economy of 74.3mpg. We know it has low rolling resistance tyres, and we believe the suspension has been lowered by 20mm.

As CJ found the Rapid to have a rather harsh ride when he drove it back in 2012, it’ll be interesting to see how the suspension copes on the GreenLine model.