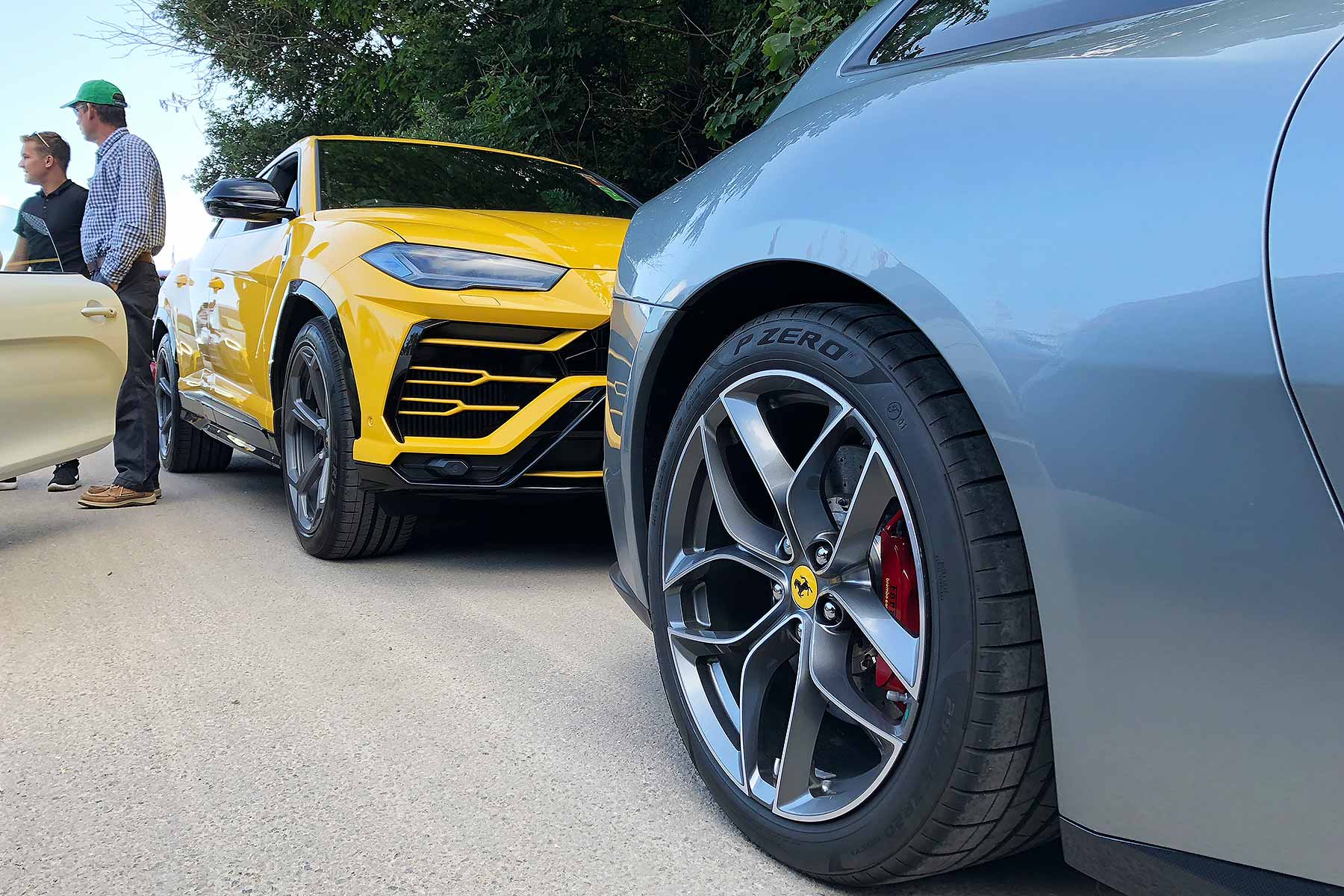 It was the first run of the first day of Goodwood Festival of Speed, and nobody was quite sure where they needed to be. I sprinted half the length of the hillclimb once it was confirmed, and met the Lamborghini people with no time to spare. Just a quick shot of the car, then get in and drive to the start line. 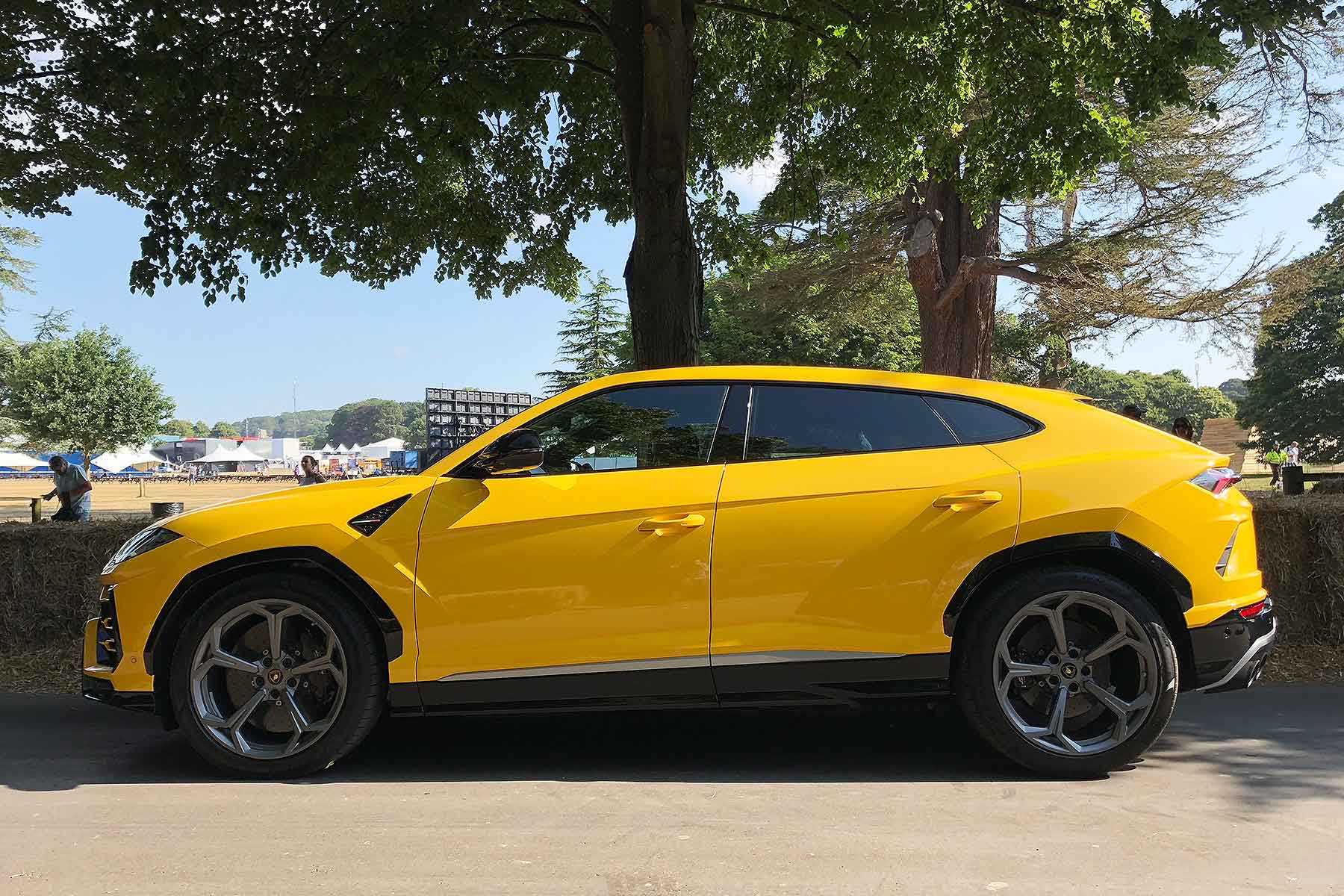 This was its UK dynamic debut (we were there for its London debut, too), which made me the first person to drive it in anger in public. And there was no missing me: yup, I had to have the bright yellow one. My Lamborghini instructor said he rather liked the dark metallic grey one. “Nah,” I said, “if you’re buying a Lamborghini, it’s got to be yellow, right?”

Even a 2.2-tonne Lamborghini SUV. The interior was similarly bold, and anything but SUV-generic, with all the drama of a Huracan blended with the high-tech sophistication of the latest Audi Q7 (well, it does share an architecture with it. And the Volkswagen Touareg. And the Bentley Bentayga).

This is the only SUV where you have to lift a red fighter-jet-style cover to press the start button. To be presented with a suitably Lamborghini-like rasp from the 650hp 4.0-litre V8. Shrinking violet? Not a bit of it. A few blips of the throttle to zing round the electronic rev counter (whose italic typeface matches Lamborghini’s supercars and screams drama) before a panicked marshal waves us on to wherever we need to be.

I look down. I can see aircraft thrust-style levers everywhere, but no actual button marked ‘D’. So I dab one of the paddleshifters to engage first and creep away. Huracans and Aventadors don’t really do ‘creeping’. Reflecting the needs of the people who will buy it, the Urus does it very well indeed. It’s a mellow, cushy drive to the start line and I’m beginning to feel chilled again. 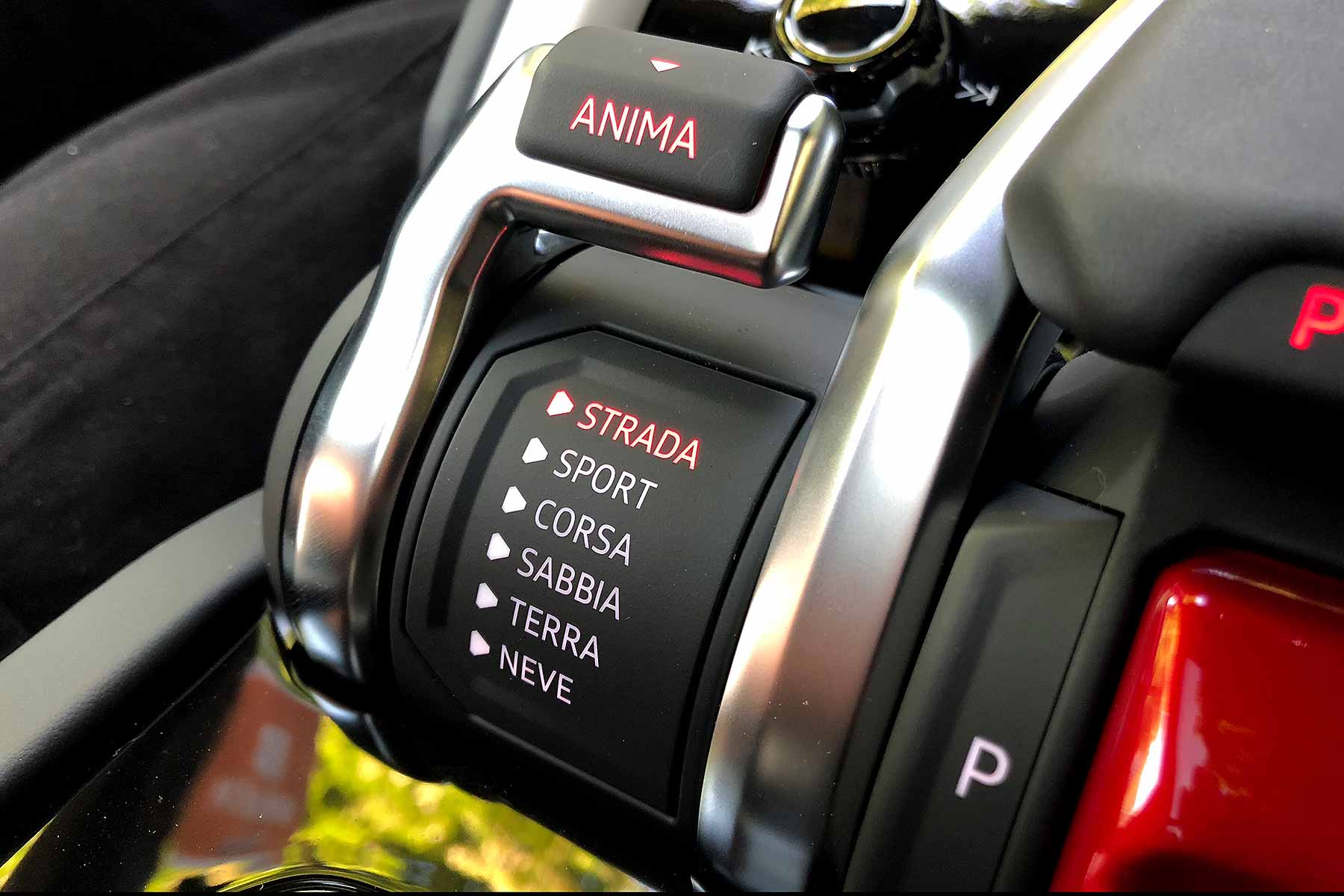 All the words on the drive selector are in Italian. Strada is mellow, Sport is Sport and Corsa is proper. It’s only later I discover that Sabbia means Sand, Terra is rough road and Neve is snow. Thank God I didn’t choose those. People wanted to hear this thing bellowing, to act as their early-morning wake-up call.

Finally, we were called forward. A 4×4 lining up on the famous Goodwood hillclimb start line bricks was once a novelty. Today it’s a regular occurrence. The head-turns here aren’t because it’s an SUV, but because it’s a Lambo SUV. One that, as the man waved me off, likely did 0-62mph in around 3.6 seconds. No thanks to me, launch control does all that. I simply held on in awe. 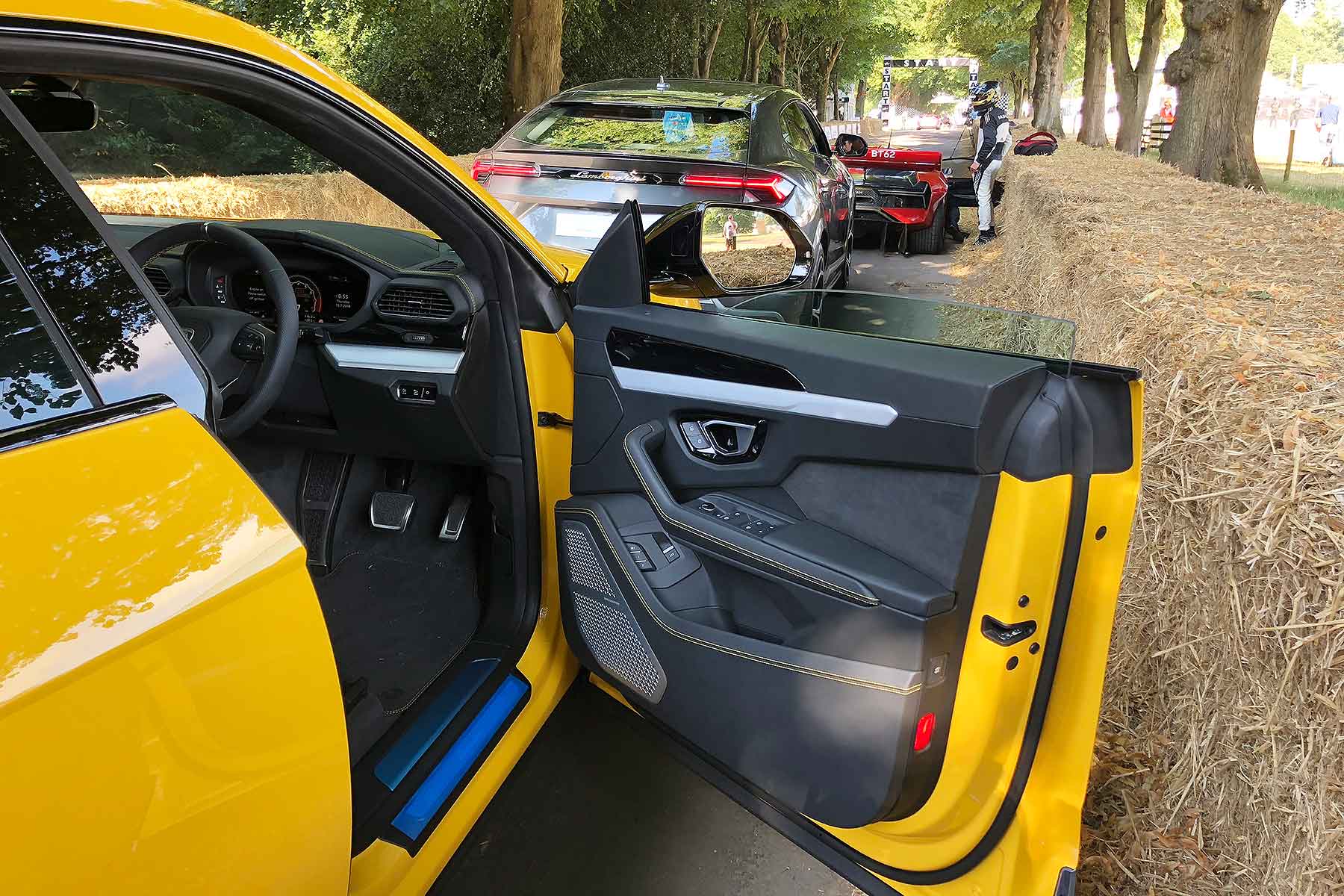 It’s probably always going to be a novelty to accelerate so quickly while sat up so high, with a howling soundtrack in the background to keep you awake. The Urus is very much on the bold side of the SUV spectrum. To those coming from almost any other vehicle, it will feel like they’ve stepped into a genuine Lamborghini. This is less toning down a Lambo, and more spicing up an SUV.

I’m not going to tell you much about ride and handling because hey, it was 1.16 miles. But I can tell you the Urus is pleasingly responsible, swiftly changes direction to a steering input rather than hesitating and keeling over, and generally feels a lot lighter and tighter on its feet than I was expecting.

I was making ‘it’s an SUV’ compensations in my drive that I didn’t need to make. They all say that, yes, but I really could have gone a lot quicker, and not felt like I was killing the car doing so.

Then we were at the top, with just enough time to contrast a Caterham’s 13-inch wheels with the Lambo’s 22-inch rims, clock how cool the bucket-style seats are inside, and realise owners will be turning heads in one of these for years to come. Then I headed back down the hill, waving to the crowds. 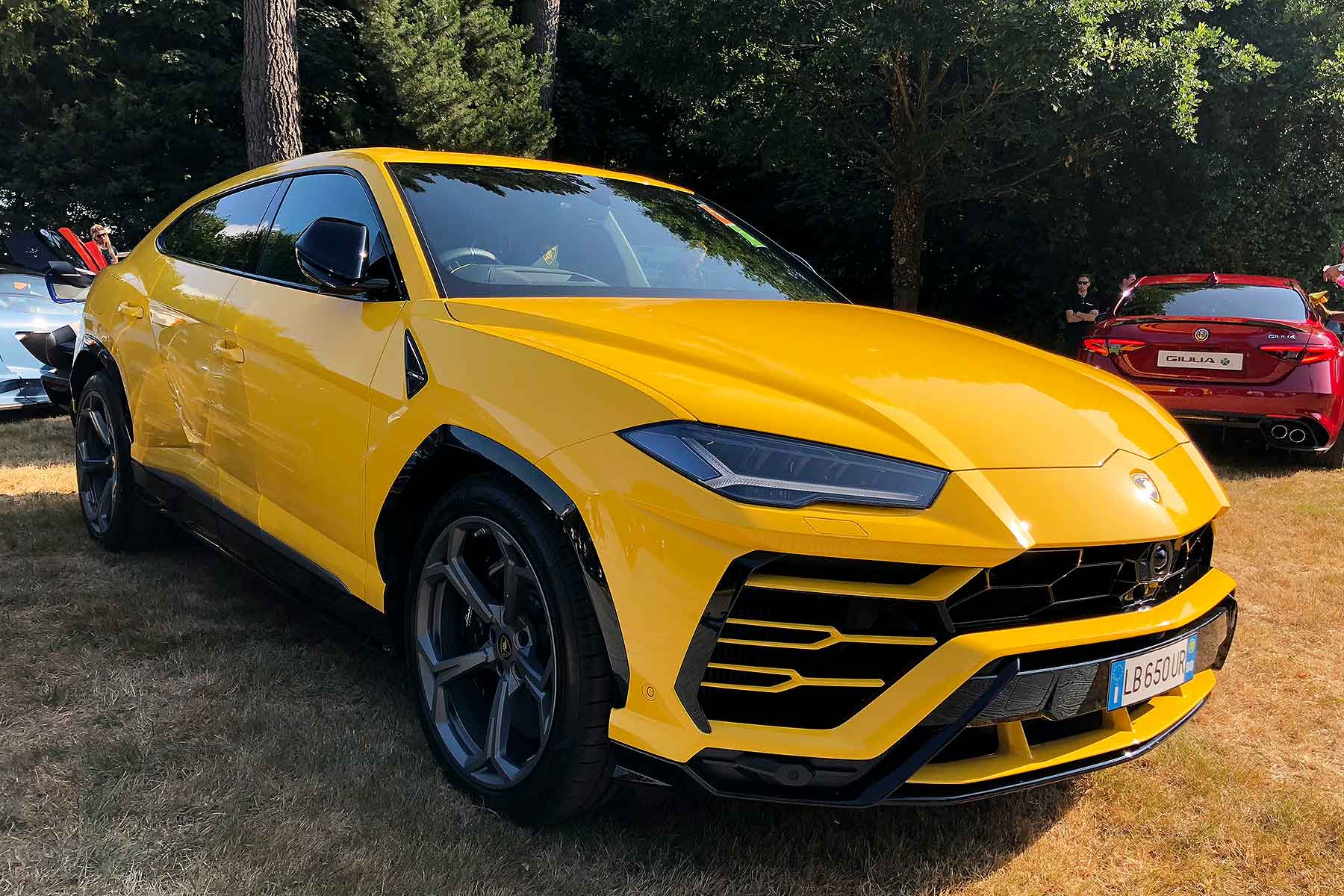 I arrived back now fully awake. That was good fun. I got up, didn’t crash, put on a show and will appear in a few Instagram and Snapchat posts. I’ll also look forward to driving the Urus a bit more in the UK, because it might just turn out to be less of a behemoth and more of an authentic Lambo that we may think.