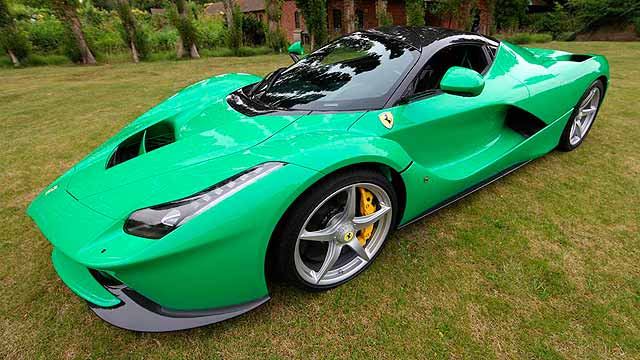 Jay Kay’s green LaFerrari will be exhibited at the Salon Privé supercar show at Syon Park next month, giving Londoners a rare opportunity to see the unique car up close.

To be shown in the Salon Privé invite-only Hypercar Pavilion, Jay Kay’s green LaFerrari will join other exclusive hypercars including the Koenigsegg One:1, McLaren P1, Pagani Huayra and Ruf CTR3 Clubsport.

The one-of-499 LaFerrari, which cost the Jamiroquai star £1.2 million, is likely to be the feature draw of the glittering hypercar line-up when Salon Privé doors open on 3 September.

“I’ve been watching this car and going down to the factory and chatted with Flavio Manzoni , the designer of the car, and Luca [de Montezemolo, Ferrari chairman] a few times,” said Kay.

“I remember about two years ago speaking to Luca about it and he said how it looked like a jet and they are still going through development. But the great thing about Ferrari is that every single thing on the car is doing something. It’s not for show.”

Neither, indeed, is his car itself: the millionaire musician is, unlike so many other LaFerrari owners, actually using his car as intended. This is sure to draw fans to The British Supercar Show part of the Salon Privé event, which will run on Friday 5 September.

Entry won’t be cheap, though: Salon Privé tickets are still available, but prices start from £195 plus VAT. But the entry price does include Pommery Champagne, lobster lunch, free bar and English afternoon tea…