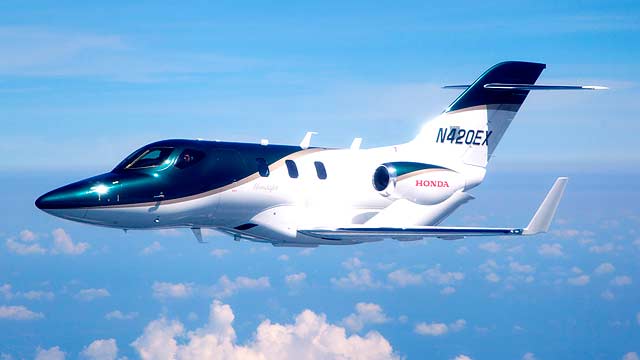 Honda’s groundbreaking new HondaJet aircraft has achieved another milestone – the company reports it has now completed its first-ever flight.

The HondaJet took off and landed at Honda Aircraft’s HQ in Greensboro, North Carolina. The firm even reports “a smooth landing” at the Piedmont Triad International Airport.

It wasn’t a brief, token flight either: the HondaJet flet for 84 minutes and climbed to 15,500 feet; it also reached a top speed of 348 Knots True Air Speed (that’s an impressive 400mph).

“With this first flight, the program has entered an exciting phase as we prepare for delivery,” said Honda Aircraft Company president and CEO Michimasa Fujino.

“Today’s celebration is the culmination of extensive engineering and production efforts, and this is an important achievement in bringing the world’s most advanced light jet to market.”

It’s coming to market sooner than you may think as well: the company is targeting aircraft certaification and service entry in 2015 – yes, next year. As such, aircraft production is already underway, with 10 planes on the final assembly line. Sales have already begun in North America and Europe.

“This steady build up supports the company’s objective to have aircraft ready for delivery immediately after Federal Aviation Administration type certification is achieved,” said the firm in a statement.