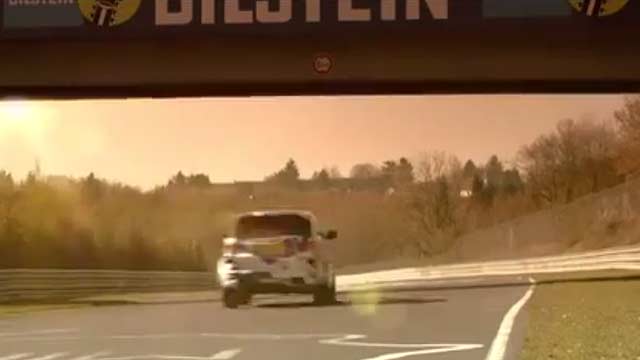 Land Rover has confirmed it is set to launch a high-performance model by releasing a tantalising teaser from the Nurburgring Nordchleife.

The short preview movie shows plenty of the track but little of the car – however, it is believed the bellowing car in question is a new performance version of the Range Rover Sport.

This would probably use the 550hp supercharged 5.0-litre V8 from the Jaguar F-Type R Coupe, and pack a serious set of enhancements to chassis, styling and interior to ensure it looks and drives the part.

JLR development guru Mike Cross says on the video: “We’ve always had a breadth of capability on and off road, but now we’ve added more performance to the mix… a lot more”.

Particular emphasis is placed on the ‘lot’ there…

It is also likely to launch a new Land Rover-Range Rover performance sub-brand – the firm’s equivalent of Jaguar’s R and R-S models.

No more official details are yet available but the firm did reveal we’ll find out more next week on 25th June – and as it’s said it will be bringing its ‘fastest, most agile and most responsive SUV it’s ever guilt to the 2014 Goodwood Festival of Speed’, it seems the hot new Range Rover is set for a bold British reveal.

Watch this space – MR will be among the first to bring you the news… for now, check out the movie short and let us know if you spot (or hear) any clues.