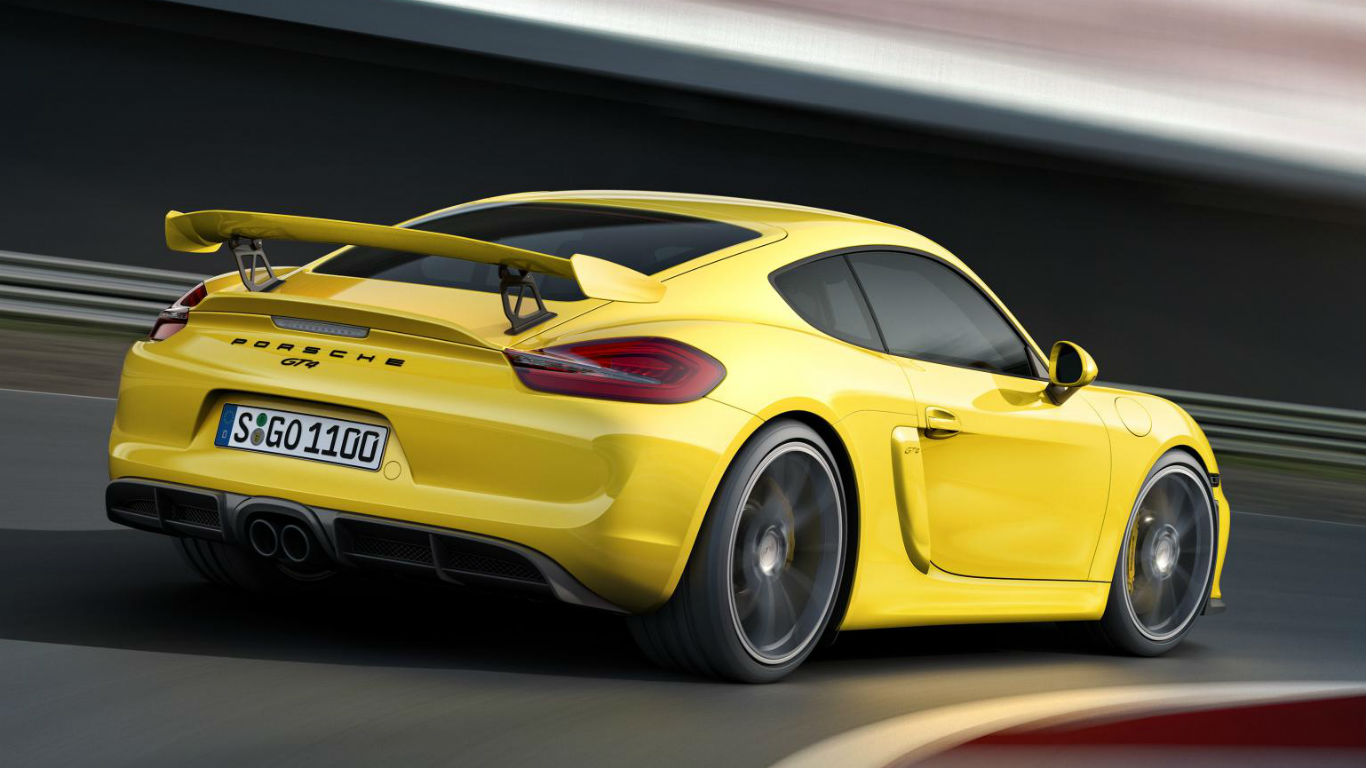 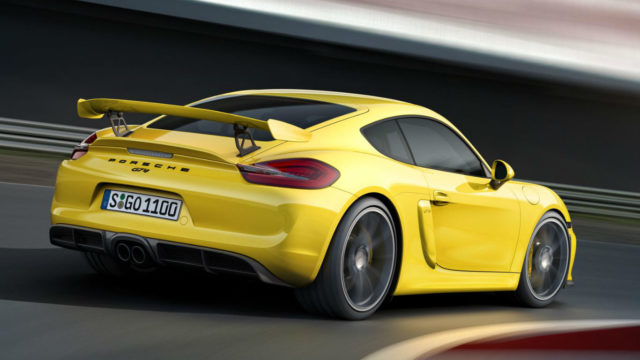 Straight-line speed is all very well, but it’s handling that really defines how a car drives. The interaction between steering, shock absorbers and suspension is a dark art that carmakers spend millions trying to master. However, when they get it right, the result can be unalloyed driving joy. That said, this article isn’t only about cars that handle like go-karts, corner like they’re on rails and (insert other journalistic cliché here). We’ve also included a few that like to go sideways – or suppress cornering forces altogether. Let us know if you agree with our choices. 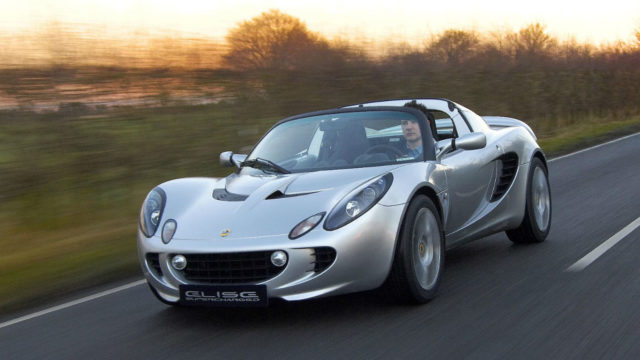 The sheer longevity of the Lotus Elise is testament to its brilliance. Launched in 1996, it has evolved steadily over the past 20 years, growing ever faster and more powerful without losing its purity of purpose. The Elise shows up just how large, heavy and over-complicated most modern cars have become. It’s a no-frills driving machine that will get under your skin faster than a ravenous mosquito. 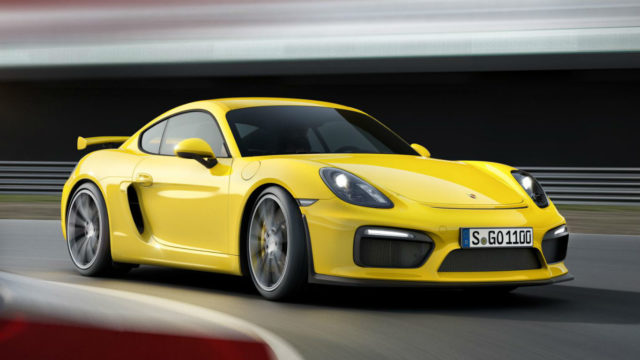 The hardcore Cayman GT4 saw Porsche’s mid-engined coupe emerging from the shadow of its big brother, the 911. For us, it’s the best driver’s Porsche in recent memory, changing direction with an immediacy that’s just the right side of hyperactive. Its compact footprint makes it perfectly-proportioned for UK roads, too. No wonder used GT4s are selling for more than they cost new. 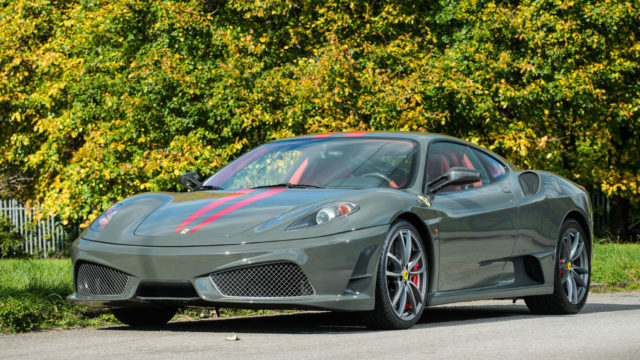 We could have nominated many Ferraris for this list, but the 430 Scuderia – ‘Scud’ to its friends – still stands out. With a stripped-out interior, carbon-ceramic brakes and sticky Pirelli P Zero Corsa tyres, the Scuderia can lap Ferrari’s Fiorano test track as quickly as the Enzo hypercar. It’s a 510hp double espresso on wheels. Bellissma! 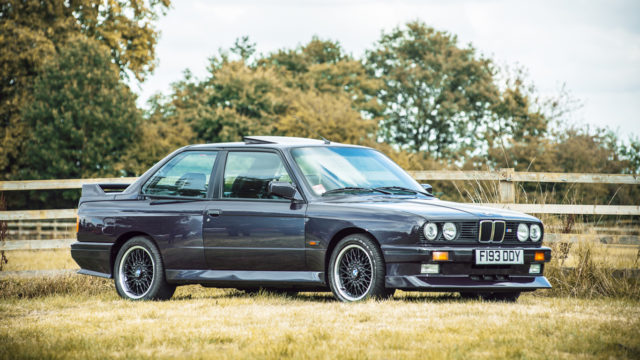 The BMW M3 is now into its fifth generation, so why do enthusiasts still hanker after the 1985-1992 original? The E30 M3 was a homologation special, a car born from BMW’s desire to go racing. That competition pedigree translates into a wonderfully responsive road car, with a dynamic finesse that later M3s lacked. Proof that more power doesn’t necessarily equal more fun. 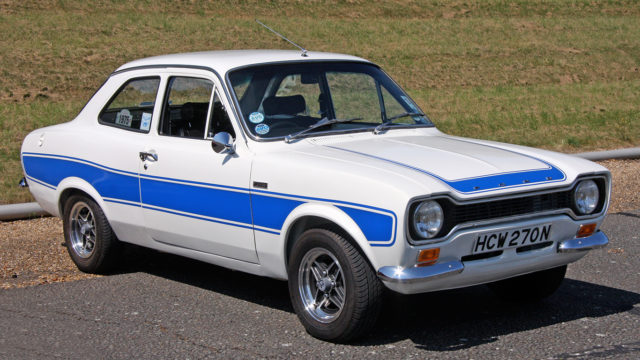 There’s a reason many rally schools still use Mk1 and Mk2 Ford Escorts to teach the basics of rear-wheel-drive handling. Yes, these sporty saloons can often be seen going sideways – be it in McDonalds car park or a Welsh forest at night with Cibiés blazing – but they’re also reassuringly easy to control. With modest power and equally modest grip, you can have fun at any speed. 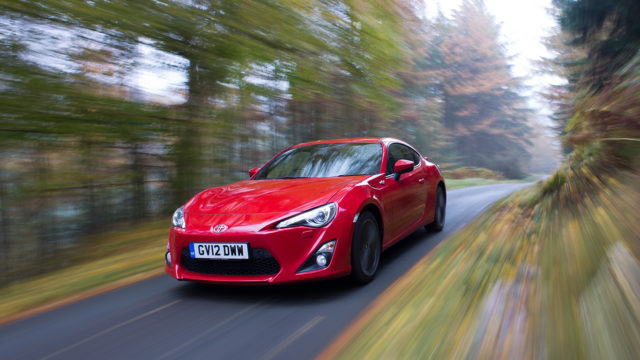 The GT86 and BRZ twins are perhaps the spiritual successors to the classic Escort, although they also hark back to Toyota’s rear-driven Corolla AE86. Again, these are cars you can enjoy at sensible speeds, helped by low-grip ‘eco’ tyres similar to those used on the Prius. Superb steering and brilliantly-balanced handling are the highlights here. 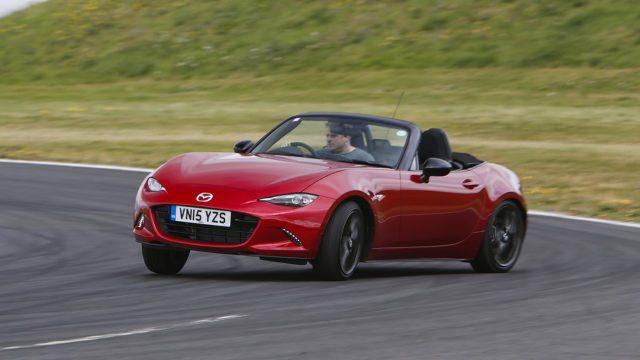 If you’re in the market for a GT86 or BRZ, it seems rude not to consider the MX-5. This latest, fourth-generation take on the world’s best-selling sports car is the best yet. Indeed, smaller dimensions and reduced weight remind us what made the original MX-5 so great: the simple joy of driving one. A car you experience through your fingertips and the seat of your pants, the MX-5 is a feast for the senses. 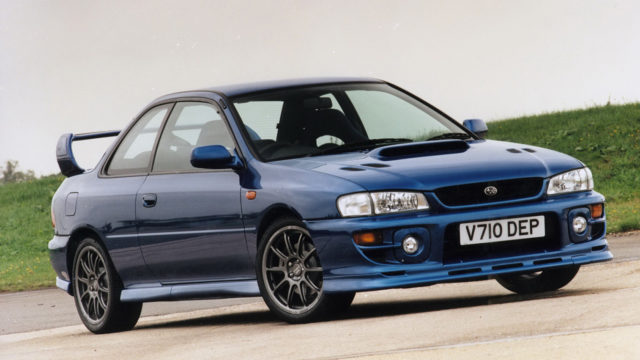 Let’s shift our focus from tail-wagging rear-drivers for a while. Developed by motorsport maestros, Prodrive, the Subaru Impreza P1 is perhaps the finest road-going version of the car Colin McRae used to win the World Rally Championship. With 280hp channelled to all four wheels, it catapults out of corners with a ferocity that makes even a trip to the shops feel like a Kielder special stage. 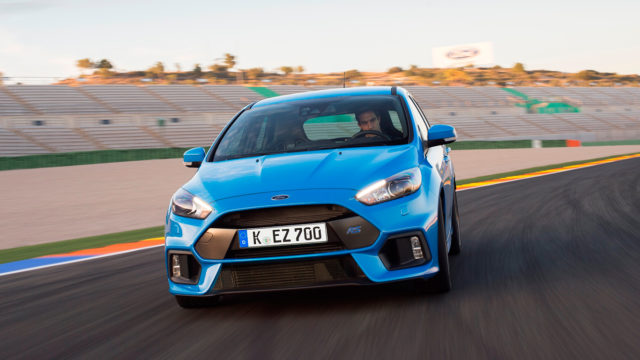 Bringing the Impreza P1 formula bang-up-to-date is the latest Focus RS. Ford’s hottest hatch has trick front suspension to quell torque steer, plus a chassis with the uncanny ability to make the  four-wheel-drive RS feel like a rear-wheel-drive sports car. It also has something called Drift Mode, which is essentially a button that makes the car go sideways. What’s not to like about that? 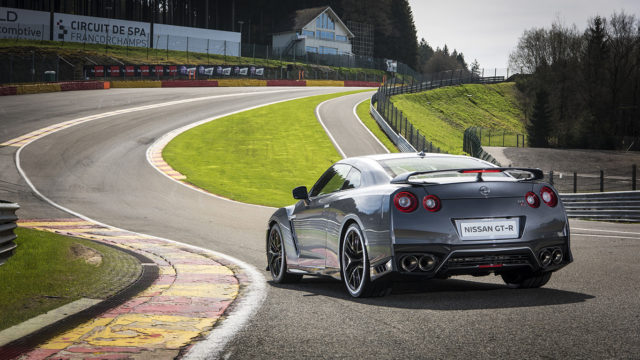 The daddy of 4WD performance cars is, of course, the Nissan GT-R. Revamped for 2017 with 570hp, this is the original supercar-slayer – the beast the Japanese call ‘Godzilla’. Unlike many rivals, however, the GT-R is also very easy to drive. Its seating position is upright, ride comfort is better than you might expect and the control weights won’t scare somebody more used to a Micra. For average drivers (and we’re including ourselves here), nothing is faster. 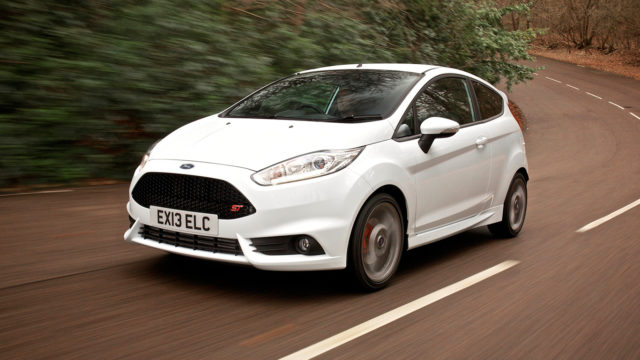 Power to the people! Driving fun doesn’t come much more affordable than the brilliant Fiesta ST. If any car currently on sale lives up to that ‘go-kart handling’ cliché, this is it. The ST changes direction like an overexcited puppy, and you’ll do well to suppress your inner boy/girl racer behind the wheel. Mark our words, this car will soon be ranked alongside the Peugeot 205 GTI in the hot hatch hall of fame. 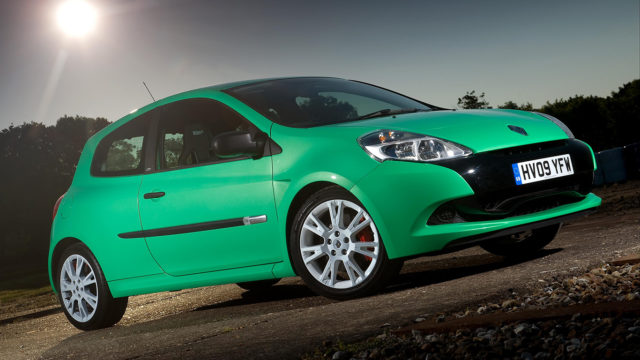 Did somebody mention the 205 GTI? We’ll have a Clio Cup instead, thanks. The Renault is vastly cheaper to buy than the fast-appreciating Pug, which means you won’t have any qualms about thrashing it on your favourite B-road. Choose the stiffer Cup chassis for the ultimate hardcore hatch experience – just don’t expect many creature comforts. 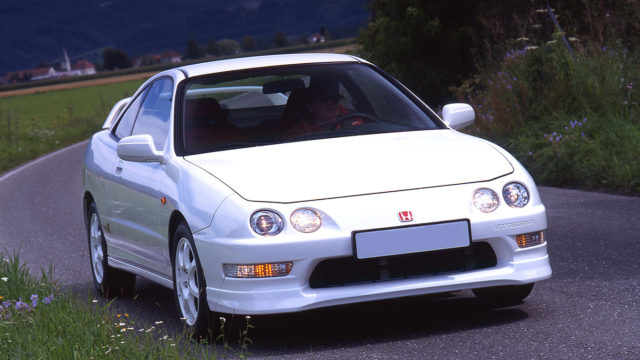 The Integra Type R is another to file under ‘front-wheel-drive legends’. Like the E30 M3 mentioned earlier, it’s a car designed for the racetrack first and the road second. Extreme weight-saving measures include thinner glass and the removal of the spare wheel cover, while a limited-slip diff ensures excellent traction. Prices for the Type R are now rising fast – a sign of the high esteem in which this homologation hero is held. 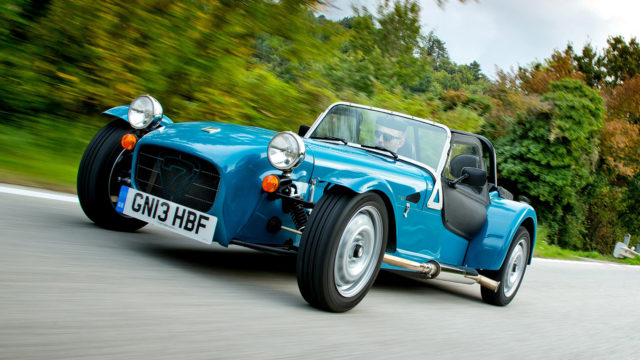 A rollerskate with an engine, the Caterham Seven makes a Fiesta feel like an articulated lorry. This is driving distilled: a steering wheel the size of a Playstation controller, a manual gearbox… and not much else. Higher-spec Sevens are ferociously fast, but the entry-level, three-cylinder 160 is still fabulous fun. Sevens are great track-day cars, too. 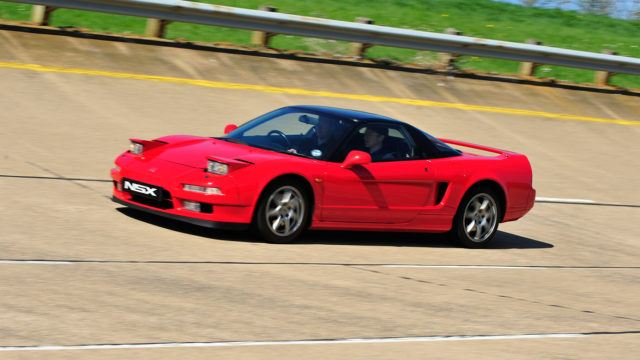 The adjective ‘game-changing’ is over-used, but applies 100% to the Honda NSX. The New Sportscar eXperimental proved supercars don’t need to be unreliable or difficult to drive. Yet it’s just as thrilling as any Ferrari or Lamborghini when its mid-mounted VTEC V6 screams to a heady 8,000rpm. Ayrton Senna helped develop the NSX’s chassis and his racing nous really shows on the road. It’s immediate, intuitive and, above all, wonderfully analogue. 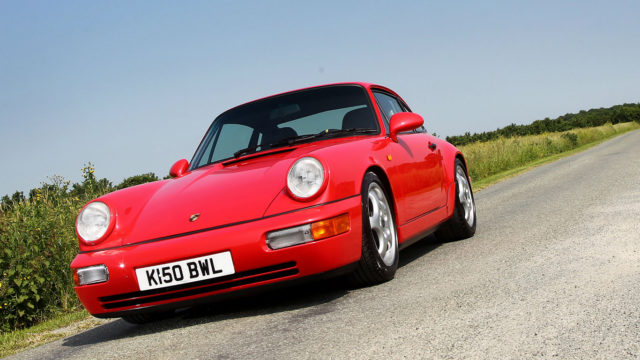 You can be sure of three things when it comes to Rennsport Porsches. Firstly, they will be very expensive – even second-hand. Secondly, they will have silly fabric door handles that are supposed to save weight. And thirdly, they will be sensationally good to drive. The 1992 964 RS is our pick of the bunch. It’s a barely-disguised Carrera Cup racing car that needs to be handled with care, especially in the wet. But boy, is it exciting. 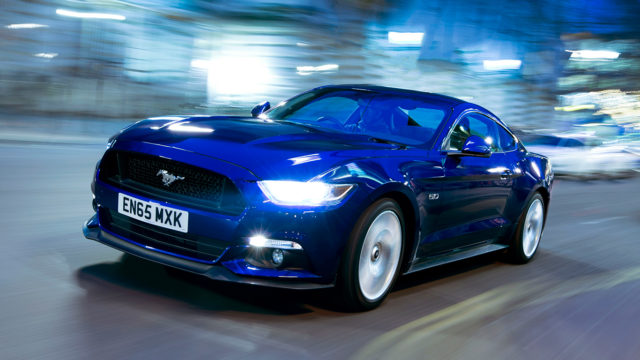 Ford has made Mustangs since 1965, yet they’ve always been better suited to boulevards than B-roads. That changed with the latest (2015-) ’Stang – a pony car with independent rear suspension to take on its European rivals. Granted, the Mustang is still no Lotus Elise, but if a tyre-smokin’ surfeit of grunt over grip is your thing, walk this way. 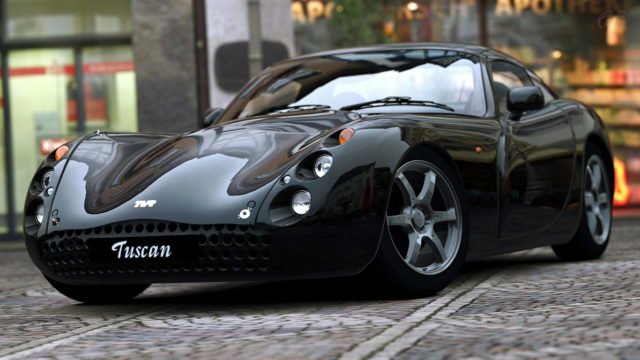 If you’ve taken up smoking (of rubber, not tobacco) few products will satisfy your cravings better than the TVR Tuscan Speed Six. Built from 2000-2006, this British brute had a lightweight glassfibre body and a muscular straight-six driving the rear wheels. However, the Tuscan isn’t all power and no poise; it’s an exciting and rewarding drive for those brave enough to take the plunge. 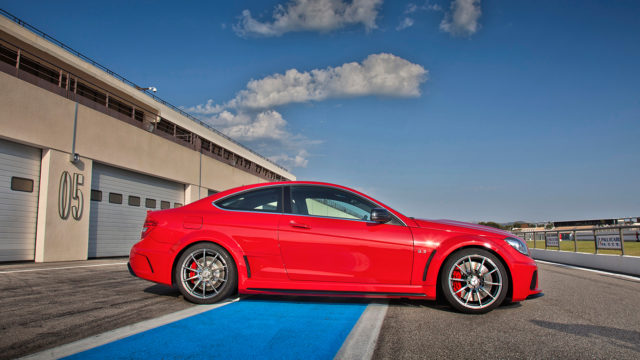 There are few glorious ways to use up our planet’s precious resources than a C63 Black Series. With motorsport-inspired suspension and a 517hp 6.2-litre V8 that sounds like God gargling, this factory-built hot rod will make you giggle like a seven-year-old on a bouncy castle. Actually, the bouncy castle is a bad analogy because the ‘Black’ feels utterly glued to the road. Unless you unstick it with the throttle, of course… 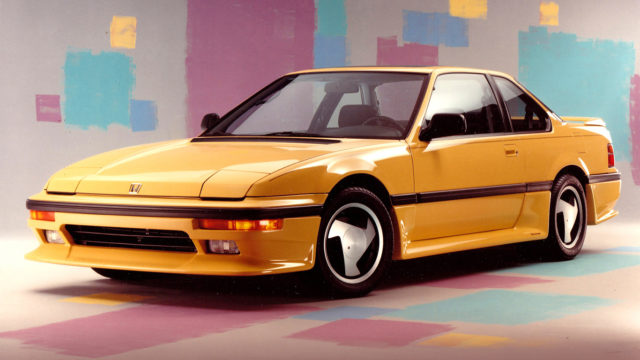 One of the giants of motoring journalism, LJK Setright, was a big fan of the Honda Prelude. Asked what he’d include in his dream garage, Setright said: “I would select the four-wheel steer Prelude, simply because no other car is as nice to drive. Wanting nothing but the very best, one would have to import the Japanese version of the VTEC, equipped with automatic transmission and limited-slip differential.” 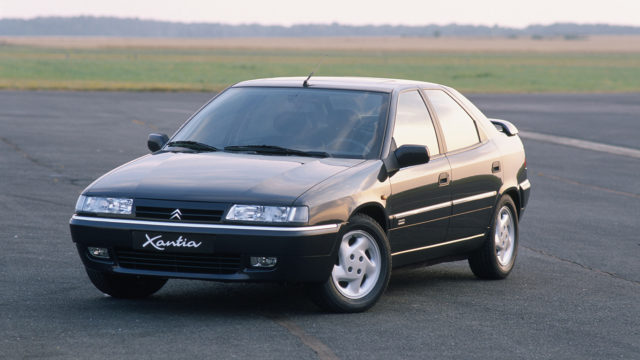 An old Citroen with complex, computer-controlled suspension? What could possibly go wrong? But find an Activa in good working order and it remains a thing of wonder. Hydraulic rams eliminate body-roll altogether, while also reducing squat/dive when accelerating/braking. The result is slightly unnerving at first, but your passengers will love the smooth-riding serenity of it all. 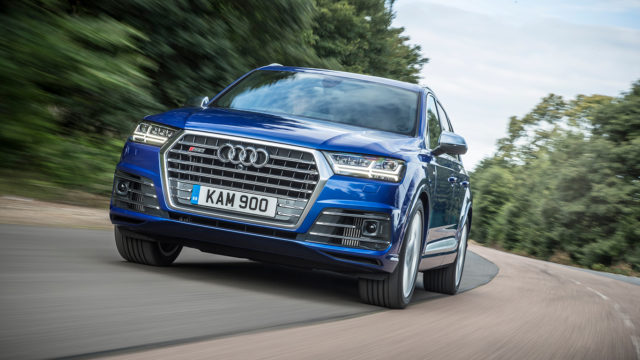 The SQ7 is a modern take on the Xantia Activa, made all the more remarkable because it weighs 2.3 tonnes (nearly twice as much as the Citroen). Powered by a supplementary 48-volt electrical system, an electric motor deploys up to 885lb ft of torque to stiffen the anti-roll bars, making make this seven-seat SUV feel like a hot hatch. Talk about having your Black Forest gateau and eating it. 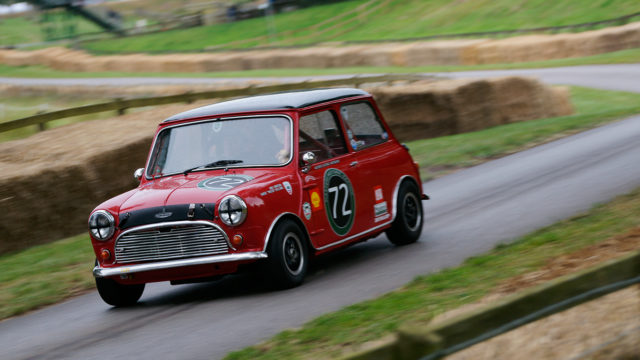 Scroll through the drive modes in a modern MINI and you’ll find one labelled ‘Sport: for maximum go-kart feel’ (yep, there’s that cliché again). Brilliant handling was one reason for the original Mini’s incredible success, too – both on road and rally stage. It’s impossible to drive one without grinning ear-to-ear. A 1960s Cooper would be our dream-garage choice, but even a basic 848cc Mini is fabulous fun. 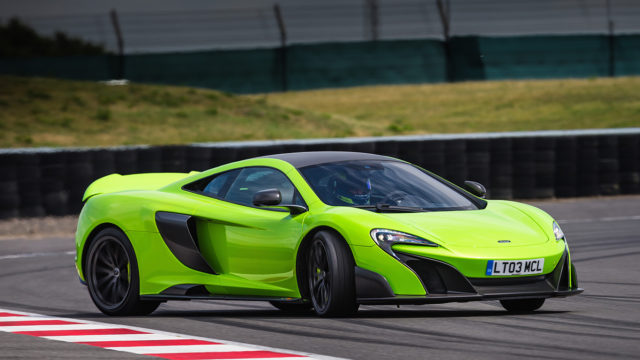 Former Top Gear host Chris Evans was so impressed by McLaren’s 675hp supercar, he spent his own money on one. That’s strong praise from a man with a serious Ferrari fetish. Those who’ve driven both cars say the 675LT shades even the mighty McLaren P1 for driver excitement. It’s monstrously powerful, yet confidence-inspiringly capable. To quote our own Richard Aucock, the big Mac is “two or three levels above most supercars”. 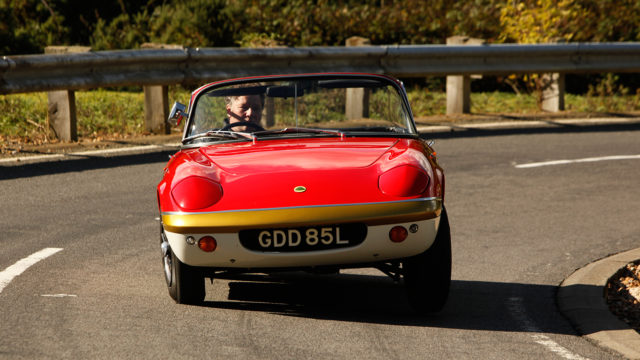 We started with the Elise, so it seems fitting to end with the Elan. The car that inspired the Mazda MX-5 is oh-so-pretty, yet absolutely tiny in the metal. Unassisted steering, independent suspension and super-skinny tyres telegraph every detail of the road surface, allowing you to exploit its modest limits with joyous abandon. More than 50 years on, has anyone made a better sports car than the Lotus Elan?