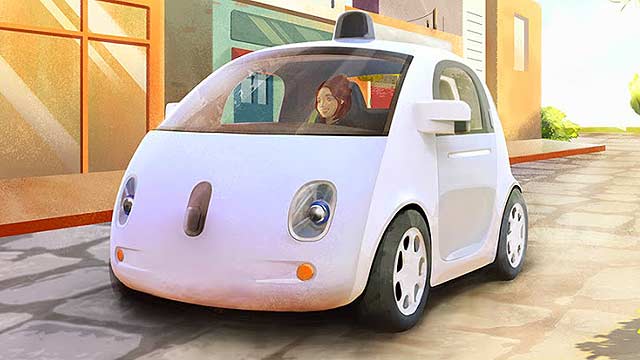 Internet giant Google has announced it will bring its self-driving cars to the roads with a self-designed vehicle, rather than a converted version of a car from an existing car manufacturer.

This means that Google will become a car maker in its own right – and thus offer a surprise new challenge to the automotive establishment.

Google will begin with 100 prototype vehicles, which will start testing later this summer: much sooner than many expected.

“If all goes well, we’d like to run a small pilot program here in California in the next couple of years”, said Chris Urmson, director of the Google Self-Driving Car Project.

Google’s designed its new car to look friendly and cartoonish, rather than ape traditional car styling. It’s a monospace design with the Google sensors integrated into the car’s features (although the roof-mounted one is hard to conceal…).

Inside the Google Car, there will be no driving controls, simply a stop and go button: ‘just press go’, says Google (although the initial batch of test cars will have manual controls too).

The all-electric cars will be limited to around 25mph at first. The city-bound models will run on Google Maps and not only drive themselves but do so extremely safely: sensors remove blind spots and “they can detect objects out to a distance of more than two football fields in all directions”.

They will seat two people.

Longer term, it’s not clear if Google plans to become a volume car manufacturer. “If the technology develops as we hope,” said Urmson, “we’ll work with partners to bring this technology into the world safely.”

This suggests that Google could licence the self-driving car technology to existing car manufacturers, as an add-on extra. Meaning that even if Google doesn’t become a car manufacturer, it will almost certainly become an automotive supplier – and a potentially very powerful one at that…