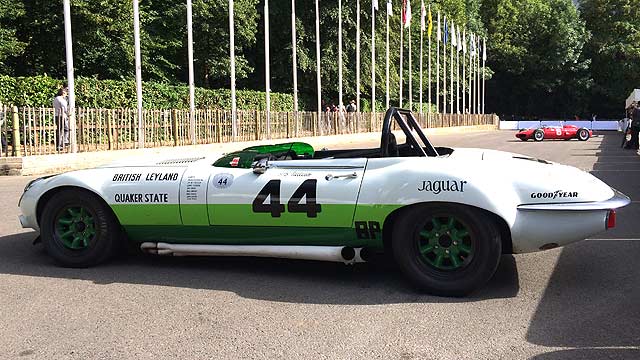 The Jaguar E-type Group 44 racer is a 450hp racer that competed in the 1974 Group B production car championship of the Sports Car Club of America. And on Saturday, I was driving it up the hill.

Earlier tweets by Chris Harris had got me excited: the colourscheme and period logos, the side-exit exhausts, the apparent noise. It was an absolute monster, by all accounts. So after a bit of to-and-fro between signing on and scrutineering, I was ready to go.

Helmet and overalls on, I climbed over the rollcage into the remarkably unsubstantial period-spec bucket (think plastic airport seat with harnesses), had a brief runthrough of the stripped-bare E-type interior, and waited. 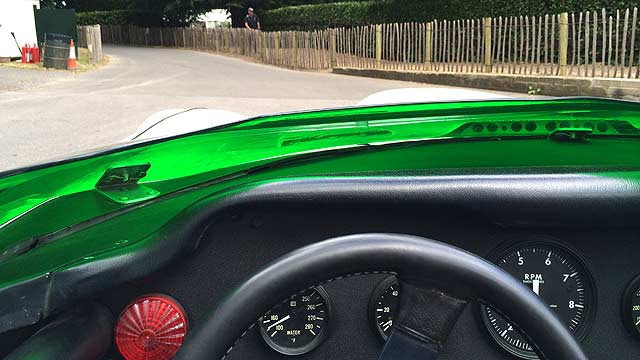 It was deeply cool: I sat high, looking over the green plastic ‘visor’ over the iconic E-type bonnet, feeling like one of those James Bond franchise stunt drivers who sit on the top of Land Rover Defenders while Daniel Craig does the driving duty below.

No such advantage here: it was me that would have the battle the race-winning, 10 times’ championship-winning Jaguar’s humungous V12 and four-speed ‘box. On slicks. With rainclouds threatening above.

At least the controls were simple – the only dials to watch were revs (not above 4500rpm, please) and water temperature (if it went above 200 degrees, flick the blue fan switch: yup, it was in Fahrenheit). I had a play: the clutch was incredibly heavy, the gearchange long-gaited, the seat hard and thoroughly uncomfortable each time I moved, but otherwise it wasn’t *that* intimidating.

But, this wait – what was causing it? Nerves had subsided and I was now itching to go. In the paddock of just two, we both stared at the marshalls, tweaked our helmet straps, then realised we weren’t going anywhere so got out our phones. To, er, watch footage of Sir Chris Hoy spearing into the hay bales. Nerves were back. This was not ideal preparation.

That explained the delay, though, so it was encouraging when cars started rorting up the hill again. Wouldn’t be long. It was visors down again. Silence. They must be at the top, and soon trickling back into the pits to free hill space for us. They were not, it turned out. They were waiting at the top while the aftermath of Anthony Reid’s smack of the flint wall was cleared up. Yes, really.

This was not good. Particularly as the owner of the Aston Martin Reid drove was in the pits with us, receiving details of the crash on his mobile. It was uncomfortable, painful to watch. His face drained. He switched into recovery mode and stoically arranged the recovery trucks. And then darted off, clearly both heartbroken and already mentally adding up the repair bill. We all felt for him.

The marshall came over with an update. It was a mess, but they were clearing it up, and we’d be out soon – probably the last run, as they had to prepare the hill for the Goodwood Ball taxis (think Mercedes-Benz S-Class, Rolls-Royce and Audi A8, rather than Skoda Octavia and Toyota Avensis).

And then it turned truly bizarre…

Music to our ears cleared our heads – cars going back up. Now this time it surely wouldn’t be long. A few went up, then silence: clearly, the rest of the group really was was now at the top and about to come back down. But they didn’t come back down. Surely it couldn’t be…

Yup, it was. A marshall came over and earnestly addressed us all. Someone else has gone off. There’s oil on the hill and a lot of clearing up to do. It’s been red flagged. And that’s it for the day – no more runs. No drive for me. All I could do was take it back to the pit and park it up, unhillclimb’d. Gutted.

My only 2014 Goodwood FoS driving experience was thus turning on the fuel pump and cranking the monstrous, flame-spitting V12 into life, hearing a fighter jet-like sound through my helmet, snicking it into first, stalling the fuel-rich motor only once and then discovering that, despite the tiny steering wheel and general Gerry Marshallness of it all, it had power steering and was as easy to manoeuvre as a Skoda Citigo. 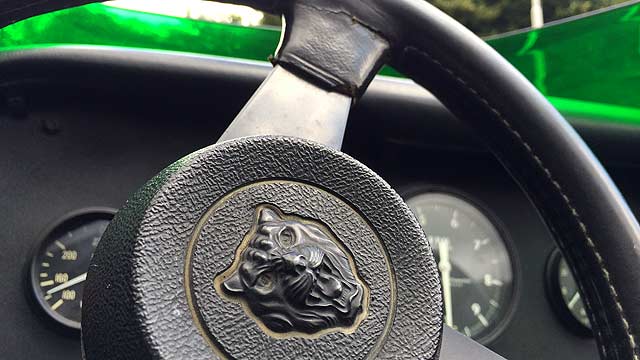 The noise, I swear, probably could be heard throughout Goodwood. It was an honour to drive it 30 yards and manhandling it up the hill would have been fantastic. But it was not to be. Three crashes in half the hours ensured I would not get the chance. Maybe next year.

“At least you got sort of a drive,” said a fellow writer standing next to the D-type he was due to drive in the group due to go out after me…