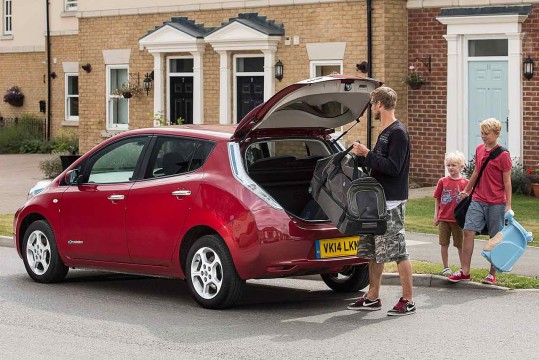 Using Ultra low emission vehicles (ULEVs) for the school run could save motorists up to £440 million a year, according to campaign group, Go Ultra Low.

The startling figure comes as millions of children return to school for the new autumn term and an equal number of parents start facing the horror of the school run. Sadly, an ULEV may be quieter and save you money, but it can’t do anything about the congestion!

Go Ultra Low claims parents will make 1.3 billion journeys doing the daily pick-up and drop-off, with the average school run in England being 3.8 miles. Perfect for an electric vehicle, even with the air conditioning switched on, the heated seats on max and a smartphone plugged in to the USB port.

It’s estimated* that 410 million litres of petrol or diesel will be required to fuel the nation’s school runs, at a total cost of £530 million. If these journeys were made in 100% electric vehicles, the fuel cost would amount to less than a fifth of this at £94 million.

Go Ultra Low suggests this could save drivers as much as £440 million a year if they switched to an ULEV, although this doesn’t take into account the cost of the car or the monthly battery lease.

Launched earlier in 2014, Go Ultra Low helps consumers understand the cost savings and performance features of the range of low emission vehicles, with the campaign backed by BMW, Nissan, Renault, Toyota and Vauxhall.

There’s little doubt that the school run would be a quieter and cleaner place to be if parents switched to electric vehicles, but just how many families would be prepared to give up their SUV or MPV in favour of a smaller electric car?

As things stand, the Mitsubishi Outlander PHEV is arguably the best choice for an active family looking for a clean school run SUV. It costs the same as the diesel equivalent and offers a claimed 32.5 miles of pure electric running.

*Savings are based on an average fuel consumption of 50mpg and running costs based on a Nissan Leaf at 1.75p/mile and a range of 124 miles. The figures are also based on the British Gas Clear & Simple Economy 7 tariff and seven hours of night time charging and one hour daytime.