Lorry levy brings in £17 million since introduction in April 2014 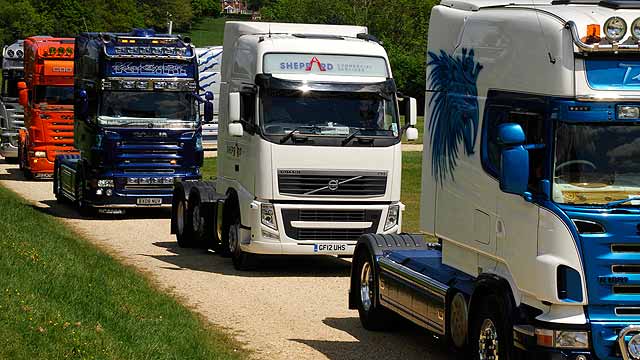 Foreign truckers have contributed to more than £17 million in lorry levies raised since the introduction of the government’s new ‘fair deal’ HGV charge in April 2014 – and ministers admit revenue raised is soaring well ahead of predictions.

The HGV road user levy was introduced to ensure British truckers weren’t penalised by competition from foreign trucks. Previously, explained Transport Minister Robert Goodwill, there was the “ridiculous situation” of foreign trucks filling up abroad, using British roads and then departing – “without giving a penny” to the British economy.

“Meanwhile British hauliers were effectively operating at a disadvantage. I’m glad to see this levy has addressed that imbalance.”

Levvies purchased to date total more than 618,000, with truckers from 76 different countries purchasing one since April. The £17 million raised is equivalent to maintaining and powering 170,000 streetlights, paying for 3400 electric car grants… or, yes, fixing 320,000 potholes.

The introduction of the levy has pleased the Freight Transport Association. Spokesman James Hookham said: “UK road freight operators have consistently argued that foreign-registered HGVs operating in the UK should contribute to their use of our roads.

“The HGV levy ensures this, and in so doing helps those domestic UK hauliers who are in direct competition with foreign carriers for loads.

How much is the HGV road user levy?

British lorry drivers are not exempt from the levy, but they pay it when buying vehicle excise duty, which helps minimise costs.

Although more than 95% of British hauliers are paying it, DVSA enforcement officers have found 850 trucks who haven’t paid it during roadside checks: this alone has raised more than £250,000.

Initial government estimates, said Goodwill, was that the levy would bring in around £20 million a year. At current rates, it will actually bring in more than two and a half times that figure. Not bad for a so-called ‘fair deal’ tax.

Since its relaunch in 2004, the cars have been flying out showrooms
Read more

The government has launched a 10-week consultation on a proposed ban on old tyres for buses, coaches, minibuses and lorries
Read more

The majority of motorists back the EU’s proposal to make the fitment of breathalysers in cars mandatory from 2022.
Read more

Which are the new cars in each sector that offer the best crash safety?
Read more