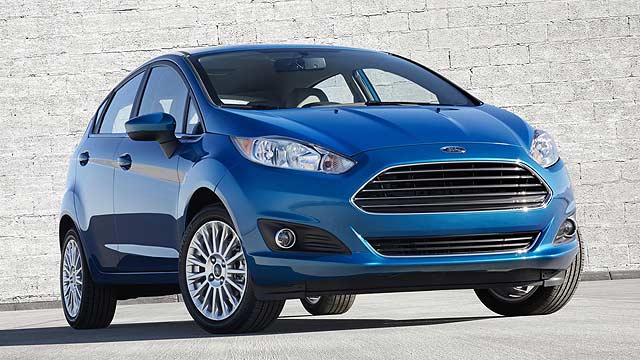 Ford has issued revised official fuel consumption figures for six big-selling models in the US – and it’s a DOWNWARD revision for all of them.

Models affected by the change in EPA fuel economy figures include the Ford Fiesta, and Ford C-Max, models which are also sold in the UK. However, as European cars are assessed using the alternative NEDC test regime, and tested in Europe rather than the US, it is unlikely that official UK fuel consumption figures will be affected.

Ford global vice president of product development Raj Nair blamed an “error in the testing process” which affected 2013 and 2014 hybrid and plug-in hybrid models, “plus most versions of the 2014 Fiesta”.

The revisions will see average fuel economy fall by between 1-7mpg (US); the Lincoln MKZ Hybrid sees the biggest fall, dropping from 45mpg to 38mpg. This means Ford’s launch claim that the MKZ Hybrid is “the most fuel-efficient luxury hybrid in America” is no longer valid…

US fuel economy tests by EPA

In the US, new car fuel consumption is tested the laboratory by testing body the EPA. To mimic real-world driving conditions, a rolling road loading called Total Road Load Horsepower is applied. This is “a vehicle-specific resistance level used in laboratory testing that determines fuel economy ratings”.

These loads are validated on the road for accuracy: in Ford’s case, the road load horsepower was not consistent with the engineering model – “this was our mistake, plain and simple” said Nair.

It’s not the first time Ford has had to revise official fuel consumption figures. Last year, the firm had to issue new figures for the C-Max Hybrid, after it incorrectly used an ‘equivalency’ label.

The firm tested the Fusion Hybrid and applied this mpg to the C-Max Hybrid which uses the same drivetrain. As the C-Max has worse aerodynamics than the smoother Fusion, this was deemed incorrect. The C-Max was assessed individually and a 43mpg official economy figure awarded.