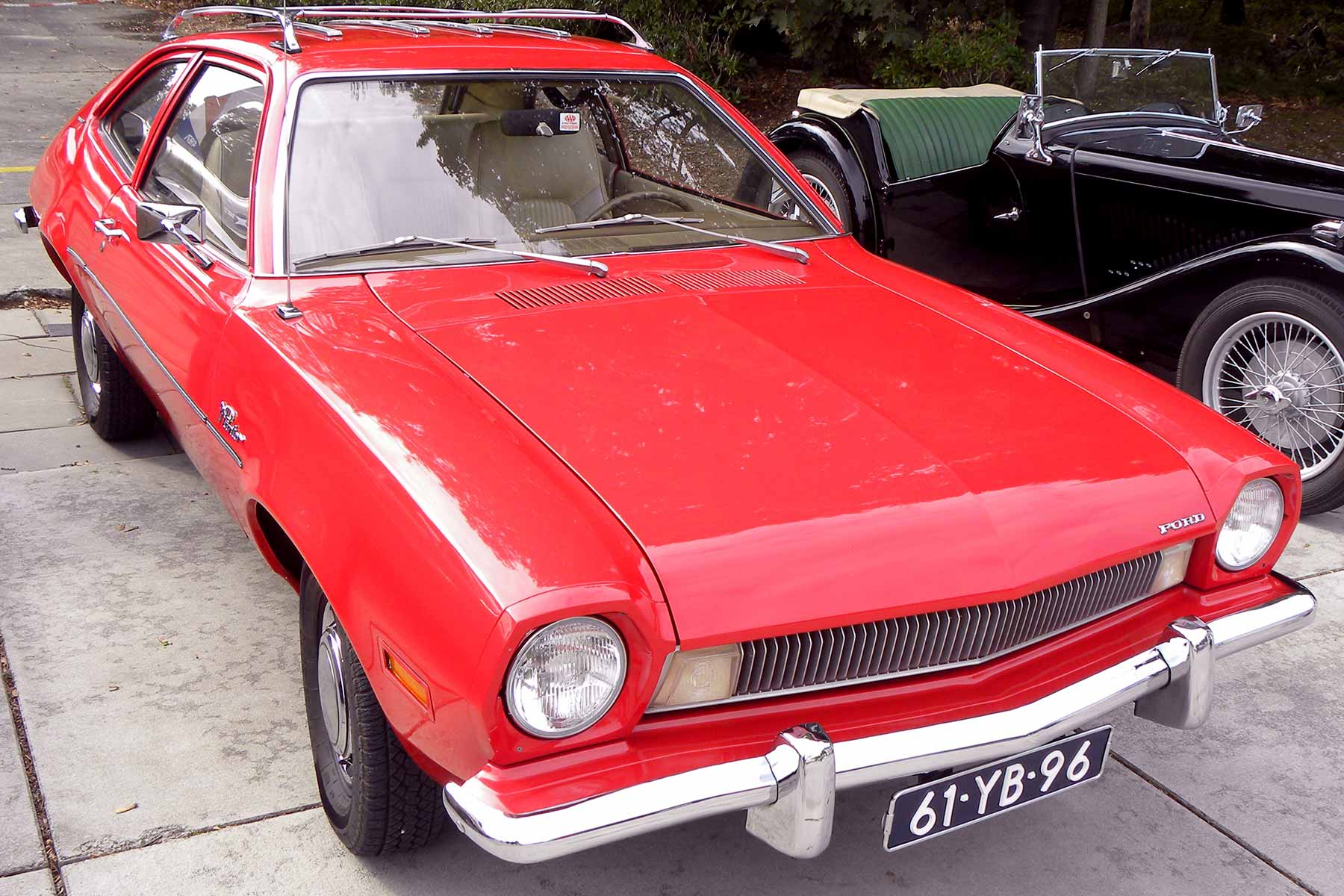 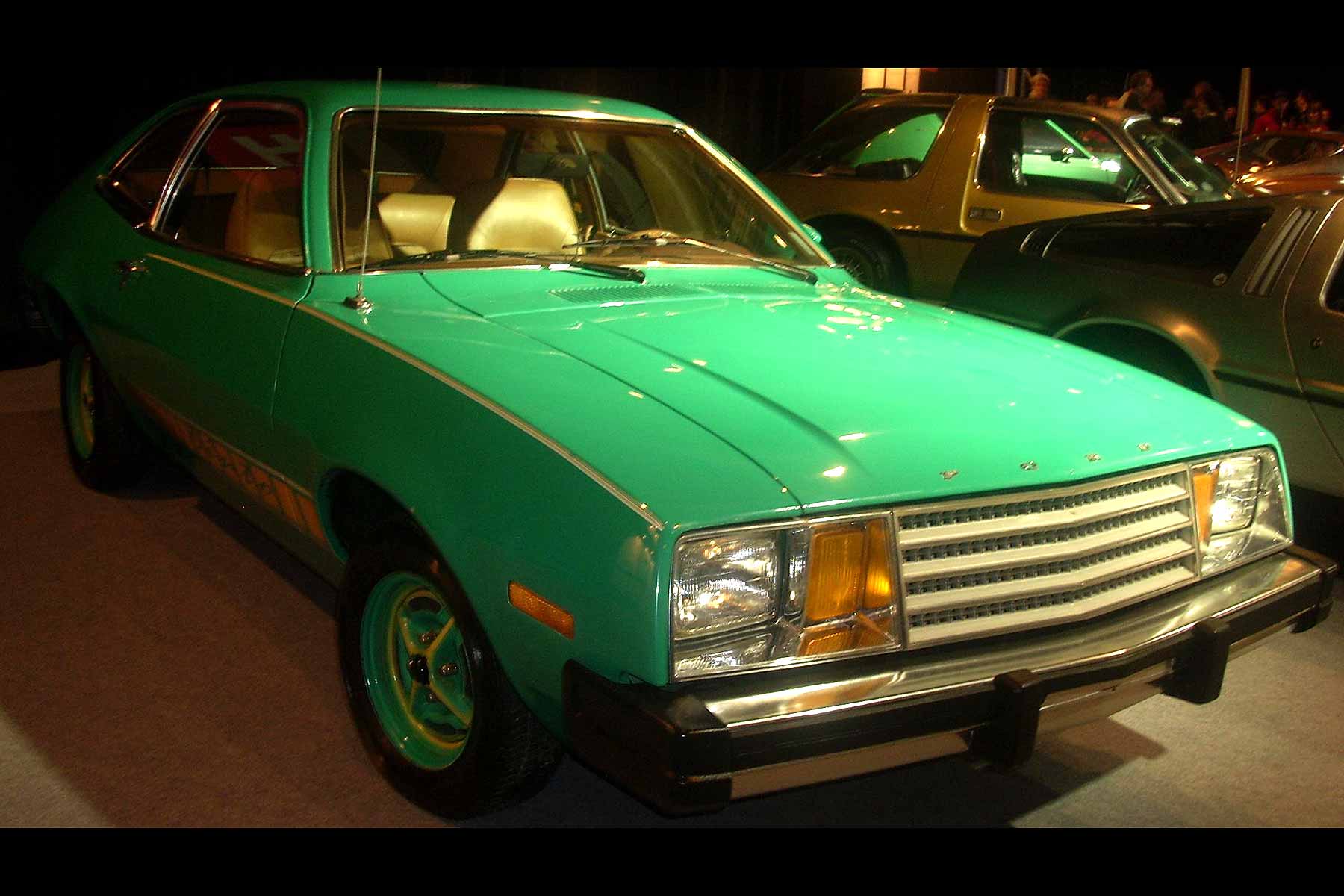 Ford called it ‘The Little Carefree Car’. And a few years after its 1970 launch, there was good reason to suppose that a similarly cavalier attitude had prevailed during the Pinto’s amazingly short 22 month gestation period.

But that firestorm would come later.

The Ford Pinto was built to be affordable. Lee Iacocca, the Blue Oval’s ebullient executive vice-president and the so-called father of the Mustang, had in 1968 asked his designers and engineers for a 2,000lb sub-compact costing under $2000.

Detroit had finally woken up to the rapidly swelling volume of small imports, the ubiquitous VW Beetle joined by a fast-fattening stream of invaders from Japan.

Tiny American Motors jumped into the sub-compact market first with the riskily-named Gremlin, whose startling guillotined tail had appeared six months earlier than the Pinto. Arch-rival Chevrolet, meanwhile, debuted the pretty Vega one day before the Ford as a spoiler.

Ford’s revenge lay beneath the Vega’s bonnet, its much boasted-about all-aluminium engine vibrating hard enough to shake its carburettor loose. Which at least brought the torture to a close.

This was not the first time that Detroit had taken on the imports with cheap cars – the late ‘50s saw the launch of the Ford Falcon, Chevy’s rear-engined Corvair and the Chrysler Valiant – but this was the first time it had tackled the task with small, domestically produced cheap cars.

Despite the Pinto’s mechanical crudity – a leaf sprung live axle and drum brakes were as low as Ford could go for the basic version – it had the look of a larger car that had shrunk in the wash.

Its wheelbase might have looked too short for its length, especially when girder-like 5mph bumpers were added, but the Pinto sold fast, finding over 350,000 buyers in the first year alone.

Problems with the Vega’s engine and the retina-freezing weirdness of the Gremlin propelled the Pinto’s sales ever higher, peaking at over 540,000 in 1974. That was the year after the oil crisis erupted, making American buyers keen to buy machines that would get good gas mileage. 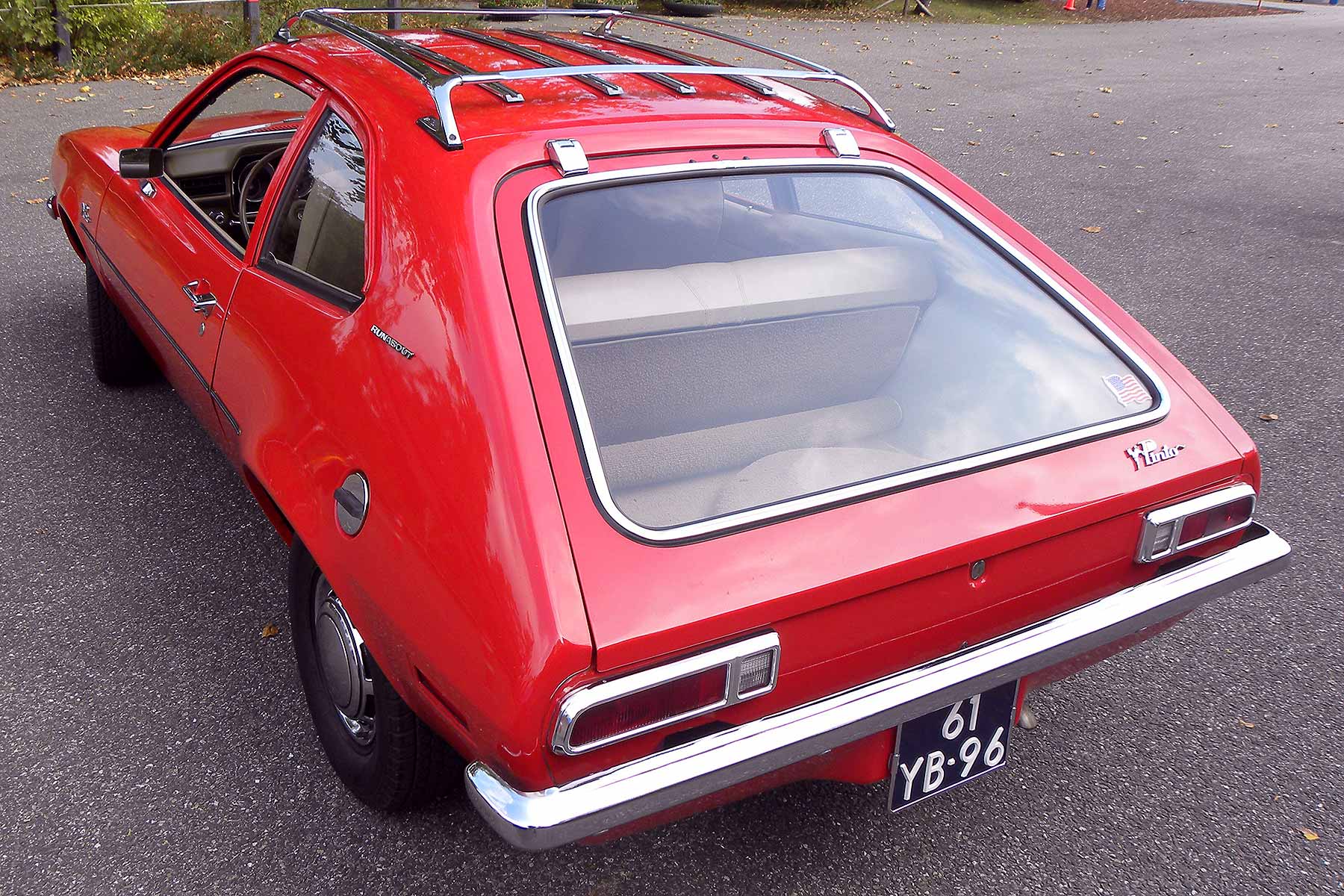 Many of them sensibly looked beyond this simple statistic and chose to buy Honda’s vastly better-engineered Civic, too.

Meanwhile, Ford expanded the range, offering a hatchback version a few months after the two-door’s launch, both sharing the same misleadingly rakish fastback silhouette, for the Pinto was not fast.

Most early examples used European Cortina engines that were praised by the press – unlike the chassis – though that underlines their low expectations as much as it does any Pinto positive.

The Pinto was better equipped to go than it was to stop, and it wasn’t much good at cruising either, preferring to meander along the interstate while reminding occupants of the delicacy of their spine’s via its painfully cheap seats.

Undeterred, a year after launch Ford added an estate, a van and a version called the Cruising Van (they’d never get away with that today) which had trendy bubble windows in its sides, potentially allowing a porthole view of the dissolute activities occurring within.

But it was activities beyond the dissolute that were Ford was soon to appear guilty of. In 1972 a Californian woman was killed when her Pinto was rear-ended and caught fire.

Her passenger, one Richard Grimshaw, survived but with burns to 90 percent of his body.

Unsurprisingly, he sued. And his lawyers discovered that the Pinto’s petrol tank, which was bolted between the rear axle and the back bumper, was prone to rupturing under impact.

In fact, this seemingly vulnerable location was used by plenty of American cars of the day (and European models besides) but the difference in the Pinto’s case was that the fuel filler neck was vulnerable to tearing away from the tank, which was itself prone to being punctured by bolt heads in the back axle.

In some cases, tanks were unloading their volatile load in under a minute.

But what turned out to be more shocking than this was that Ford had known about it when the car was under development. And done nothing. 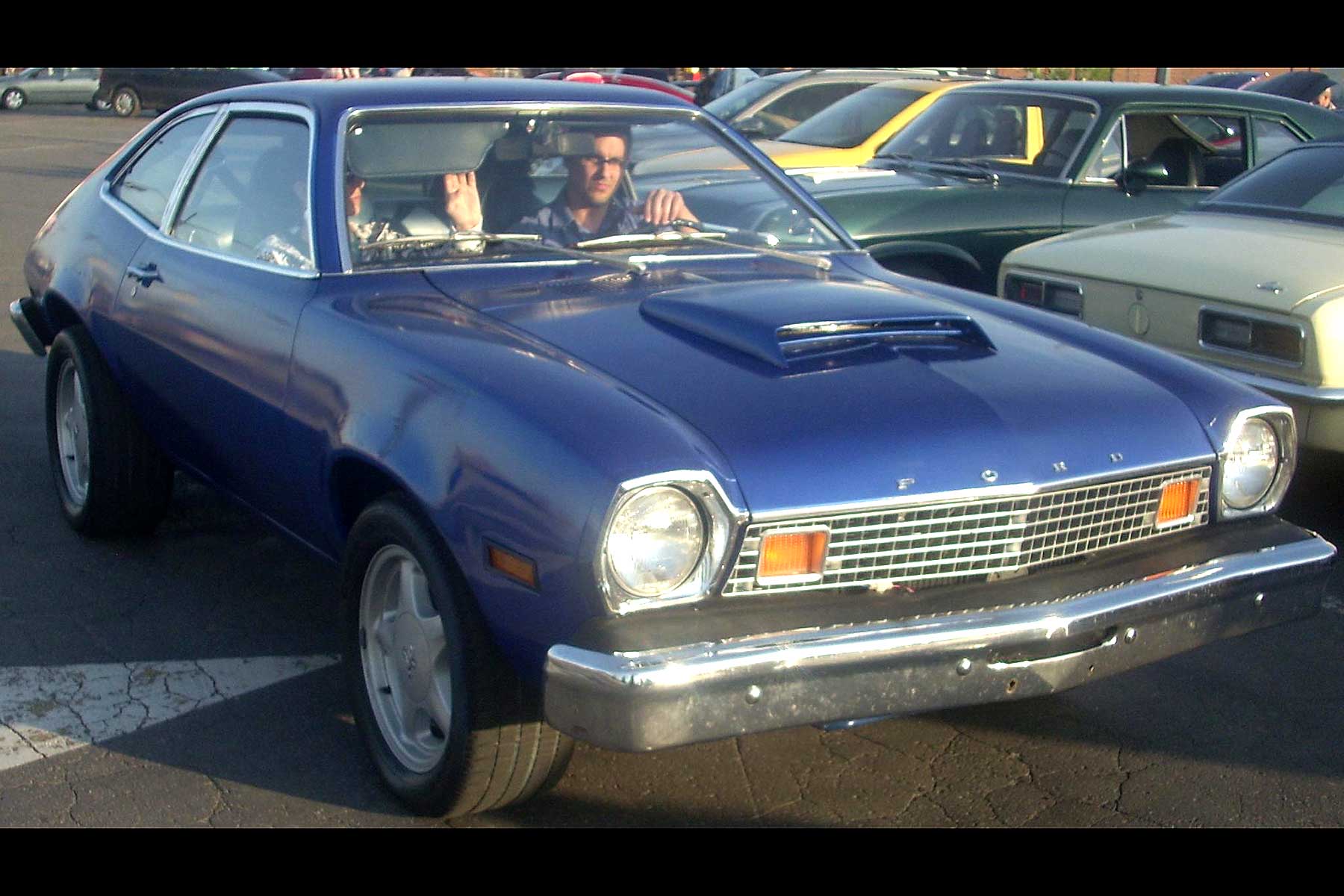 Proof of this emerged in a magazine called Mother Jones, which in 1977 published a story exposing the fact that Ford had performed a cost-benefit analysis on the necessary modifications when the car was under development.

Modifying the car would cost an additional $11 per vehicle, Ford comparing this with the likely injury claims forecast for the death, severe burns and repair costs of pinto accidents.

The bill for re-engineering the cars, the cost of production delays and the extra parts for hundreds of thousands of cars came to $113 million, but the bill for compensation payouts, reckoned Ford, would be $49 million.

So it built the Pinto unaltered.

The documents obtained by Mother Jones came to be known as ‘The Ford Pinto Memo,’ and would often be cited in business ethics case studies. What Ford appeared to have done was attribute a cost to a life, and acted in favour of cost.

Meanwhile Grimshaw was awarded damages of $128 million the following year – reckoned to be all the profit Ford had ever made from the Pinto – although this was later reduced to $6.6m.

But not before three teenage girls had been killed when their rear-ended Pinto caught fire on August 1978. Ford had begun its recall two months earlier, but the family of the girls would not receive their notice until early 1979. 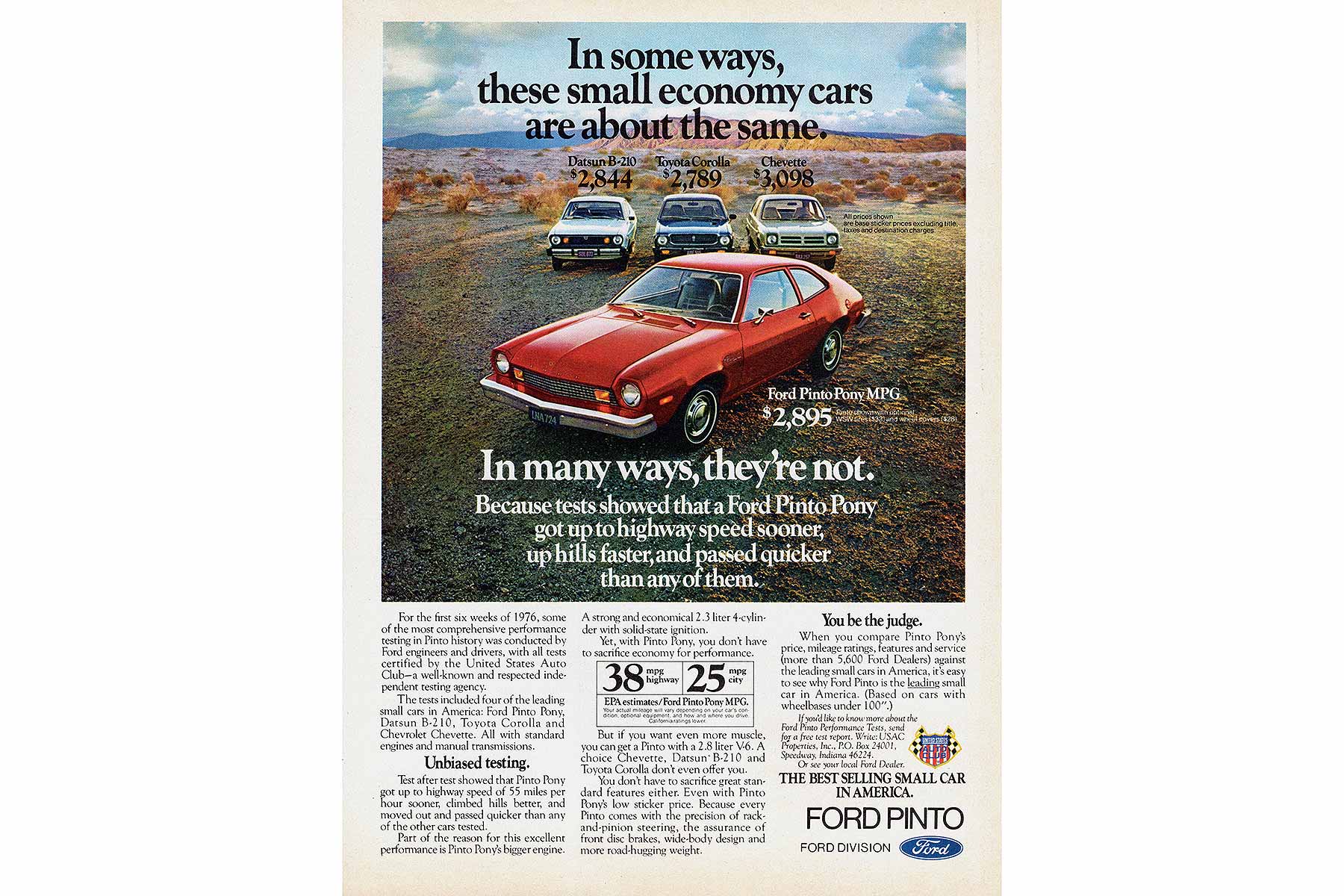 Fires or not, the car was a success, despite the whirlpool of bilious publicity around it. Its notoriety even made feature films, a very gently rear-ended Pinto erupting in flames in ‘National Lampoon’s Animal House’, a memorably taste-free 1978 comedy directed by John Landis.

In subsequent years the Pinto scandal was reassessed, a 1991 paper entitled ‘The Myth of the Ford Pinto case’, produced for the Rutgers Law Review by Gary Schwartz, concluded that the case against Ford was not so cut-and-dried.

Schwartz found that the Pinto Memo hadn’t been used by Ford employees, but was attached to a letter sent to the National Highway Traffic Safety Administration about some proposed regulations.

Schwartz also made the point that the Pinto’s fuel tank location was commonplace, and that the California Supreme Court not only accepted that manufacturers would trade safety for cost, but encouraged them to do so.

Nevertheless, the damage was done. And there was proof that Ford could do a better job within its own range, the fuel tank of Ford of Europe’s similarly-sized Capri less vulnerably located and shielded from the axle.

The Pinto’s unfortunate career continues to resonate, the car cited as one of Time Magazine’s 50 worst cars of all time in 2008.

That no-one wants a Pinto today seems evident in a US eBay search, which turned up just four (mostly miserable) examples of the 3.2 million made. It will probably live a lot longer in law journals.