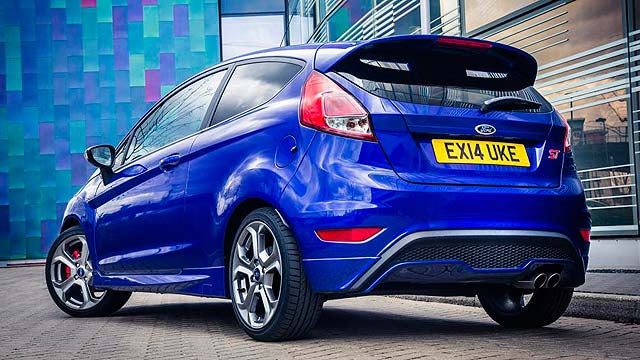 However, it adds a bounty of kit onto the already decent spec of the ST2 – the headliner of which is a Sony stereo with DAB and sat nav. Climate control, cruise control and keyless go are also included.

Ford’s introduced it apparently through customer demand: many of the features it boasts were already offered on the options list. The ST3 is a better value way to get them… and, coincidentally, still costs just £255 more than the base-spec Clio Renaultsport 200 Turbo.

It’s also only £350 more than the base Peugeot 208 GTi, suggesting that Ford possibly underestimated how much people are willing to spend on a sporty supermini hot hatch. Both Peugeot and Renault offer top-end variants costing almost £20,000 each…

So, has Ford judged it right? Will the top-spec Fiesta ST3 end up becoming the best-selling model of all? Fast Ford fans, Disqus your thoughts below…

Ford has finally made the launch of the Fiesta ST3 official, confirming our story above – and revealing the surprise statistic that more than 90% of Fiesta ST sales to date have been the pricier ST2 variant.

“The Fiesta ST3 responds to demand for a higher series model in addition to the previous two specification line-up,” says Ford.

The firm adds that it’s being introduced a year after the ST range was introduced… in which time Ford has sold more than 6,250 units to British hot hatch buyers.

That’s 20% more than it originally forecast!